The Gyrfalcon that occasionally hung out by the Larimer County landfill last winter is back this winter, as occasional as ever. I spent two long, dull, unsuccessful mornings there a year ago but hadn’t been back lately. I decided to try again, but this time, I would do it right. I got up at 5:00 and drove north through Denver in the dark. It was just about sunrise when I arrived at the spot.

There was no Gyrfalcon to greet me. I parked along the road and settled in. In time, three other birds came by and joined me. The thing that makes waiting for a Gyrfalcon so tedious is that there are very few other birds to see in the area. Half a mile off, ravens and gulls swarm around the landfill, but other than that, I saw a House Finch and a magpie in almost four hours.

At 11:00, I took a break and headed into Fort Collins for a disappointing meal at the Waffle Lab restaurant. For a place that specializes in waffles, theirs weren’t very good. And they way over-cooked the bacon.

I headed back to the landfill and spent another 20 minutes, but I wasn’t feeling it. I decided to cut my loses and head south. I stopped at the reservoir in Firestone and saw 15 or 16 Snow Geese mixed in with the enormous number of Canada and Cackling Geese.

Then I headed to South Platte Reservoir to see a pair of Long-tailed Ducks. I saw them earlier in the year, but at that time they were on the far side of the lake, half a mile away. Lately people have been seeing them much closer to the path.

Back when people were allowed to have a sense of humor, Long-tailed Ducks were called Oldsquaws because the noise made by a flock sounds exactly like a bunch of old ladies cackling. But somebody decided that we ought to find that name offensive, so it was changed to the totally uninteresting Long-tailed Duck.

Back when I first began birding, I used to see flocks along the shore of Lake Michigan north of Chicago. They were generally far out, either bobbing on (an usually behind) the waves or flying low over the water. I had to fight the brutal, damp winds of winter to see them. The ones I saw today were easier, and in shirt-sleeve weather too.

It’s a pair. The male is the one with the white crown. They hung very close together. For the first 10 minutes I watched, they repeatedly dove, always within seconds of each other. When they would come back up (again almost at the same time), they would swim close to each other again. After a while, they drifted further away and began preening. 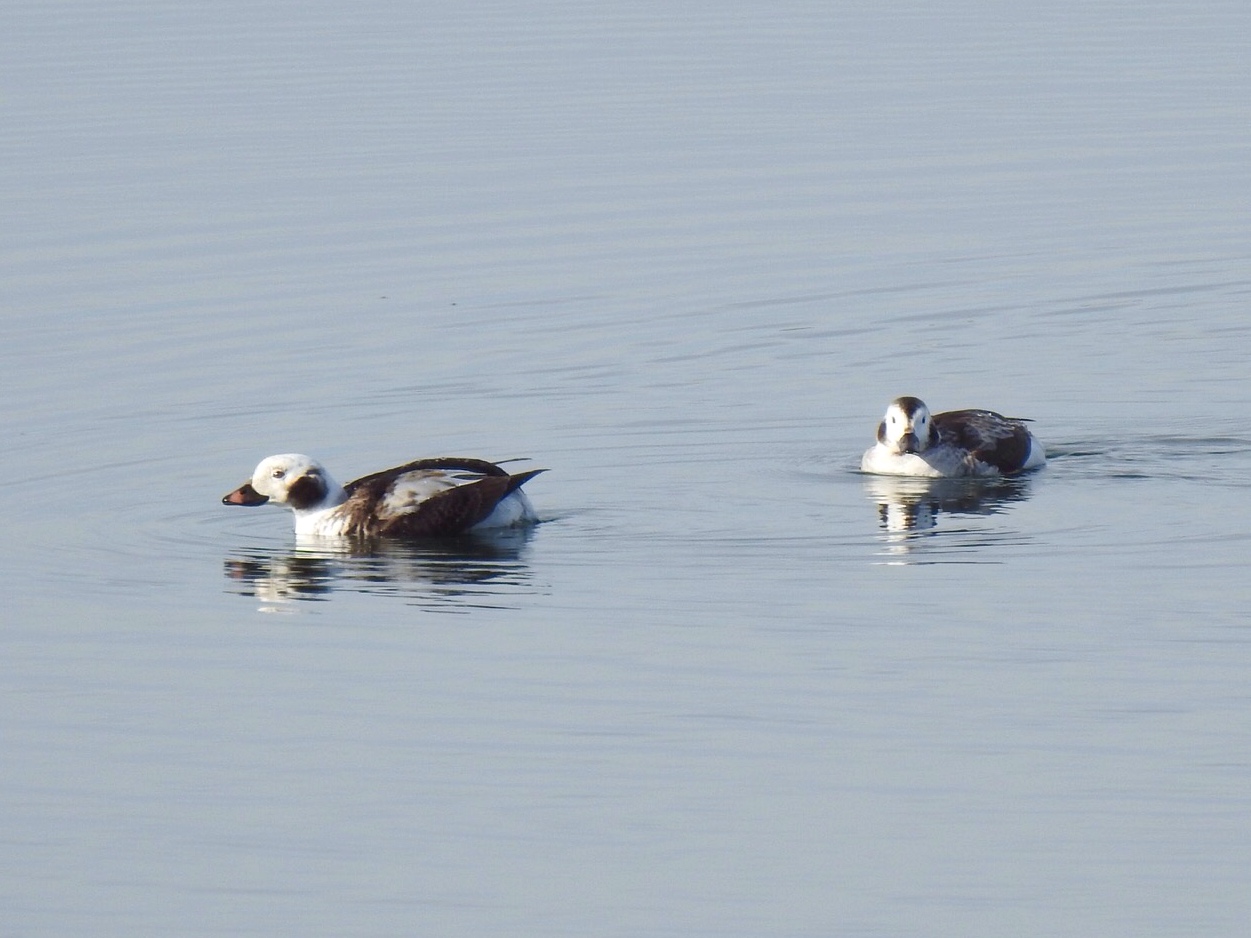 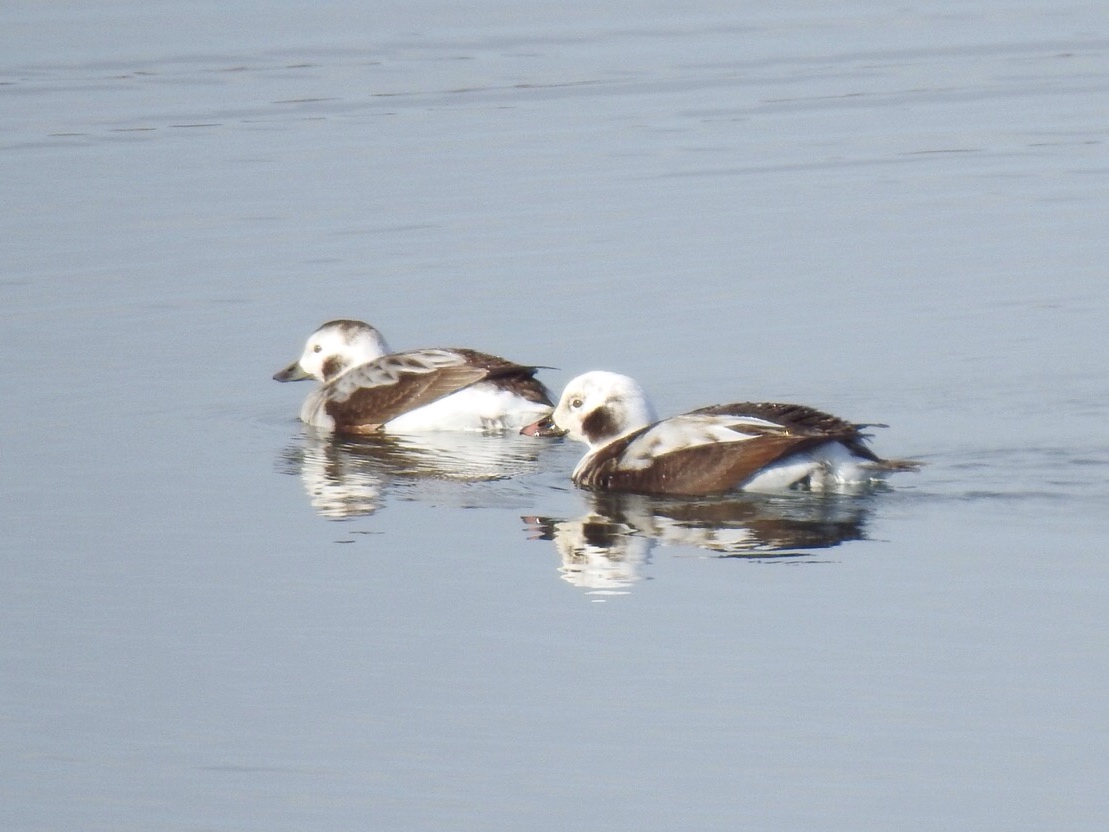 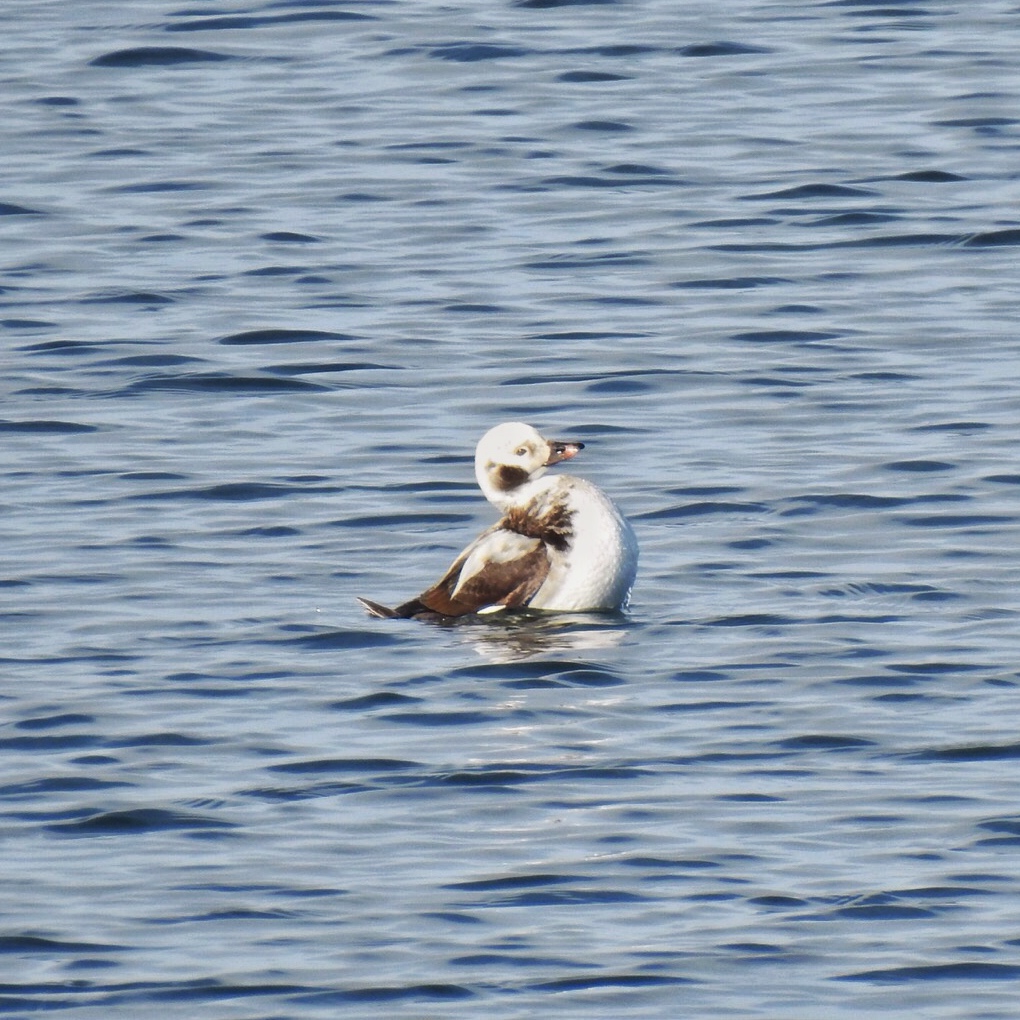