Our room in the Holiday Inn in Alexandria, Minnesota had a complementary rubber duck. 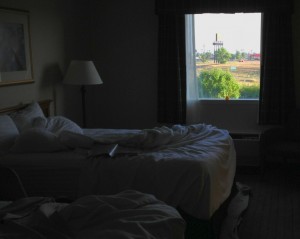 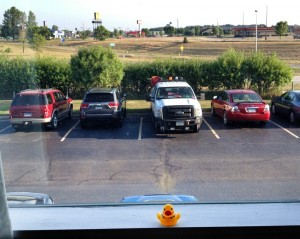 When I decided to stay the night in Alexandria, I checked the web to see if the town had any adventures to offer. Turns out there was one.

In 1898 a Minnesota farmer found a runestone buried on his property — or so he says. The writing on the stone reads “Eight Götalanders and 22 Northmen on (this?) acquisition journey from Vinland far to the west. We had a camp by two (shelters?) one day’s journey north from this stone. We were fishing one day. After we came home, found 10 men red from blood and dead. Ave Maria save from evil. There are 10 men by the inland sea to look after our ships fourteen days journey from this peninsula (or island). Year 1362.”

The locals jumped on board and loudly proclaim their Viking heritage — which is why the local NFL team bears the name. Authorities on such things, on the other hand, point out the decidedly 19th-century style to the writing and proclaim it a hoax.

The original runestone can be seen in a museum. We decided not to hang around town for another hour until it opened and satisfied ourselves with a visit to the runestone monument located at the edge of town.

The town also is home to Big Ole the Viking, created originally in 1965 for the New York World’s Fair. 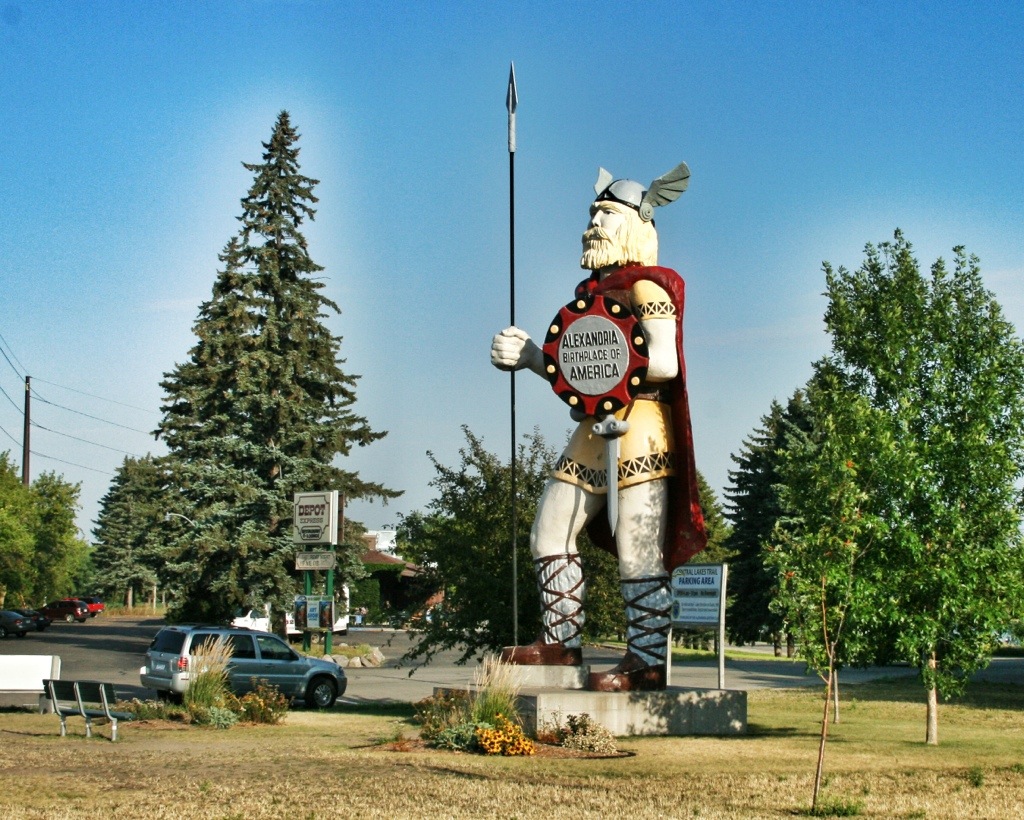 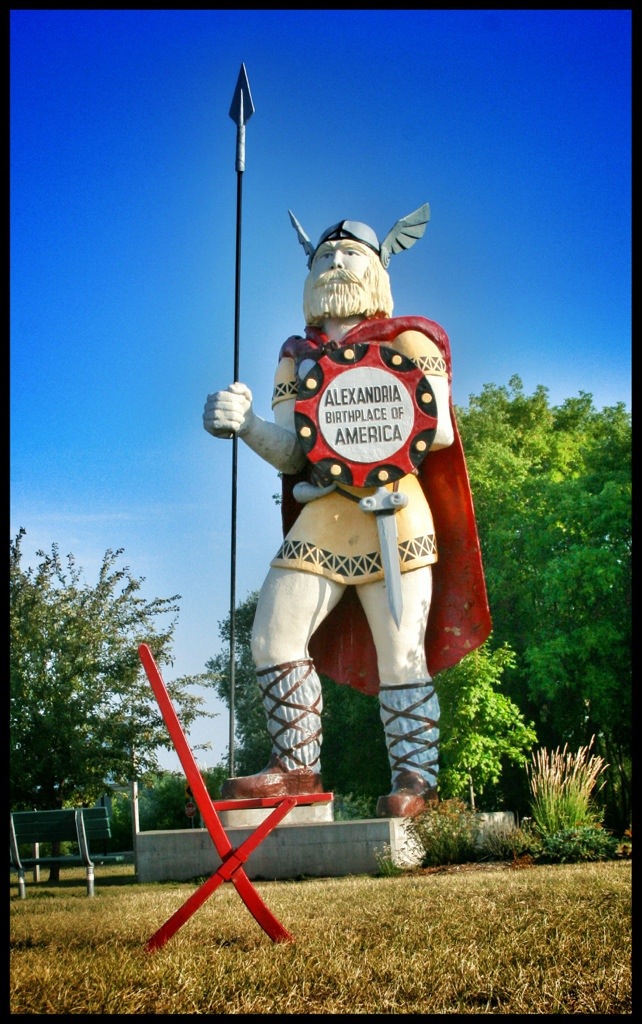 It’s all fun, if a bit silly. After seeing the sights, we went in search of breakfast. We ended up at Jan’s Place, a local diner popular with locals. The decor and food were both mediocre.

Onward, northwest through the farmland of western Minnesota on I-94. 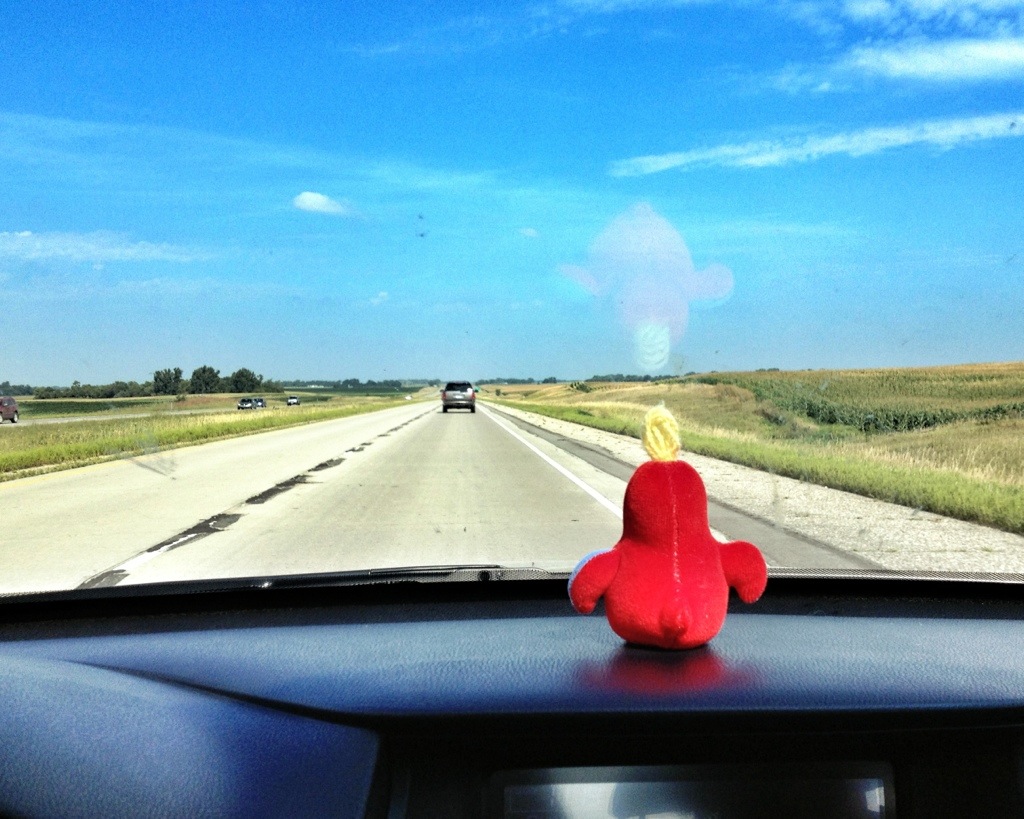 We hit Fargo, North Dakota around noon. There were four things I wanted to do in town.

1. Get a red chair photo by the North Dakota sign.

2. Get a red chair photo with the wood chipper from the movie Fargo.

3. Eat lunch at TNT’s diner, which I heard about on roadfood.com. 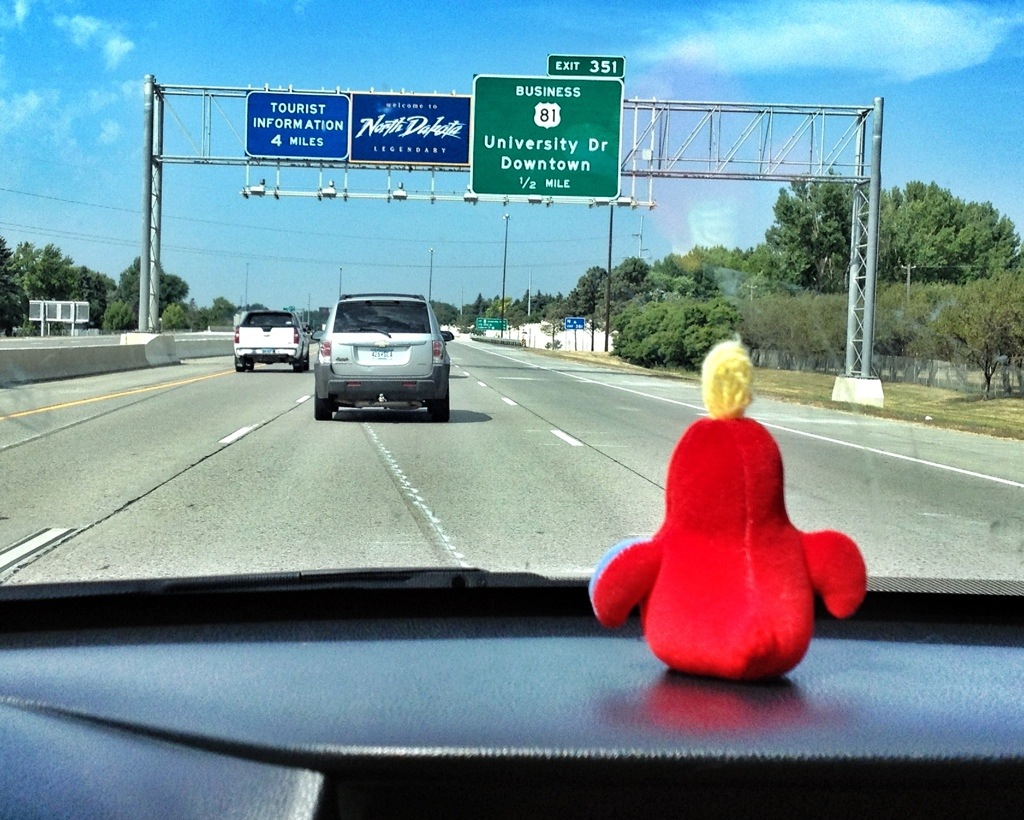 We drove on to the Fargo-Moorehead Visitors Center and found the wood chipper as advertised. 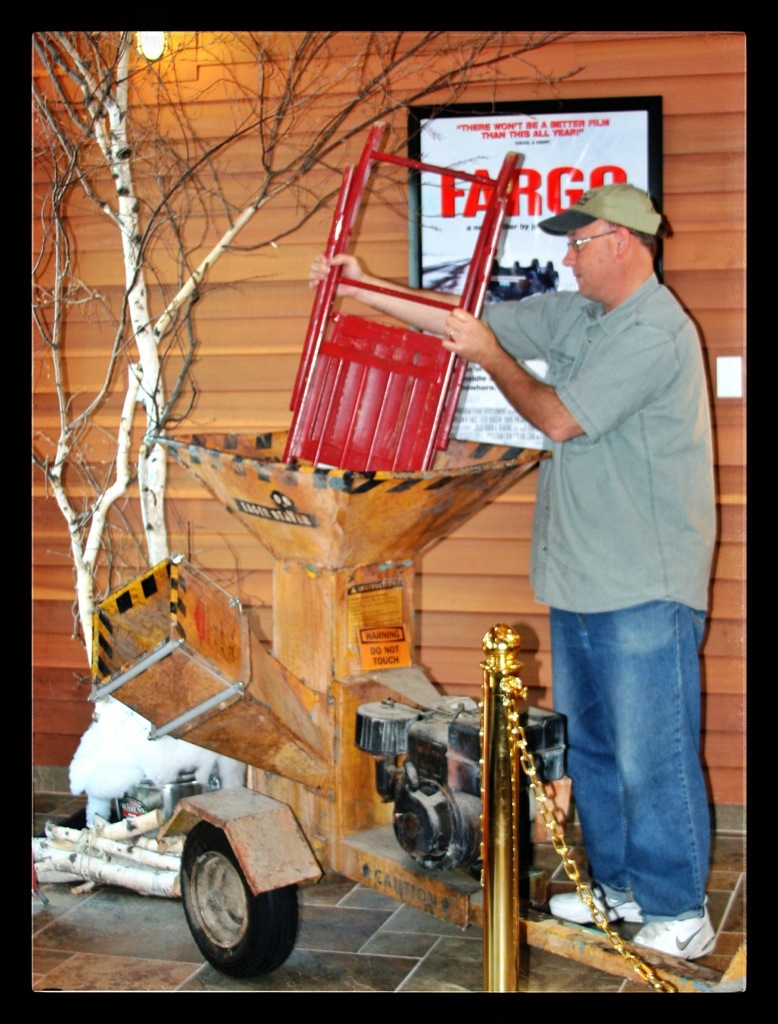 I asked the guy behind the counter where I could find a North Dakota sign that wasn’t in the middle of a four-lane highway. He spent the next 10 minutes searching the web but couldn’t come up with one closer than 200 miles away. Apparently North Dakota only advertises itself in a few scattered locations.

We drove back into Minnesota, then turned around and drove back under the sign while my wife held the chair on the dashboard. 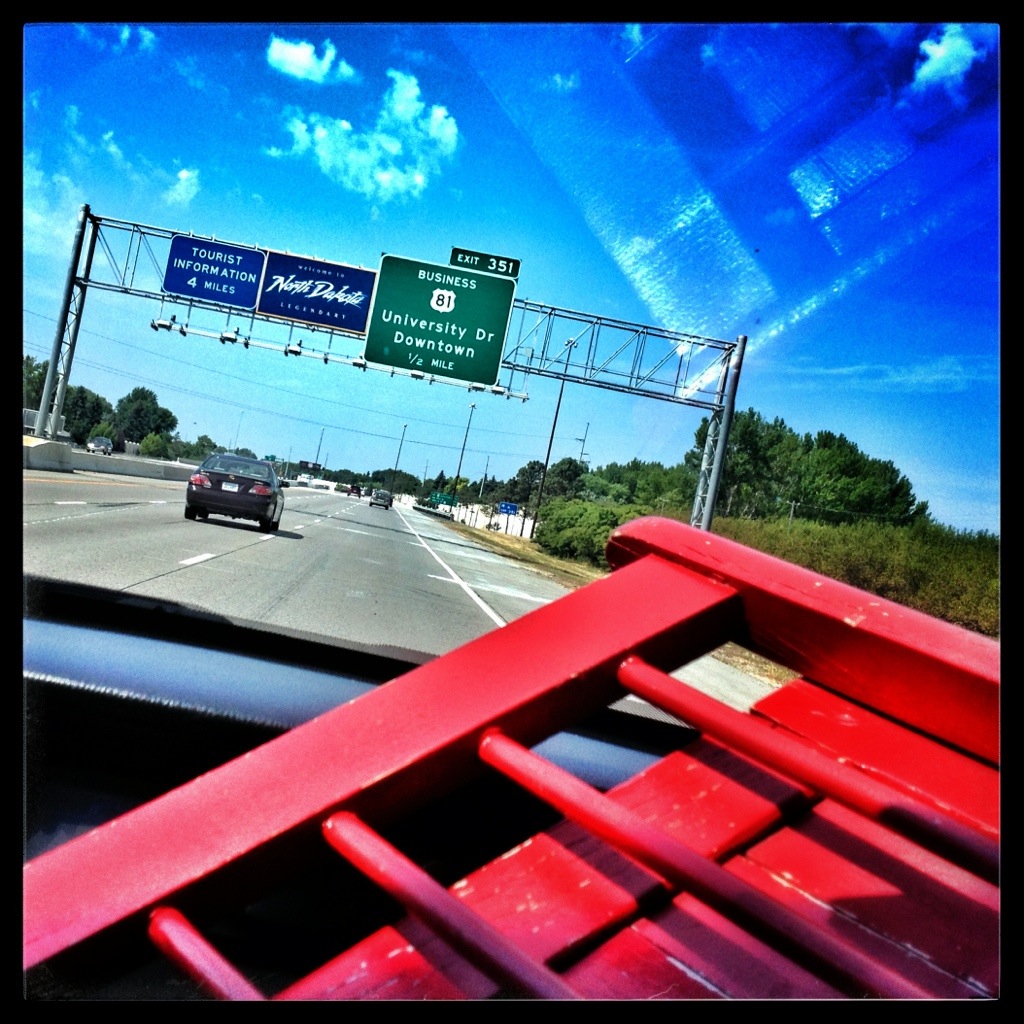 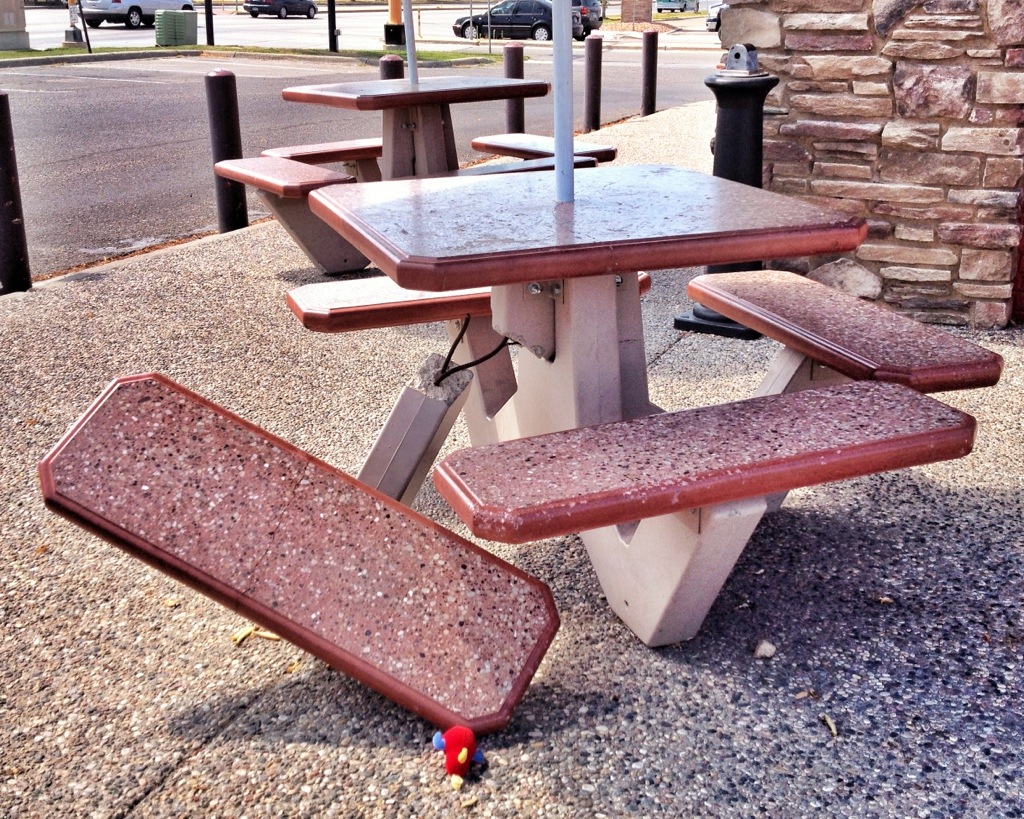 I decided to drive to the our friends’ house on side roads. We headed south out of Fargo on I-29. I misunderstood the directions and pulled off at the wrong exit, which gave me a brand new experience — pulling off an Interstate exit ramp onto a dirt road. I figured things out after a few miles and dropped down to Route 46.

I didn’t know it until later in the week, but Route 46 is claimed by some to be the longest straight-line road in the United States. There are a few wiggles to cross rivers and such during its 123 mile length, but one stretch extends 31 miles without the slightest deviation. 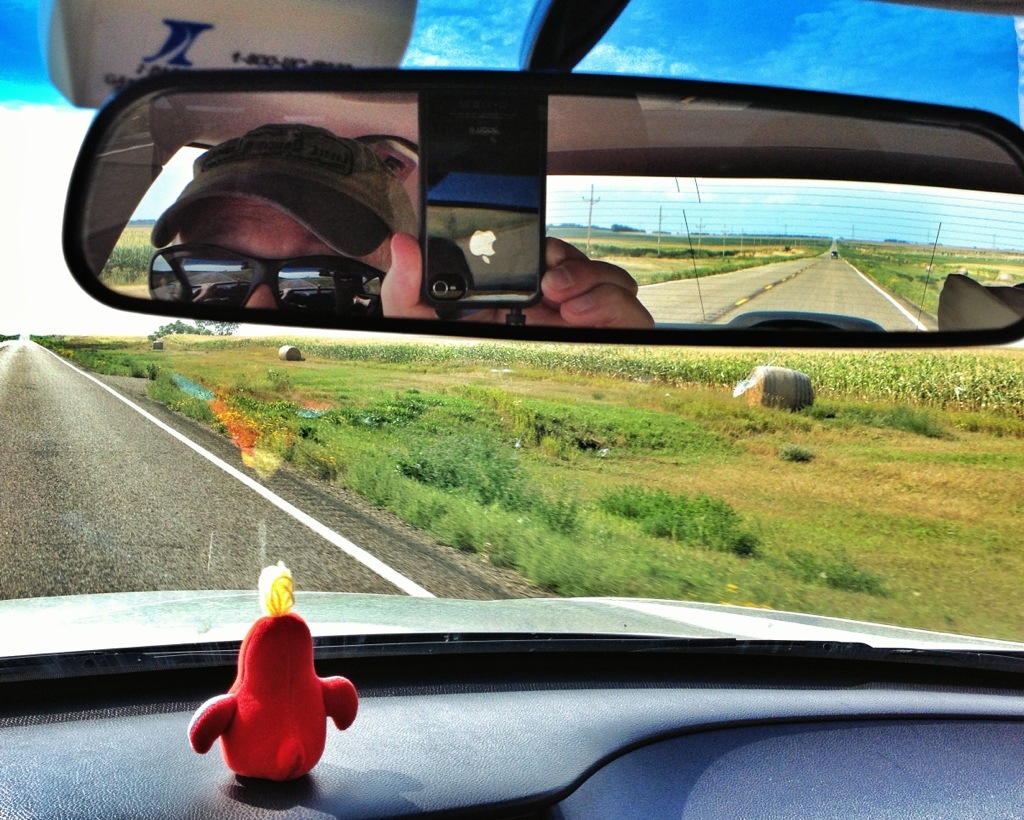 There were very few buildings along the road, although there was the occasional tree. 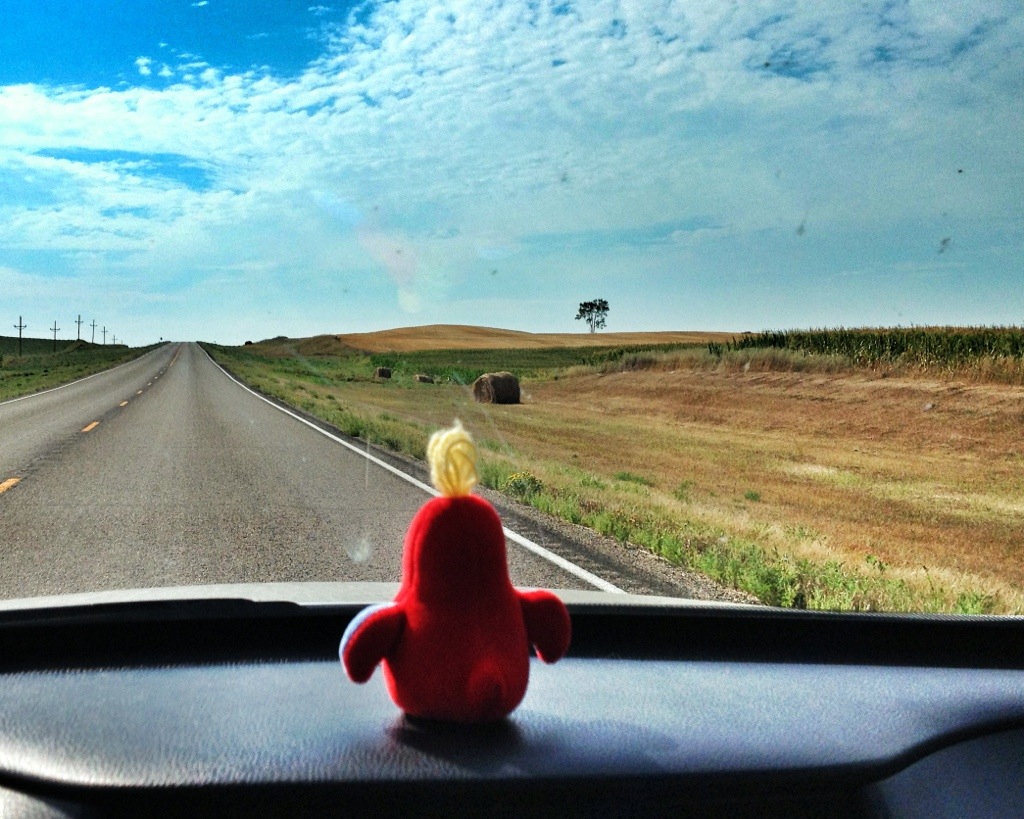 After an hour and a half of this, we turned onto a dirt road and headed into Alfred. The road into town crosses a causeway across a large slough, but it wasn’t built that way. Over the past 20 years or so, large bodies of shallow water have been appearing all over the state — nobody knows exactly why. The state has to continually raise or reroute roads, and we saw evidence of this all over the central part of the state. 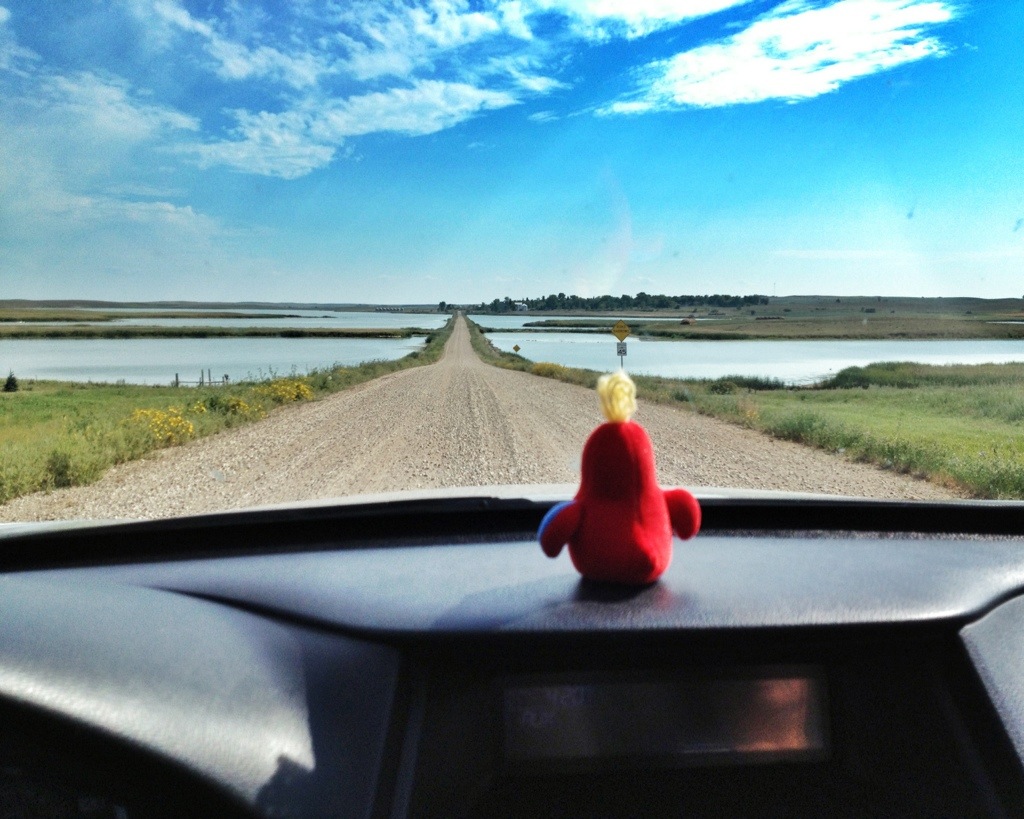 Alfred currently has a population of 13. There are at least as many abandoned houses in town as there are occupied ones. 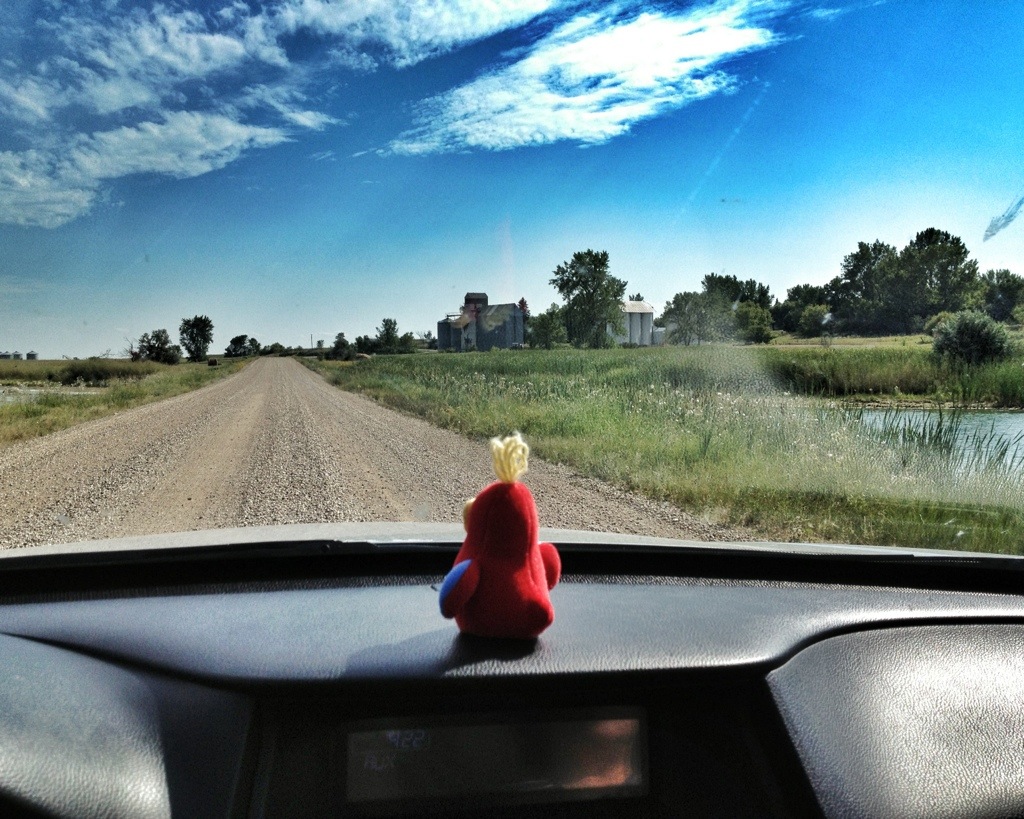 Here’s the view north from our friends’ house. There is a farm visible in the distance. 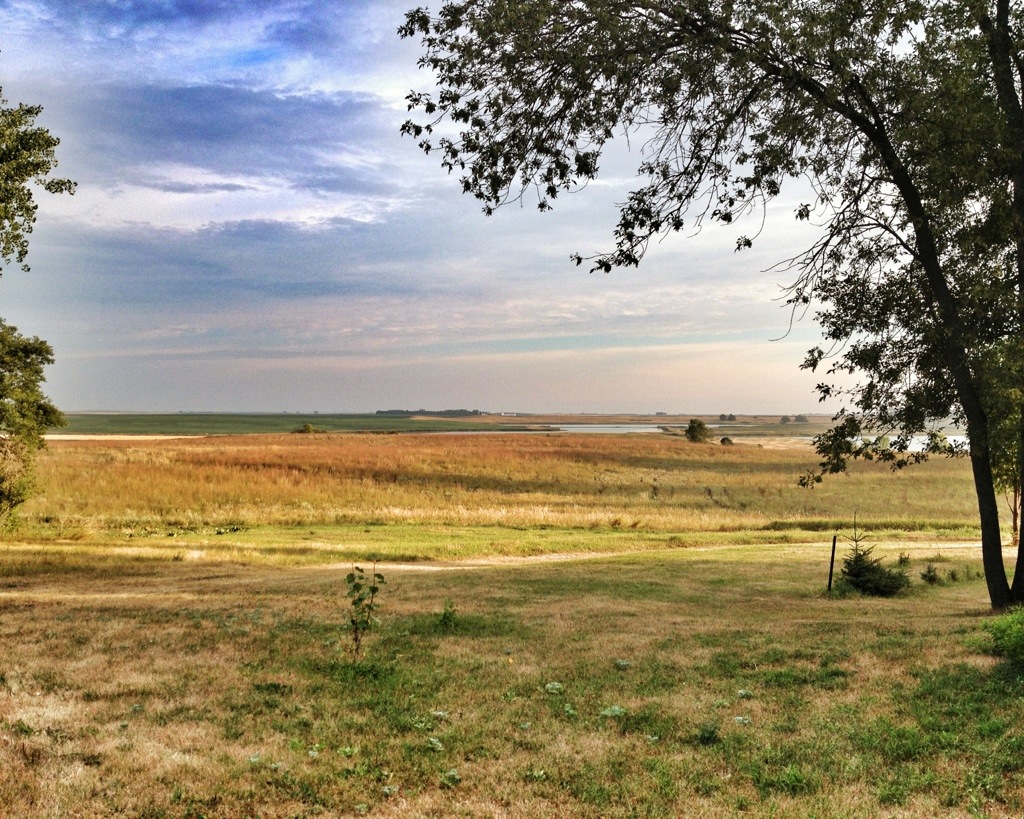 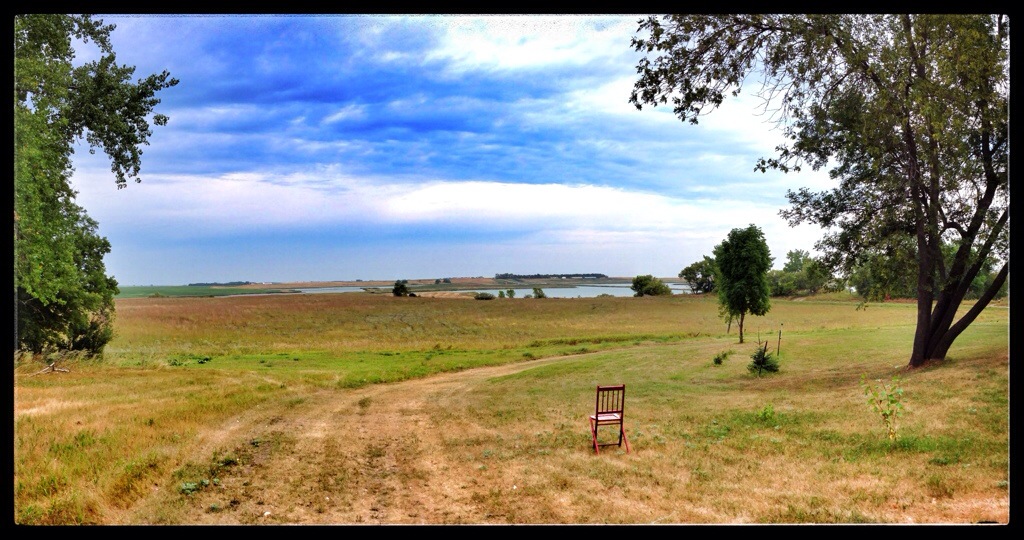 A note on the weather for the first seven days of our trip — it was hot. In the 90’s hot, with humidity that didn’t seem terrible to us but which the natives considered oppressive.

In the evening, we climbed into a pickup and got a tour of the surrounding area, including the now-abandoned home of the town’s founder.

This entry was posted in Movies, Red Bird, Sculptures and Statues, Transportation. Bookmark the permalink.