A couple years ago, I made a list of cultural fads that grabbed the public’s attention in the past the way Harry Potter has in the current generation. My plan was to read, watch, listen, whatever was necessary, until I became as familiar with them as I wanted to be. I made some progress and then quit for a while, but I’ve started up again.

The Addams Family was an unconnected series of comics, created by cartoonist Charles Addams, that appeared in the New Yorker magazine beginning in 1938 and continuing until 1988. Here are some samples: 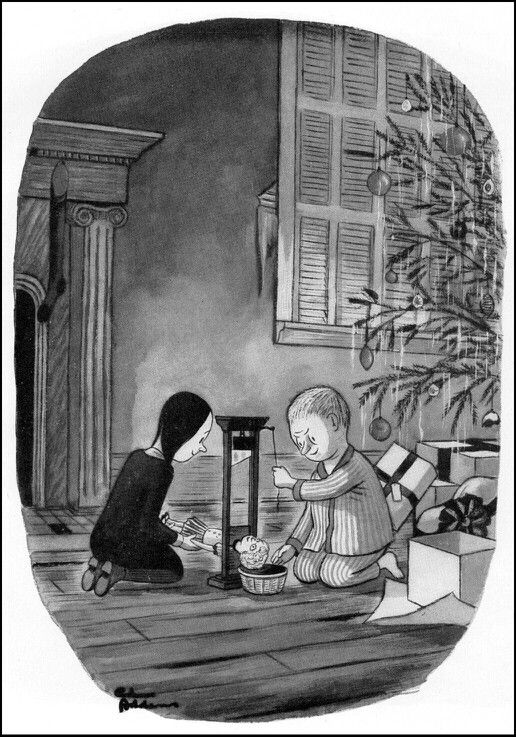 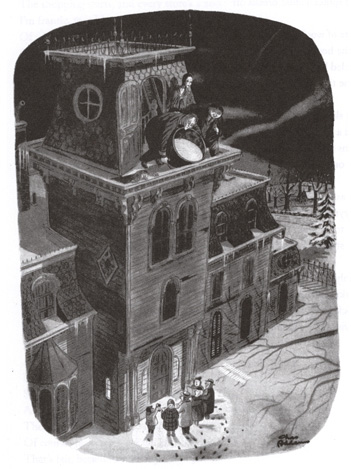 The gag is that the members of The Addams Family are weird and macabre but either don’t realize it or don’t care.

In 1964, ABC turned The Addams Family into a TV show that lasted for two seasons (64 episodes).  I ordered the first disc from the first season and watched three episodes, and that was as much as I could take.

In The Addams Family Goes to School, the two children, Wednesday and Pugsley, were sent to public school but came home in tears because mean St. George killed the poor, innocent dragon. The school principal is shocked by the strangeness of the family.

In Morticia and the Psychiatrist, the mom, Morticia, and the dad, Gomez, are concerned because Pugsley is no longer interested in the macabre but only wants to become a Boy Scout and play baseball. The psychiatrist they hire is shocked by the strangeness of the family.

In Halloween with the Addams Family, two bank robbers hide out with the family on Halloween and are foiled in their attempts to rob the Addams. They are shocked by the strangeness of the family.

That was pretty much the show — just a running gag about how weird this family was as they went about their business unaware and uninterested in how bizarre they are. There’s no plot to speak of and no character development. The only clever part, in my opinion, is Thing, a disembodied hand that pops up from strange places to help the family or thwart those plotting against it.

The theme song is annoying, but it gets in my head and won’t leave. And it reminds me of a verse we used to sing when the show was on the air — back when I was seven. “The Addams Family started/ When Uncle Fester farted …”

Three movies were made in the 1990s, but I wasn’t motivated to see them. In 2007, the characters and theme song were used in an M&M Dark Chocolate commercial.

This entry was posted in TV. Bookmark the permalink.