The Perils of Kindness

I strolled to the park one recent evening to see a fireworks show. My path took me past the high school tennis courts. Two guys and a girl were casually volleying back and forth on the court furthest from the only gate. As I walked along the fence, I noticed two tennis balls that had rolled through the gap at the bottom. Being the nice guy that I am, I picked them up and tossed them over the fence. One of the guys said, “Thank you.”

I turned the corner and began walking along the edge of the court when I found two more balls lying in the grass (balls 3 and 4 on the diagram below). It was no effort whatsoever to pick them up and toss them over the fence. Again, one of the guys said, “Thank you.”

I walked over and picked up ball seven and tossed all three of them over the fence. I didn’t get a “thank you” this time. I don’t know if they’d exhausted their capacity for gratitude, or if the situation was beginning to get as awkward for them as it was for me.

I continued my trek (indicated by the red line). That’s when I noticed balls 8 and 9. 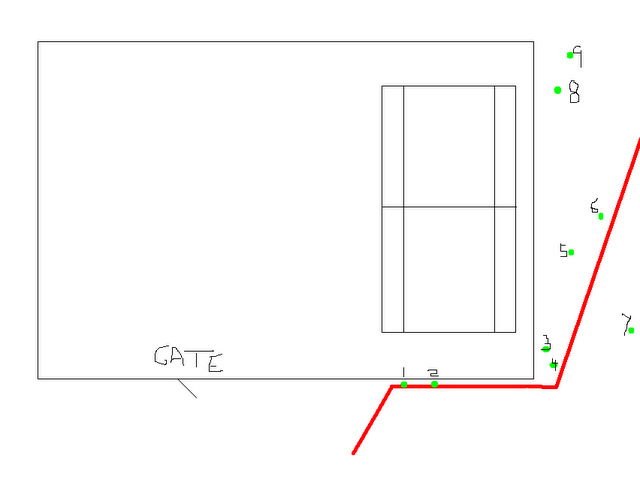 I was dangerously close to becoming a full-time ball boy. I was no longer receiving any acknowledgement for my efforts. But if they had to walk all the way to balls 8 and 9, then what good had I done up to this point? So … I ask you. What would you have done if you found yourself in my situation?

This entry was posted in Life Is Weird. Bookmark the permalink.

5 Responses to The Perils of Kindness