I flew down to Texas over the weekend with my sister to give several workshops at a conference in Fort Worth. We got in on Friday just before lunch, which gave us time to visit the site of the Kennedy Assassination.  The chip on the ticket is paint I peeled from the side of the building. 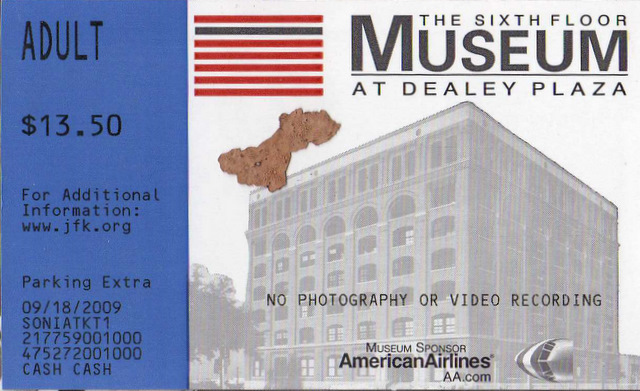 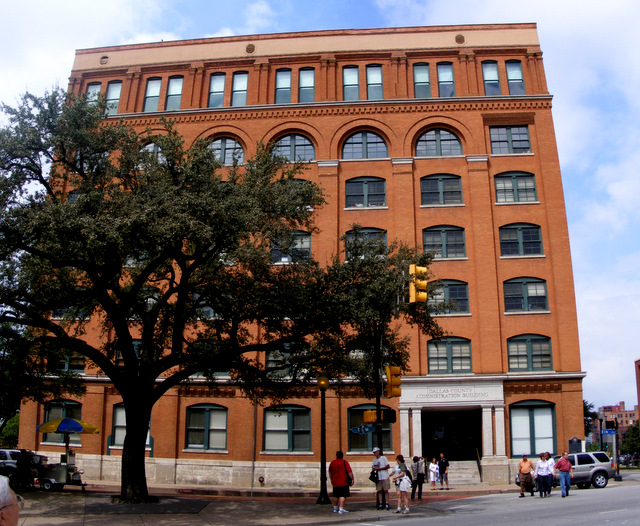 We had to pay $5 for parking and another $13.50 for museum admission before riding the elevator up to the sixth floor. The walls were lined with displays about JFK’s presidency and death. We were given headsets for an audio tour, but the voice just sent me to the various displays and gave me the same information that was written there. I quickly found that trying to read and listen at the same time prevented me from getting much out of either. Signs about every three feet informed me that I wasn’t allowed to take pictures, although there were no actual artifacts in the building, just photos on the walls, so the only reason for this was so they could sell more stuff in the gift shop. I did buy this postcard of the view out the window as Oswald saw it. It was taken three weeks after he killed Kennedy. 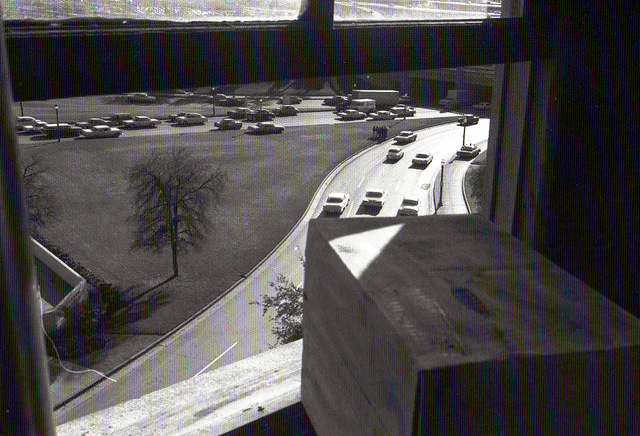 Two areas of the sixth floor were blocked off with plexiglass — the corner where Oswald shot out the window and the corner where he hid his rifle and ran down the stairs. Boxes have been arranged to approximate the way it looked on the day of the murder. Oswald was an employee of the Texas School Book Depostitory at the time. My favorite display in the entire museum was the one that informed me that his orders for that day were left unpacked.

Notice that the plaque below says “Oswald allegedly shot…” (The line under allegedly isn’t actually part of the plaque.) 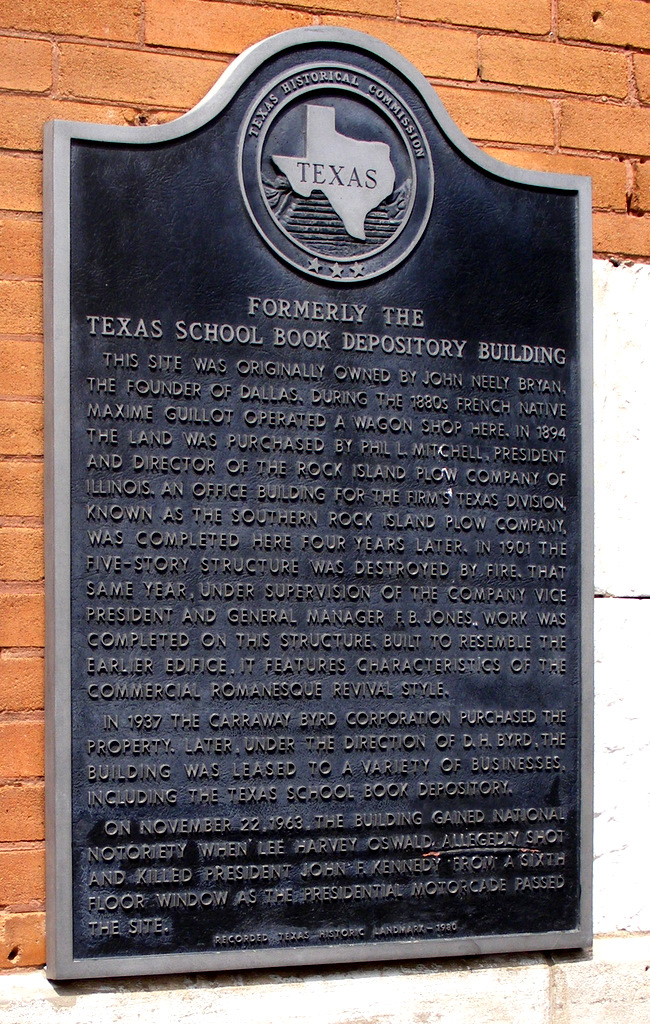 We wandered around Dealey Plaza for a while in the muggy heat. Here’s the window as seen from across the street. I don’t know why none of the conspiracy enthusiasts haven’t mentioned the camera hidden in the box on which Oswald rested the rifle. 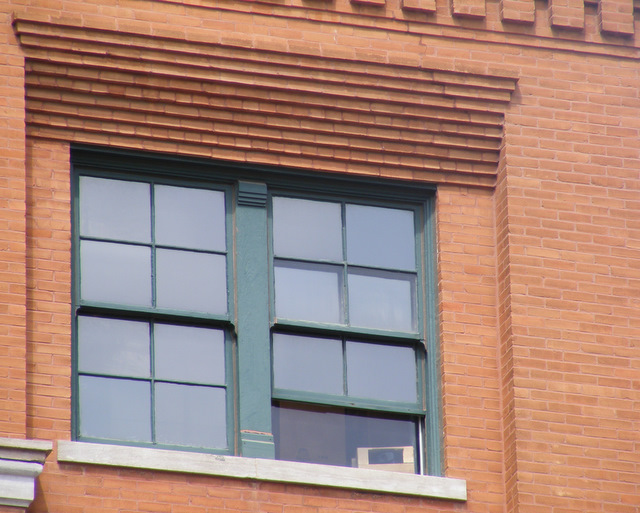 Looking across Dealey Plaza toward the front of the Texas School Book Depository. I think most of the CIA assassins were shooting from this area. 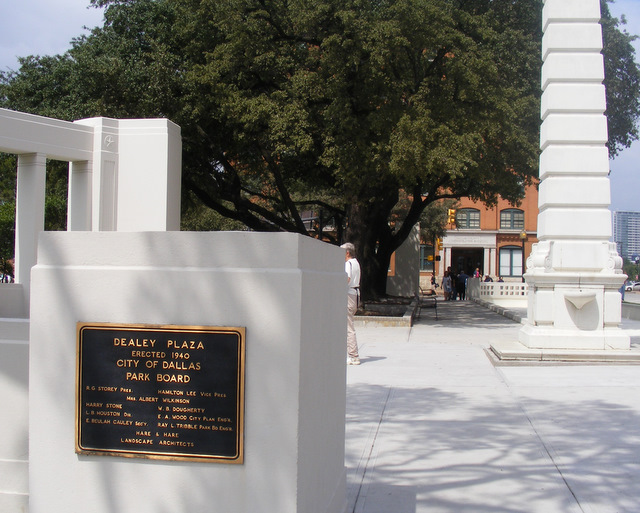 Looking across Elm street toward the Pergola. The X on the road marks where Kennedy was first hit. I’m pretty sure most of the FBI assassins were behind the low white wall to the right. 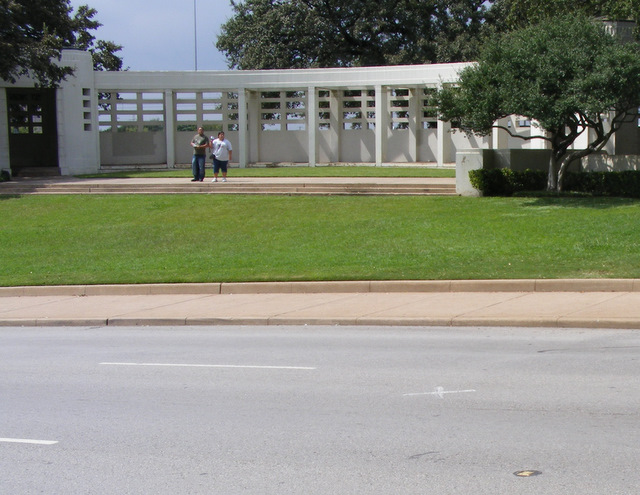 I took this shot from the Pergola looking back across Elm Street toward Dealey Plaza. This was not far from where Abraham Zapruder took his famous film. The Mafia assassins were, I think, on the lawn across the way. 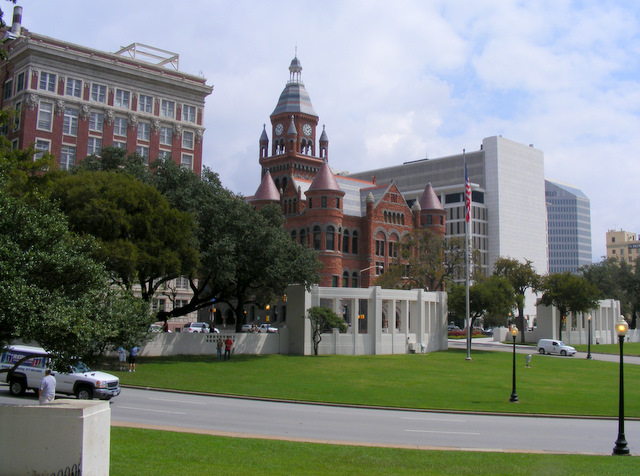 Here’s me on the famous grassy knoll (where the pro-Castro Cuban assassins gathered) with the triple bypass underpass on the left (where the anti-Castro Cuban assassins took their shots). I took this photo on September 18, 2009. I have an alibi for November 22, 1963 and may be the only person alive at the time that hasn’t been connected to the assassination in some way. 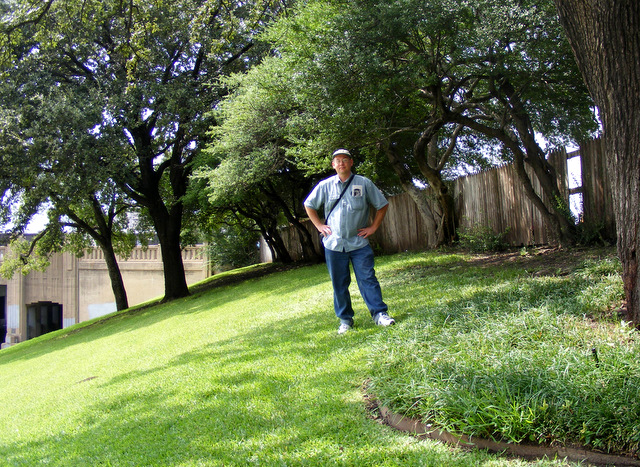 In the shot below, the grassy knoll is on the left and the Pergola is on the right. The stockade fence (from behind which Richard Nixon fired his shots) is at top left. The guy behind the wall was the author of yet another conspiracy book who was having a book-signing. While we were there, he walked out into Elm Street and placed a second X on the pavement in white tape. At the time, I thought it was related to his theory, but then I noticed a white mark on the curb and realized it was probably where Kennedy got hit with the second shot (from Lyndon Johnson’s paid assassins). 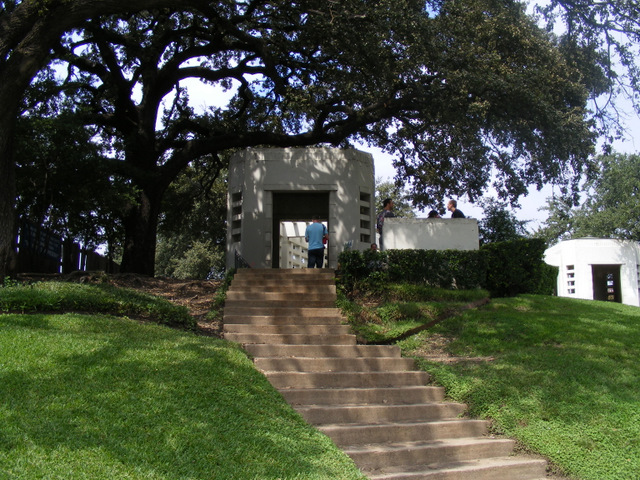 Here’s a pan of the whole area. If you enlarge it, you can see two white marks on the far curb. They mark where the two shots hit JFK. It’s not a large area — I’m surprised all the assassins managed to squeeze in.

Two views along Elm Street from opposite directions.

On our way to Fort Worth, I drove down Elm Street (in the center lane where Kennedy’s car was) and took these two photos through the windshield of the car as close as I could to where the two shots hit Kennedy. 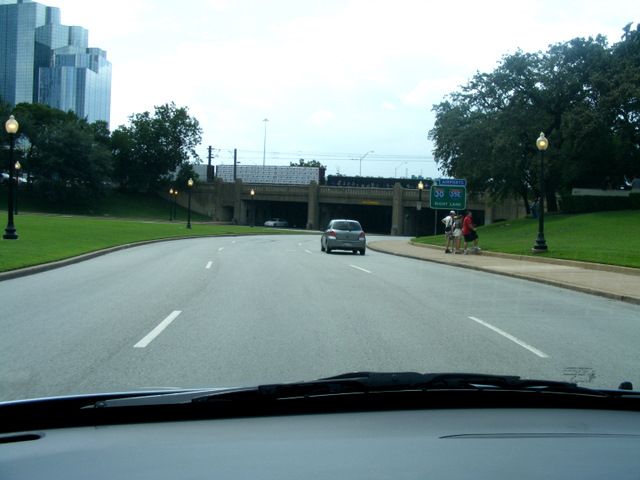 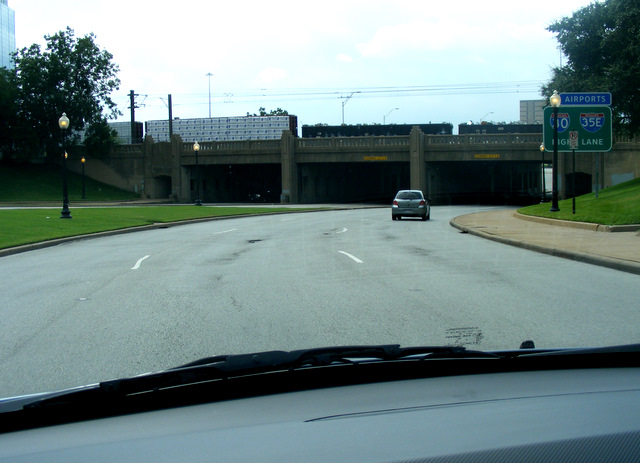 I don’t think the museum itself was worth the price of admission, but I’m glad we went. I thought it was fascinating to walk around outside, not so much because of what happened there, but because of how many photos I’ve seen of it. (I’ve read several books on the assassination — there was no conspiracy.) I had a sensation of familiarity during the entire time I wandered about.