I went on a business trip to Nixa, Missouri, with a coworker and a business associate. Our  It was a lot cheaper for us to fly to St. Louis and rent a car to drive to Nixa than it would have been to fly straight to Springfield, so that’s what we did. This meant that we had to stay overnight, and also that we had some time on our hands. I saw that we would be close to Wilson’s Creek, and the other guys said it sounded interesting, so we headed over after we checked into our hotel.

As it turned out, the business associate wasn’t at all interested and spent much of the time waiting in the car while my coworker and I saw some of what there was to see — we didn’t feel like we could wander very far or stay very long. We watched the slide show and map display in the visitor center, then headed out on the tour route.

Here’s what the National Park Service has to say about Wilson’s Creek:

Wilson’s Creek was the first major Civil War battle fought west of the Mississippi River, and the scene of the death of Nathaniel Lyon, the first Union general killed in combat. Although a Southern victory, the Southerners failed to capitalize on their success. With the exception of the vegetation, the field has changed little and remains in near pristine condition.

Our first stop was the Ray House, the only building in the park that was there at the time of the battle. It was furnished, but we couldn’t go inside. During the battle, the Rays, their nine children and the local postman lived in the three rooms. 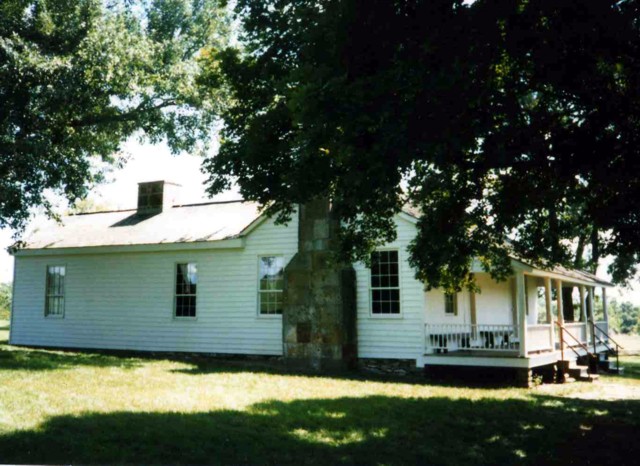 A cannon that is pointed toward Sharp’s stubble field, the scene of a diversionary attack. 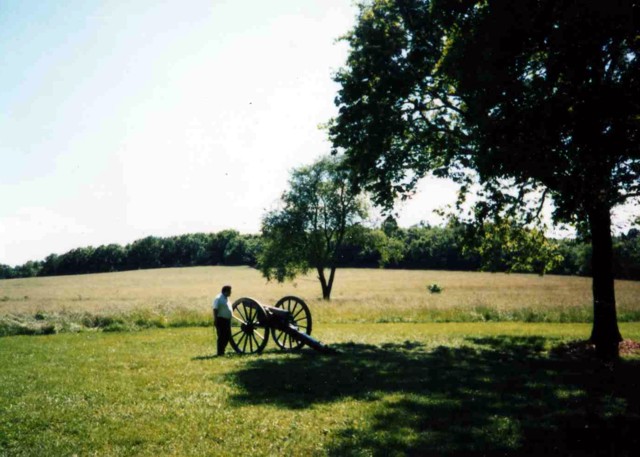 The one place where we wandered away from the car was on Bloody Hill. There was a monument that reads: At or near this spot fell Brigadier General Nathaniel Lyon. Born Ashford, Conn. 1818. Graduated U.S. Military Academy, 1841. Commander of the Federal forces in the battle of Wilson’s Creek August 10, 1861. This marker is erected by The University Club of Springfield, Mo. in honor of General Lyon and the hundreds of brave men, North and south, who on this field died for the right as God gave them to see the right. 1928. (Interesting how God gave men the right to fight for opposing views.)

Here’s a view of the slope of Bloody Hill. 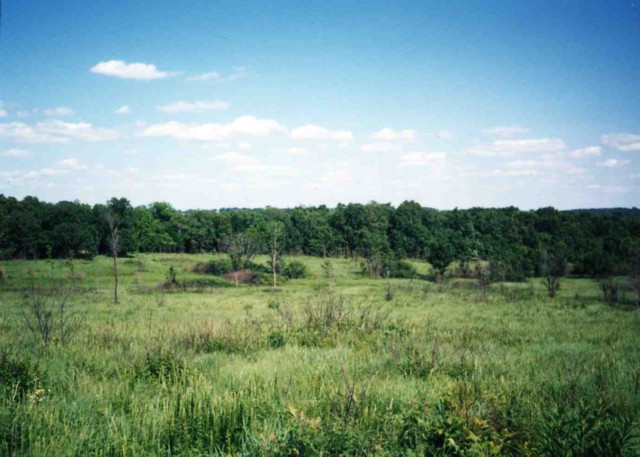 The panorama below shows Bloody Hill on the right. The Ray House is somewhere in the distance, about a mile from where I stood.