Down from the Mountaintop

The Piz Gloria has the 007 logo painted all over the outside. The inside is decorated in James Bond. There’s a small museum called Bond World 007 that consists of photos, tidbits of information about On Her Majesty’s Secret Service, and some photo ops.

The museum was fun because I’ve read the book and seen the movie, but we were up there for the outside view, so we didn’t stay long.

We hung around on the plaza a bit longer, enjoying the view and the Yellow-billed Choughs that were looking for handouts. 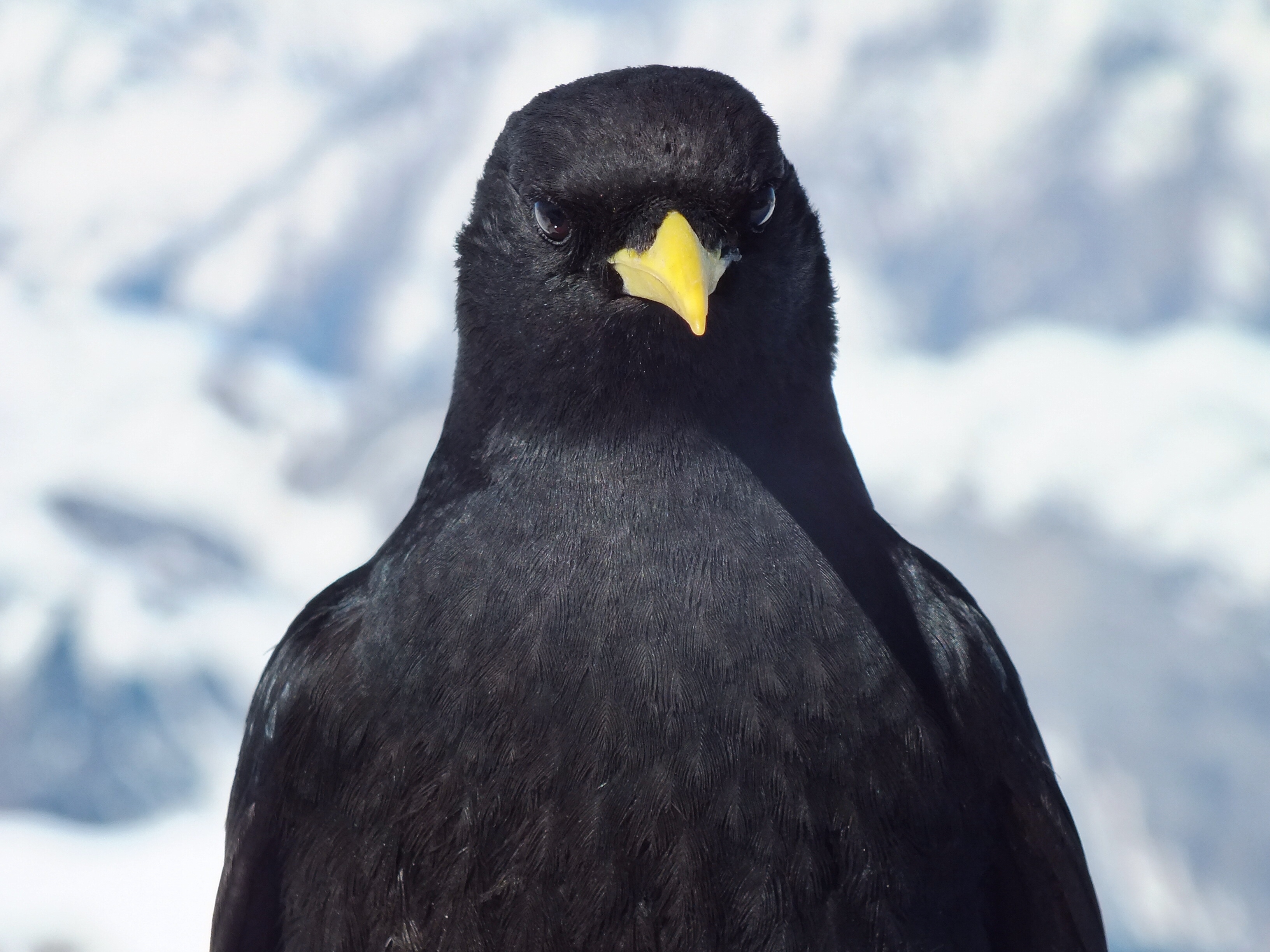 We noticed this sign on the way up, so I made sure I got a photo. 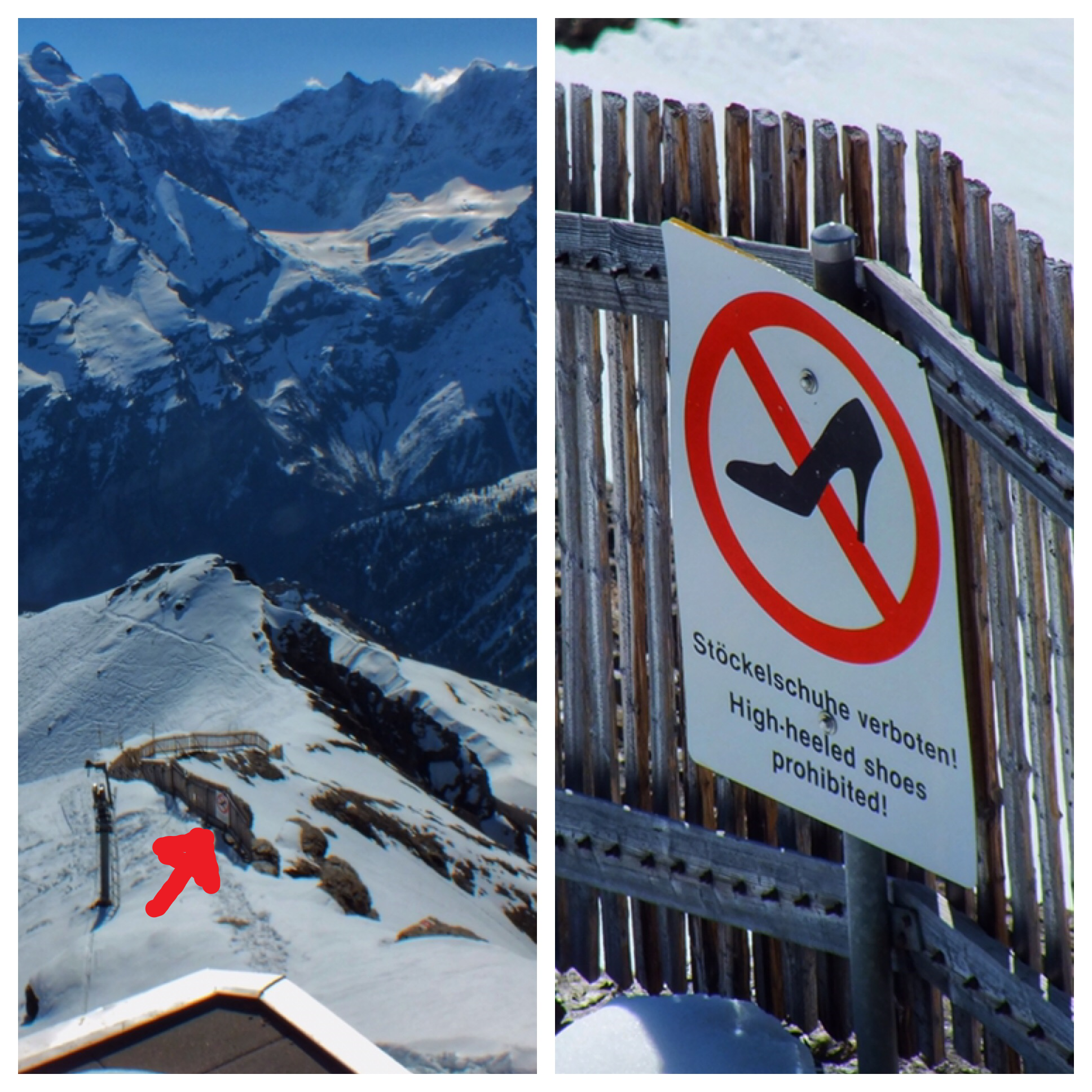 As we waited for the cable car to take us back down, we watched the scene from On Her Majesty’s Secret Service where the good guys stage a helicopter attack on Piz Gloria.

On our way down to Birg, we encountered a short Chinese woman who decided she wanted to be where we were and that the way to get there was simply to repeatedly butt into anyone in her way until they moved. She made a lot of headway until she got to me. On her first push, I pushed back a little and got an elbow. She then tried simply leaning against me but I stood my ground. She finally resorted to reaching her camera over in front of me and taking pictures even though the view from the place she’d already reached was identical in every way to the one in front of me. When the ride ended, her companions who were by the door, exited immediately. She panicked and hurried to catch up with them using the tactics of a wrecking ball. I’m sure there’s a cultural explanation that accounted for some of this, but she was way over the top. I have chosen to blame her for the month-long virus I brought home from Europe.

There’s a expert ski run that begins at Piz Gloria and descends much, if not all of the mountain. We could see the occasional skier pass beneath us as we waited to descend.

Approaching Birg. Most skiers stop here. It also has a restaurant, a gift shop, and the Thrill Walk. There was also an “igloo” restaurant made of snow that interested us, but it catered to skiers and we’d have had to navigate a steep, snow-covered slope to get there and back, so we skipped it.

On our way up in the morning, we’d passed over a section of the “Thrill Walk” that hangs off the cliff below Birg. I determined to experience it when we got back. 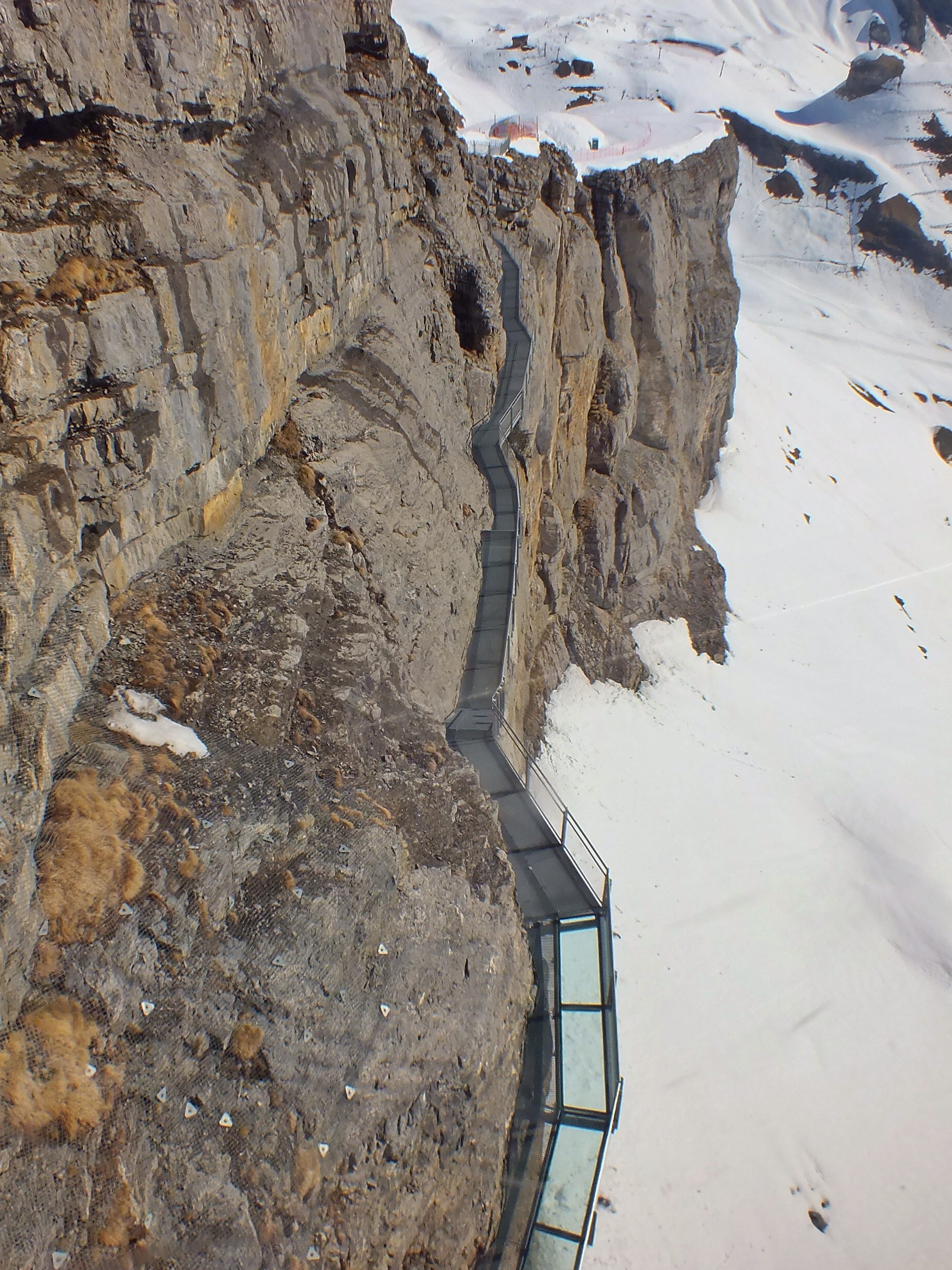 Steel grate steps led down perhaps 100 feet from the restaurant plaza. If my estimate is correct, then we were anywhere from 200-300 feet above the snow and rocks below.

I wasn’t sure how I would manage, but quite frankly I found none of it intimidating. Along the walk, there were four sections of “thrill.” The first was a wire walk over a net. The second was a glass floor.

A third section had rollers for a floor. It wasn’t even worth photographing. The final thrill was a suspended wire tube we could crawl through. I wasn’t sure I’d even fit, so I didn’t try. We had to climb back up to the level of Birg through a slanted walkway in a big plastic tube. Living at 6,700 feet in Colorado helped here.

We ate mediocre sausages, cheeseburgers, and fries at Birg, and then descended back to Mürren. Here’s the view from Birg, with Mürren visible in the center of the photo.

We returned to the hotel for our perfectly-safe luggage and hung out in the lounge for a while, reluctant to leave the beauty. This was the view out the windows—yes, it’s the same view as the day before, but the tops of the mountains aren’t hidden in the clouds.

This is the Jungfrau. The peak seems to be right behind and above the wall in the foreground, but it’s about 5,000 additional feet—nearly a mile—higher and also further away.

The best shot I got of the Eiger (13,026′) and the Mönch (13,475), poking up behind the shoulder of the Jungfrau. The woman who runs the hotel came in and said hello. I told her that we were from Colorado, but that her mountains were more beautiful. She agreed, and said they were higher too. Technically, she was wrong. Pikes Peak, which is visible out the windows of our house, is 14,115′. But our house is already at 6,700′ and the slope of Pikes Peak is gradual. Here, the Jungfrau, for instance, rises a sudden 11,030 feet above Lauterbrunnen on the valley floor, making it seem almost incomprehensible tall.

We finally tore ourselves away and walked back to the train station. A short ride to Grutschalp, a quick cable car trip down to Lauterbrunnen and we were back at the car.

We made a short but courageous trip through the insanely narrow and tourist-crowded streets of the town to see the waterfalls cascading off the cliffs, and then we headed back to Germany. 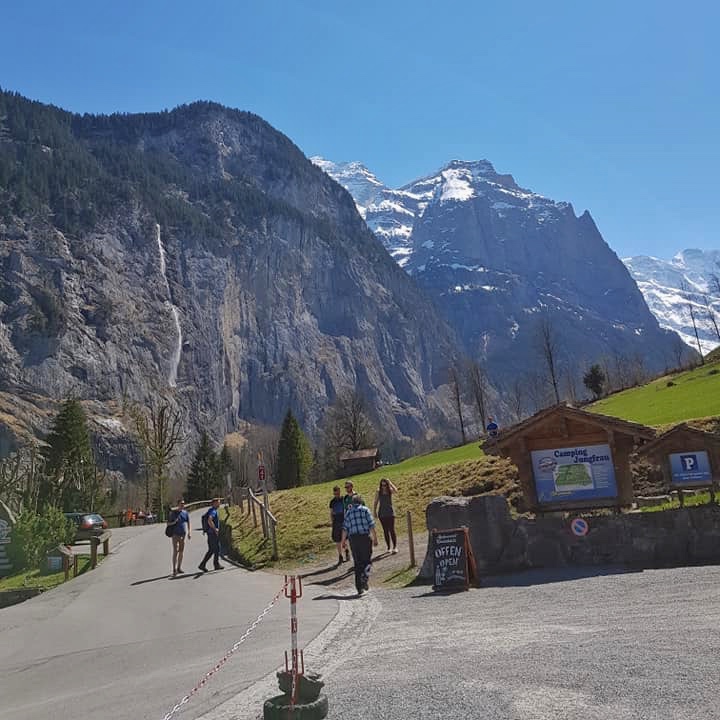 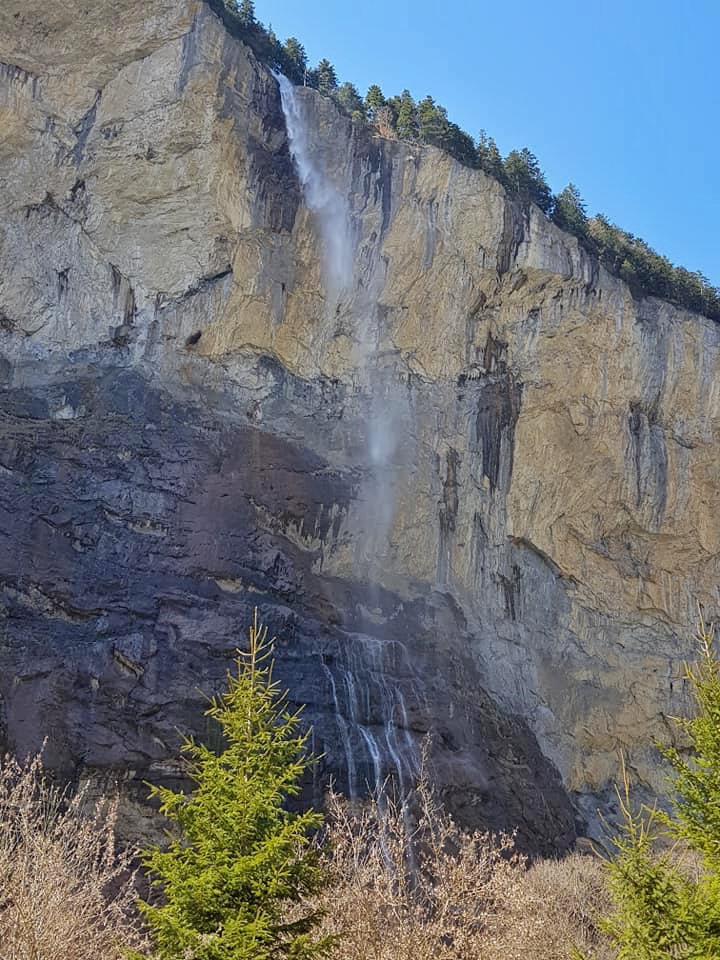 This entry was posted in Movies, Museums, Scenery. Bookmark the permalink.