When we arrived in Mürren, we didn’t have a plan apart from eating fondue. But while we were wandering the streets on Friday afternoon, we happened upon the station where we could take a cable car to the top of the Schilthorn mountain to the Piz Gloria restaurant and the Bond World 007 Museum. It would cost us close to $100 each, but how much is a once-in-a-lifetime opportunity worth? We decided to go for it on Saturday morning.

We woke up early and—I only mention this because it seemed like a really random thing to do high in the Swiss Alps—watched an episode of Everybody Loves Raymond while waiting to meet the rest of the family. Breakfast came with the room, and what a breakfast it was. No canned fruit, cardboard pastries, or omelets that bounce when you drop them. This was fresh food—fresh bread of several varieties, fresh cheese and prosciutto, amazing preserves. There were raw eggs available, with instructions on how long to submerge them in a container of hot water until they were cooked the way we wanted them, but we were content with the bread, preserves, fruit, and cheese. Very content.

We had one problem—our luggage. We had made the overnight trip by stuffing what we needed in our carry-on bags. It would have been inconvenient and uncomfortable to have to drag them up the mountain and carry them around while we were up there. But we couldn’t leave them in our rooms because we had to clear out by 11:00 and we wouldn’t be back by then.

The couple who ran our hotel were very friendly. When I asked the guy what we should do, he said we could just leave them in the lounge. He smiled—I suspect as a reaction to the surprised look on my face—and said they would be safe. We pulled out everything that we absolutely couldn’t afford to lose—wallets, passports, phones, credit cards—and packed them in our pockets. And then we left our luggage sitting in a corner of the hotel lounge. A lounge that at that moment contained a group of teenage boys. Spoiler alert. when we returned six hours later, everything was just as we had left it. The guy also warned us that things would be very crowded on the mountain because it was Easter weekend. He was right about that too.

We walked the length of Mürren, stopping in the grocery store so I could buy a Diet Coke for my morning caffeine. (I don’t think I saw a Pepsi anywhere in Europe except in the commissary on the army base.) In Europe, you can buy your Easter eggs pre-died. I just threw that in for your cultural education. 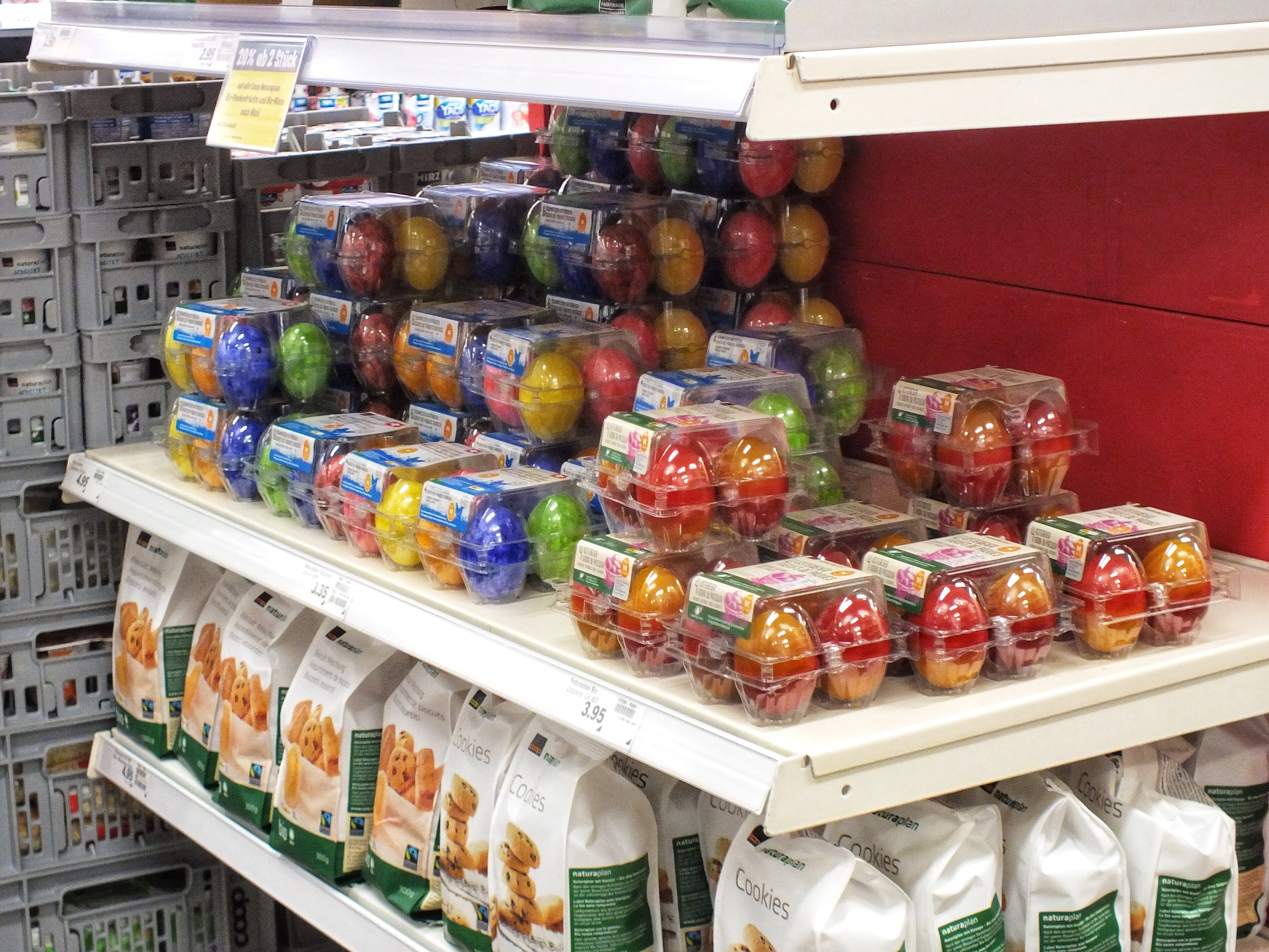 When we bought our tickets, there was already a crush of skiers waiting in line for the cable car. Another crush came up from Stechelberg moments later, and we were in the middle. The cars move fast, however, and there were always two going back and forth from Mürren to Birg, the halfway point up the mountain. We managed to get up against the railing on the downhill side of the next car so we could admire the view. Through the much-scratched window, you can see the town and the cable car station. 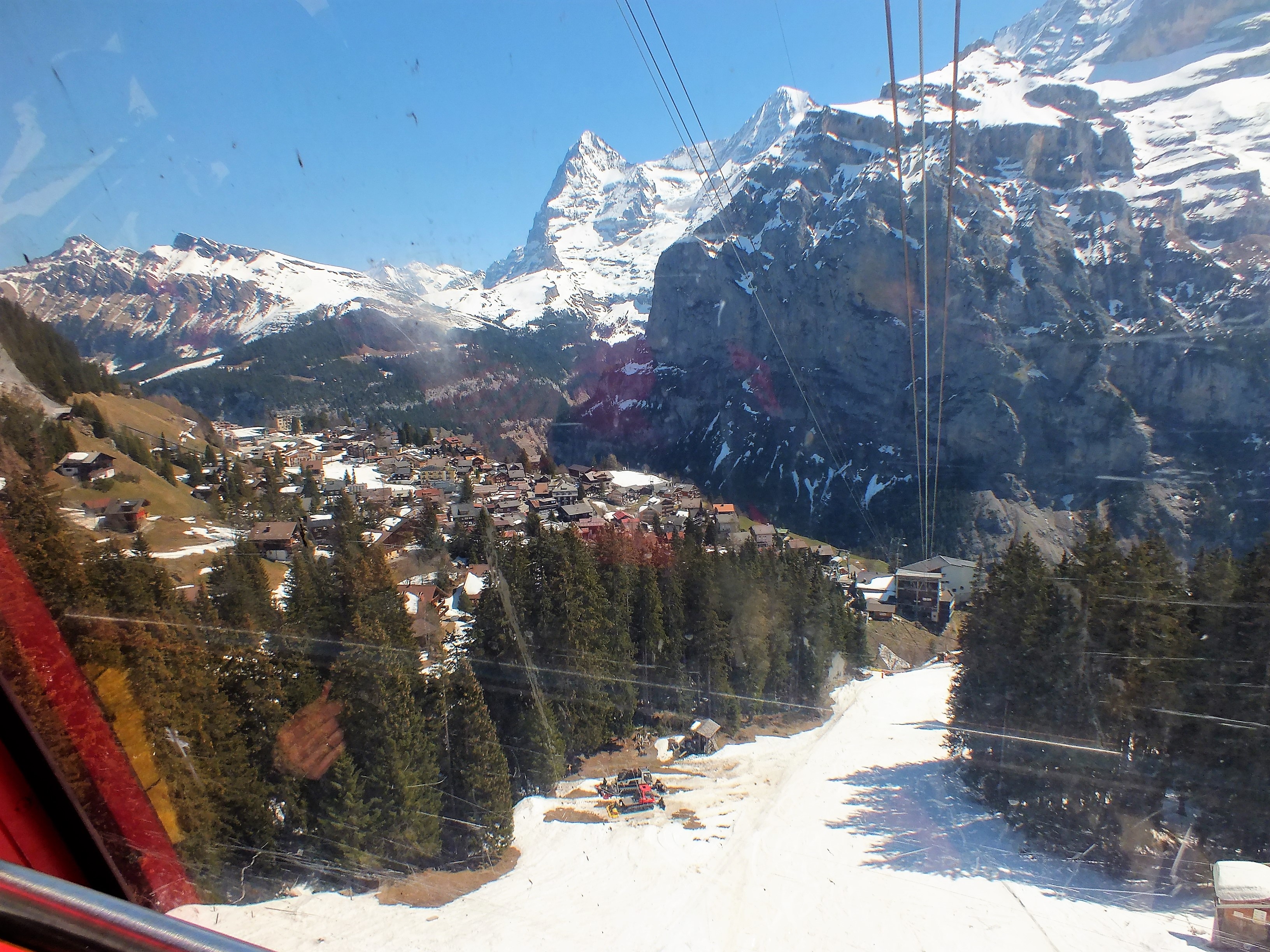 This was the view uphill, with Birg on the top of the cliff. You can see the thrill walk (more on this later) as a silver line across the face of the cliff. 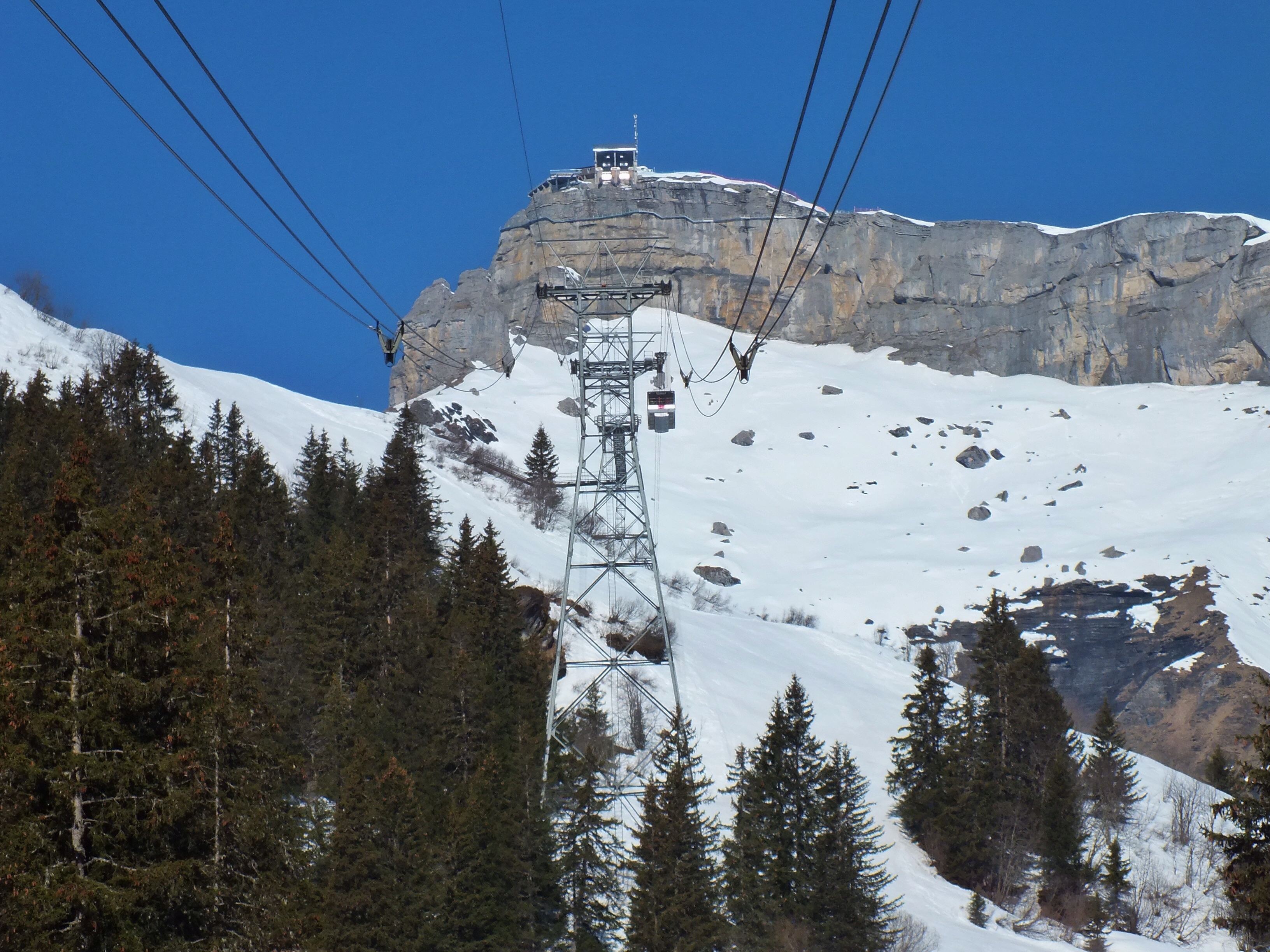 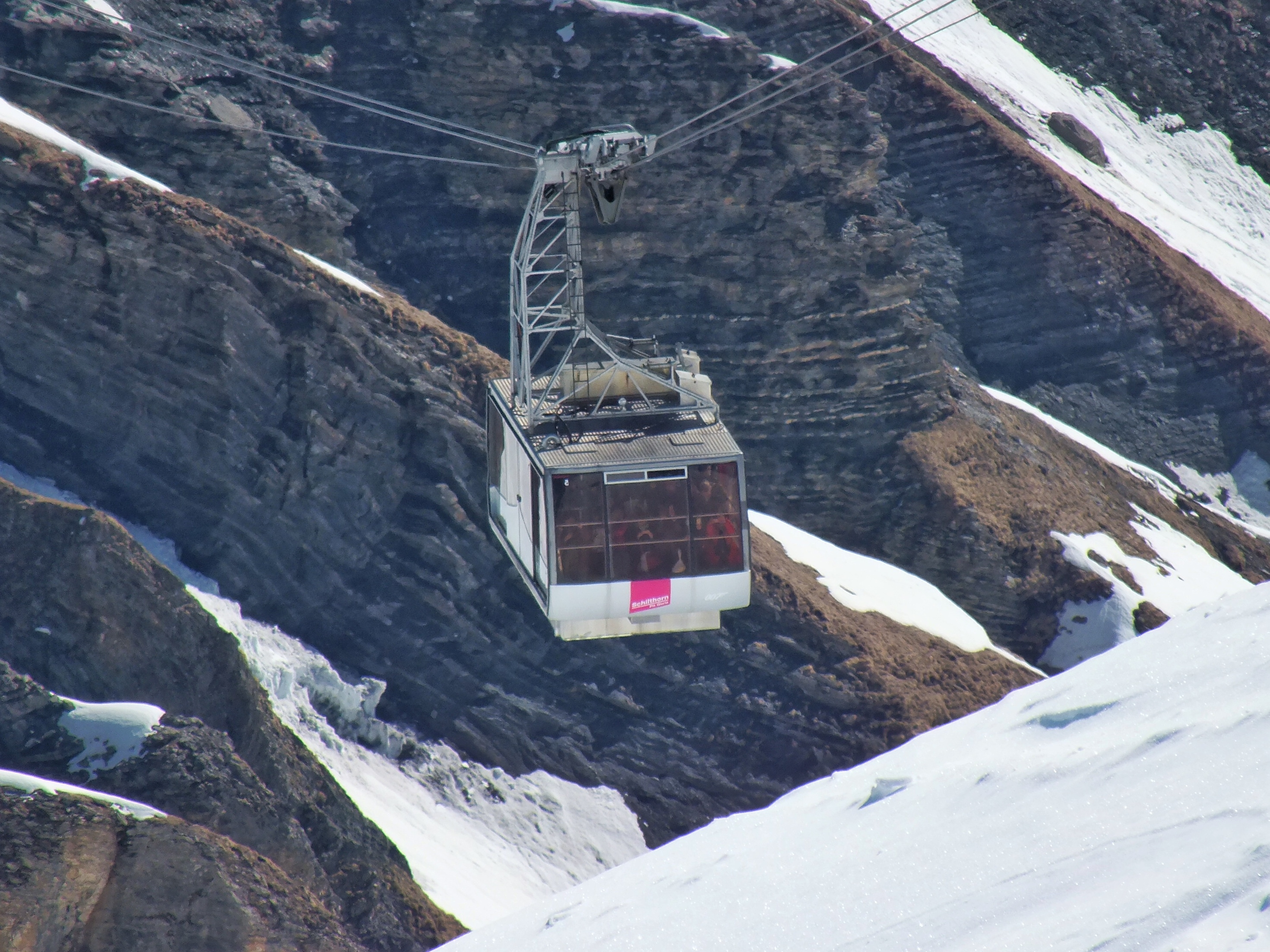 At Birg, we had to switch to another cable car. Many of the skiers got off there and skied the lower slopes. It was from Birg that we got our first good view of Piz Gloria. 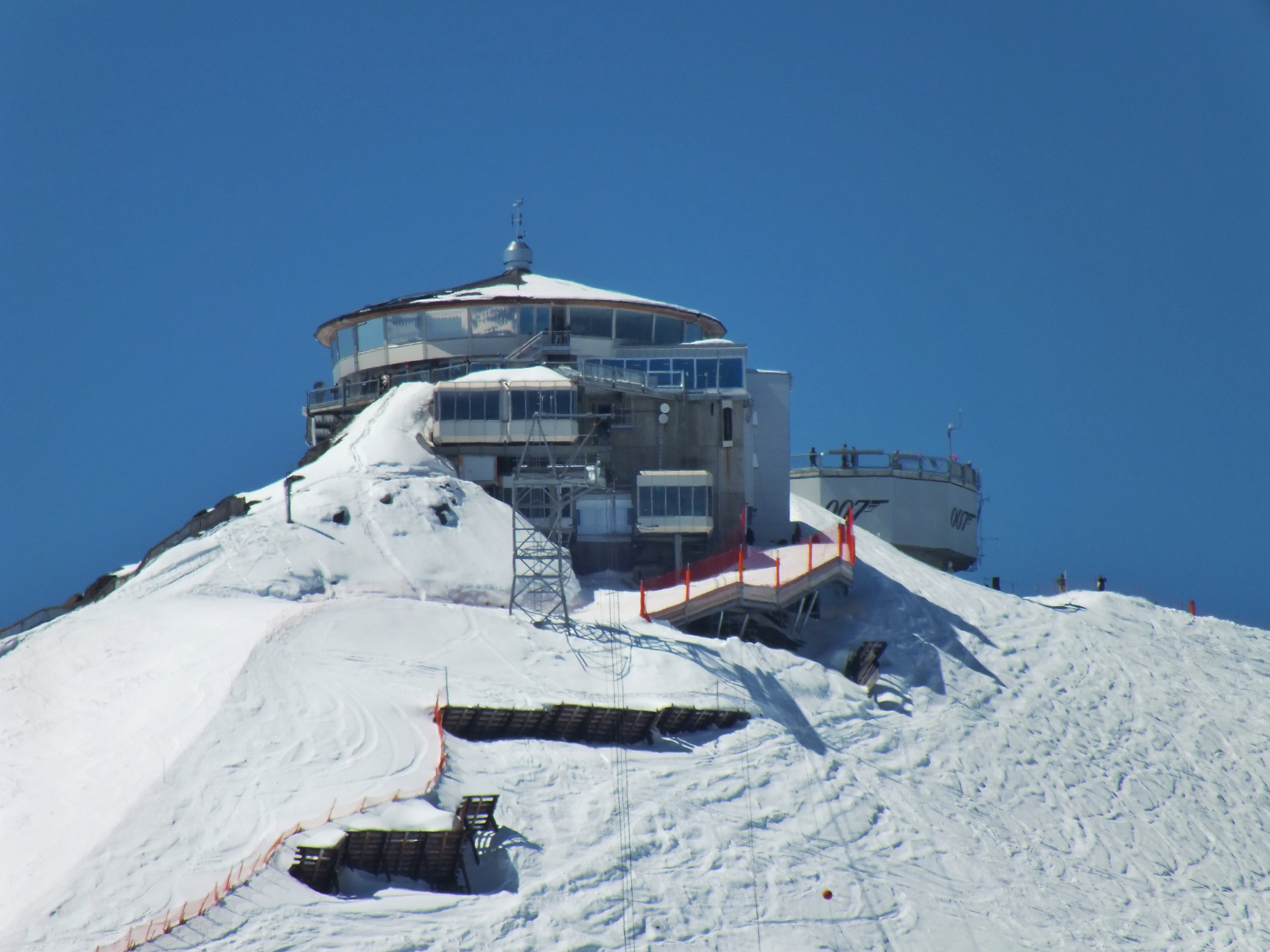 Piz Gloria was built in the mid-1960’s. It was used as the fortress of the villain Blofeld in the 1969 James Bond movie On Her Majesty’s Secret Service. The name Piz Gloria actually came from Ian Fleming, the author of the novel the movie was based on. The setting in the book was in the southern Alps where the word piz means mountain in the  Romansh language spoken there. That’s not the case in the Berner Oberland where Schilthorn is, but the name stuck.

After exiting the car, we navigated our way to the large plaza next to the restaurant. 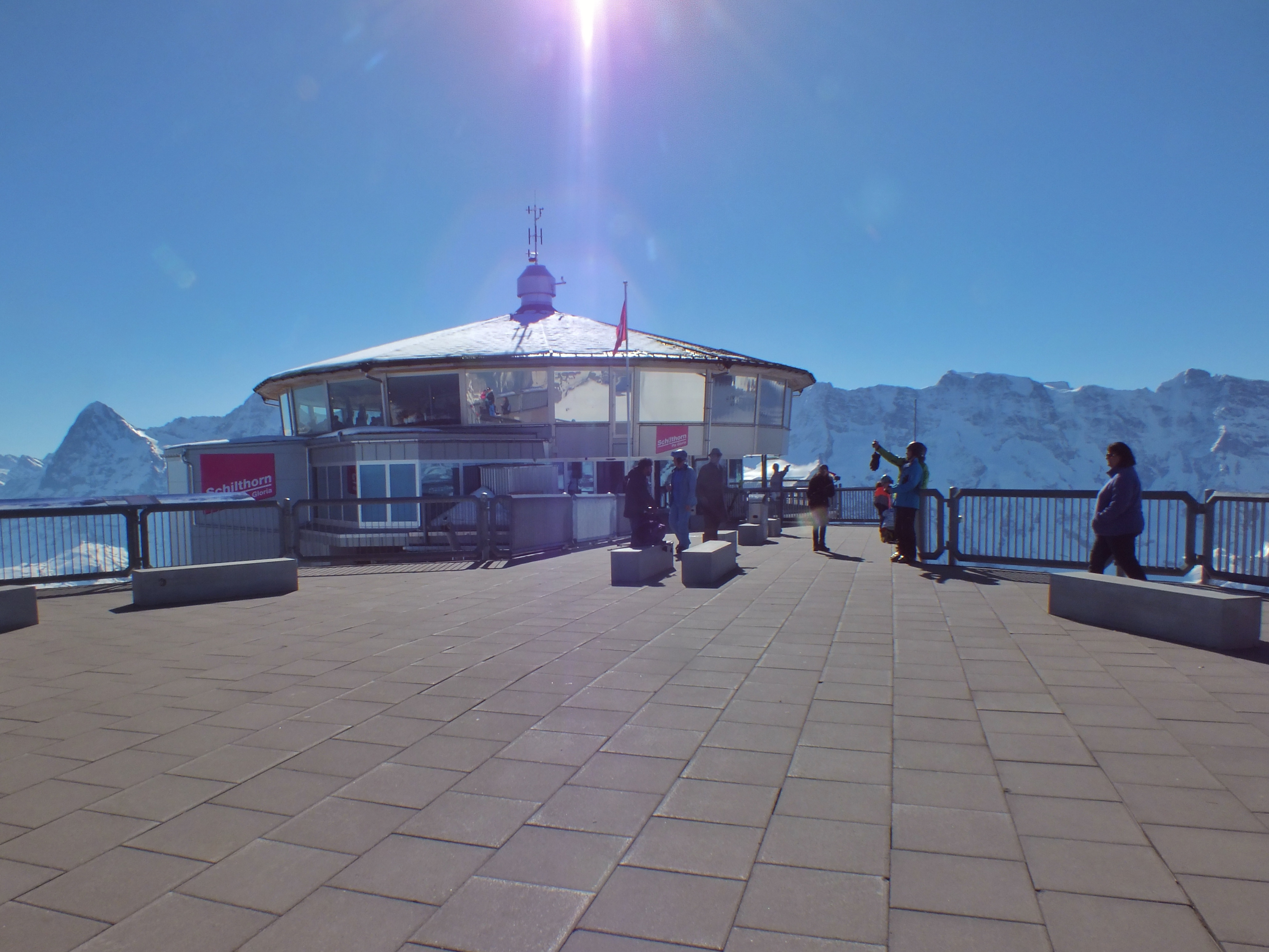 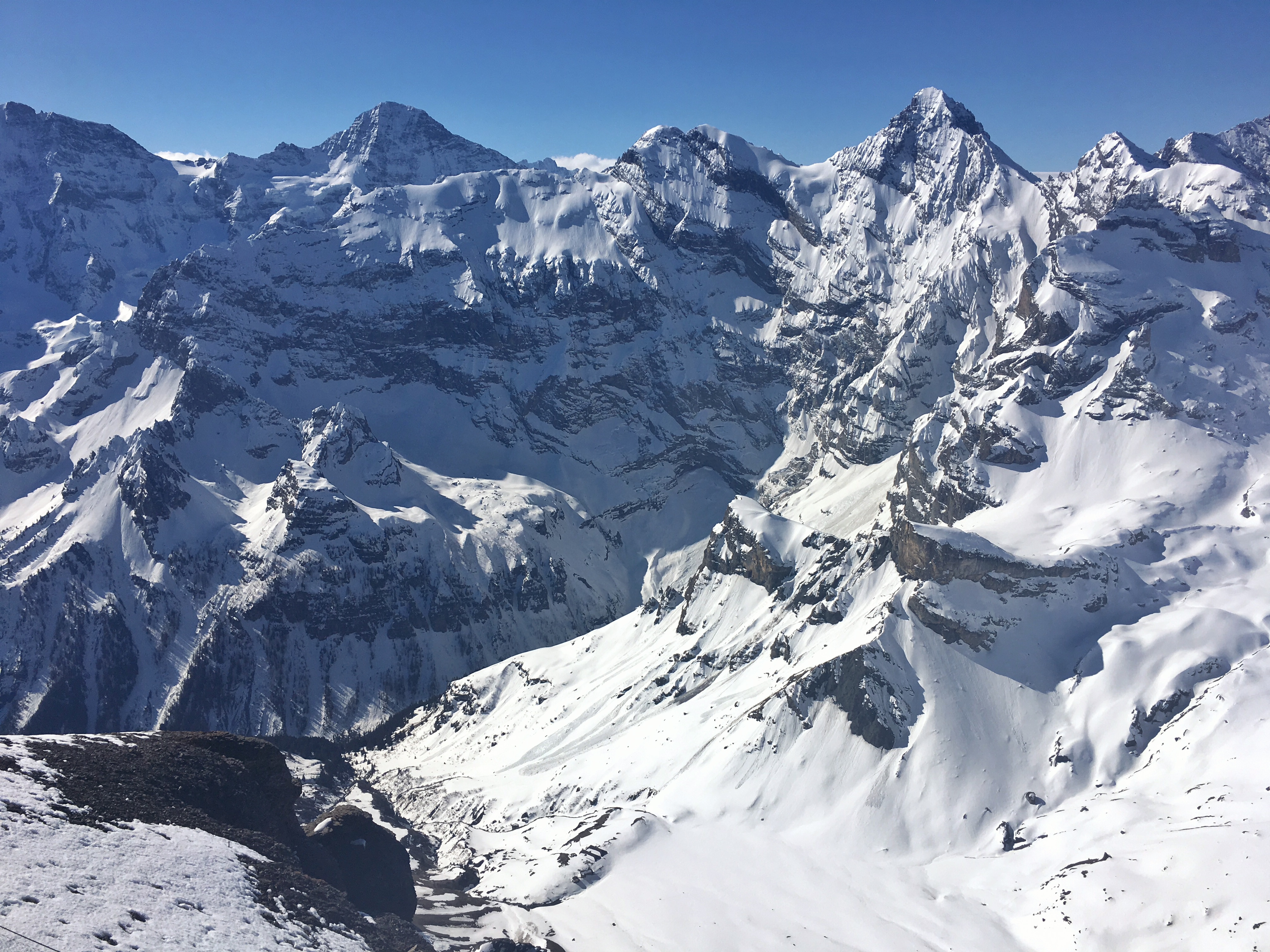 Mont Blanc was visible in the distance off to the west. 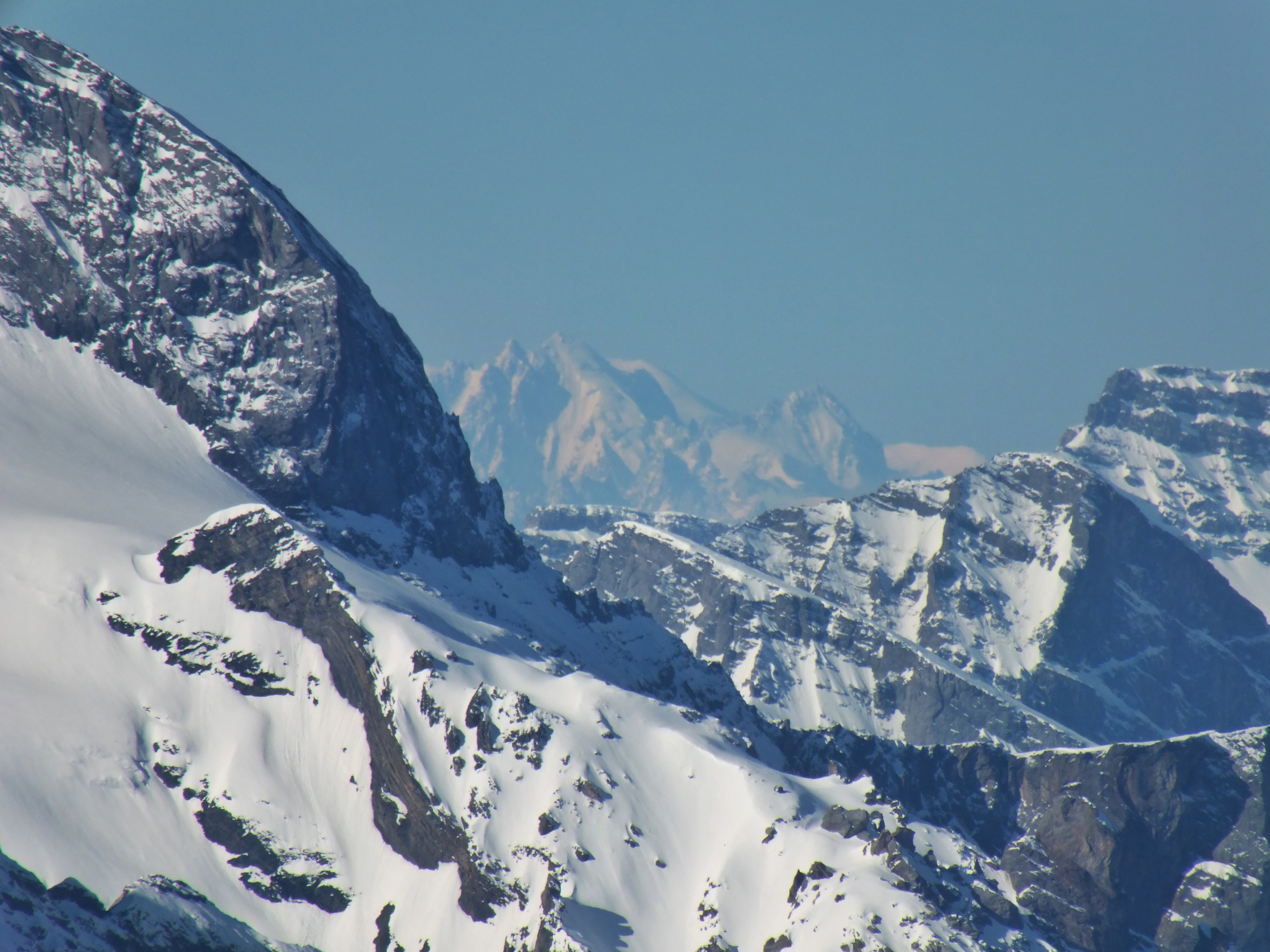 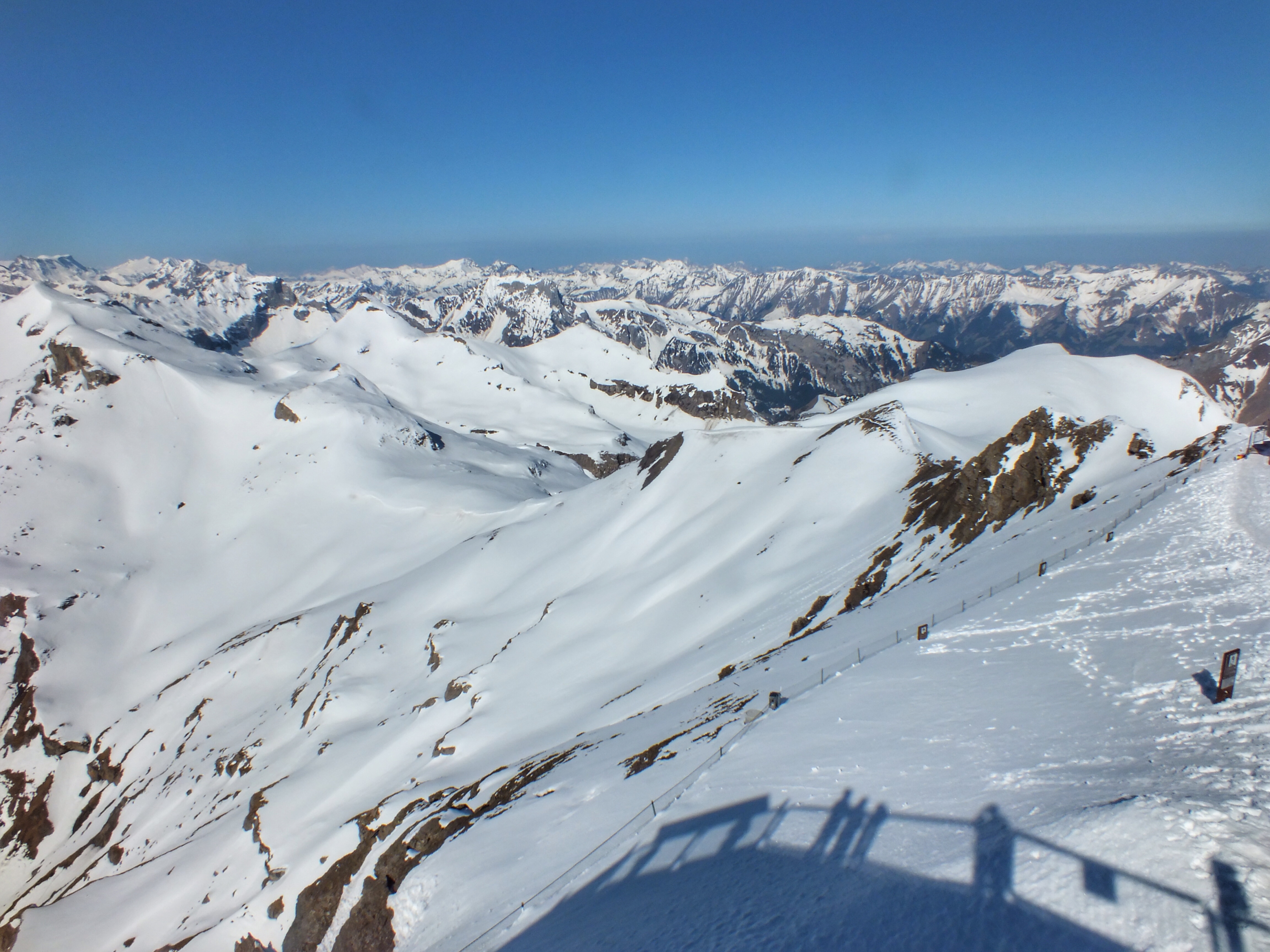 Thun, where we were the day before, was visible off to the northwest. In the far right-hand corner, you can make out where the Aare River enters into Lake Thun. 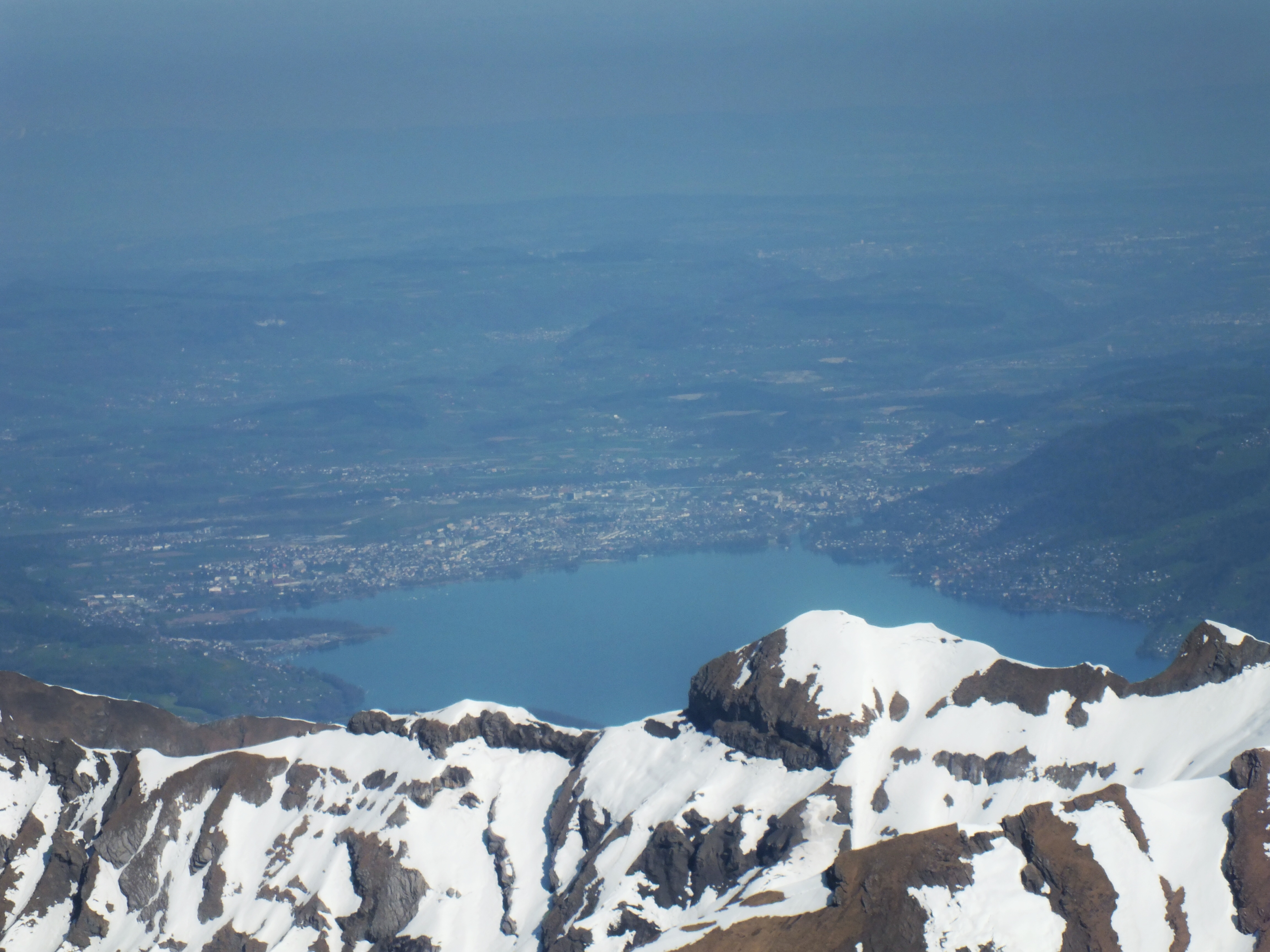 We wandered out onto the snow below the plaza and found ourselves in the middle of a large group of tourists who wanted us to wait while they took dozens of selfies and got angry if we straggled into one of the photos. After attempting politeness for a while and getting none in return, we quit caring and just went where we wanted to go. 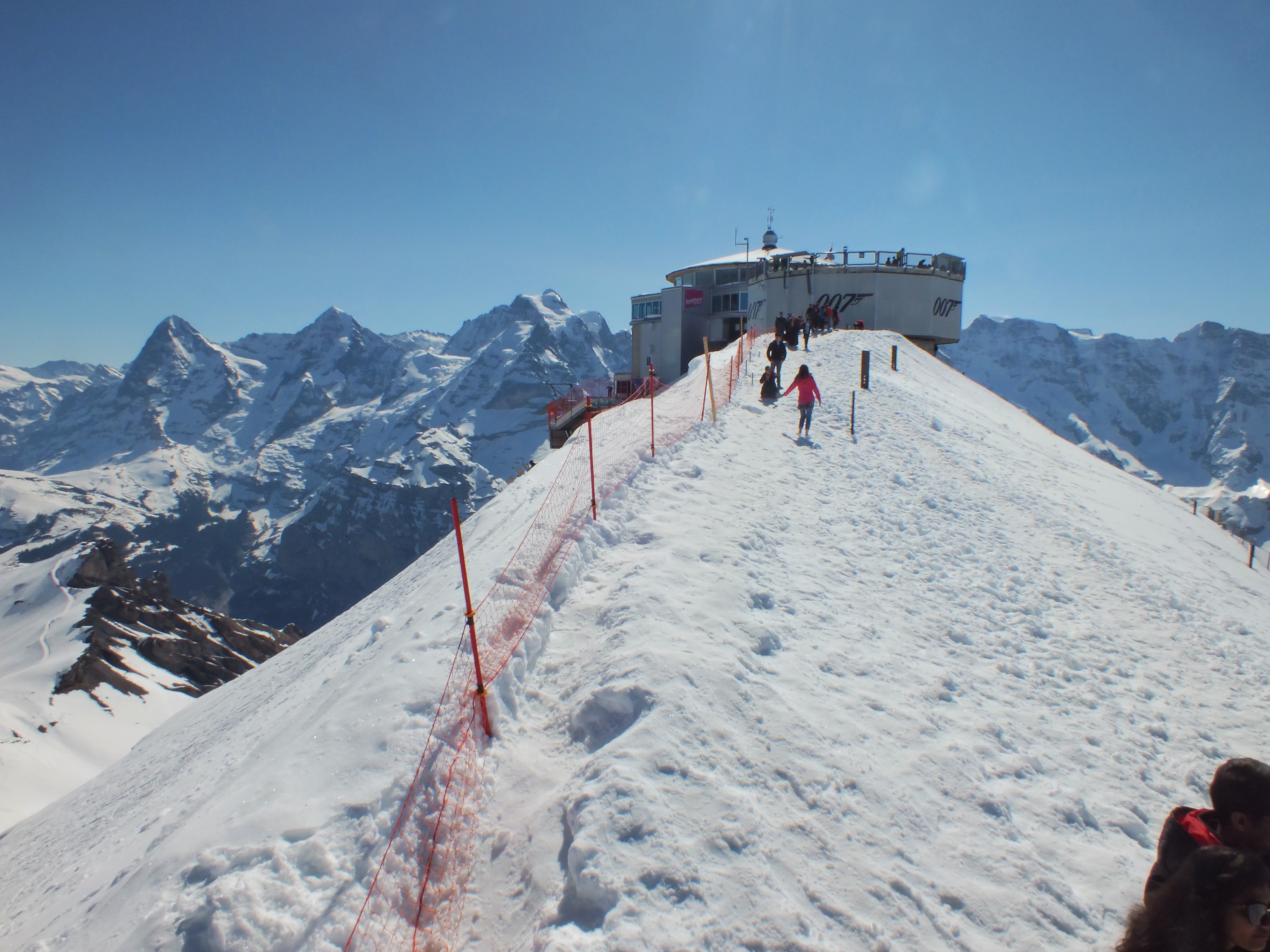 We skipped the revolving restaurant because we were still pleasantly full from our amazing breakfast. We did not, however, skip the gift shop.

There was more excitement, but this post is getting long so I’ll cut it here.

This entry was posted in Me and My Family, Movies, Museums, Scenery. Bookmark the permalink.