We set off from Colorado Springs on a Tuesday after work, headed for our annual Spring break camping trip in Arkansas. We made it through the flats of eastern Colorado with no more adventure than spilling a large glob of Taco Bell cheese on my shirt as we drove.

It was dusk as we entered Kansas and almost dark when we stopped in Colby for the night. The Hampton Inn was filled—I hadn’t made reservations because who goes to western Kansas on a Tuesday night in March—so we ended up at a worn-out, overpriced Holiday Inn Express. When I got up on Wednesday morning and looked out our window, this was the view. Something tells me we in Kansas anymore. 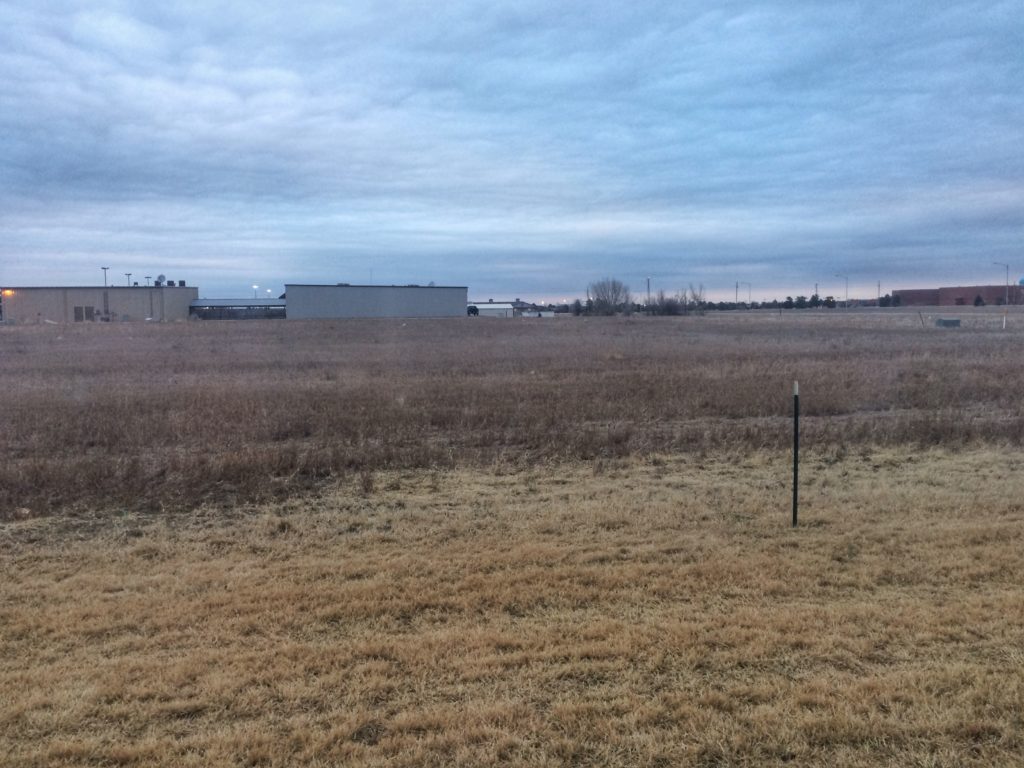 After grabbing some fruit and hard-boiled eggs at the breakfast bar, we drove about 20 miles to Oakley for donuts. Oakley appears to have been untouched since 1963, but Hey! The Annie Oakley Motel has color TV! 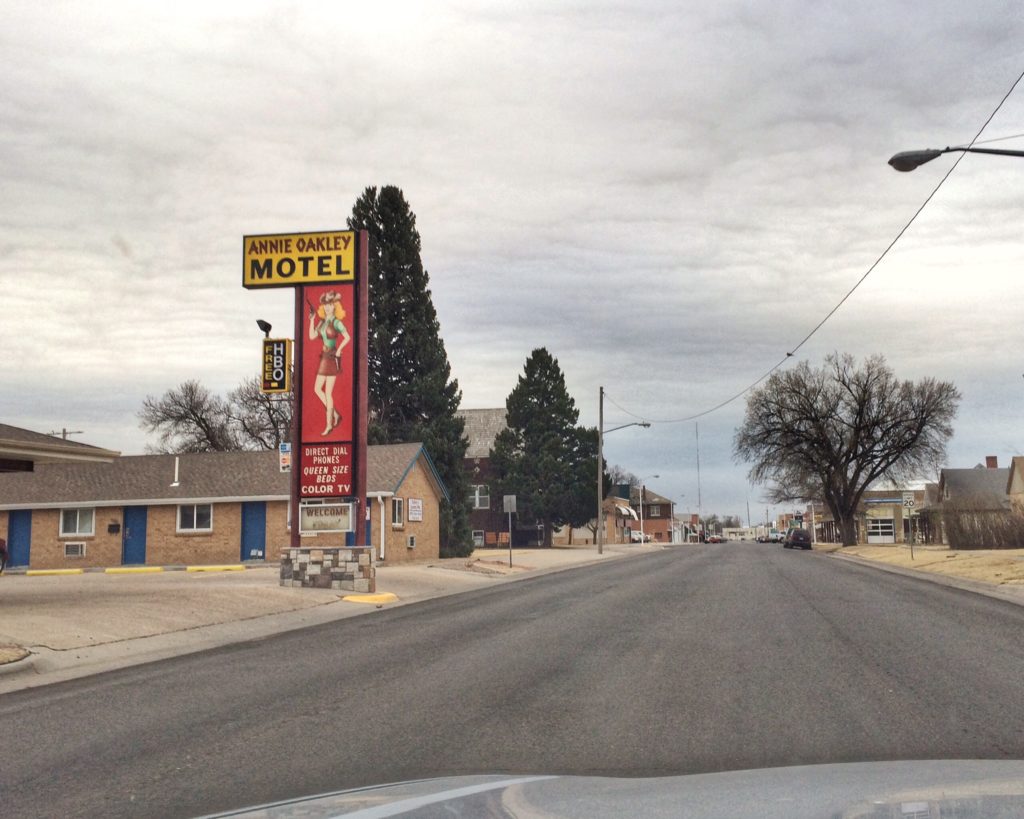 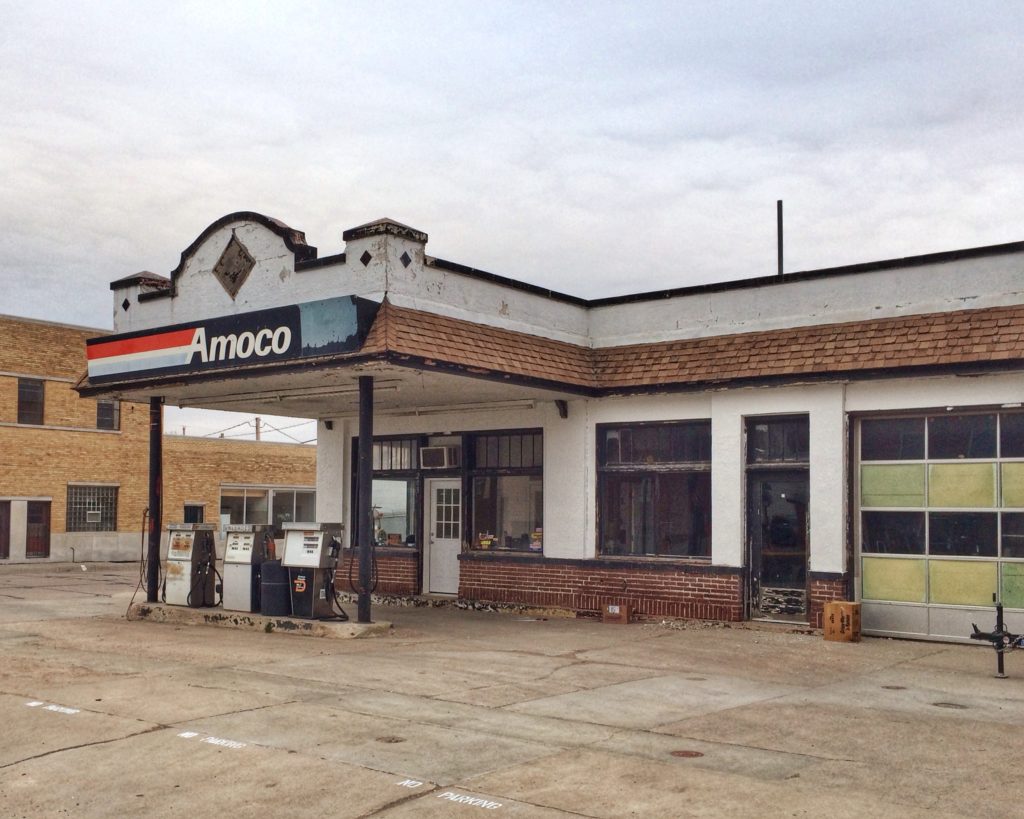 The Sunshine Bakery got good reviews for donuts. The two earnest young men inside were very nice. The donuts were average. They gave them to us in a Daylight Donuts bag, probably bought cheap from the boarded-up Daylight Donuts two doors down. 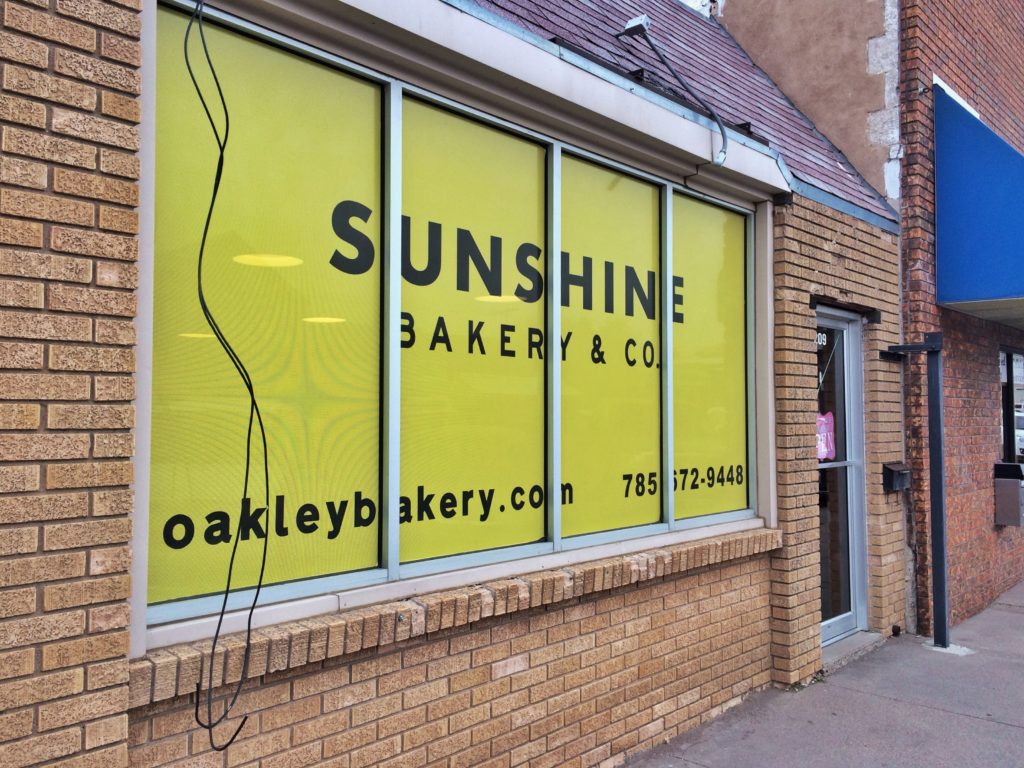 Back on the Interstate headed east. The scenery really started picking up. 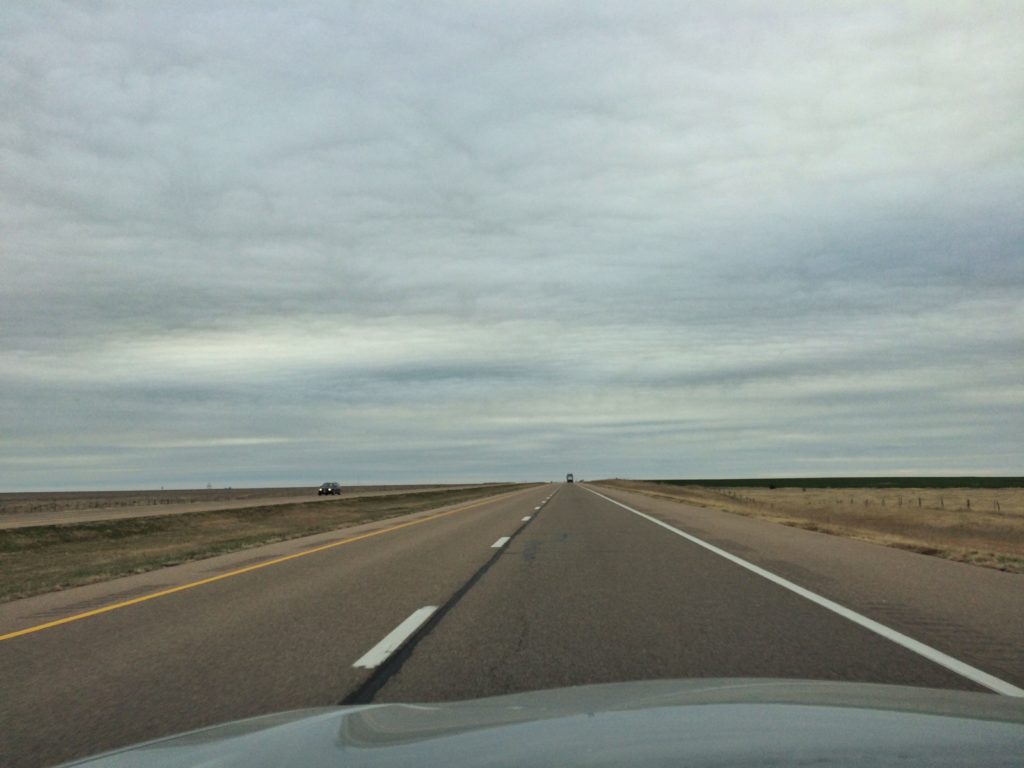 Oil wells were everywhere, especially as we got further east. They were the tallest things in view much of the time. 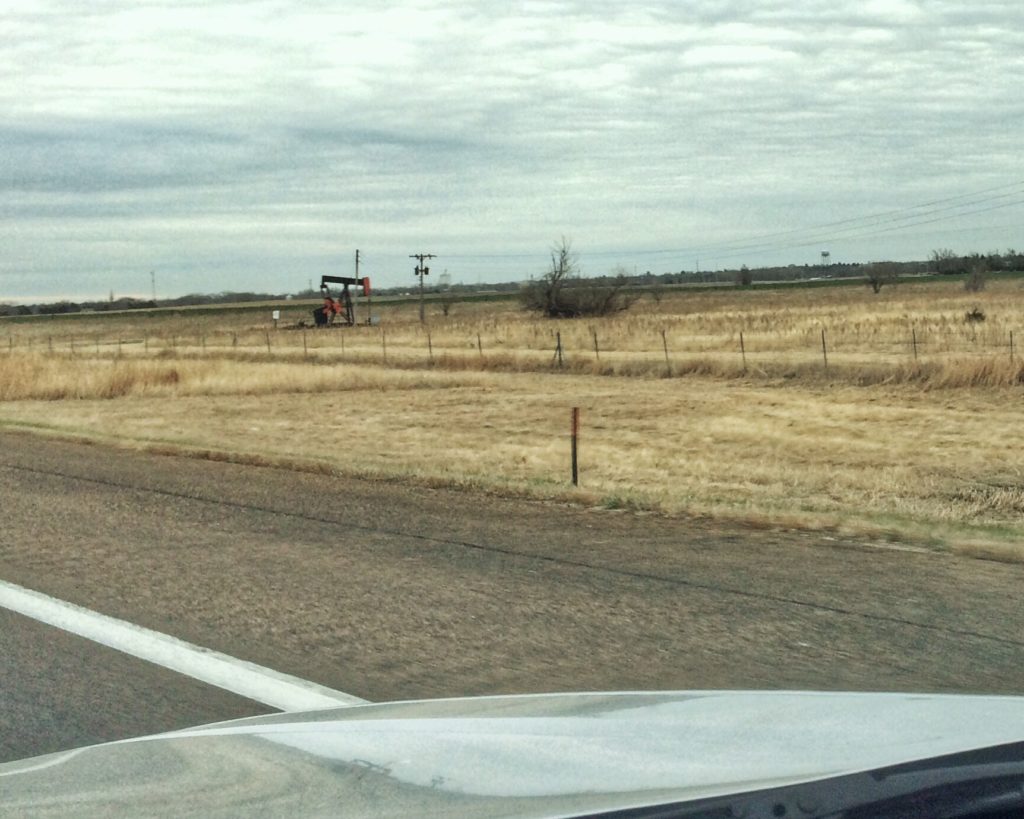 We stopped in Wichita for a late lunch at NuWay Crumbly Burgers. 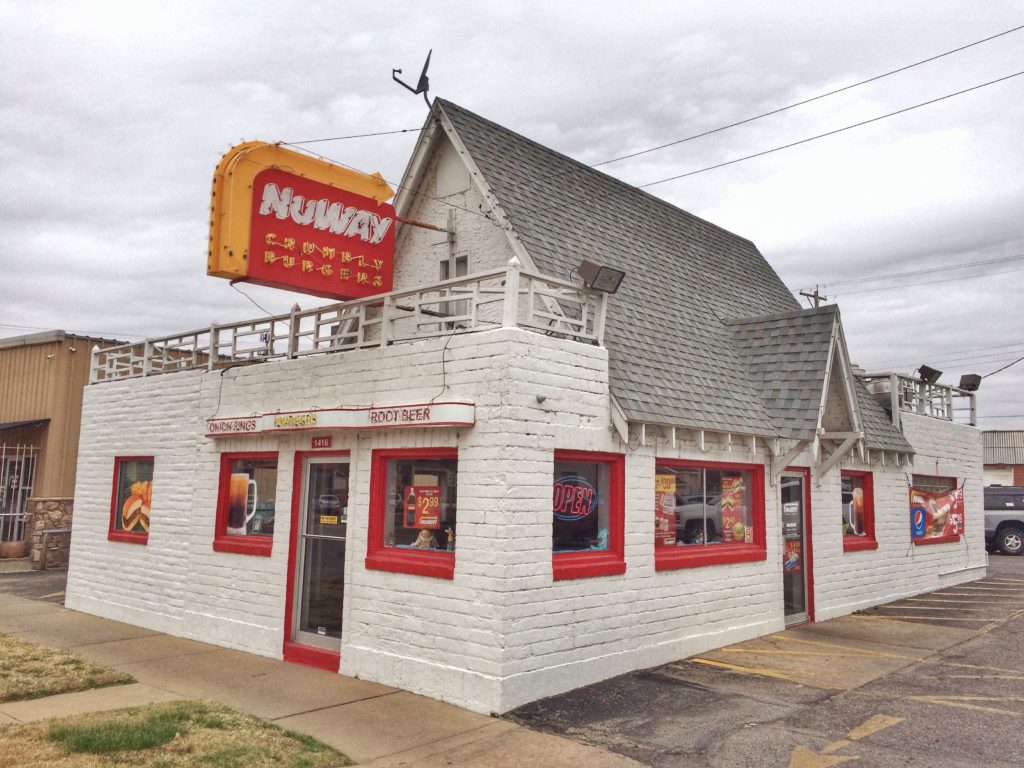 These were basically Iowa-style loose meat sandwiches. Think sloppy Joes without the sauce. They give you a fork to eat all the bits that fall out of the bun. My bacon cheeseburger was a little bland, but the root beer and onion rings were excellent. 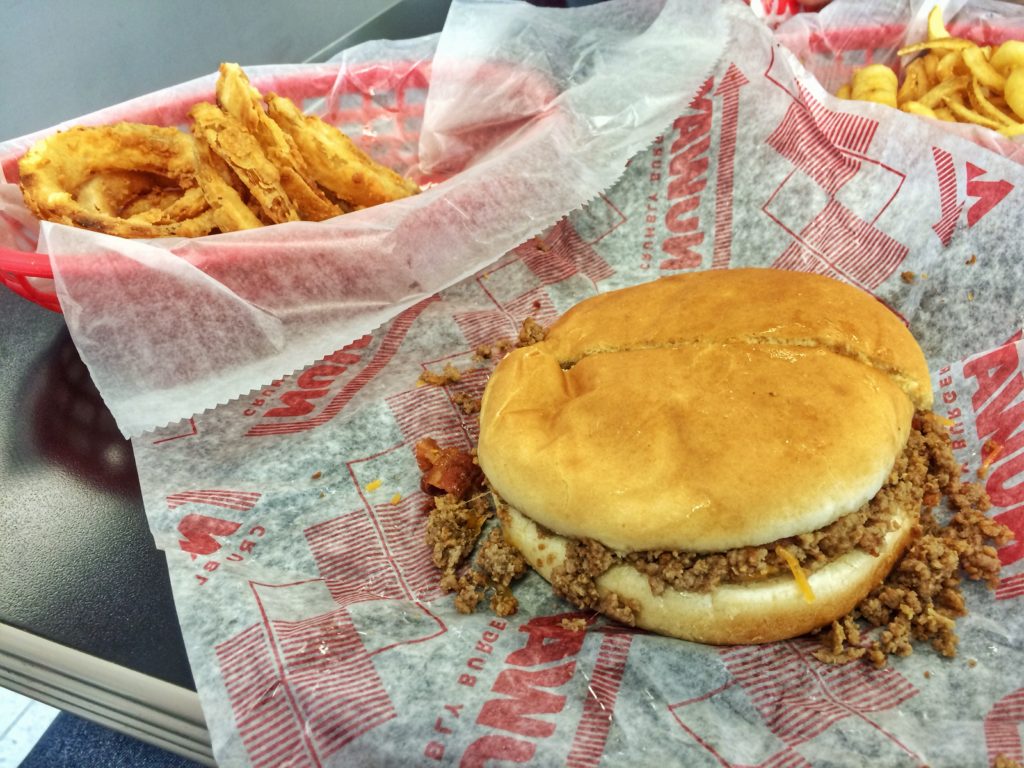 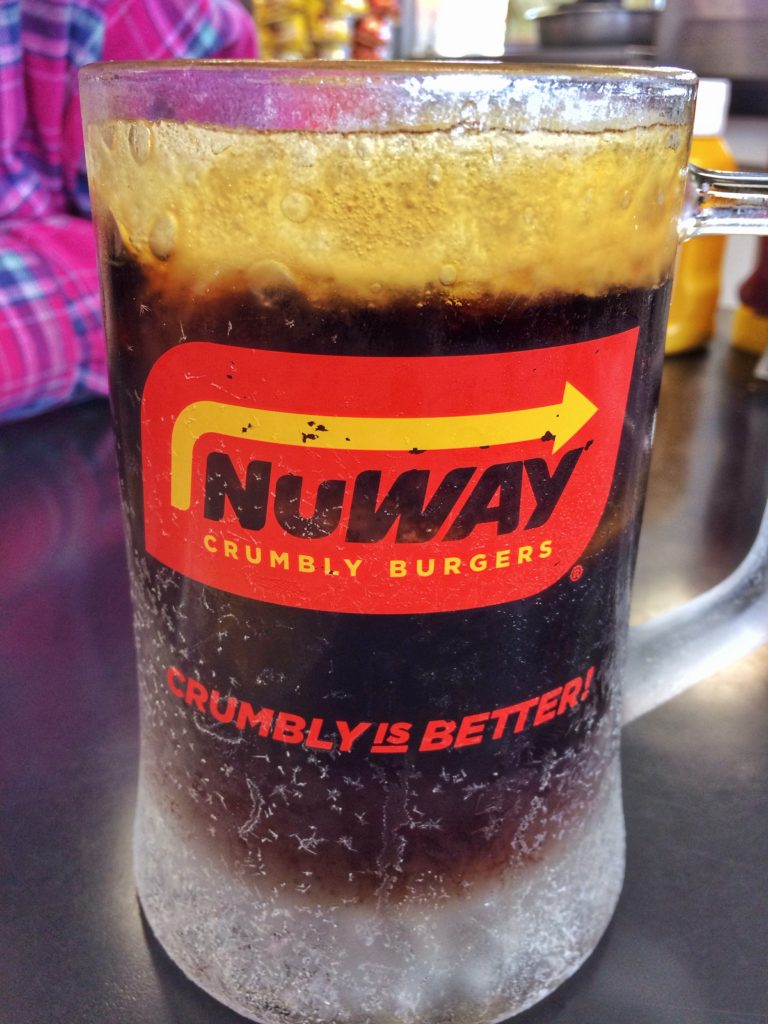 Back on the road for 200 miles of two-lane highway to Joplin, Missouri. There were a lot of trucks, which made for a lot of passing, which occasionally got interesting. I’m thankful for my six cylinders.

We passed through the famous Flint Hills. 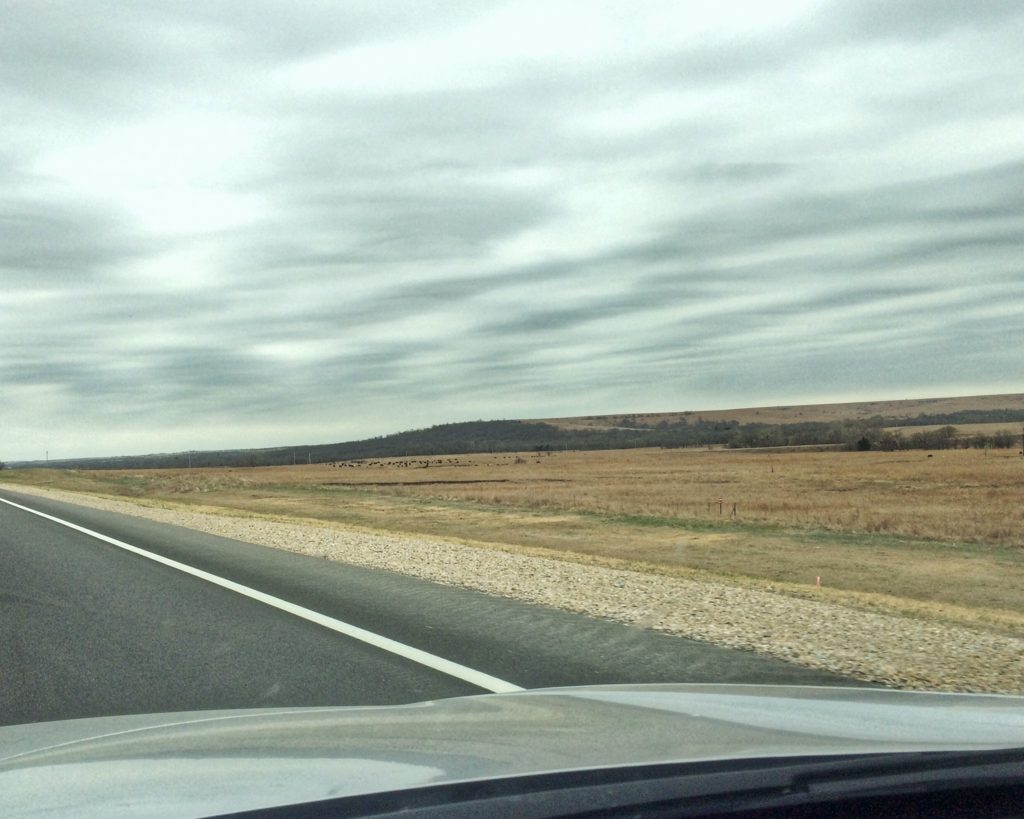 Kansas is a large state. The scenery give you the feeling that you’re going nowhere fast, which makes it seem even larger. We had to cross it again on the way home. We left Arkansas on Tuesday, March 28. This time we skipped the two-lane and drove I-40 west through Oklahoma to Oklahoma City, then cut north to Wichita. We stayed at a Hampton Inn in the suburb of Durby.

This was the view out our window this time. 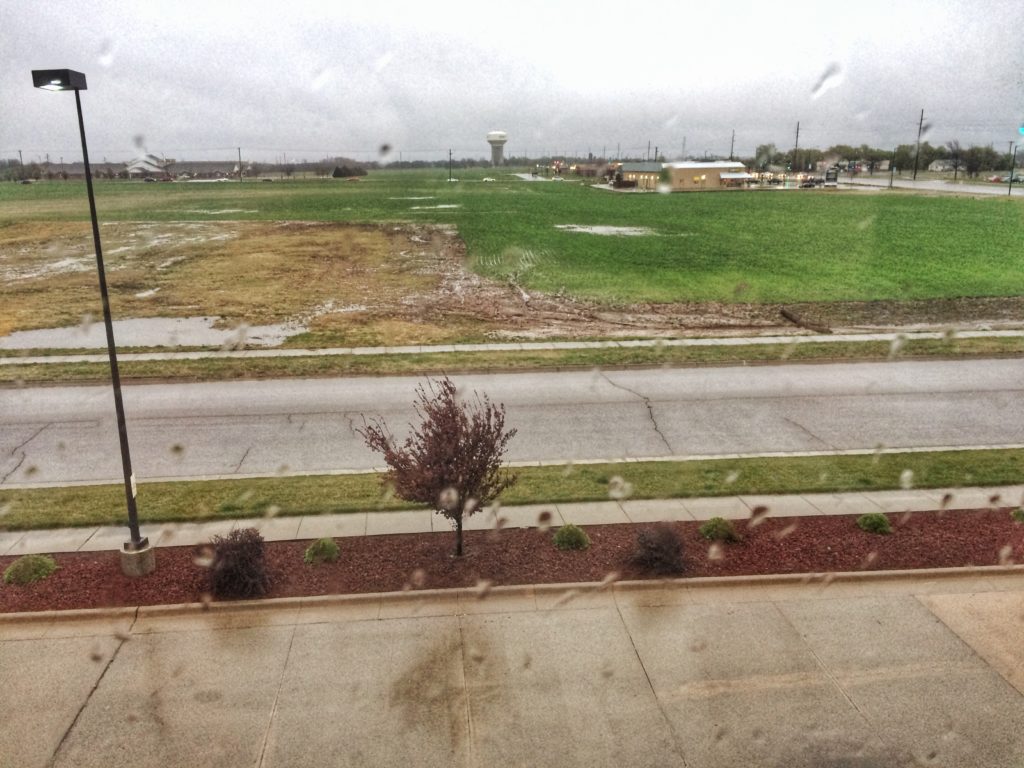 Yes, it was raining. And it kept raining all day until we got within six miles of the Colorado border.

After getting what healthy food we could find at the breakfast bar in the motel, we went to Derby Donuts. Their donuts were small (which is good) and tasty, the perfect size and taste to start the day. 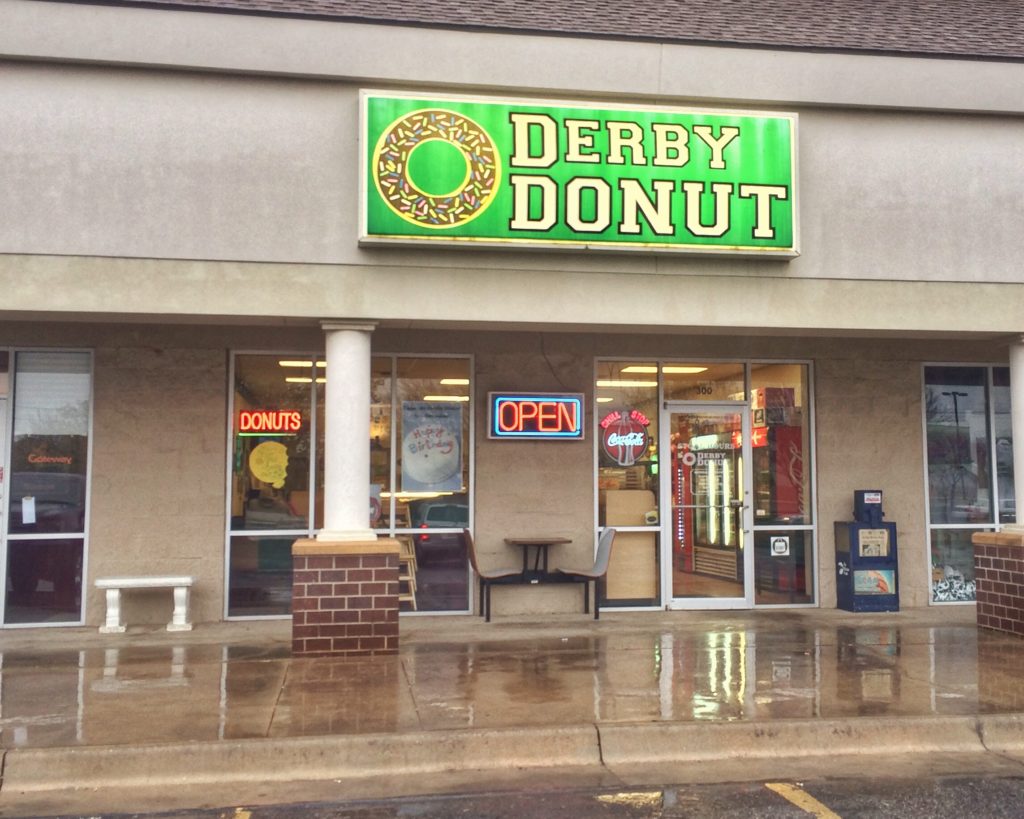 Driving was hazardous because the trucks were sending up so much spray it was impossible to see as I was passing them. I did manage to snap a photo of the world’s largest chimney sweep in McPherson as we drove by. 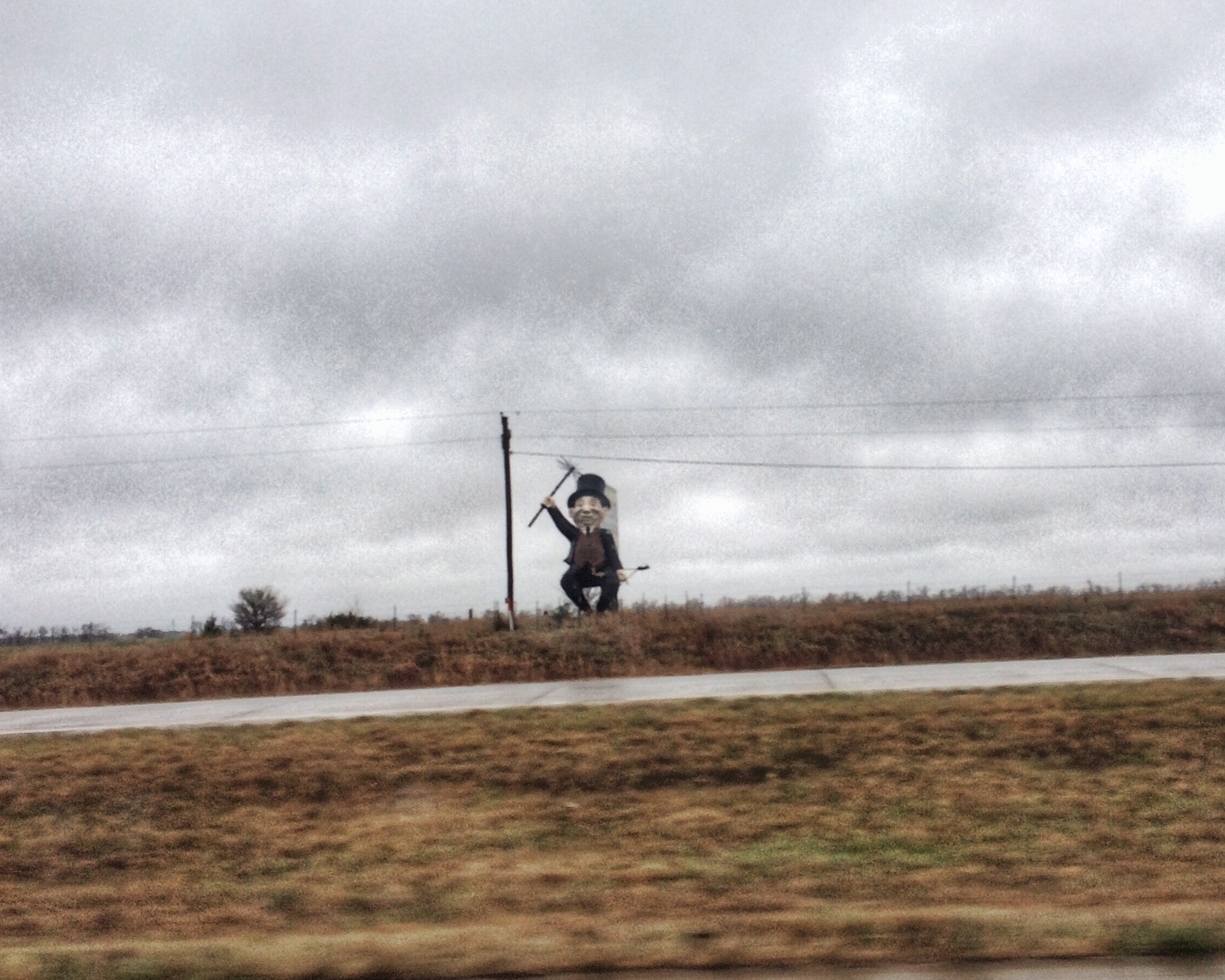 We turned west at Salina, onto I-70, and then got off to drive 18 miles north to Lucas.

I’ll cover the exciting attractions of this town in other posts. I’ll just tease you here with this: the World’s Largest Souvenir Plate. 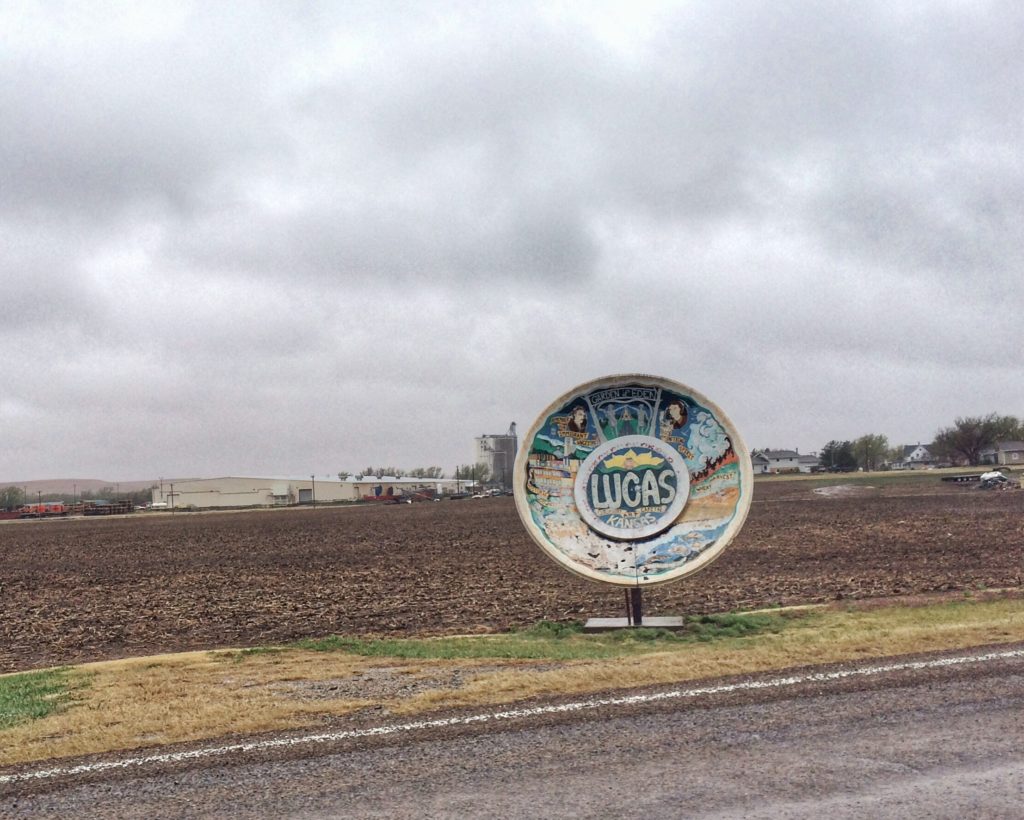 After lunch at Sonic in Russell, we got ack on the highway and back to the scenery. 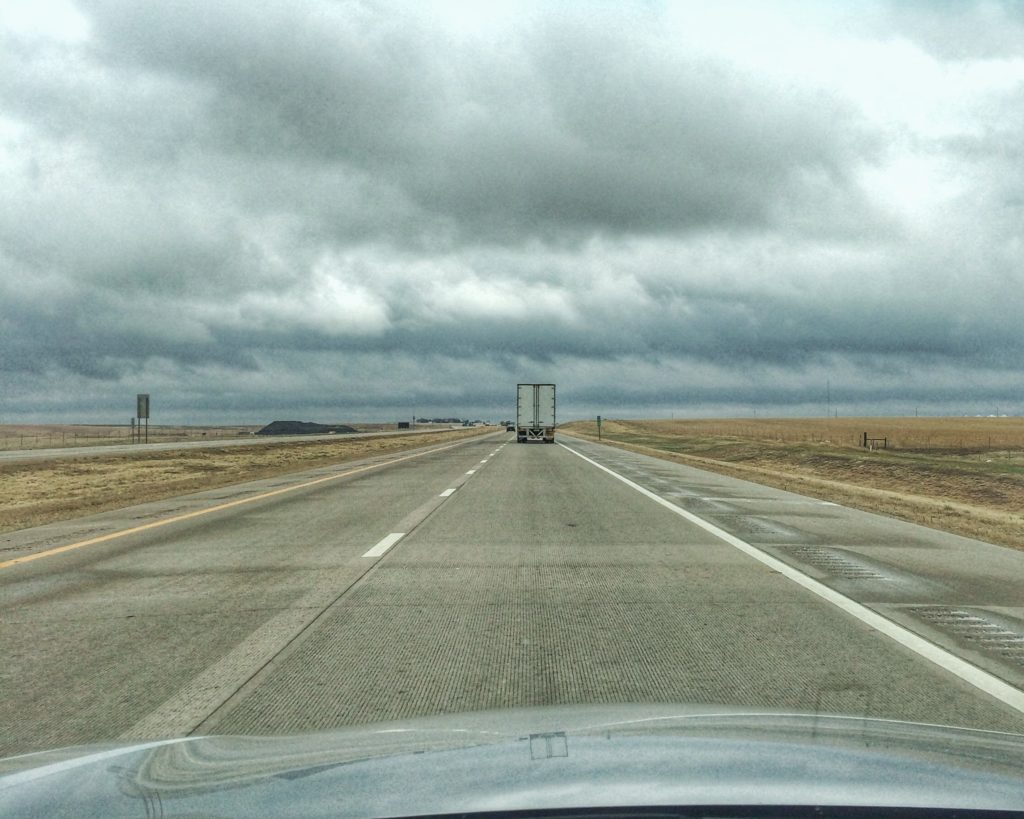 We made one last stop, in Goodland, to see the World’s Largest Easel, displaying Van Gogh’s Sunflowers. 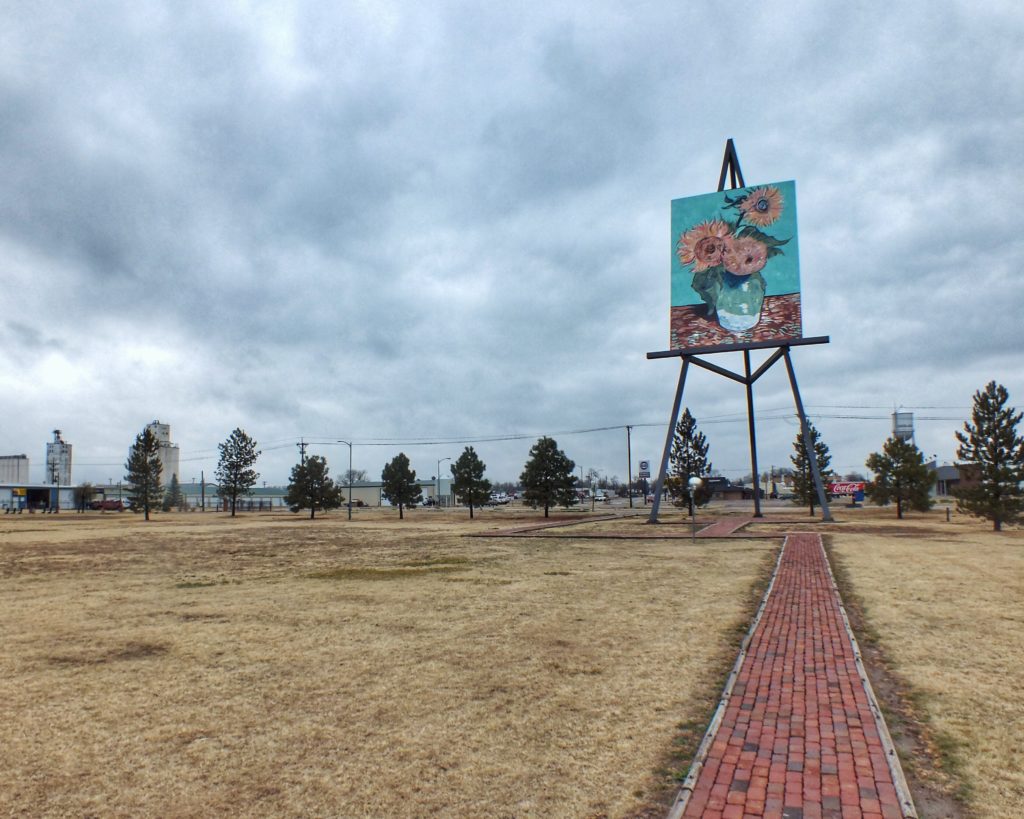 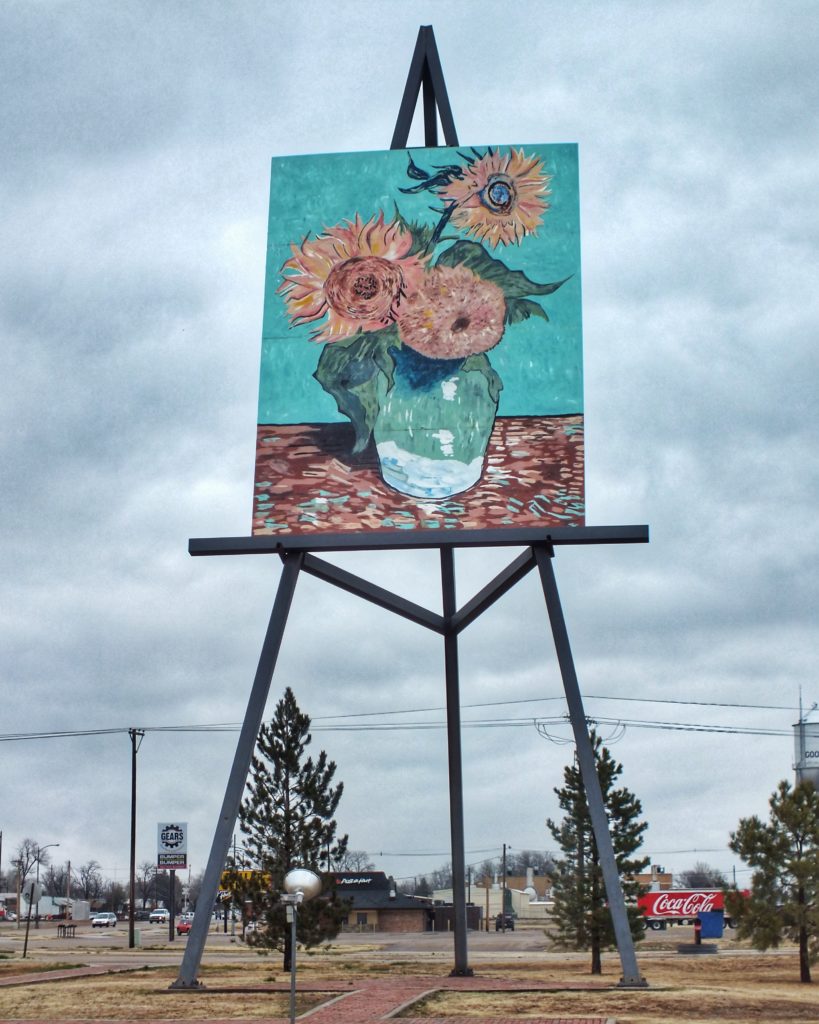 Finally, against all odds, the state came to an end. Boredom is subjective, but for scenic interest, Kansas holds it’s own against Illinois and Indiana. 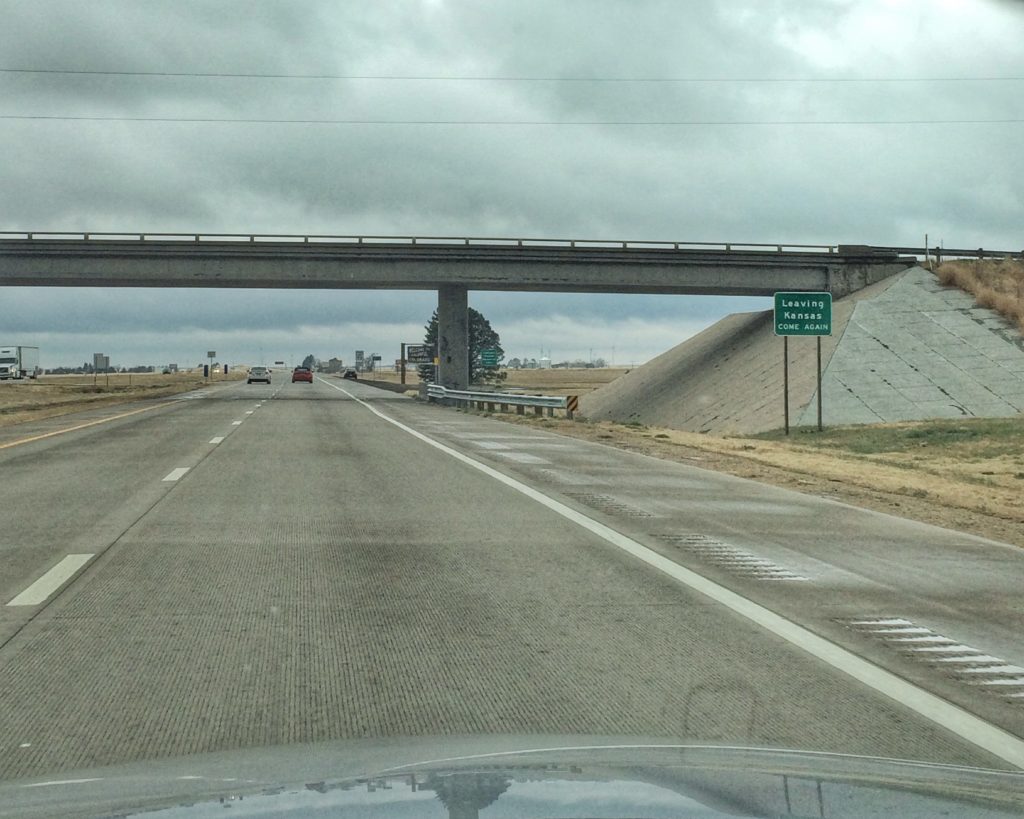