It was only an hour to Sikeston where we were eating lunch, so we had some time to kill. And it was raining. We sat in the parlor of Summers Riverview Mansion while we looked on our phones for something to do in Paducah. At almost the same moment, we each found a place called Apple Valley Hillbilly Garden & Toyland. It looked weird, but we like weird. We asked Henk if he knew anything about it, and he highly recommended it. I thought perhaps we should call in advance to see if they were open on a rainy March Sunday morning, but Henk said not to bother. “Just pull in. Somebody will come out and give you a tour.”

It wasn’t far — or it wouldn’t have been if I hadn’t missed the exit. When we arrived, we found this. 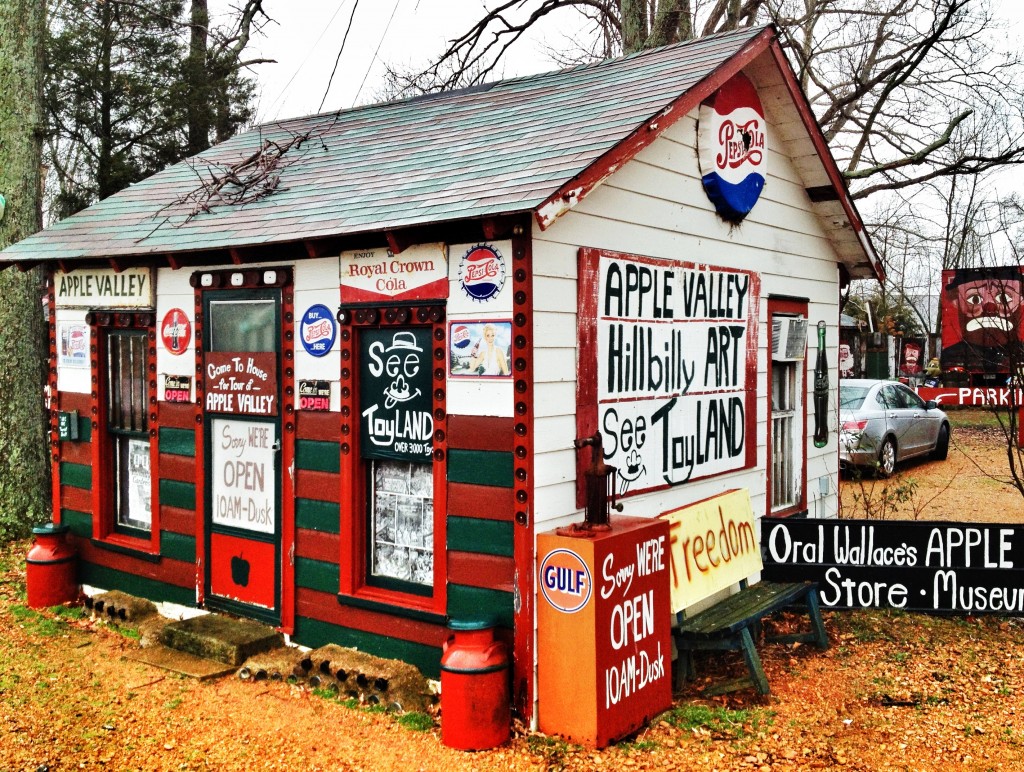 We parked and began wandering around the yard, but nobody came out of the house. It looked dark inside. It was just a few minutes past 10:00, when the sign said it opened. After getting about as wet and cold as I wanted to be, I tried the door of this little shed. It was opened, and a light was on inside, so I entered.

It was chaos, but amazing chaos. There were toys and signs and souvenirs and antiques all mixed together into total sensory overload. I figured I wasn’t supposed to be in there, so I started taking pictures as fast as I could before I got in trouble. 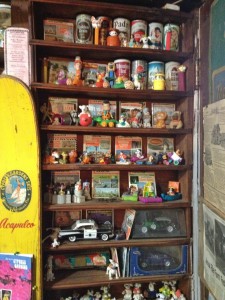 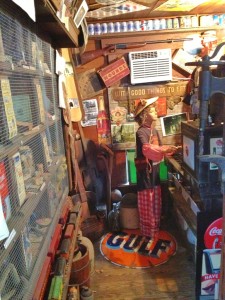 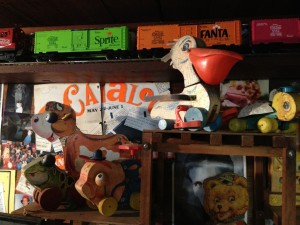 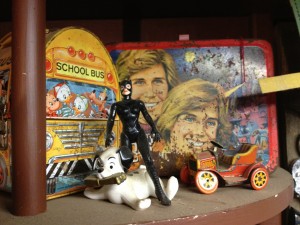 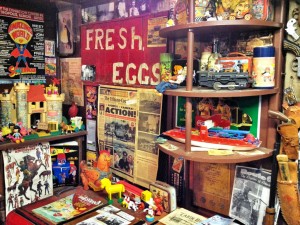 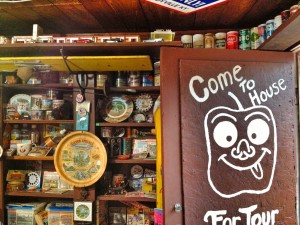 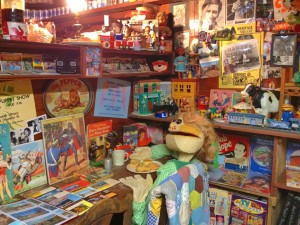 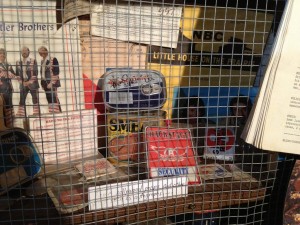 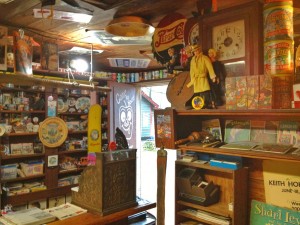 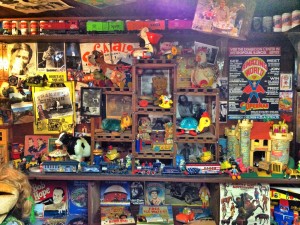 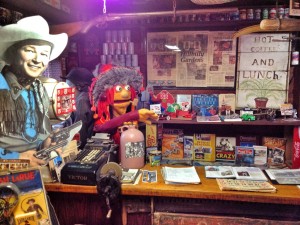 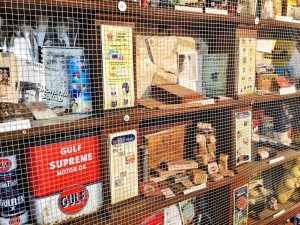 One of the displays behind the wire netting included a hand-written sign that read, “Hung out with Angelina Jolie 1986-1987 — Stuff touch by her …”

I looked it up — Angelina Jolie was 11 at the time. 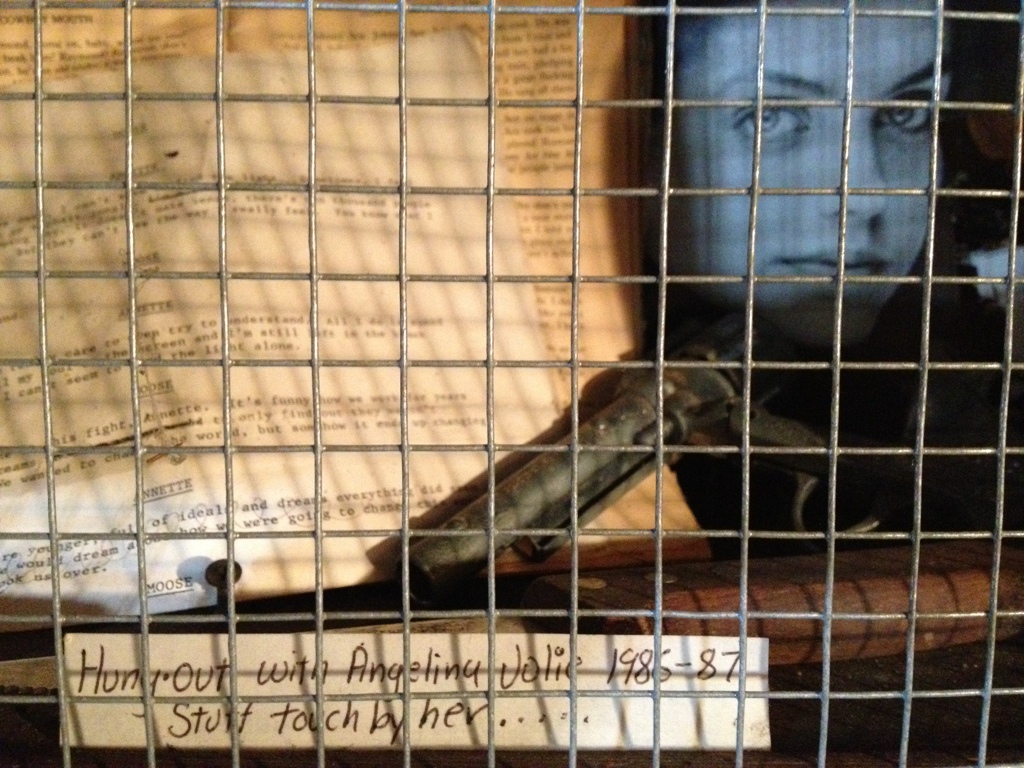 I could have spent three days in there reading old magazines and looking through scrapbooks and taking photos. But I figured I was pressing my luck, so I left. The others had gotten their fill of wandering the grounds and we were standing near the cars. My friend walked behind another shed to photograph some turkeys and a dog started barking. A guy came out of the house in a black leather jacket and gray sweatpants and apologized for not realizing we were there. He offered us a tour and we accepted. Our first stop was the shed that I’d already been in. 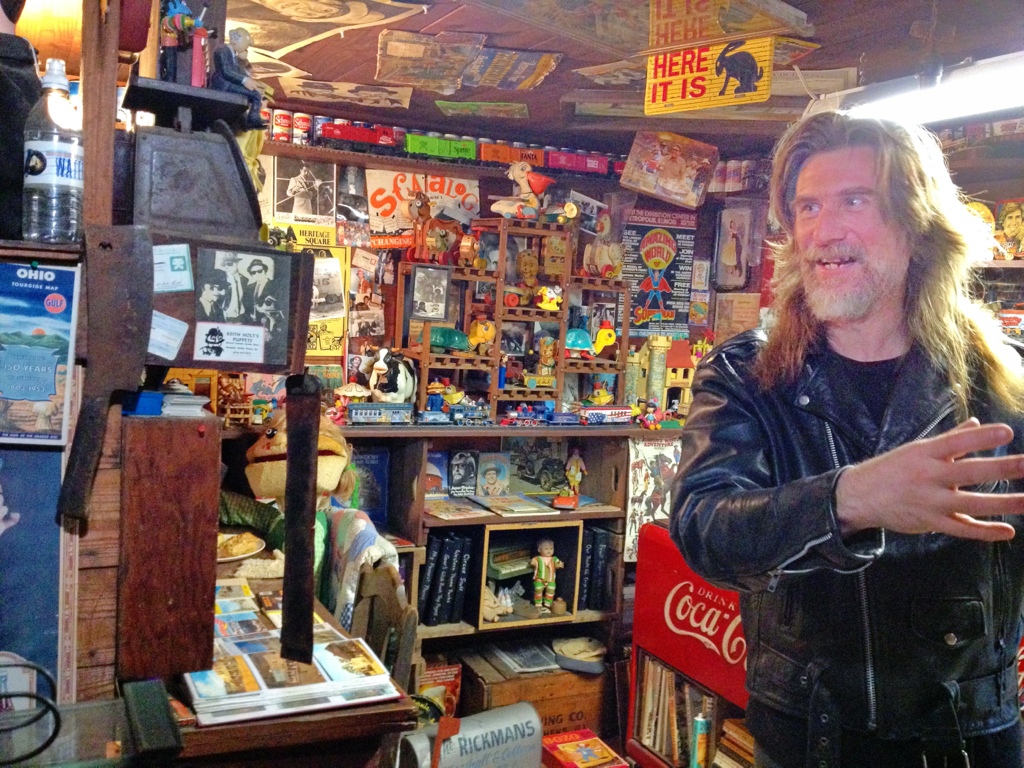 His name is Keith Holt, and it turns out that there is some purpose to the chaos. The shed used to be a Gulf gas station run by Keith’s grandfather. At the same time, in the same building, he operated a barber shop, an apple cider store, and a small diner that served fried chicken. Bits and pieces of this history are mixed in with pieces from Keith’s 20 years in Hollywood as a puppeteer, comedian, some-time actor (he played a Romulan in an episode of Star Trek Next Generation), and model train craftsman. One of his goals is to create a tribute to the tacky and odd roadside attractions that were found around America before the Interstates made travel dull. That explained the souvenirs that were on display. Keith talked very fast and gave us a great deal of information in a very short time.

This entry was posted in Historic Buildings, Pop Culture. Bookmark the permalink.