After visiting National Parks on four of the previous five days, we had it down to a science—sort of. We grabbed a raspberry scone at a Moab bakery and were at the park entrance just after dawn. Too early, as it turned out. The booth where we expected to pay our $30 fee wasn’t manned yet. A sign on the window instructed us to pay in the visitor center. But the visitor center wasn’t open yet. A sign on the door told us to fill out a self-pay envelope, put the money inside, and stick it through a slot in a box.

At the entrance station for other parks, we were informed that they preferred payment by card. So we weren’t expecting to have to come up with $30 in cash. My wallet contained several $20s. My wife had a $5. We scoured the change compartment in the car and managed to come up with another $5 in coins—mostly dimes and nickels. We were able to cram all of it into the envelope, but the envelope didn’t fit through the slot in the box.

After trying for a couple minutes, I got to a point where I couldn’t push the envelope in or take it out. Which meant that nobody else would have been able to pay. There were other people gathered around by this time waiting to pay. Fortunately, they all thought it was rather funny. I finally managed to force the envelope through the slot after a kind man stepped up and shook the entire box.

We headed straight to the Windows section of the park. There were two trails there we wanted to hike. The first wound past the North and South Window Arches and the Turret Arch. 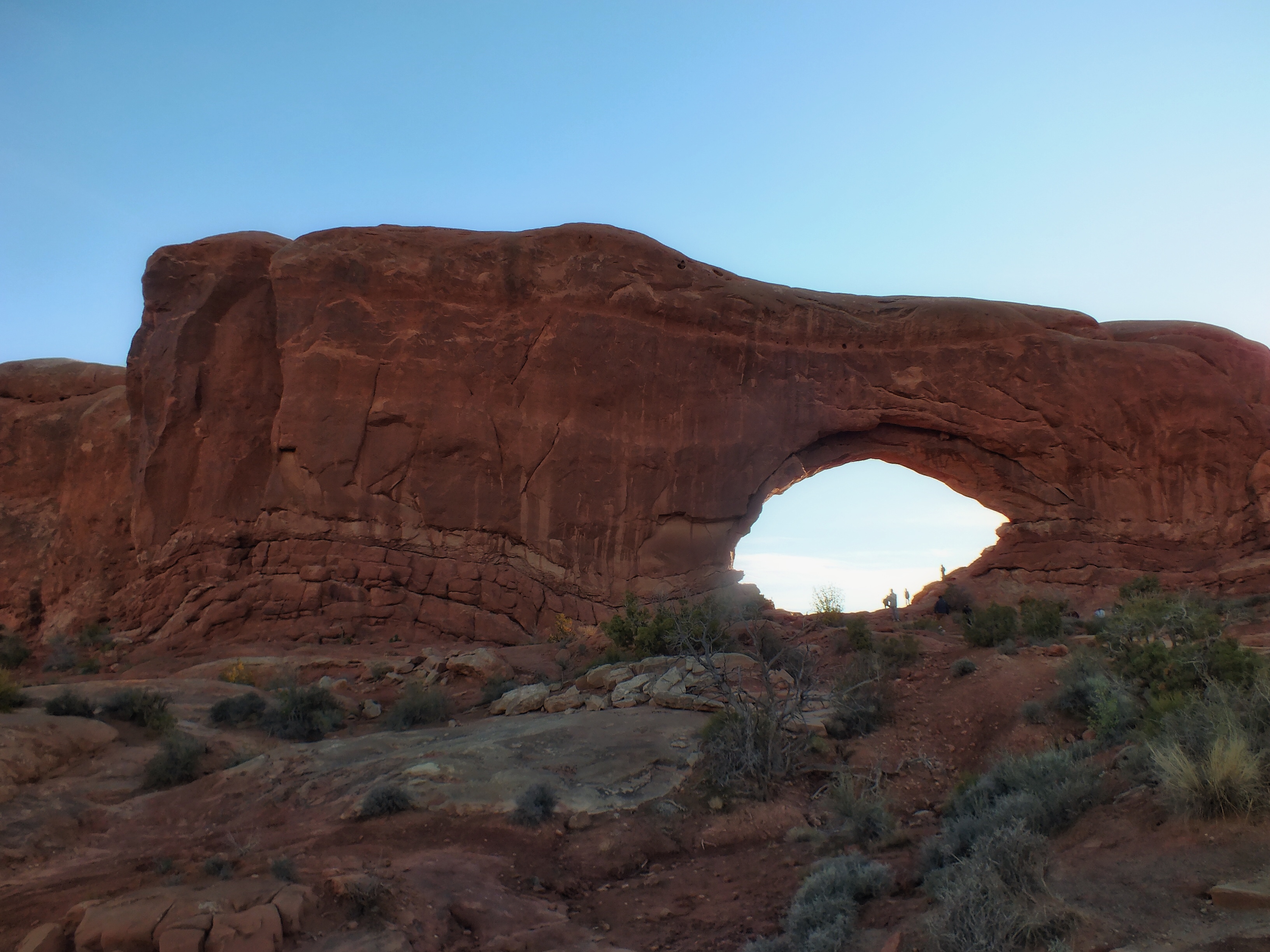 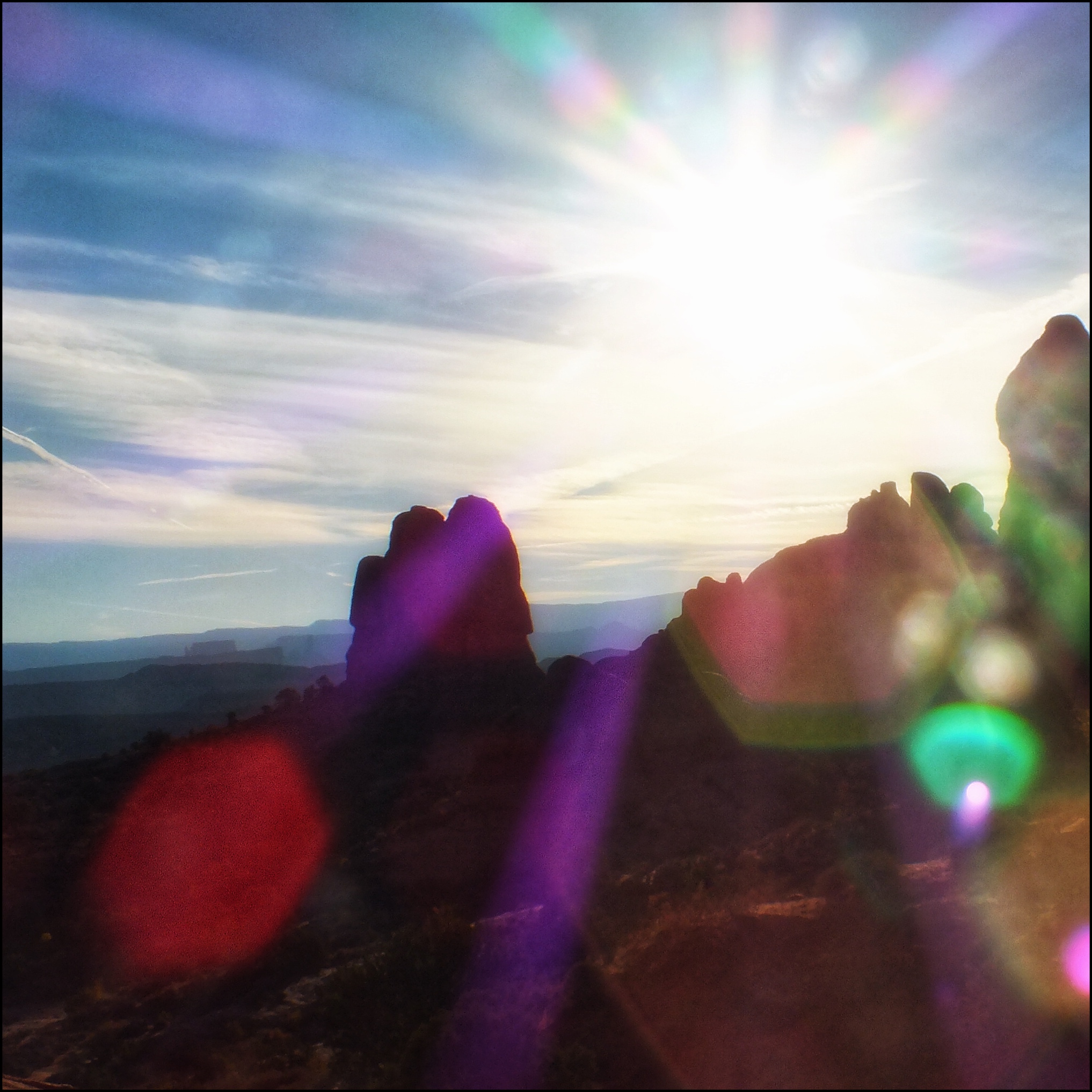 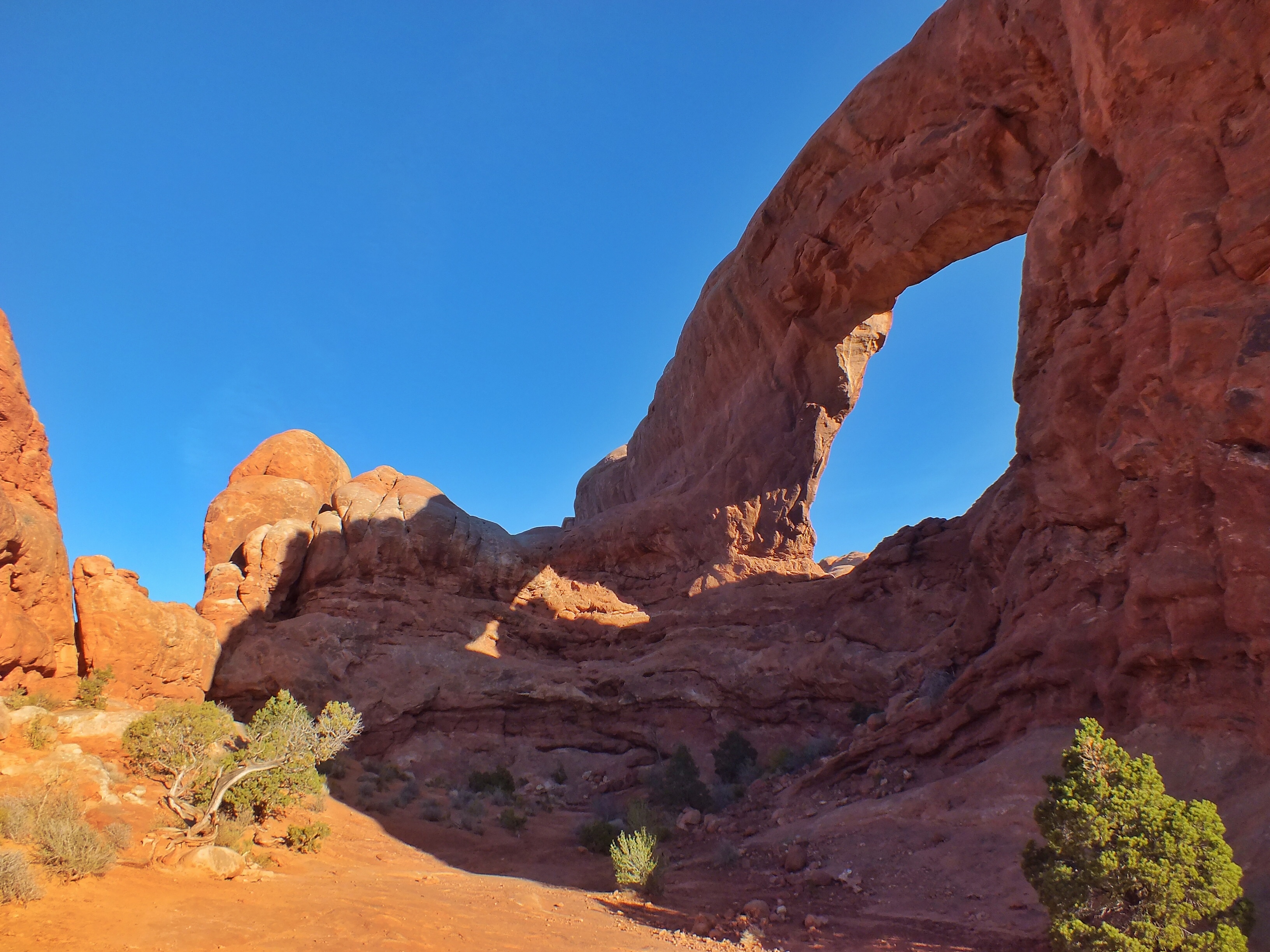 Both of them from in front of Turret Arch 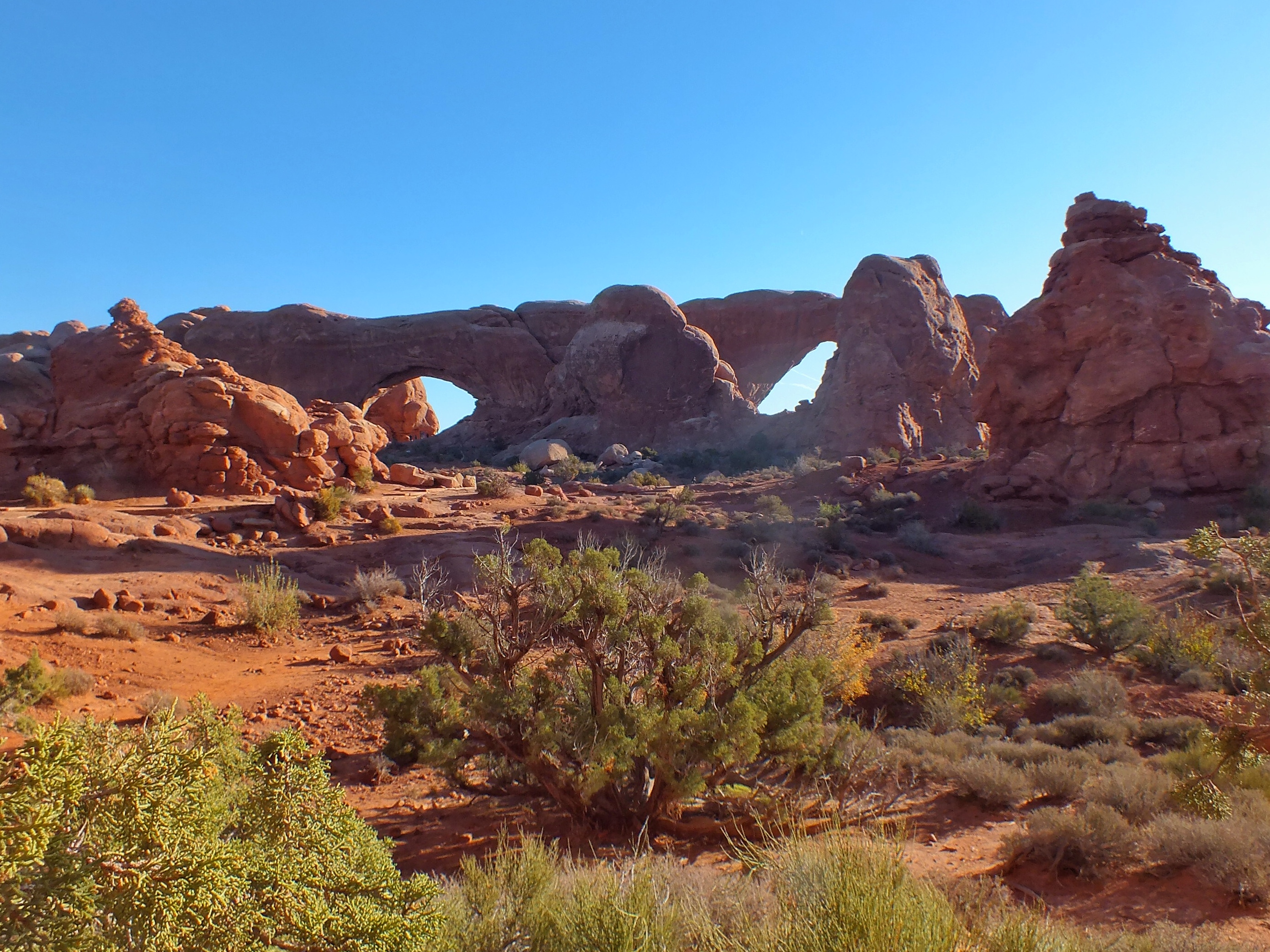 And both of them through Turret Arch 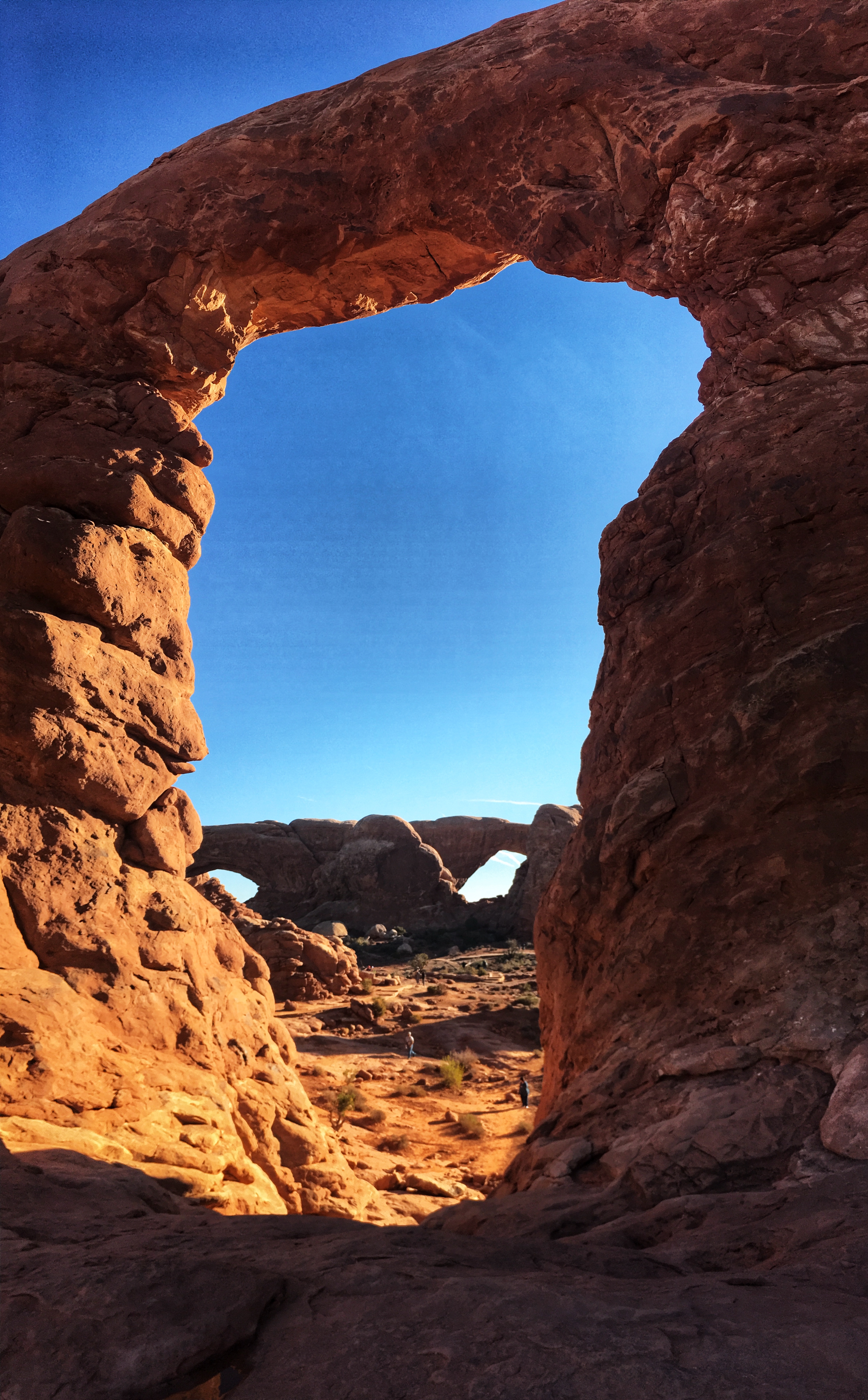 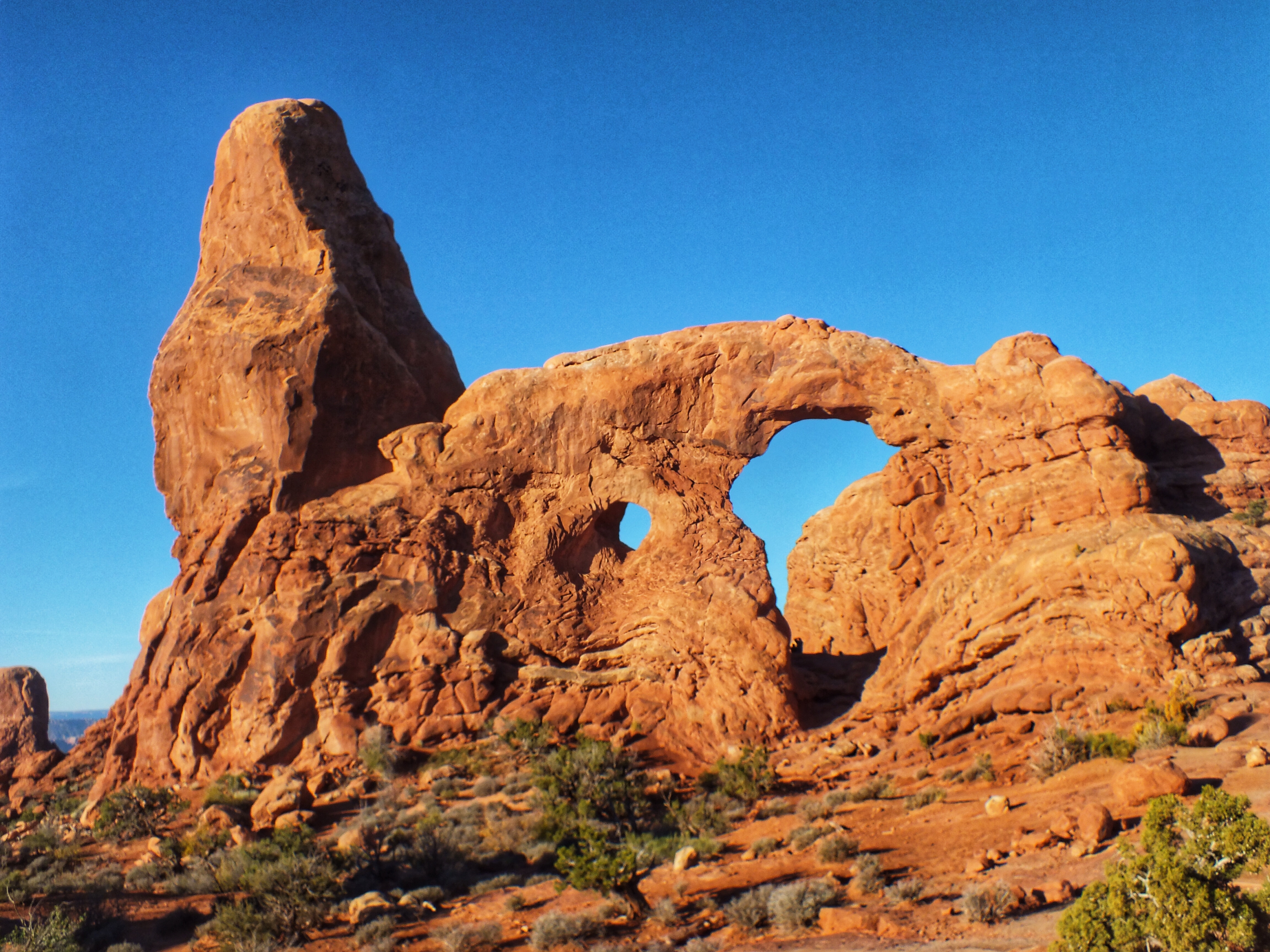 We crossed the parking lot and walked to Double Arch, which was maybe half a mile from the others. Here’s the formation. 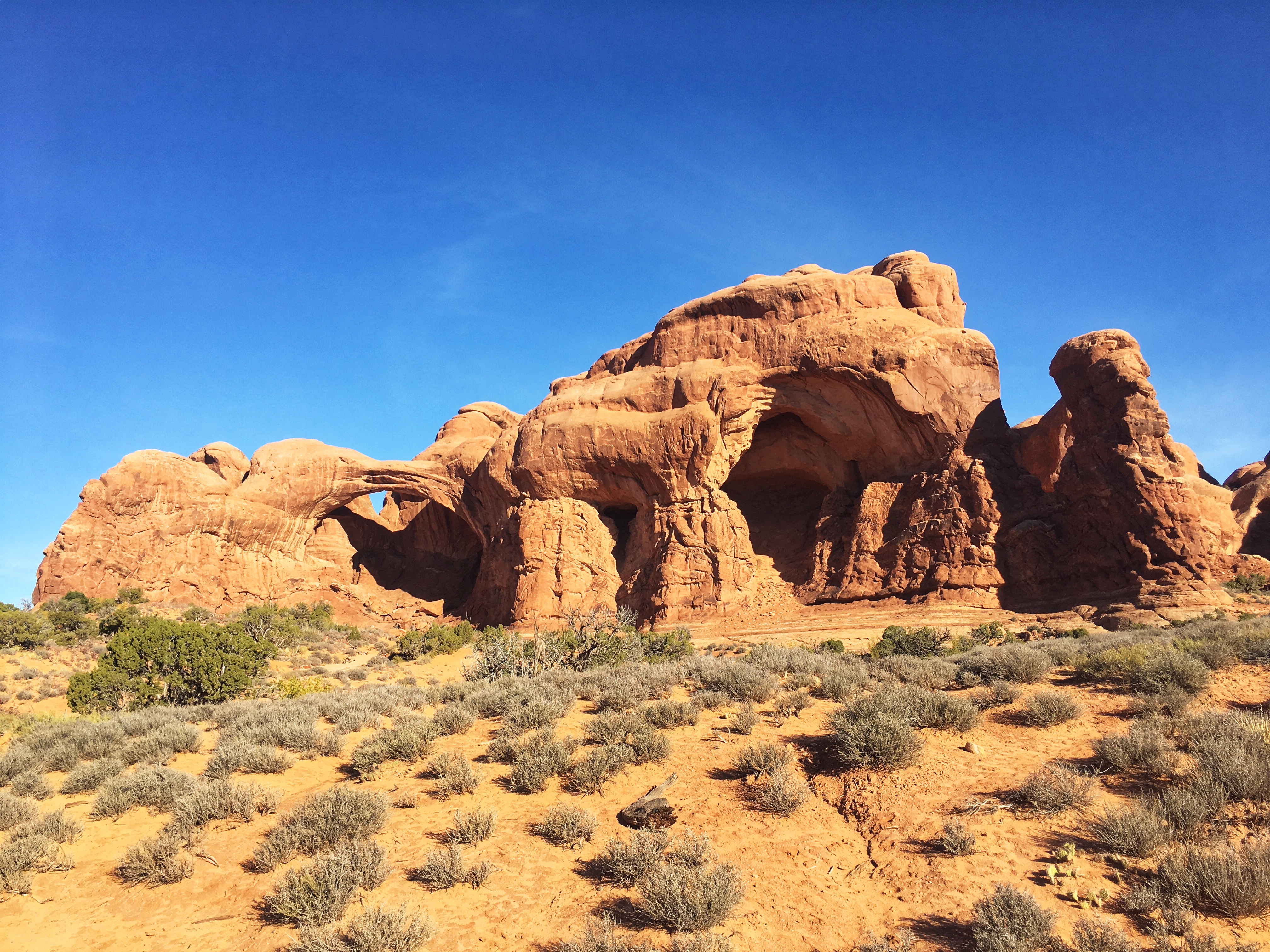 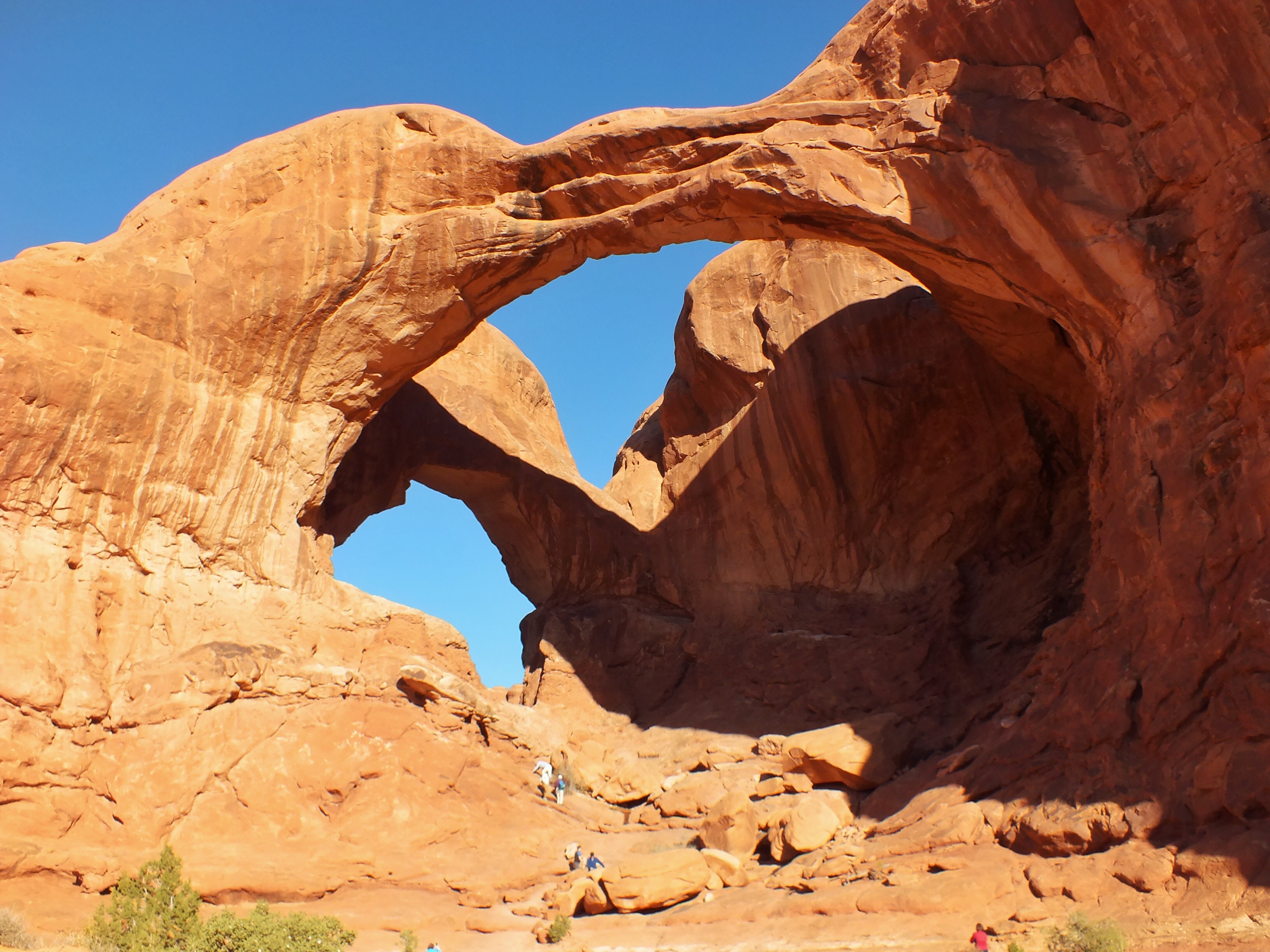 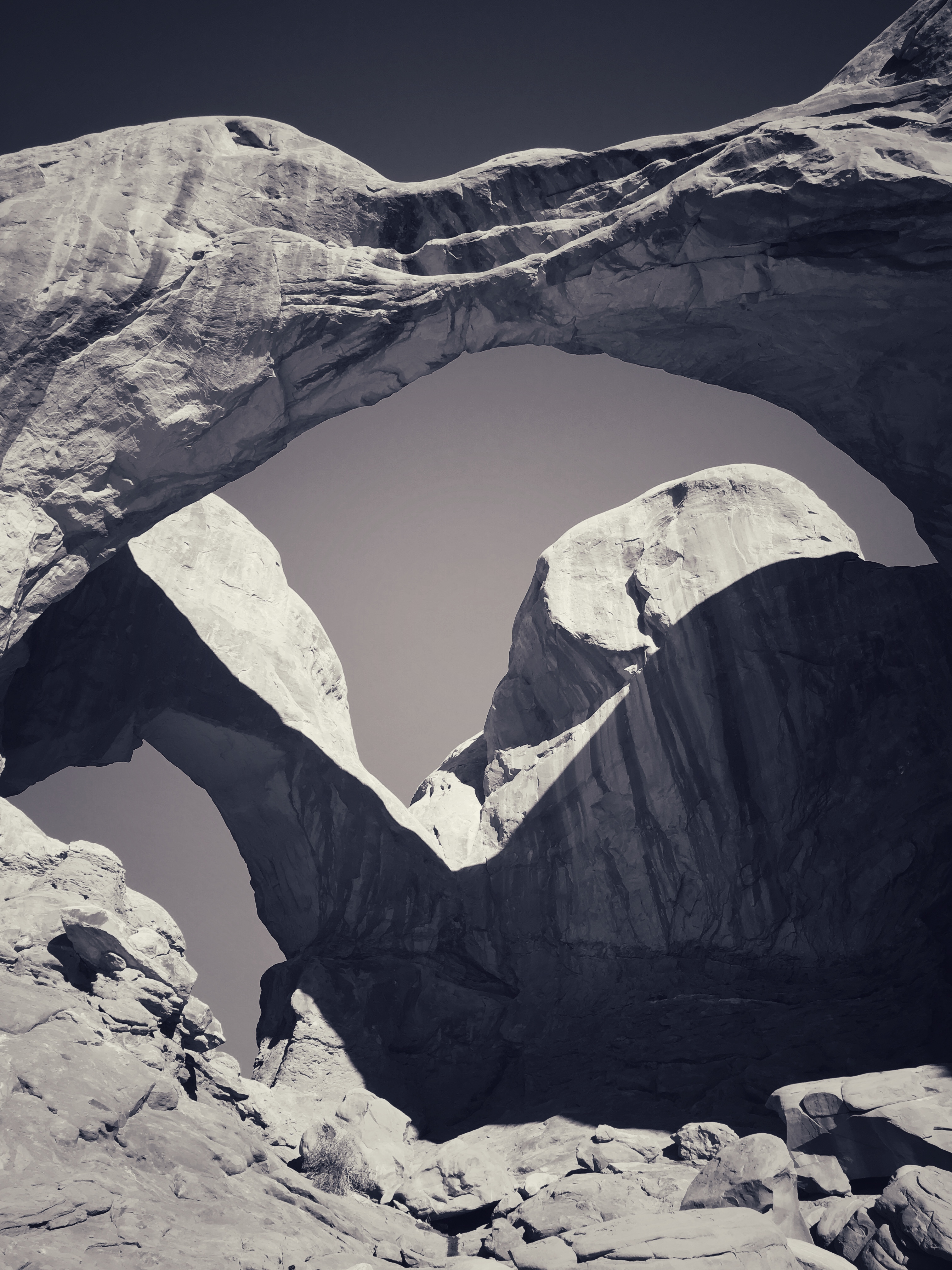 Other stuff in the area. We thought this row of rocks looked like men or monkeys staring into the distance. 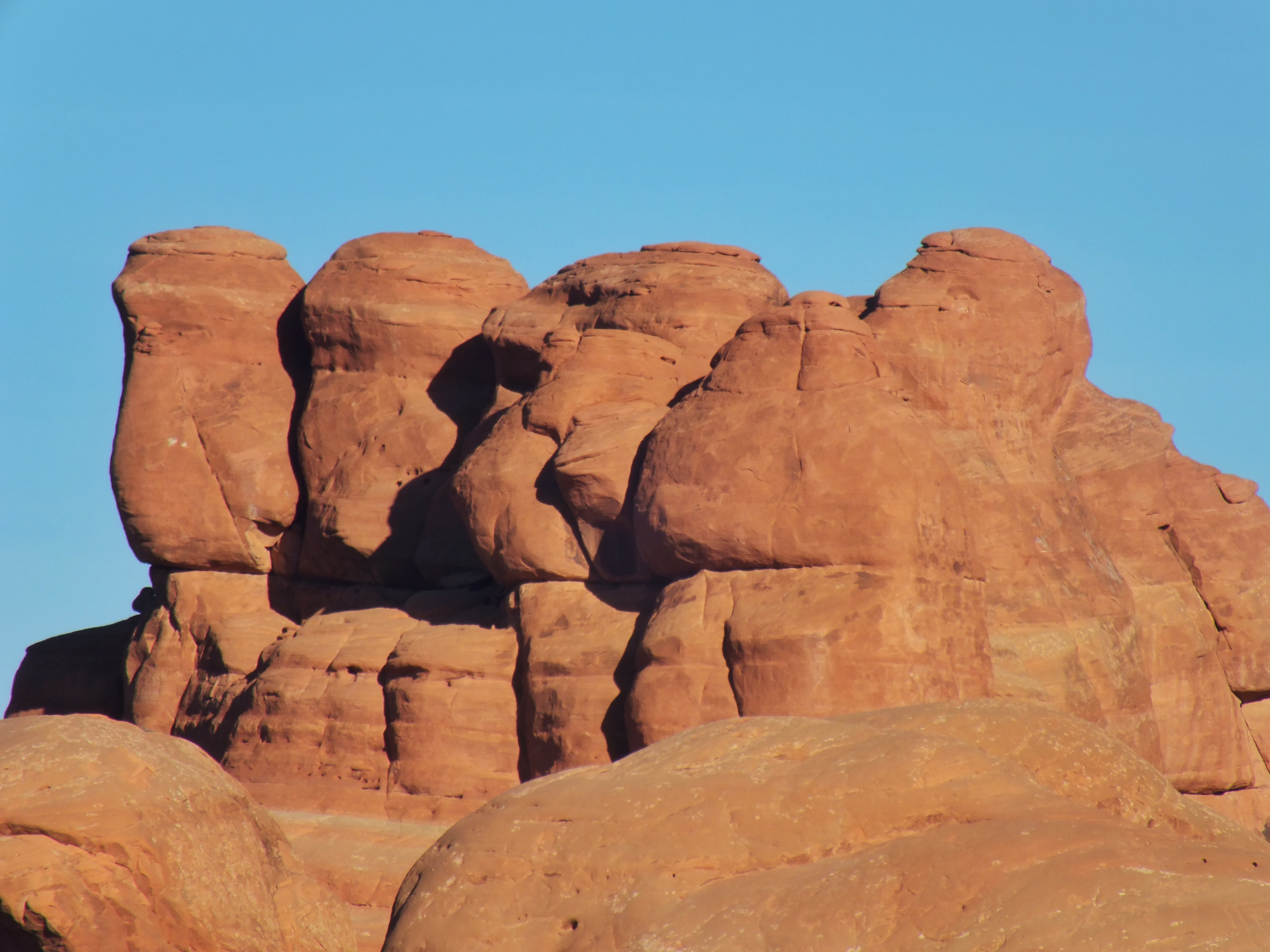 There are 2,000 documented arches in the park, although some of these are described in the park brochure as “cracks.” This one wasn’t named, that I could see. 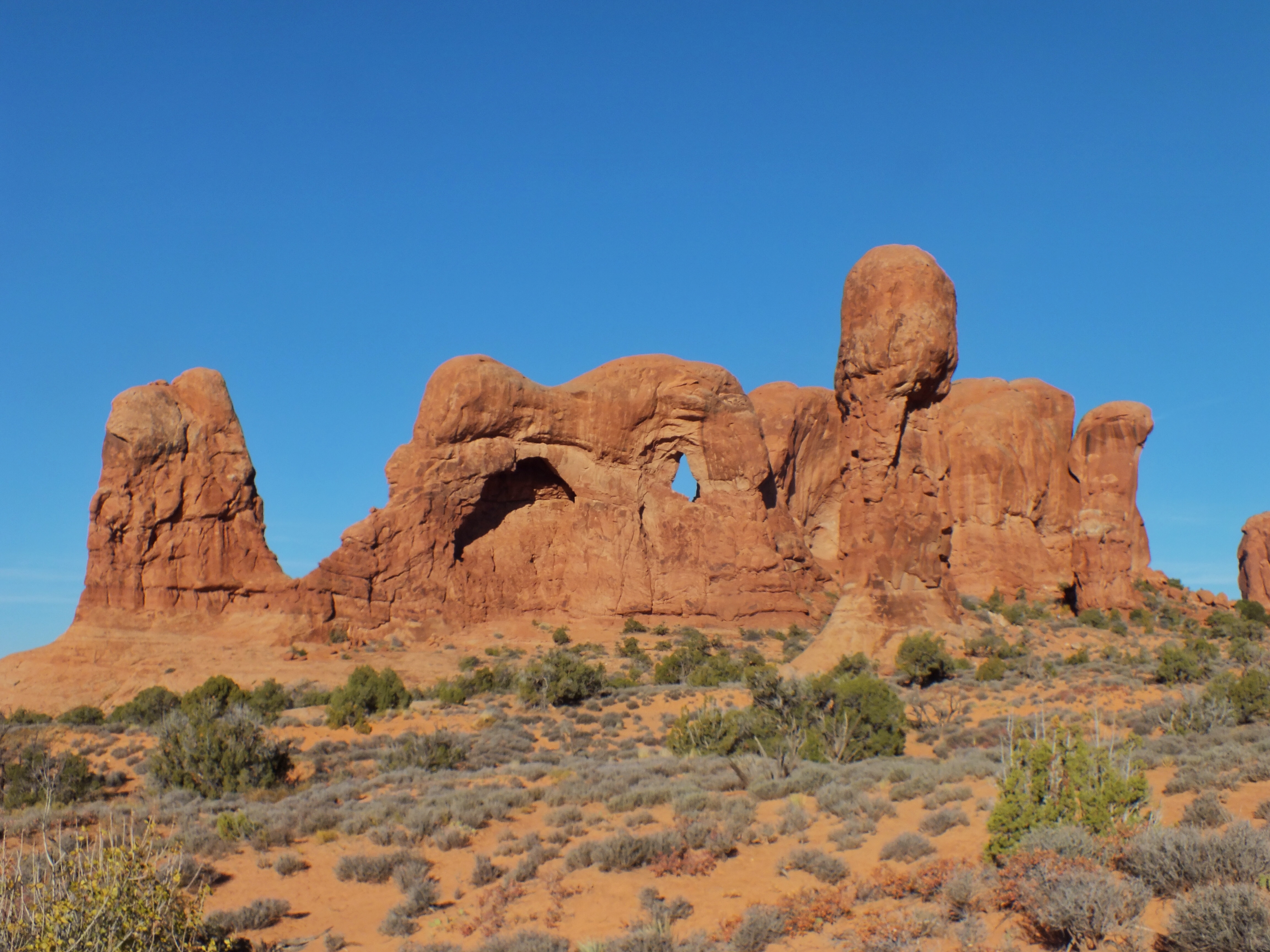 Part of the Garden of Eden formation. 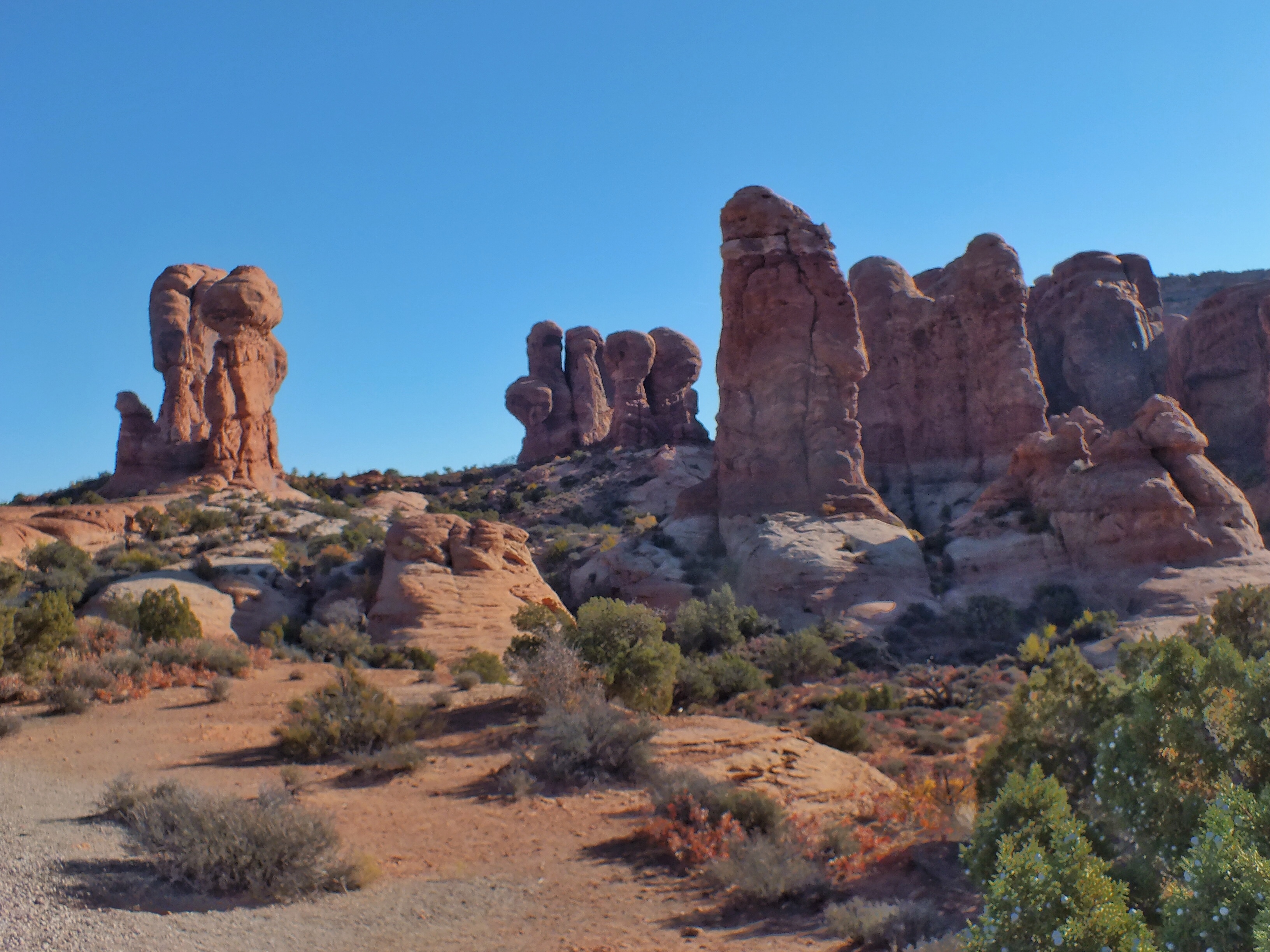 We passed Balanced Rock several times during the day. Here’s a shot I took as we drove by early in the morning. 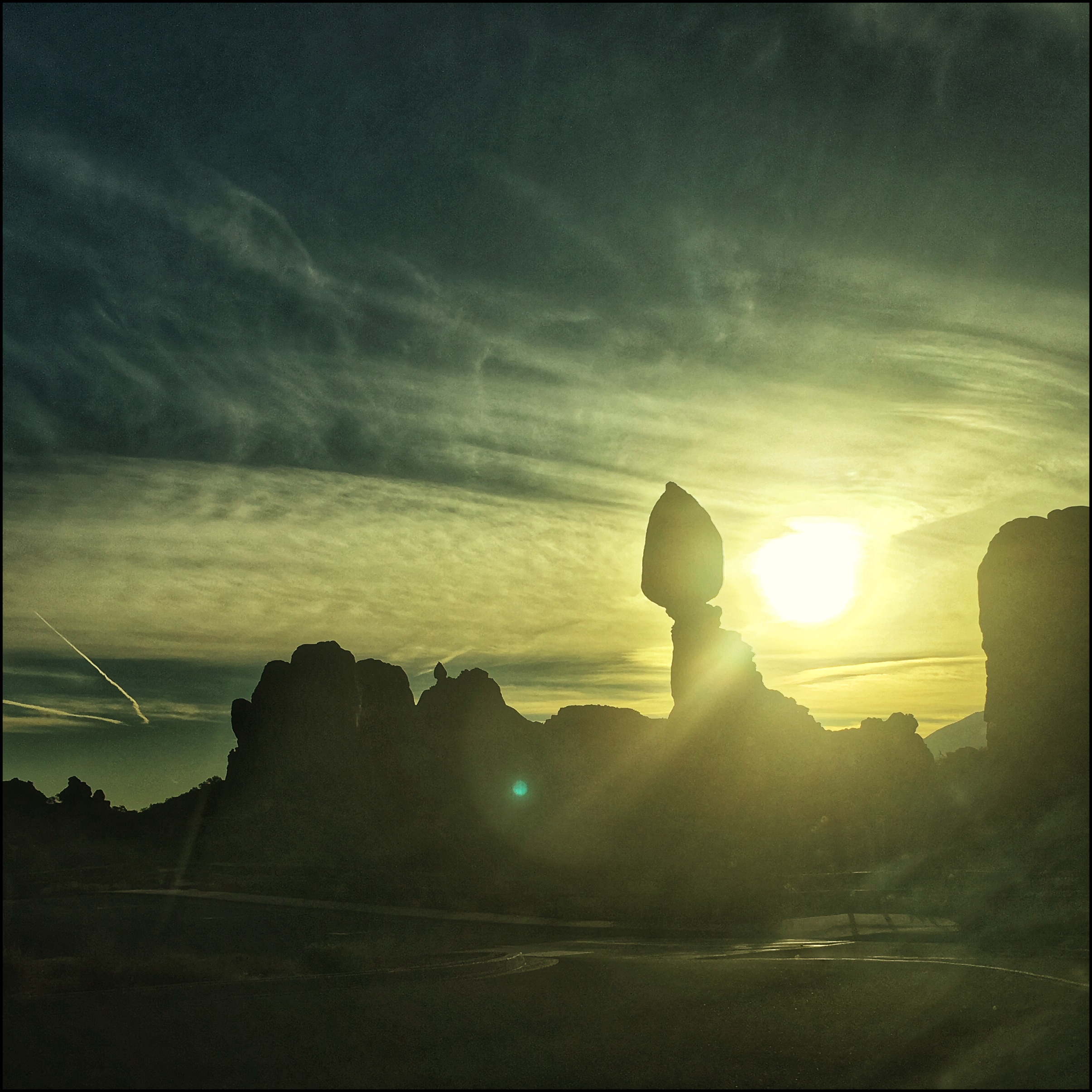 We headed further into the park to the Delicate Arch Viewpoint. To actually reach the base of the arch, we would have had to hike three miles on rock. My wife’s heel wasn’t up to that, but we did hike the steep trail to the overlook where we got these views. This is the most famous arch in the park, notable because it’s free-standing. 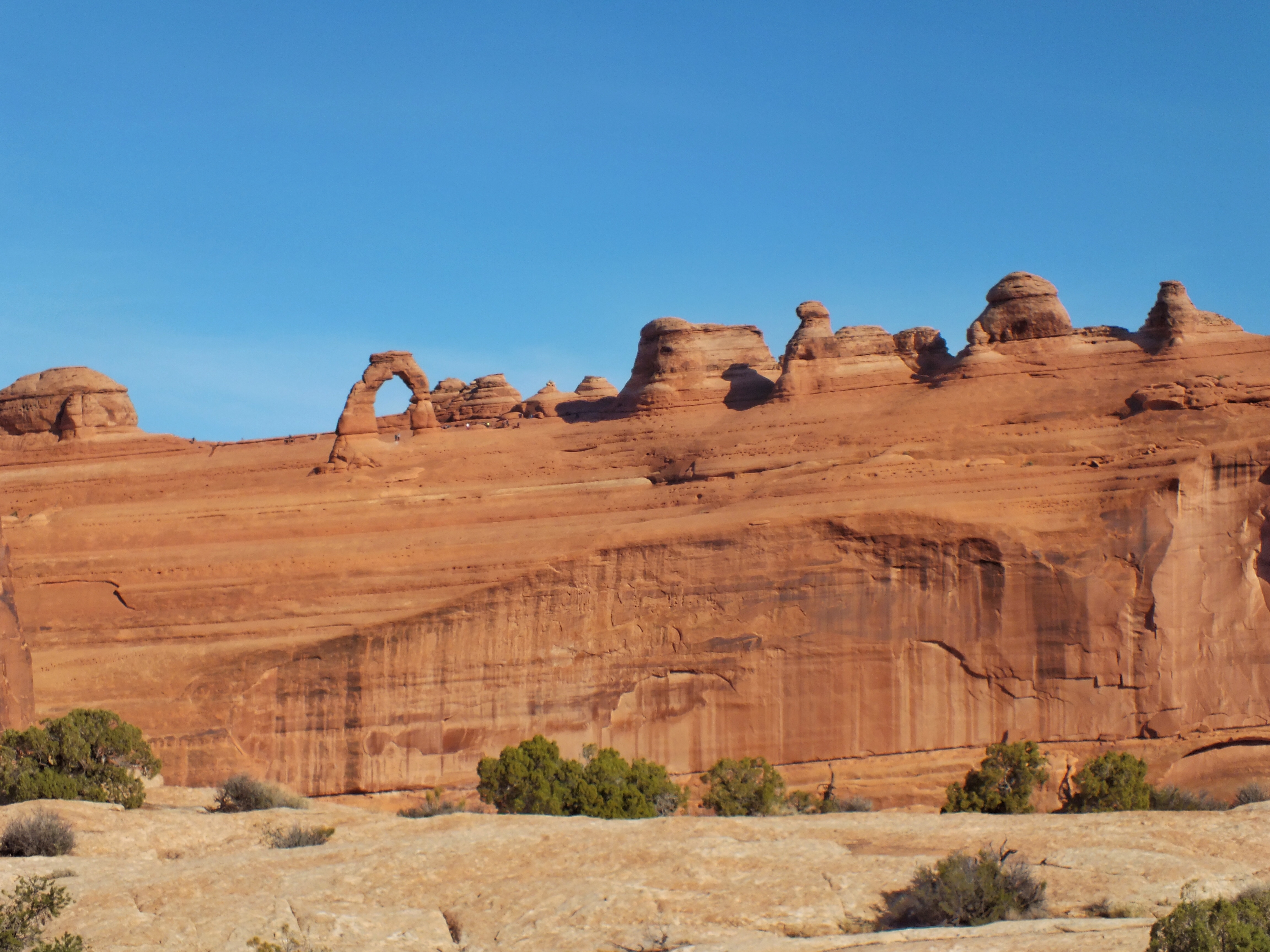 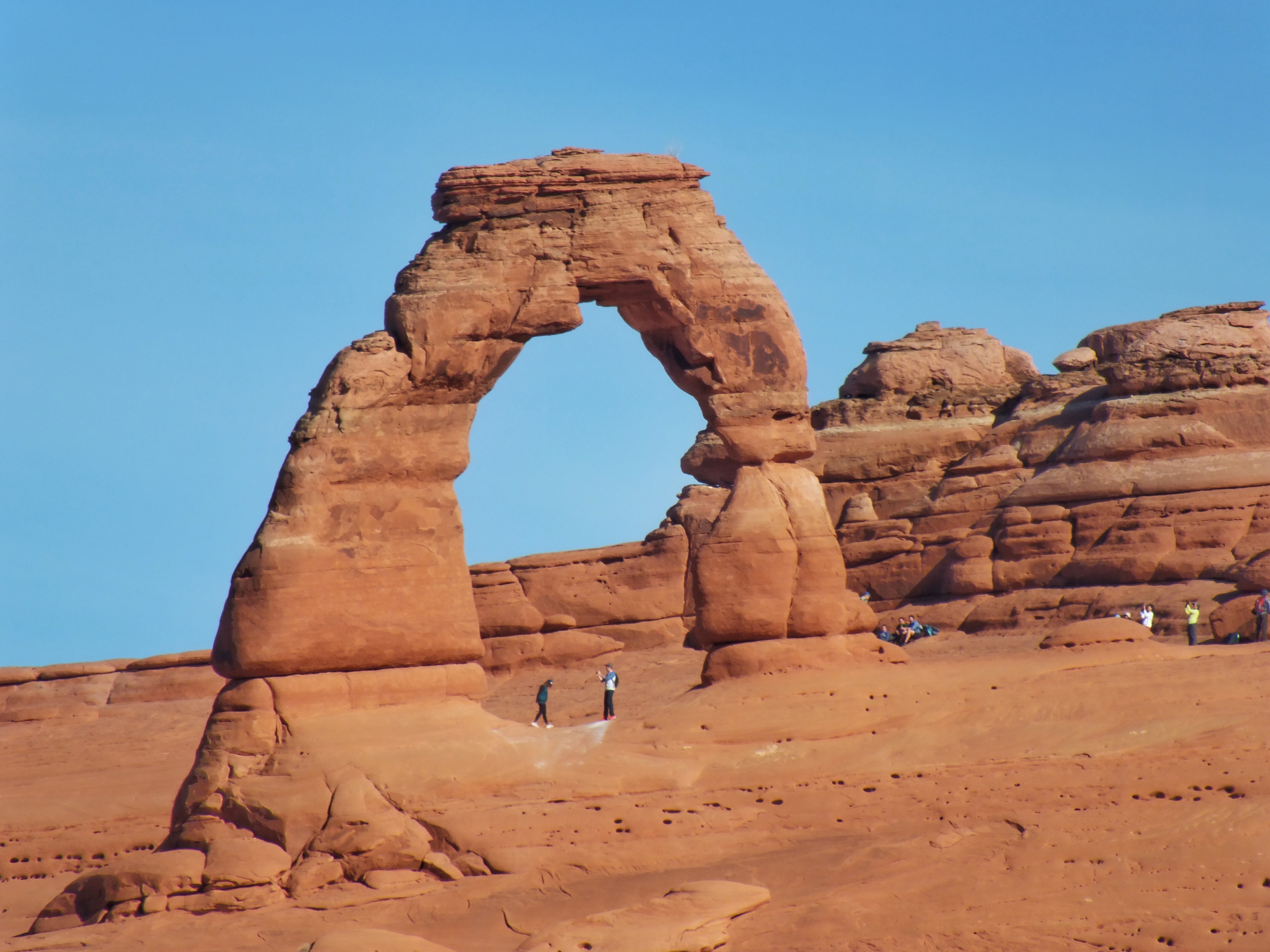 There were fall colors, even in the desert. 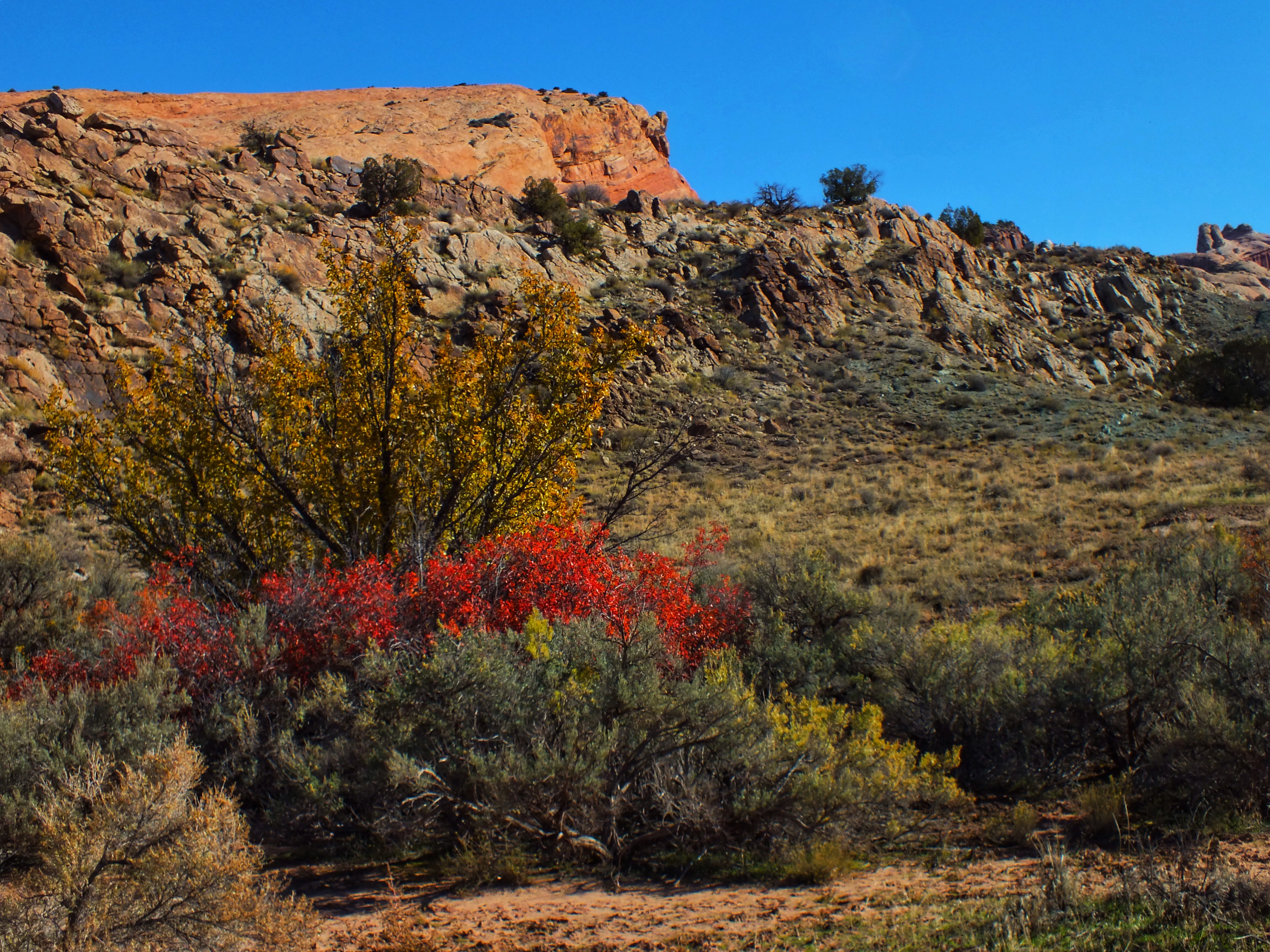 We drove to the end of the road by Devil’s Garden. This part of the park looked to me a lot like Garden of the Gods in Colorado Springs, only bigger. 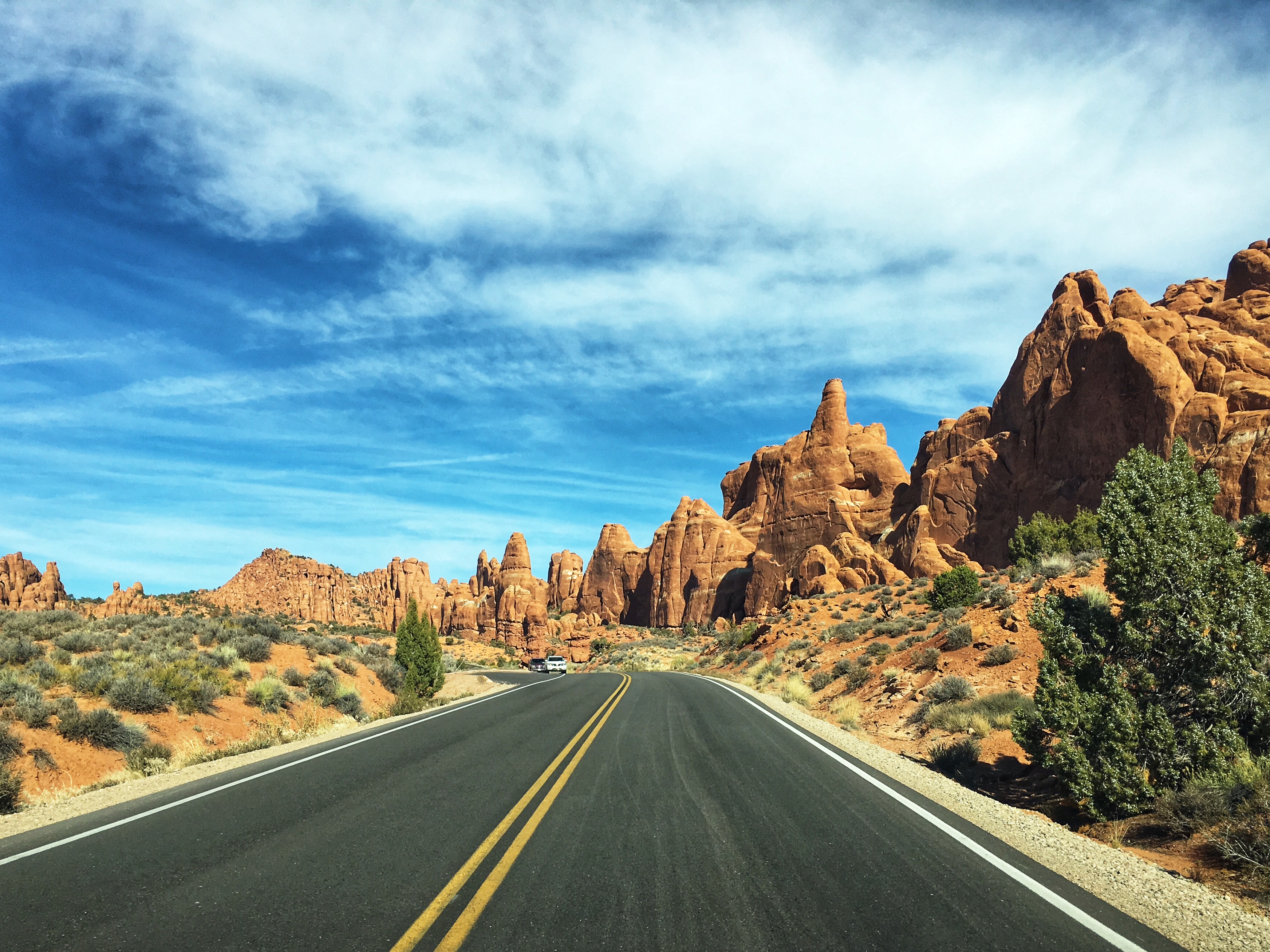 Landscape Arch. We didn’t bother getting out of the car. 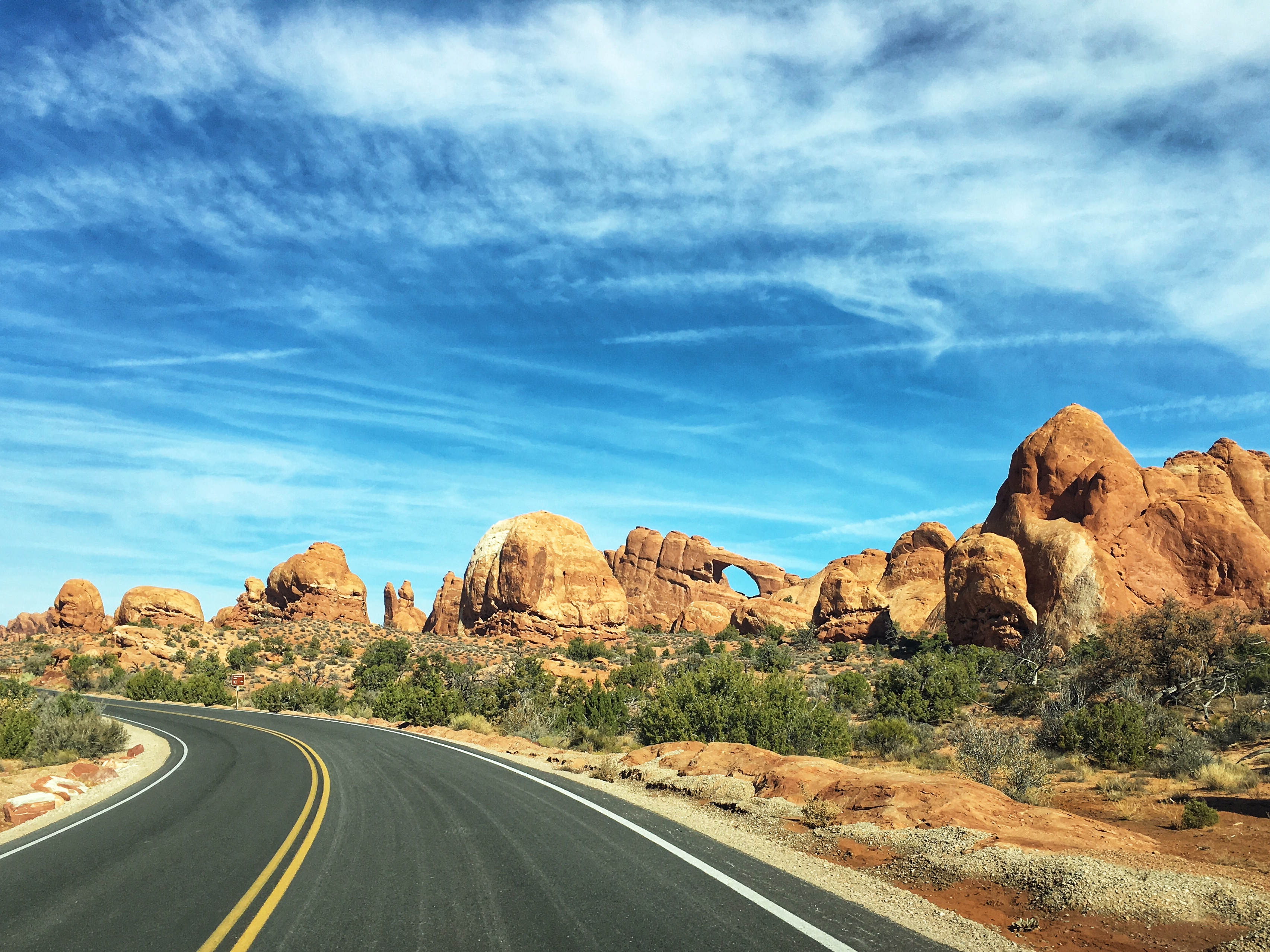 There was one more trail I wanted to hike, but my wife was done. She stayed in the car while I walked the Devil’s Garden Trail. It wasn’t particularly strenuous, but there were several hills and a lot of loose sand. I soon noticed that I was passing everyone, and that people a lot younger than I am, and who looked like they were in much better shape, were panting and stopping frequently. I was feeling pretty good about the shape I was in. And then I realized I was at 4,500 feet. I live at 6,700 feet. It was the abundance of oxygen that was giving me the energy. 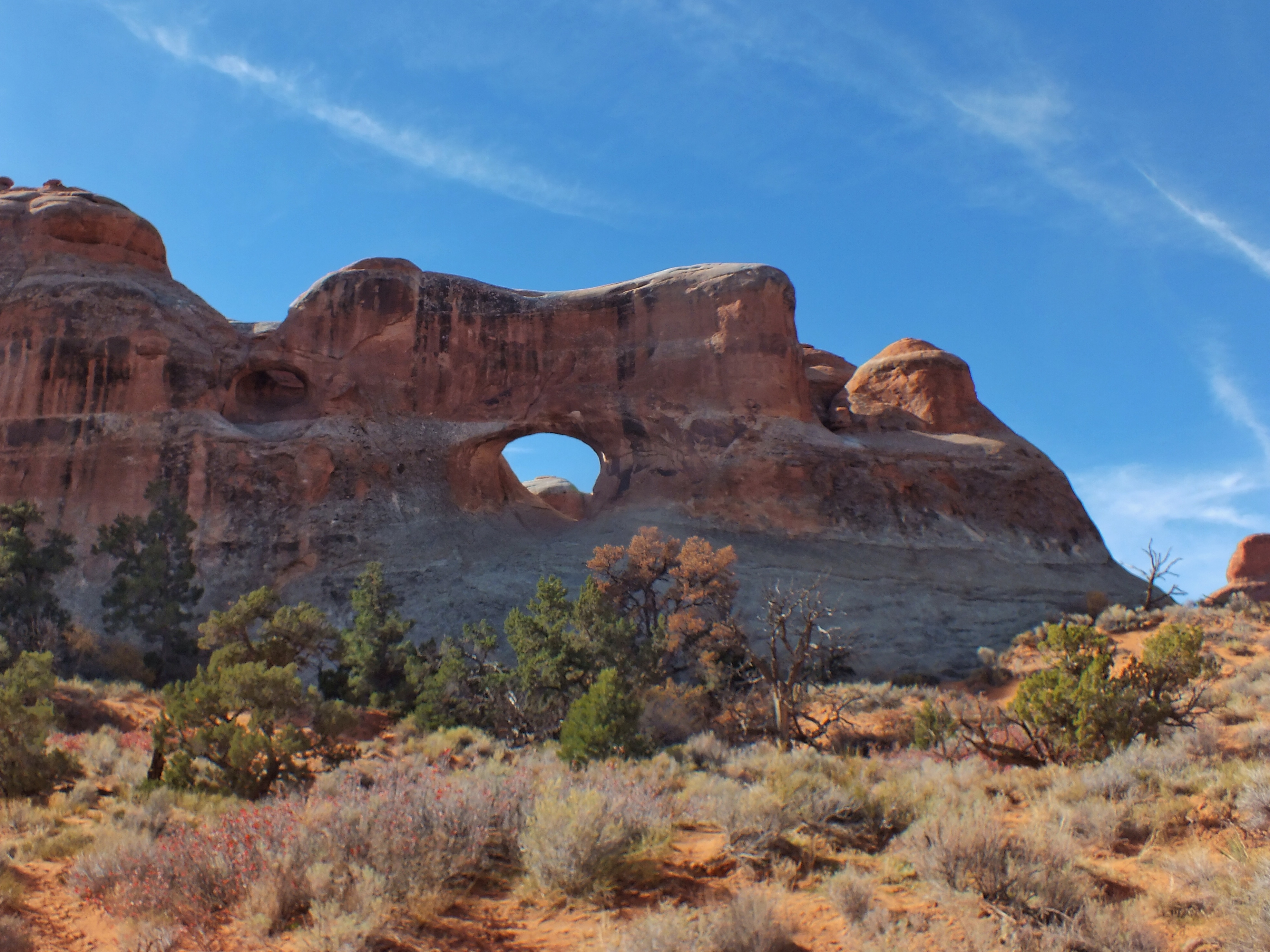 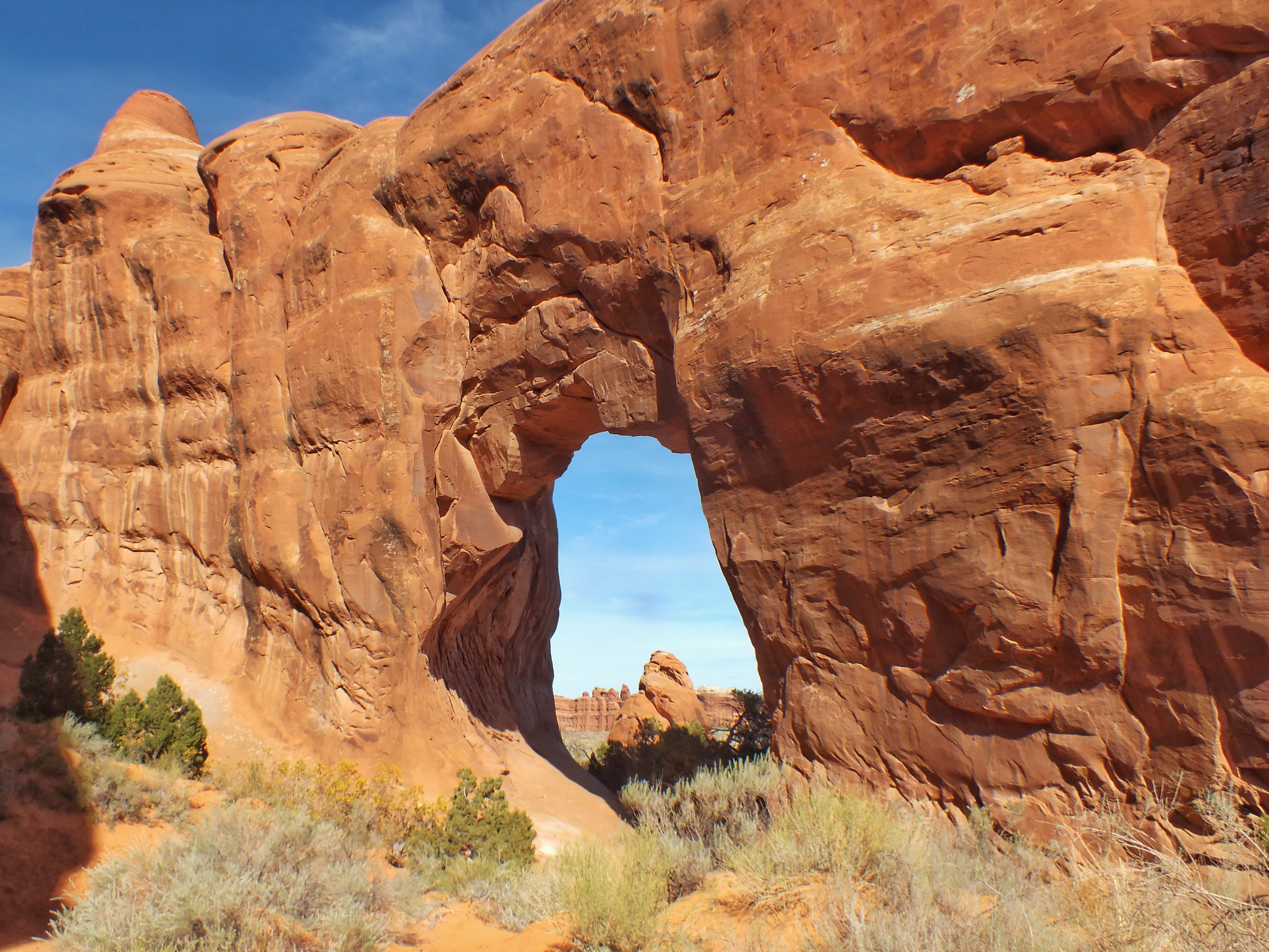 Landscape Arch—the one with the longest span. 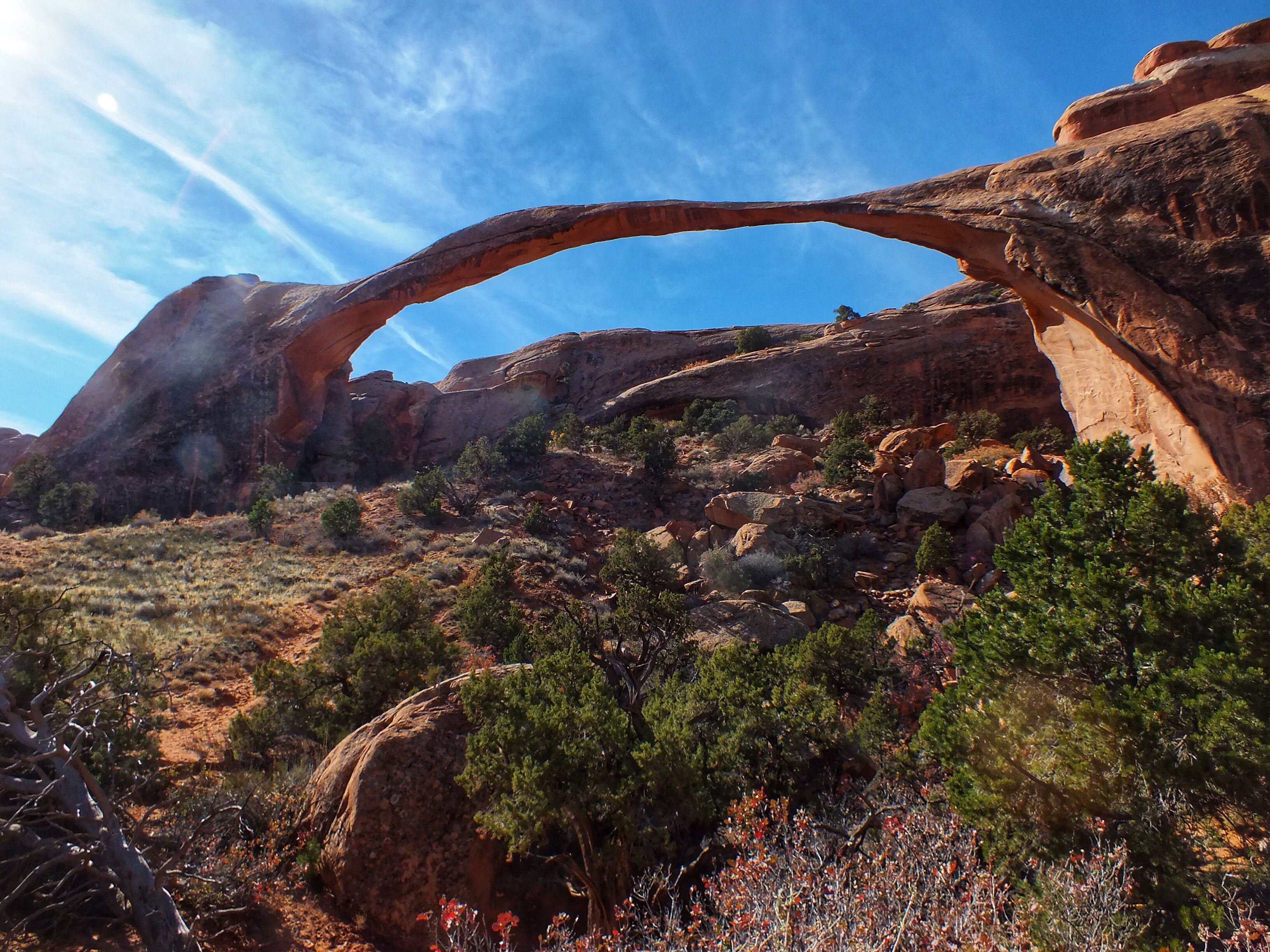 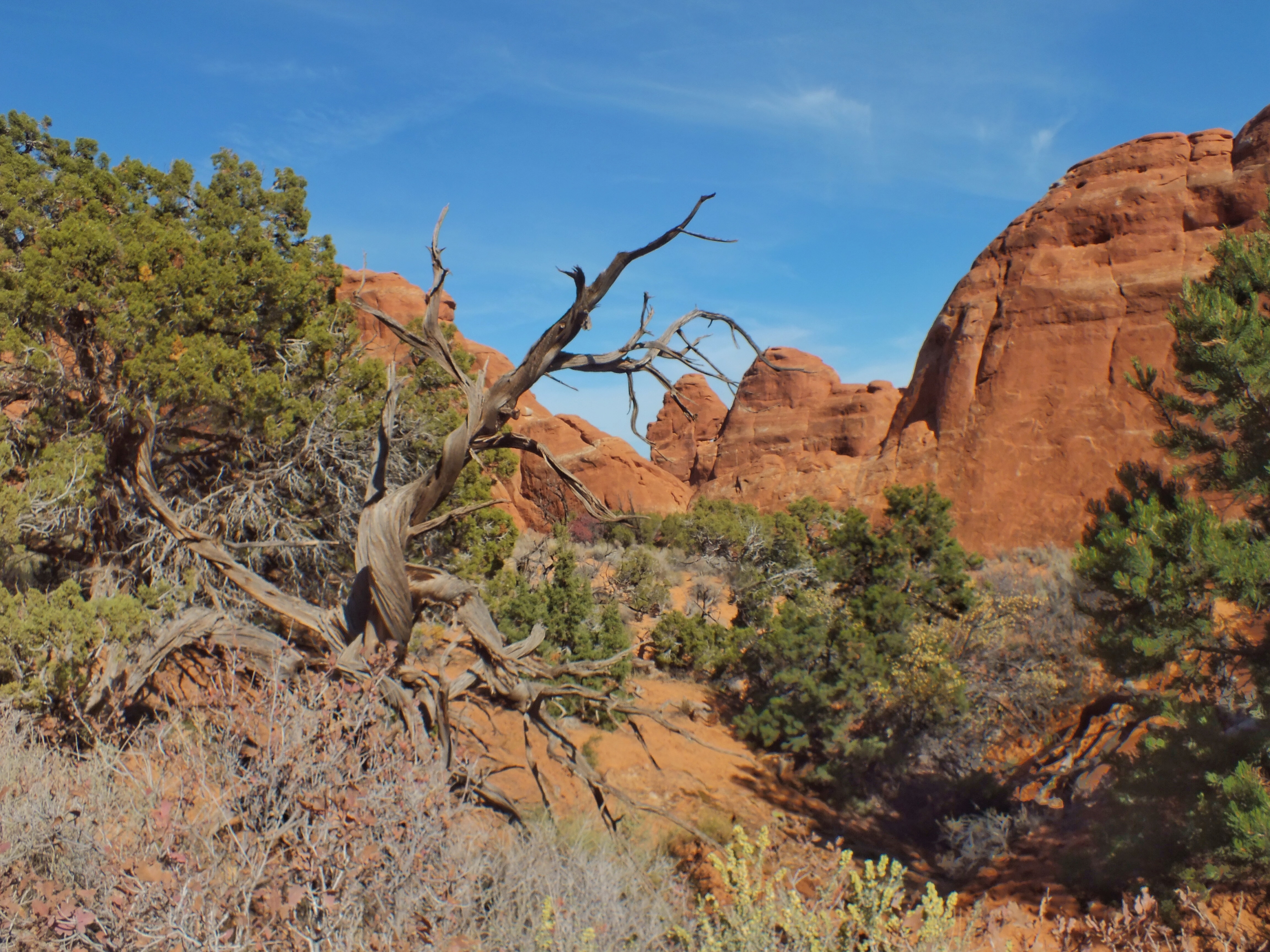 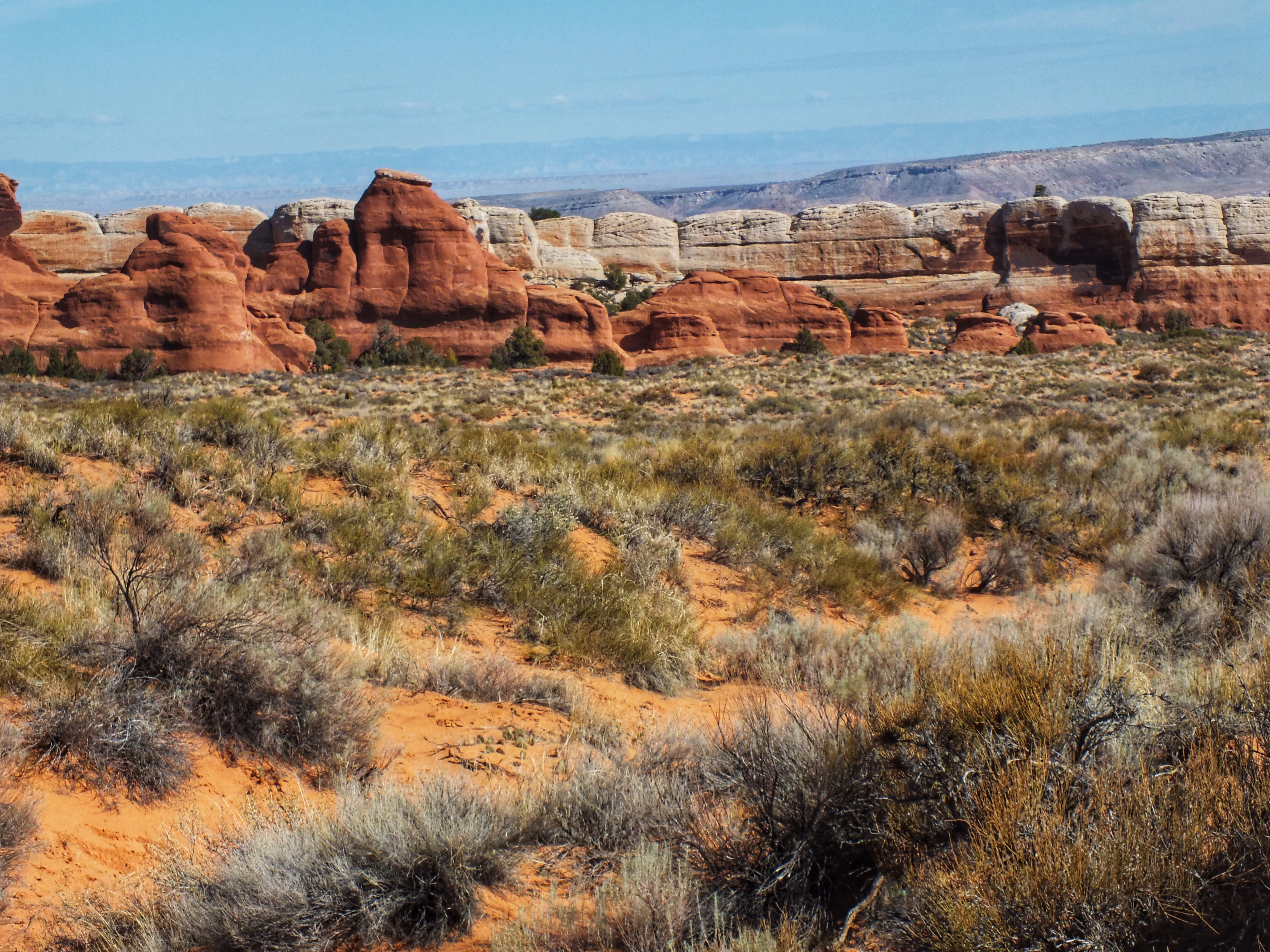 The La Sal mountains in the distance 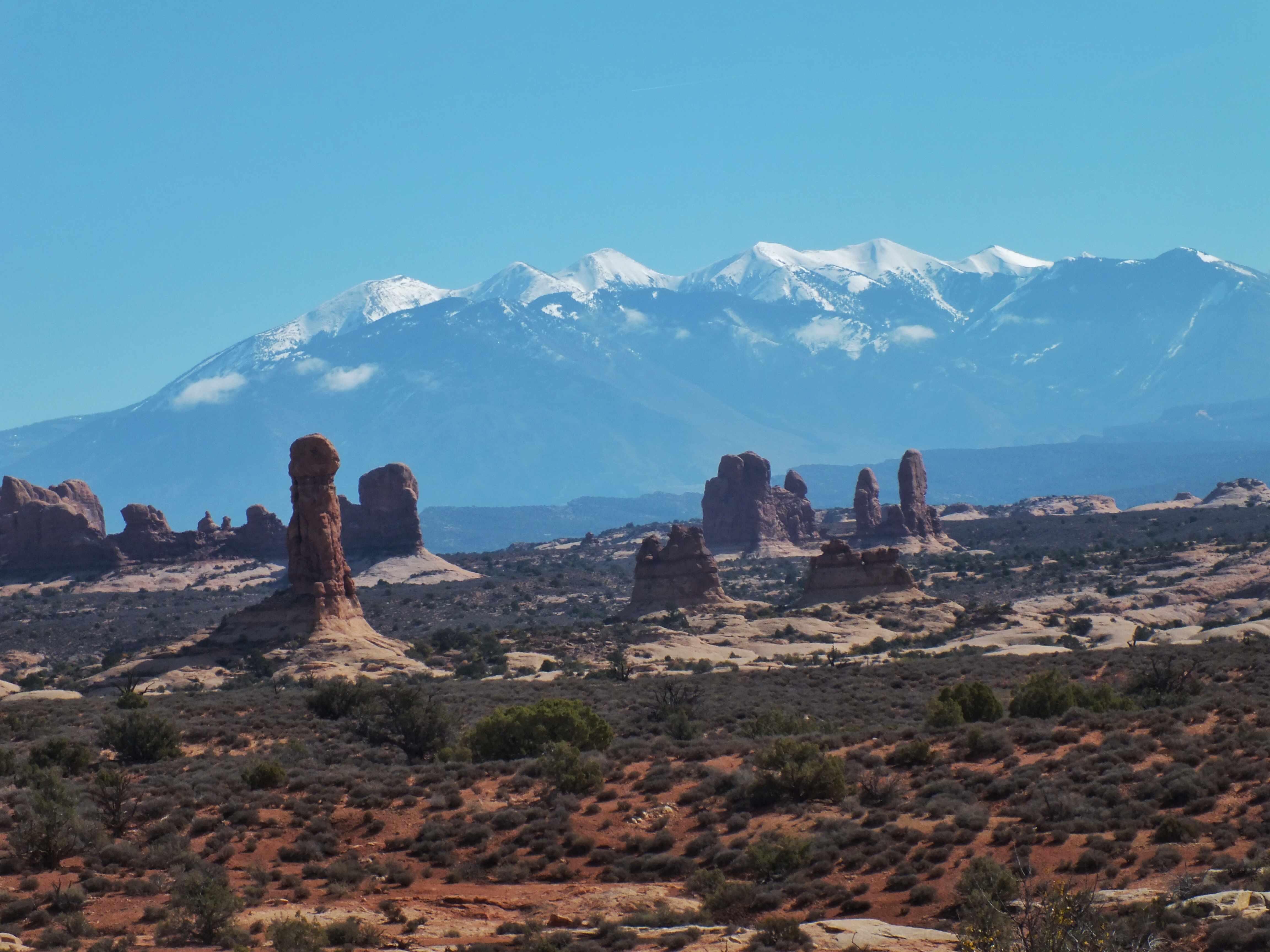 We were done with the park by early afternoon. But before I end this part of the post, I want to share one more thing. I think the writer of the Arches National Park newsletter used to write devotionals. What do you think? 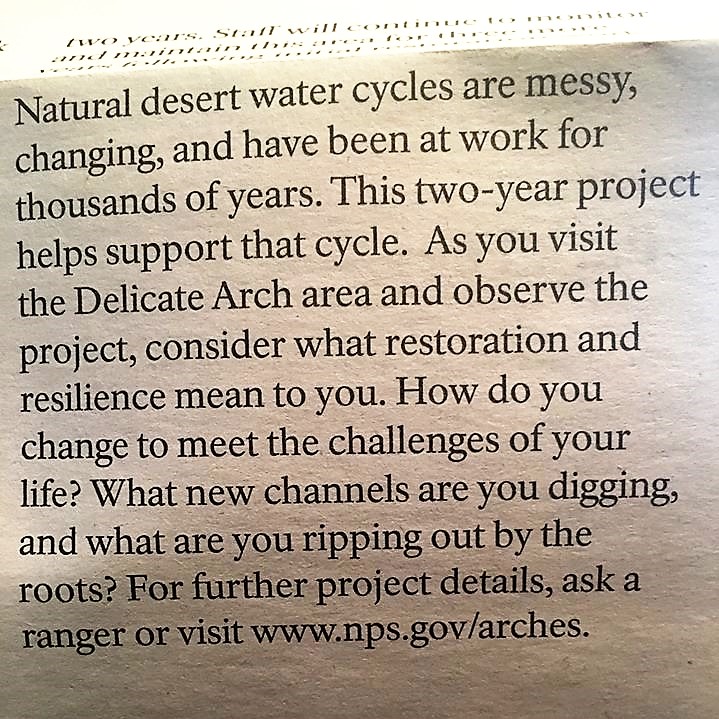 After dropping my wife at the hotel, I drove north for about 20 miles to see the Moab Museum of Film and Western Heritage at Red Cliffs Lodge. The museum turned out to be a room in a basement with stills from movies shot in the area—and very little other information. 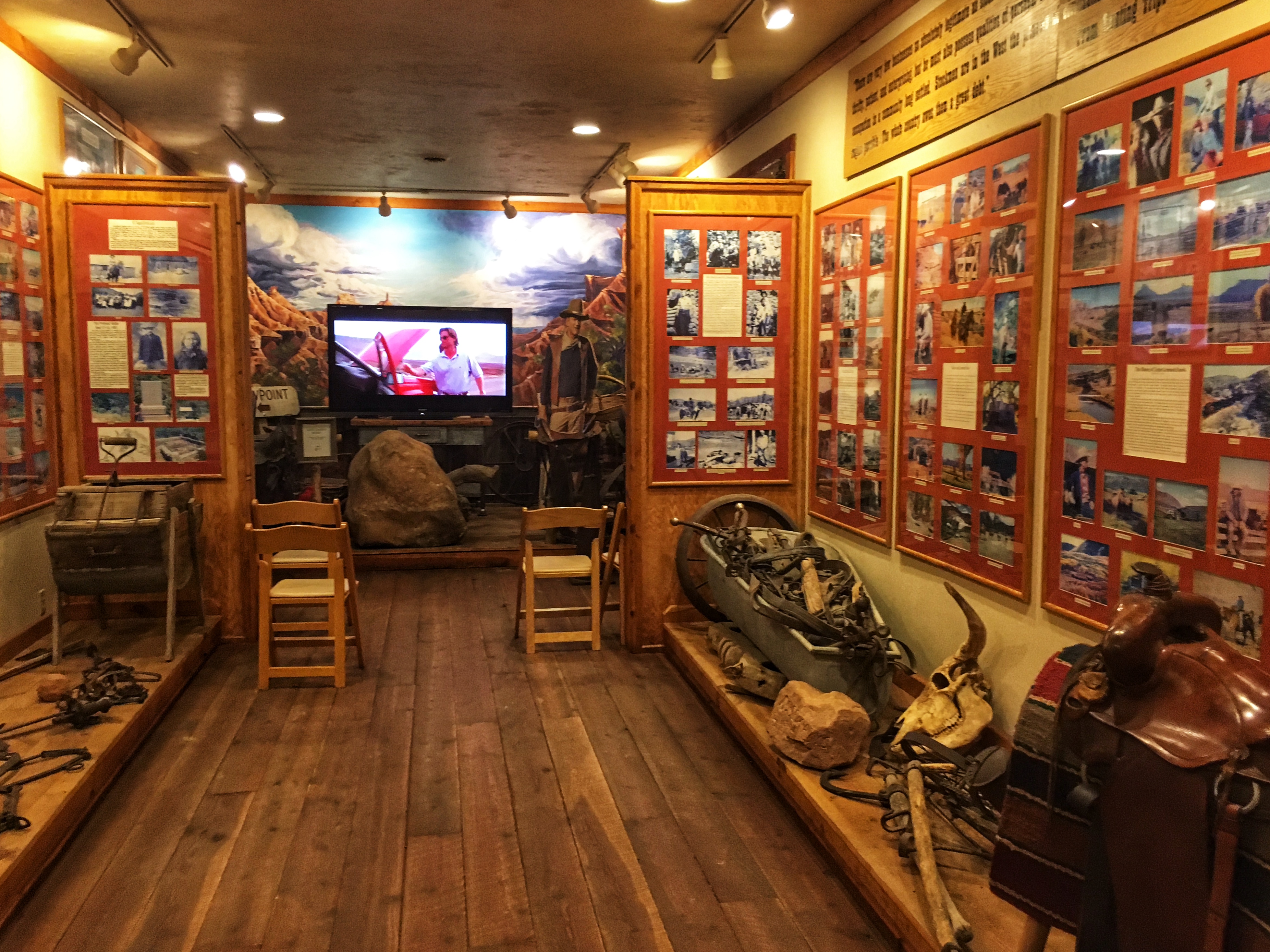 I spent maybe 10 minutes in the “museum,” and then wandered outside. The lodge sits along the Colorado River in a deep canyon, and the view were amazing. I decided that we’d have to travel back and spend a weekend there.

Although the museum wasn’t worth the price of admission (it was free), the drive there and back was well worth paying for (although I didn’t have to). The video below shows views from Arches National Park and from my drive that afternoon.

After stopping in Moab for donuts, we hung out in the hotel the rest of the day. 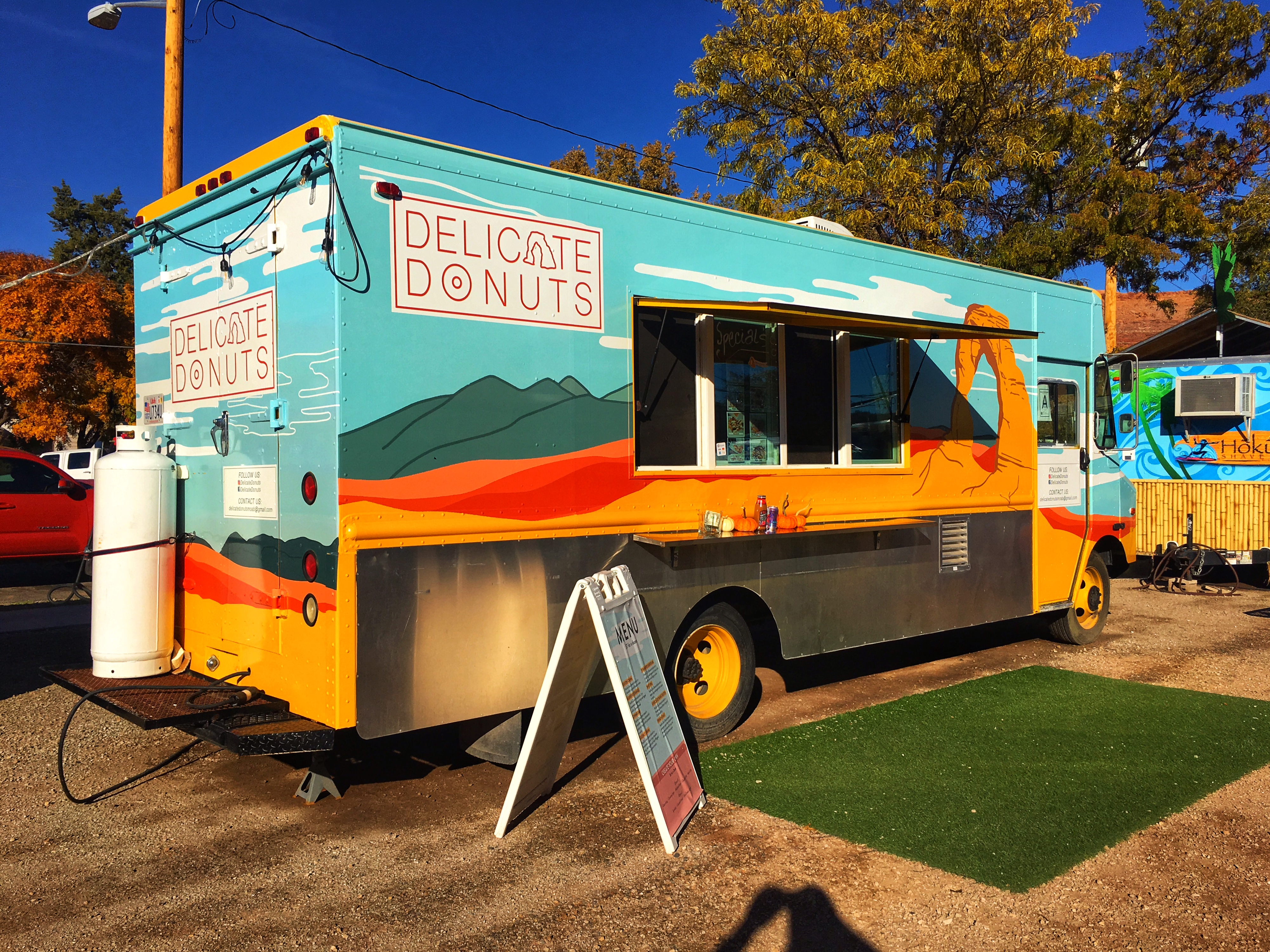