This tourist trap comes complete with a misplaced apostrophe. Hole N’ the Rock is about five miles south of Moab. It advertises itself with huge letters painted in white on a cliff. 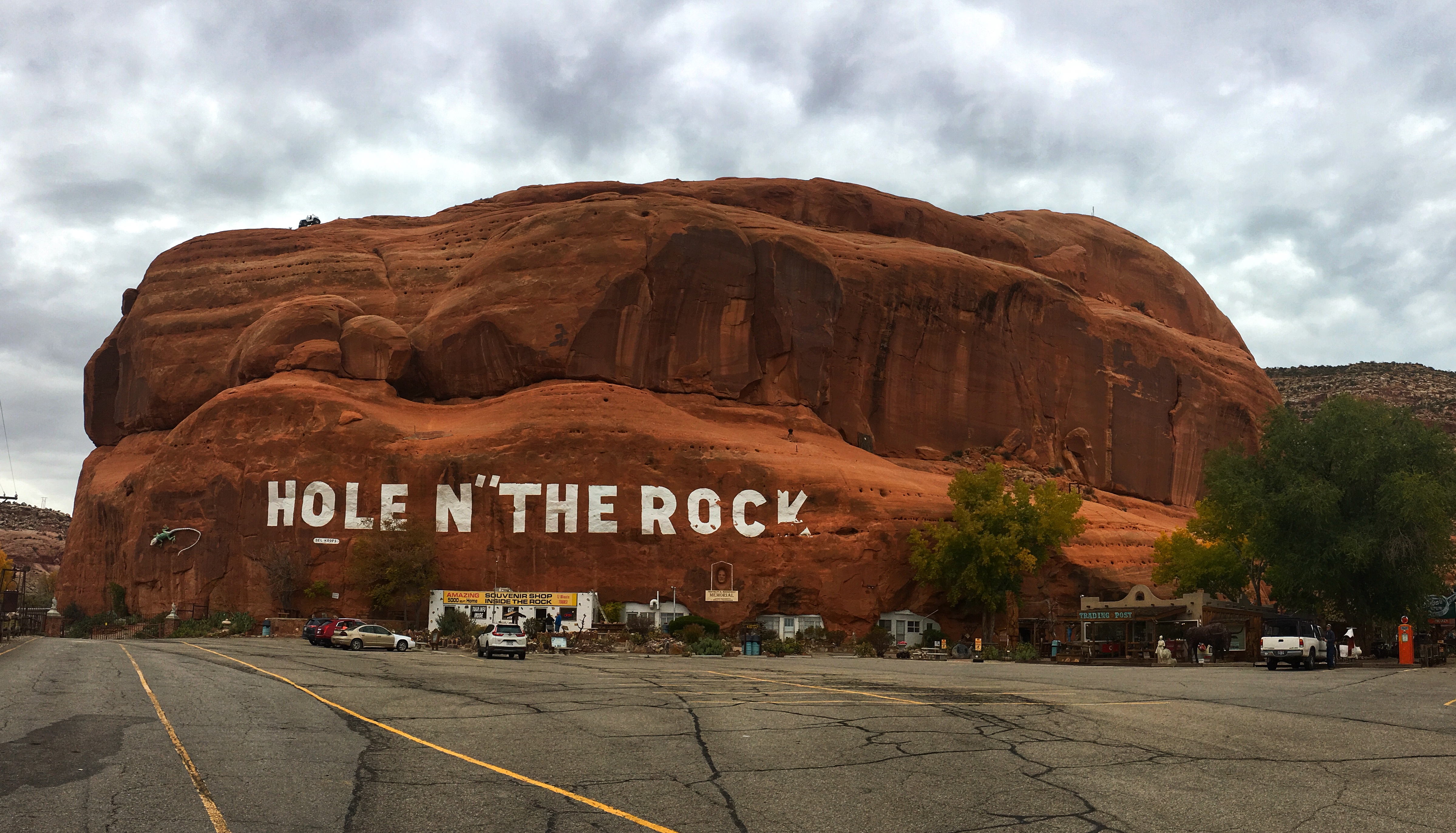 We were the only visitors when we arrived early in the afternoon. A few other suckers came in while we were there. We entered the white building beneath the letters and were greeted by an unusual woman. She was probably in her mid-50s, with her head half shaved and half hanging in front of her face. All of it was dyed electric blue and pink. She was also missing about half her teeth.

We paid for the 12-minute tour, and that’s what we got. The woman rushed us through the attraction like she had somewhere to be other than an empty gift shop.

But what is the attraction, you ask? It’s a house carved out of the rock by a guy named Albert Christensen and his wife Gladys. They started out living in front of the rock in the 1920’s. Albert carved out a room for his four sons, and then kept digging. Two rooms were used as a diner in the 40’s and 50’s. Albert died in 1957. Glady’s continued living in the cave until her death in 1974. She began giving tours in her latter years.

We weren’t allowed to take pictures. When attractions have this rule, it’s generally so they can sell postcards. But I found no postcards of the house. But photos are easy to find online. 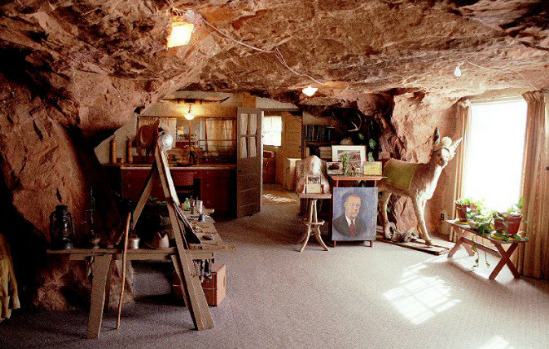 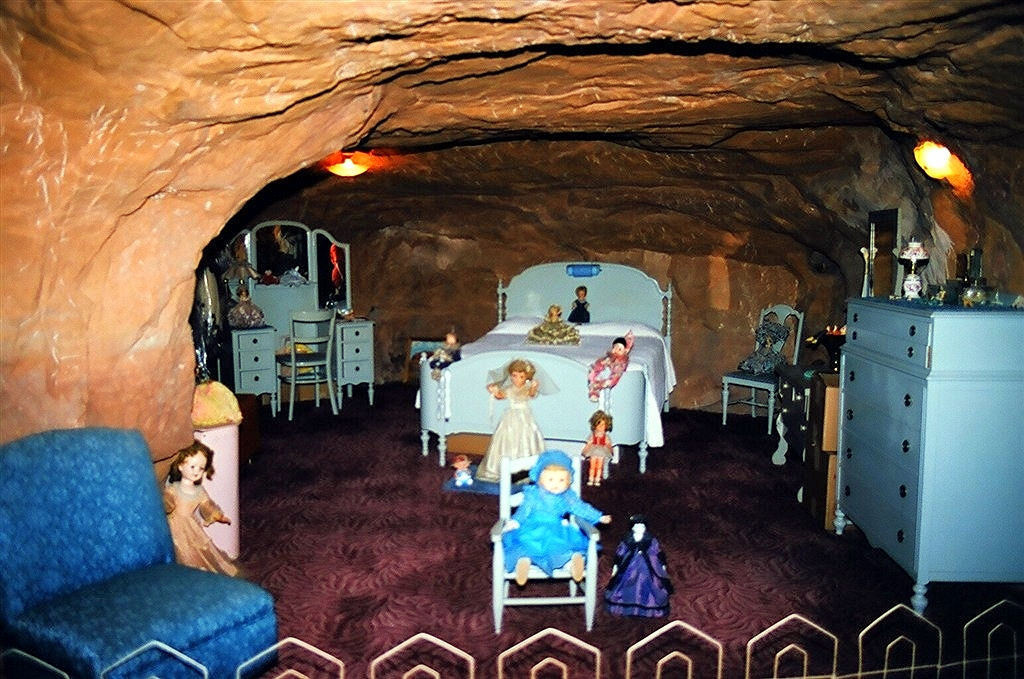 There are supposedly 14 rooms, but really there are only three or four with different “areas’ serving as rooms. Three front doors and several windows let in quite a bit of light, and except for the rather musty smell and the tacky decorations, it didn’t seem like a terrible place to live. 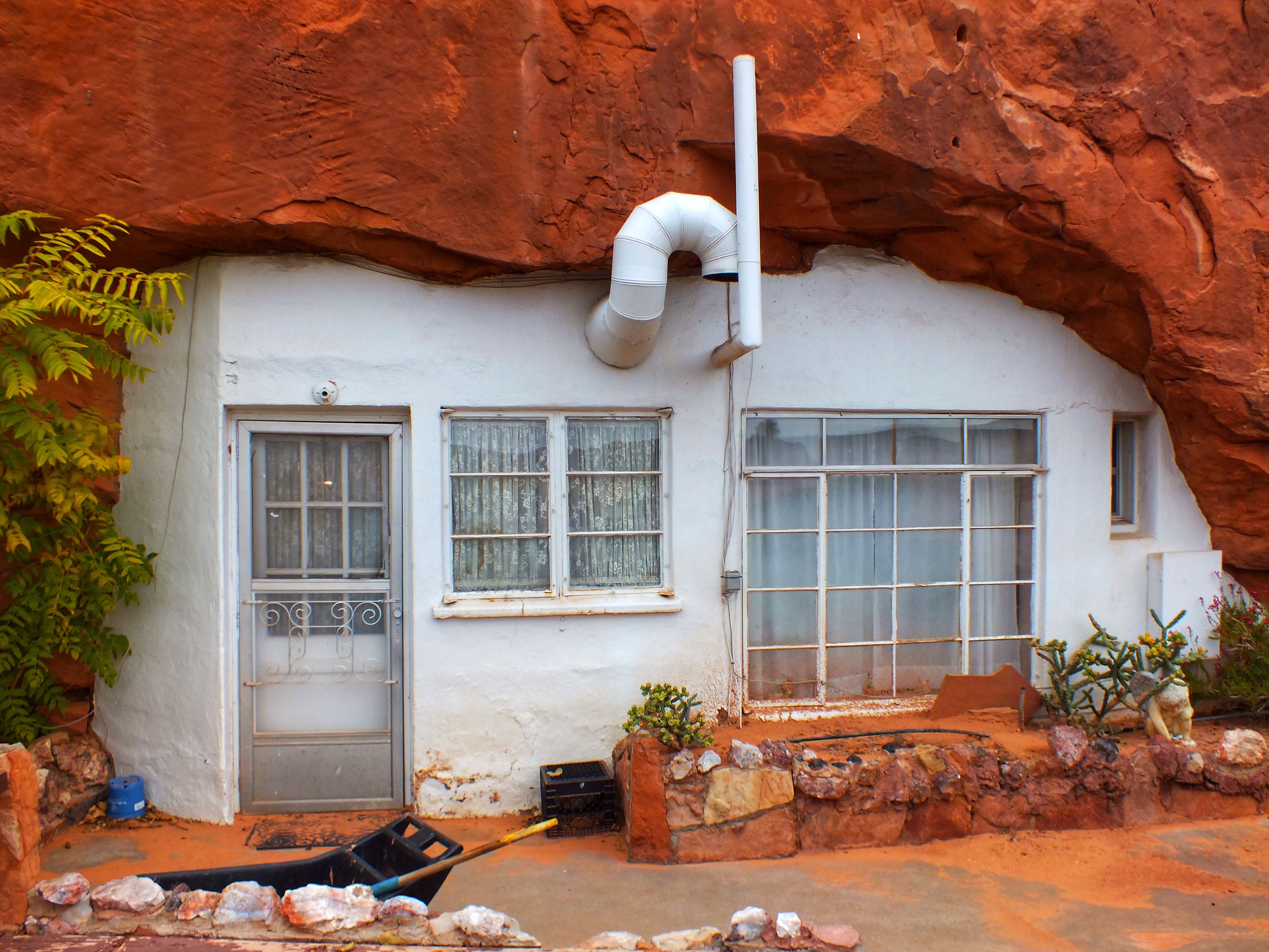 We were in and out in 12 minutes. We spent about that much time looking at the grounds which were … weird. Here are just a few of the things we saw. 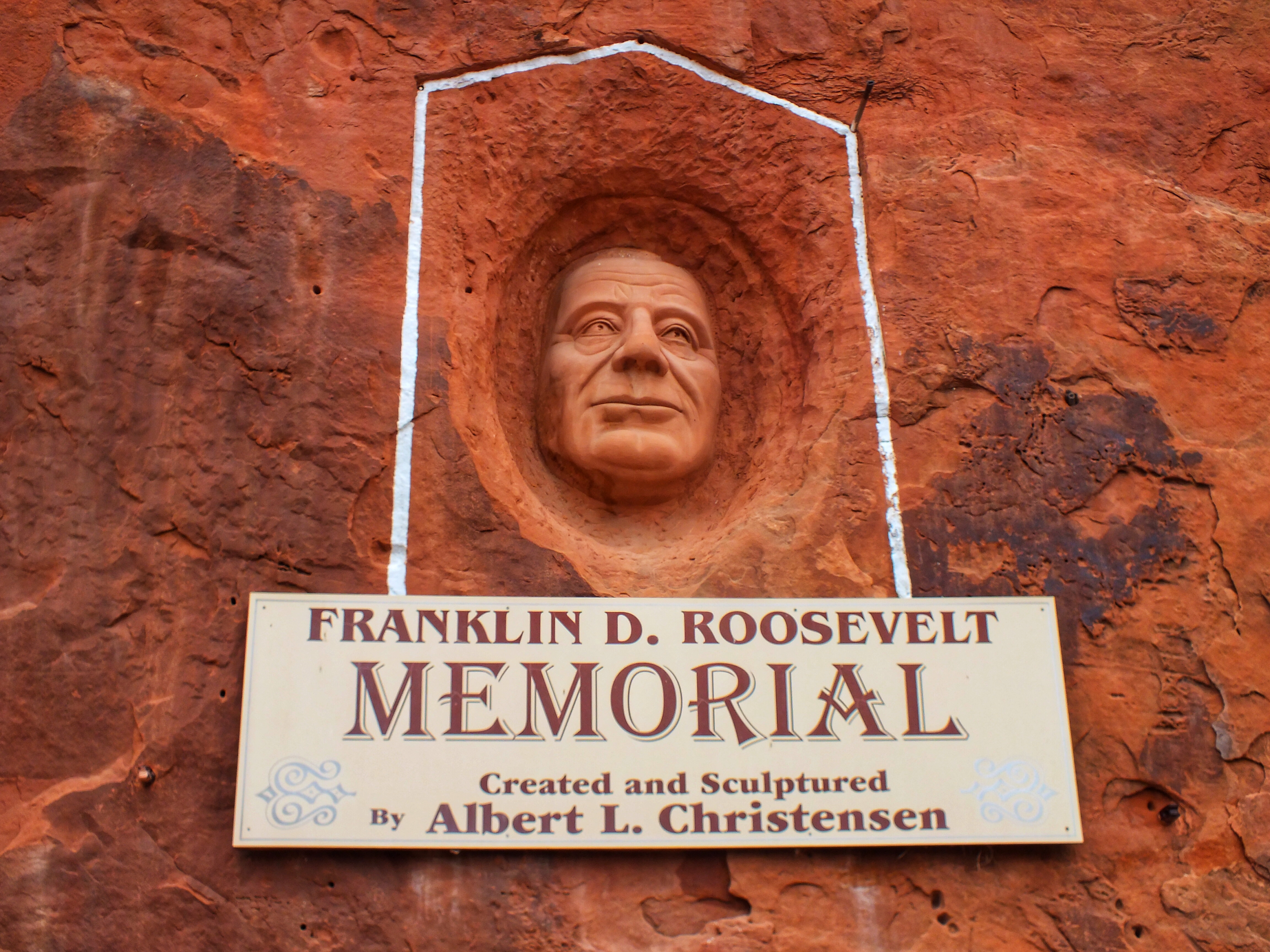 The graves of Albert and Gladys. 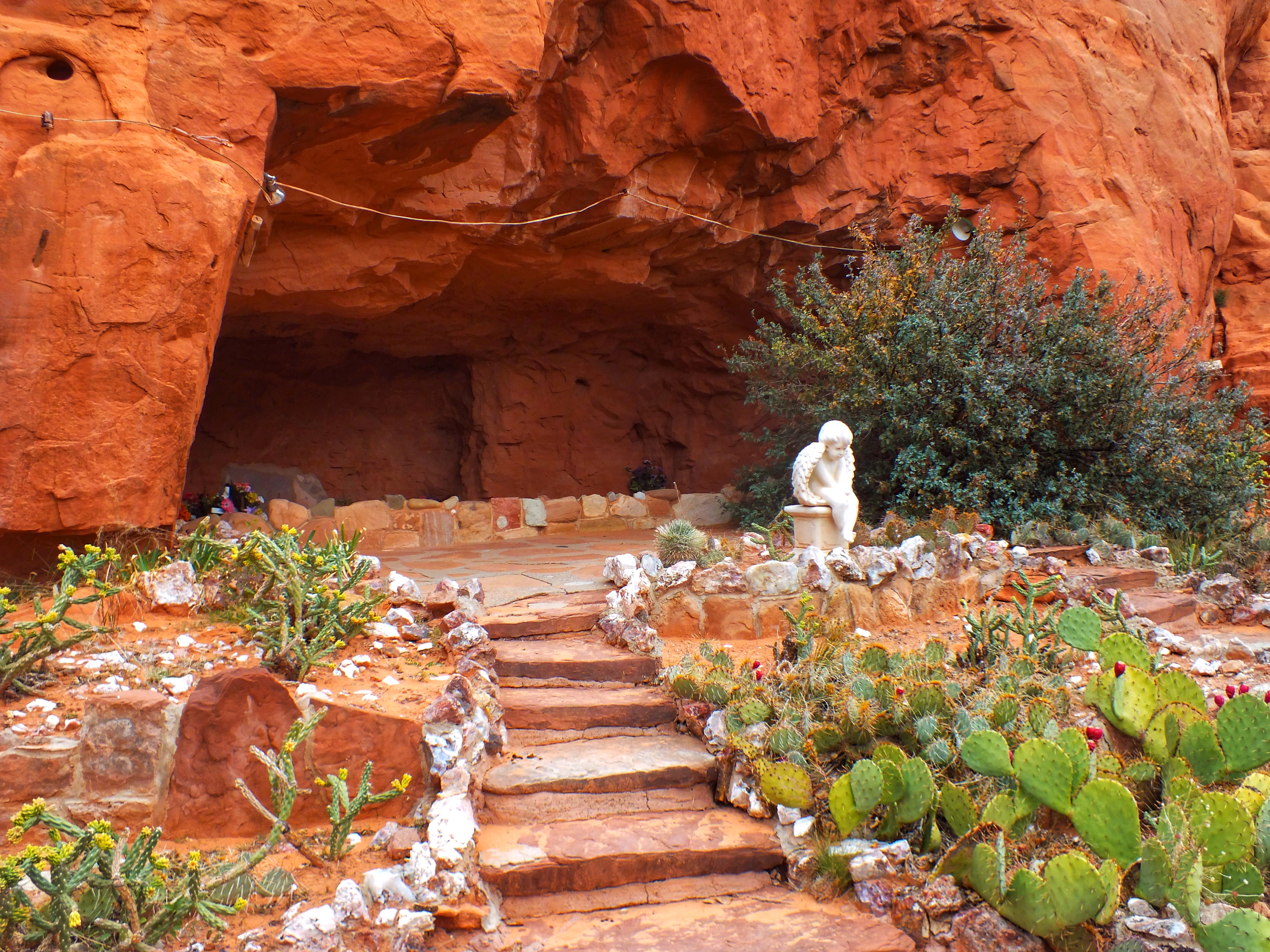 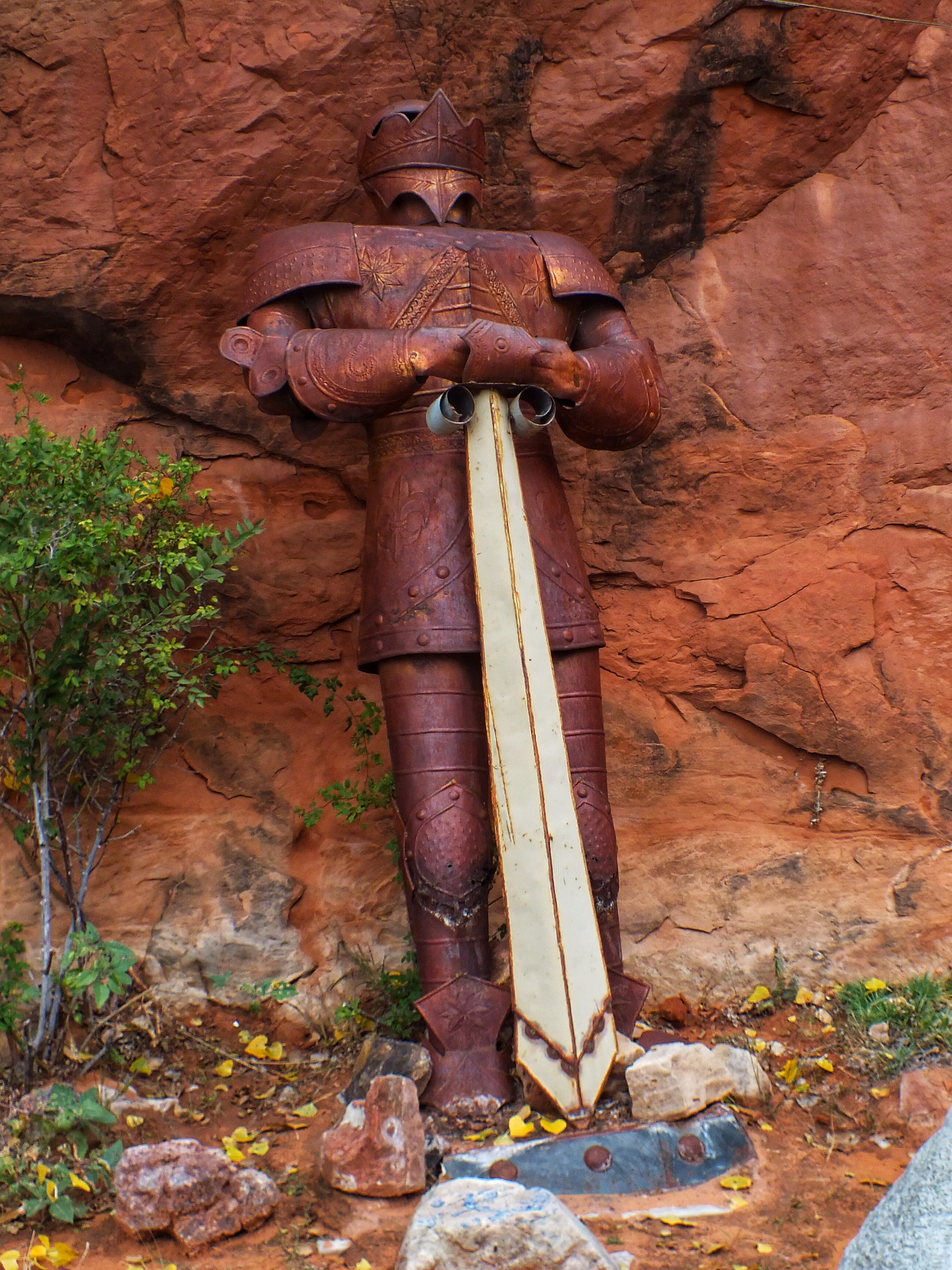 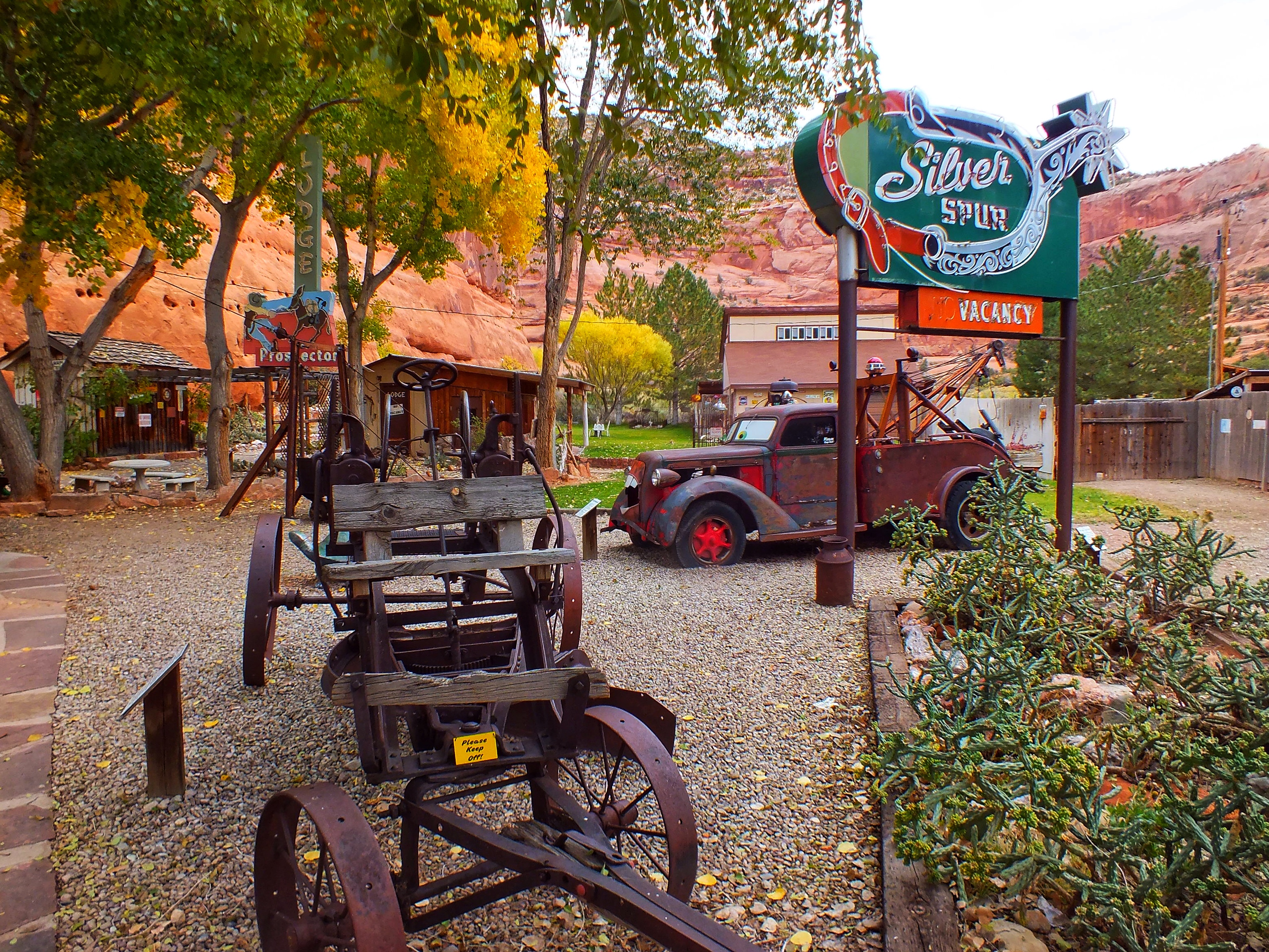 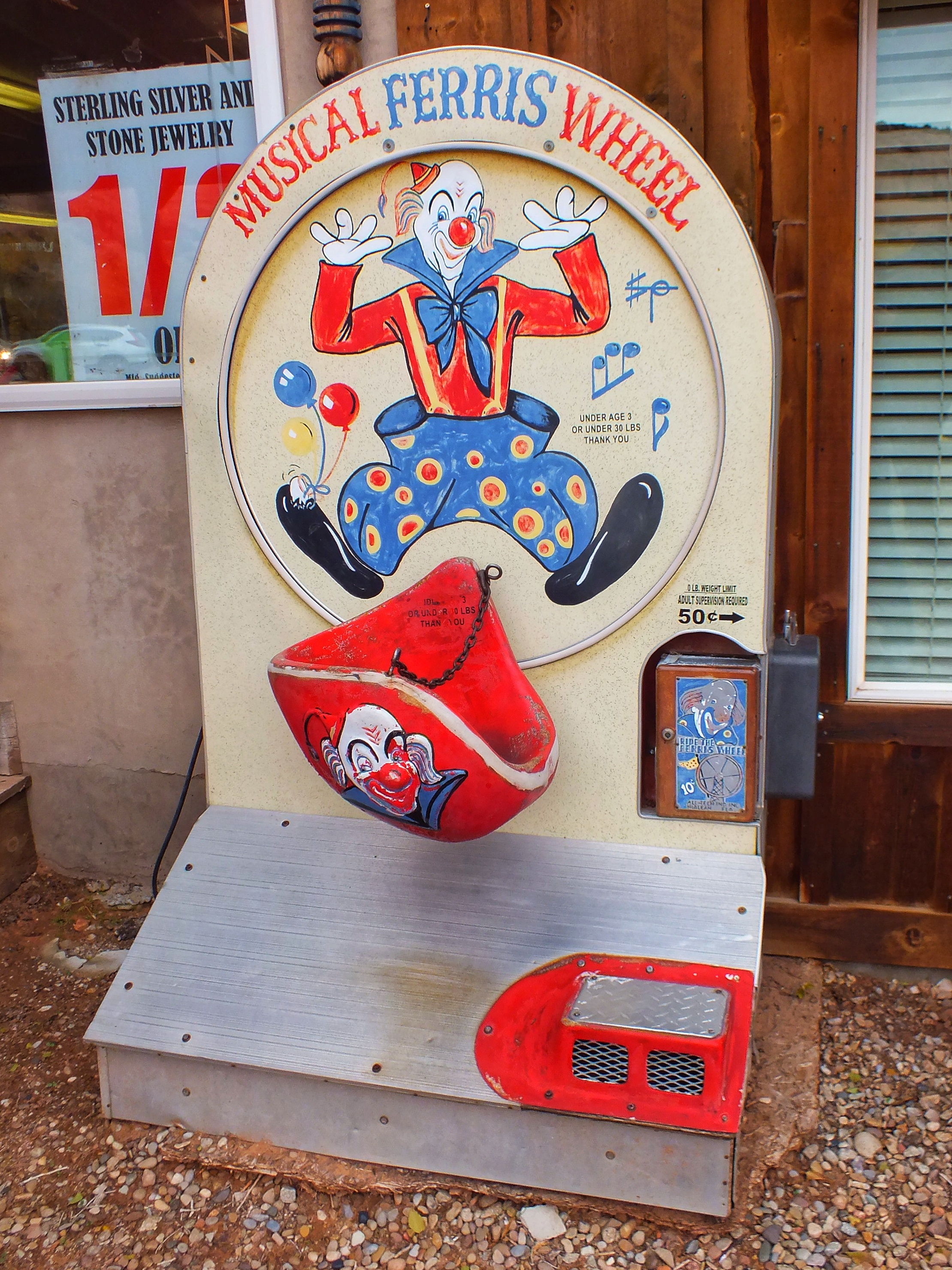 The cactus is made of bowling balls. 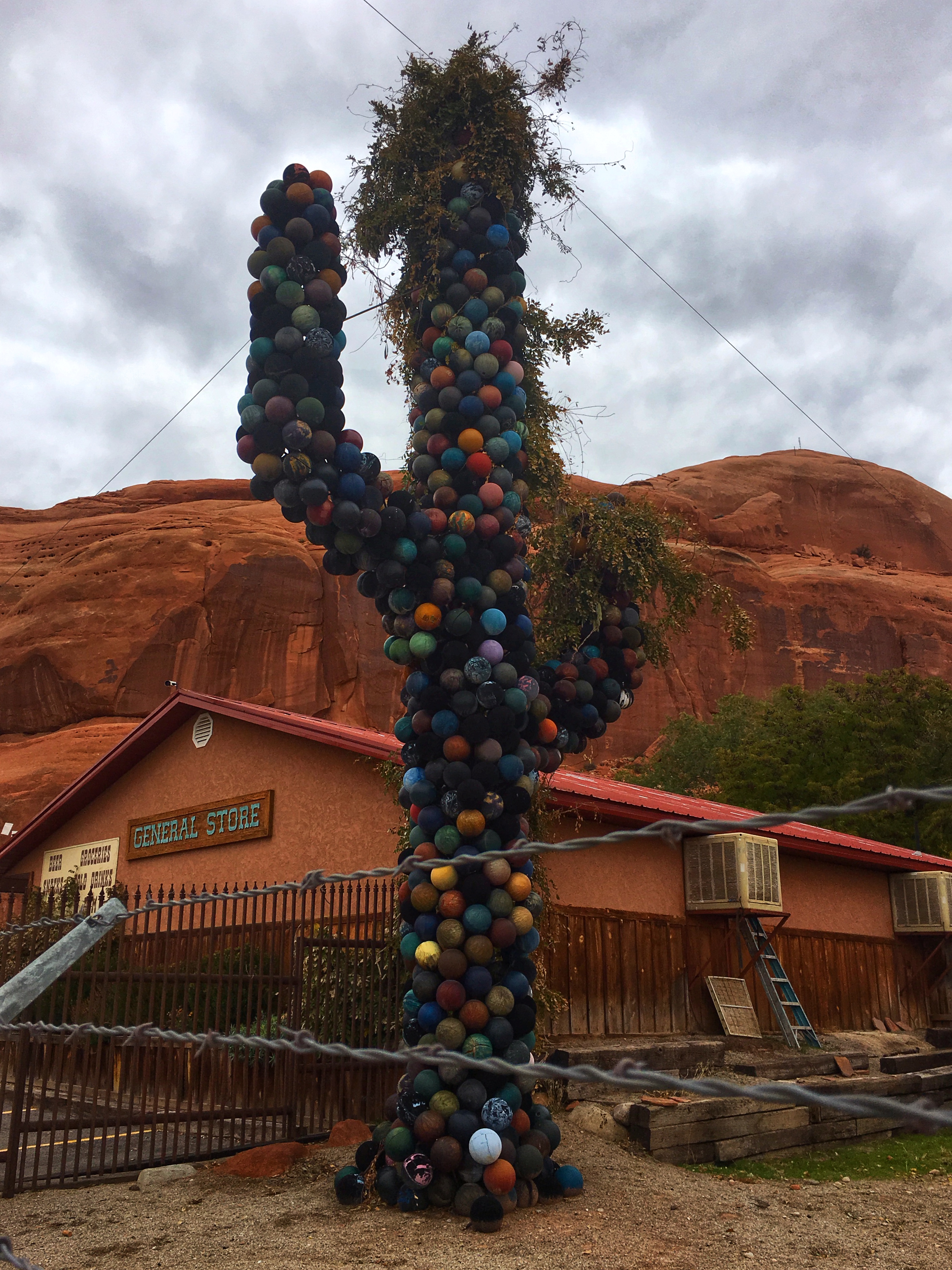 We were back in Moab with nothing further to do by 2:00 in the afternoon. We wandered through some of the downtown stores, all of which sold exactly the same souvenirs—except for a used bookstore that had some charm.

I went forth in search of birds. I parked along the Colorado River and walked a dirt trail along the cliffs. The view was pleasant, but there weren’t many birds around. 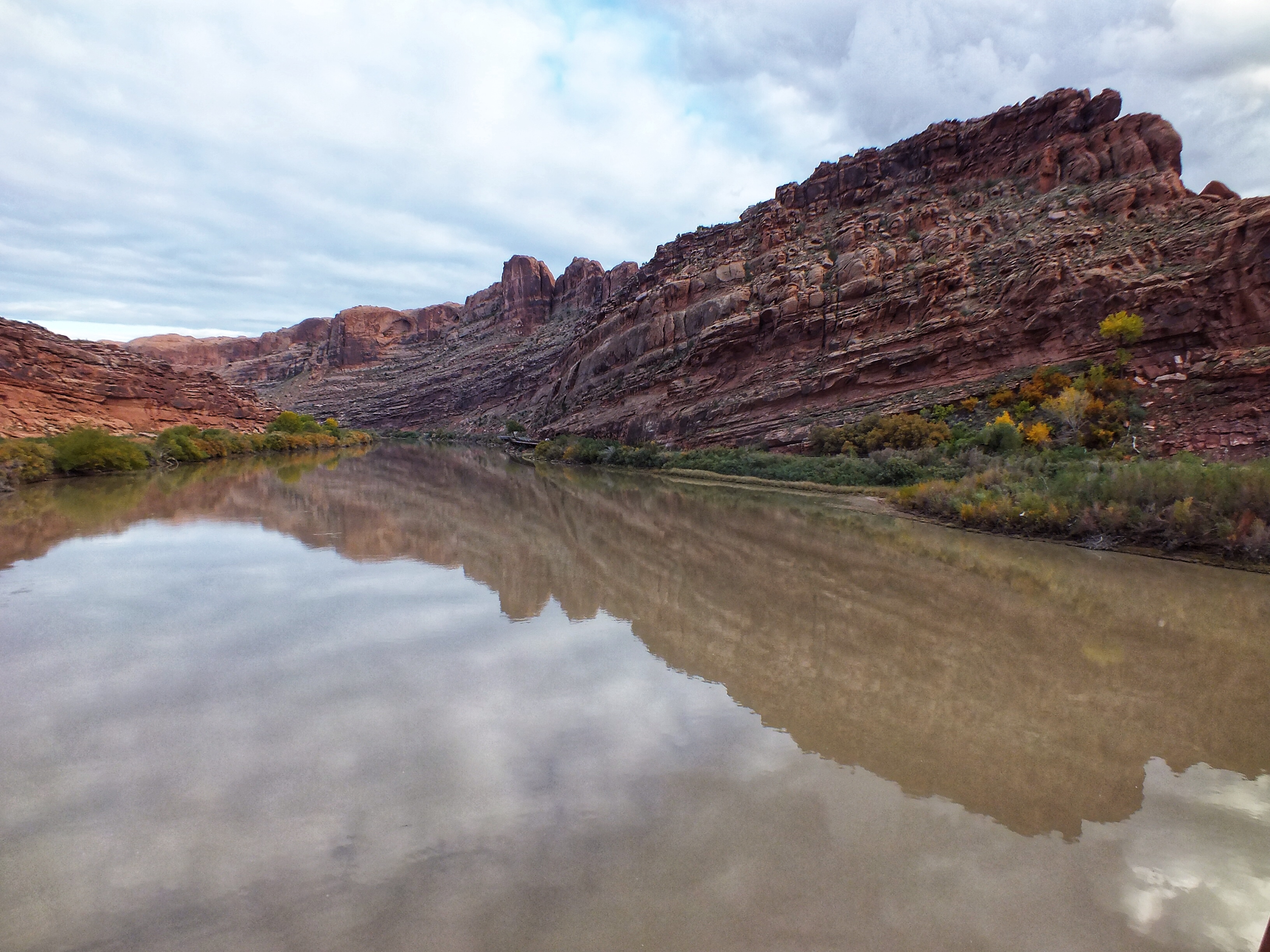 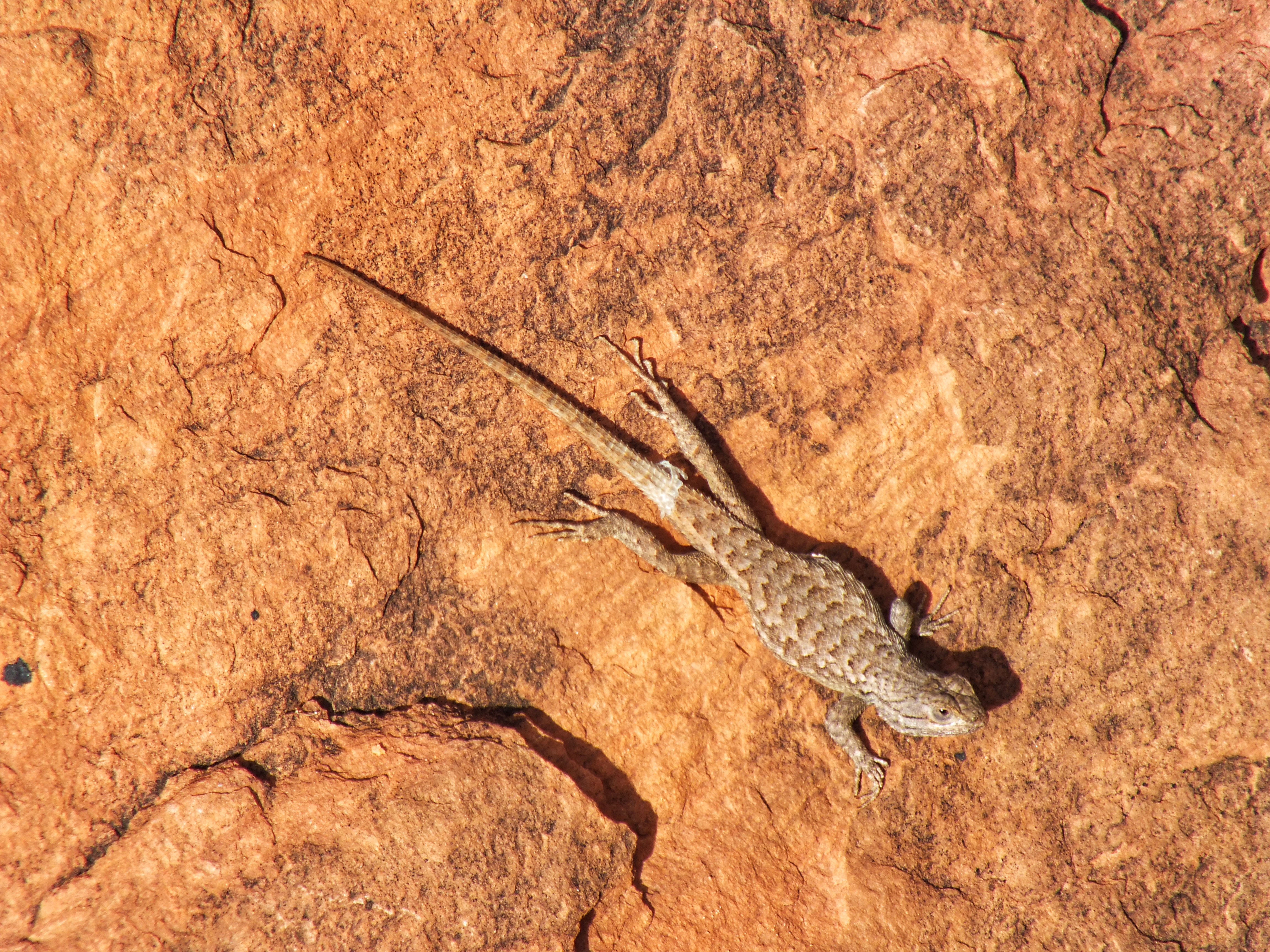 We ate dinner at a place called Pasta Jays. Our meals were rather bland until my wife had the clever idea to put salt on them. Magically, they became enjoyable. We took half home and cooked it in our room microwave the next night.