The Argo Mill operated from 1913-1943, milling gold brought in from mines in the region. The tunnel was bored straight back into the hillside for four+ miles and connected along the way with several of the mines. The ore was assessed and purchased by Argo before it was milled. The mill building is largely intact, although much of the heavy equipment was removed during WWII and used for the war effort. 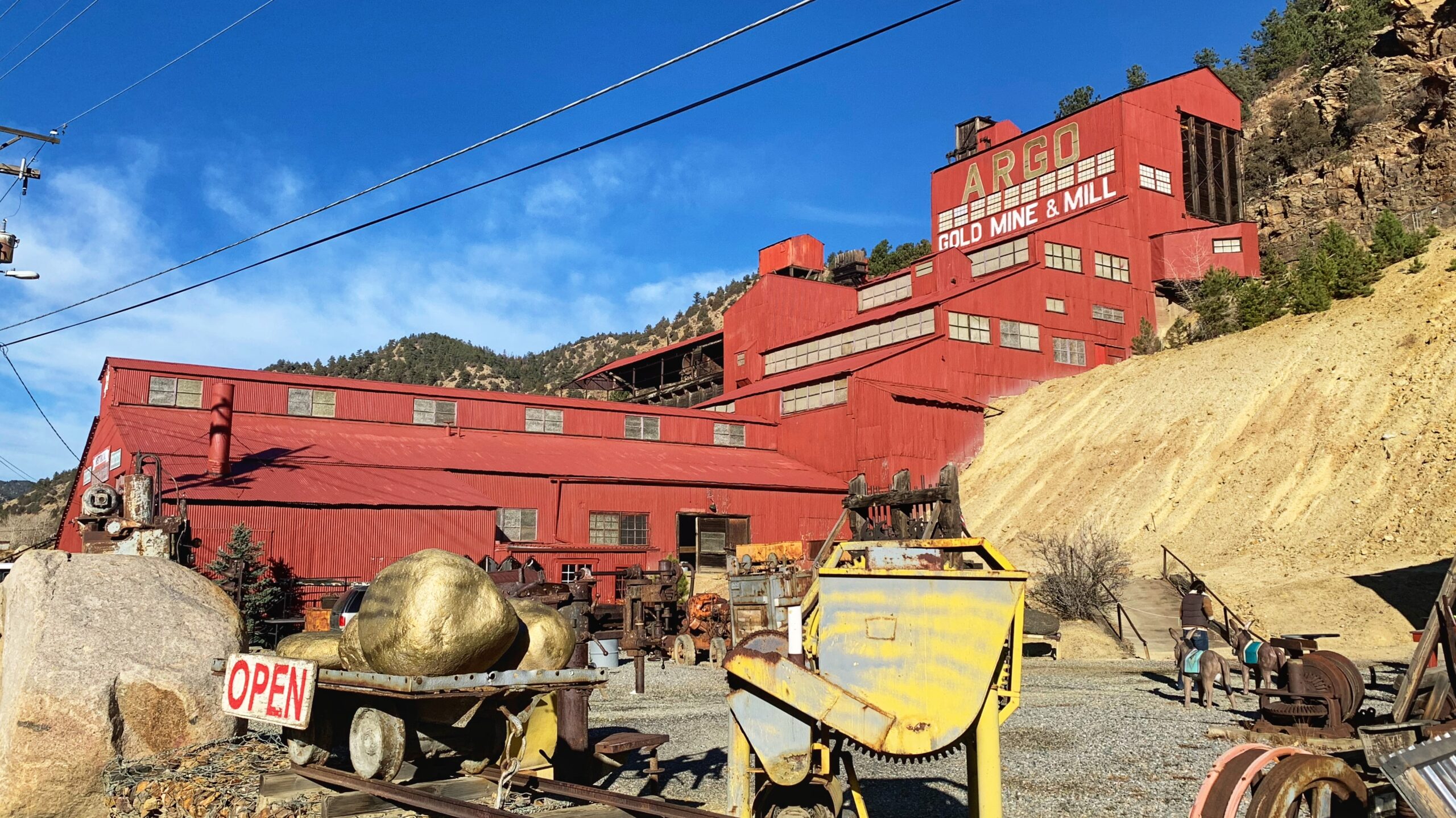 We arrived 45 minutes early for the 11:00 tour, parked, and wandered along Clear Creek for a bit. There were maybe 15 people on our tour. The guide did a good job, although I had a tough time not laughing at his hair—basically a crew cut with a triangle patch of longer hair that originated in the center of his skull and hung forward like bangs. We saw the process backwards. When operating, the ore was brought in at the top, just below where the word “gold” is on the top section of the building. It started as chunks about the size of a loaf of bread. It was fed through presses like this one (the original ones were much larger and no longer exist). The canister-looking things on the bottom of each post crushed the ore to the size of ping-pong balls. 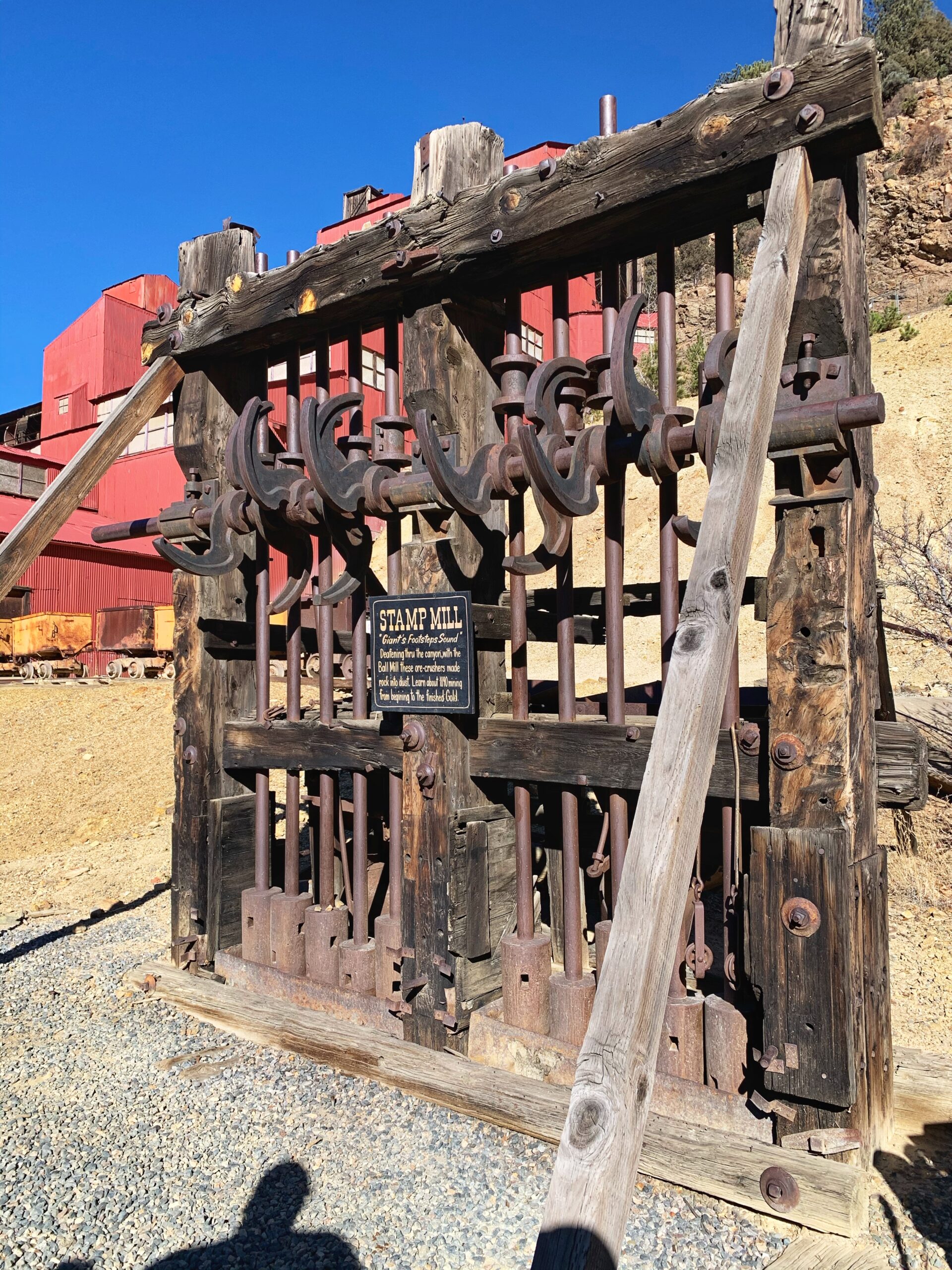 Here’s where the original stamp mills were located. 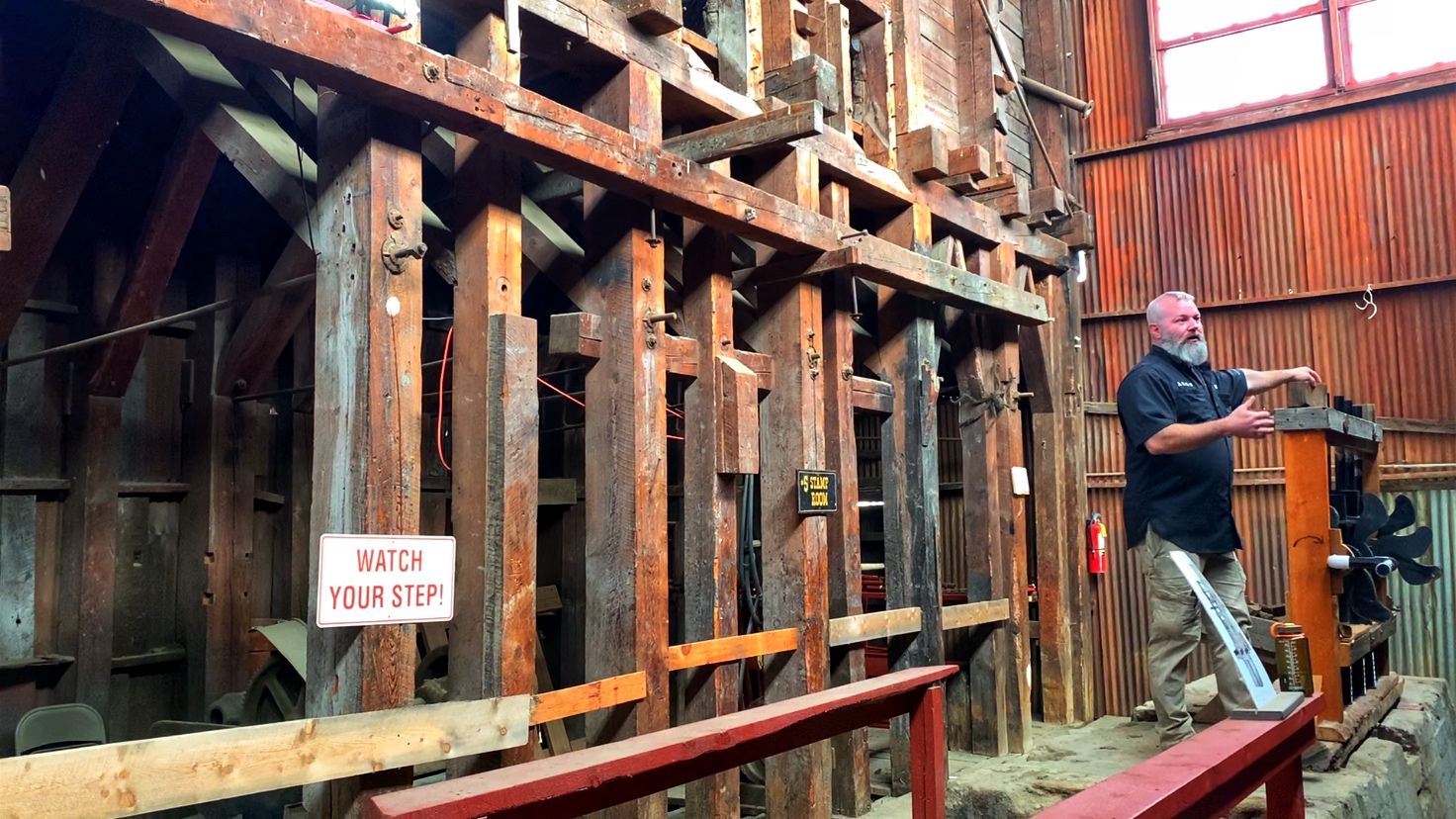 I’m not as clear about the rest of the process. The smaller chunks were worked down through the mill, using gravity (which is why the building was guilt on a slope). Part of the process was chemical, using mercury and other stuff to separate the gold from the other minerals. 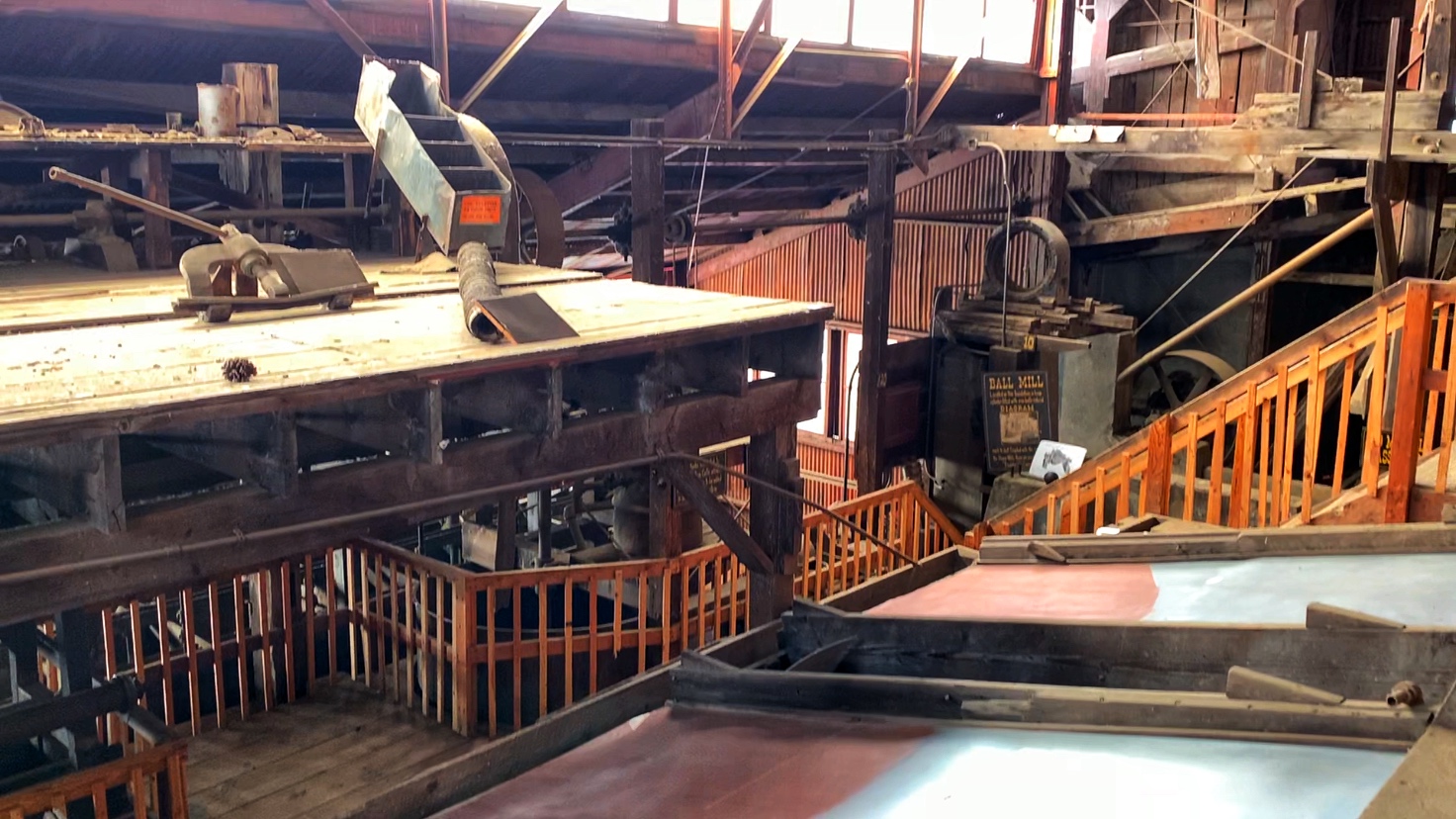 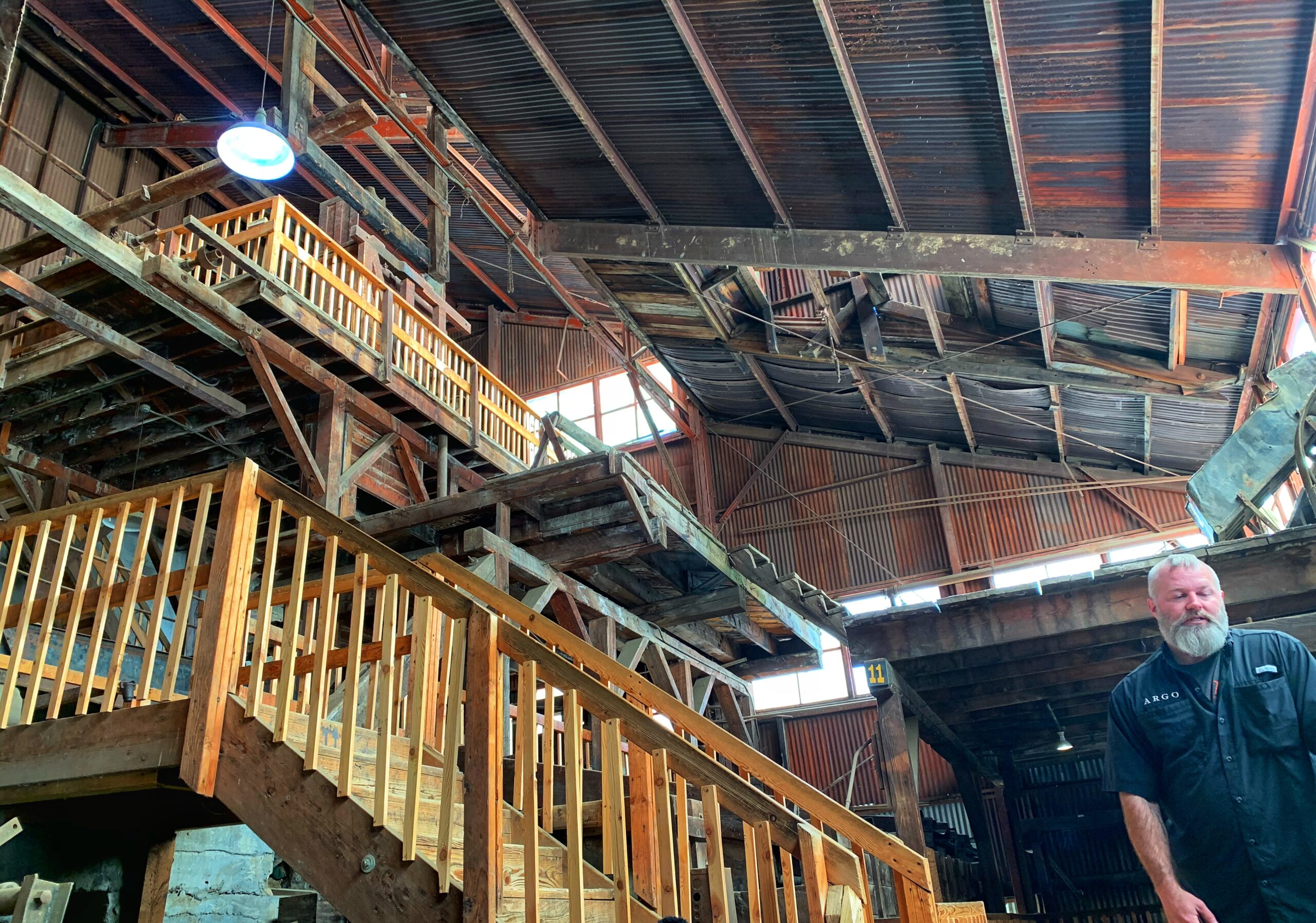 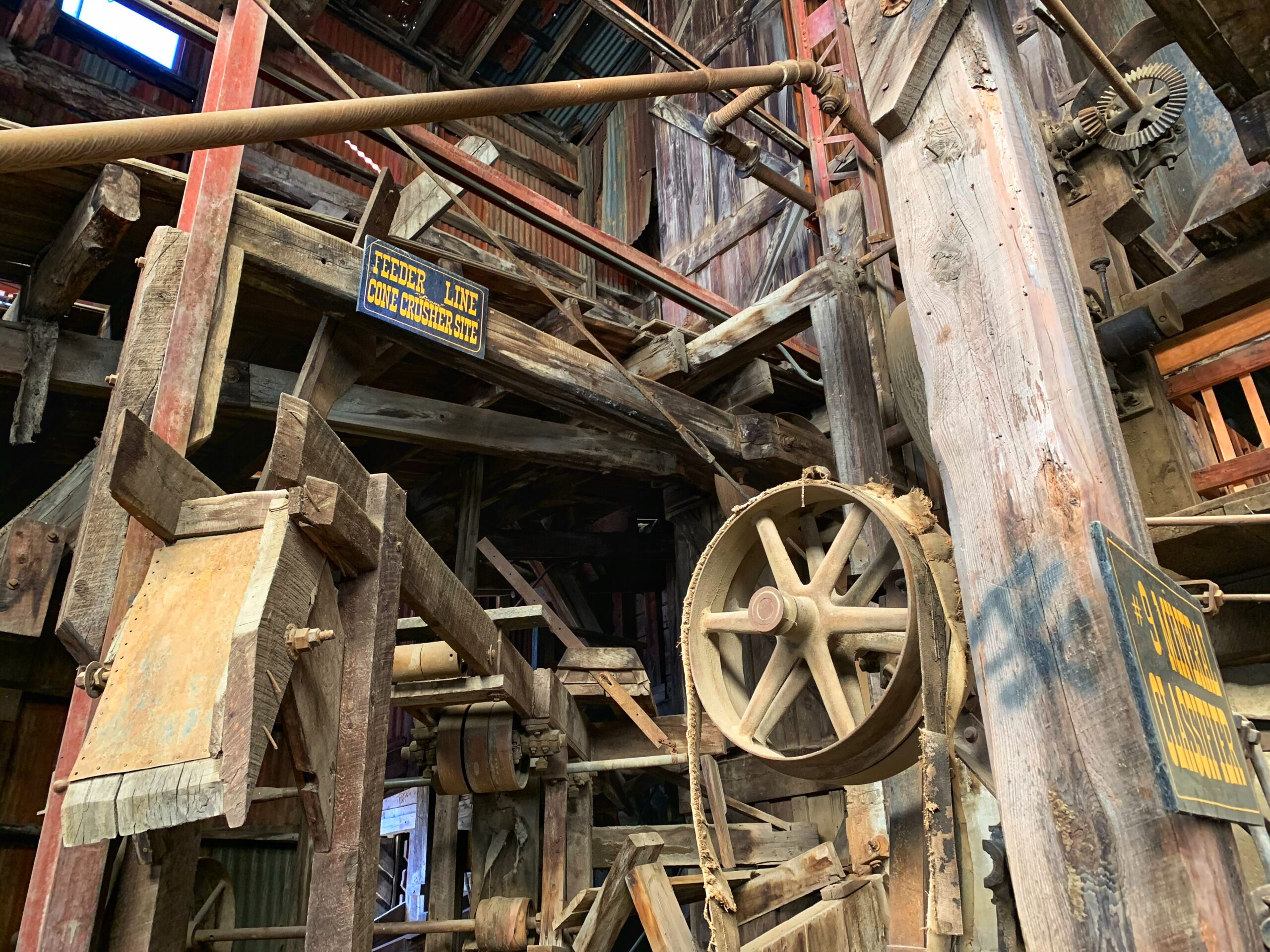 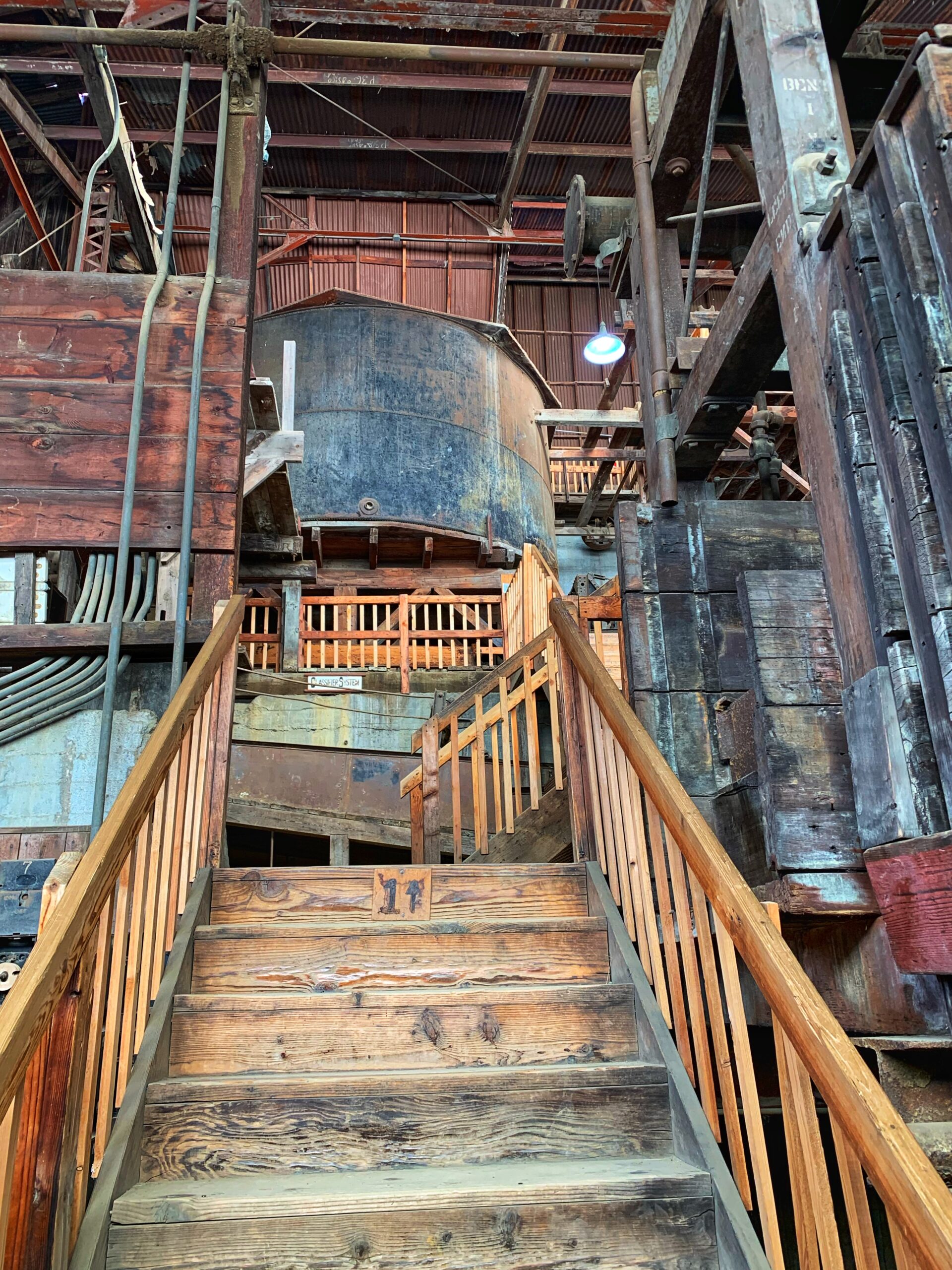 The ore dust was finally sifted on four tables like this. When the tables were shaken, the gold actually went uphill and collected at the top. 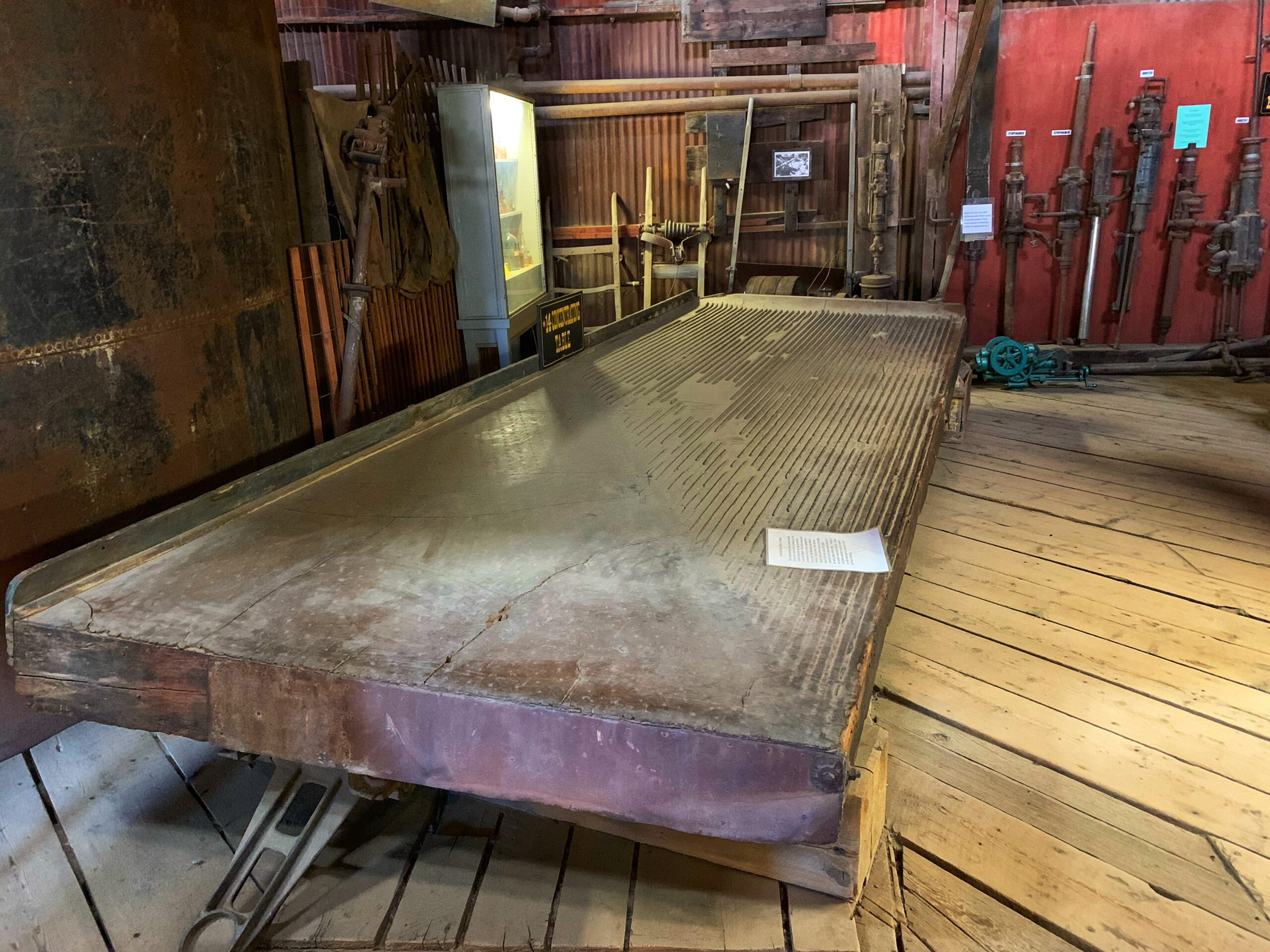 The mill make a lot of money, as did the workers. But for them there was a cost. The stamp mill was so loud, they all went deaf within months. Supposedly, the noise could be heard in Golden, 25 miles away.

Various drills can be seen on the wall in the background. Our guide explained how they were used in gold mines to bore into the rock. The process created tons of dust that would coat the miners’ lungs and cause fatal silicosis. Many died withing 6 months. Others, particularly smokers whose lungs were coated with tar, lasted 3 years. Doctors would prescribe cigarettes to miners to prolong their lives. One couple on the tour were wearing masks. The guy (in a way that I perceived to be smug but maybe wasn’t) asked if the miners wore masks. The guide said no, because masks didn’t do any good. The dust simply went in from the sides. By the time we got to the tunnel, the couple had removed their masks and never put them back on.

The tunnel entrance was about 200 yards from the top section of the mill. Here’s a map of all the mines that emptied into it. Idaho Springs and the mill are at the far left. Construction of the tunnel began in 1893. It took 16 years to drill 4.16 miles back into the mountain to connect with close to 100 mines. At the Central City end, the tunnel was 1,300 feet below the surface. Ore was carried out in carts pulled by small electric locomotives. The tunnel sloped down slightly to allow for drainage. 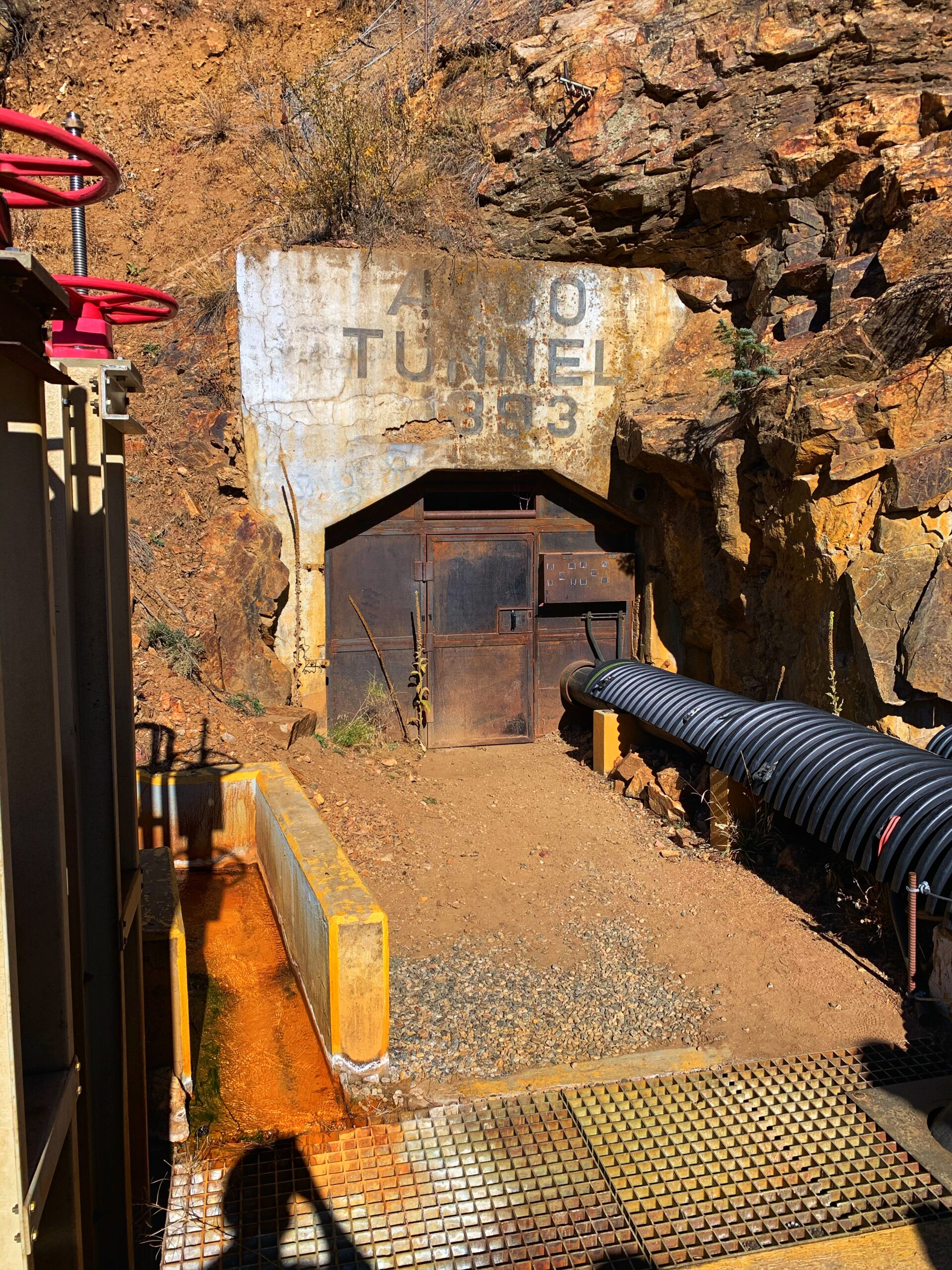 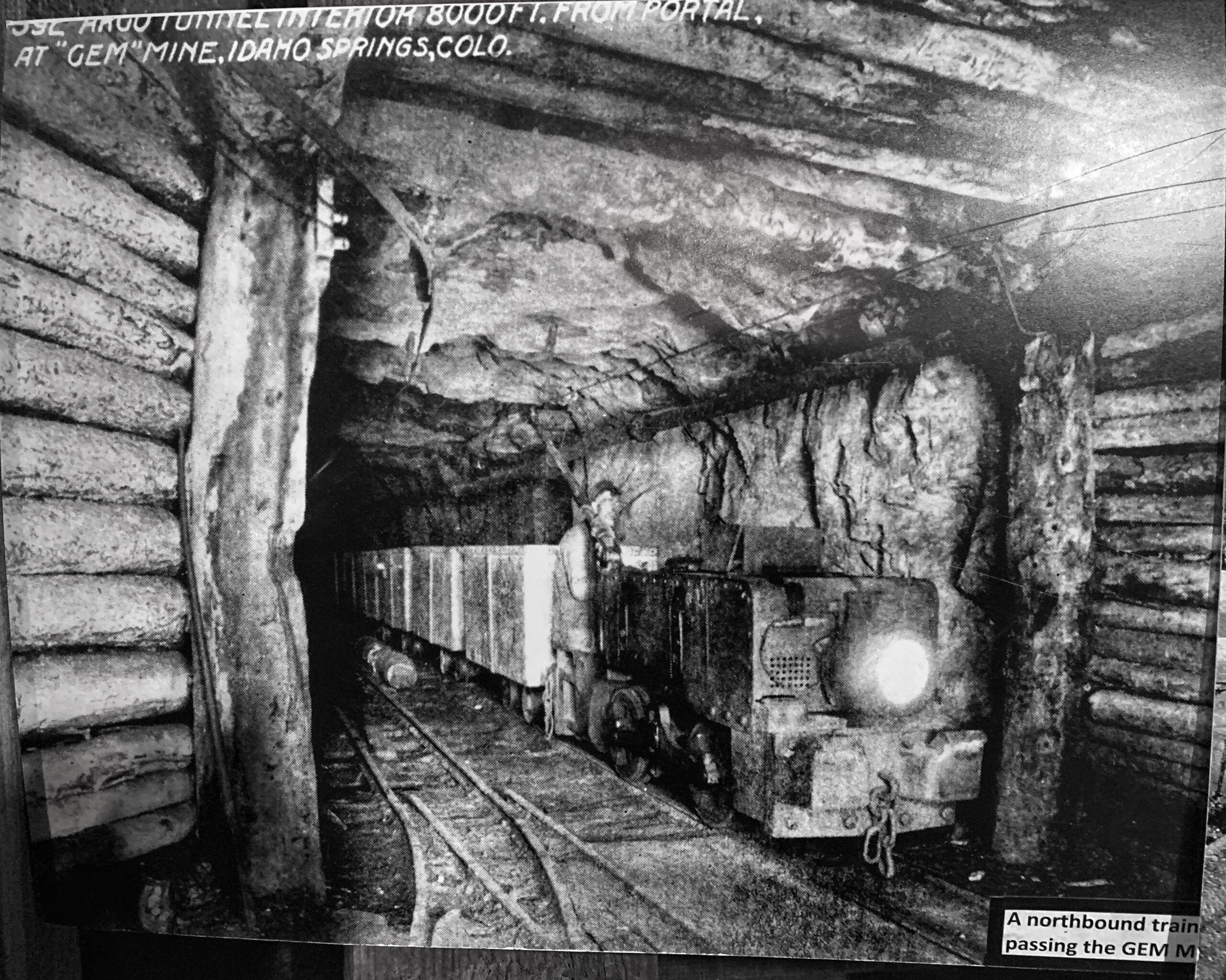 It all ended in 1943 when four miners tried to bore through the tunnel wall to access a flooded mine. The water pressure burst through the wall, killing the four men immediately.  Water burst down the tunnel, sweeping away equipment and flooding the town. For seven hours, a massive flume of water burst out of the tunnel, destroying houses and anything else in its way. The tunnel and mill never reopened. Most of the tunnel is now filled with four feet of toxic sludge. About 50 yards of it have been drained so tours can enter. A vault door keeps the gunk back. 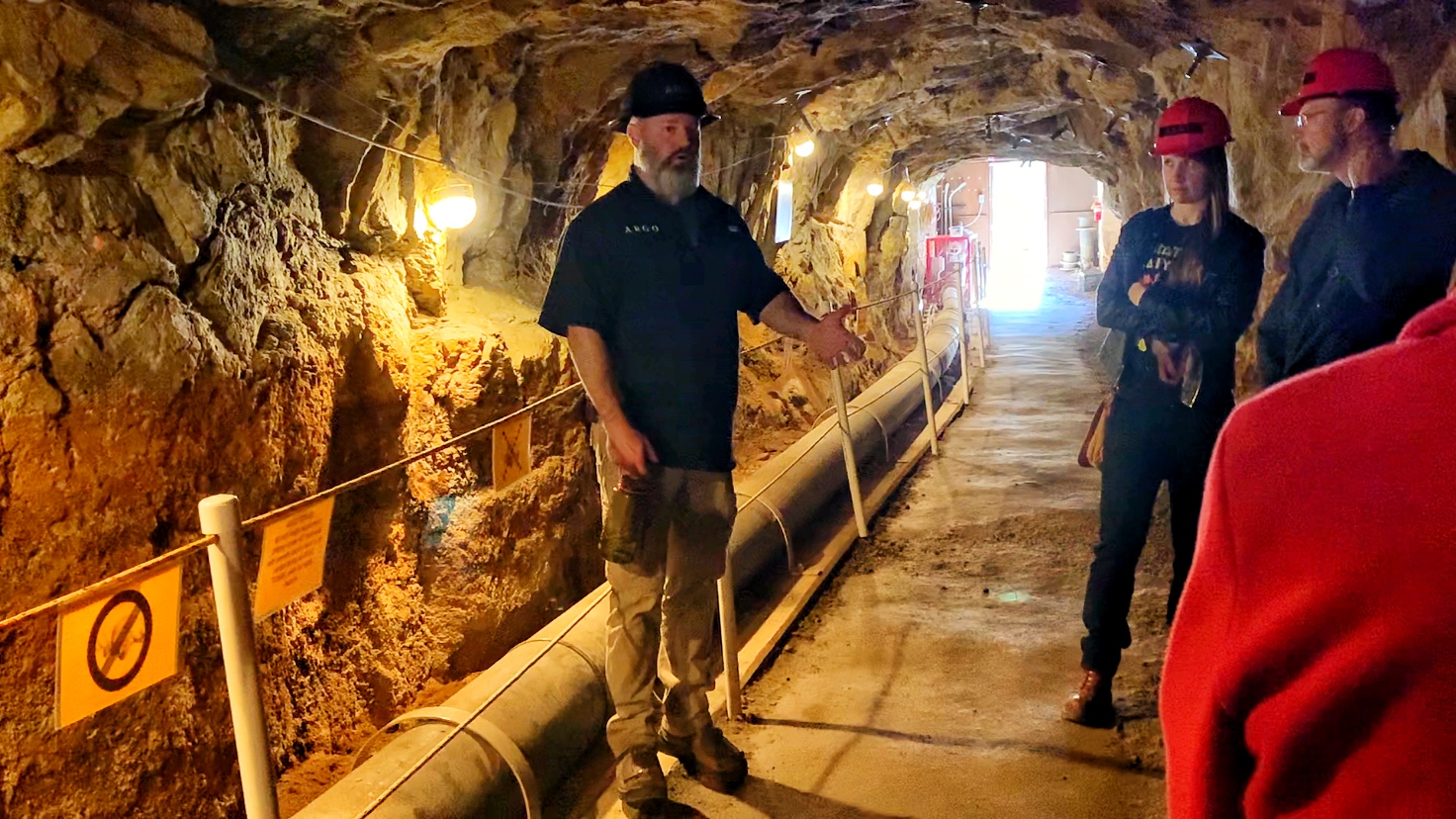 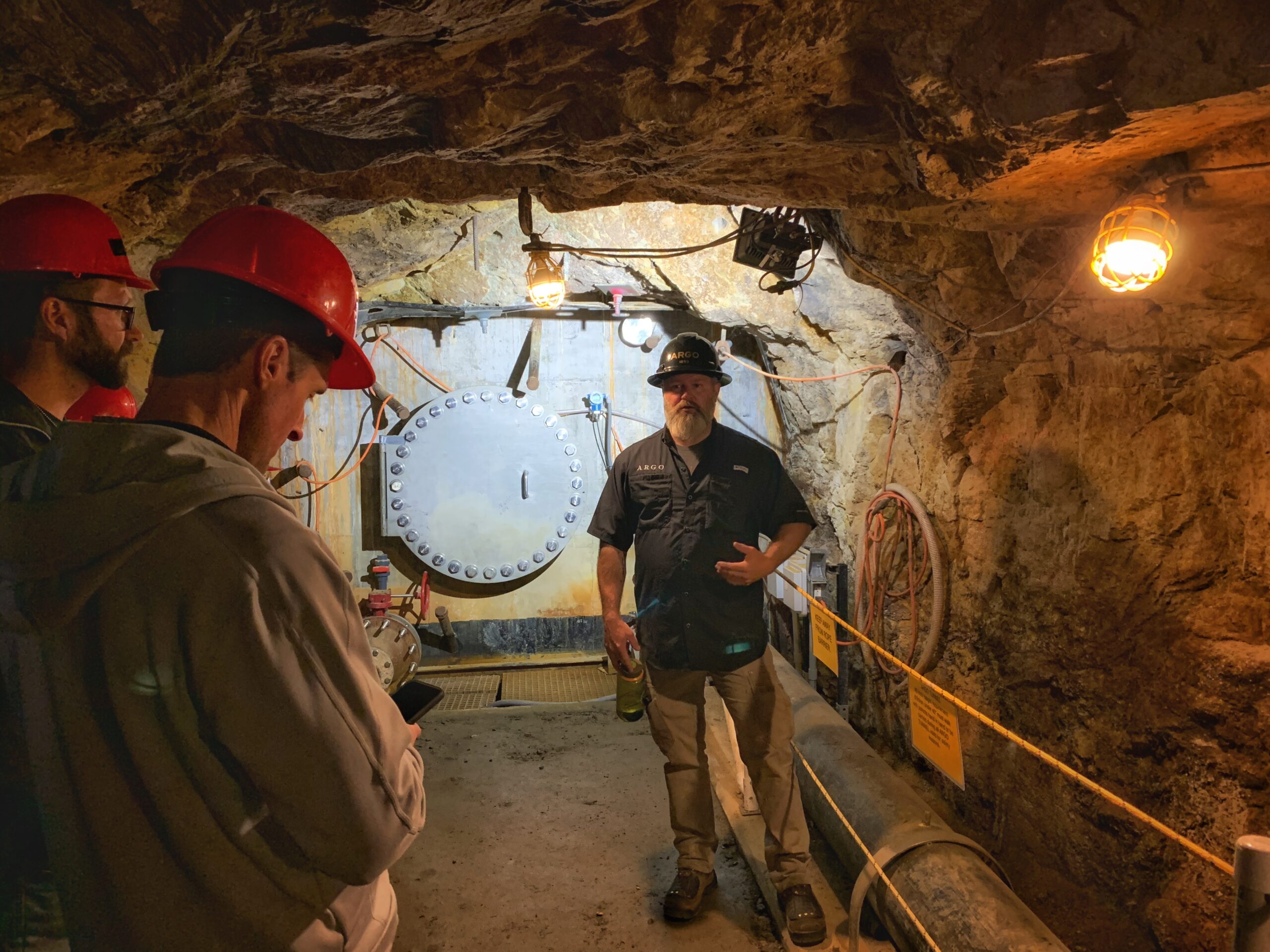 Another great attraction in Idaho Springs is a statue of cartoon character Steve Canyon. 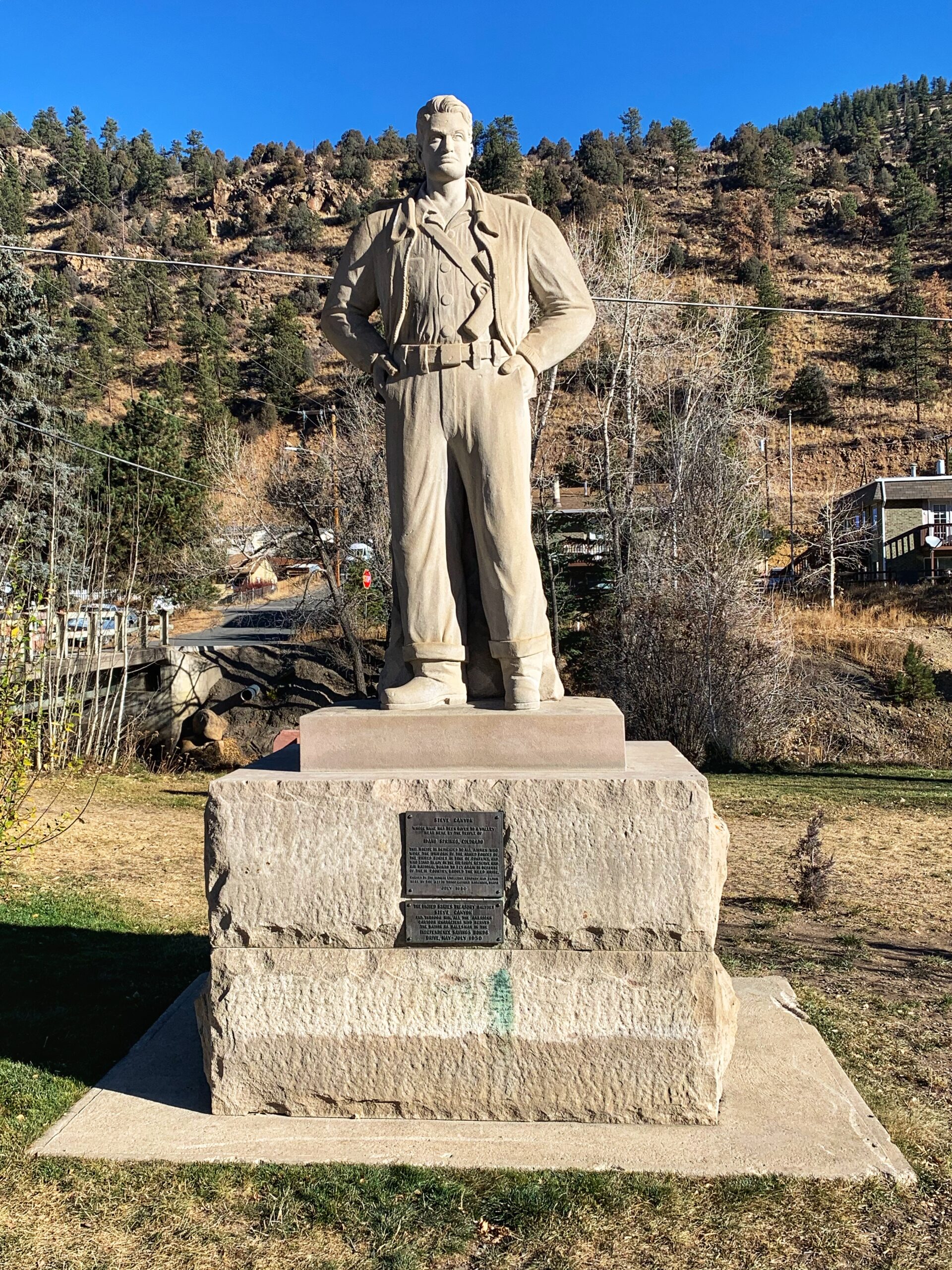 Here’s the plaque at the base of the monument, and you now know as much as I do. 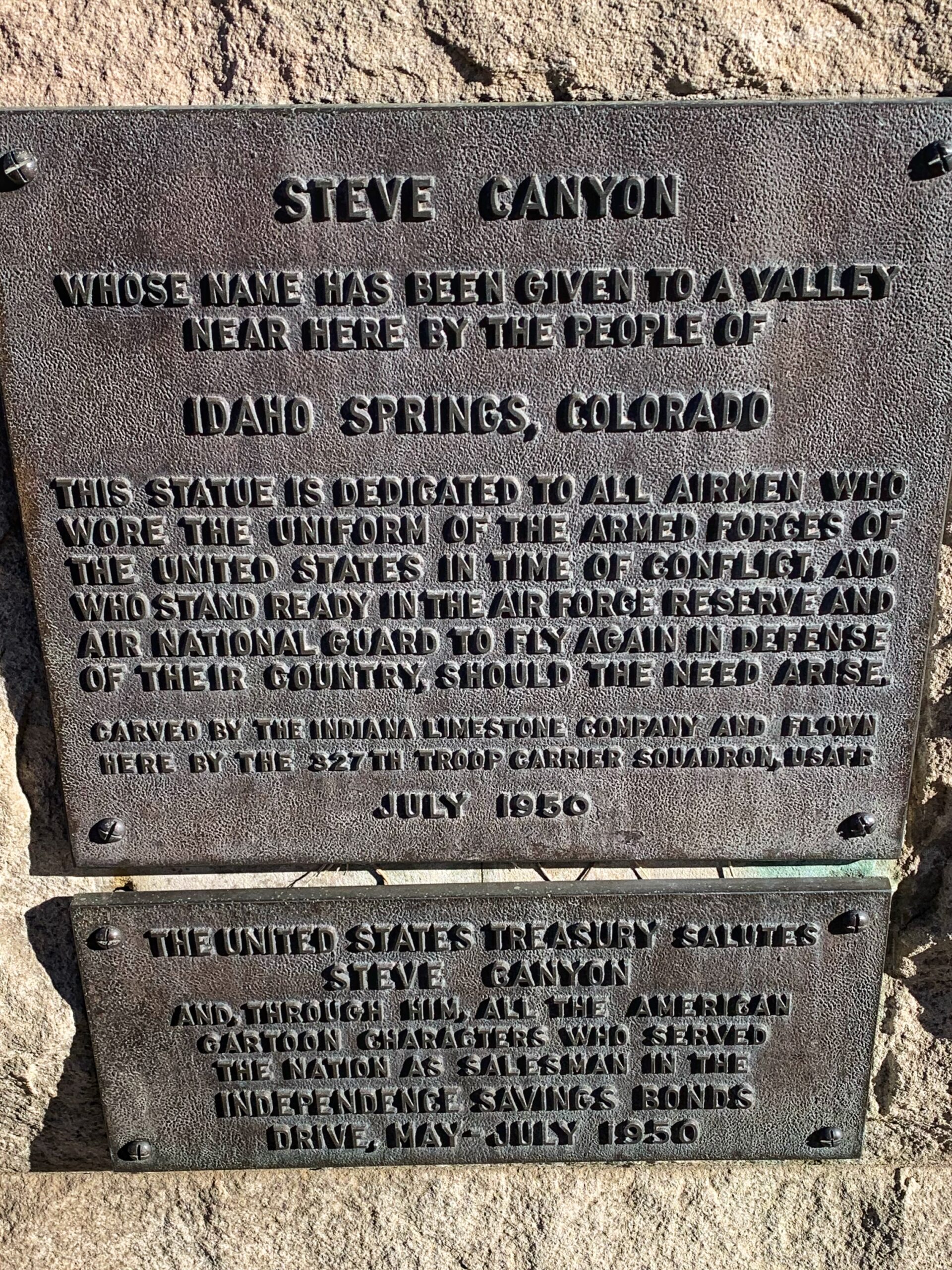 We ate a delicious lunch at Smokin Yards BBQ. It’s my third time eating there and I like their sauce about as well as any I’ve had. We then attempted to wander the streets of downtown, but couldn’t find a parking space and so gave up and went home. The open spots were posted for residents only. All other spots were filled— and cost money. It seems odd to charge people money to shop in your town, but apparently it’s working.