I’ve been aware of the Incline since we moved to Colorado. Almost everyone I talked to had hiked it at least once. I figured it was something I needed to do sometime, but I hadn’t gotten around to it. I was reminded of it every time I looked up at Pikes Peak from the south end of town. Here’s a shot from the Siamese Twins at Garden of the Gods. The Incline is that slash through the trees on the mountain in front of Pikes Peak. 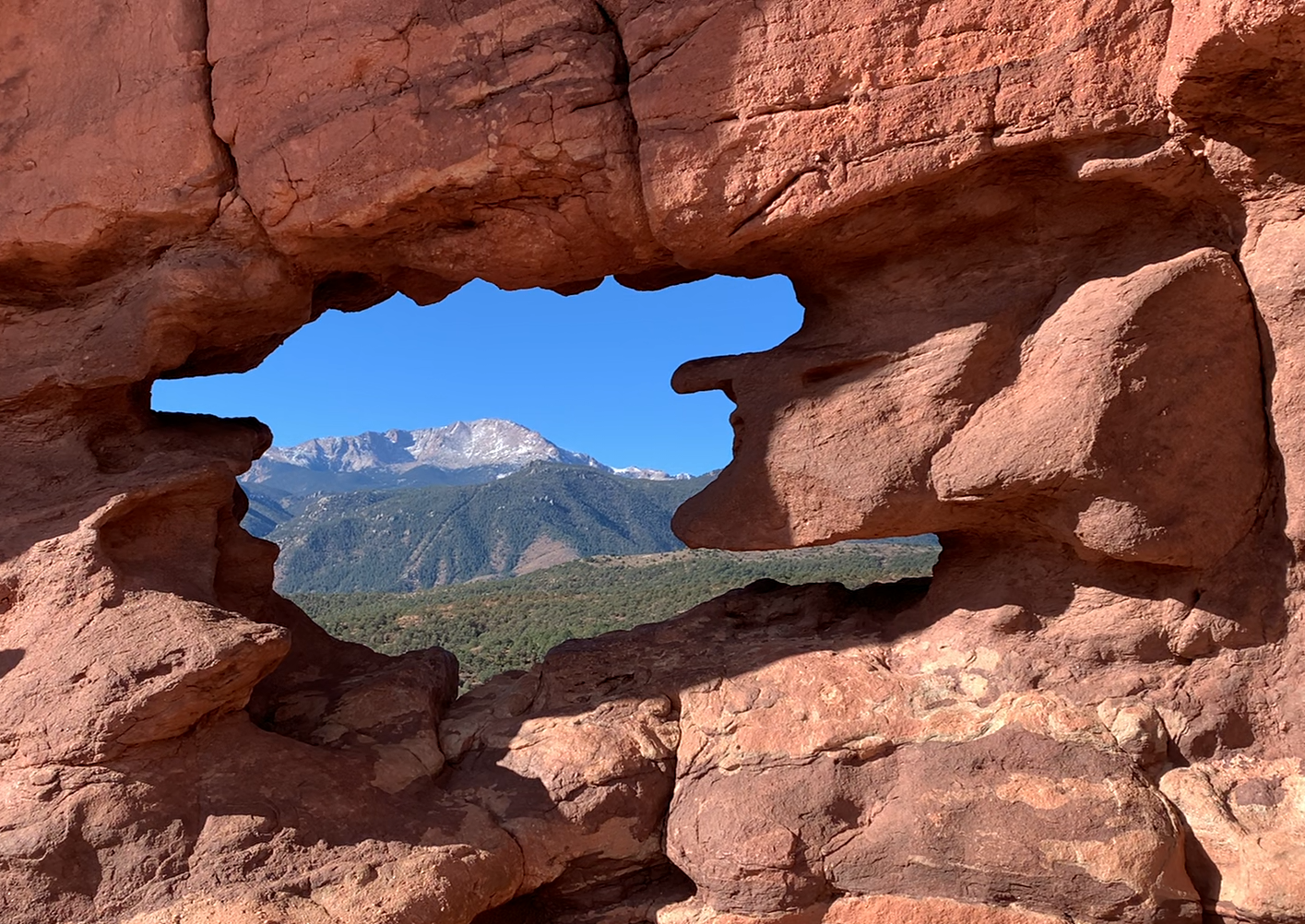 The Incline was built as a railroad to take supplies up Pikes Peak, then converted to a tourist attraction. After a rock slide damaged part of the track in 1990, the railroad was shut down. Locals began climbing the old rails, which was technically illegal until 2013 when it became a Colorado Springs attraction.

I happened to mention it to my great-nieces when they visited last summer, and they mentioned it to their parents. So when their family came for Thanksgiving, they said they wanted to do it. I made the reservations—necessary because Manitou Springs wants to control how many people climb it (but mostly because they want to force everyone to pay for parking). We drove over the day before Thanksgiving. My daughter and son-in-law came along. We took a shuttle bus to the base of the Incline. 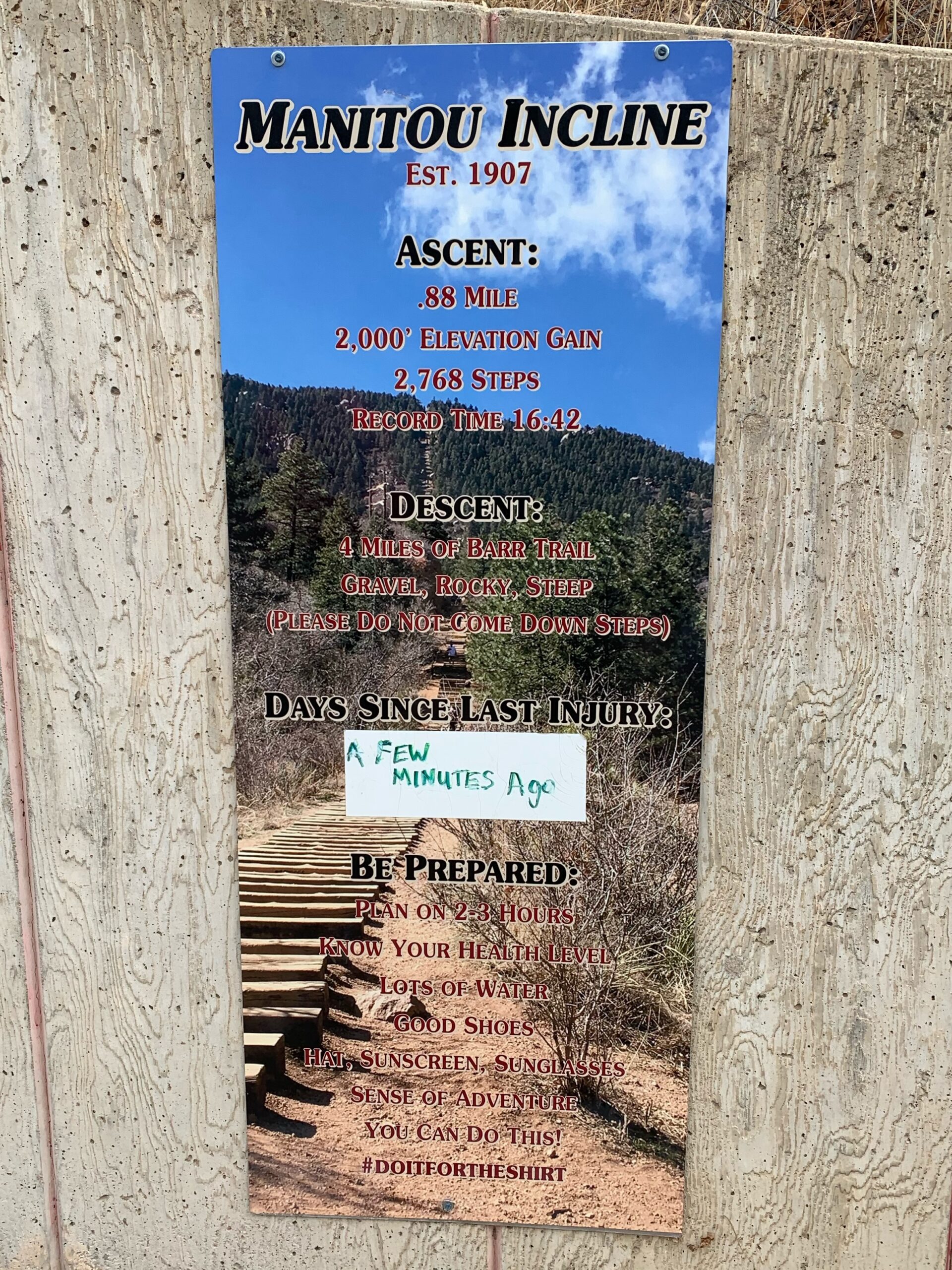 This is not a hike for wimps. Since we’ve lived in Colorado, I’ve heard of several people who have died of heart attacks on the way up. 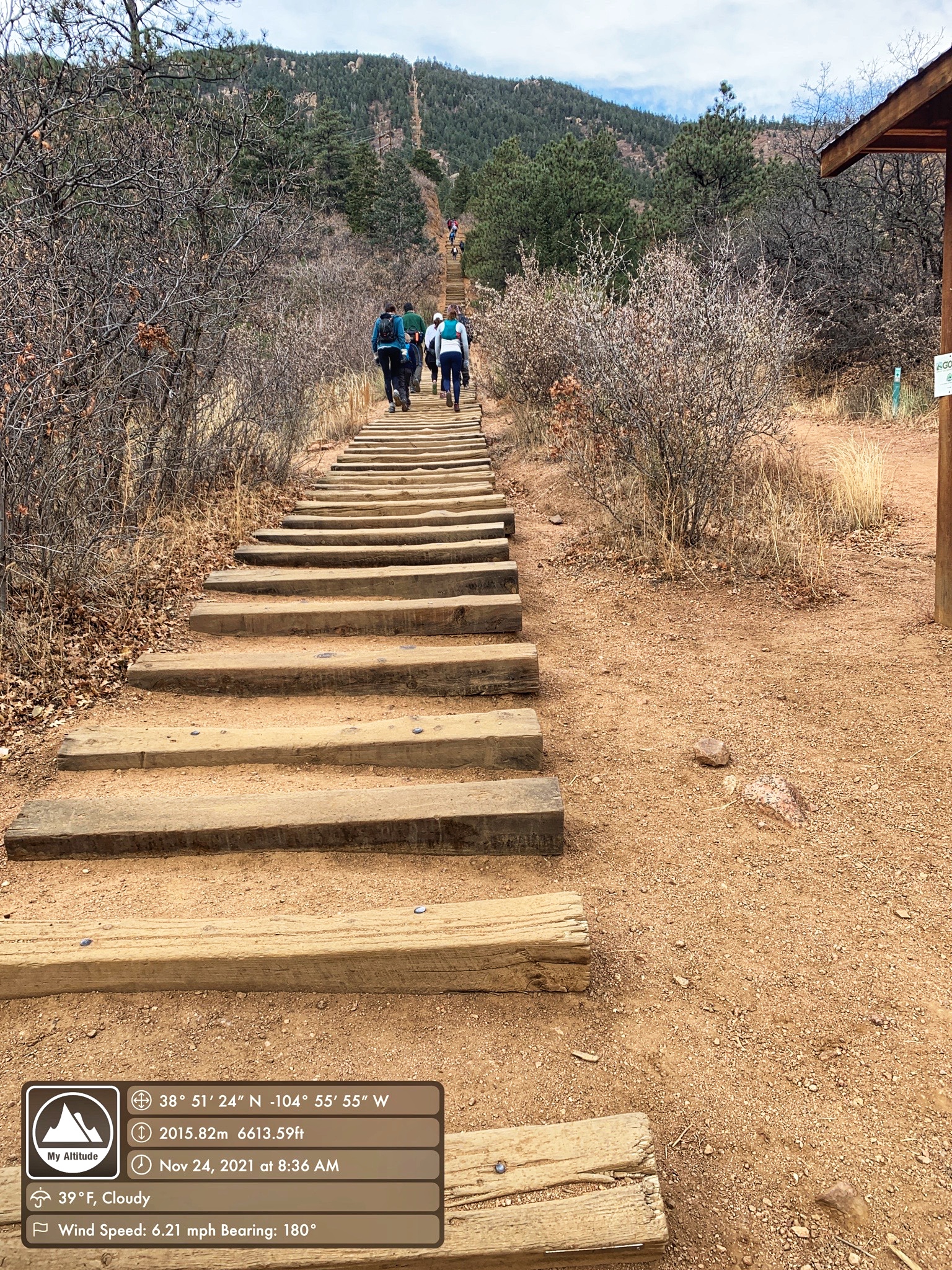 I knew I wasn’t going to set any records—probably not even for slowest ascent. Within the first few feet, most of my family was out ahead of me. My daughter and I stuck together. At first, we were resting every 80 steps, but even that became ambitious when we came to the steeper part. 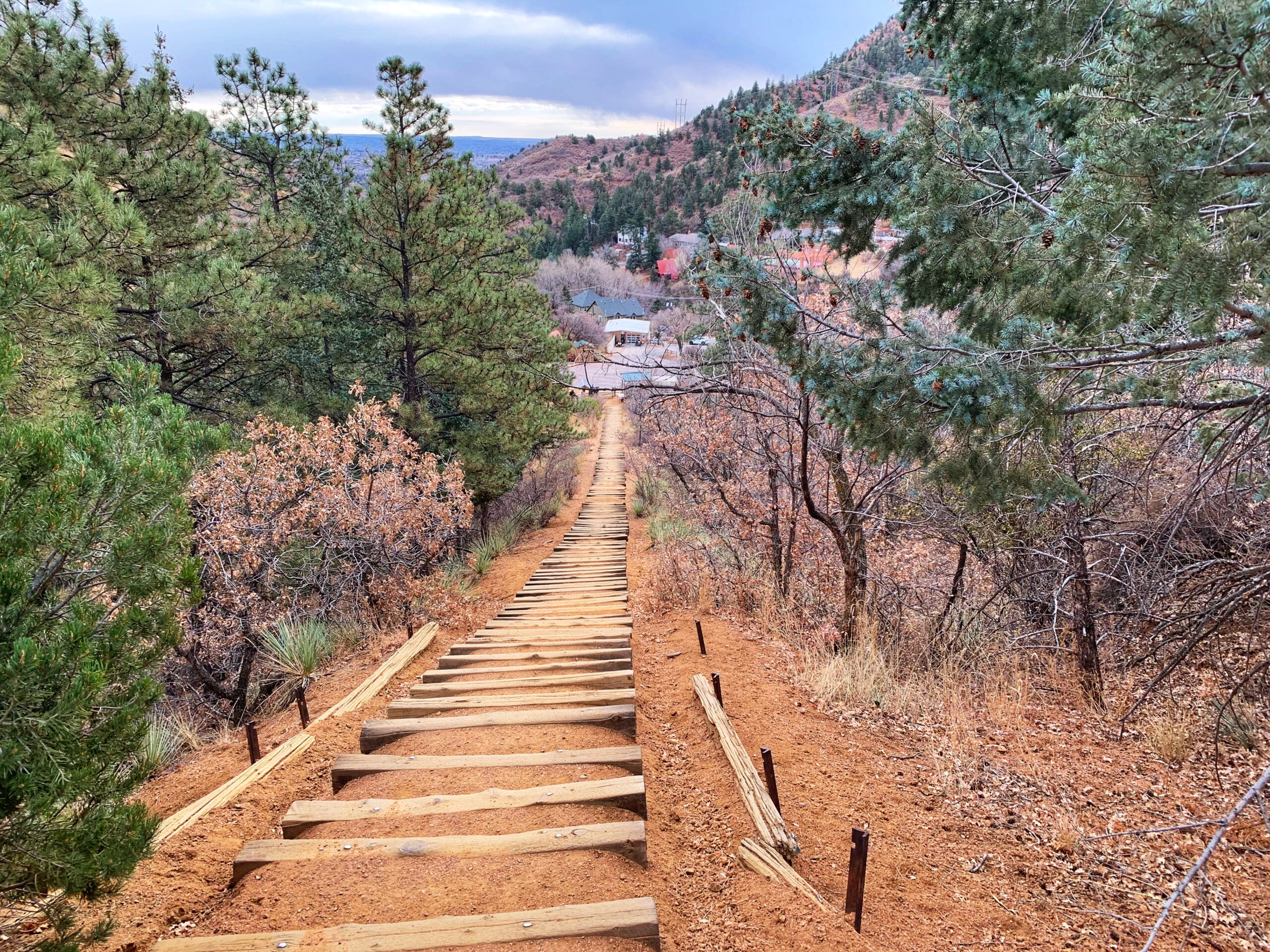 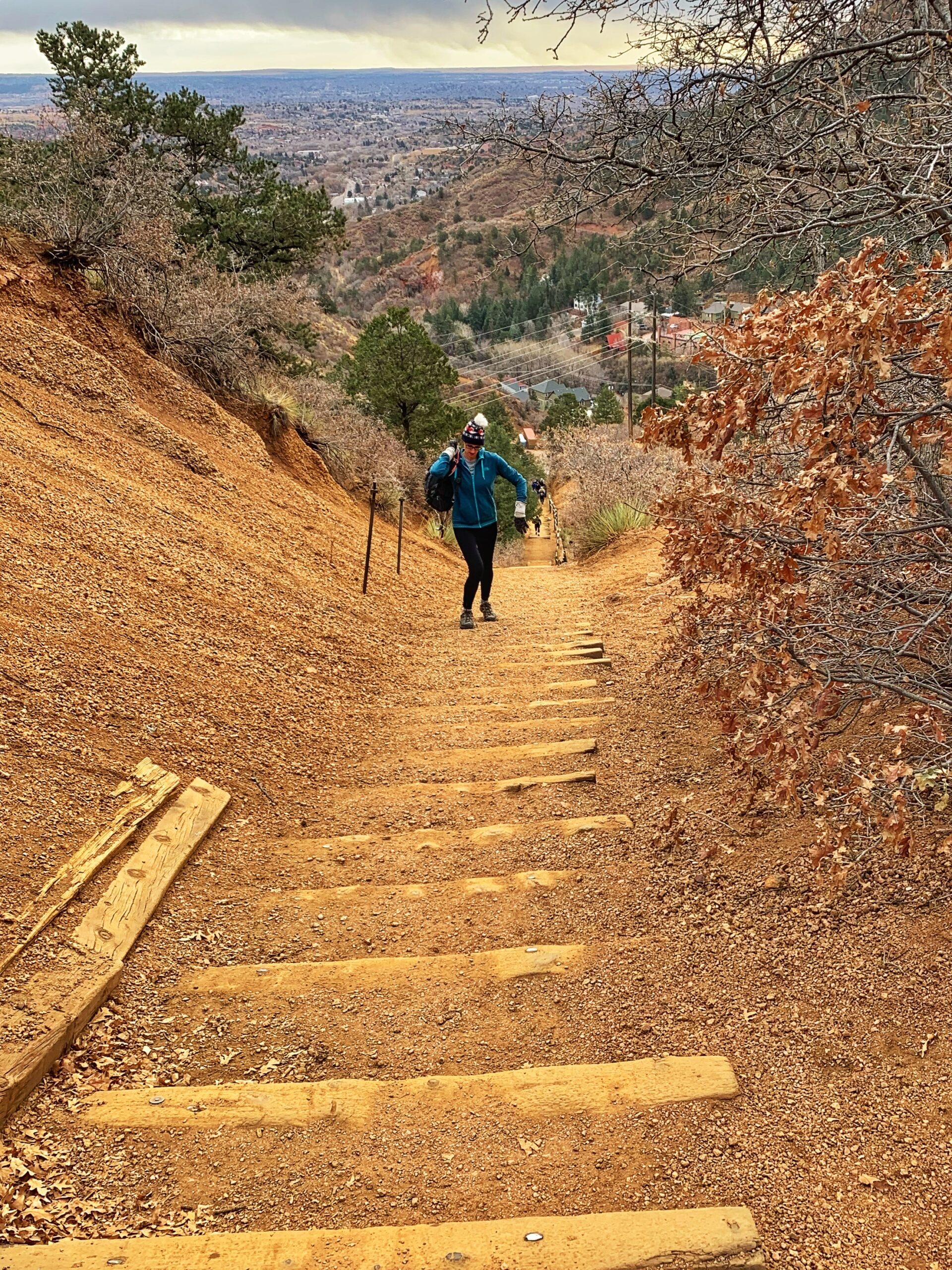 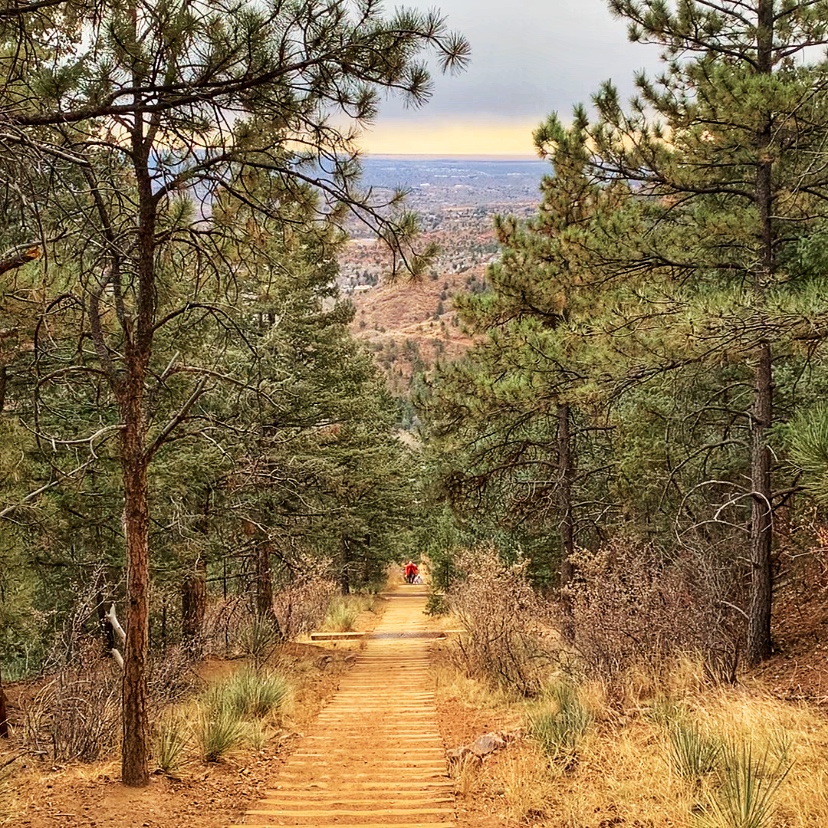 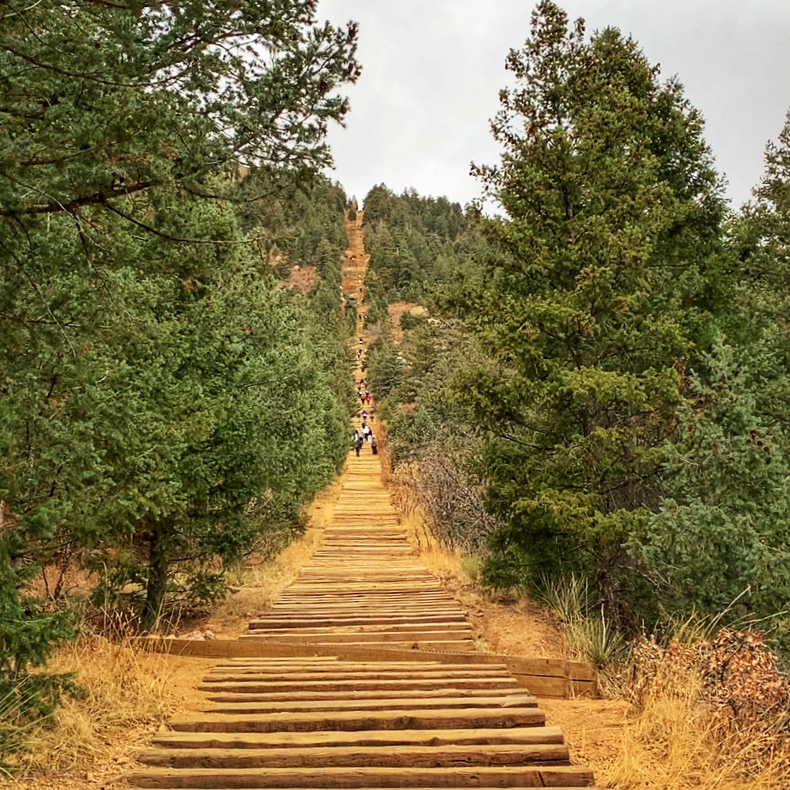 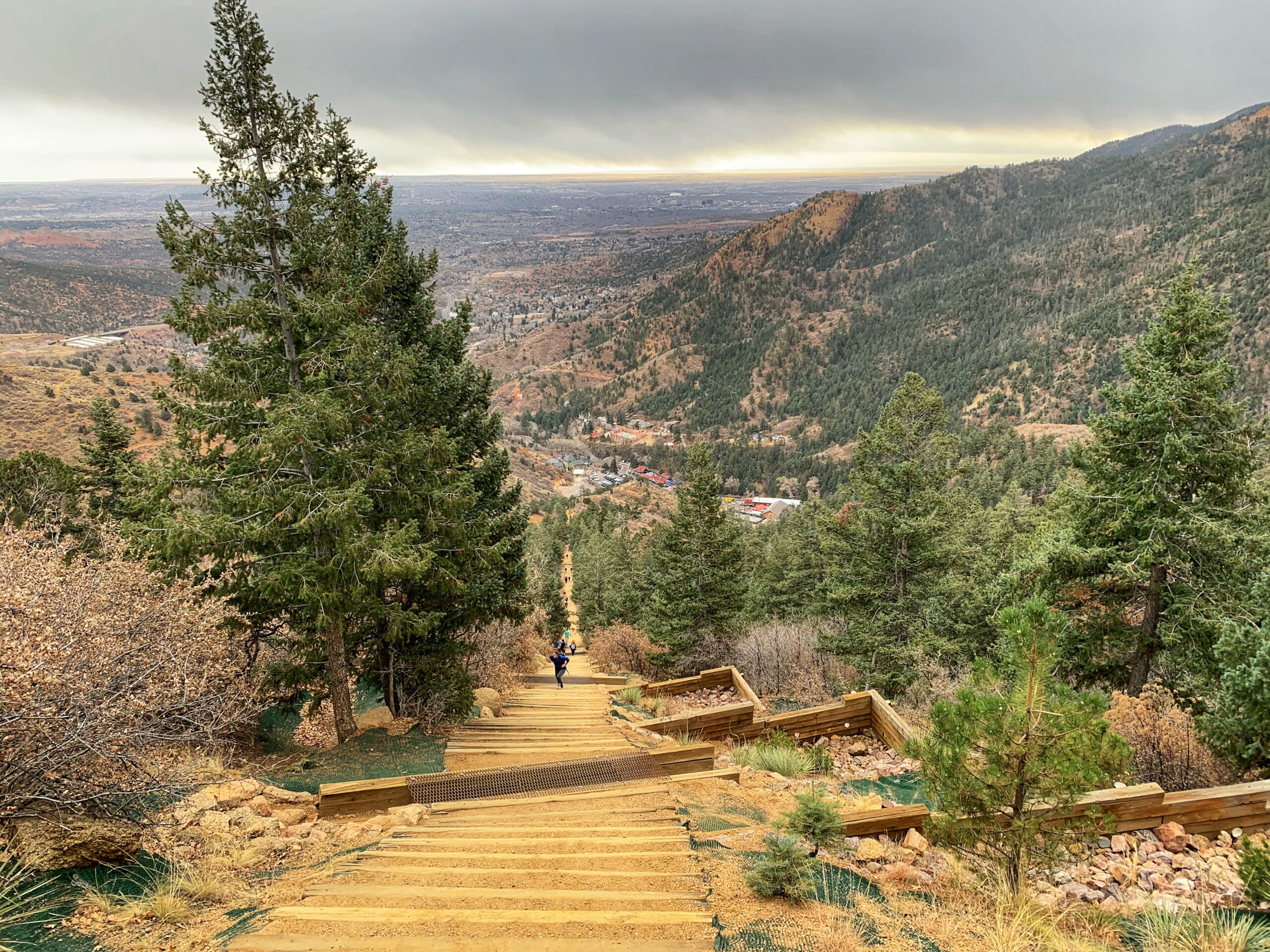 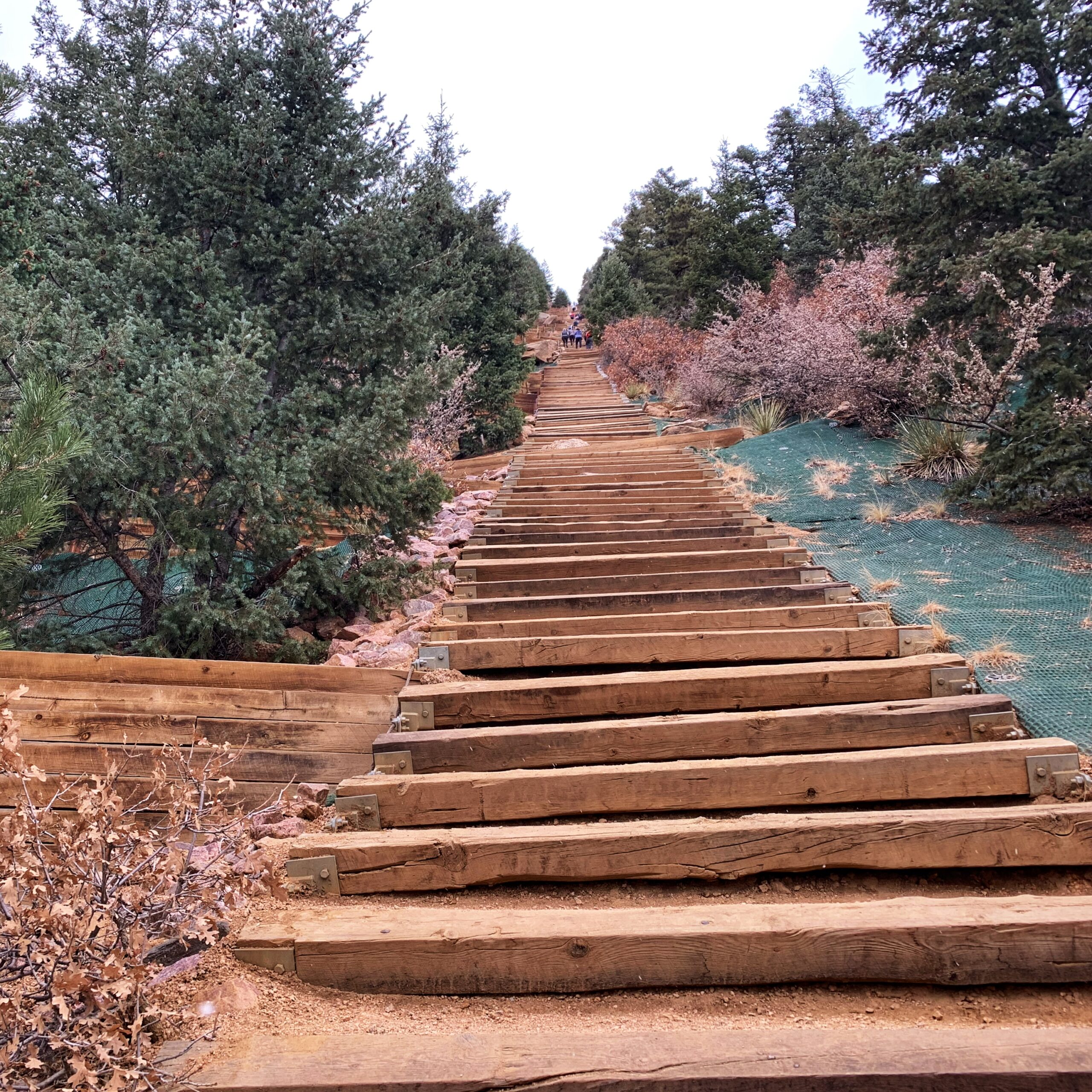 It snowed for a while as we were climbing, but it didn’t amount to much. 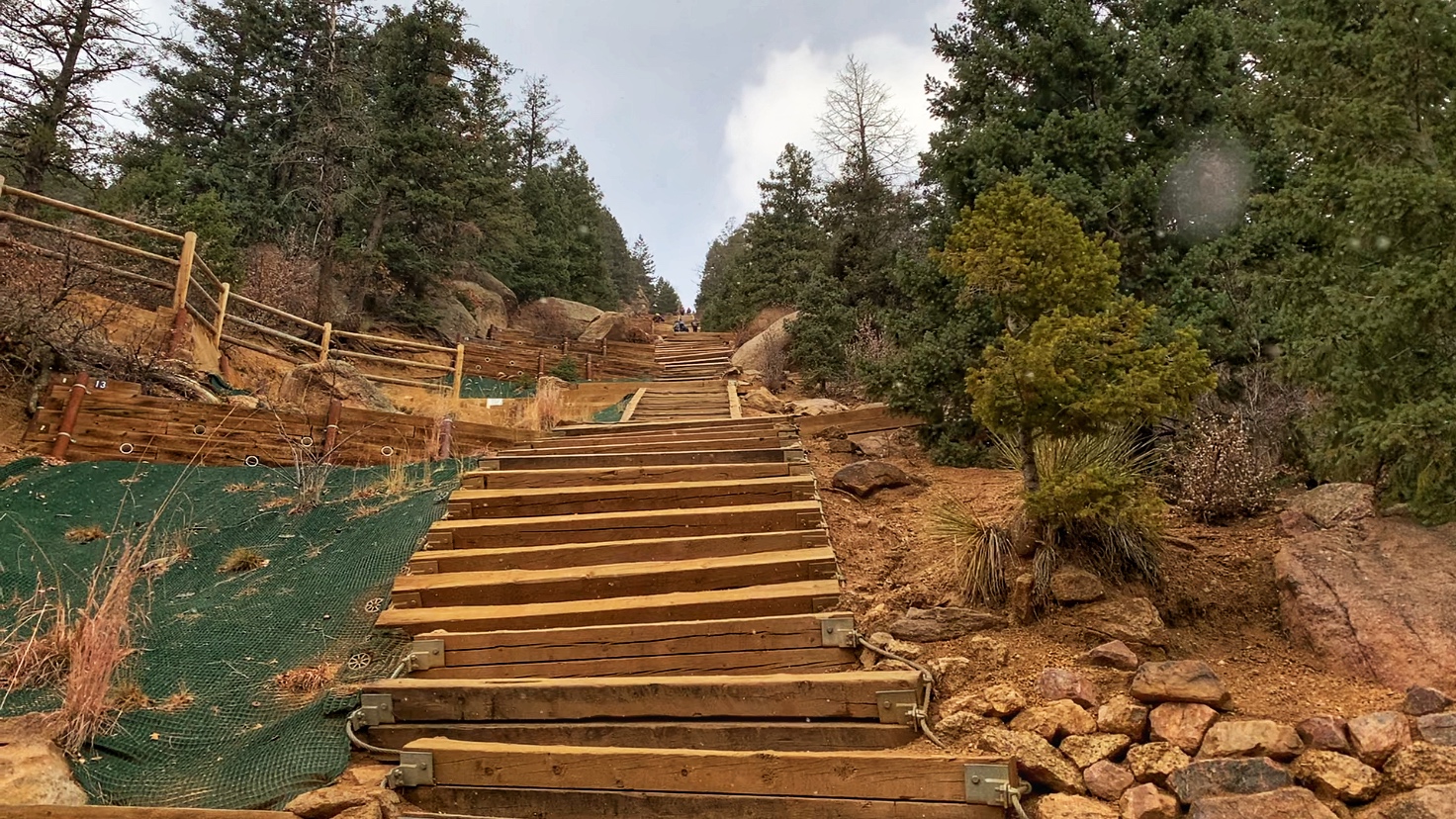 This shot looking down on Manitou Springs gives a good idea of how steep it was. 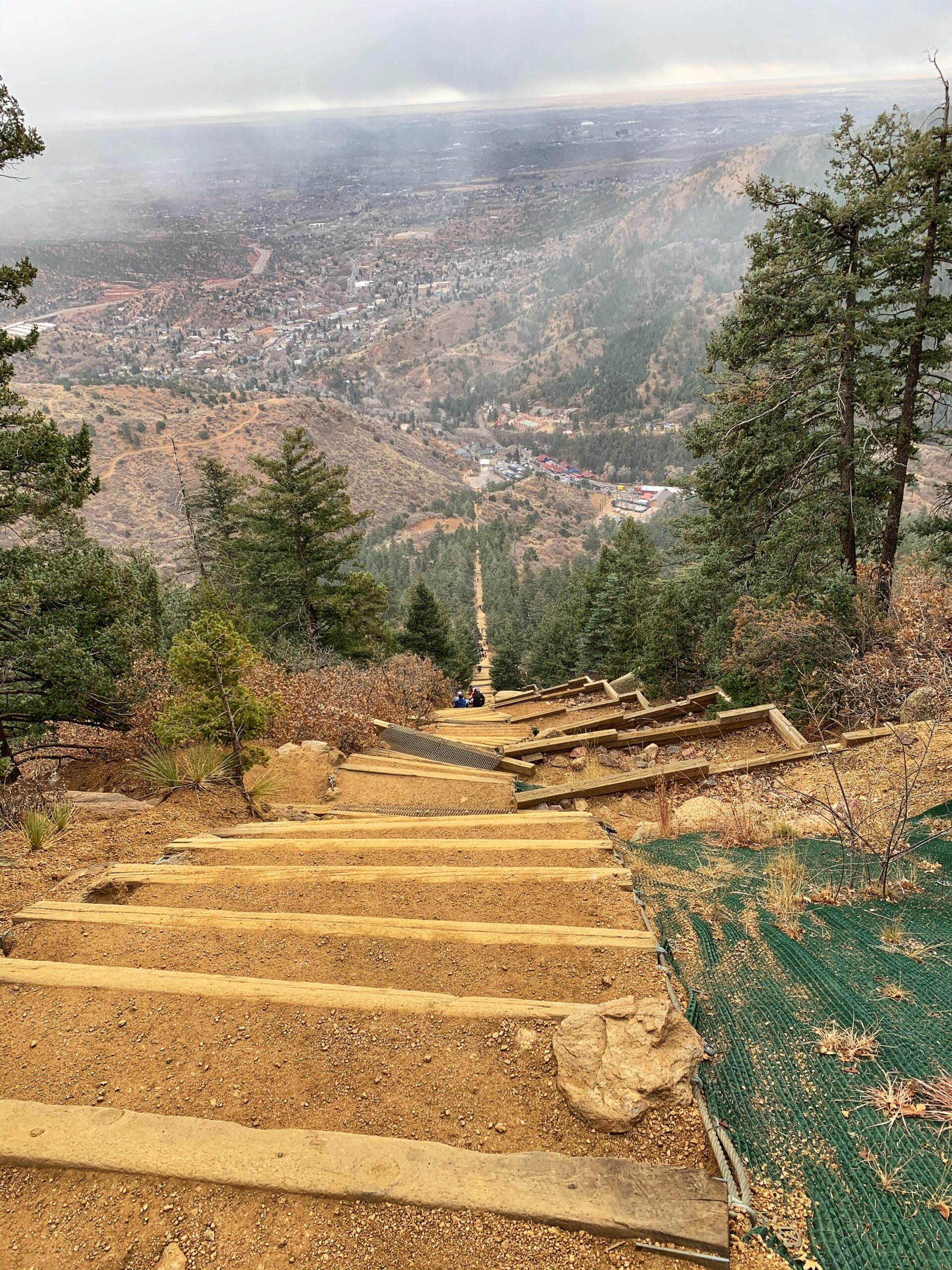 Looking up and down from the false summit. There were still 300 steps to go. 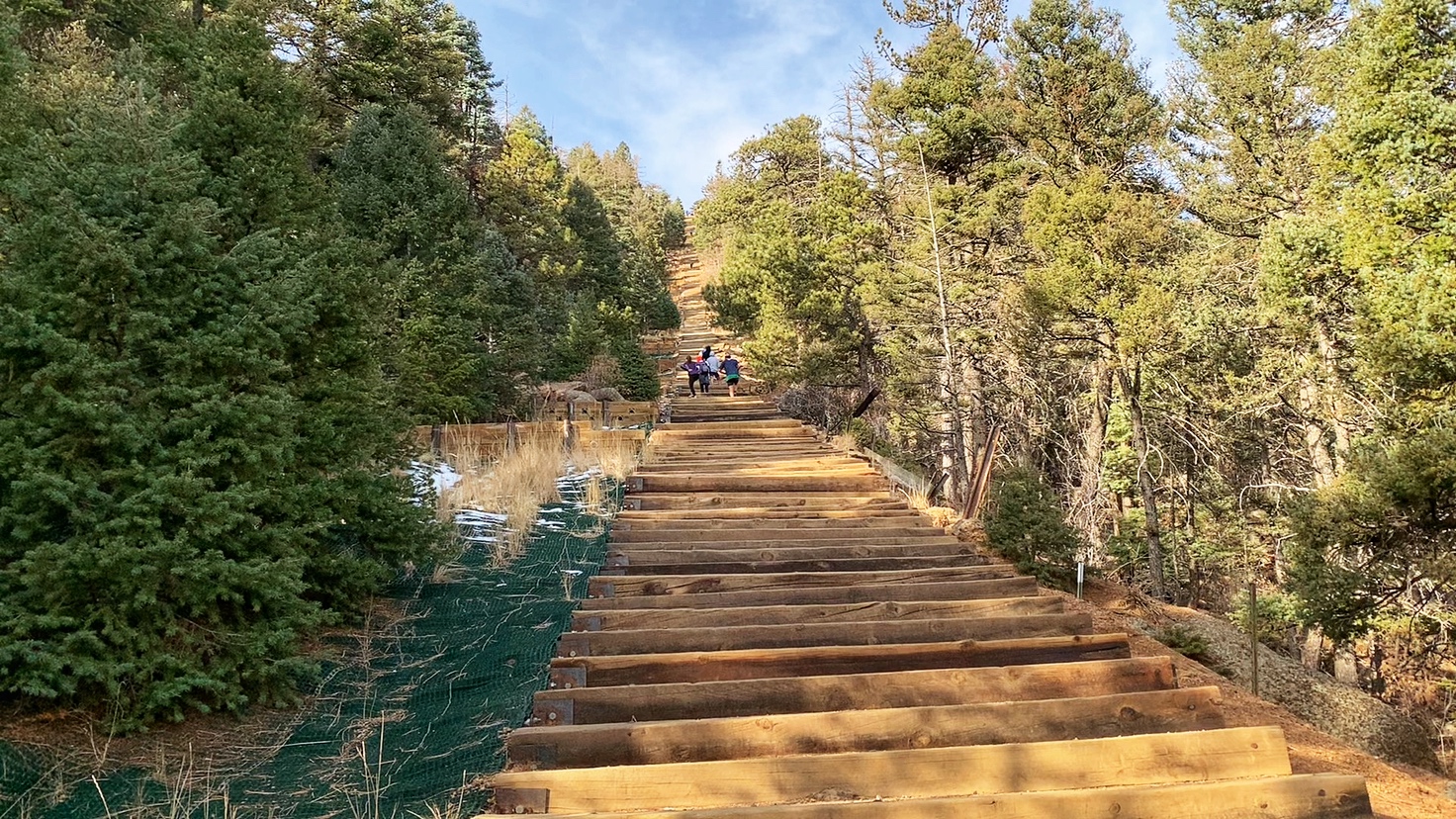 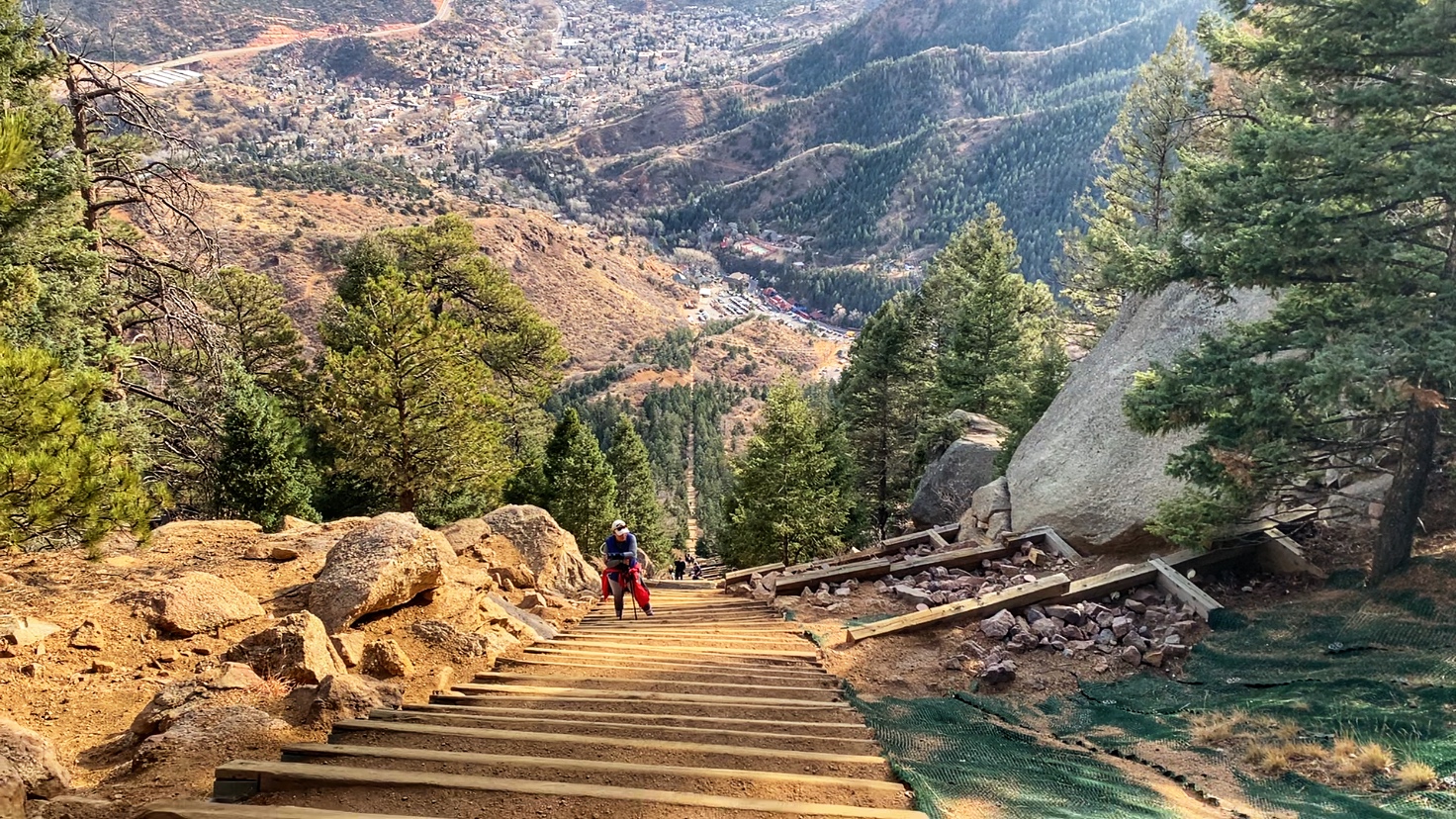 My great-nephew and son-in-law both made it up in about 36 minutes. My nephew was a few minutes behind them. The rest got to the top around the hour mark. My daughter and I were still far below. I was having my usual problems with exerting myself at altitude—dizziness and the feeling of carrying a 20-pound rock in my stomach. But I knew I only had to do this once to be able to say I did it, so I kept going. One thing that made it difficult was the unevenness of the steps. They were slanted in all directions, varying distances apart, and of unequal height. I was unable to get any rhythm going. On the few stretches where they were even—even on a steep bit toward the top—I did much better.

My son-in-law actually came back down to meet us at the false summit and walked back up with us. That was a huge encouragement. When we got about 12 steps from the top, with the family cheering us on, we “sprinted” to the top step. I was feeling fine soon afterward. We’d hiked it in almost exactly 90 minutes. 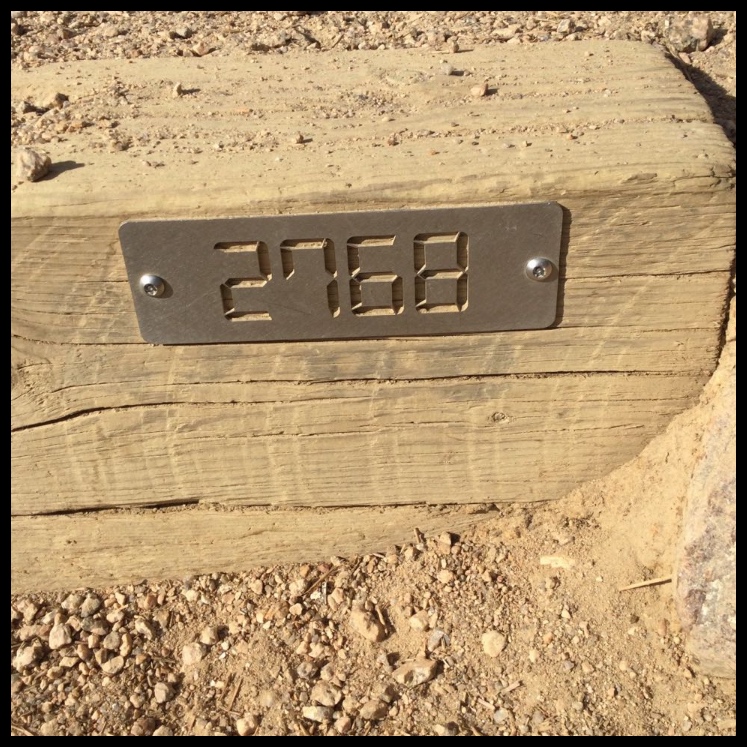 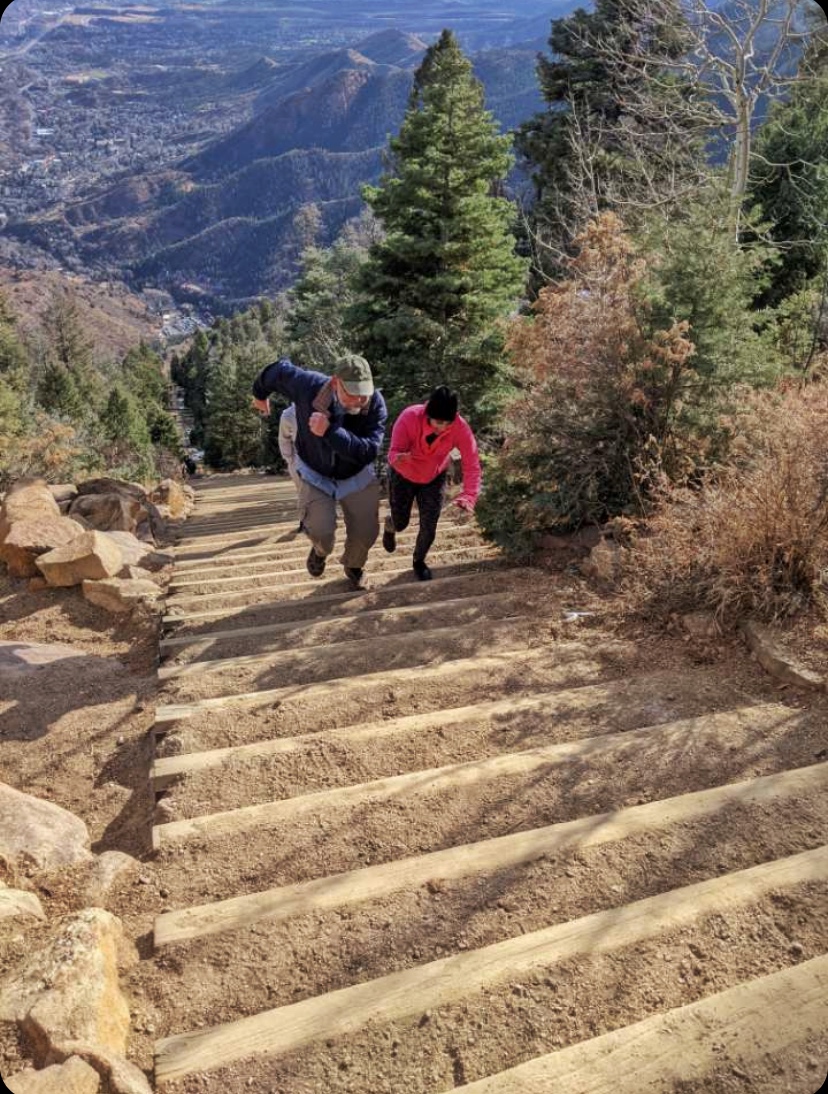 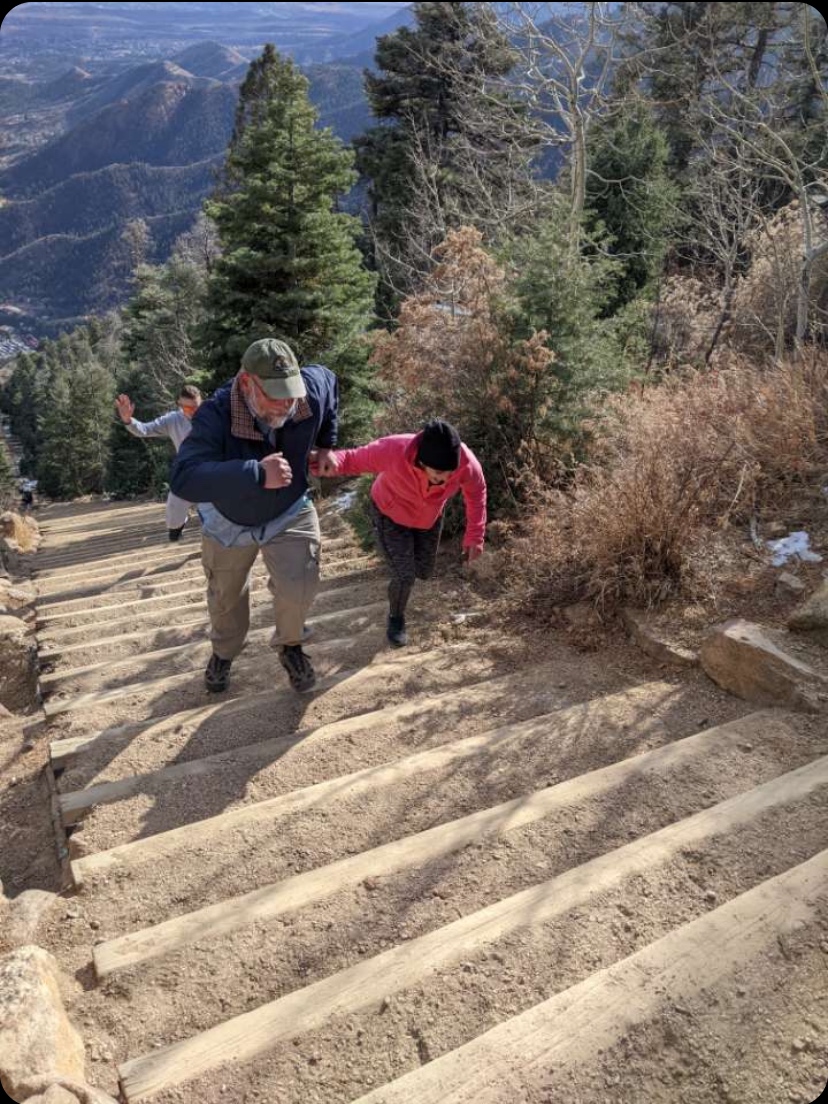 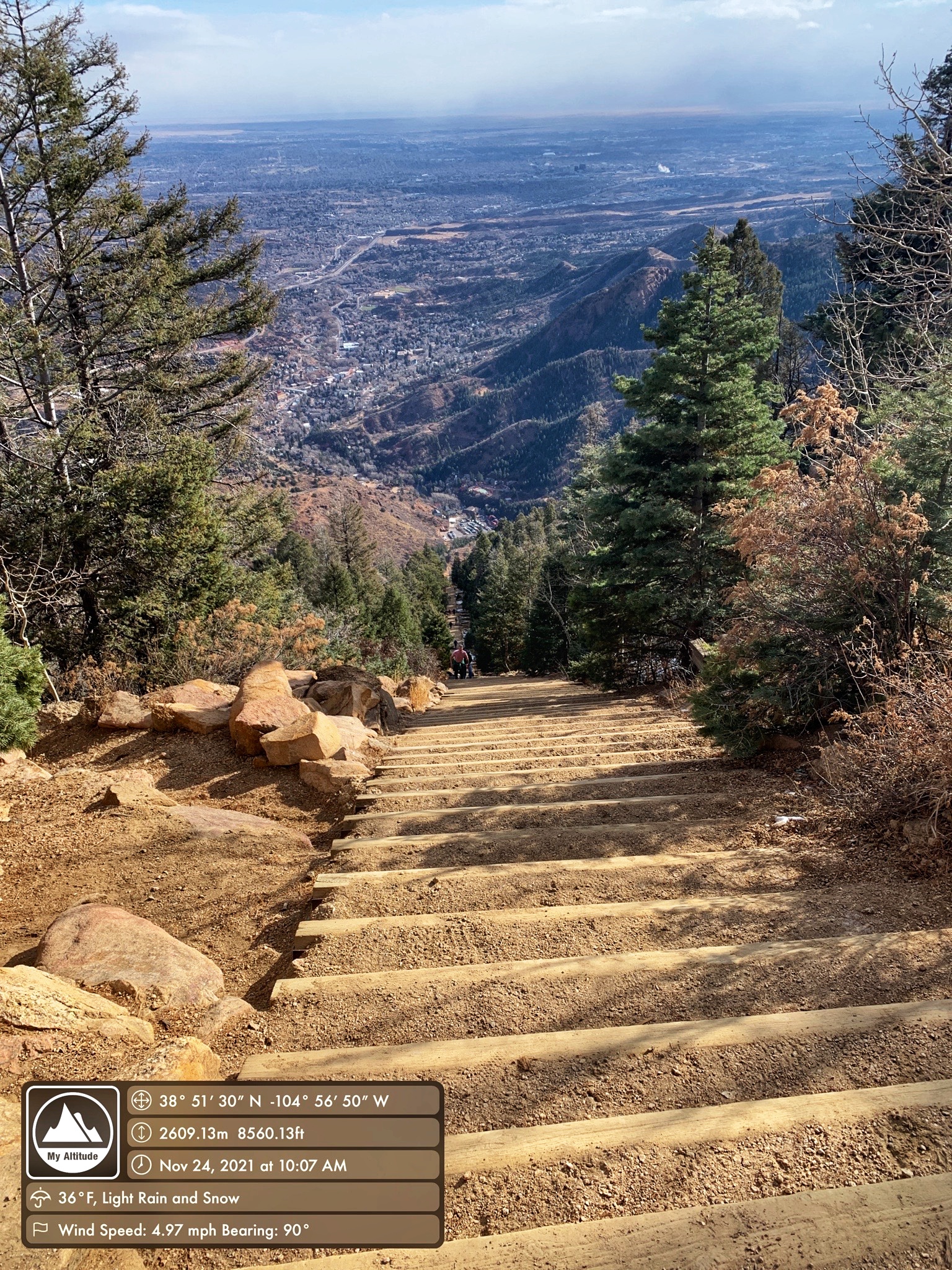 We descended on Barr Trail, a hike of three or four miles, depending on where you look for your information.

I can’t say I enjoyed the climb, and my ascent certainly wasn’t pretty or swift (I’m not even sure if we spent more time climbing or resting), but I’m glad I did it—once.

I took this shot on the way down. 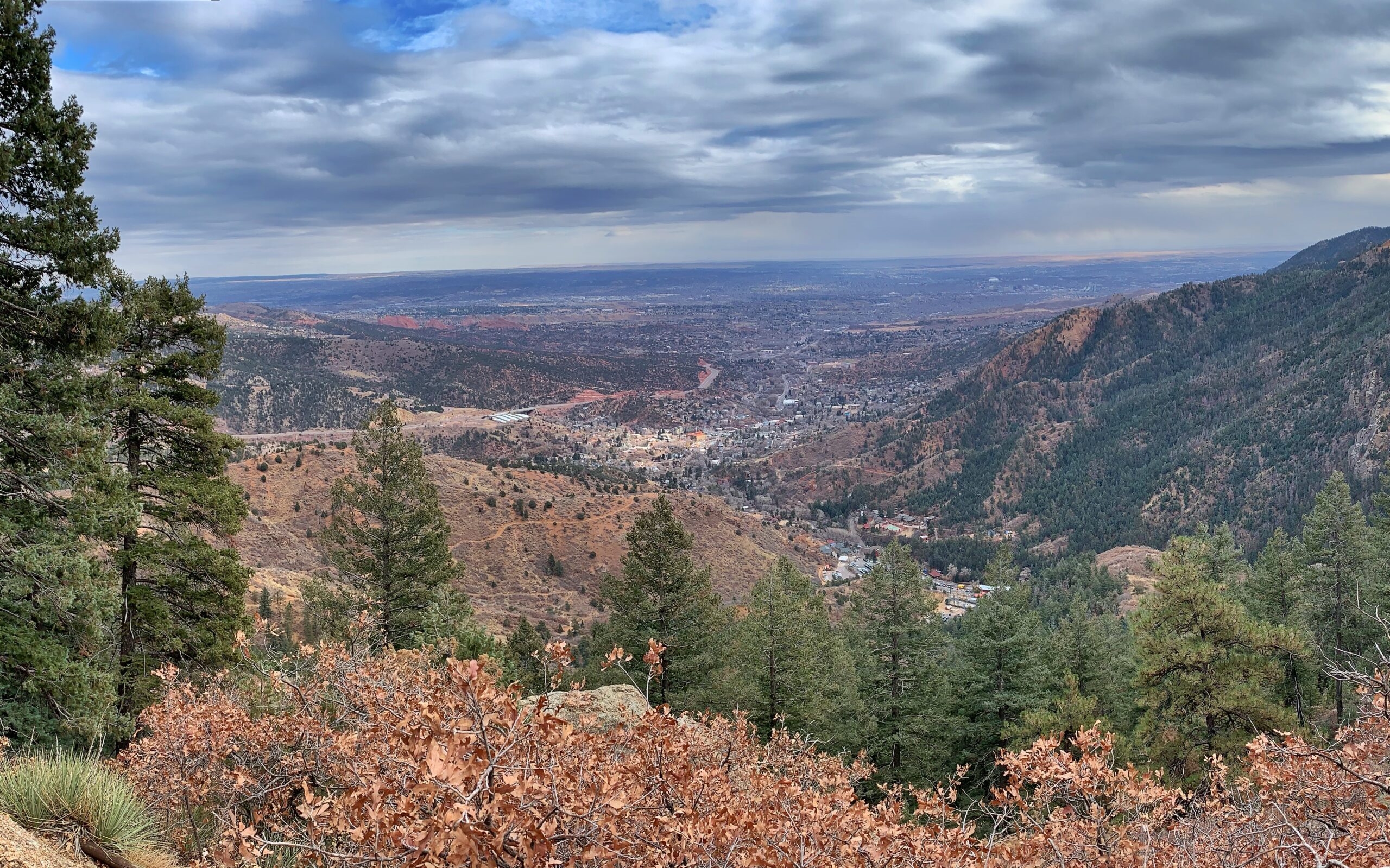