We made the pilgrimage to Kentucky to visit Answer in Genesis’ Ark Encounter attraction. We arrived at noon, just as it was opening, on a warm summer afternoon. With parking, it cost us a cool $102 to get in. We rode the shuttle bus for a mile or so to the ark. 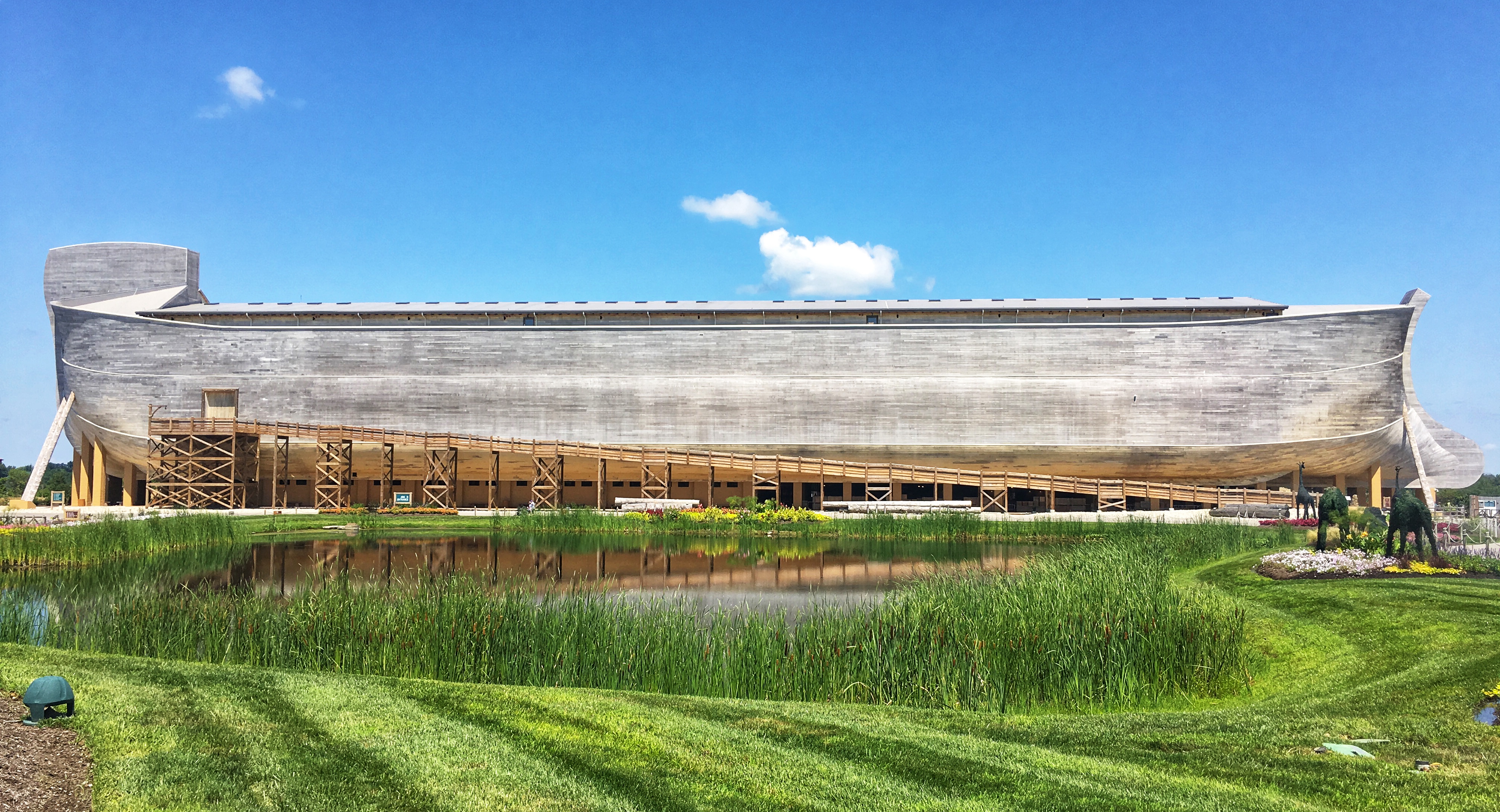 Because we were early, we were able to skip the acre or so of cattle gates set up for crowd control.

The entrance was up a ramp under the stern. The first display was a explanation of “creative license.” The took everything they could from Scripture and stuck to it rigorously, then speculated on the rest to enhance the visitors’ experience. For example, they gave Noah’s wife and daughters-in-law names and personalities. 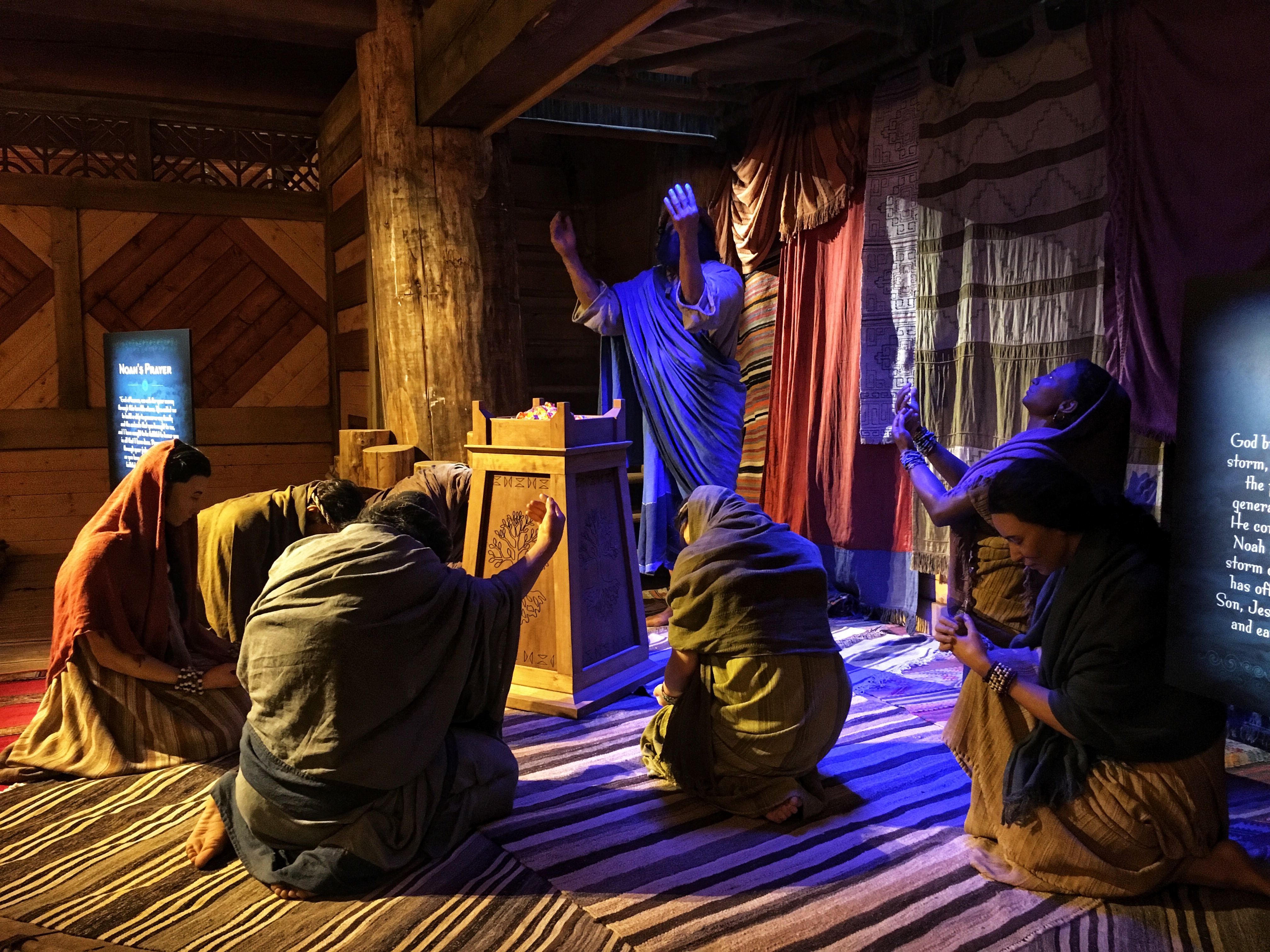 The Bible has nothing to say about how the animals were kept, fed, or watered, so the museum portrayed what might have been based on what can be known of technology and building techniques from that time—which isn’t much since everything except the ark was destroyed in the flood. 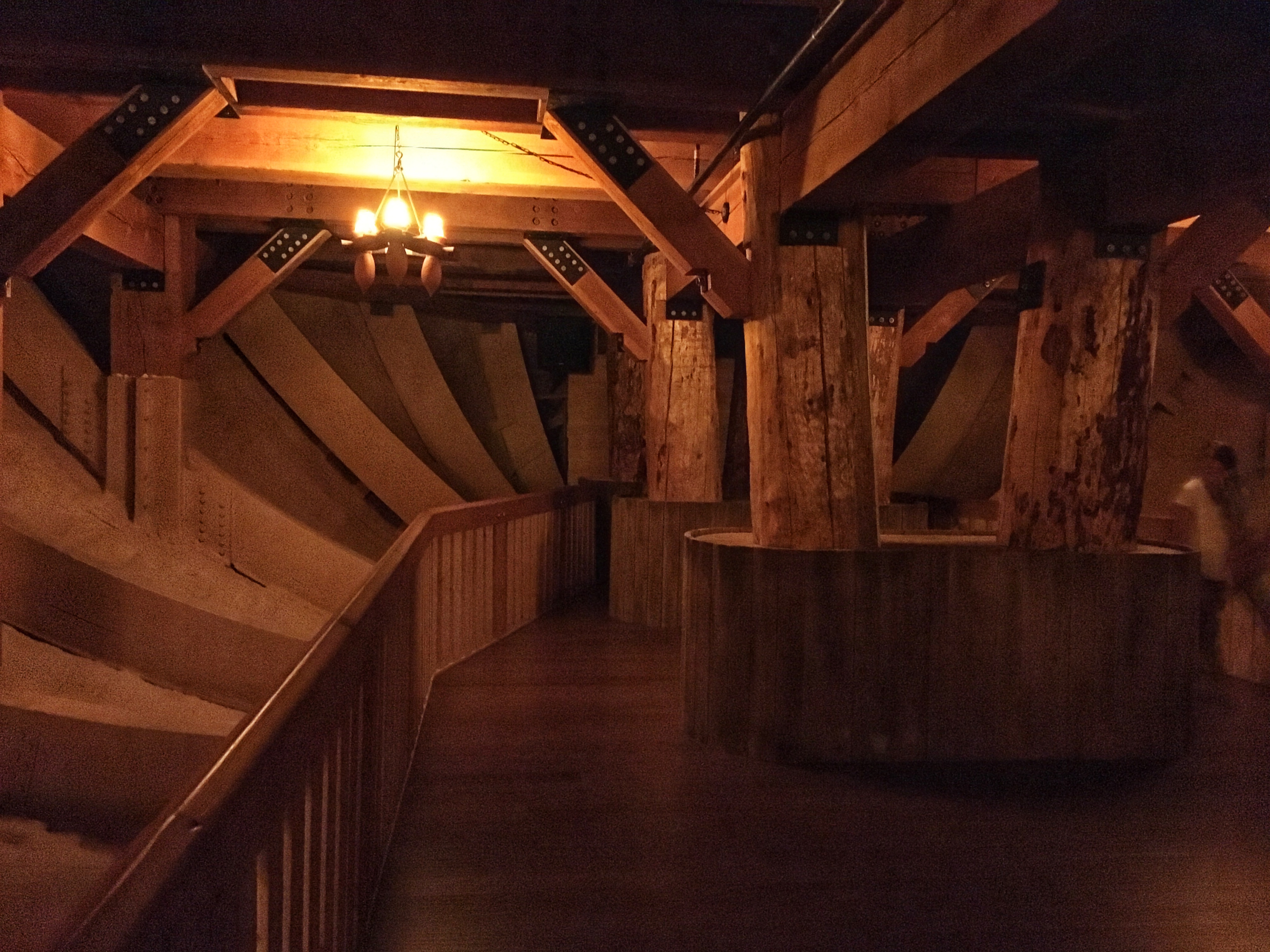 The size is based on the Bible, but the shape is conjecture of a craft that would ride the waves without tipping. Much of the space on the lower deck was taken up by bird cages, bags of food and jugs of water—except that we couldn’t see in the cages, bags, or jugs. 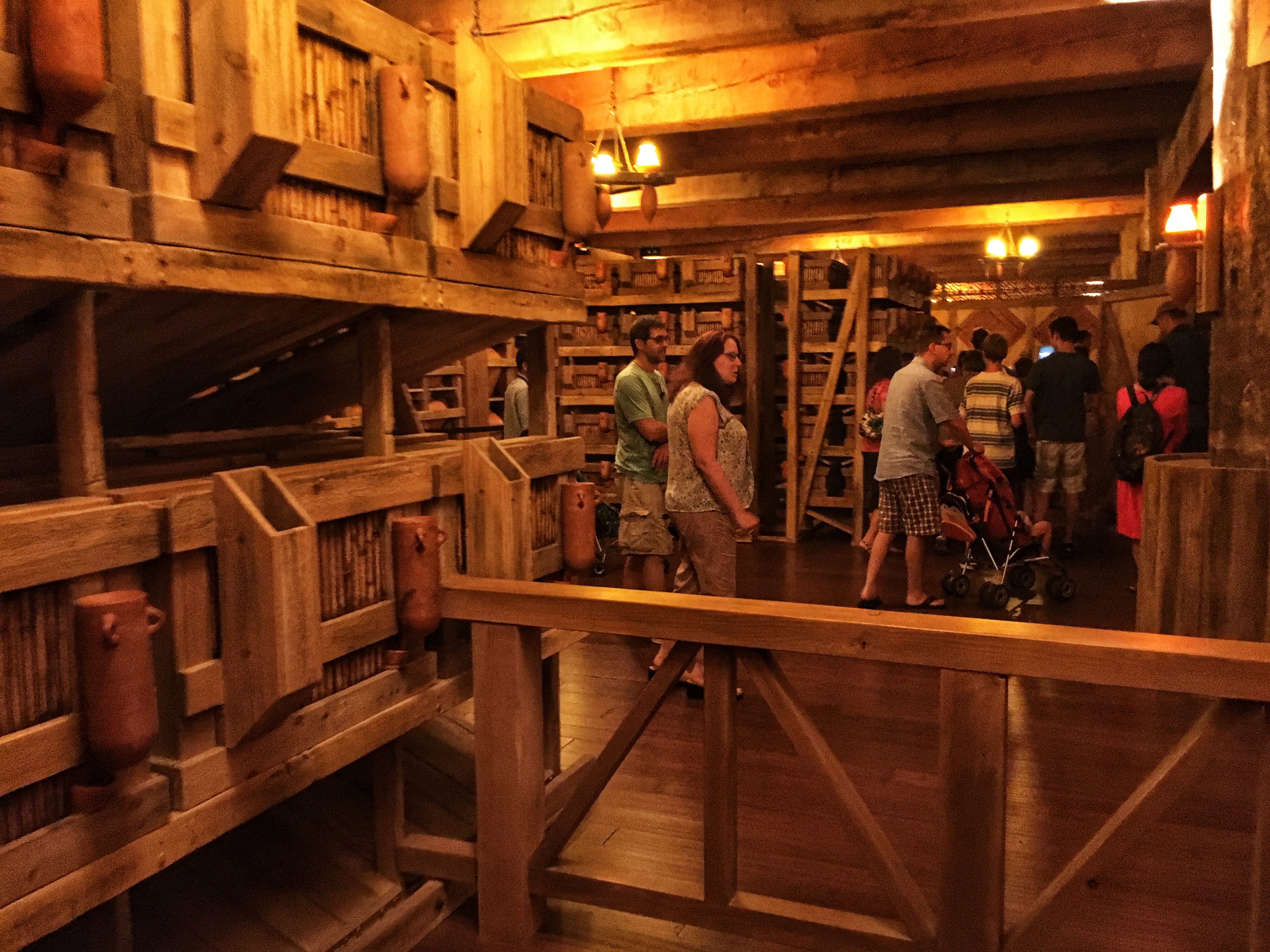 Here’s an example of how the animals might have been kept. The reptile pots had chutes to get crickets and water inside. 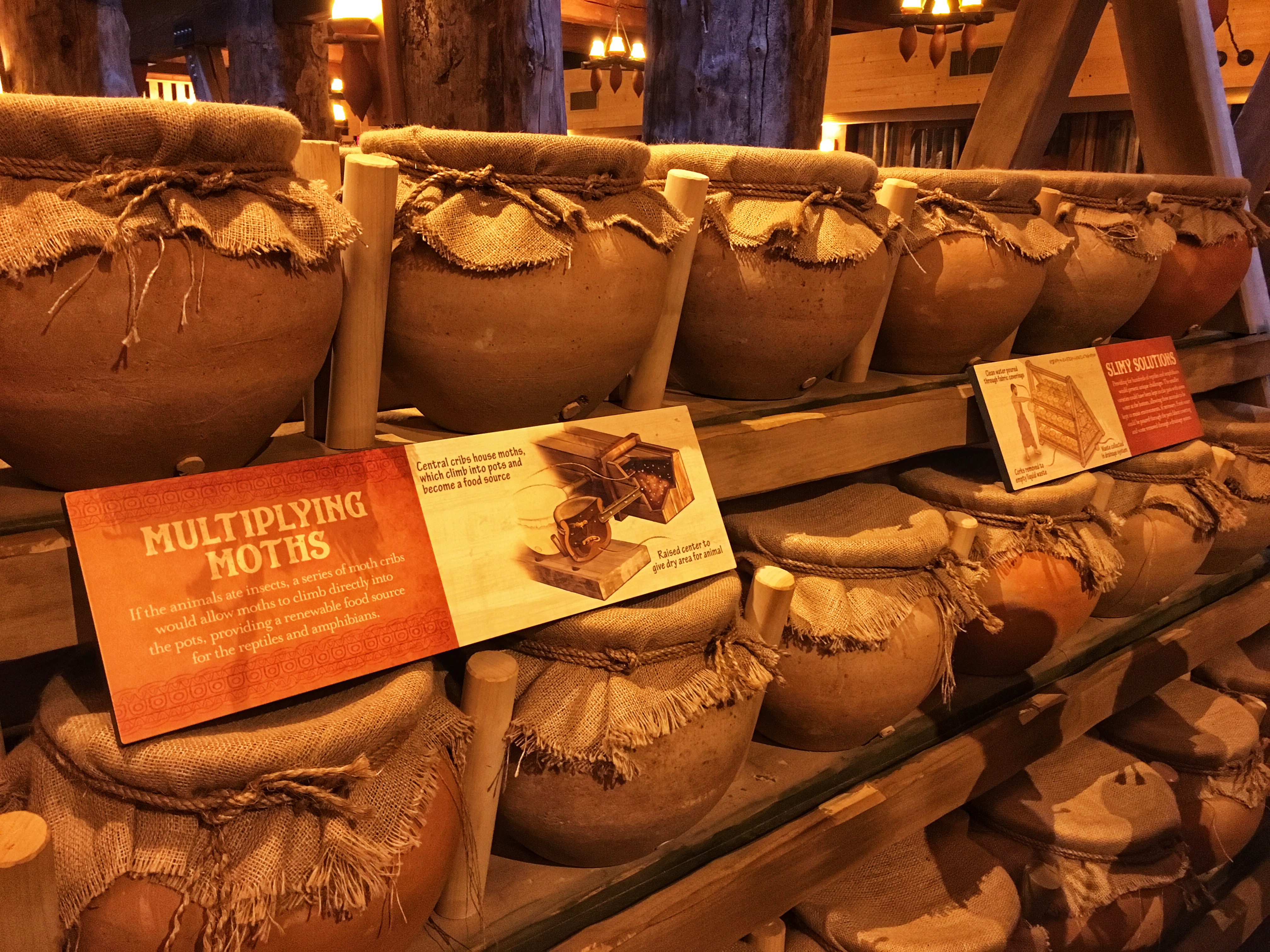 The air conditioning wasn’t quite doing its job, so we stopped at a snack bar for drinks. I was happy to find Diet Pepsi on the ark. I’m sure that’s straight from Scripture. 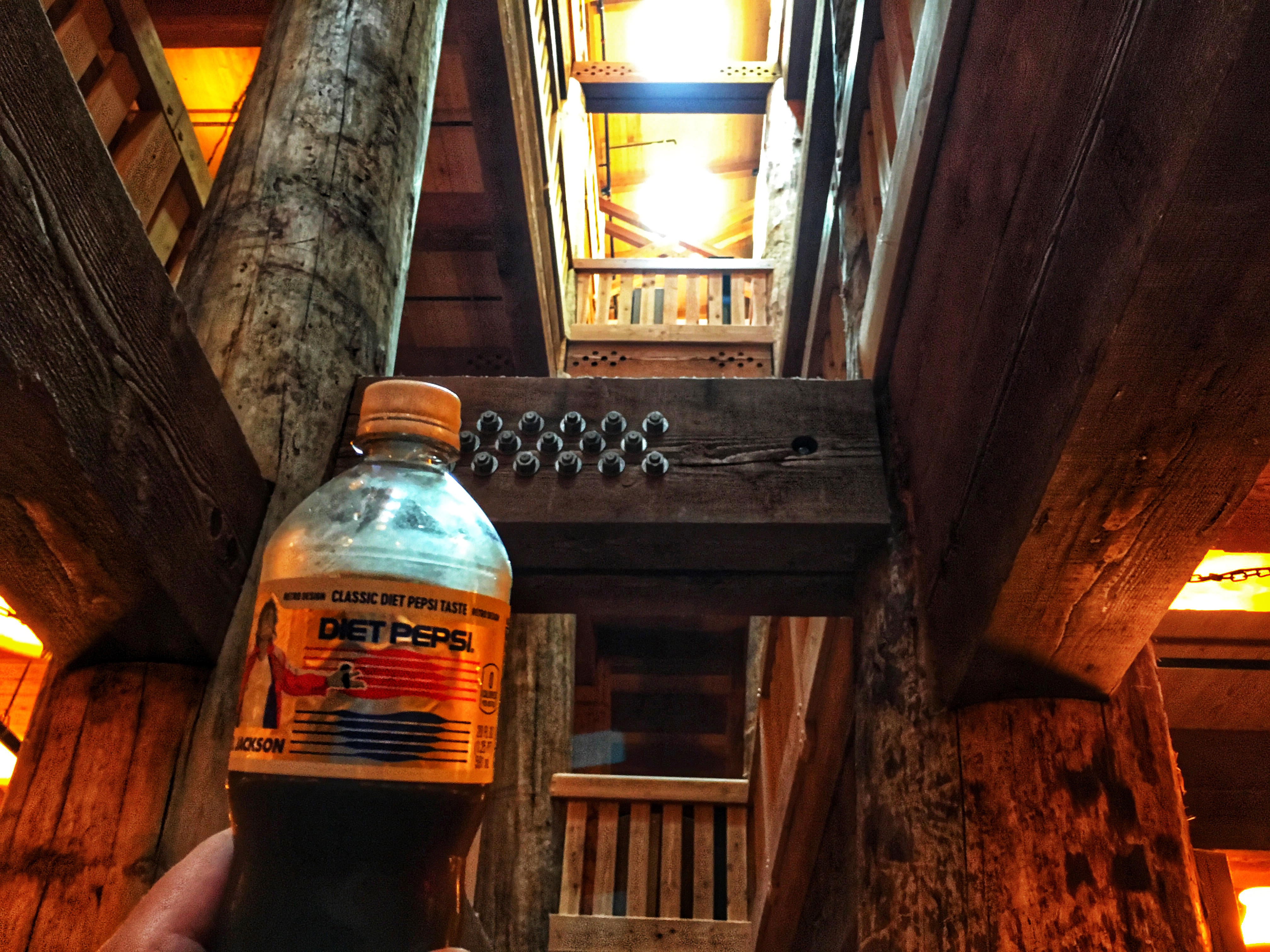 There were museum-type displays on the middle level, including this diorama of the sinful state of the world before the flood. 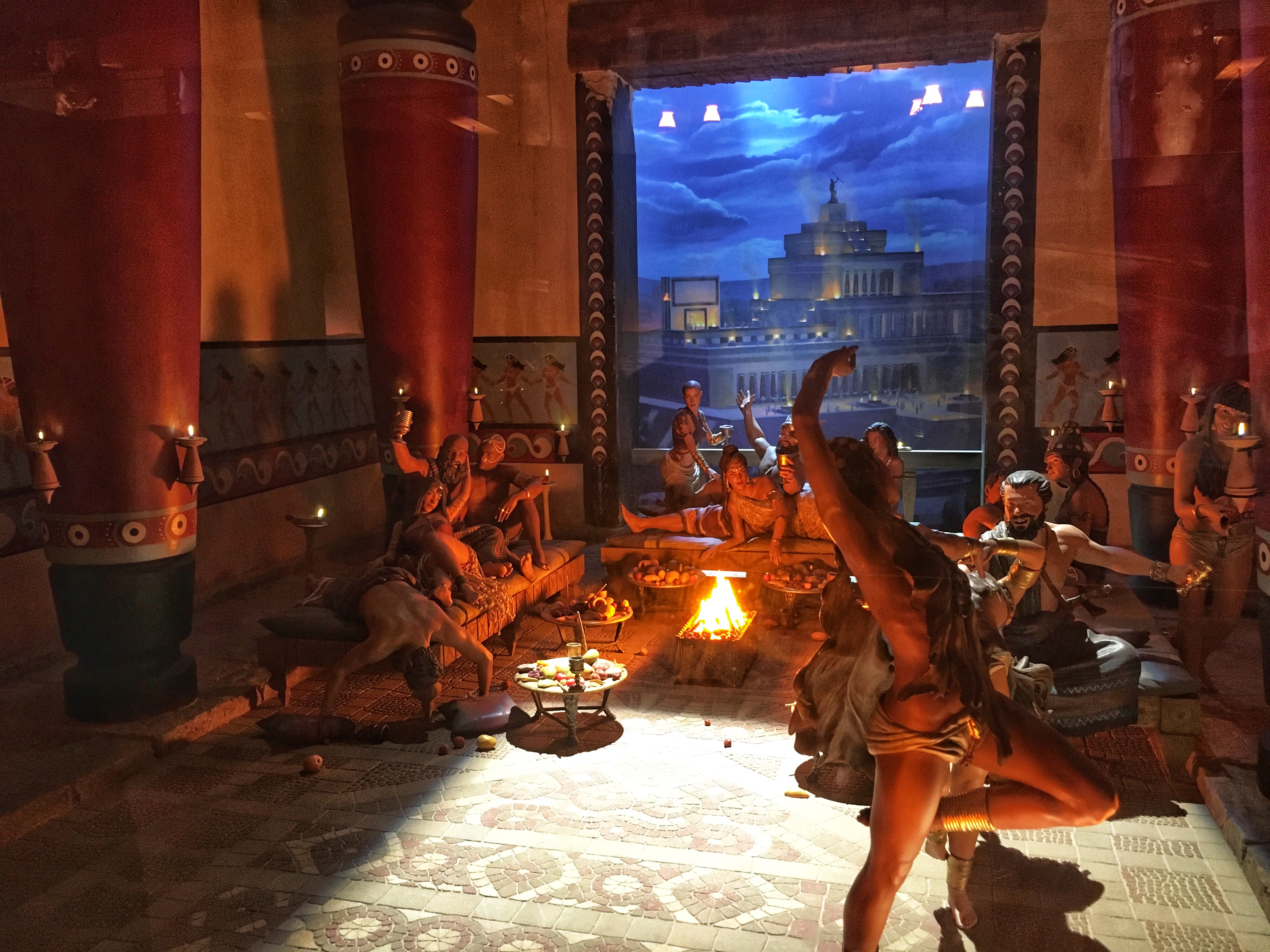 Most of the animal cages were on this floor too. AIG’s premise, and I think it makes sense, is that every species didn’t need to be on the ark, just every kind. So there were two of the cat kind, two of the dog kind, etc. They included extinct kinds, like dinosaurs and extinct forms of kinds that are still around—like short-necked giraffes that they’ve found in the fossil record—if that form was smaller and more likely to do well on the ark. 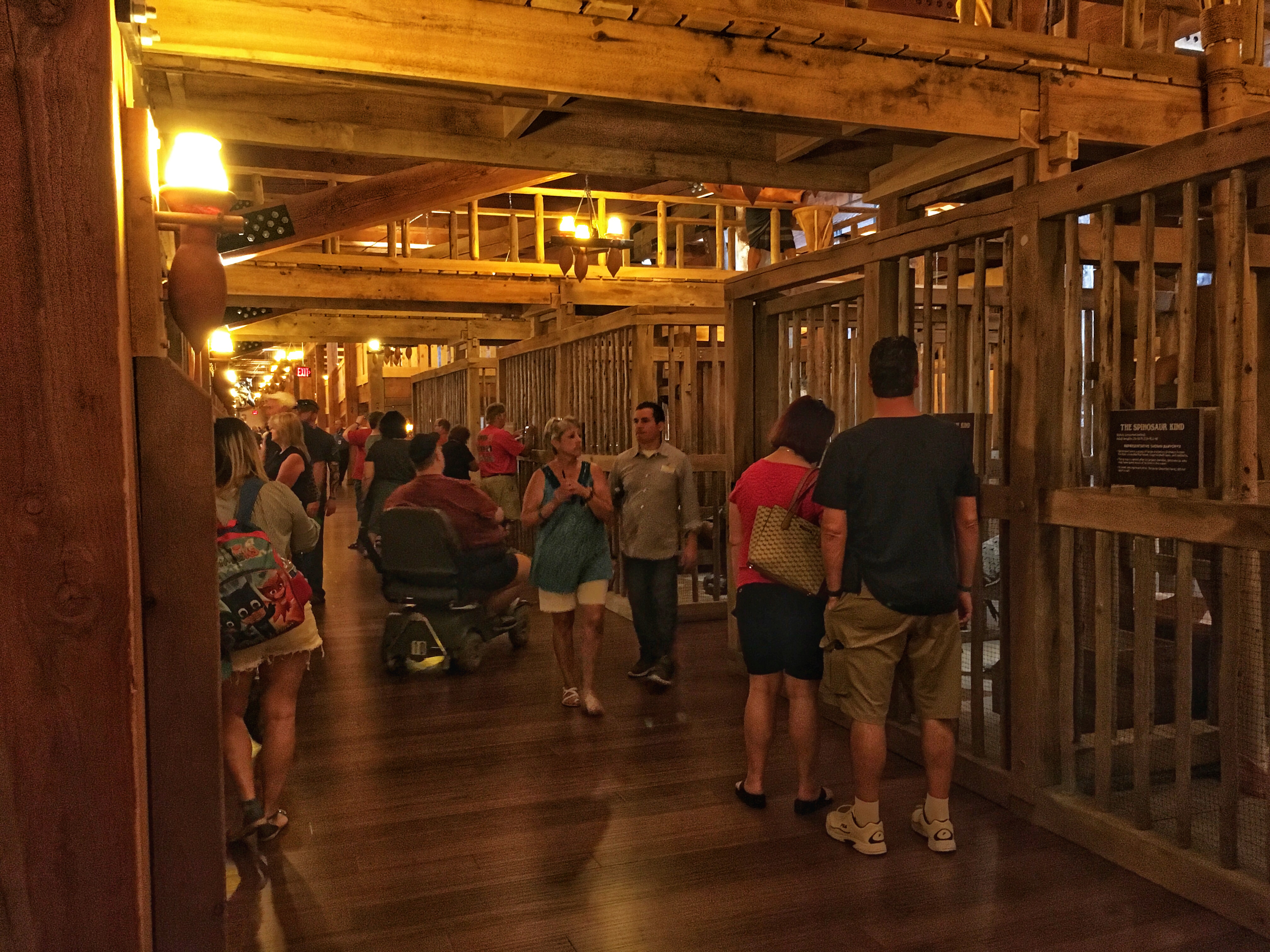 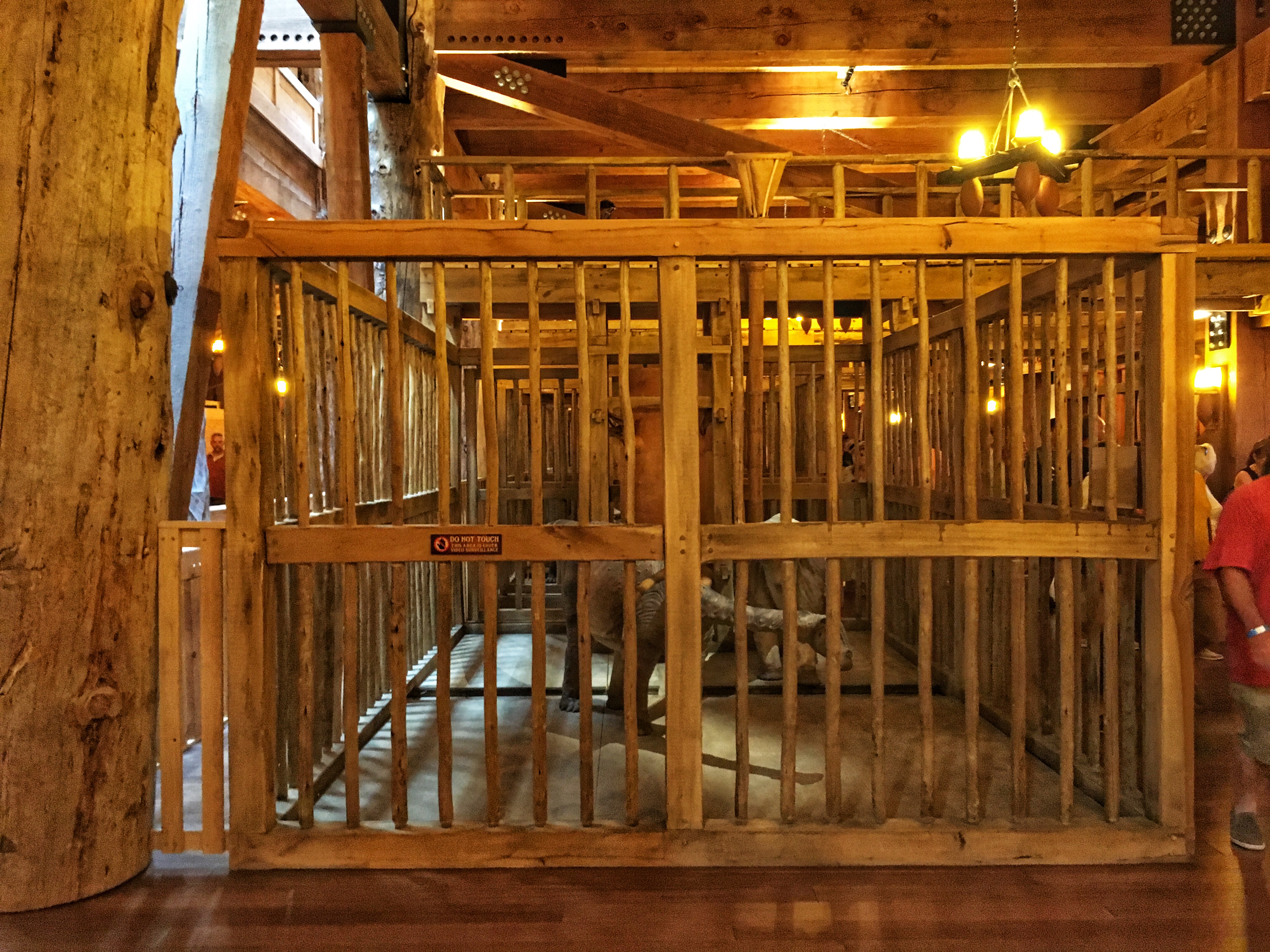 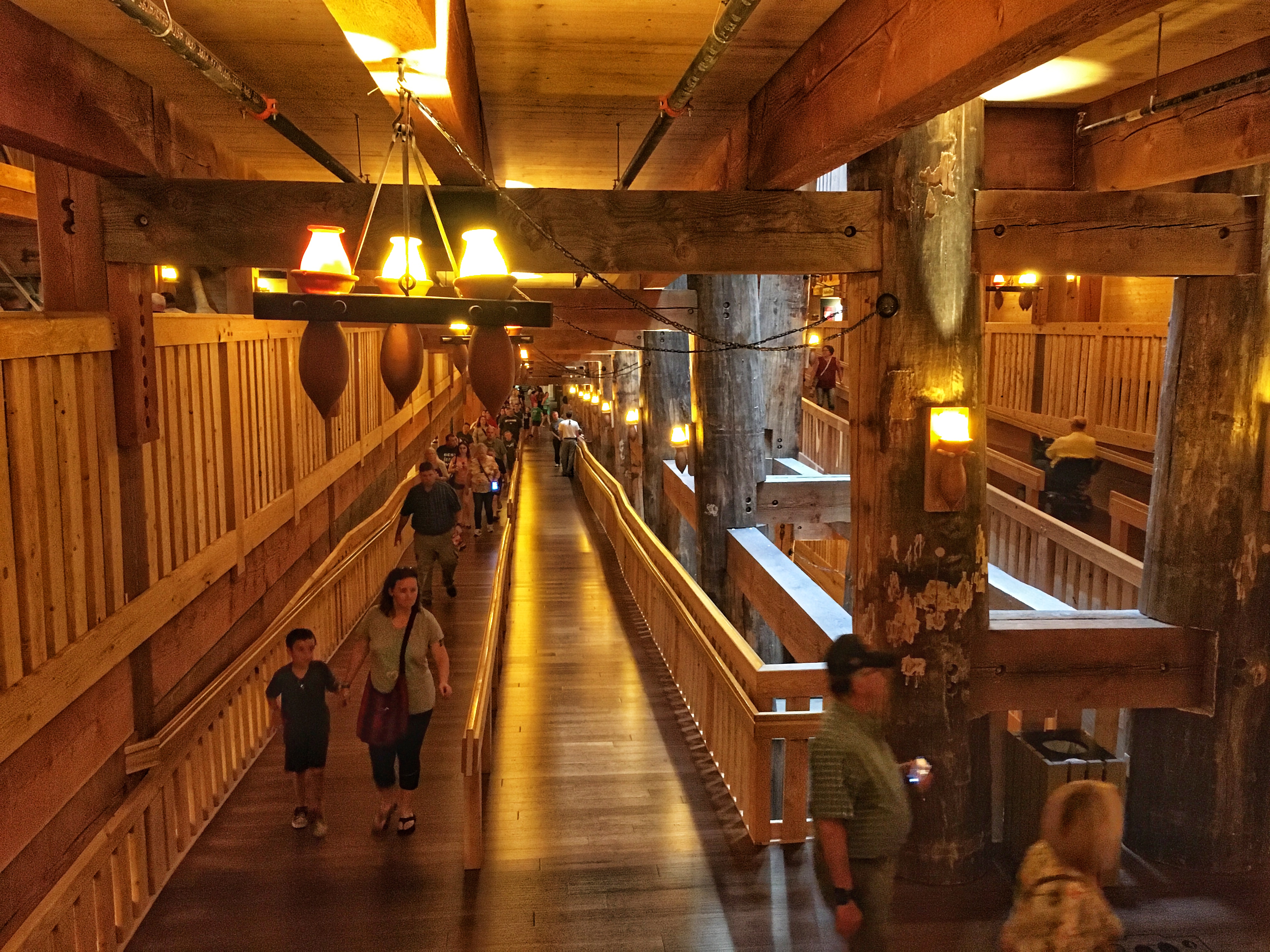 There were work areas on the middle deck—Noah’s library, the carpentry shop, the blacksmith shop. 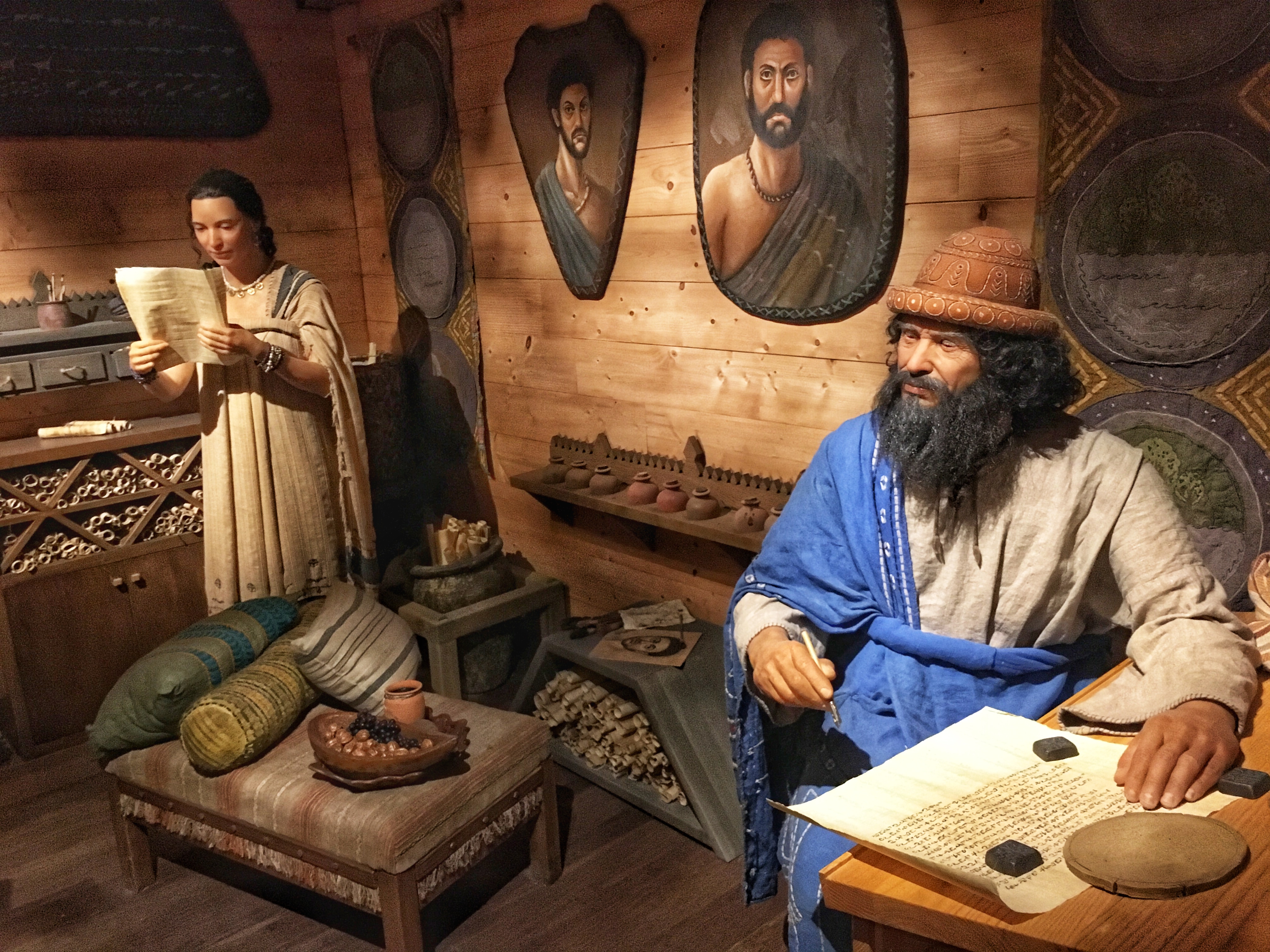 The Fairy Tale Ark gave examples of all the ways children’s books have misinformed and trivialized the biblical record. 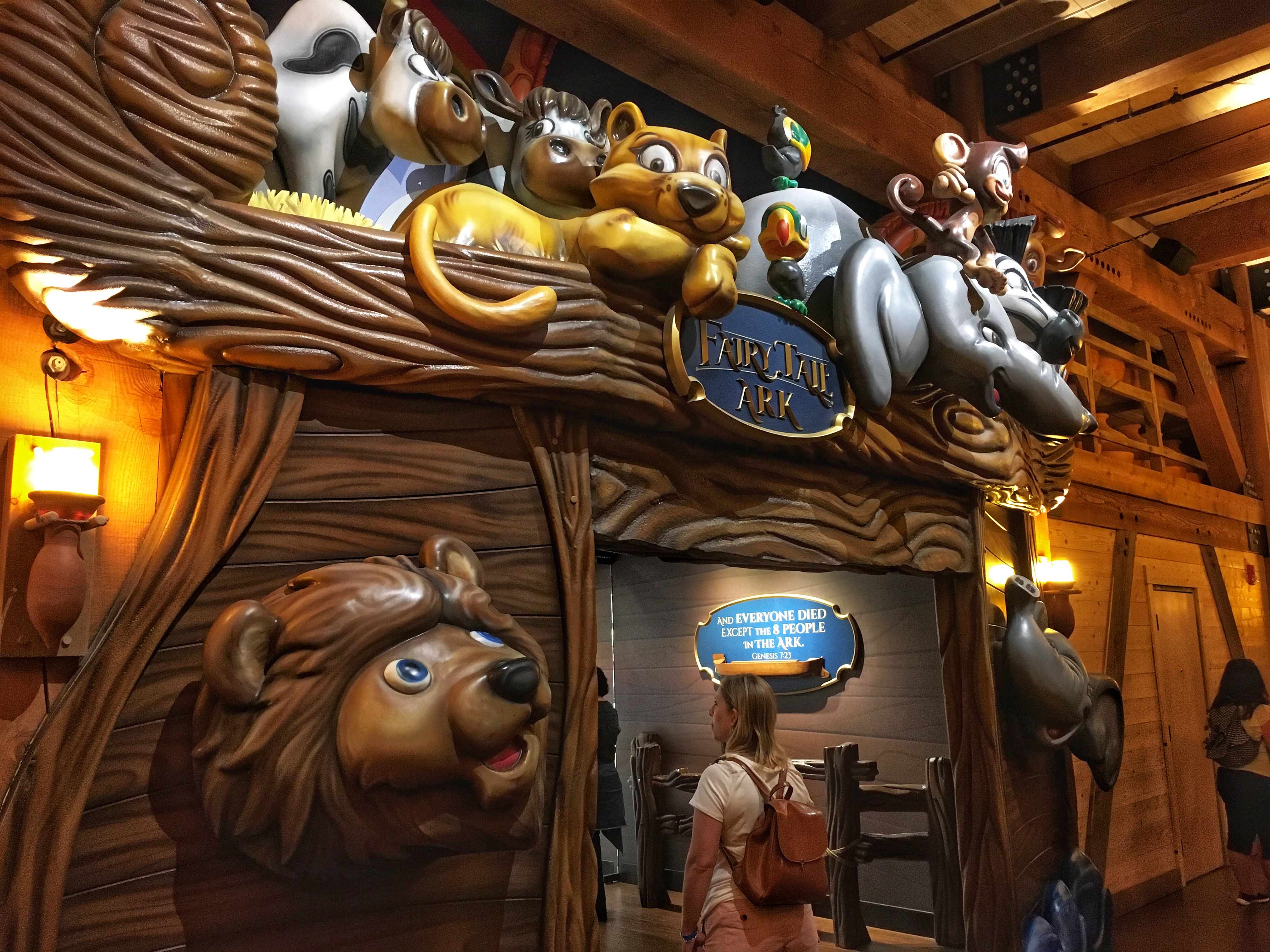 The only live animals inside were a couple of alpacas next to a gift shop. 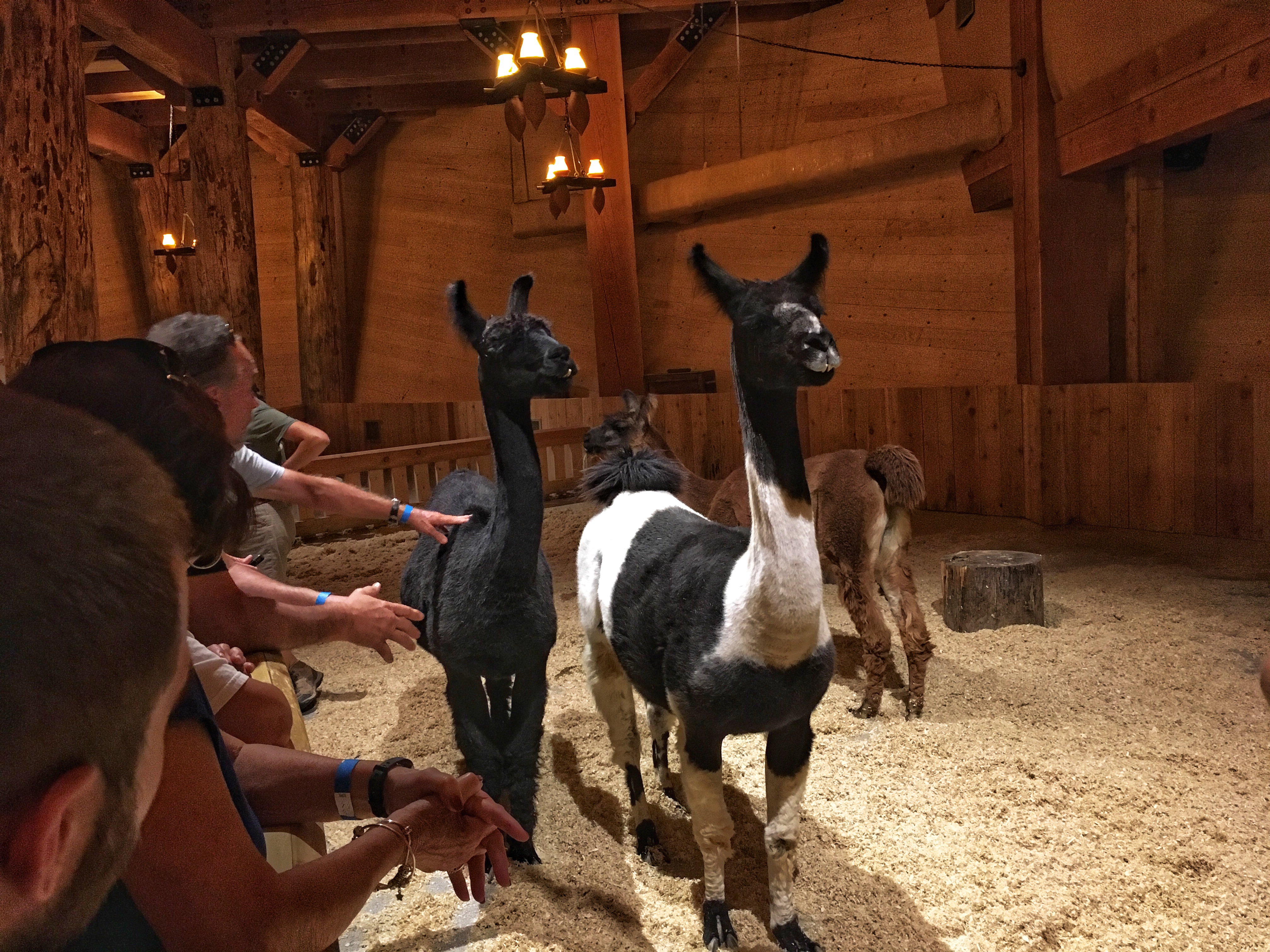 The top deck had more cages and the living quarters on one side and more museum displays on the other. 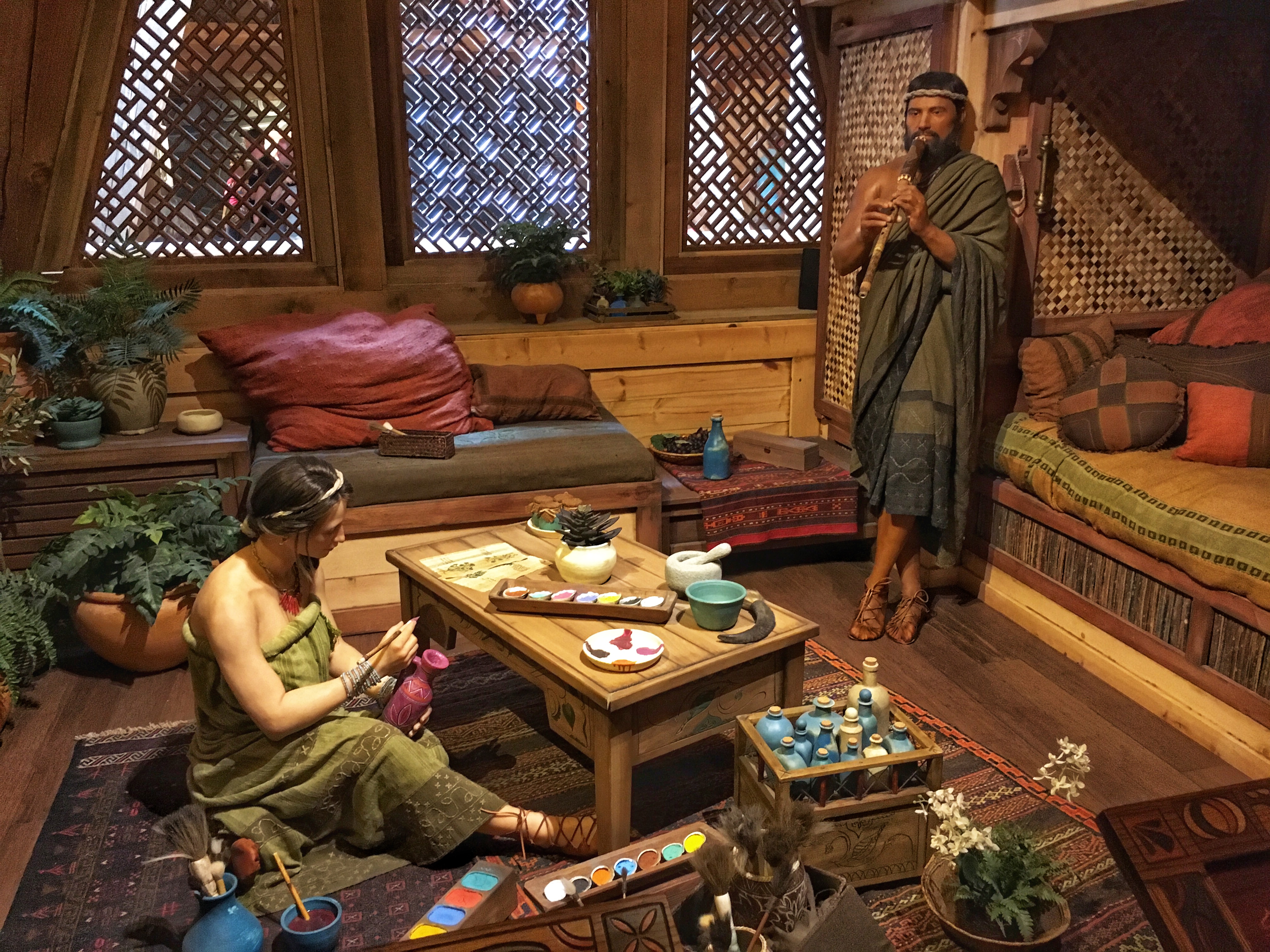 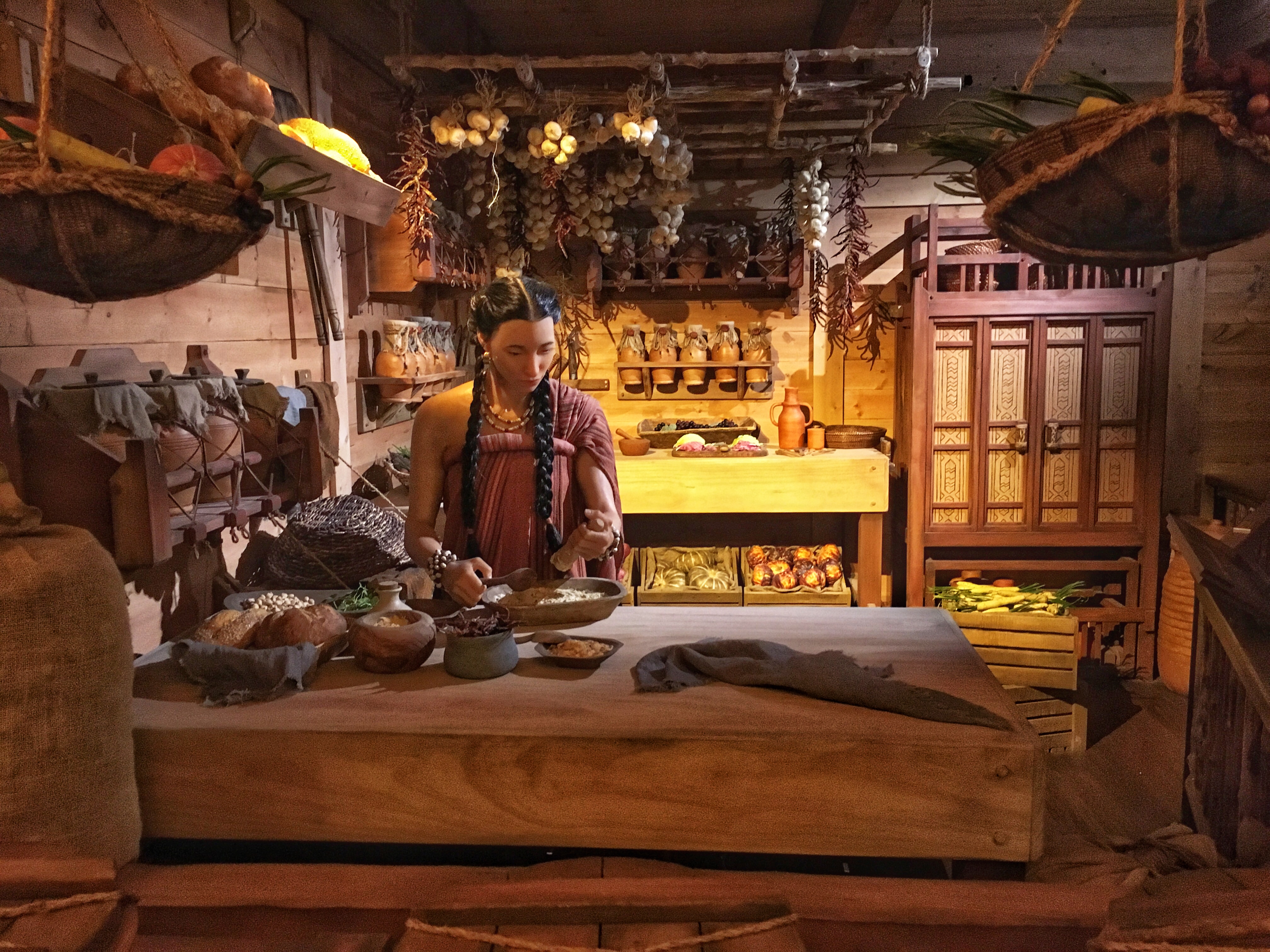 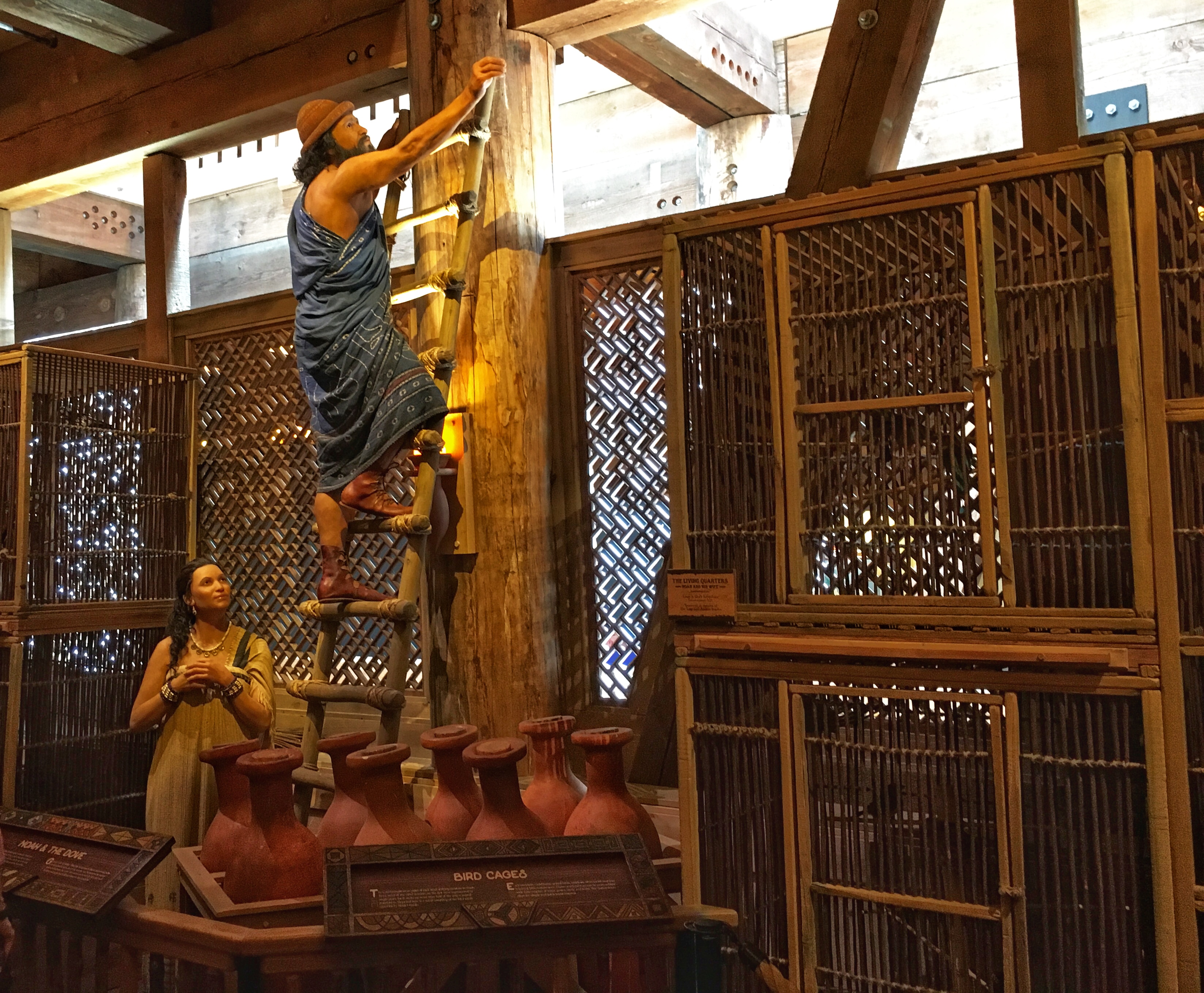 They had displays on the geological evidence for the flood, flood myths in other cultures, and such like. The final section was a presentation of the gospel on comic-book-style panels on the walls. 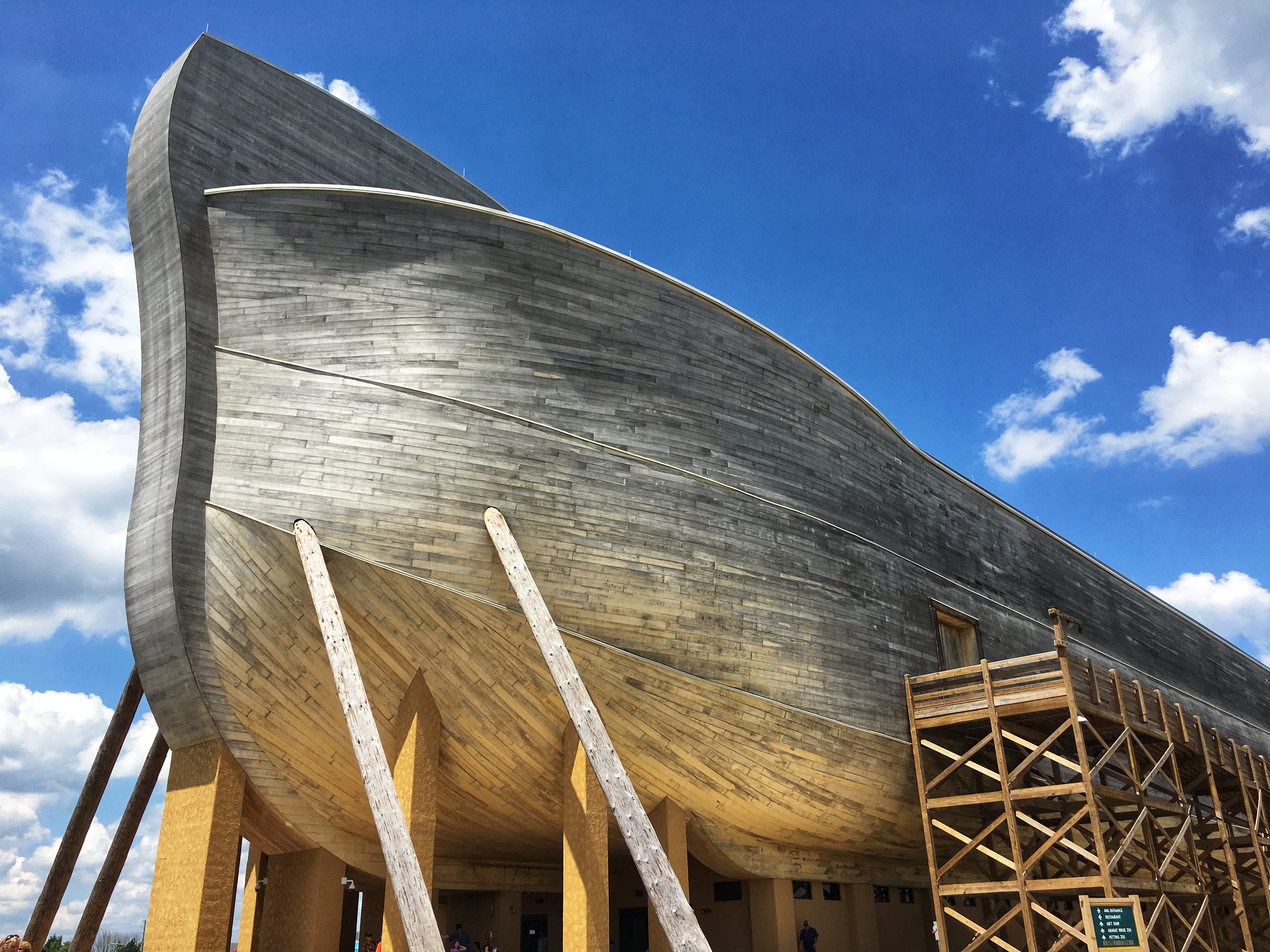 Since we were right there, we ate lunch in the buffet in the park. The food wasn’t bad for a buffet. 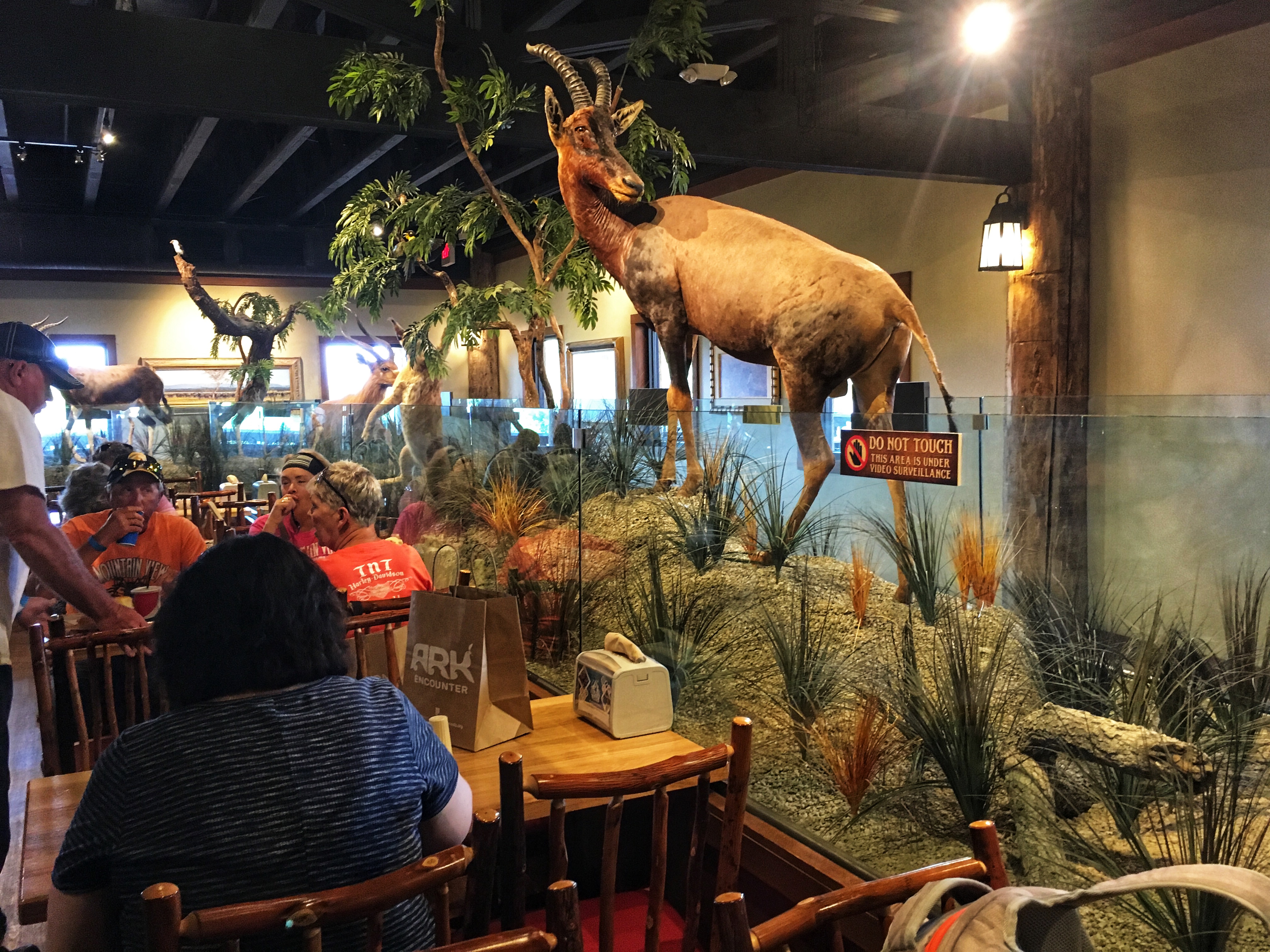 We walked through the small zoo, but it was hot and sunny. We skipped the camel ride and the zip line. 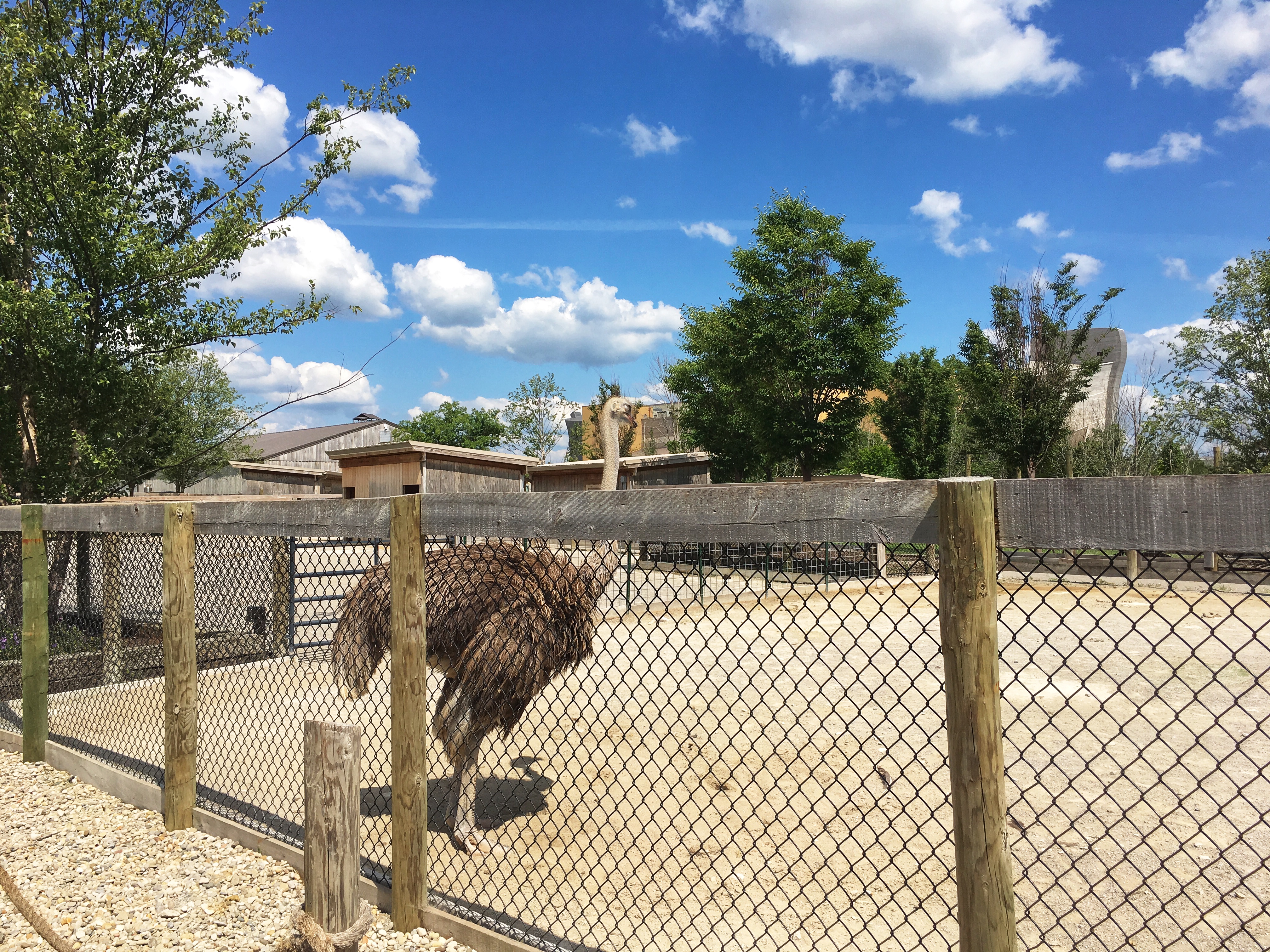 Was it worth it? I’m not sorry we did it once. I didn’t learn a lot new, but it was cool to see it life-size. Answers in Genesis does of good job of showing that there are valid reasons for intelligent people to believe the Bible account, even if things weren’t quite the way they picture them. It was expensive, which doesn’t make it very accessible for people with a lot of kids or not a lot of money.