For lunch on Monday, we stopped at Skyline Chili. Cincinnati chili is one of those things (like Monty Python and the Holy Grail) about which nobody is ambivalent. People either love it or hate it. We love it.

For dessert, we drove to Henry’s Diner in West Jefferson, Ohio. I found out about this place on roadfood.com, which said the pie was amazing. It also said the outside looked like a dive. So I was prepared for an unassuming setting.

I wasn’t adequately prepared. This place didn’t just look like a dive. It looked abandoned. It looked derelict. It looked like a place where weird murders were likely to occur. 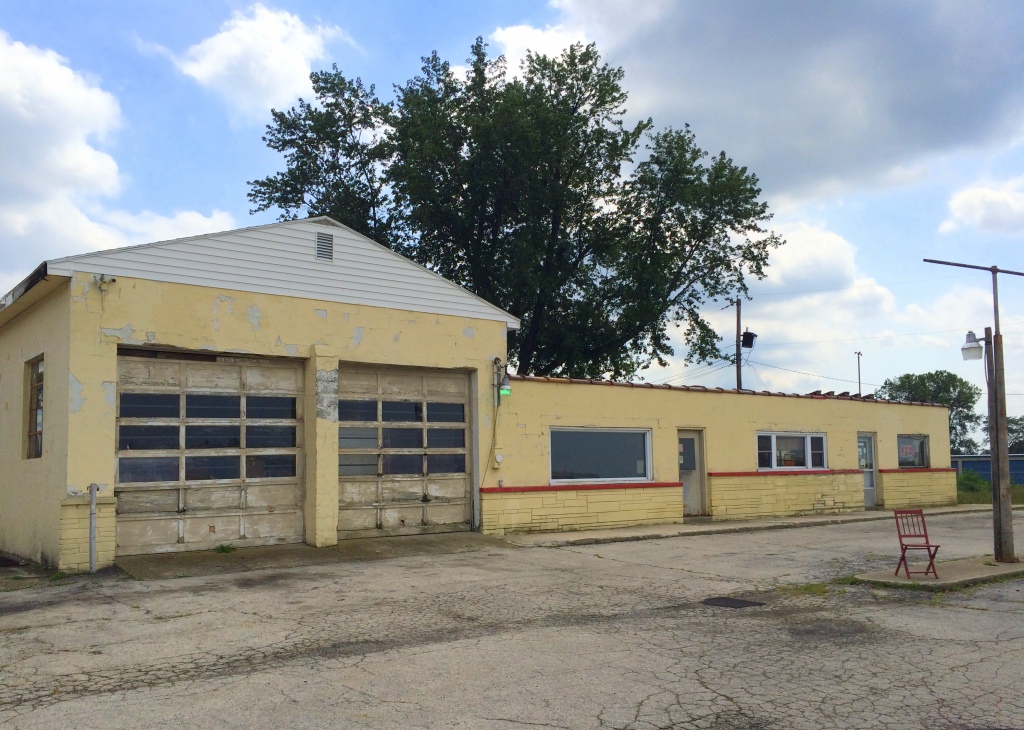 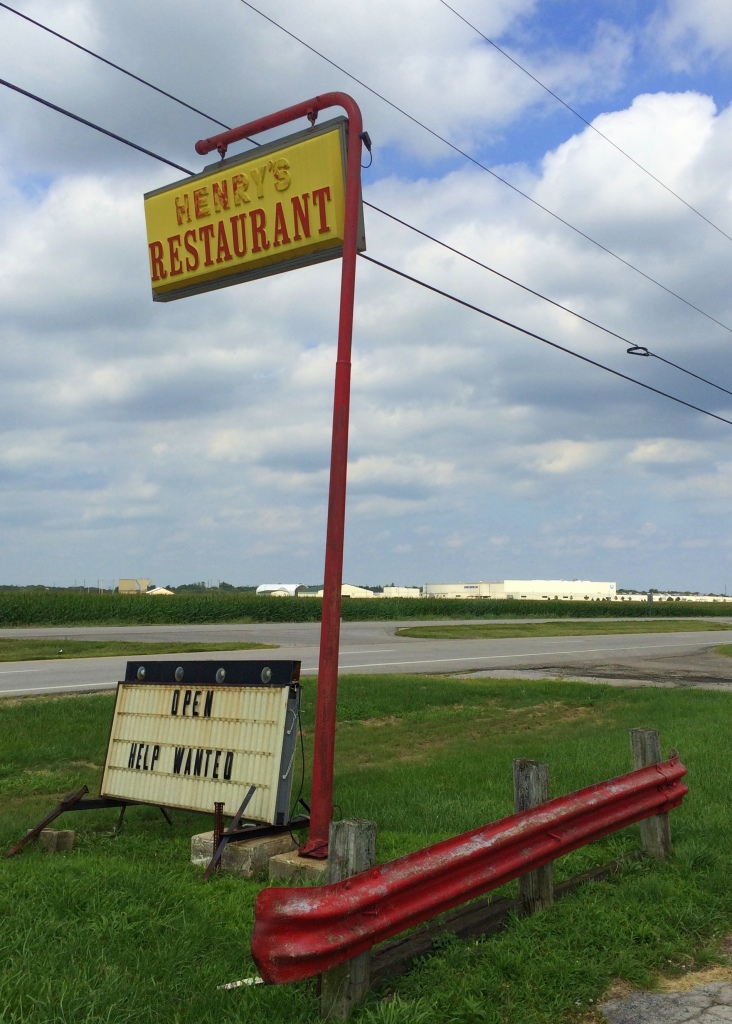 I’m not sure I would have had the courage to visit after dark. The reviews said it looked better on the inside, and I supposed that is accurate. “Better” was the only direction available. but that’s not to say it looked nice. 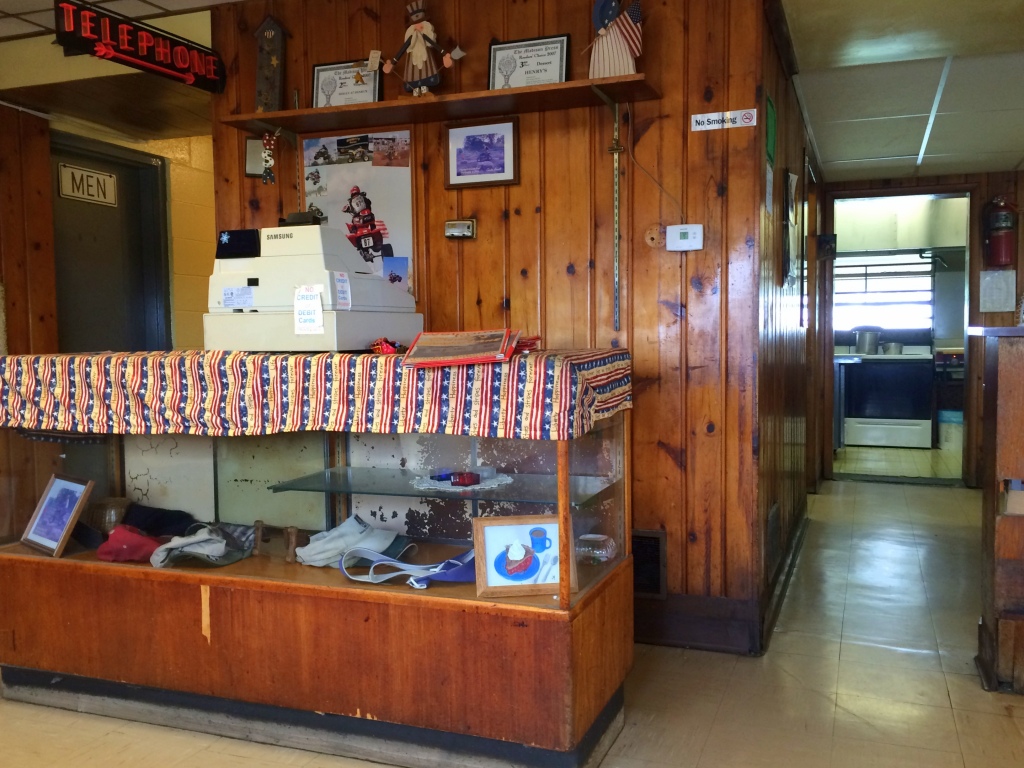 A scrawny woman with black and crooked teeth but a very pleasant personality came by to take our order. I asked about the pie and she informed us that the five people who were leaving as we entered had ordered two pieces each, so the remaining options were somewhat limited. I ordered the final piece of lemon meringue and my wife ordered blackberry. I also asked about the cherry juice. The waitress shook her head and said, “I wouldn’t drink it.”

While waiting for our pie, we had a chance to look around. It wasn’t particularly clean or kept up. The area behind the counter looked neglected, the case under the register was cluttered with junk and the edges were dusty. The pie wasn’t bad, but the ambiance was so hard to ignore that we couldn’t really enjoy it. Given the opportunity to return, we would skip it.

The bathrooms were the final straw. They were filthy and malfunctioning. I forget all my wife said about the women’s. The sopping wet newspaper under the urinal in the men’s was unpleasant.

We escaped and headed northwest across rural Ohio.

On our way through the small town of Mutual, I spotted an interesting rock stack along the road. 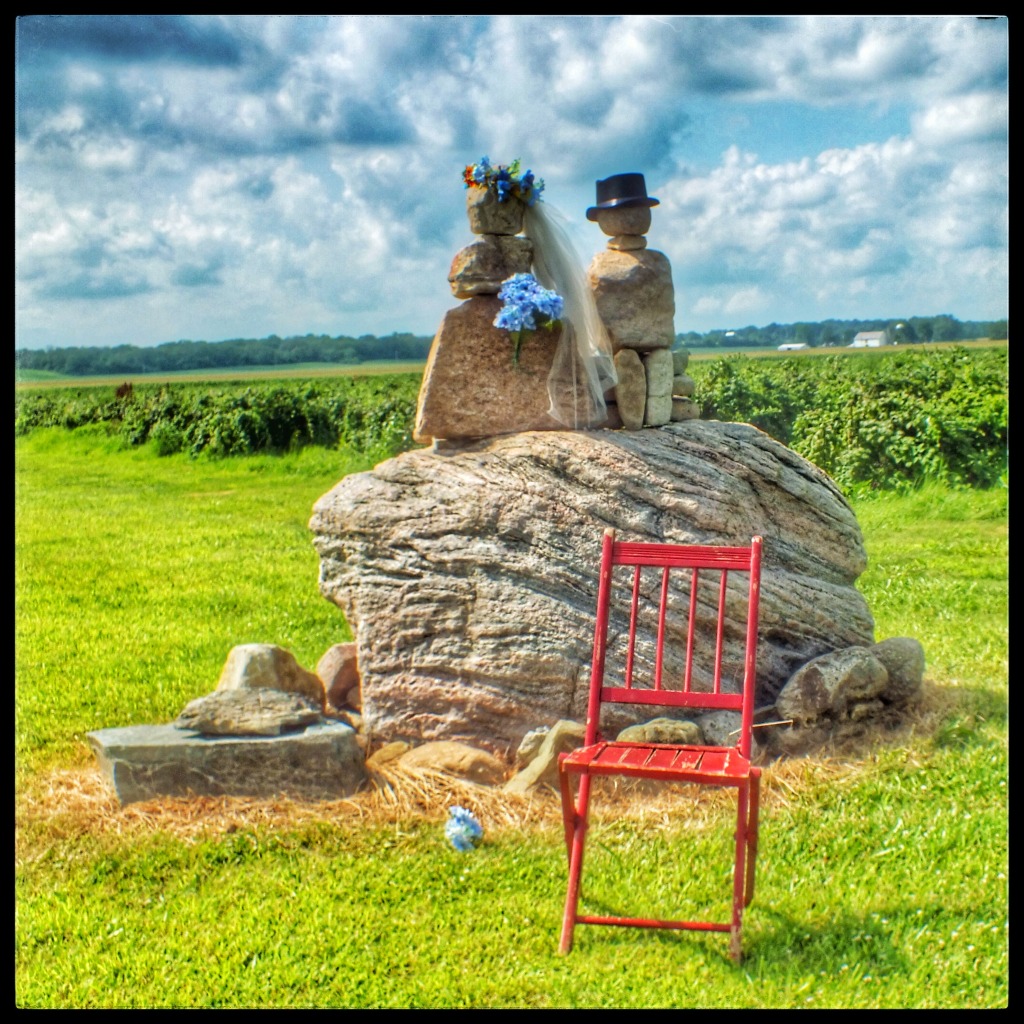 I read about this on the Internet but didn’t think it worth a special trip. But since we were right there, I made a quick U-Turn, parked in a nearby cemetery and walked over for a photo. Whoever created this changes it from time to time. It’s been the Iwo Jima monument and a nativity scene in the past.

Our trip took us through Fort Recovery, Ohio and into Portland, Indiana. We stayed at a Holiday Inn Express. I was surprised to find a hotel that nice in a town that small, and when we got there, I was even more surprised to discover how clean and neat it was.

It was still fairly early in the evening. We stopped by Arby’s to buy a salad, but I’d had my fill of small town food. I made a dash into Wal-Mart and bought some fruit, a slice of cheese, and some almonds. We ate back in the room.

I did some searching for a place to eat breakfast. (Most of the time, we skip motel breakfasts, even when they’re complimentary. They’re never good.) A local place in downtown Portland got fairly good reviews. It was called the Koffee Kup Diner. 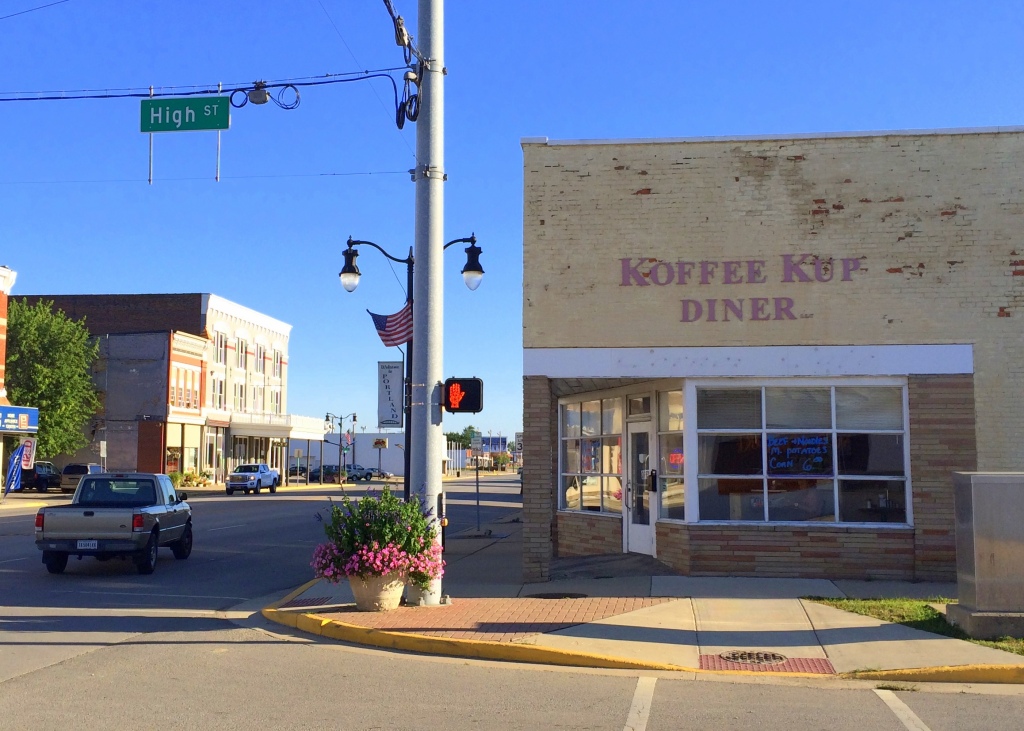 The table in the back was filled with a group of older local men who probably have eaten there every morning for years. We sat in the front and had the rest of the place to ourselves except for a single guy with gray Elvis sideburns who came in shortly before we left. 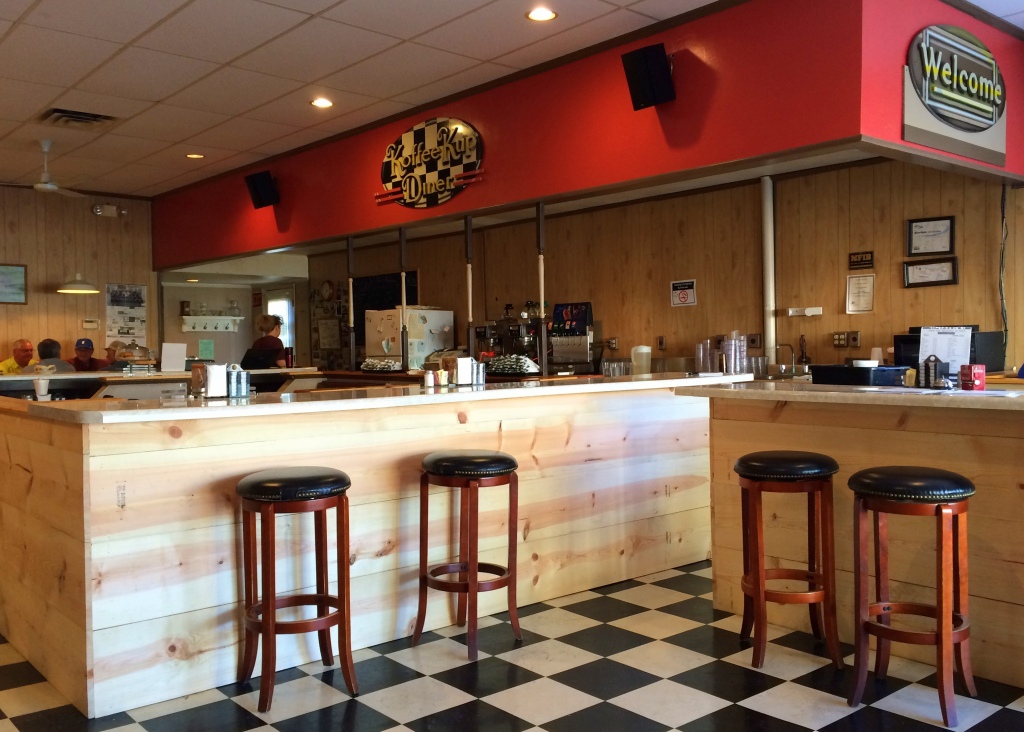 The food was tasty. The decor was pleasant. Unfortunately, it looked like it hadn’t been cleaned in years. It was even worse than Henry’s Diner. The night before, I’d found a review from a year or so ago that mentioned the grubby state of the display case under the register. Nothing had changed. Nothing. 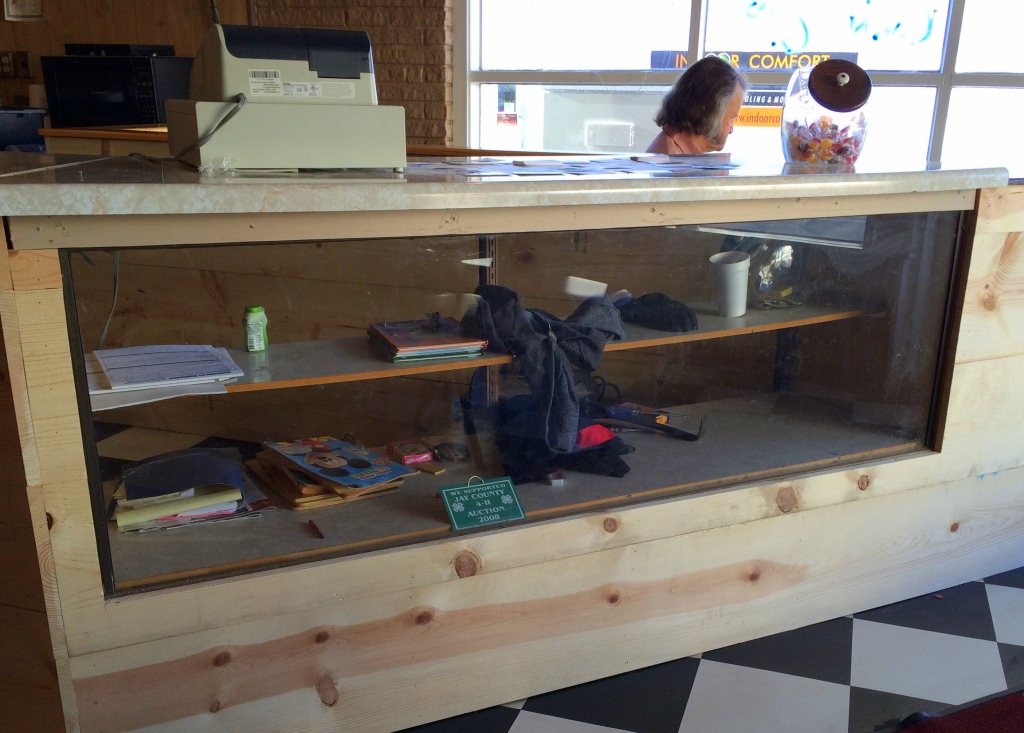 After breakfast, we drove north through Indiana, stopping at some spots I’ll cover in future posts. In Berne, a town proud of its Swiss heritage, there was a clock tower modeled after one in Bern, Switzerland. 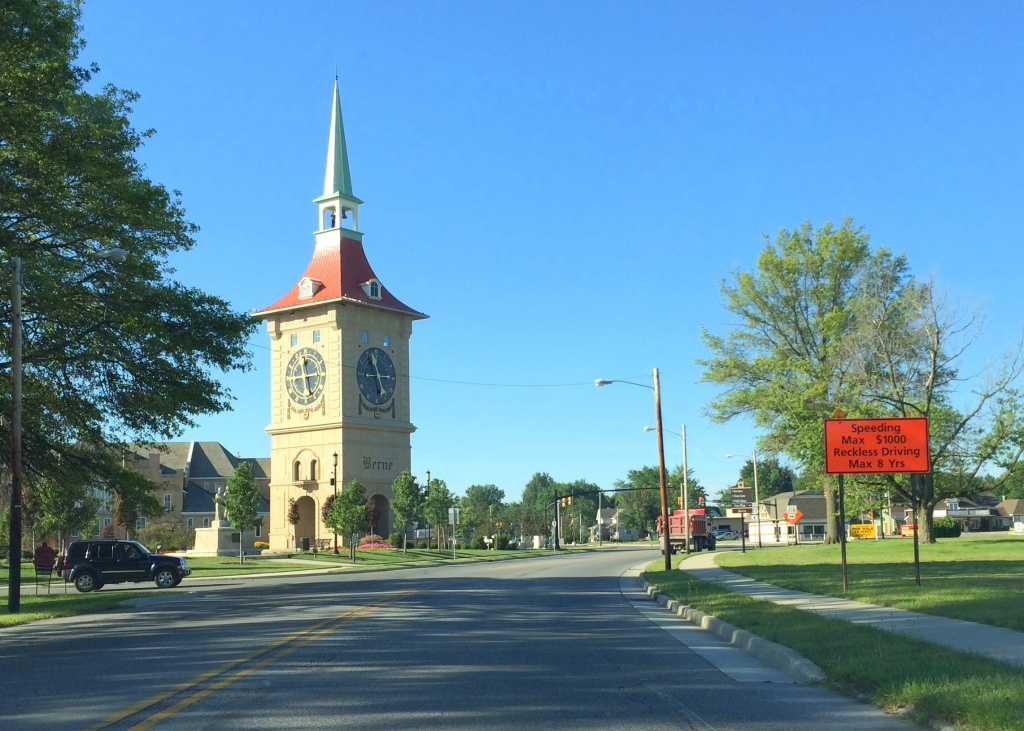 The nearby McDonald’s, where we stopped for drinks, had a parking area for buggies near the drive through. 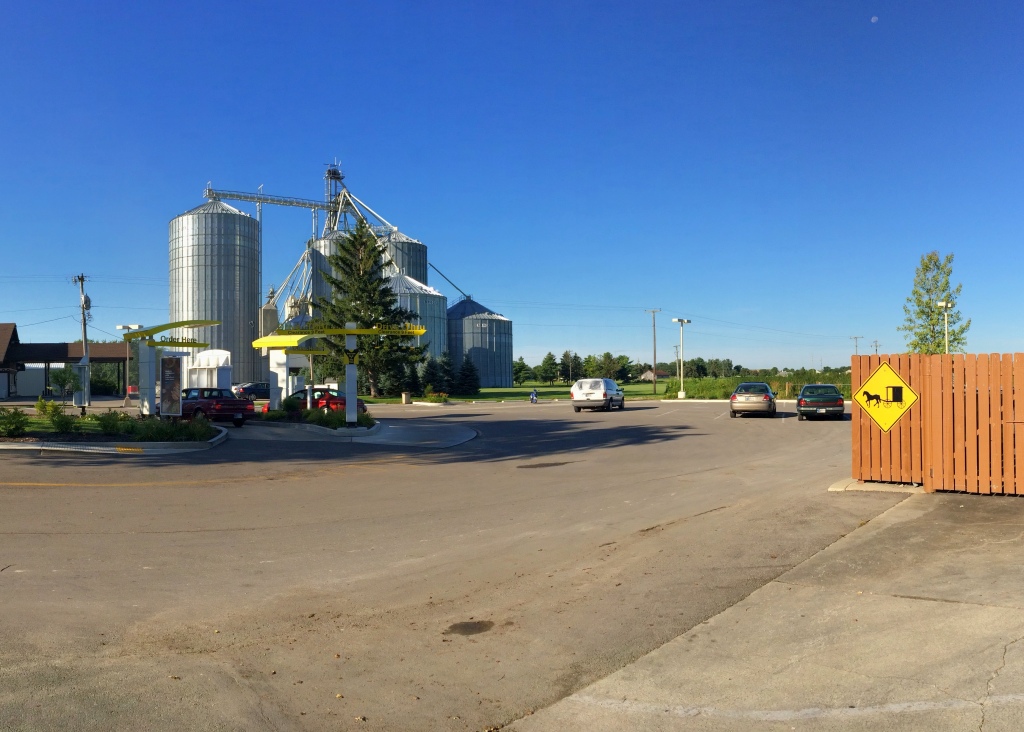 This entry was posted in Red Chair, Road Trips. Bookmark the permalink.