I made reservations at the Best Western in Mt. Orab, Ohio for Saturday night after the Reds game. It’s always a little scary showing up at a motel late at night in a town you’ve never been to before.

A scrawny guy in his sixties was talking to the young woman behind the counter. He was upset because his room was on the second floor and he had specifically requested a room on the first floor. For some reason, the motel had no elevator, and he had no idea how he was going to get all their stuff up to the room. As he complained, he mentioned at least three times that the woman he was with was a lot younger than he was. He seemed proud. We saw her later. She was a heavy, overly-made-up woman around forty. She was standing outside their second-floor room surrounded by about a dozen small bags and boxes and a six-pack of beer — with no luggage. It’s no wonder they didn’t want to climb stairs.

The scrawny guy was followed by two older Black women who were paying with cash. They couldn’t understand why the motel wanted a security deposit and insisted on a long conversation on the subject before finally agreeing to pay.

Then it was my turn. We were on the second floor. I noticed on the way up that the carpet hadn’t been vacuumed in a while. The room, which we finally reached around 11:30, was OK. Shortly after we arrived, my wife realized she’d forgotten to pack her toothbrush. I went back to the lobby to ask if they had any to give us. It was like I’d slipped back 20 minutes in time. The scrawny guy was complaining to the young woman behind the counter about having a room on the second floor. The two Black women were standing behind him with their luggage, waiting to talk to her next. I gave up and told my wife she’d have to survive without a toothbrush for a night.

In the morning, we ate breakfast at the motel. It was apparent that the other motel guests had gotten together just before we got down there and agreed to stand directly in our way and stare at us blankly. To their credit, all of them bought into the gag and kept it up the entire time. Seriously, it was weird. Every time we approached the counter to get something, somebody would step in front of us and just look at us like he or she couldn’t figure out what we were doing there.

We had nowhere to be until the historic site we were visiting opened at noon, but there was no way we were sticking around that hotel any longer. We stopped at Wal-Mart for a toothbrush and some other incidentals, then drove down to Georgetown, about ten miles away. We took a somewhat circuitous route that cut through the corner of a county I hadn’t been in before.

Georgetown is an old community that hasn’t cashed in much on the tourist trade. Ulysses S. Grant’s boyhood home and schoolhouse is there (next post), but otherwise it was a tired, sleepy place. We meandered up and down pretty much every street in town. The old courthouse and the storefronts on the square around it were obviously early- to mid-19th century. 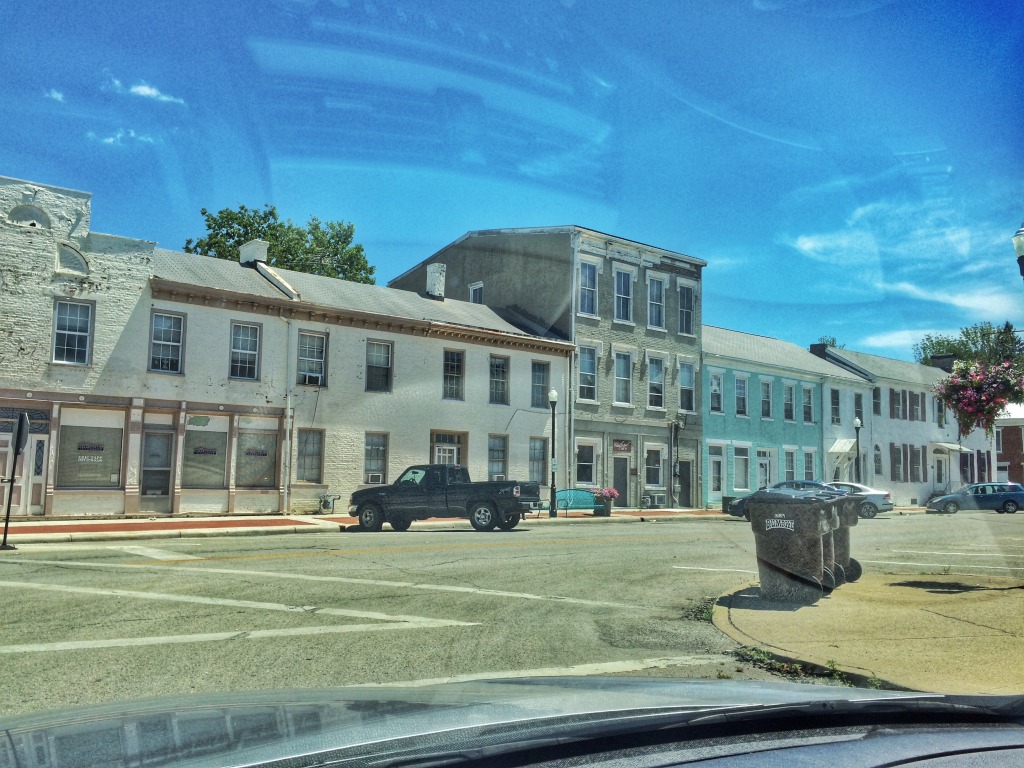 We still had two-and-a-half hours to kill, so we headed to the McDonald’s on the outskirts, bought a couple drinks and watched TV episodes on our iPads. At eleven, we headed to the Country Inn restaurant. It had higher reviews on Yelp than any other place in town, but we weren’t too excited. It looked and felt like a Denny’s. To our surprise, my wife’s fried chicken and mashed potatoes and my ham and cheese sandwich were both good. Not great, but considering our expectations, enjoyable. Most of the other diners were on their way home from one of the tiny churches in town. Our waitress had a very loud, screechy voice that was hard to listen to. We heard it often as she knew everybody else in the place.

After we left Grant’s house, we drove 13 miles south to Ripley, on the Ohio River. This town was every bit as old as Georgetown, but unlike its neighbor to the north, it was cashing in on the tourist dollars. It was right on the Ohio River and the stores that fronted the water were busy with shoppers. 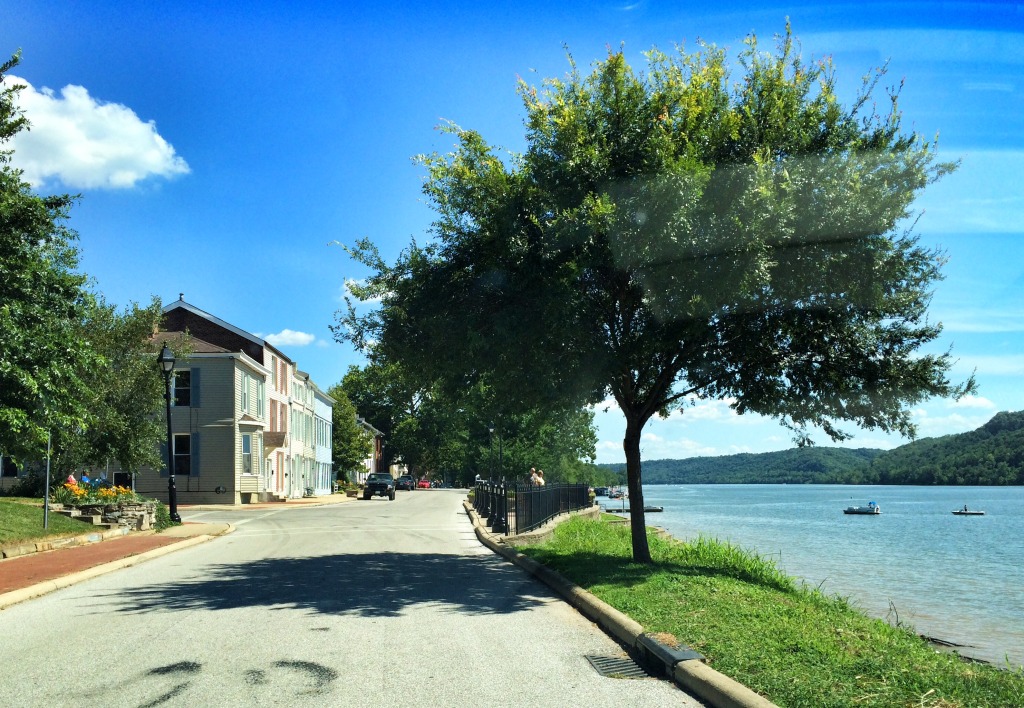 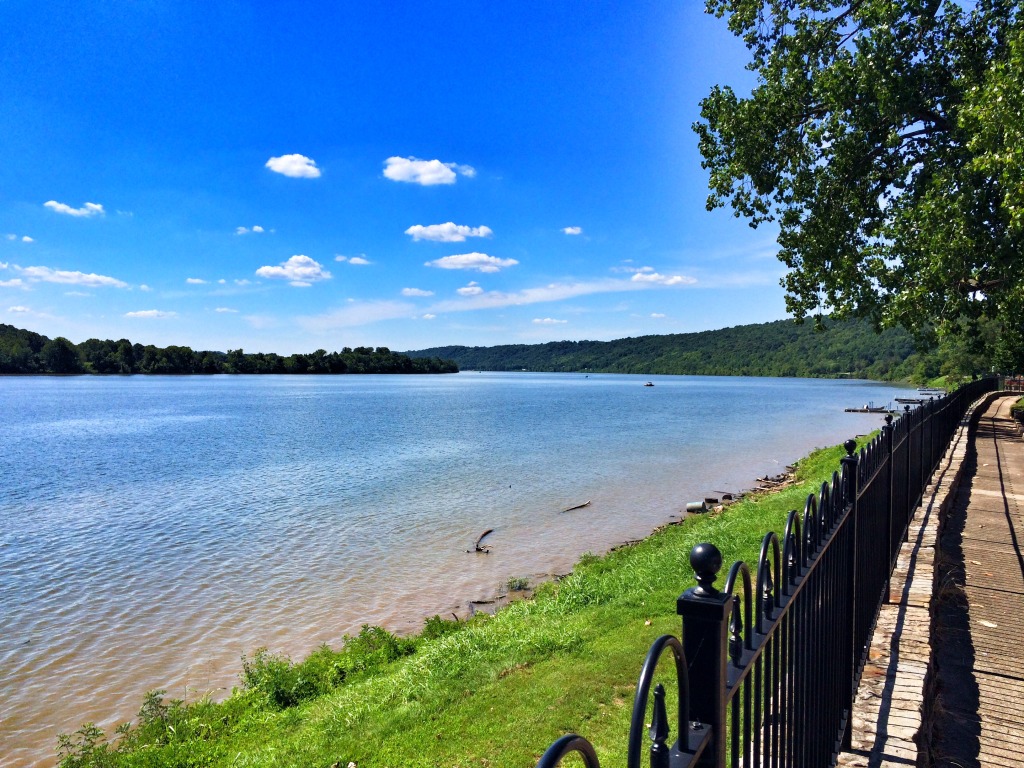 I saw a place called Rockin’ Robin’s Soda Shoppe and decided on a whim to stop in. A gang of motorcyclists had the same idea and took up most of the tables and booths. We found seats at the counter. The air conditioning wasn’t on, for one reason or another, and it was warm. The four or five young women working the place were unmotivated and we sat for about six minutes while they worked and stood around just a foot or so away totally ignoring us. A harried-looking woman came out of the back and yelled at one of the girls to wait on us. We ordered chocolate milkshakes to go and, to her credit, they were very good. 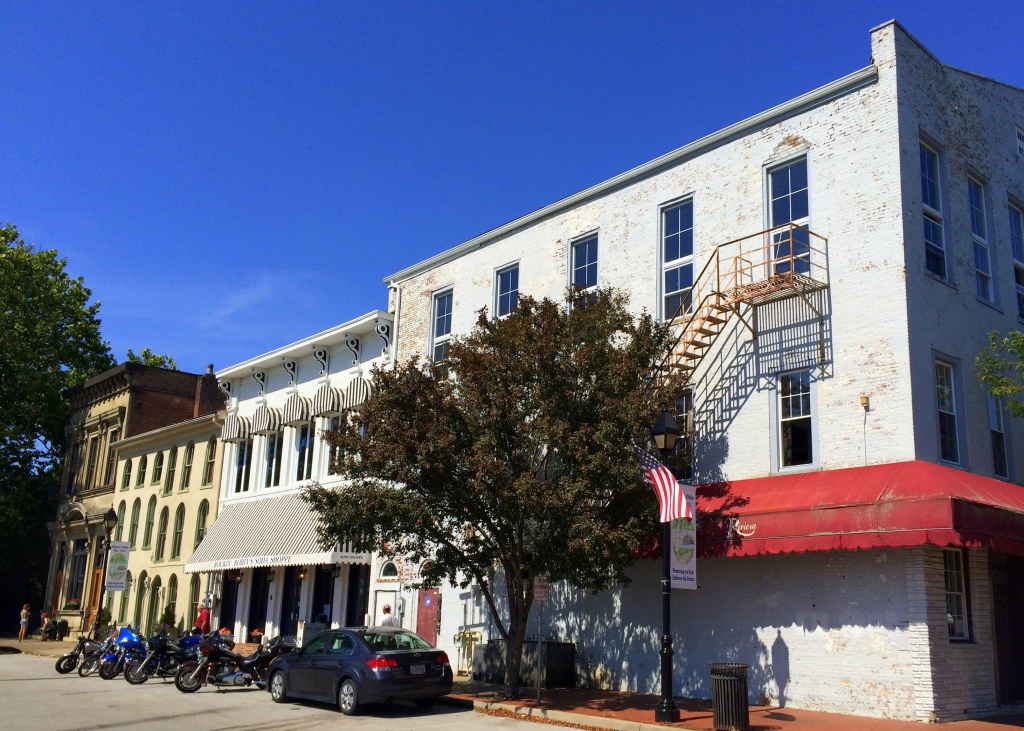 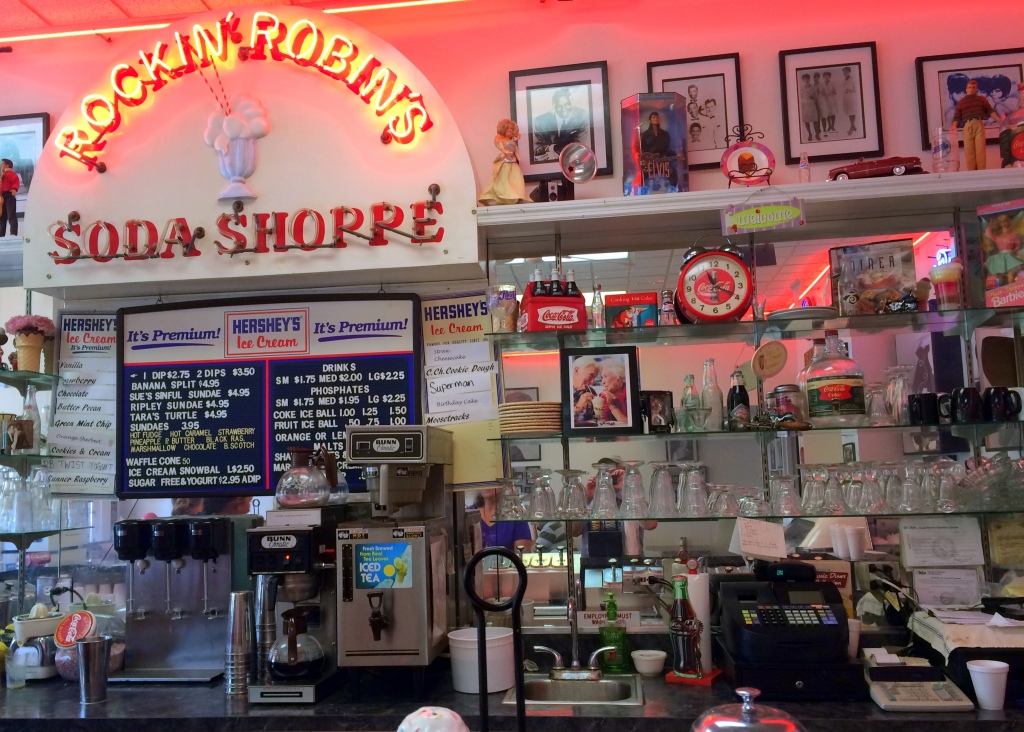 Our final destination for the day was Columbus. I picked a route that didn’t depart too much from the most-direct path but sliced through four new counties. We didn’t stop anywhere before supper at Panera — we like to try new things but it’s nice to get back to our comfort zone once in a while.