According to the Internet, and according to the sign on the door, Grant’s boyhood home on a backstreet in Georgetown, Ohio was supposed to be open at noon. It was 12:30, and the place felt decidedly empty. The doors were locked and nobody responded to my knocks. The web page said that tours could be arranged by calling the bed & breakfast down the street, so I walked down there and knocked on the front door and rang the bell. Nothing.

It irritates me when places aren’t open when their web pages say they should be, and this was looking very much like another example. We climbed back into the car and headed for the schoolhouse, about two blocks away. As I pulled away, I spotted another sign with a phone number to call if nobody was there. I called and got a message. I explained that we were there from Chicago and were only in town for the day and very much wanted to see the house.

Unlike the house, the schoolhouse had an “open” sign in the window and the door was unlocked. We were met by a nice guy who forgot to charge us our admission fee until we reminded him. He had just started talking when my phone rang. It was a woman responding to my call. The volunteer who was supposed to be at the house hadn’t showed up. It wasn’t the woman’s day to give tours, but she agreed to meet us there in half an hour. 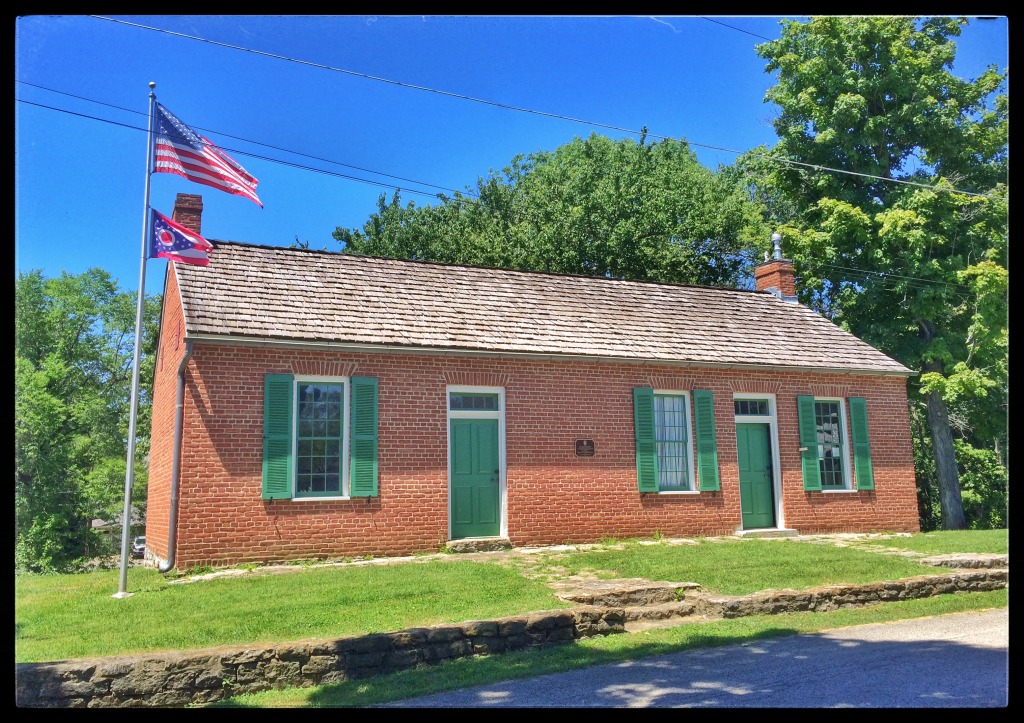 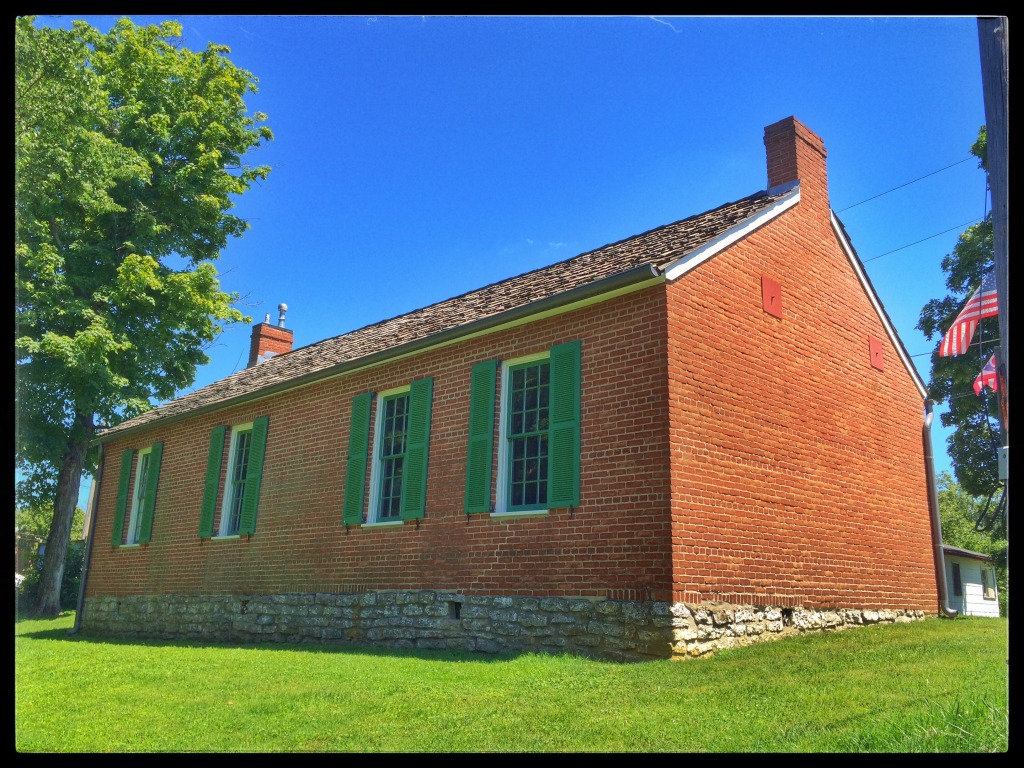 The tour of the school was very interesting — not so much because of the building itself but because our guide was well-informed and interested in the history himself. He showed us pictures of several of Grant’s schoolmates and told us their stories. A surprising number of students of that school became generals and admirals during the Civil War. 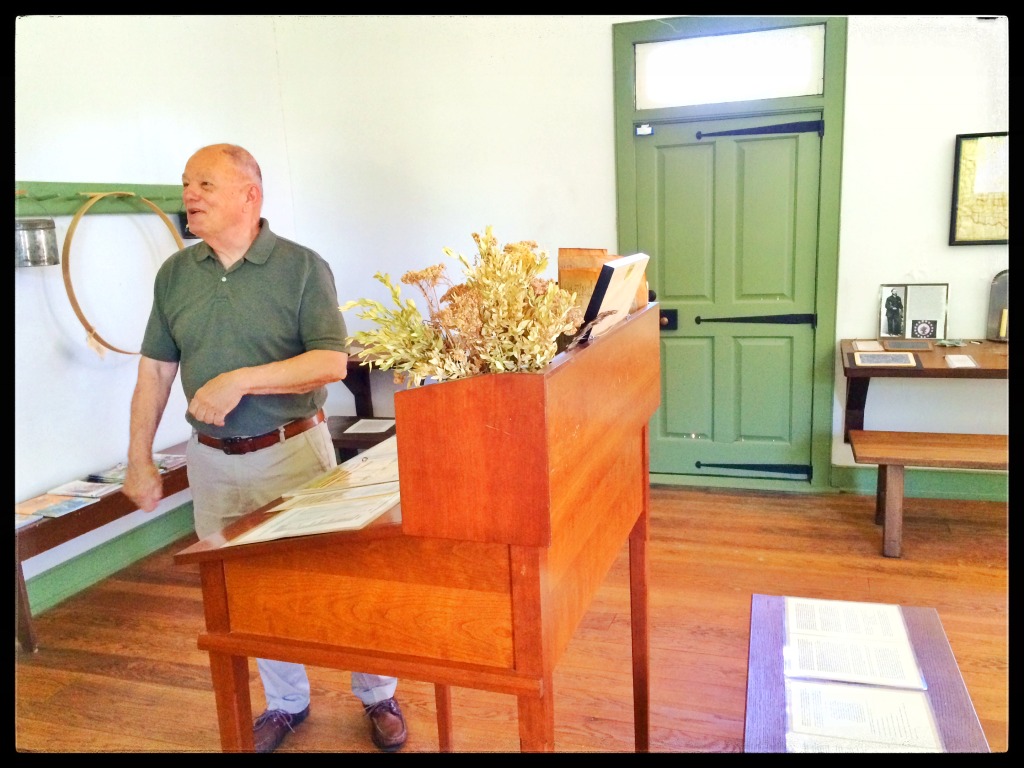 This bench is the only original piece of furniture. 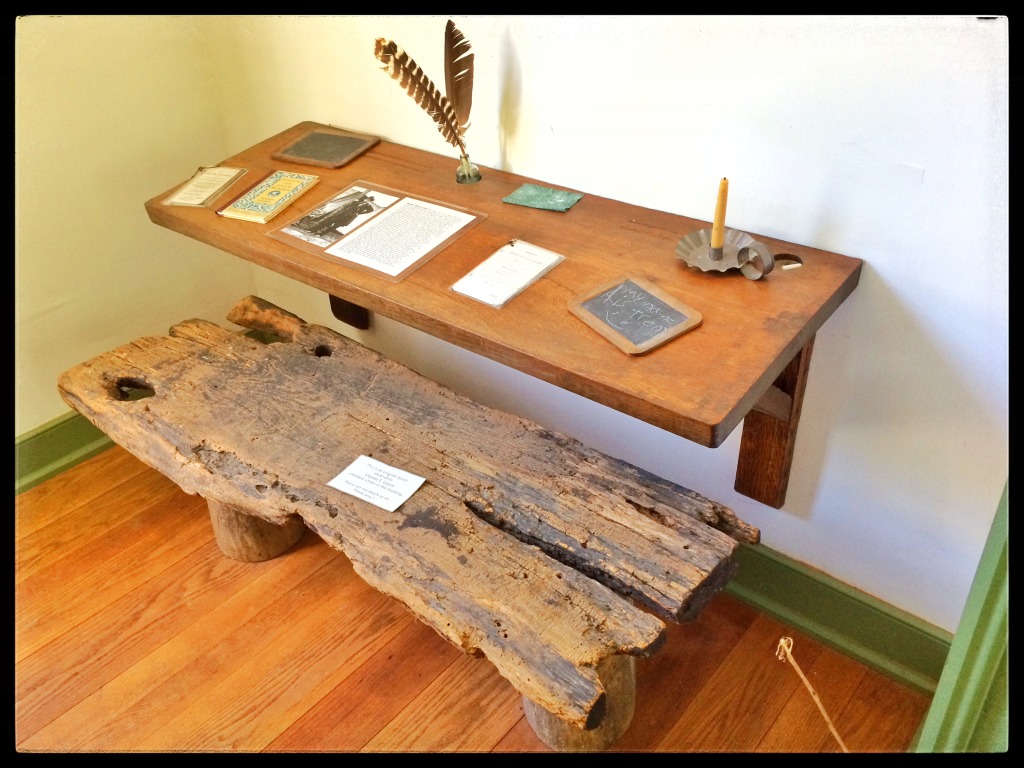 The school was built in 1829 and served as a school well into the 20th century. The building had two rooms. The other one contained displays and the gift shop. Our guide didn’t know for sure but he thought perhaps it was intended as the dwelling of the teacher. They had three of Grant’s original drawings on the wall. 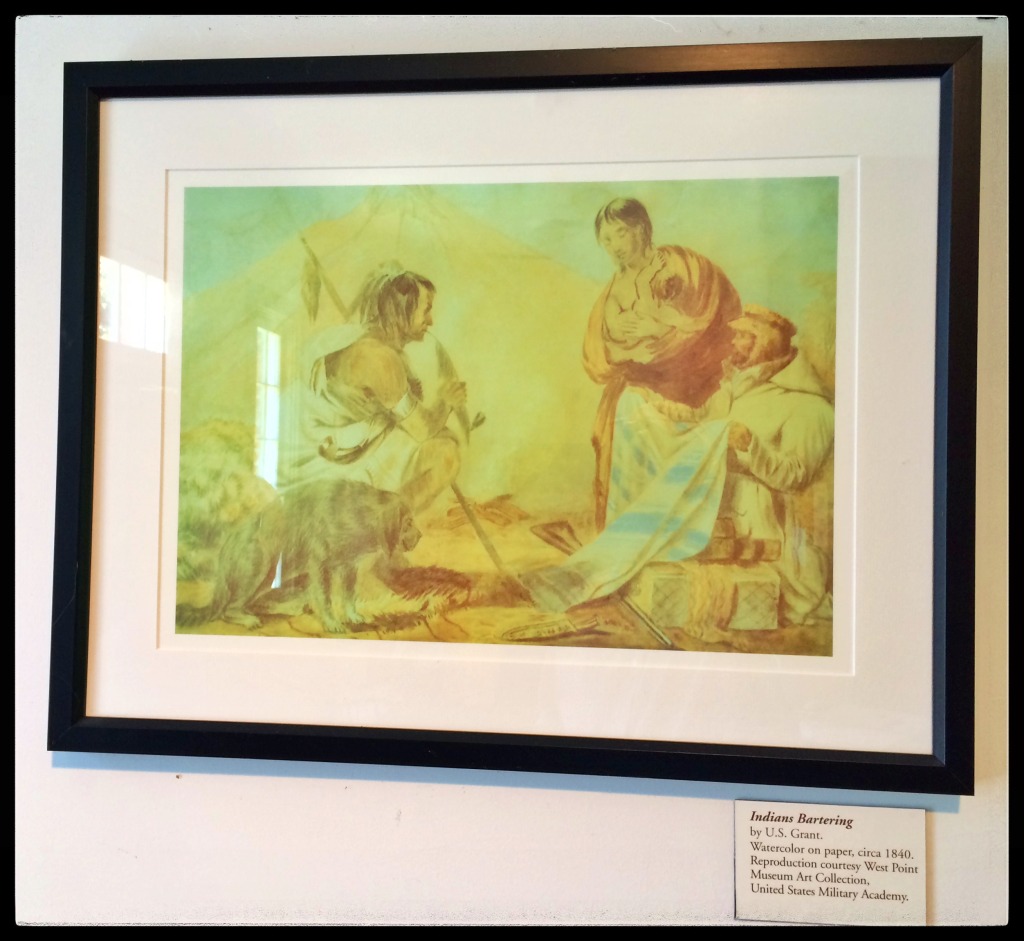 We were nearing the end of our tour when the woman from the house called back. She had a group coming for a tour and wanted us to come over so she could take us through the house at the same time. We headed over right away, but there was nobody there but her. She gave us our tour and when we left 45 minutes later, still nobody had showed.

Ulysses’ father, Jesse built the house in 1823 and enlarged it twice before he sold it in 1840. There are a few pieces of Grant family furniture in the house. 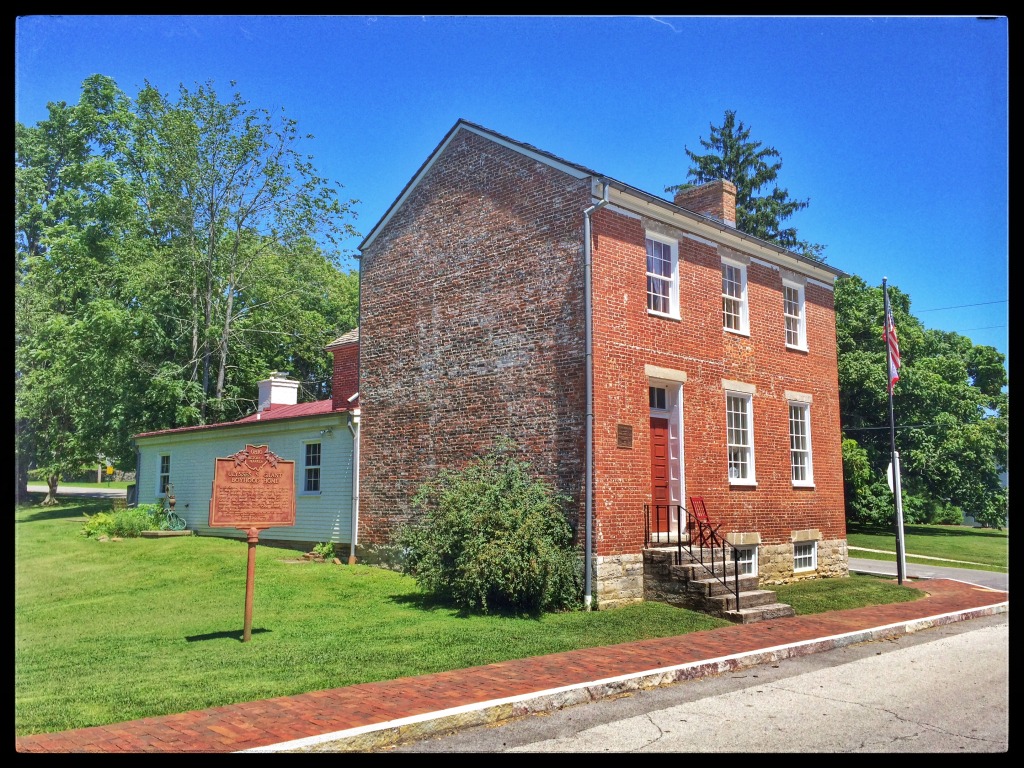 The small brick section in the middle is the original house. 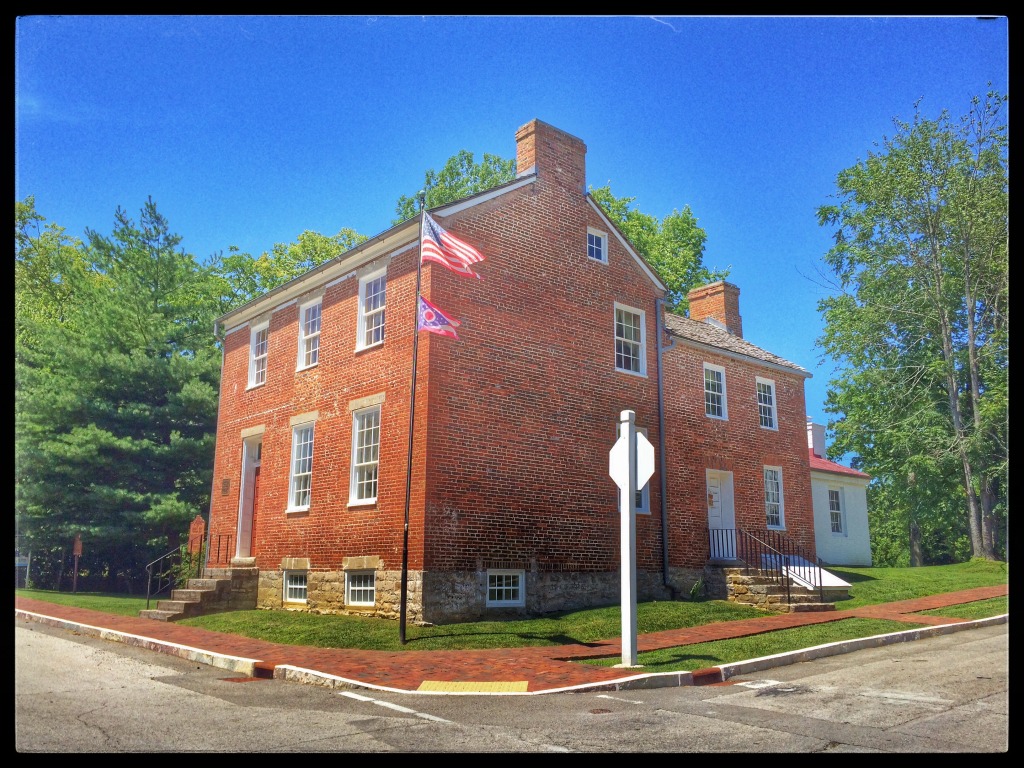 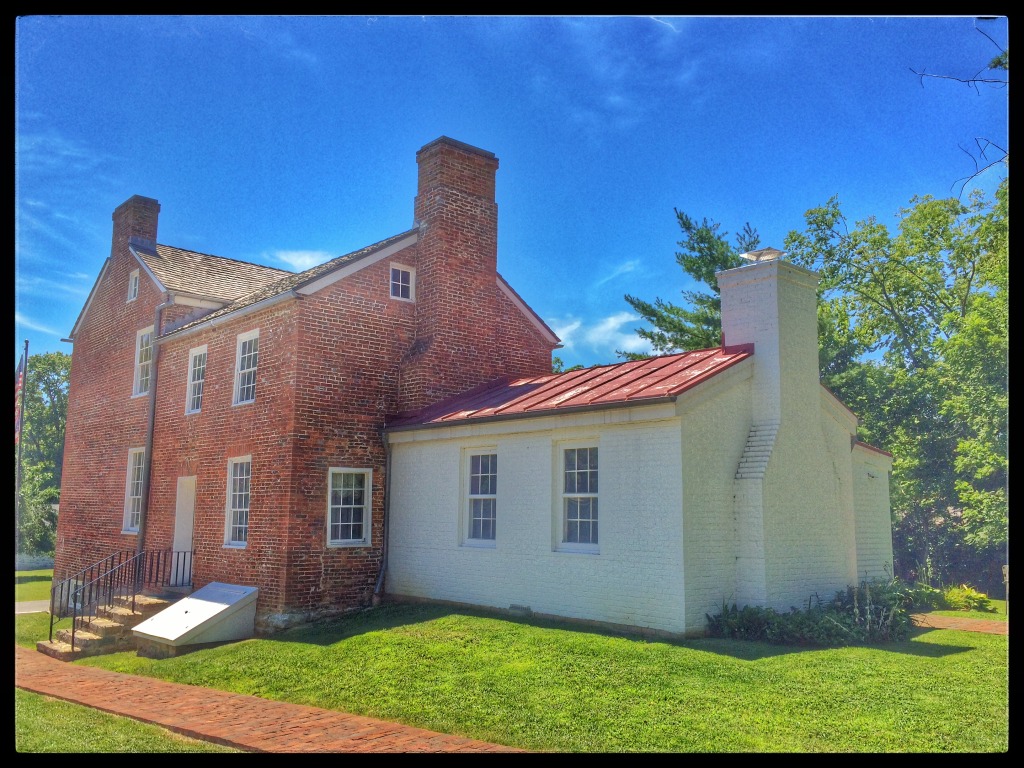 We were ushered into a small room where an animatronic model of a teenage Grant told us some anecdotes about his youth. The basic gist was that Grant didn’t like working in his father’s tannery across the street. 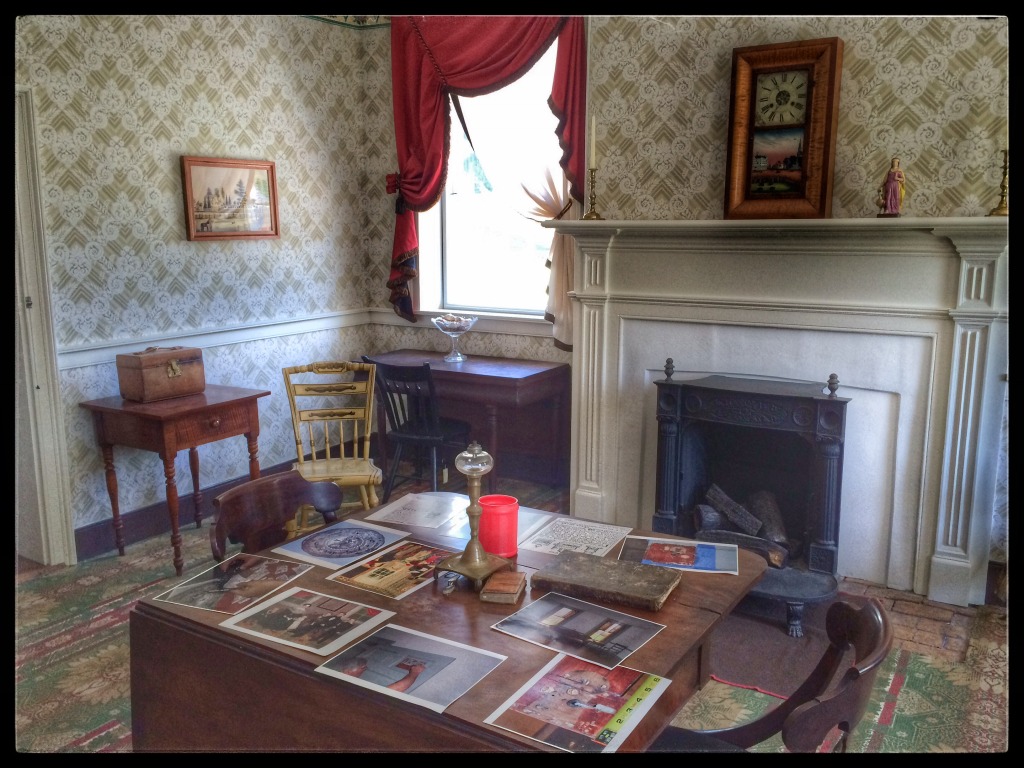 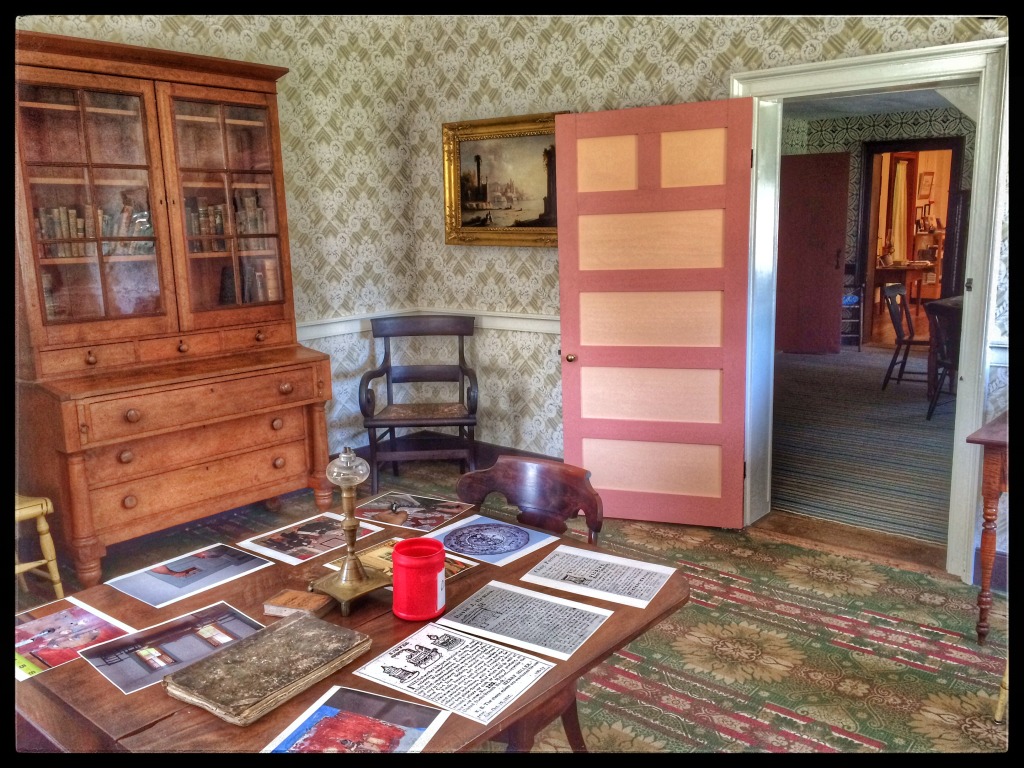 The horsehair couch in the front room has been reupholstered, but it was owned by the Grant’s. 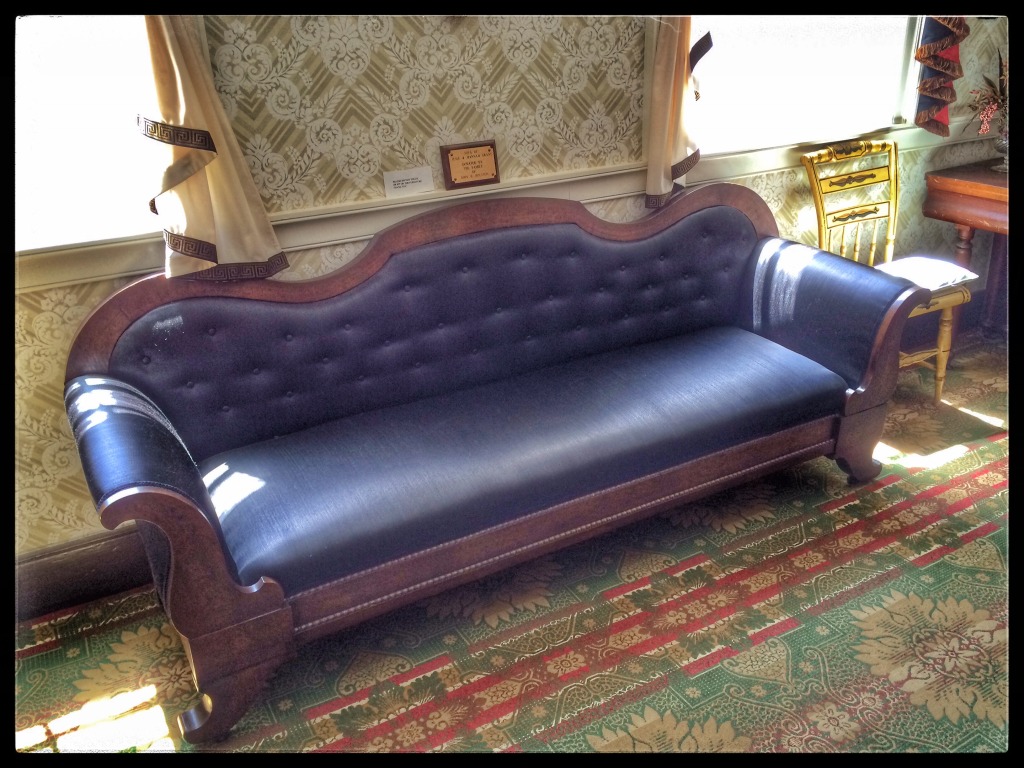 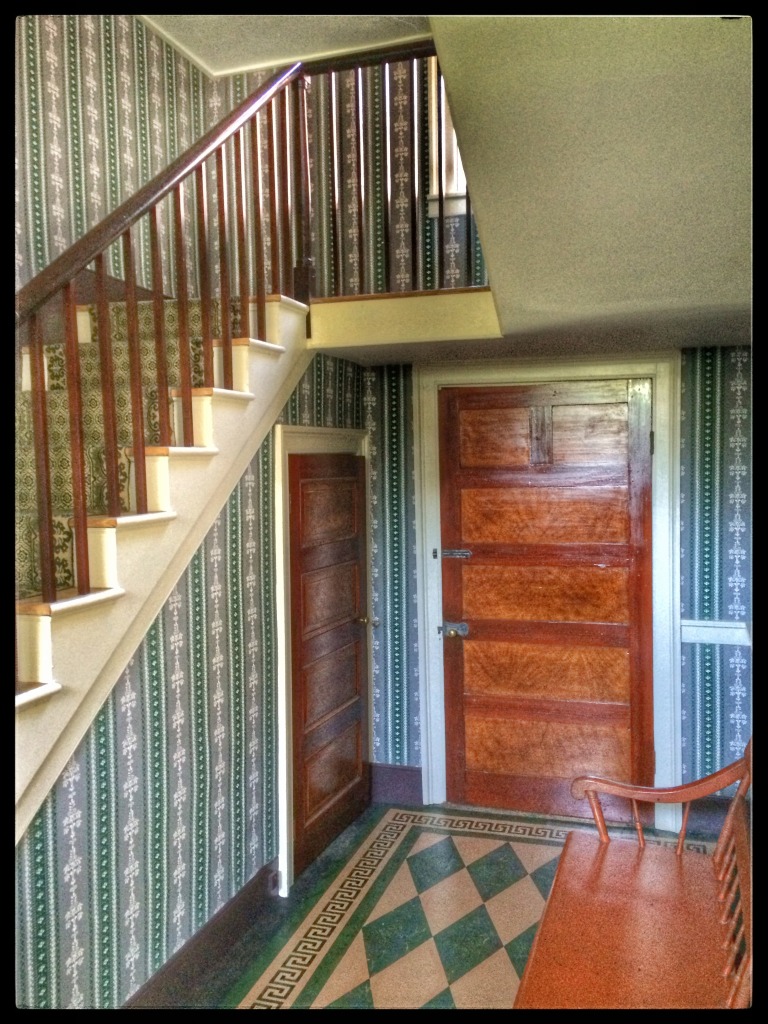 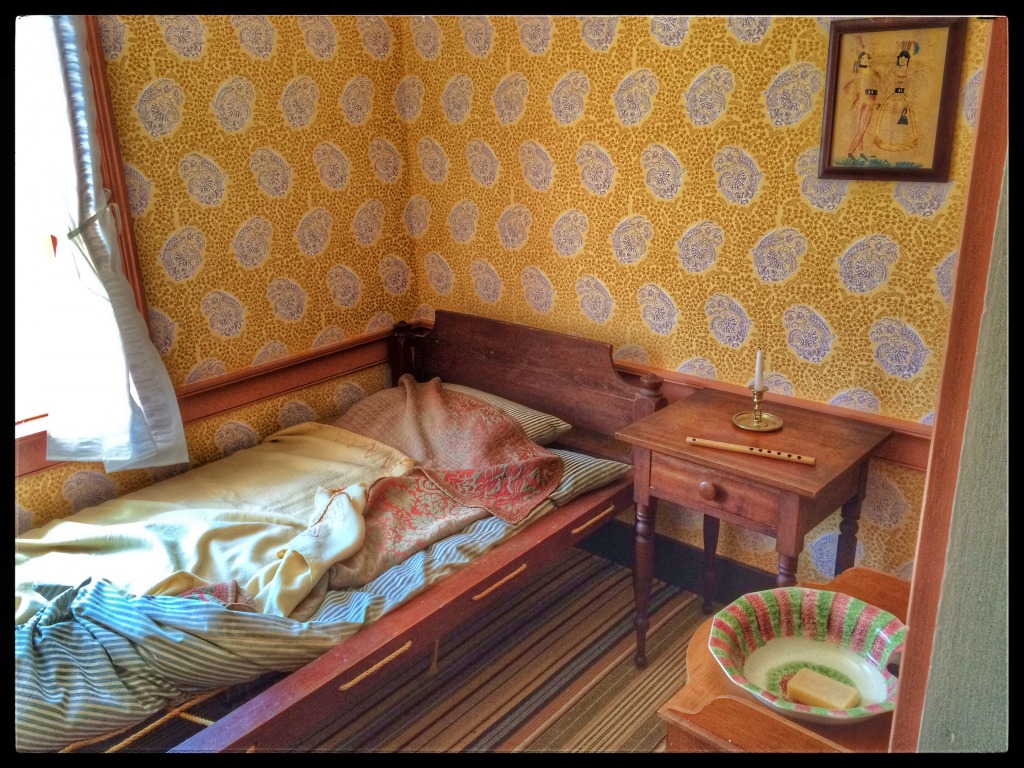 The chair in the foreground with the rope was built by Jesse Grant. 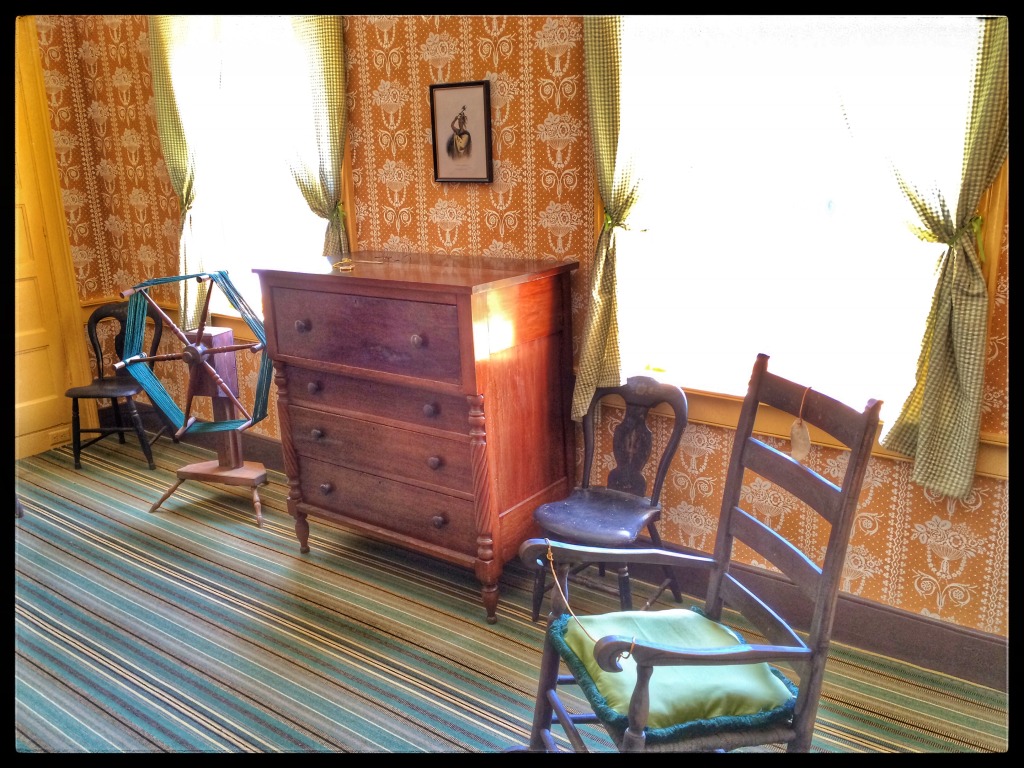 Our guide is showing us Grant’s baby bed. 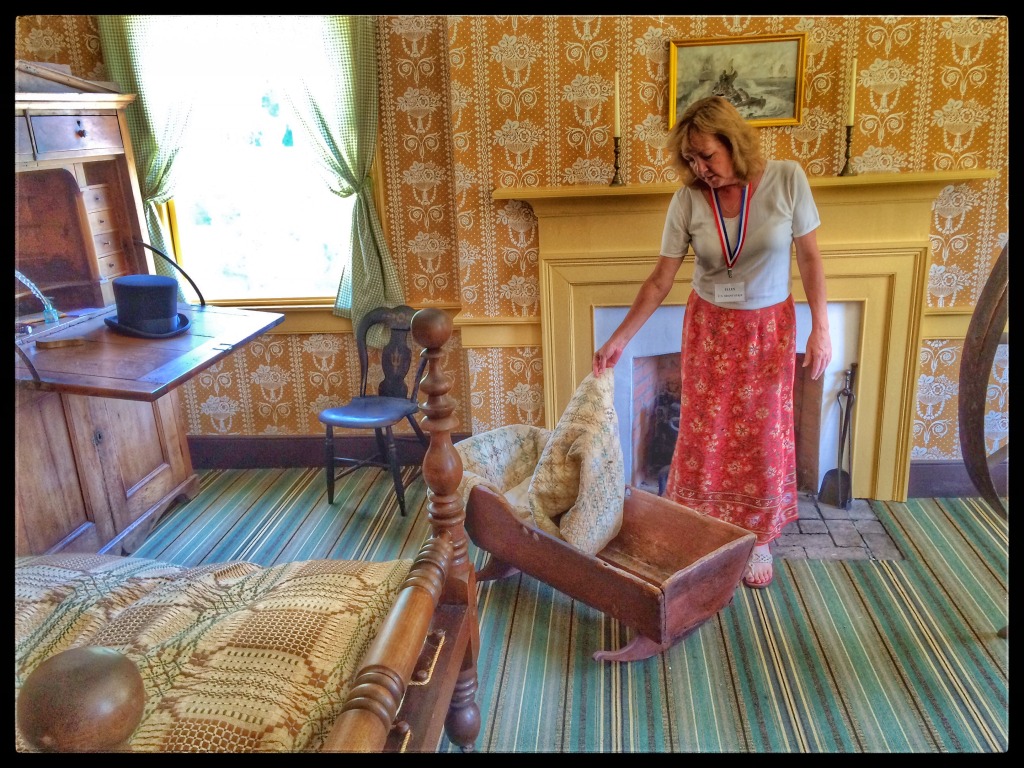 The tannery across the street. It has been donated to the park but not yet restored. 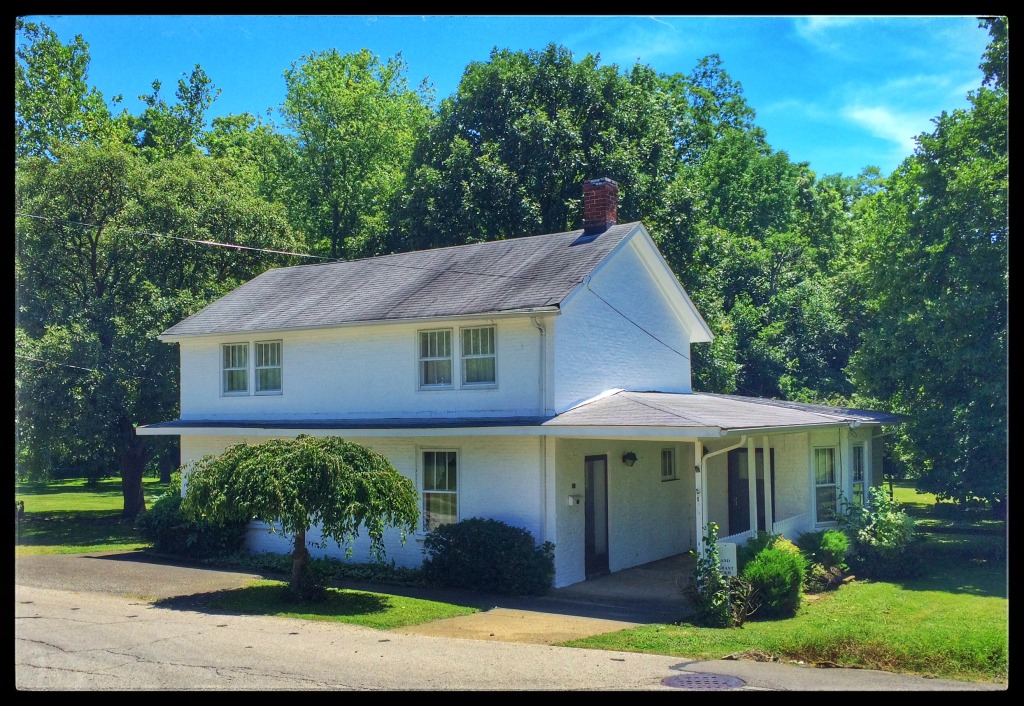 Our guide was not nearly as knowledgeable as the guy at the school, but we appreciated that she came in on a day when she wasn’t scheduled to give us our tour. For example, she didn’t like the loud wallpaper throughout the house and stated repeatedly that she didn’t believe that the Grant’s would have decorated that way because she wouldn’t have. I told her that we’d toured a lot of houses from that era and almost all of them were decorated like that, but I don’t think I convinced her.

She was most proud of a large slab of stone outside the backdoor of the house. When Grant was 14, he managed to dig it out of a nearby creek with the help of a team of horses and deliver it by himself to a rich neighbor. 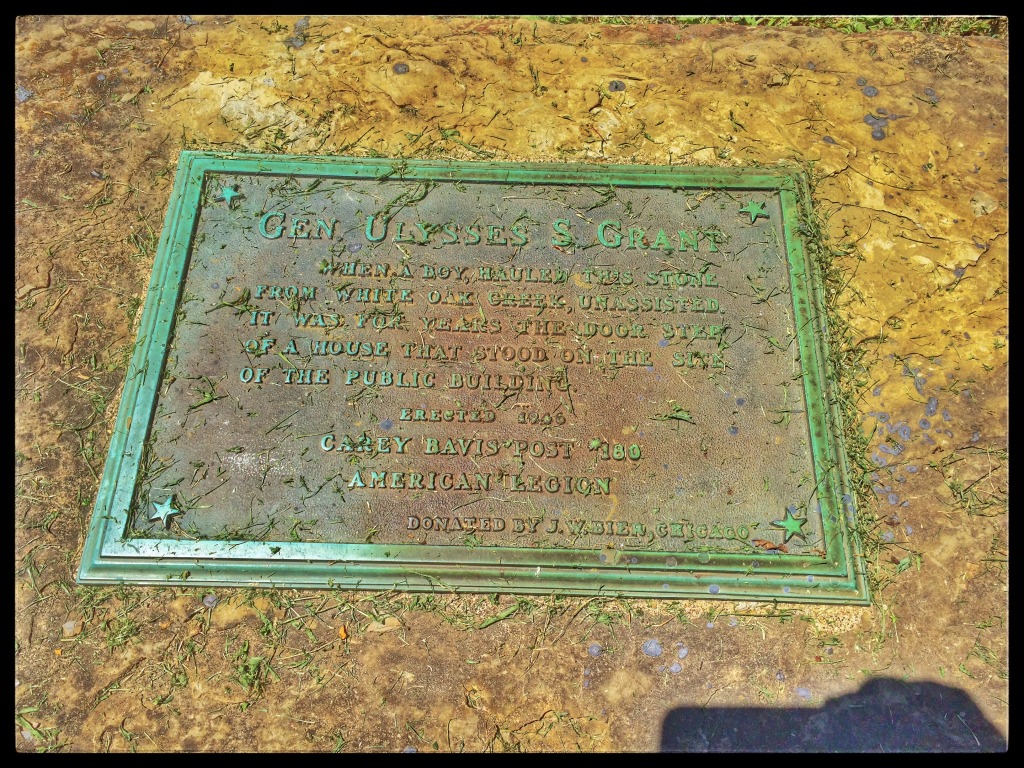 Just up the street from the house was a building that served as the schoolhouse before the one we toured was built. Grant attended here also. 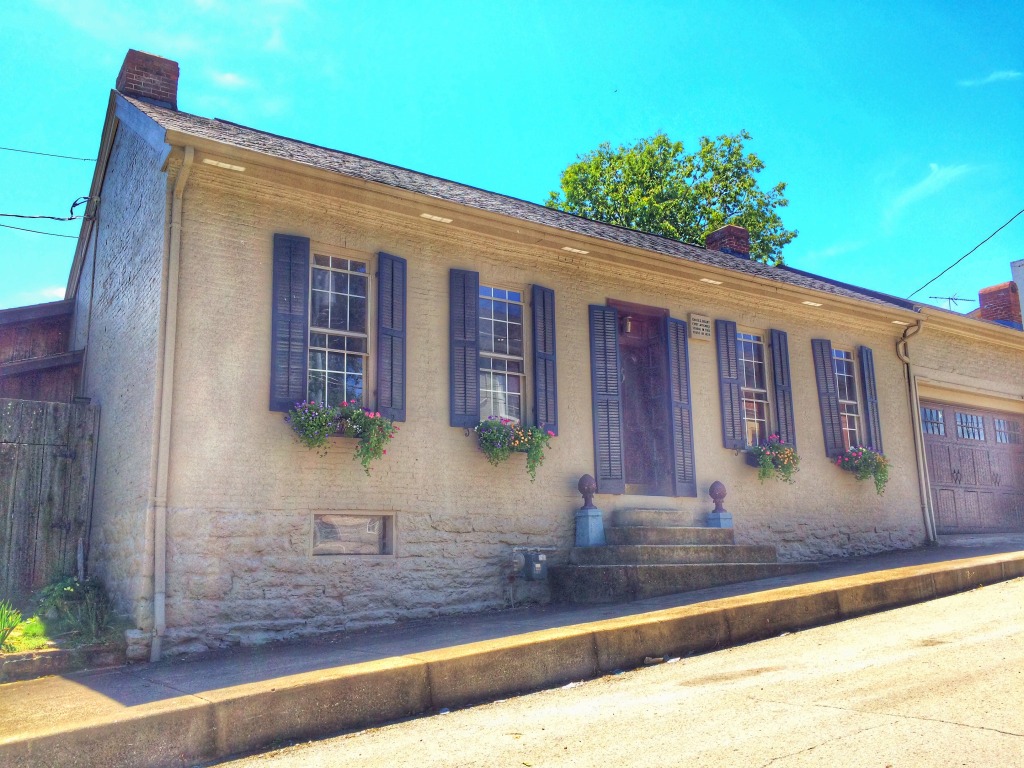