I decided to skip a few conference sessions. This gave me about seven hours until the closing banquet. But what to do with the time?

I figured my best shot at a lifer was to look for MacGillivray’s Warblers along Hayden Creek which, as an added bonus, could only be reached by driving Route 50 through Bighorn Sheep Canyon where I might see … Bighorn Sheep.

I’d rafted the Arkansas River through the canyon back in 2002, with one eye out for large mid-stream rocks and the other for sheep on the rocky slopes. I saw plenty of the first but none of the second on that trip.

I recall being a little offended that somebody had ruined the ambiance of the canyon by running a highway through the middle of it alongside the river. But I’ve grown up since then, and it didn’t bother me at all that they’d put a river there next to the road.

The state of Colorado has little parks along the river which require a $7 parking pass. But the road also has wide shoulders every quarter mile or so that I could stop at for free. I opted for these. I headed west from Canon City, stopping about twice a mile to look about. I’d heard that sheep frequent the upper slopes of hills during warmer weather, so that’s where I looked. 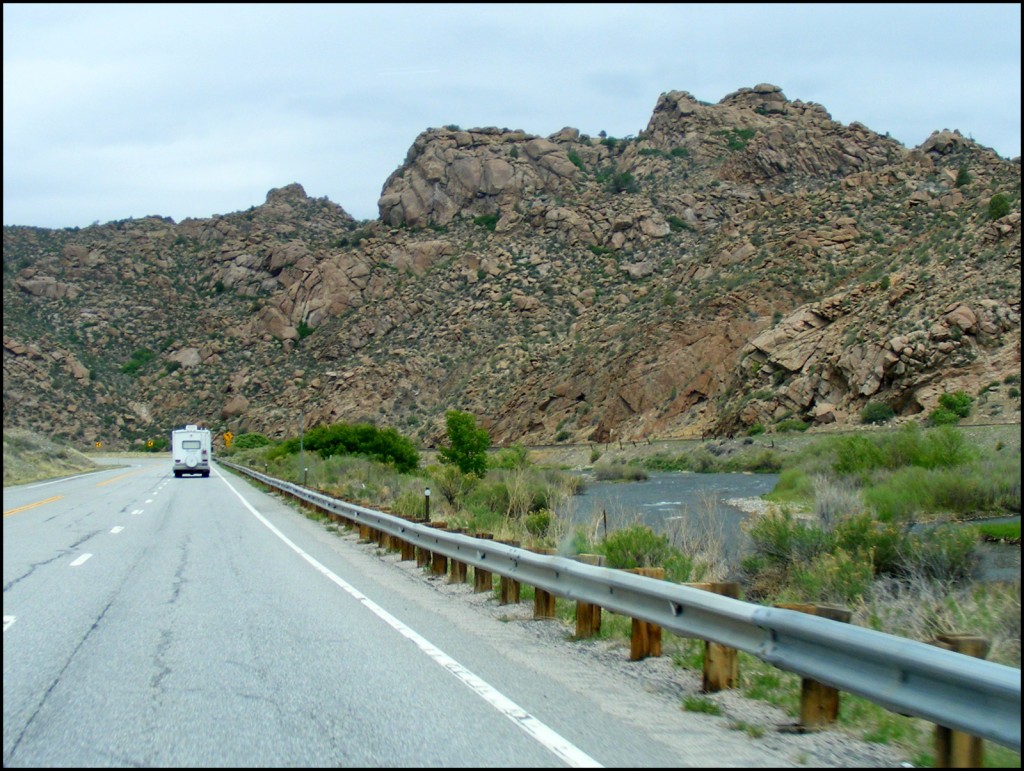 I should have been looking at my gas gauge. I suddenly noticed I was down to about an eighth of a tank. It was 20 miles back to Canon City, and I was in no mood for a 40-mile backtrack. The next town of significant size was Salida, about 40 miles ahead. That was pushing it, but I decided to go for it. I figured all my stopping and starting wasn’t doing my gas mileage any favors, so I didn’t pull over anymore. I hoped there might be some tiny community in between where the residents use gas.

There was. It was called Cotopaxi, and the one business was a diner/grocery store/bar/gas station/who knows what else. 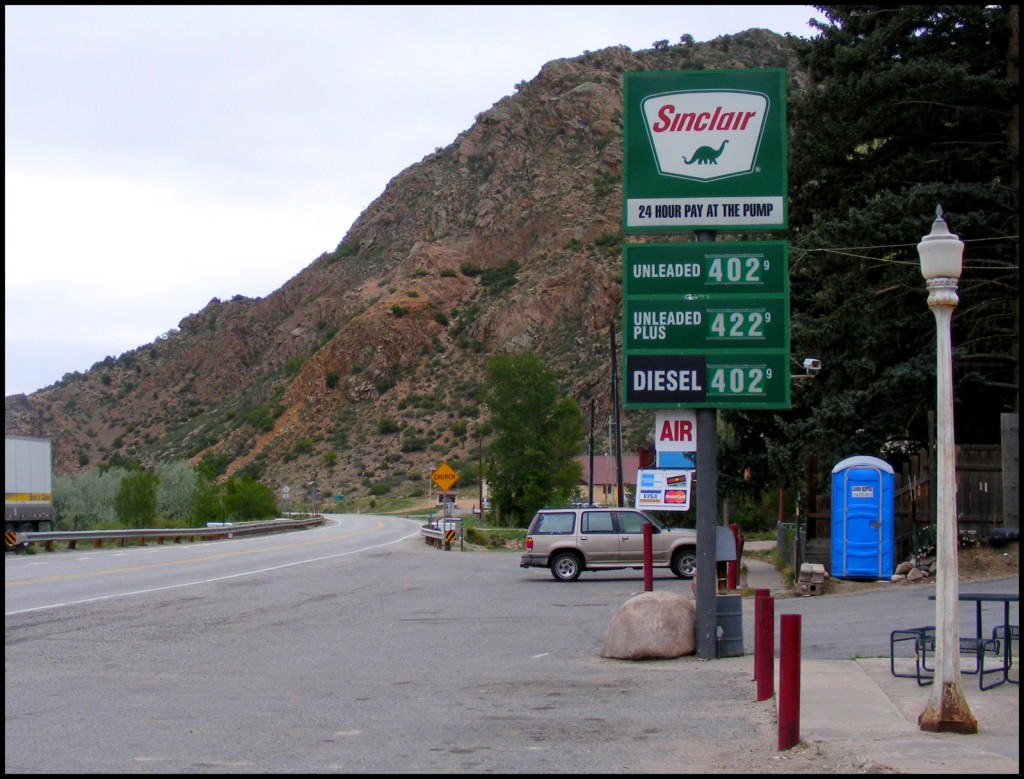 A sign by the register informed me that the community had been named after an Ecuadorean volcano. The surrounding hills reminded an early miner of his days in South America.

Hayden Creek wasn’t much further. I turned north on a road that soon became dirt as it entered San Isabel National Forest. Rain was forecast later in the afternoon, and the higher I climbed the closer I got to the clouds. (Yea, I know this is always true, but you know what I mean.) 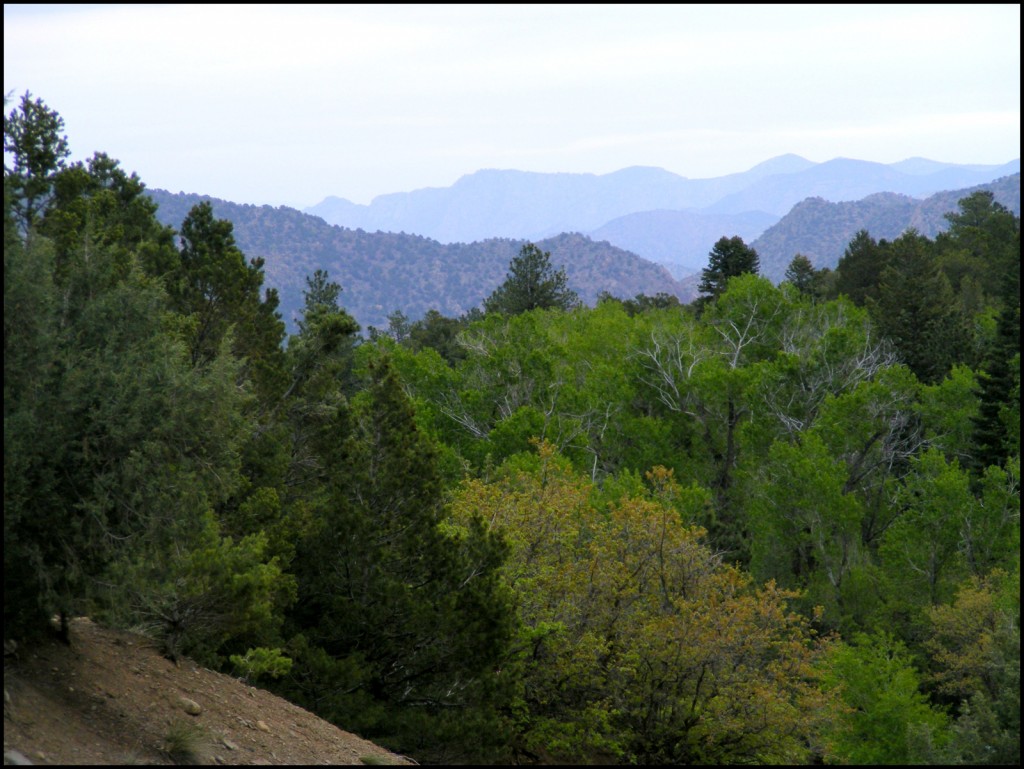 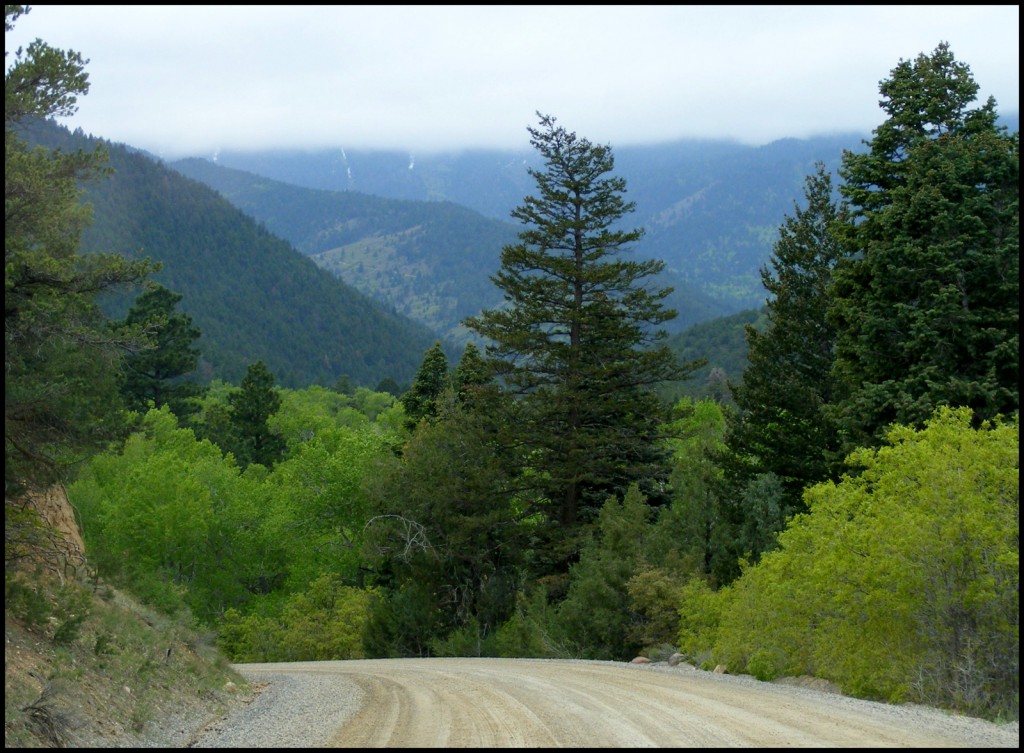 The road ended at a campground cul-de-sac with about 15 sites, only one of which was occupied. The government wanted my money to park there too, but I didn’t give them any. I got out and walked along the creek for about 45 minutes, willing a MacGillivray’s Warbler to sing, but my power to compel birds to do what I wish has never been strong. It would have been the perfect setting for a lifer …

In fact, there weren’t many birds around, lifers or not — except Robins. Almost everywhere I went in Colorado, from desert to foothills to high-mountain passes, I saw Robins.

I headed back east along Bighorn Sheep Canyon, stopping every mile or so and scanning the slopes. 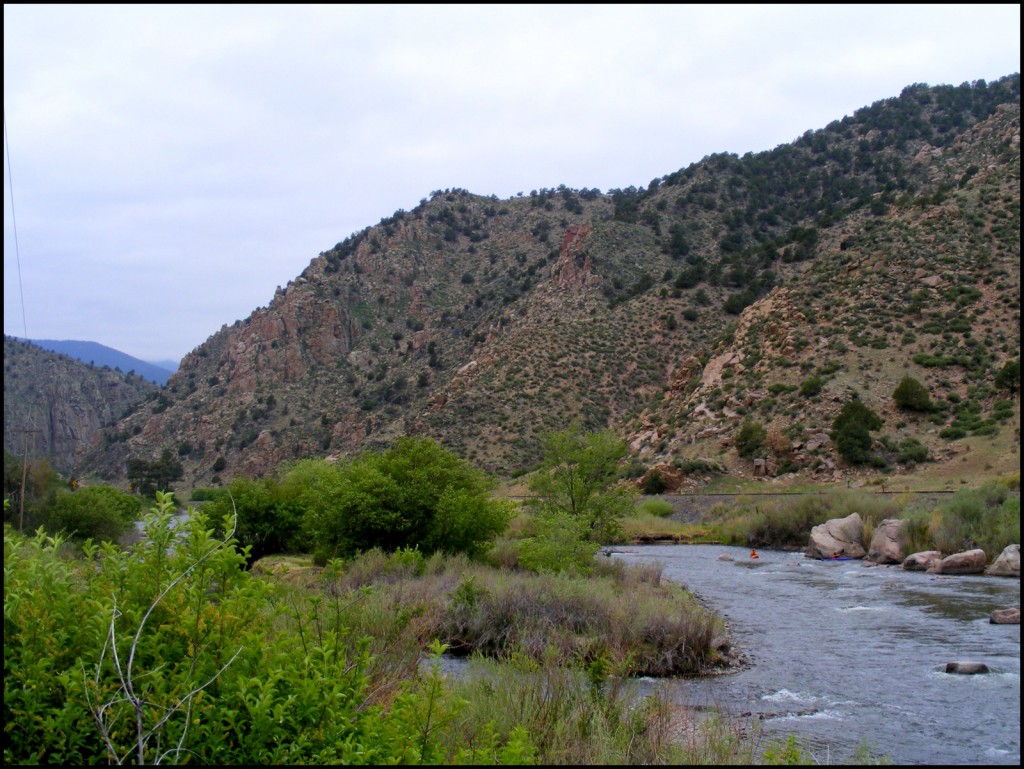 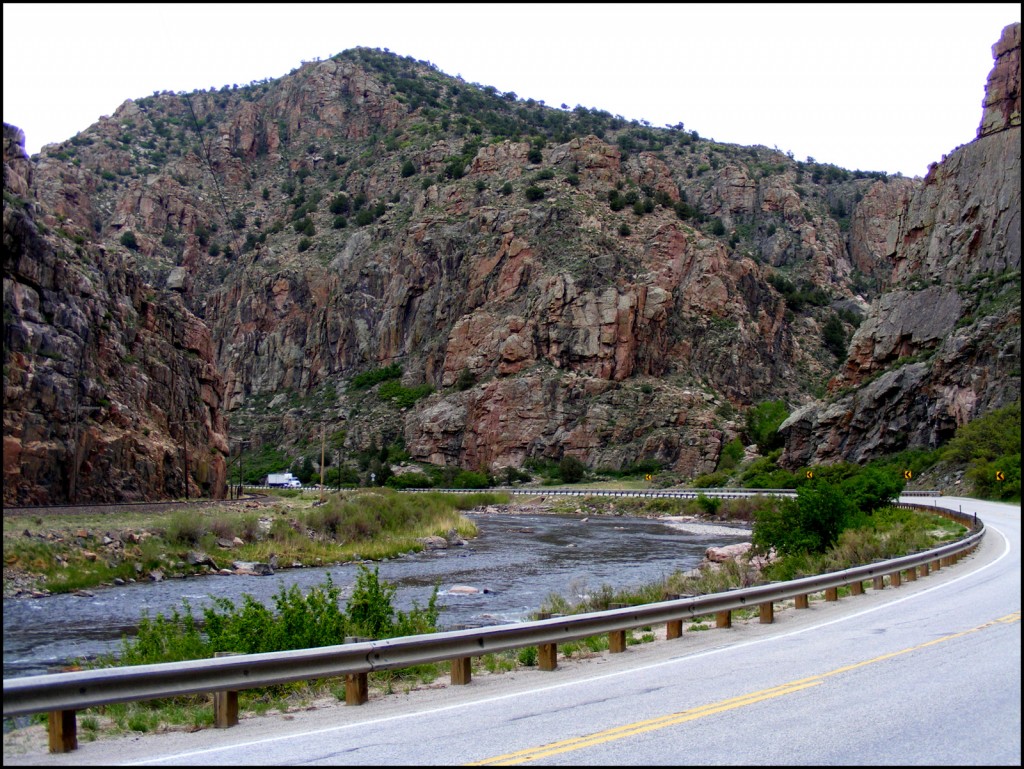 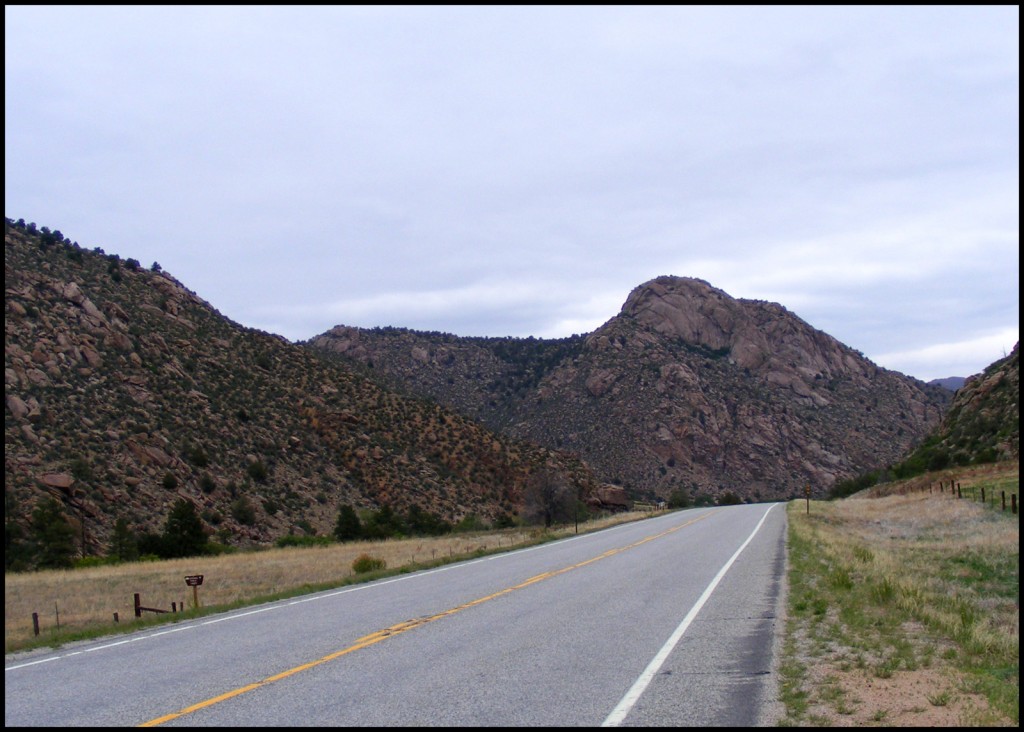 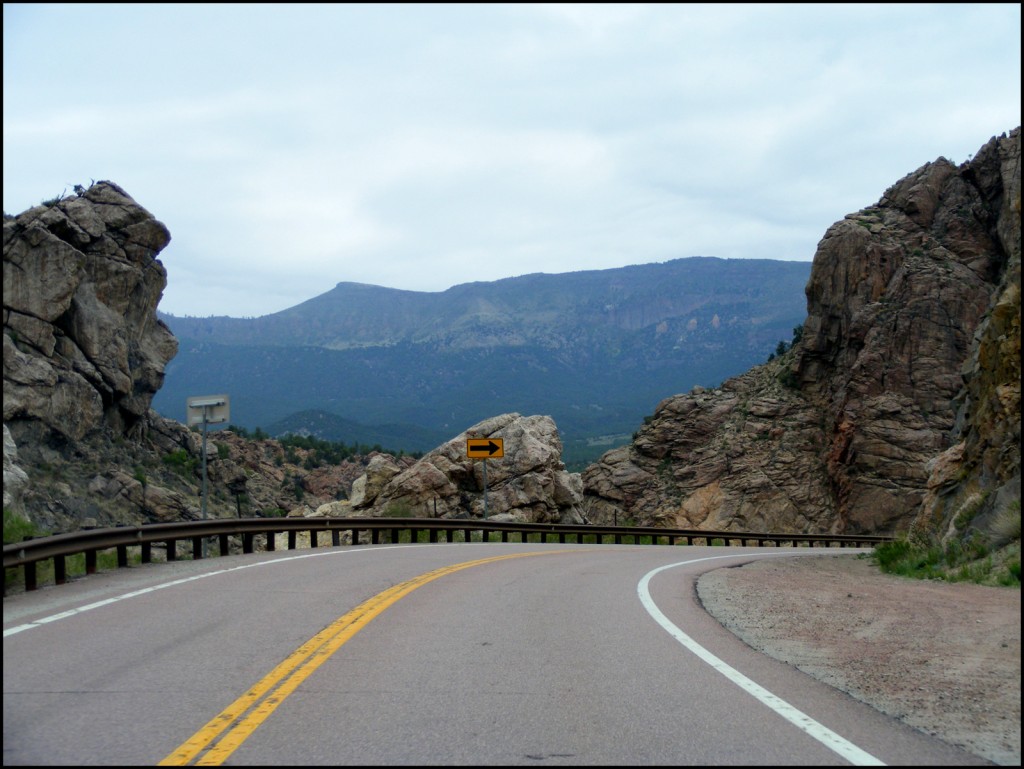 My quest began to feel pointless after a while. Still, I figured I had a better chance of seeing sheep by looking for them than by not looking for them … But I soon began to pick the places I pulled off based on whether there were fast-moving cars and trucks gaining on me.

I was nearing the end of the canyon and had already decided to head back to Colorado Springs by a different route, through Cripple Creek. I was driving slowly, scanning the hillsides more out of habit than hope by this time. A car came up behind me and I pulled off at yet another wide spot — and almost hit three Bighorn Sheep. But that’s a story for another post.