dendroica (from dendron, tree, and oikein, to dwell) discolor (of different colors)

I had four incredible days of birding this spring and was reinvigorated.  I joined the American Birding Association for the third time, began a birding journal, and read a bunch of books about birds.  I also made a list of all the birds that were not on my life list that I had a reasonable chance of seeing in Illinois, Wisconsin, Arkansas, or Indiana.  The easiest-to-see bird on the list seemed to be the Prairie Warbler.  My bird-finding guides said they were uncommon, local but regular in the blowouts in Indiana Dunes State Park.  I had gone there in 1991 and successfully searched for a Cerulean Warbler.  Maybe I could do it again.

I planned on leaving home at 5:15, and I did.  This was the last thing that went as planned for a while.  I got caught in the traffic jam that has been established for many years on I-80/90.  Its been there so long it ought to have a name (The John B. Whippleflume Memorial Traffic Jam).  I got to the park 45 minutes later than I had intended.  I was going to park in the National Lakeshore parking lot east of the state park and walk back along the beach a few hundred yards to the blowouts.  Instead, I inadvertently pulled into the state park and had to walk the length of the park, close to three miles, to get to the blowouts.  And then I took the wrong path and ended up walking past the blowouts to a point very close to the Lakeshore parking lot I had originally intended to park in.  I had to walk back along the beach after all.  It was now a couple of hours later than I had expected to get to the territory.  But it turned out not to matter.

I was walking along a ledge of sand, with the dunes on my left and Lake Michigan below a ten-foot bank on my right. The first blowout, a small one, was just ahead. Before I even rounded the corner, I heard a Prairie Warbler singing. I knew the song because I’d listened to it many times on tape in the car on the way down: a series of seven or so ascending “zees.” I climbed up onto a short dune ridge and looked, quickly locating the bird way up in a pine on a ridge between my blowout and another small one to the west. The bird, an adult male, was pretty far away.  I saw the bright yellow undersides, with black streaks, and I could just make out the face pattern with an eye-line cheek-line and yellow cheek. But before I could get closer it flew off over the ridge into the next blowout. I wasn’t satisfied. 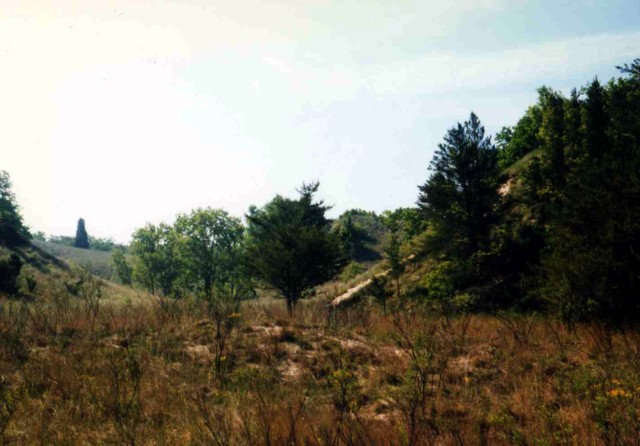 I worried needlessly. As soon as I entered the next blowout, I heard the warbler singing again. It was again in a pine, near the western edge of the clearing, but this time a lot closer to the ground. I climbed a dune on the east side and got on a level with the bird. I could now see it well. The rust-red streaks on the back stood out sharply against the olive-green back, much more so than shown in my field guides. The vivid yellow on the neck, chest and belly faded into lemon yellow under the tail. The black streaks on the sides of the neck and chest were very clear. It was a very beautiful bird. It had a long tail that twitched sideways, displaying the white outer feathers. While I was watching it, an American Goldfinch landed nearby. I thought the warbler looked more robust in size, but similar in length. I crossed the blowout and was able to study the bird from about 30 feet away. It moved slowly through the branches, stopping often to raise its head and sing. It stuck primarily to the outer branches. Several times it paused in its foraging and sat on a branch looking around and singing steadily. As I watched, it suddenly darted down and reappeared with an inch-long, skinny caterpillar of some kind in its beak. It immediately flew down to a small pine on the ledge of sand above the lake. I followed, thinking perhaps a nest was in the area.  When I got close, it flew off again, back over the ridge to the top of the pines where I first saw it. I didn’t want to disturb the female (if there was one), so I kept after the male and quickly located him again by his singing. 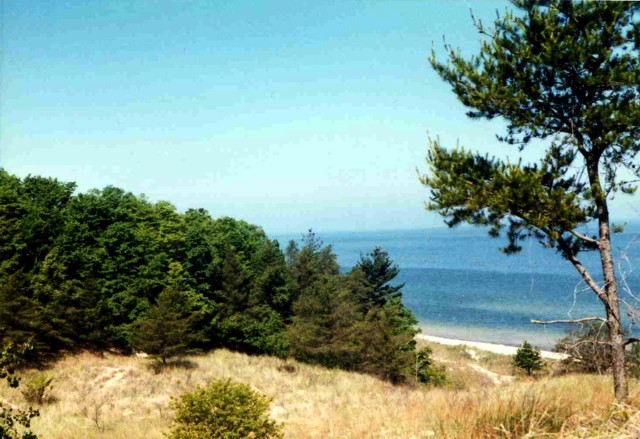 I wandered down to the beach to take pictures of the area.When I returned, the bird was still in the same area, still singing, and easily located. I climbed the steep sides of the dune (this was a struggle) and got on a level with it, about 30 feet away and about 50 feet up from the blowout floor. I watched it about 10 more minutes, and during this time it sat in one place looking about and singing. Finally it flew off to the eastern side of the easternmost blowout. As I left the area, I could still hear it singing from the other side.

At one point, during the 40 minutes that I watched this bird, I’m pretty sure I heard another one singing not too far off. The blowouts, each maybe an acre in size, were covered with tall grass and patches of bare sand. The rims were wooded with pines and deciduous trees, but I only saw the Prairie Warbler in pines.  Lake Michigan was about 50 yards away, providing a cool breeze. The bird sang constantly the entire time I was in the area, and the song, coupled with the vivid yellow color, and its habit of moving slowly among outer branches made it a very easy bird to observe. The bird and the environs were beautiful. I became pretty well acquainted with the species, its behavior, and its song. I found it at the end of a deliberate quest. This is the way birding is supposed to work.

The remainder of the day was not as satisfying. By the time I left the Prairie Warbler, most other birds had stopped singing. I heard a few Cerulean Warblers back in the tall woods, but couldn’t locate one. I planned on birding the area for the rest of the day, but somehow I wasn’t in the mood and spent the day instead exploring all the various areas of the National Lakeshore.