On our way home from Herbert Hoover National Historic Site, we saw a sign that said tractors wider than a certain width couldn’t use the road. Except it didn’t call them tractors. It called them “transported implements of husbandry,” which I thought was pretty funny.

Anyway … We stopped in Dixon to see one of Reagan’s many boyhood homes. I thought it closed at 5:00, but when we walked up to the visitor center right at 4:00, we were informed by the women there that they were locking up. The lady guide in the house was kind enough to give us a quick tour anyway. 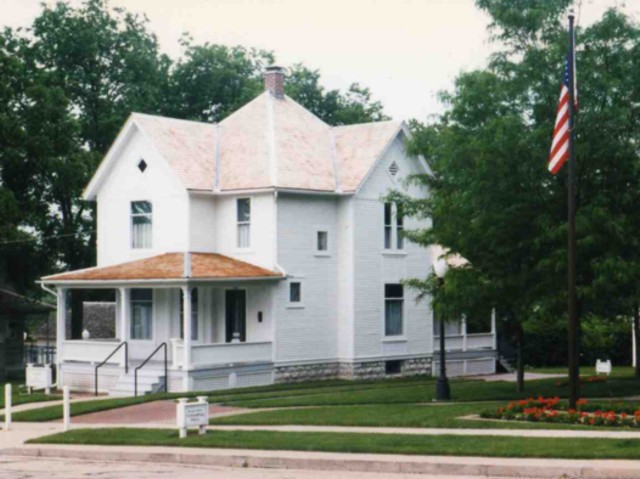 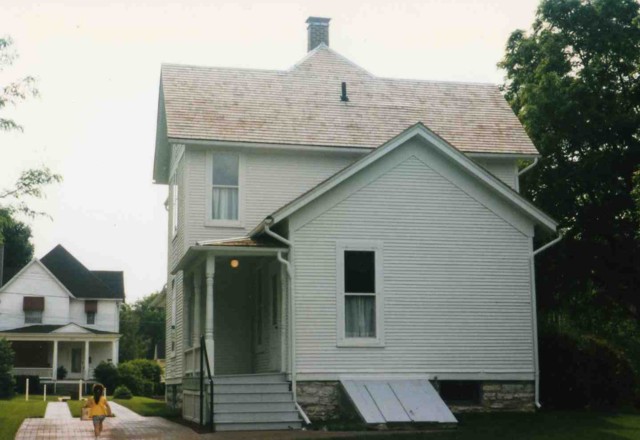 The two-story house was small, with three bedrooms and a long, narrow bathroom upstairs and a living room, dining room and kitchen downstairs. The Reagans only rented the house for three years, and none of the furniture was owned by family, but it has been restored to the “look of 1920.” Reagan’s father was a shoe salesman who moved his family to four other houses in Dixon and several others in nearby towns.

In 1984, Reagan came to town and ate dinner at the house. Both girls sat in the chair he sat in for that meal (or so we were told).

Next to the house was a small park with a statue of Reagan that shows him pointing to the palm of his hand. The plaque on the base says that he is holding kernels of corn because Illinois is an agricultural state. When I read this, I thought it was silly, but after further reflection, I still think it’s silly.