dendroica (from dendron, tree, and oikein, to dwell) dominica (of Santo Domingo)

I got up at 5:00 a.m. and drove three hours to see this bird.  As I neared the park, I played a recording of its song over and over.  I parked along Lee Creek, near the bridge, at the trail head of the Devil’s Den Trail.  Almost immediately I thought I heard a Yellow-throated Warbler singing in the trees on the slope above the creek.  I looked for it a bit, but it had stopped singing and I saw nothing.  I started across the bridge toward the trail when I heard the bird again in the same area.  I spotted it briefly in a tree right along the creek just as it flew to another tree further up the slope. 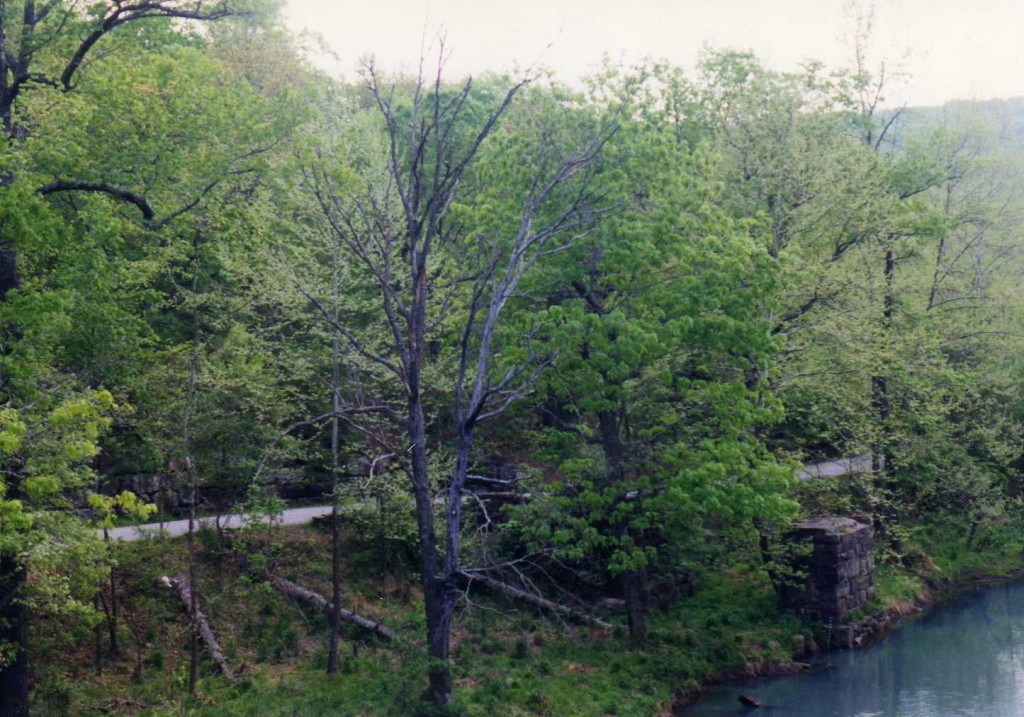 I returned to the west side of the creek and soon saw it again, high up in a sycamore.  It was flitting about, silhouetted against the sky and often behind branches and leaves.  I got a good look at the yellow throat and chest and the black streaks on the white sides.  I could tell it had a gray back, but I couldn’t see the face pattern.  It took off and flew into the woods on the other side of the creek.  I crossed the bridge and started down the path on the other side.  I soon heard the warbler again, singing high up in another sycamore about 30 yards from the creek.  I got a better look this time and saw the face pattern as it moved about.  It flew to another tree, and I followed.  I soon saw the wings bars and was satisfied, but by this time my neck was very stiff.  The bird stayed high up in the trees further up the slope from where I stood.  I lost contact with it and started walking down the trail.  Soon I saw a bird flitting swiftly through smaller trees right along the edge of the creek.  I followed it and saw it fly up to, and briefly clash with, another bird about 10 feet off the ground right in front of me.  The attacking bird flew off, but the remaining one was a Yellow-throated Warbler and this time I got about four minutes of great view as it moved around the bush in typical warbler fashion.  It finally flew off to the west side of the creek.

I continued down the trail along the creek, seeing a smattering of warblers and other birds, then climbed the stairs up the cliff and walked along the top of the ridge.  As I walked along, I happened upon one of the greatest birding moments of my life.  Immediately behind where I stood the ground was cut by a narrow gorge that dropped about 20 feet.  A blooming dogwood grew at the edge of the cut and cast its flowering branches out into space.  The creek valley stretched in front of me.  Across the way, the slopes of the tree-covered mountains glowed yellow in the sun or dark green where clouds cast their shadows.  A few feet away, several small trees grew right at the edge of the bluff.  In one tree, four Rose-breasted Grosbeaks foraged among the branches.  A pair of Baltimore Orioles perched in the very next tree.  And in the tree next to that, a male Summer Tanager was singing his little head off.  I reveled in the moment and thought, “Birding doesn’t get much better than this.”