In the morning, I had seen my lifer Yellow-throated Warbler at Devil’s Den State Park in extreme western Arkansas.  On the way back east, I stopped at Mt. Nebo State Park and saw a couple of Bewick’s Wrens.  I then headed for Holla Bend in hopes of seeing Painted Buntings and Bell’s Vireos.  I had the entire refuge to myself, but I wasn’t seeing anything except for Dickcissels and Savannah Sparrows on every other grass stalk.  I drove along slowly, looking for anything that could survive the gale of wind. 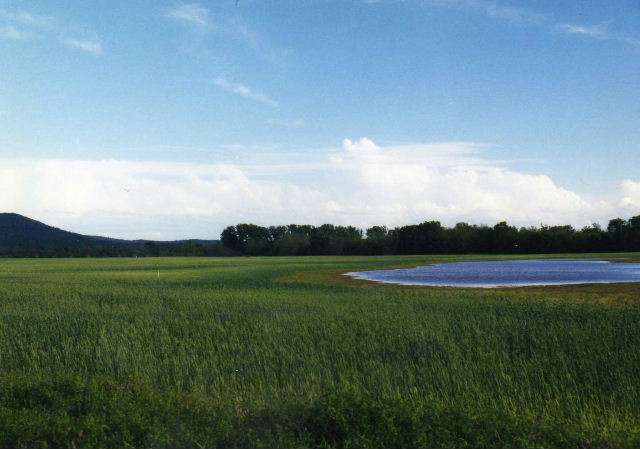 In a large field, planted with some kind of grain crop, not too far from the observation tower along the old channel, there was a large puddle.  It looked empty, but I wasn’t seeing anything anywhere else, so I stopped and looked though my scope.  A lone buffy-looking sandpiper was wandering along the muddy edge of the puddle, picking in the mud.  It looked like a peep.  I had been studying sandpipers a lot in preparation for this trip, so I looked closely to see if the wings extended beyond the tail.  It looked as though they did, and the bird seemed a bit larger and longer than the peeps I’d seen.  It didn’t act like it was about to go anywhere, so I pulled out my field guides and rechecked the marks.  I got out of the car and set up my scope.  The bird was about 75 yards away, and I couldn’t see a great deal, but I did see enough to get me excited.  I started across the field, and when I got within 40 yards, I began stopping every ten yards to check it out.  It had a buffy wash on the head and breast with streaks on the breast that did not extend onto its sides.  The wings definitely extended beyond the tail.  The head was pale, with a slightly darker patch on the cheek.  It had black legs and a black bill that seemed fairly long for the bird’s size.  I began to think Baird’s, but not being familiar with the bird, I couldn’t rule out White-rumped.

The bird was quite tame and allowed me to approach within 10 yards without paying me any attention.  When I got that close, it waded out into the water up to its breast and took off out over the puddle.  It flew past where I stood and landed behind me.  As it flew, it gave four rolling trills that I immediately tried to memorize by thinking, “breep, breep, breep — breep.”  I didn’t get a good look at its rump because it flew by too close to follow with my binoculars.  I walked back toward it and the process was repeated.  It allowed me to get about 10 yards away, waded out into waist-deep water, then took off past me giving its rolling call.  It landed about where I had flushed it from the first time.  I still couldn’t follow it enough to see the rump.  I didn’t want to bother it, but I knew by this time it was a lifer and I wasn’t about to miss it.  I followed again and the bird repeated its reaction.  On the fourth pass, I didn’t try to see it through binoculars.  With my bare eyes, I clearly saw the black rump.  I figured that I had bothered it enough, so I went back to the car.  I rechecked the books.  Earlier, I hadn’t paid any attention to its call, but now I saw that what I heard had been diagnostic.  The guide says its call is a low, rolling, “kreep,” often repeated.  The call of the White-rumped is a thin, insect-like trill, totally unlike my bird.  I watched it for a little while longer from a distance.  I had my bird, one I hadn’t expected, and one that isn’t on the Holla Bend list, although A Birder’s Guide to Arkansas says they are uncommon but regular in Arkansas in the spring.  Earlier, as I began walking toward the puddle, I saw a Lesser Yellowlegs and a Wilson’s Phalarope foraging together opposite the Baird’s Sandpiper.  When I finished with my bird, the other two were gone.  I don’t know where they went, or when.