We went to the lake primarily to look for scoters.  (We saw three with dark wings, but they were too far out to identify.)  We walked south and had just arrived by the harbor channel when a flock of 15 or so Snow Buntings flew north along the shore.  They looked like they might land, so we followed, but didn’t see them again.  We wandered back along the beach toward the harbor.  I was by the base of the cement pier when I spotted a lone gull.  It was approximately 30 yards away, out over the water.  I noticed its striking black-and-white markings immediately.  When I saw that the white triangles were in the center of the wings instead of near the tip, I began to get excited.  The bird turned and banked effortlessly in the strong wind, giving us great views from every angle.  It fluttered buoyantly about in front of us, hovering over the waves.  It dropped down and landed on the water about 40 yards in front of us for about four seconds, just long enough to fold its wings, then took off and flew south out over the lake and out of sight. 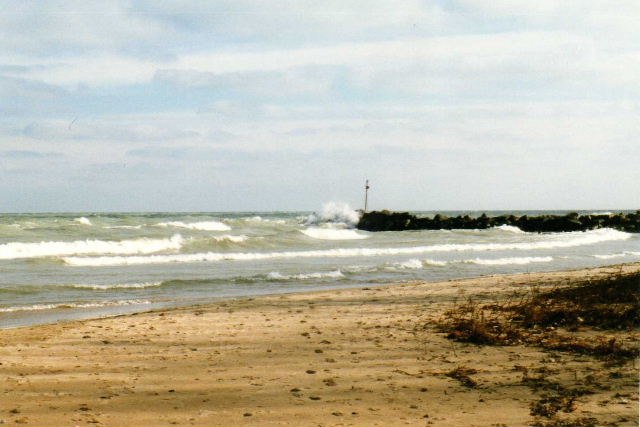 What made this sighting so ironic is that I had never studied the field marks of a Black-legged Kittiwake in my life — until the night before.  I had been leafing through Chicagoland Birds and saw that this bird was a rare fall visitor to the area.  I figured I ought to know what it looked like, just in case.

It was a beautiful gull and the rarest bird I’ve found since I saw the Varied Thrush in my backyard back in 1979.  I knew that I needed to see the black collar and looked for it right away.  That’s what got me really excited.  I began yelling to my friend, “Get on this one.  Get on this one.”  Then I began calling out the field marks we needed to see.  “Look for the black nape.  Do you see the black “M” on the back?”  I was frenetic.

We were still reveling in our luck when three more Snow Bunting flew in from out over the lake.  They flitted around the rock breakwater that forms the harbor channel as though they were about land, then flew north along the beach, passing within six feet of where we stood.