It had only been 50 minutes since I saw the Black-legged Kittiwake.  During that time I had seen my second flock of Snow Buntings for the day and three dark-winged scoters (which would have been another lifer if I could have identified them).  In other words, it had been a good hour.  We left Gillson Park and parked by the Grosse Point Lighthouse and walked south toward Northwestern.  The water department has a tiny park on the shore of the lake just south of the campus.  We stood near the shore and looked for ducks.

I spotted a large, dark gray-blue bird, flying north low over the lake close to shore.  It was north of us and soon disappeared over a breakwater out of sight.  I had seen enough to suspect it had been a Peregrine, and was lamenting my luck verbally.  About 30 seconds later, a European Starling on a nearby light post took off quickly and then we saw the falcon again.  It was heading back south, right past us, 20 yards out over the lake and maybe 15 feet above the waves.  As it passed, I got a fantastic look at the dark hood and sideburns.  It continued steadily toward campus, rose up and circled above the roof of the building just south of the fenced-in beach/dune area.  It landed on a ledge high up on the building, out of our sight.  We waited perhaps 45 seconds, yelling with excitement about our luck.  We were considering walking around and looking for it when it reappeared.  It flew high above the beach/dune area and began soaring/kiting/hovering, maintaining its position with an occasional twist or flap of its wing.  It stayed in the same place long enough for me to get it in my scope.  I should have looked at it longer, but I’m a nice guy, so I turned the scope over to my friend, and he had a good look.  It stayed there for what seemed like three or four minutes but may have been shorter.  Whatever, it was an exciting experience.  I was about to commandeer the scope again when the bird flew off out of sight over the tree line to the west. 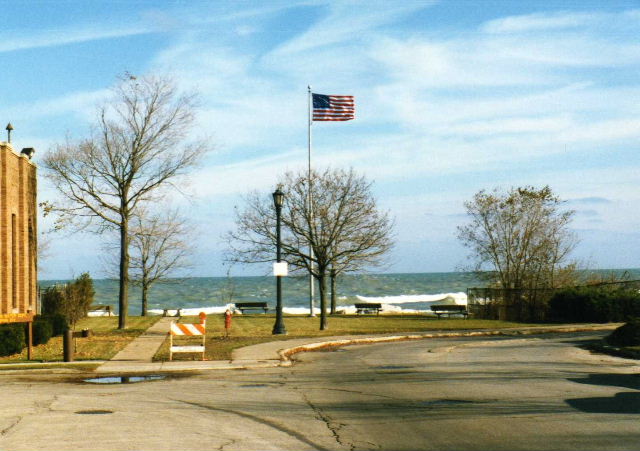 The Peregrine Falcon is a bird that I have dreamed about seeing for so long that for the rest of the day, I was constantly aware that I had seen one.  I kept saying, “You know what?  I saw a Peregrine Falcon today.”  I told him that my life had been significantly altered and that I was having to adjust to the “Post-Peregrine” part of my existence.

The morning had been exciting because the winds had been from the northeast.  As the morning wore on, the wind shifted and came from the east.  The ducks quit moving and we didn’t see much of anything as we worked our way up the shore to Highland Park.  We decided to head out to Barrington.  At Baker’s Lake and Crabtree we saw a bunch of ducks and other stuff, including three immature Northern Harriers.  We also saw an American Kestrel, setting my record for most falcon species in one day: two.  Because of our fortune in the morning, we were under no pressure to see anything good.  We relaxed, saw 51 species on the day, and had a great time.