myadestes (from myia, fly, and edestes, eater) townsendi (given in 1838 by John James Audubon for John K. Townsend, young Philadelphia ornithologist, who collected the first one known to science along the Columbia River)

I found out about this bird on Monday afternoon when I got E-mail on my computer at work from IBET (Illinois Birders Exchanging Thoughts).  It was too late in the day to do anything about it.  I went to work on Tuesday looking for an excuse.  I had a half-day of vacation, and when I heard on the hot-line that the solitaire had been seen again I decided to go for it.  I arrived at Northwestern at 1:00.  I was walking along the path between the lagoon and Lake Michigan where it had been seen.  I met another birder who was looking for it, but he soon gave up and left.  I walked back and forth along the lagoon a few times without luck.  I then wandered over near the campus library where there are several berry trees.  I saw some Cedar Waxwings, and a thin, light-gray Robin that gave me a momentary thrill.  I walked back between the lagoon and the lake to the far north end of the landfill, still without luck.  I scoped the lake for ducks and saw some fairly large rafts of mergansers and goldeneyes. I also saw a lone American Tree Sparrow in the weeds about two feet from where I stood.  I was contemplating giving up and heading for Gillson Park. 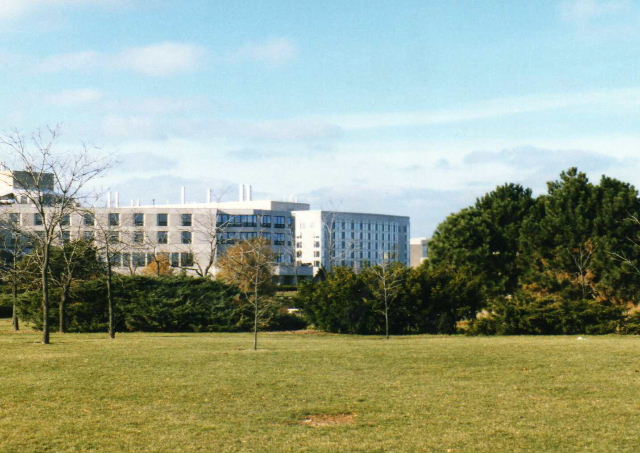 As I passed a parking lot, two birders, an older man and a woman about my age, got out of a car and asked if I’d seen the Solitaire.  I told them that I hadn’t, but had heard that it had been seen that morning.  I looked at my watch and saw that it was now 2:15.  I decided since I took off from work and come out there to see the bird, I might as well keep at it.  I walked around the lagoon, this time heading between it and the campus.  A male Kestrel was sitting in a small evergreen right next to the path.  As I stopped to look at it, it flew about 30 yards to another tree.  I walked forward slowly until it took off again.  I thought I’d flushed it, but it came right at me and landed in the weeds along the path about seven feet from where I stood.  It stayed only a couple seconds, with its wings held up above its back, then flitted back up into the tree.  I don’t know what it was going for, but it didn’t get it.  As it flew back up, I saw, for the first time (I’m ashamed to say) the row of white spots along the trailing edge of the wing.  But I digress.

I walked the length of the lagoon and started back on the lake side.  I was going pretty fast, having pretty much decided my bird had flown.  When I got to the corner where the lagoon makes a curve eastward toward the lake, I saw the older man whom I’d met in the parking lot.  He was standing with his arm pointing toward a grove of evergreens and trying to get the attention of the woman he had come with (who was 100 yards further down the shore).  As I approached, he told me where to look.  The Solitaire was sitting on the top branch of a 10-foot leafless deciduous tree in front of the evergreens, about 40 yards from the path.  It sat motionless, and the three of us stood and got great looks.  After three or four minutes, the Solitaire flew to another leafless deciduous tree and landed on a branch above a clump of low evergreen shrubs mixed with some kind of berry-bearing vine.  It sat motionless for a minute or so, then dropped down onto the evergreen, fluttering above it and grabbing at something, although we couldn’t tell what.  It wasn’t berries.  For the next few minutes, it stayed in that area, sitting on the branches or dropping down onto the shrubs.  Then it flew across a small clearing to an open grove of small deciduous trees (that still had maybe half their leaves) about 20 feet from the lake.

We walked around to the lake path and got within 40 feet of the bird.  The other two birders wandered down the lake to look for ducks.  (The solitaire wasn’t even a state bird for them.)  I kept watching the solitaire for maybe another ten minutes.  It stayed in the grove, sitting still, then flitting up or over to another branch as though grabbing something, then landing on another perch.  It was still repeating this when I left.  I got within 10 feet, and it ignored me, but I didn’t want to flush it, so I didn’t stay long.