The ABA Bird-finding Guide, A Birder’s Guide to Arkansas says that Holla Bend is a consistent location to find Ross’s Geese.  It advises to “Find a flock of Snow Geese and put your scope to work.”  So I did.  A huge flock of Snow Geese was feeding in the mowed cornfield in front of the maintenance buildings.  I got within 100 yards and began scanning.

This was not very easy.  The flock was active.  The geese were walking around and as soon as I’d concentrate on an individual goose, it would disappear into the crowd.  Single geese and small groups were constantly in the air, sometimes flying 20 feet, sometimes flying 300 yards to the other side of the flock.  Every so often a large portion of the flock would take off in waves, circle the area, then land, again in waves.  It was hard to keep any one goose in my sights for more than a few seconds.  A few Mallards were mixed in with the geese, and a small flock of Canada Geese was feeding a short distance away. 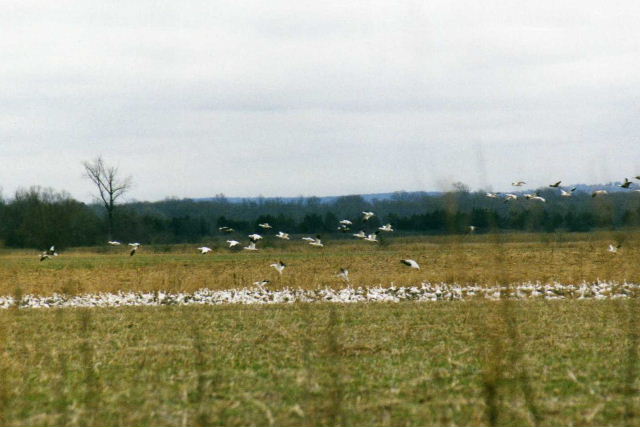 I was barely close enough to see the black grin on the Snow’s bills, so I concentrated on looking for smaller geese with rounder heads.  After about forty minutes, I spotted four geese, one white adult and three gray-white immatures that had obviously shorter necks and bills and rounder heads.  The immatures were pretty white except for some gray wash here and there and a gray area extending on a line up the back of their necks.  They were at the edge of the flock, about ten feet from the mass of birds, but a few Snow Geese were wandering about with them.  I was sure they were Ross’s, and thought I could tell that their bills lacked the grin, but I wasn’t totally satisfied.  The entire flock took off, circled and landed on the other side of the field.  I had to drive about two miles to get close.

I parked right at the head of the road to Lodge Lake looking towards the Arkansas River, out of sight behind a row of trees about a mile away.  The flock was about 70 yards away.  I opened my door but didn’t get out of the car.  I set up my scope on the ground and almost immediately picked out two adult Ross’s.  Again they were at the edge of the flock.  They were moving among the stalks of corn and among the Snow Geese, and I kept losing them and finding them again.  It was obvious that their necks were quite a bit shorter and their bills were stubbier.  The profile of the head was rounder, giving them a forehead, while the Snow’s head slanted down in a line that continued with the ridge of the bill.  I was now close enough to see clearly that they lacked the grin and I could also clearly see the blue area at the base of the bill.  I compared this with the clean orange of the Snow’s bills.

The flock wandered down into a depression out of my sight, and then flew off across the field to their original position.  About a hour later I saw the flock at rest, with many of the geese sitting and many others standing and preening.  I was again about 70 yards away, but I couldn’t find the Ross’s.  Another hour later I saw the flock flying high above the entrance road headed northwest.

I went back to the refuge on Friday, December 26.  The geese were there again.  I first spotted the flock way off in a field near the old channel.  In the late morning I came upon it again.  It was near the maintenance buildings, but on the east side of the tour road, and only about 50 yards away from me.  I sat in my car for over an hour and watched.  It was raining, and the rain was gradually turning to snow, but it didn’t bother the geese.  At first the flock was feeding actively, walking about in a field that had been mowed close and in an adjoining field that had standing stalks.  I spotted several Ross’s and saw all the field marks well, except that I didn’t see any birds either day that appeared to have warty bumps on the bill.  They kept disappearing and I have no idea how many individual Ross’s I was seeing.  The entire flock took off and circled and landed in the same area, or perhaps even a little bit closer to the car.  The geese settled down some, with many sitting and many others preening.  I found two Ross’s that happened to be the closest geese to me.  They were standing in one spot, preening.  Occasionally, one would look up and stand motionless for a minute or so.  On several of these occasions, a Snow Goose would be in the same pose just a foot or so away, giving me an opportunity to compare as though they were field guide photos.  While watching these two, I spotted five more back in the flock a little ways, so I had seven in view at once.  I think the flock of Snows on Friday was even bigger than it had been on Monday.  A very rough estimate would be 10,000 birds, but how can you tell?  To add to the effect, grazing next to the geese, and intermingled with them to some degree, was a flock of Mallards at least as large as the flock of geese.  I watched to my hearts content, and then headed off to look, unsuccessfully, for owls in the snow.