The Wisconsin hotlines have been reporting this bird since last November.  Indeed, a Barrow’s Goldeneye has been seen at this location just north of the Milwaukee County line each of the last three or four winters.  On December 12 of last year, a couple friends and I drove up to look for it.  We spent three hours in the morning scoping through the vast flocks of Common Goldeneyes, and another two hours after lunch without success.  I figured I’d missed my chance.  But the bird kept being reported, and I felt it was calling me.

One of my friends and I got to the park at 8:45 a.m.  There’s not a whole lot to the place.  It consists of maybe 10 acres of field and a row of pine trees on top of a 300-foot (I’m guessing) clay bluff that drops into Lake Michigan.  On both days, the water below the bluff was full of ducks.  In December, they were largely Common Goldeneyes.  Today, the most evident bird was the Greater Scaup.  A huge raft of them was drifting north and south along the shore.  On one occasion they were swimming in a large “V” that my friend said looked like the Star Trek logo.  Soon after we arrived, the entire flock took off and turned in unison, giving us a fantastic aerial view of several hundred white wing bars that extended nearly to the tip of the wings.  Common Goldeneyes were there too, but not nearly as many as we saw in December.  That means that there were only 400 or so in view.  And they were more spread out this time, not packed in rafts.  We scanned from the bluff near the car, then walked south and scanned at that end of the park.  In addition to the birds already mentioned, we saw a male Red-breasted Merganser, several Buffleheads, and a few Redheads.  We then walked north to the other end of the park. 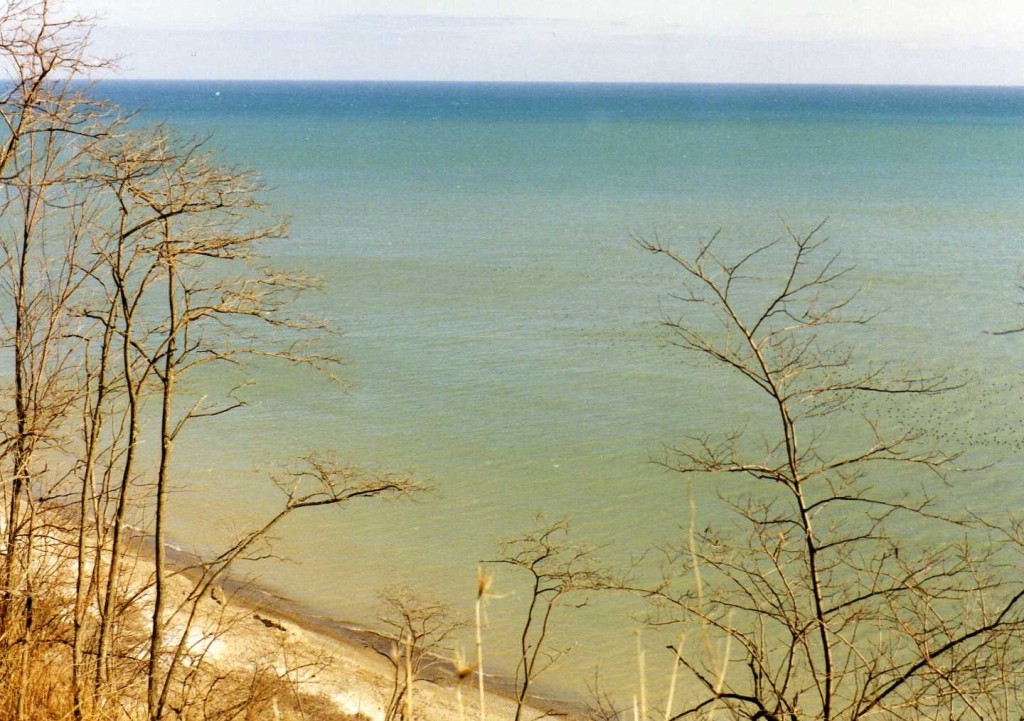 We had just arrived when I heard a flock of crows making a lot of racket.  We walked away from the lake to the edge of a large field.  The crows were gathered about the top of a large deciduous tree in the field.  I stopped and looked and immediately saw a Great Horned Owl facing away from us.  It was sitting exposed on a branch, with crows all around.  It didn’t seem bothered by them at all, but it kept turning it’s head 180 degrees and looking at us.  We didn’t want to flush it, so we stayed where we were and looked through my scope.  The owl had elongated its body so it looked pretty slender, and its ears stuck straight up at least six inches above the top of its head.  It kept an active eye all around, turning to look at the crows on both sides, then looking back at us.  Once, I saw it duck a little under a low-flying crow.  We both took good looks through the scope then left it to deal with its other problems.

This charged us up a little bit.  We scanned the many goldeneyes at the north end, and then headed back south to our original spot by the parking lot.  I started on the left and panned across, stopping at every male goldeneye and checking head shape and the degree of black on the back.  I was beginning to prepare myself for missing the Barrow’s again, but I wasn’t yet about to quit looking. In just a few minutes, I saw one that looked different.  The thing that caught my eye was a row of white spots on each side of the back.  The backs of the Commons were solid black in a rather narrow strip between white sides and wings (with a few black streaks).  This bird, however, had a much wider area of black on the back with a distinct row of white spots running along the length where the folded wing curves up onto the back.  I checked next for the shape of the white spot on the face.  In this duck, it was a crescent that curved from the front part of the cheek under the eye up the face in front of the eye.  In no place was it as wide as the round spot behind the bill in the Commons.  The duck was swimming about 80 yards out from shore in a loose raft of 25 or so male and female Commons.  As soon as I was convinced I was on something, it dove. I said, “I think I’ve got it.”  My friend, who had started to think we were going to miss it again, said, “Really?”  I still didn’t want to get excited, so I said, “I think so.”  I located it again as it came up, and concentrated on the two points I’ve already mentioned.  I said, “That’s it,” and handed the scope over.  We spent the next twenty minutes watching it and comparing it with the male Commons that were in the immediate vicinity.  At first, we didn’t notice the black line that the book says extends from the shoulder down almost to the water line, but when the bird turned and was exactly side-on to us, parallel to the shore, we could see it clearly.  We began to look for more subtle clues.  On the Commons, the head slopes upward from the bill to the crown and then angles more steeply down toward the back.  On the Barrow’s, the head juts up steeply from the base of the bill, then slopes less steeply down toward the back.  The Barrow’s also had a shorter, stubbier bill.  All these marks were very distinct, but the thing that enabled us to locate it each time it came up in the middle of the flock was the white stripes on the back.  It was too overcast for us to see any color in the head sheen.  The bird dove repeatedly, staying down for about 30 seconds each time and then swimming about for maybe a minute before diving again.

Many of the Commons were doing their courtship dance, throwing their heads back so the crown rested on the back feathers and opening their bills.  I saw the Barrow’s do this once, and my friend said he saw it also, although to him it seemed that it wasn’t as enthusiastic about it.  It seemed to be paying fairly close attention to one particular female, but as near as I could tell by bill color and shape and head shape, this was a Common.  I also saw the Barrow’s preening its breast feathers as it swam about.  During the time we watched, the huge scaup flock drifted through toward the south and they and the goldeneyes were mixed.  It was very difficult to find our bird in the mix.  The bluff was so high, and the birds were so far out, that it was almost impossible to distinguish the Barrow’s with binoculars unless we knew right where to look.  If I hadn’t had a scope, it would have been a daunting task. When we spotted the Barrow’s again, it had drifted south also, although the goldeneyes were further out than the scaup.  It passed down to an area that was blocked from our view by some trees along the edge of the bluff.  We had both gotten good views and were content.  We started home, happy as clams that we had tried again and stuck it out.