I drove the Black Point Wildlife Drive, then headed for the Haulover Canal to see a manatee. I looked for twenty minutes without success. I drove back south on State Route 3. Just south of the bridge there was an inactive roadblock that is used to close off that part of the refuge before and during shuttle launches at Cape Canaveral (visible to the south). As I passed the booth, I saw two birds perched on the wires (visible as a tiny black dot in the photo) on the east side of the road. I saw enough to get me excited, so I cut onto a rutted dirt road that paralleled Route 3 and drove back. The area was very unattractive, with bushes and small trees up to 15 feet tall.

The two birds were Scrub-Jays. They were being blown about somewhat by the wind, but were otherwise inactive. After a few minutes, one disappeared into the nearby brush, followed shortly after by the other one. I saw their gray breasts, blue wings and long blue tails, and their overall jay shape, but I wasn’t satisfied. But the neat thing about the four lifers I saw this day is that I had multiple chances at all of them. 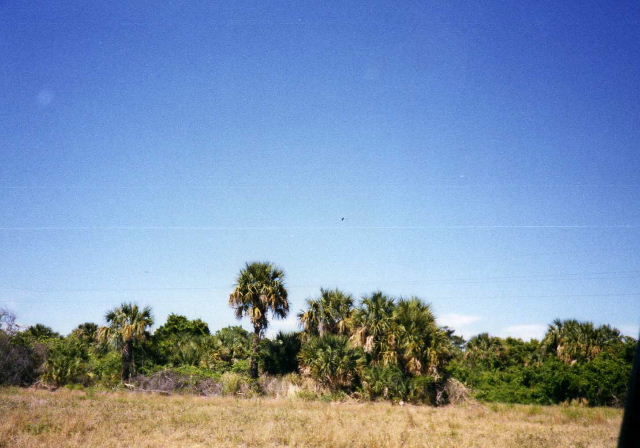 I turned east on Route 402 into Canaveral National Seashore. Immediately after passing the entrance booth, I passed a sign that read “Scrub Jay Nesting Area.” Moments later, a jay flew across the road right in front of the car and landed in a bush. Because of the proximity to the space station, stopping is illegal on that road, so I couldn’t pursue it. I spent the next hour or so near the ocean, then drove back on the same road. At about the same place where the jay had flown across, I saw a fourth one. This bird was standing in the grass right along the pavement. I couldn’t stop, but nobody was behind me so I slowed way down. I got a great look at its white throat and eye-brow and sturdy jay-like bill. The view only lasted a brief moment, but I got a perfect look from five feet away.

I had one more shot, still on Route 402, back on the refuge. But this time there was somebody behind me so, once again, I couldn’t stop. This last bird was also perched on the wire. The wind was blowing pretty hard and it was hanging almost, but not quite upside down with its tail pointing horizontally below the wire.