The only birds that breed in Northern Illinois that I hadn’t seen in my first 20 years of birding were the Eastern Screech-Owl and the Barred Owl. I’ve heard both of them on occasion, but never found one. Although this was disappointing, it had its good side. I knew that I could get a lifer anytime I went outside.

Today it happened. I got to Moraine Hills about 6:45 and walked the trail around the swamp. My major priority was exercise, and by 7:30 I had gone three-quarters of the way around. I saw a lot of birds and a very young fawn. I got to thinking about how good a place it is to bird.  But I thought that I had never seen a lifer there, and probably wouldn’t.

I was walking a stretch of path that is bordered on both sides by muddy ditches. There is a patch of scrubby woods on the east, beyond the ditch on that side. The ditch on the west side is a backwater of the Fox River, and is separated from the main channel by a muddy, wooded sheep pen. 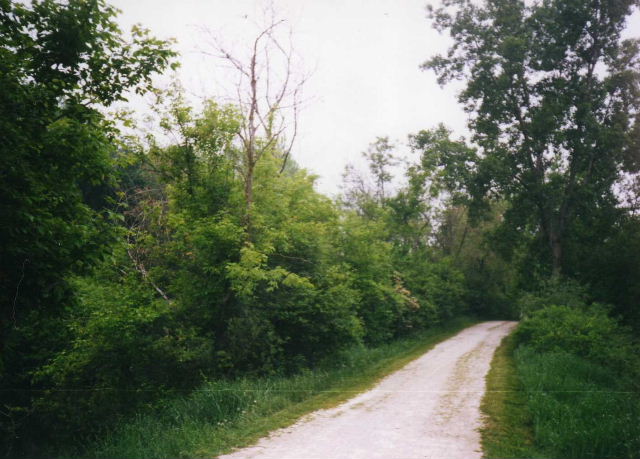 And then I saw it. No fanfare. No suspense. No challenge. A Barred Owl was perched on a horizontal branch about 12 feet up in a small tree six feet off the path. It was in plain view and looking right at me. I knew what it was the moment I saw it. I didn’t think, “Hey, a big bird.  Hey, it’s a Barred Owl.”  I thought, “Hey, it’s a Barred Owl.” I stopped about 50 feet away, and we looked at each other. As I studied it and wrote down the markings, it studied me and occasionally blinked. It was an immature.

After about four minutes, it must have decided I was harmless. It closed its eyes and looked totally relaxed. I wanted to get a look at its back, so I walked quietly and steadily along the path, passing within 15 feet of the owl. It turned its head and watch me go by. I stopped about 30 feet on the other side, and it turned its head 180 degrees to look at me.

At this point, an old guy came jogging along the path. I looked away from the owl so he wouldn’t see what I was looking at. He said hello to me and jogged on past the owl without spotting it. It spotted him, however, and turned its head and stared intently as he passed. I walked back toward it and stopped just below, about 15 feet away. It stared at me for two or three minutes, bobbing its head slightly every few seconds. It then leaned forward and let out a stream of whitewash. Immediately after, it flapped off and landed clumsily on a thin branch in a small maple on the other side of the backwater. It was perched horizontally and bobbing its head a lot more. It still looked at me for several seconds, then turned its head and looked up. I soon saw why. An American Crow flew over and landed in the top of a nearby tree. The owl pivoted its head and watched intently.  The crow gave a few desultory calls and a second one showed up. I figured they saw the owl when I flushed it. I didn’t want to give it anything more to worry about, so I walked on down the trail. I heard the crows call a few times, but there was nothing like a full-scale mobbing.

Just before its short flight, it gave out a squeaky hiss. It repeated this sound during its flight and a few times on its new perch, spaced maybe 10 seconds apart.