A few years ago, a book came out called America’s 100 Most Wanted Birds.  I didn’t buy it because it mostly listed birds that would take a year of my salary to find. But I did check it out of the library. One of the birds was the Little Gull, and the place to see it was Manitowoc, Wisconsin. That seemed easy enough. And frustrating, since I’ve been in Manitowoc twice in the last five years and didn’t know to look for it.

Anyway, we were heading up to Wisconsin for a week, and I decided to go by way of Manitowoc. After eating lunch at Culver’s on the west side of town, we got to the harbor around 2:00 p.m. The book said to look for the dredge-spoil fill containment area. I had no idea what that was. We drove along the shore a mile or so and saw many Bonaparte’s Gulls sitting on piers and pilings.  These got me excited for a few minutes, then discouraged when it occurred to me that I was going to have to sort through hundreds of very similar-looking gulls. I went back to the maritime museum and parked. My wife and daughters wandered around the park by the river mouth looking over the harbor. On the south side of the river, I saw a large black mound. I thought this might be what I was looking for, so I walked back along the river, over the bridge, and back toward the lake. Whatever that black mound was, it contained no Little Gulls or other birds. I walked back.

I noticed a large, swirling flock of gulls out past the breakwater beyond a marina, so I walked up the shore to the north to see if I could get closer. After about a mile, I passed the marina and found a breakwater leading out toward the gulls. I also discovered another parking lot right by the breakwater. Oh, well. About 100 yards out into the lake, the breakwater split. Further out toward the harbor mouth, the two sides joined again, forming a large rectangle impoundment of about five acres. Half of the area was open water and half was filled with dirt (dredge-spoil fill, I suspect). Most of the dirt was covered with a thick growth of weeds, but there was a large flat between the weeds and the water. 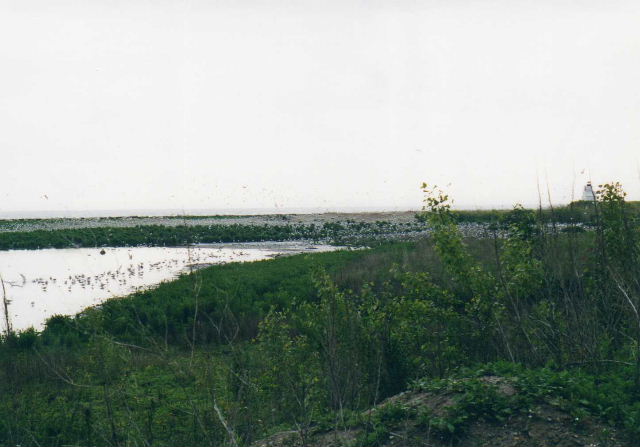 Gulls were everywhere. Most of them were Ring-bills (some with young), with about 200 Bonaparte’s mixed in. I saw at least one Herring, but I wasn’t looking very hard at the large gulls, so there were probably a lot more. I walked along the breakwater to the harbor mouth, stopping regularly to scan for Little Gulls. When I got to the far end, along the river, I could see the girls perhaps half a mile away sitting on a bench. They looked bored, and I began feeling guilty.

I started back, scanning as I went. I spotted a black-headed gull that seemed different than the many Bonaparte’s, and I soon was convinced it was a Little Gull. It was noticeably smaller and shorter-necked. The black hood came down further on the nape, so the black cut horizontally across the neck. It was walking on the mud right at the water’s edge. It was chased by a Bonaparte’s Gull and flew a short distance down the shore. I soon noticed three others, one with a black hood and two in winter plumage. They mostly walked along the shore, picking at the mud. They were often chased by Bonaparte’s. Several times they flew up and circled over the water in the north end of the impoundment. I saw one of the black-headed ones strutting with its neck extended. When they flew, I heard a piping “peepeepeep” call. All four were first-year birds. 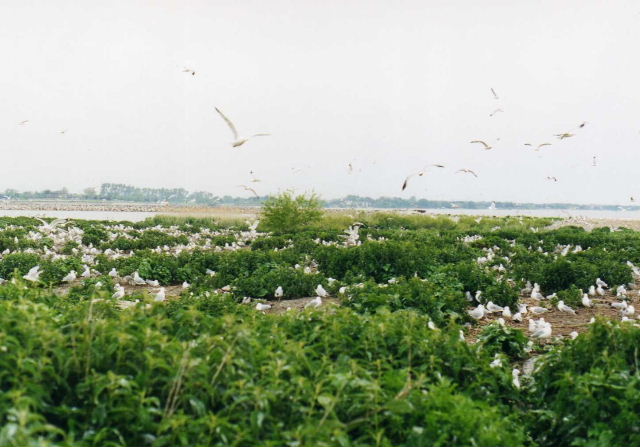