I was watching my lifer Black-headed Grosbeak on the brush-covered slope along the Bayside Trail below the lighthouse. About 20 feet from where the Grosbeak sat, I spotted another bird as it ran through the brush and hop up on a white pipe that ran along the ridge. I was expecting a California Thrasher and knew right away this was one. 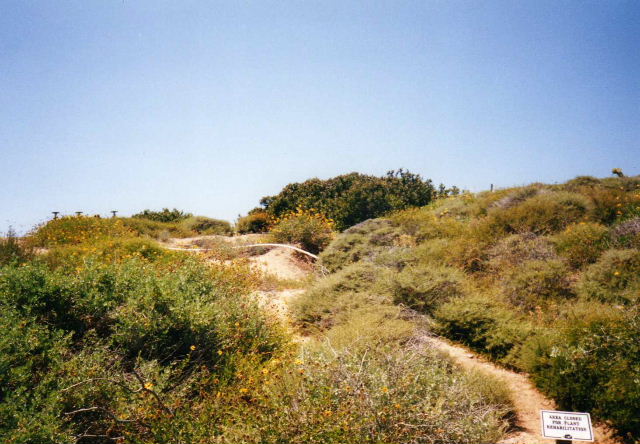 It moved fast with its long, rounded tail sticking up in the air. I had time for one brief glimpse before it disappeared behind a bush. About half an hour later, I saw two more scuffling under the bushes about halfway down the trail. Then, when I got back to where I saw the first one, I got a longer look. It perched in the top of a bush and sang a very thrasher-like song.

It wasn’t until Tuesday at Mission Trails Regional Park that I got a good long look at its face. I was standing on the deck behind the visitor center. The thrasher was just below me, about 20 feet away. It scratched a depression in the sand amongst the brush, then laid down on its belly with its wings and tail spread. The several I’d seen earlier had all been very skittish, but this one was oblivious and seemed in euphoria as it stretched out in the dirt.