calypte (hood or veil) anna (given in 1829 by French naturalist Rene Primivere Lesson, in honor of Anna, Duchess of Rivoli, wife of Prince Victor Massena)

The Bayside Trail is an incredible place to bird. On one side, a brush-covered slope slants up to the ridge with the Old Point Loma Lighthouse and the statue of Juan Rodriguez Cabrillo breaking the horizon. On the other side, far below, is San Diego Bay with the city skyline, naval bases and ships and boats of all varieties. To the south, the Pacific Ocean and its cooling breezes. 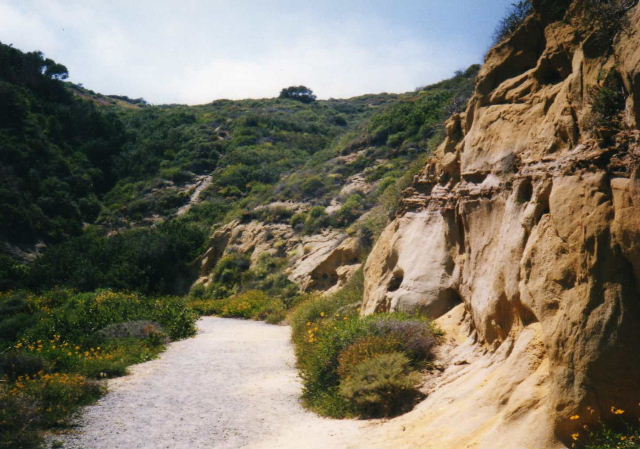 There were people on the trail, but it was not at all crowded. I’d seen several hummingbirds earlier on the walk, but they moved too fast to identify. This one was a female. It hovered around yellow and tiny red flowers on the cliff wall above us.

I saw many others during the rest of this day and the next two. At times they were swiftly chasing each other low over the foliage. At other times, I spotted one sitting motionless on a exposed twig. The entire heads of the males were iridescent pink, but usually looked dark gray if the light wasn’t exactly right.