Near the bottom of the Bayside Trail, but still about 100 feet above San Diego Bay, there was a fold in the slope that contained a patch of bushes that were thicker, greener and larger than the surrounding vegetation.

I saw a small bird that was reaching forward toward a leaf. It looked bright yellow-green, with an obvious eye-ring and prominent wing bars. At first I thought it might be a vireo. But then it sat up and assumed the normal empidonax posture. I watched it flit around in a small area for several minutes until I lost it behind some larger bushes.

Its eye-ring was wide and extended back to a point at the rear of the eye, but broken at the top. Its tail seemed long. It wasn’t singing, but the bright color, the shape of the eye-ring and its location convinced me it was a Pacific-slope Flycatcher. 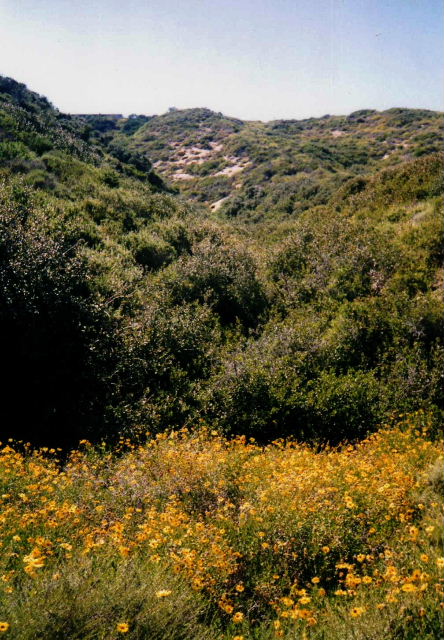