icterus (jaundice) bullockii (given in 1827 by William Swainson, British ornithologist for William Bullock, English traveler and proprietor of Bullock’s Museum in London who collected the bird near Mexico City)

I was in San Diego for three nights, but my body never adjusted to Pacific time. I woke up this (and every) morning at 5:00.  My first session didn’t begin until 9:00. I stayed in bed for a while, then showered and dressed, wandered into the nearby mall for a breakfast bagel, and still had over an hour to kill.

I grabbed my binoculars and walked across the street from the hotel to the bike path along the San Diego River. The river in this area has been restored to a natural appearance, with reeds and trees along the shore. The river is actually out of sight from the path most of the way due to the thickness of the vegetation. A row of condominiums backs up against the path on the outer side of the path. 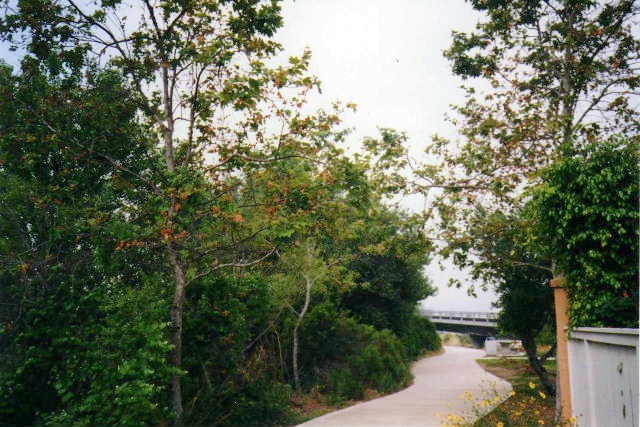 I heard a loud bird song coming from a tree next to the last condo near where the path stops and the river cuts under the highway bridge. I soon spotted a vibrant orange Bullock’s Oriole. It flew off over the road toward the hotel soon after I spotted it. I hung around the area for another half hour, and saw the bird three more times, once in the original tree and twice in trees closer to the river.

On Wednesday morning, I walked along the river again while waiting for the session to begin. This time I saw two males in a tree right along the river. They were about six inches apart, facing each other and chattering loudly. I got a brief look at another bird that I’m pretty sure was a female.