On Sunday, as we drove to Point Loma, we crossed the San Diego River about half a mile from the Pacific Ocean. I saw several mudflats in the channel, all covered with birds, the most prominent of which were Brown Pelicans. That view, along with the recommendation of one of the San Diego birders who e-mailed me, convinced me to take a closer look.

There weren’t many birds on the flats this morning, chiefly because of the many people and dogs running around on the shore and in the water on the other side of the river. A few birds were clustered on the easternmost flat, so I walked along the shore to get the sun at my back. There were six or eight Forster’s Terns on a small flat with a few Sanderlings. Two Marbled Godwits and a Willet were standing nearby in shallow water. Many Least Terns flew around and landed on a larger flat nearby. 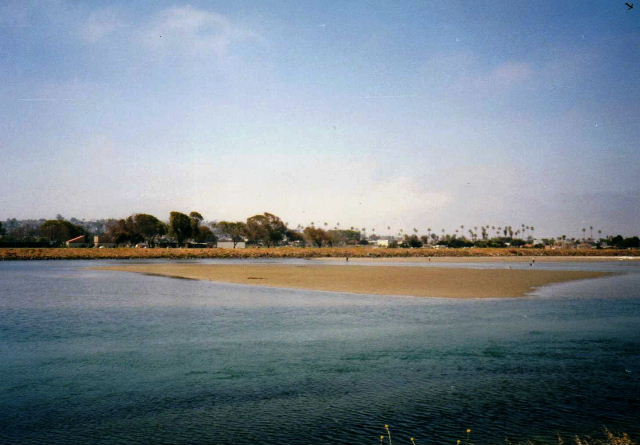 Across the way, a Whimbrel stood right next to a guy who was probing in the mud, perhaps for clams or something. I saw three terns fly east along the channel. They looked larger than the Forster’s, and their bills were more slender than a Caspian’s. I watched as they circled around and landed in the water between the two flats.

When I had convinced myself that they were Elegant Terns, I noticed a fourth one that had landed on the small mud flat just upriver. All four were standing, facing west into the breeze and toward the ocean. After I watched them for a while, two black dogs came running through the shallow water and scared them off. The terns disappeared. The shorebirds circled around and tried several times to land on the larger flat, but the dogs kept running them off.

I headed back to the hotel to be there in time for lunch.