sayornis (for Thomas Say, American entomologist who accompanied Stephen Long on his 19th-century expedition to the Rocky Mountains) saya (ditto)

I still had two and a half hours before I had to be back at the hotel. I drove over a few blocks to see if I could find a place on the other side of the marsh and discovered a visitor center. I strolled out on a trail through a field. On one side was a strip of brush and flowers, on the other a mudflat along one of the backwater channels of the river. 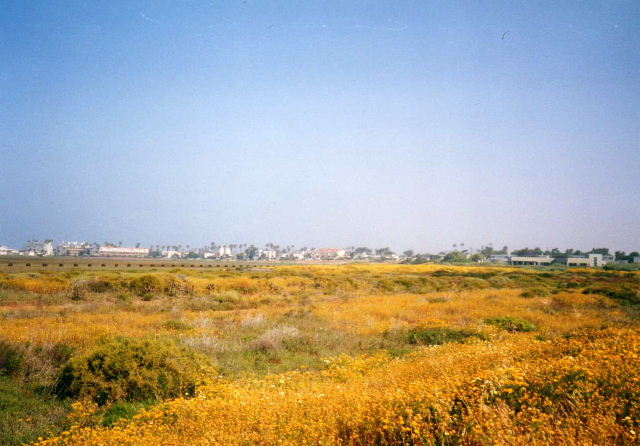 I got about 100 yards out on this trail when I noticed a woman in a tie-die T-shirt doing yoga on a bench up ahead. She was obviously communing deeply with the morning sun. I didn’t want to disturb her, so I stopped and looked around. I noticed a flycatcher perched motionlessly on top of a bush. I thought it was probably a Western Kingbird, but its tail was down in the bush out of sight. I stood and waited for it to move. Ten minutes later, I was still waiting. I was distracted by another flycatcher flitting bush to bush about 50 yards away. It was often out of sight behind the foliage. I knew it was a phoebe by its posture and tail-wagging, and I thought it was a Say’s by what I could see of its color.

And this is where it gets a bit strange. This lifer sighting was unique in one way. It’s the only time in my life I’ve seen a lifer when I didn’t realize I was seeing a lifer. I thought for sure I’d seen a Say’s Phoebe in Arizona in 1984. It wasn’t until I got home on Thursday that I found out this was my first.

When I looked back for the kingbird, it was gone. I started walking back toward the car. I looked back over my shoulder a minute later in time to see the kingbird chasing the phoebe. They both landed on the wire fence along the trail, then took off again. I got good looks at both of them as they flitted through the brush. I soon left the kingbird behind, but the phoebe kept pace with me and was soon joined by another.

When I got back to the visitor center, they were still around. They flew up under the eaves of a maintenance shed near the parking lot. I assume they had a nest there, but the area was restricted. The best look I got was when one perched on a sign about 20 feet away.

I saw another one on Tuesday. It flew out from under the eaves of the washroom by the lake at Mission Trail Regional Park and landed on the roof right in front of me.