I added this lifer at the cost of a brush with the law. I first found out about the rails via e-mail on Wednesday. I’ve never come close to seeing a King Rail and didn’t expect to see one anywhere close to home.

I entered Glacial Park shortly after 8:00 and parked up by the barn. I walked the half-mile back to the marsh along Harts Road, expecting to have to stand around for an hour or so looking for the rails. As I came up to the marsh, I heard a singing Marsh Wren. I’ve never seen one at Glacial Park, so I stopped and looked for it. I saw it, but not until later during a pause in the subsequent action. 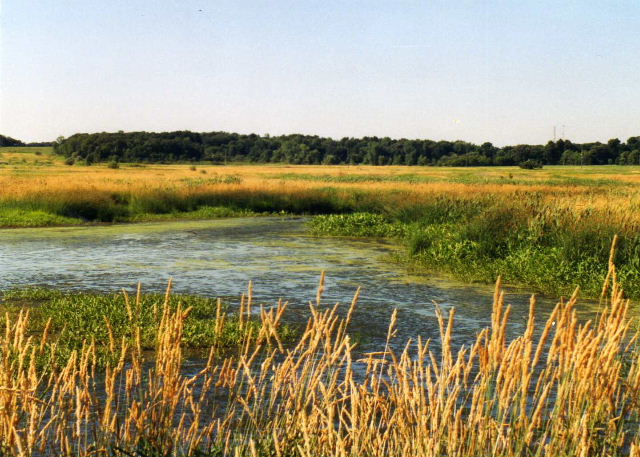 As I panned back and forth along the edge of the water, I saw a small, black downy chick running through the grass. I knew it was a King Rail chick — and followed it right to an adult. The larger bird emerged from the grass and waded out into the open. It wasn’t at all secretive as it stalked out into the pool. It wandered around for a few moments, then made a stab and came up with a snail or something. It immediately turned and strode with big steps back toward the edge. When it got within five or six feet of the grass, the chick ran out to meet it and took the thing from the parent’s bill. The chick then disappeared back into the grass and the parent headed back out for more food. As they repeated this behavior, they moved further away from me along the edge of the marsh.

After five minutes or so, I saw a second adult striding out into the pool. It appeared about where I first saw the first one. I soon discovered a second chick near this second adult. I watched the four birds until they disappeared beyond a bend in the shoreline. The entire time, they basically repeated the behavior I mentioned above. On one foray, one of the adults came up with something accompanied by a glob of green weeds. It didn’t seem to notice and walked back to its chick with the muck hanging from its bill. Another time, one of the adults was 25 feet or so out in the pool. It suddenly began running through the water toward where a small frog was skipping across the surface. The rail caught up to it and snagged it. On this trip, the adult and chick disappeared into the grass for a while. The frog was too large for the chick to eat whole, and I assume the adult ate it itself or tore it in pieces. I also saw one with what I think was a small fish.

On three or four occasions, one of the chicks would follow its adult out into the pool, staying very close to the side of the parent, even when the water got belly-deep. Once in a while, all four birds would be out of sight in the grass for a minute or so. On two occasions, I saw both chicks with the same adult, but one soon ran off to join the other adult.

While I was watching the rails, two small, spotted fawn came out of the prairie on the other side of marsh and waded into the pool about 40 yards away from me. They soon spotted me and ran back into the grass. 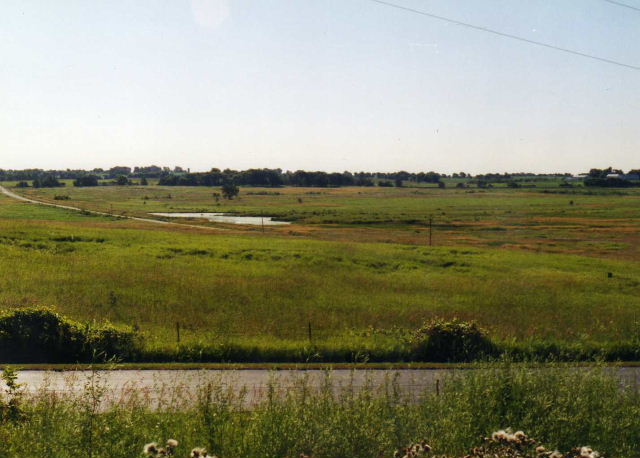 I walked back to the car and drove along Harts Road toward the entrance. I stopped near the marsh and stepped out for a minute to take a picture of the marsh. I walked about 30 yards from the car to see if I could spot the rails again. I didn’t see them and turned back. A McHenry County Conservation District Policeman was parked behind me and wrote me a warning for parking in a no parking zone. I explained to him what I was doing, but he was feeling self-important. I had to wait in my car while he checked my record and wrote out the warning.