I drove to Racine at dawn to look (unsuccessfully) for a Gyrfalcon, then drove down along the lake to Zion. Several species of gulls were recently reported from North Point Marina. I’d never been there, although it’s just north of Camp Logan, where I go frequently. Winthrop Harbor is a typical boat basin with rows of docks stretching across the basin and rock breakwaters around the edges. Thousands of gulls were standing and sitting on the docks and on the ice between, and hundreds of ducks were swimming in the open water near the harbor entrance.

I scoped out the ducks first, spotting several Redheads and, finally, a Greater Scaup in a large flock of Lessers. Two other birders were scoping the ducks in another channel, and when I wandered up, one of them pointed out a male Black Scoter. He let me look at it through his scope, and I soon found it in mine. The sun was behind it, and it was tough to see well, but there was no doubt what it was. It swam toward me, passing close to a male Northern Pintail and though a large flock of Mallards.

I asked the guy if he’d seen any unusual gulls. He said a Glaucous Gull was flying around when he arrived. We walked back along the harbor shore away from the lake. He pointed out a group of about 200 gulls standing on the ice between two piers. We set up our scopes and scanned the flock. After about five minutes, I spotted the Glaucous Gull about 30 yards away. 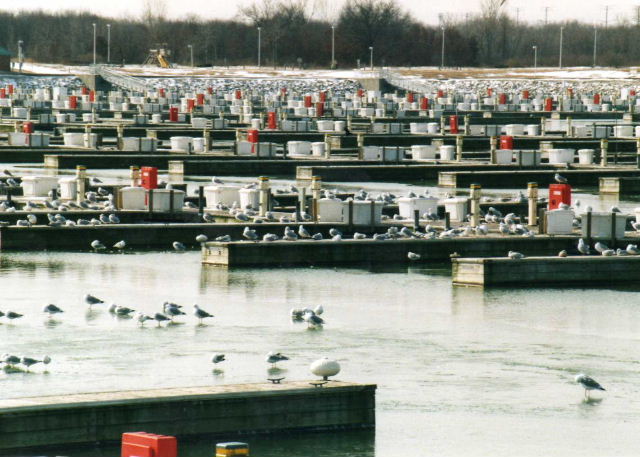 It was standing on the ice doing very little. For the half hour I was there, it sat down on the ice once for about five minutes, turned around once, but otherwise pretty much just stared at its feet. I’m pretty sure it’s the gull just above the marshmallow-looking thing on the end of the dock.

When the other birder spotted a Iceland Gull, I transferred my attention to it. I periodically looked back at the Glaucous, but it wasn’t doing anything. At one point, I had both lifers in my binoculars at once.