nucifraga (from nucis, nut, and frangere, to break) columbiana (of the Columbia River)

I went to Colorado Springs for a convention. A coworker and I flew out a day early so we could go white-water rafting through the Royal Gorge on the Arkansas River. We set off around 9:30 and paddled through Bighorn Sheep Canyon in the morning before stopping for lunch at the Parkdale landing. The river was low, and although the rapids were frequent, they weren’t particularly challenging. I had plenty of time to watch the banks of the river for animals and birds. Soon after lunch we entered the Royal Gorge. The canyon walls gradually got higher and closer as we progressed. Soon after entering the canyon, we drifted down a quiet stretch. I noticed a medium-size bird fly across the river and land in a lone pine growing close to the south bank. I had to wait until we got close since I didn’t have my binoculars, but I knew it was something interesting. 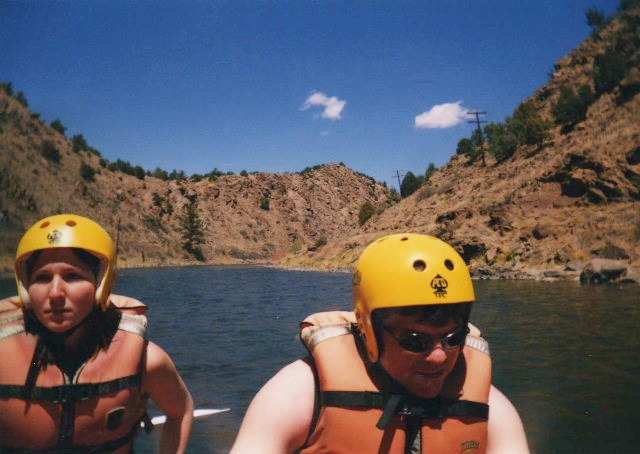 There were five Nutcrackers in the tree. They hopped branch to branch and called their hoarse calls. One flew down to a rock at the edge of the water then back up into the tree when we got close. We drifted past fast, so I wasn’t able to study them long. They were gray with black wings. Their bills were long, straight and black. Their short tails were black with broad white edges.

The next morning I drove west from Colorado Springs to Florissant Fossil Beds National Monument and saw several more. They were flying around an open grove of pines on a knoll in a meadow. At one point, four of them gathered on a branch in a dead pine. Two of them were putting on a display, bobbing up and down on the branch with their wings and tails spread. This gave me a good look at the large rectangular white patches on the trailing edge of their wings. I soon got to know their raucous calls.