I was watching specifically for this bird. I knew the raft trip would be my best chance to see it. So I was ready when I saw the first one as it flew low and rapidly from the right bank in front of and then to the left of the raft, disappearing upriver. 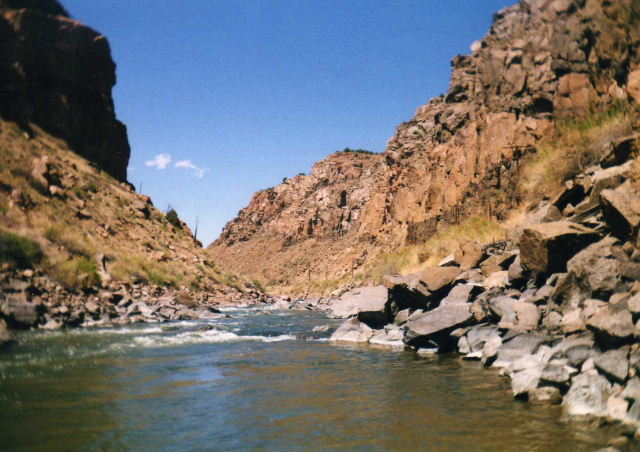 All of the Dippers I saw on the trip were in the Royal Gorge and all but one were doing the same thing the first one was — flying upstream past the raft. The one I saw best was flying downstream in front of the raft close to the narrows where the canyon is deepest. I saw where it landed and kept watching as we drifted closer. It was standing on a rock at the waters edge, dipping its entire body up and down. When we were about 20 feet away, it jumped down into the water and swam belly-deep for about two feet to another rock. It then flew downriver again, landing briefly on a flat rock under a overhanging boulder before flying downstream out of sight.

It was a plump bird with long legs and a very short tail. Its body was dark slate gray and its head was dark flat brown. It flew with very rapid wingbeats, and I never saw one more than two feet above the river surface.