I returned to my desk at work after lunch and found this IBET e-mail waiting for me:

There is a Fork-tailed Flycatcher at Paul Douglas F.P. It is a female type bird. Exit I-90 at Roselle Road, go north and take left on Central. Parking lot is on the right past Ela Road. If you walk northwest the bird was in the big meadow northwest of the pond.

I had tried for a Fork-tailed Flycatcher in southern Wisconsin in the fall of 2000 with no luck. I knew I wouldn’t get many chances, and this one was only five miles away from work. I walked over to my boss’s office, but he wasn’t in. I went back to my office and forwarded him the above e-mail with this addition:

I’m really sorry about this, but this bird usually doesn’t come north of SOUTH AMERICA. I’ll be back as soon as I can and I’ll get my work done. I promise. (He later told me he filed this e-mail away as one of the most interesting he’s ever received.)

When I got to the forest preserve, I saw another birder in the lot and stopped long enough to ask if I was in the right place. He pointed out a large copse of trees and said the flycatcher was just beyond it — he’d just seen it. He said I couldn’t miss it because there was already a trail worn in the grass from birders headed that way. I walked the half mile or so to the spot he indicated and found three people watching the bird. It was easy to spot as it flew back and forth from low perch to low perch in the prairie-like field. I saw it land on tiny bushes and on stalks of reeds. Occasionally it would fly down to the ground for a second or so but usually its flight was more horizontal and appeared to be in pursuit of insects. I’m pretty sure one of its dashes was in pursuit of a Cabbage White butterfly, but it didn’t come close to catching it. When the flycatcher perched, it sometimes wagged its tail, but I think this was to keep its balance in the breeze rather than habit. During the time I watched, it kept within an area of perhaps an acre. I was probably 35 yards away from it at its closest point.

While I was there, several other birders came and went, and more were arriving as I left. I was back at work within an hour.

This picture was taken by another birder. I down-loaded it off the Internet, but this is the very bird I saw. 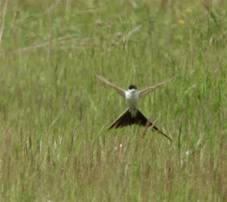