I had a mid-afternoon flight home. I wasn’t about to sit around my hotel for eight hours, so I decided to head for the coast to get in a few more hours of birding. Crystal Cove State Park, in Orange County, seemed like the best bet. I could avoid driving through the worst of the congestion and, while it would take me two hours to get there in morning traffic, it would only take an hour to get back at midday. And there were two lifers that were listed as common on the park bird list — California Quail and Wandering Tattler.

I parked near the Crystal Cove Beach Cottages and walked south along the beach for about a mile. It was high tide and in a few places there was very little room between the surf and the bluff. I was able to walk right up to several species of shorebirds, but saw no Tattlers. When I got to the end of the park, I could walk back the way I’d just come and, probably, see all the same birds, or I could climb the trail to the top of the bluff and walk back along the edge. I opted for the latter.

The morning had been foggy and gray, but by this time the sun was out and the view was spectacular.

I’d been seeing Anna’s Hummingbirds everywhere I’d been birding, and I was seeing a lot of them here too. When I spotted a tiny bird in a bush right at the edge of the bluff, I assumed it was another Anna’s. It wasn’t. It was a male Allen’s Hummingbird. It perched cooperatively facing away from me while I got a good look, then turned around and gave me a good view from the front. It was about 20 yards away from the path and my camera kept focusing on the bush in front of it, so my photos aren’t very sharp. 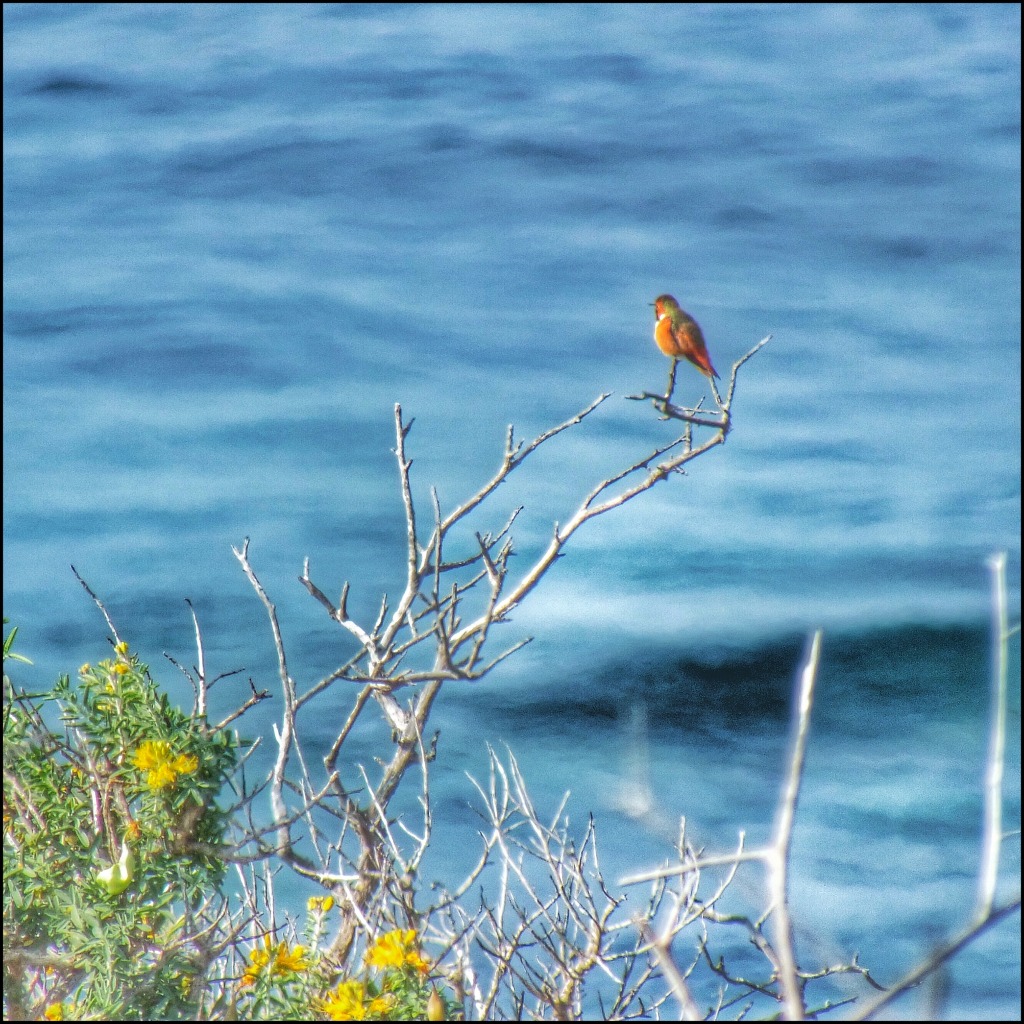 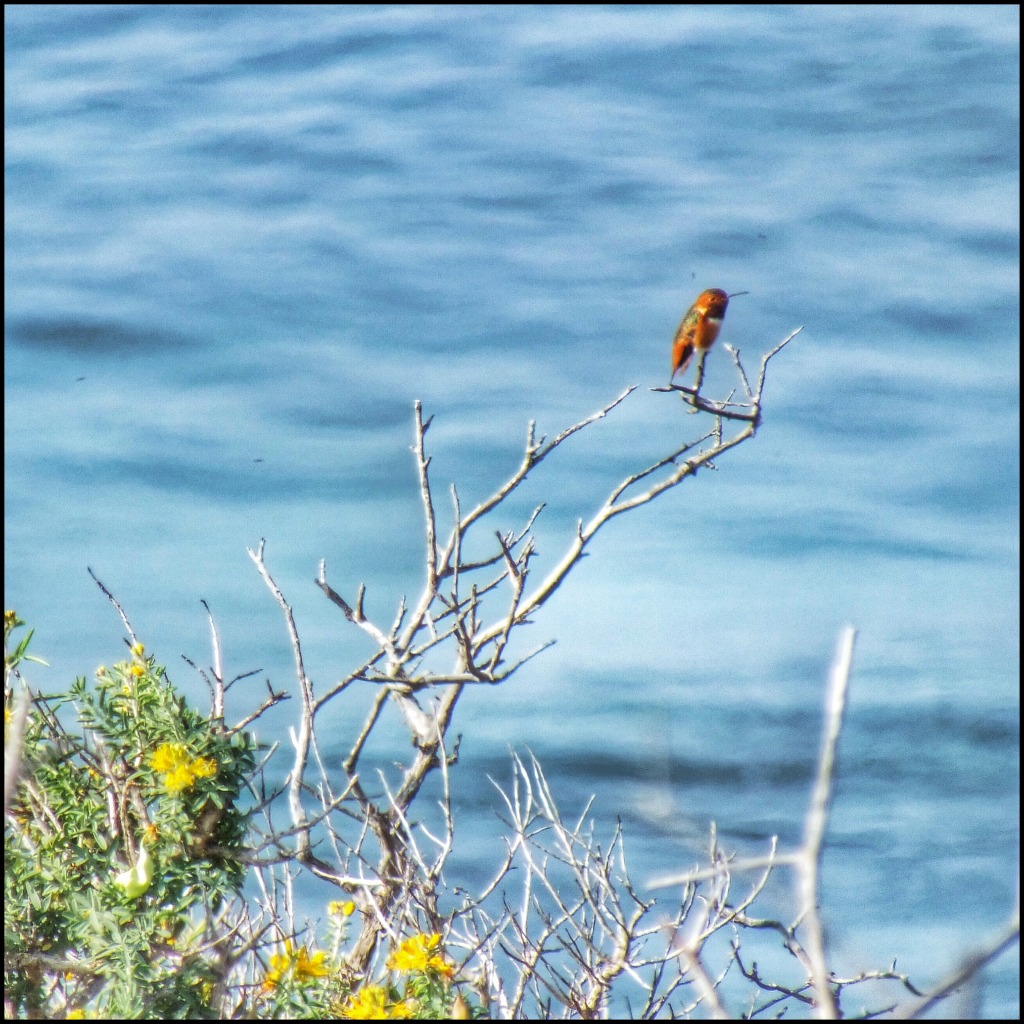 It sat there for about five minutes. You can see it in the lower left corner of this photo I took of Brown Pelicans flying by. 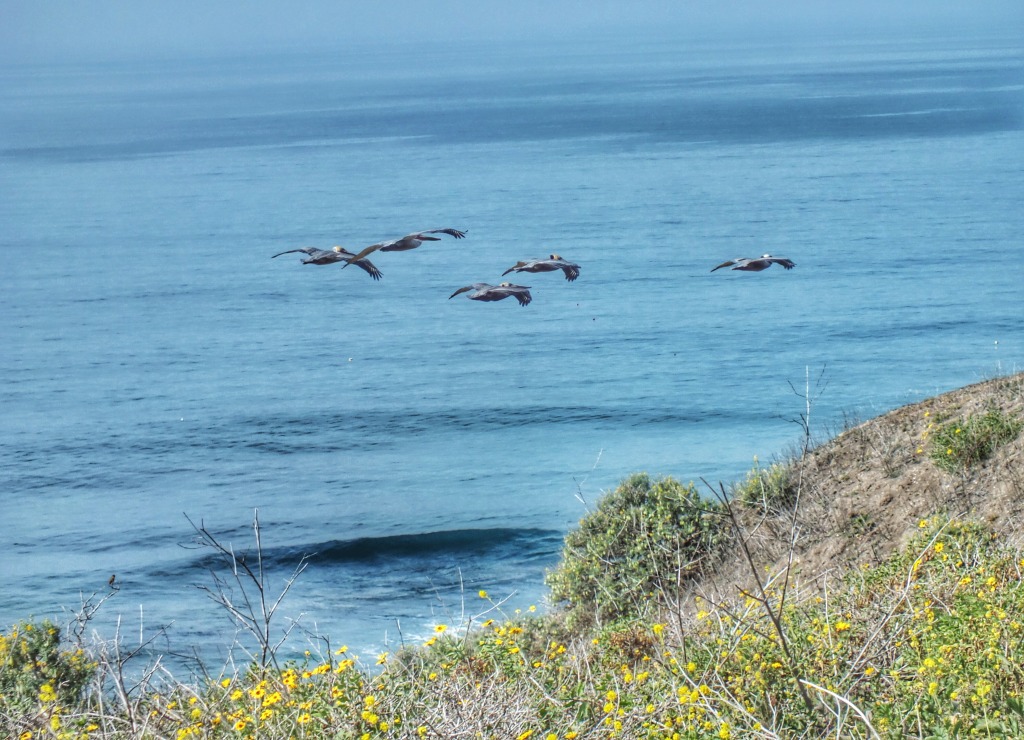 It’s a little embarrassing to admit that, after I identified it, I wasn’t sure if I’d seen one before. But a check of my list convinced me I had another, unexpected, lifer.