In 1987, there were only 22 wild California Condors in the world, all of them in California in the mountains around Los Angeles. With the species on the brink of extinction, the U.S. Fish and Wildlife Service decided to capture all of them. Through captive breeding programs, the population slowly grew. Beginning in 1992, condors were released back into the wild in four or five locations, including Vermilion Cliffs National Monument in northern Arizona.

As of last Wednesday, there are 92 condors in the Arizona/Utah population. Pairs have formed and bred, and there are even second-generation condors in the “wild.” But all of them are numbered and radio-tagged and monitored. Each bird is captured once a year and tested for lead poisoning (from lead shot used by hunters and ingested by the birds when they eat dead animals). If evidence of lead is found, the birds are given something that causes the lead to concentrate so it can be gotten rid of by defecation. So, they’re really only wild in the sense that they are free-flying. The population won’t be self-sustaining for a long time—probably not until after lead shot is no longer used.

We drove from St. Charles, Utah to Moab, Utah by way of northern Arizona. The Vermilion Cliffs rise up from the flats not far from the Kaibab Plateau about 60 miles north of the Grand Canyon. We drove on a dirt road west of the cliffs until we came to a shelter and a sign with the outline of a condor on it. 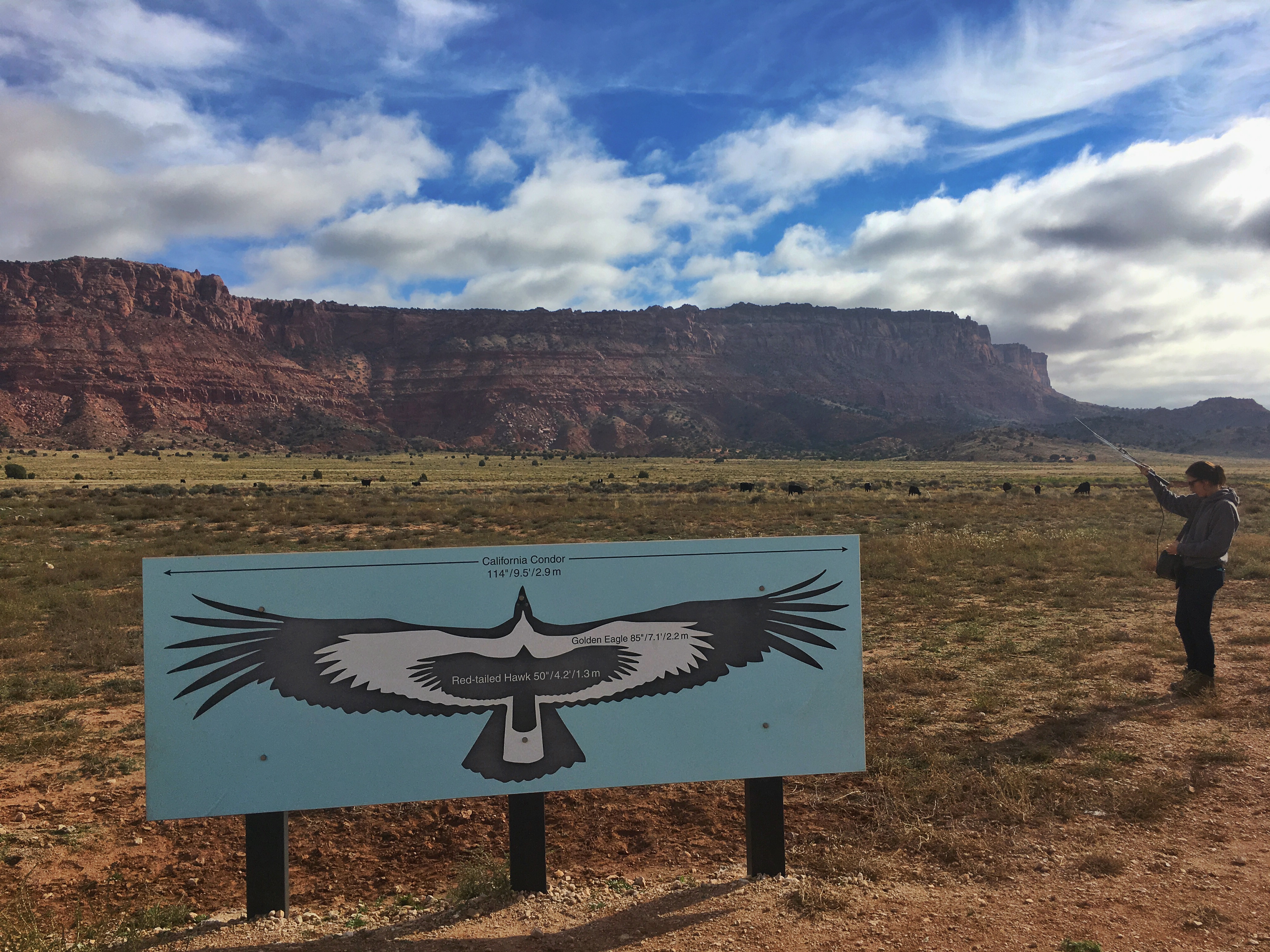 We arrived mid-morning, when the chances of seeing the birds is supposed to be the best. We had the place to ourselves for a few minutes, and I managed to find and identify one condor sailing over the cliffs. A short time later, a young woman showed up and set up a scope. She was a member of the team that monitors the condors. She was happy to explain all about them to me and to the other birders who arrived a short time later. In the photo above, she’s tracking one of the birds with an antennae. Among other things, she told me that four young birds had just been released the day before.

I’m not sure how many condors I saw in the half hour we stuck around. All of them were a long way off near the top of the cliffs. At least four were perched on the rocks. The white patches are the numbers each bird wears on its wing. From time to time, condors would circle above the cliffs or along the face. 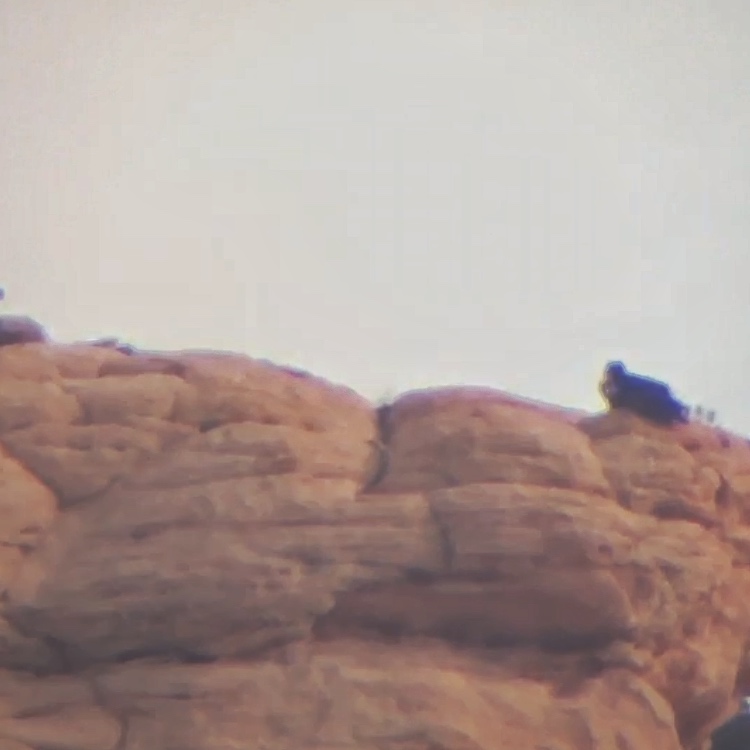 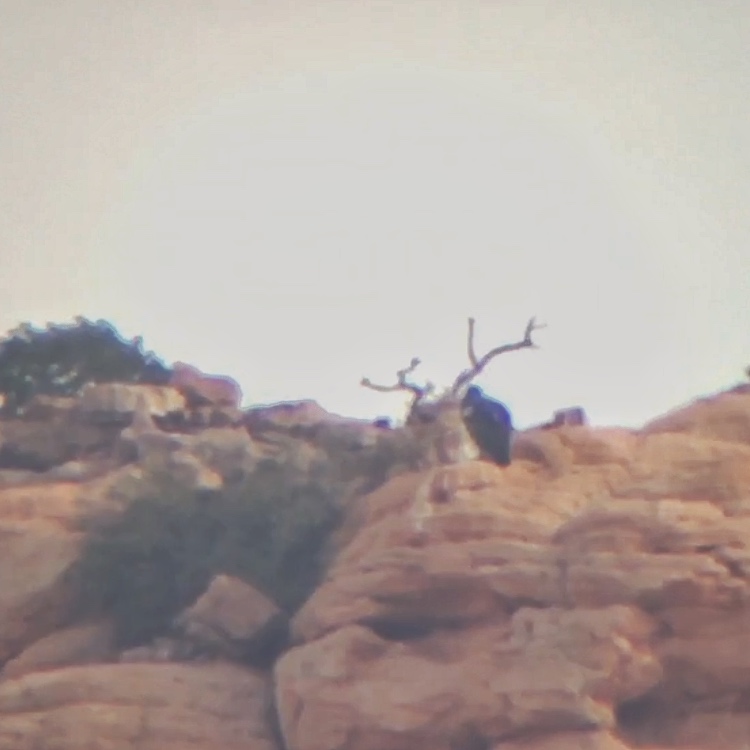 In this next shot, you can see two perched birds on the right and a flying bird on the left. The shed-like structure in the middle of the photo (visible if you enlarge it) is the location of the release. The birds are placed in there and left for a few days to acclimate them to the area. Then the door is opened, allowing them to leave when they wish. 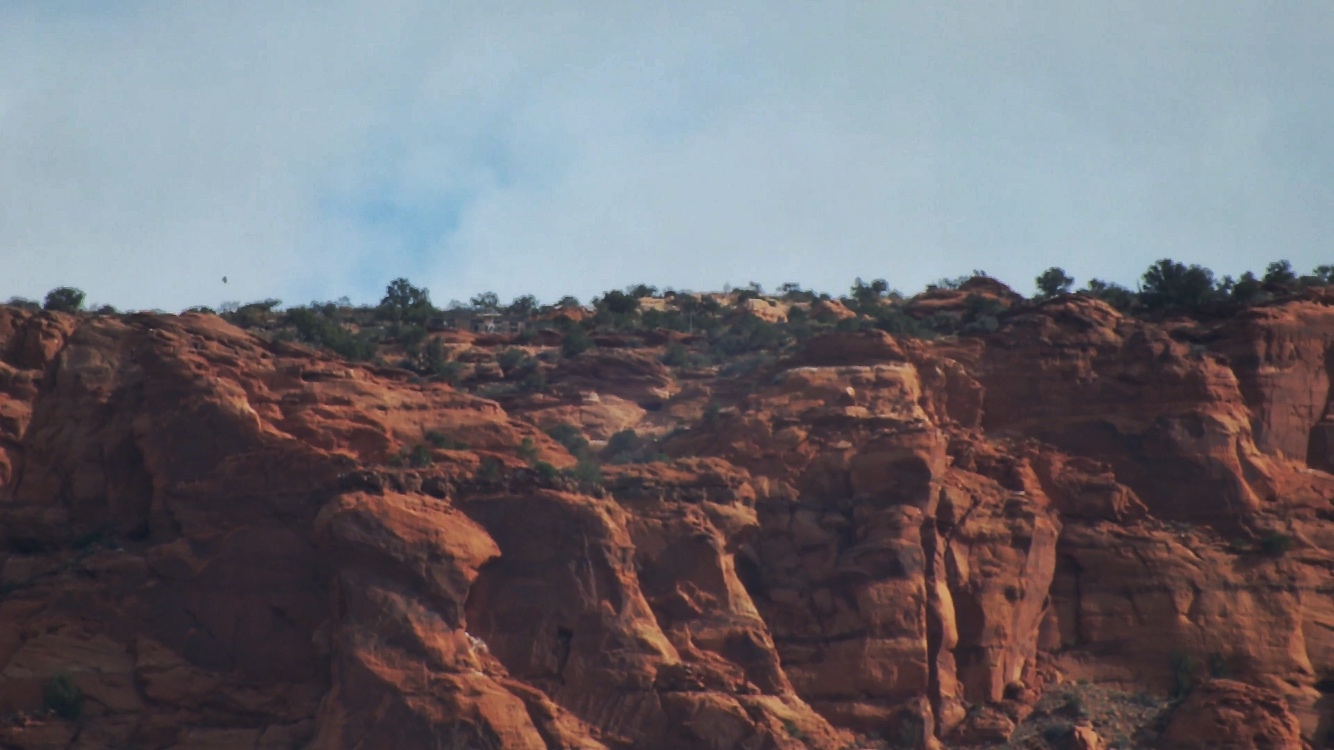 When they flew above the cliffs, they appeared as just a silhouette. 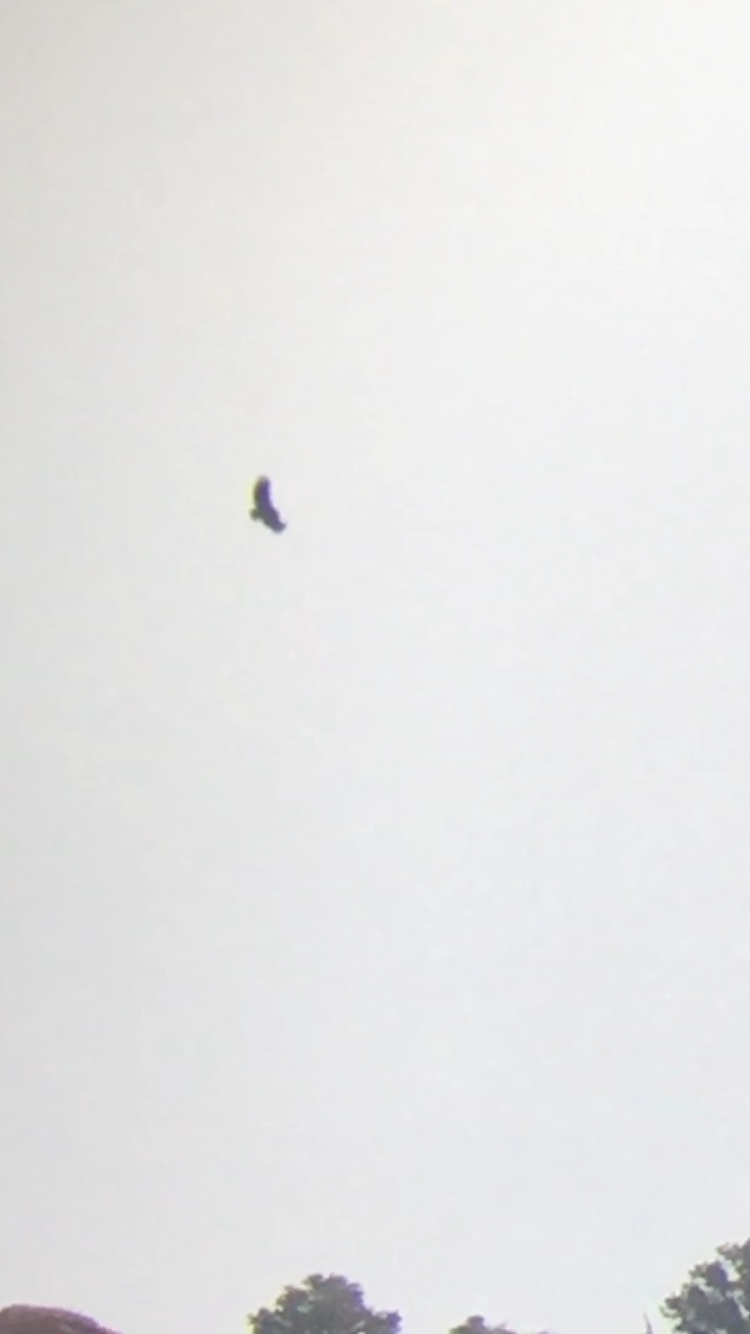 On this next picture, captured from the video below, I like to pretend I can get a hint of the white under-wing triangles when I enlarge it. 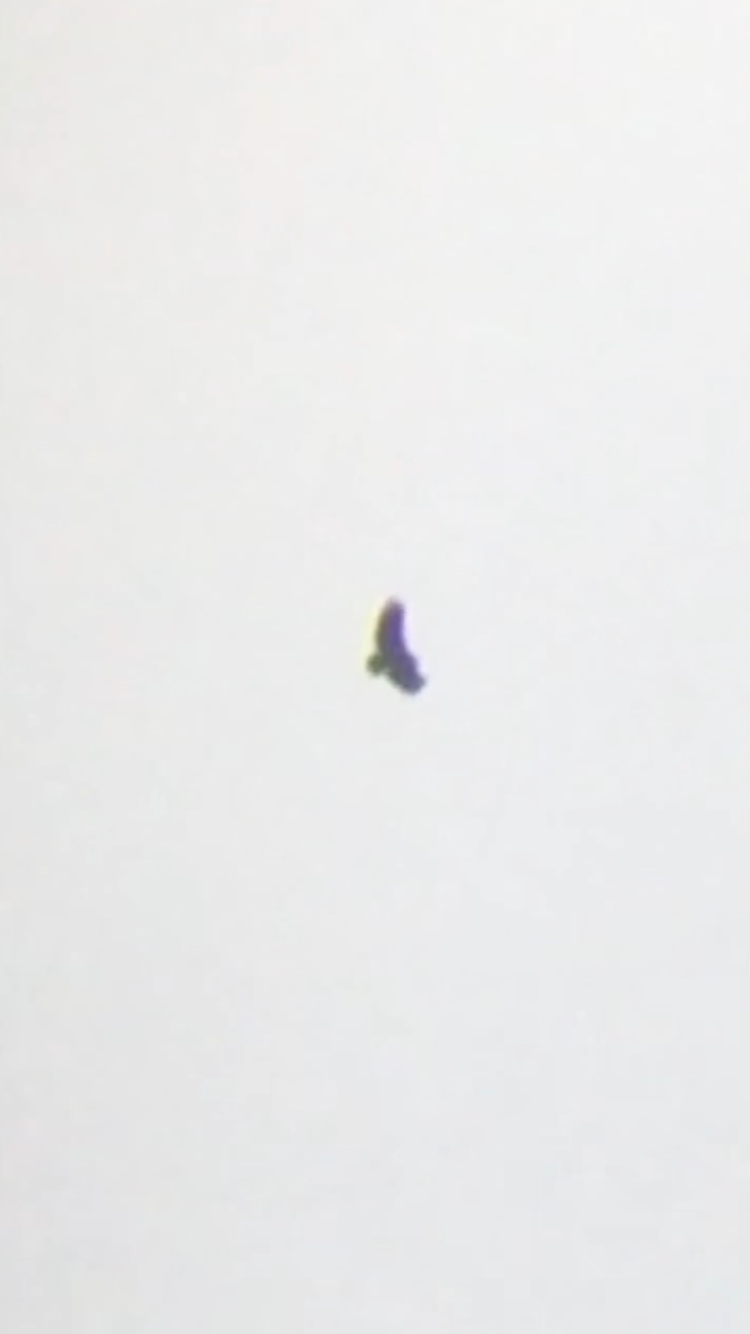 On two occasions, when I spotted adults soaring below the cliff line, I could see the large white triangles on the undersides of the wings. But try as I might, I couldn’t get one on video.

I could see the condors with the naked eye, but they were so far away, that the ravens soaring in the same area couldn’t be seen except with binoculars. The condors dwarfed the ravens. Besides the white triangles, I could see their short tails and their long wings with the outer feathers splayed like fingers. But the best clue to identification was simply the size. Even at that distance, I could see they were huge—especially when seen near the ravens.

I would have loved to have seen them better. During some parts of the years, several have taken to roosting on the girders of the Navajo Bridge over the Colorado River. They even land on the bridge railings occasionally, and the monitors have to chase them away so they don’t become too acclimated to humans.  The bridge is about 10 miles from the cliffs. We stopped, and I looked, but no birds were by the bridge this day.

Still, considering how close to extinction they came, the fact that I saw them at all is pretty spectacular.