dryocopus (from drus, tree, and kopos, beating)  martius (name for a woodpecker with a tufted crest)

This bird was also on my “boy I hope I see one of those in Europe” list. When I was looking at the Gray-headed Woodpecker on Sunday, I heard another bird that I thought must be this one because its calls sounded like a large woodpecker.

I heard the calls again on this walk and was keeping my eyes open. There was a section of forest that had been cut and planted with new trees. They were very short, giving me a long view over the woods on the far side. The top of a dead pine poked above the leaves, and I could see a black “lump” near the top. One look through my binoculars convinced me I was looking at a Black Woodpecker. Which surprised me. I expected it to be the size of a Pileated Woodpecker. The field guide says it’s even a couple inches larger than a Pileated. But it sure didn’t “look” any larger than a flicker from where I stood. Perhaps there was a trick of perspective and the pine was much further away than it appeared. 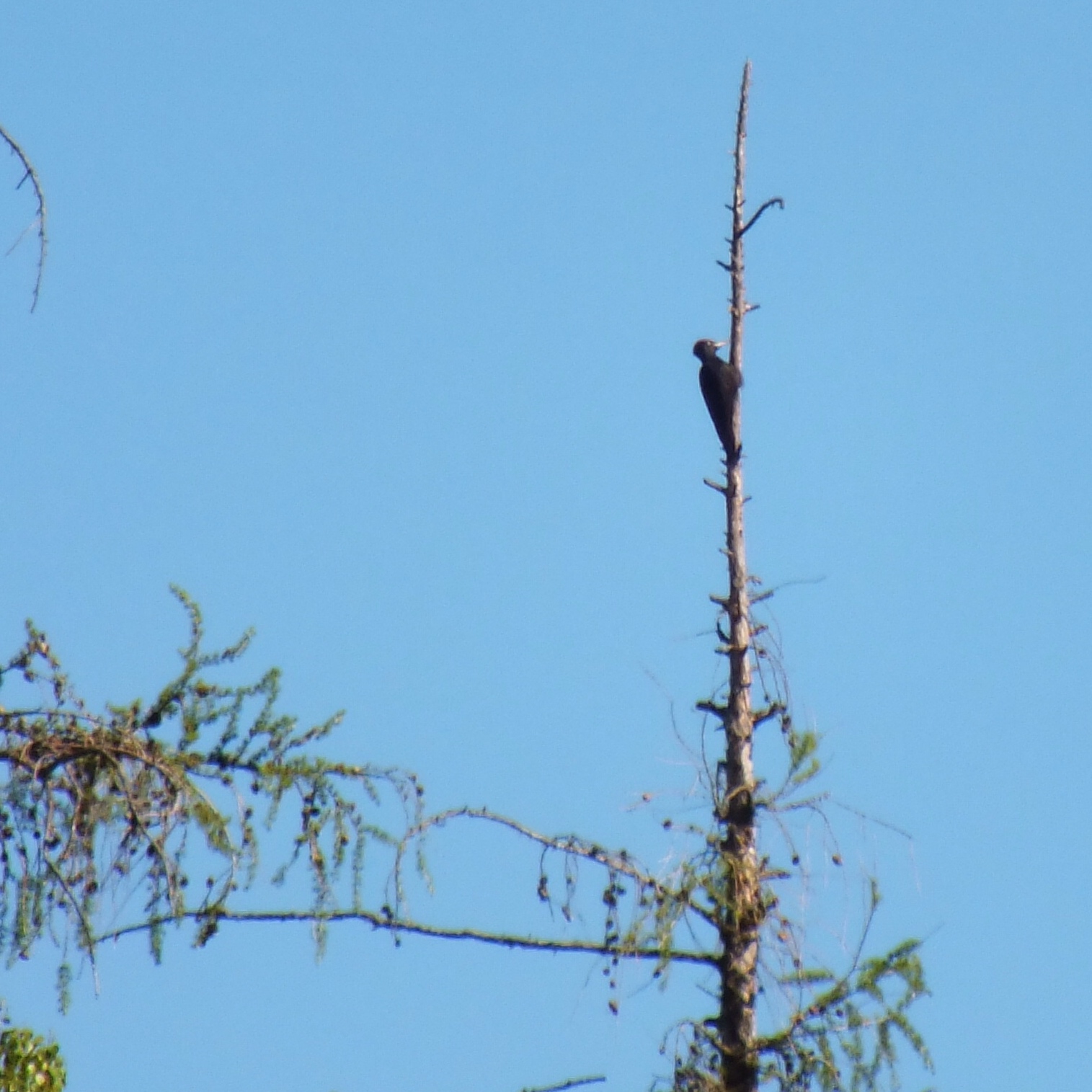 Anyway, through my binoculars, I could see an all-black woodpecker with a red cap, a white eye, and a pale bill. It stayed where it was for several minutes while I watched. It did nothing but look around, call occasionally, and flap its wings a few times.

As I got closer, it was hidden by the taller trees. I never could find the particular tree it was in from any other angle, and I didn’t see the woodpecker again. 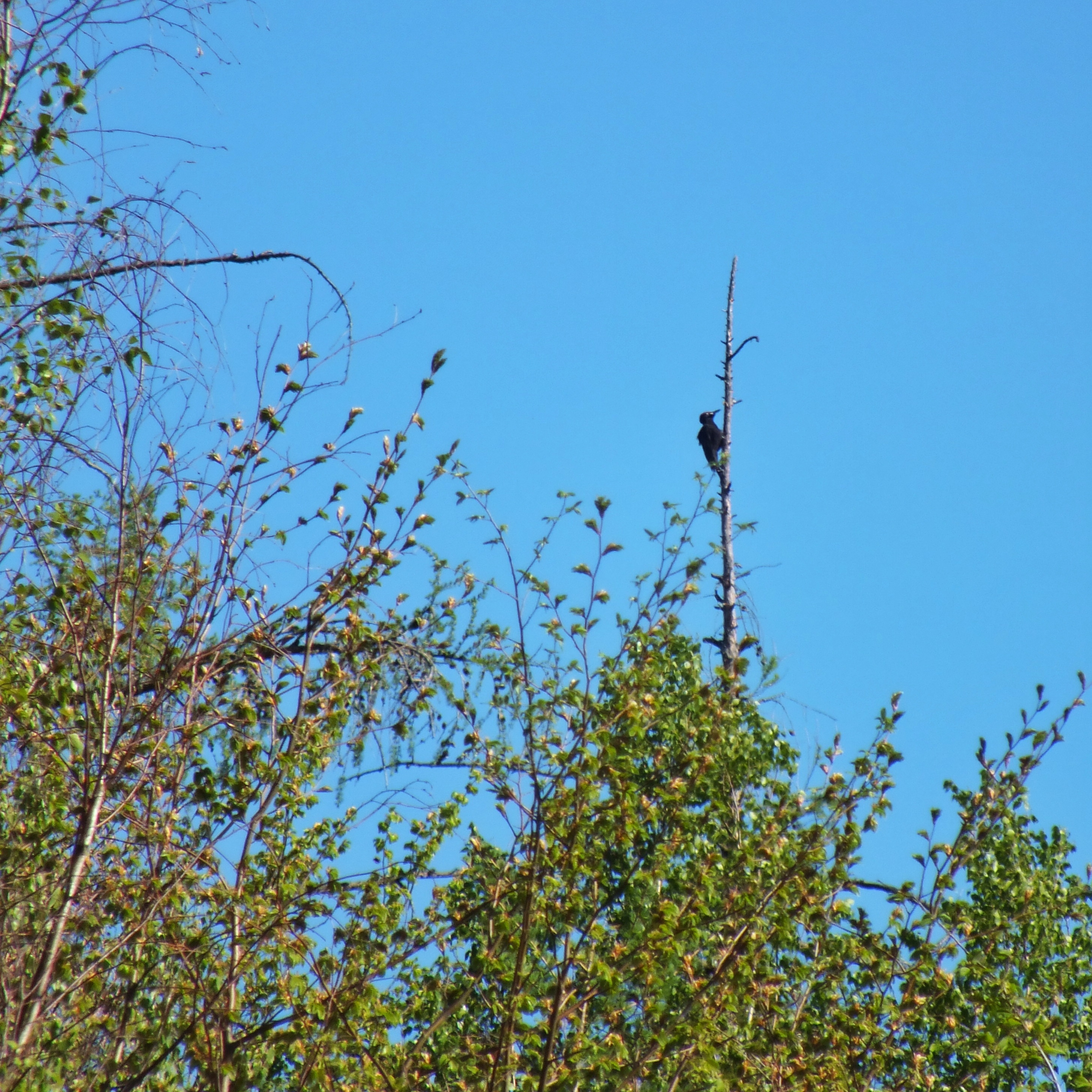 The bird is blurry in this next photo, but I include it because its the only shot that shows the full red cap of the male Black Woodpecker. 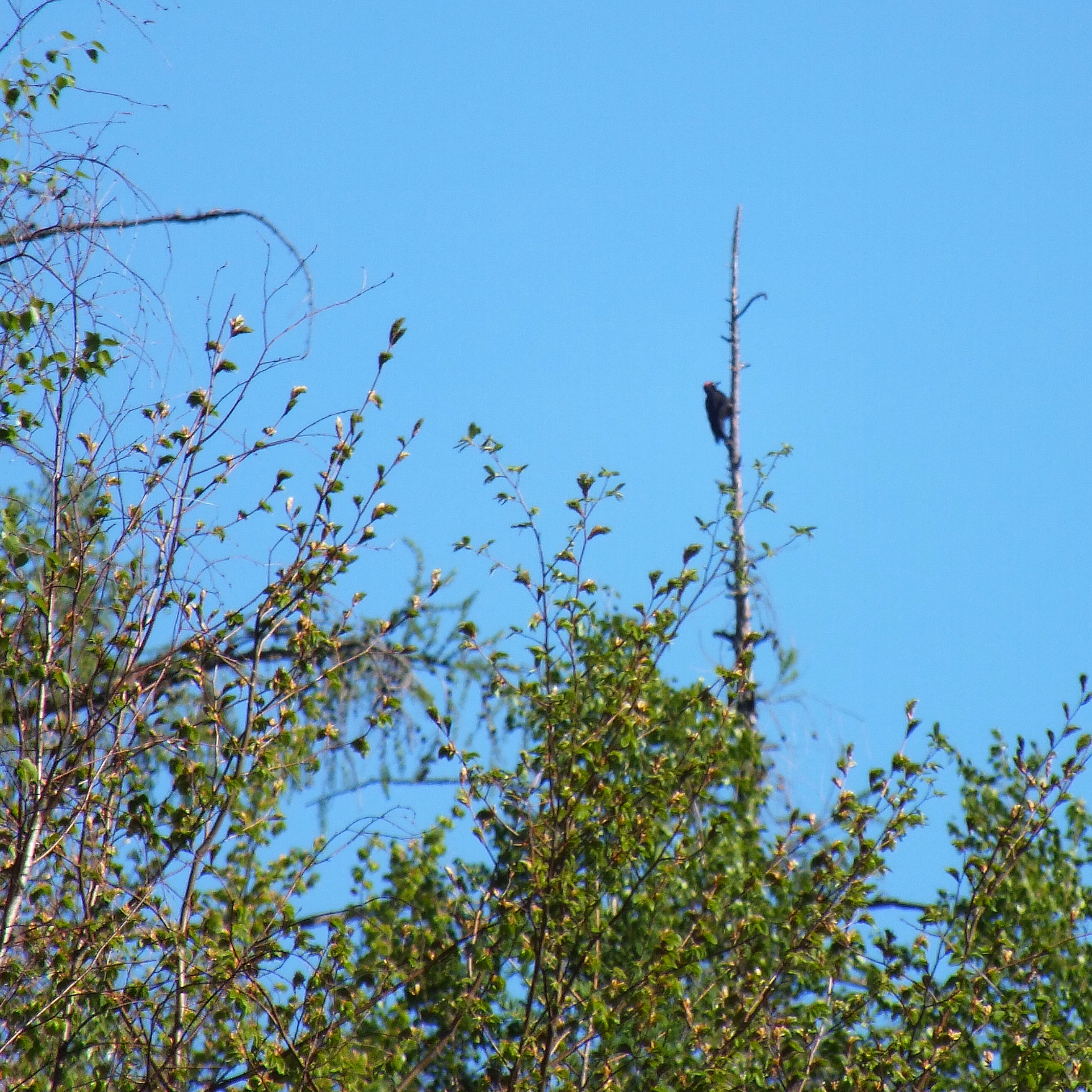 And that was it. I’d seen 41 new birds in Europe. I kept my eyes open to the very end, but never saw some that I though would be easy finds— like the Jackdaw (although through the car windows I did see smaller black birds hanging out with Carrion Crows that may have been Jackdaws. But I never could get a clear look). There were  others that I saw well enough to narrow the identification down to a couple species, but counting them just doesn’t pass the feel-good test. These included a probable Goldcrest that was so far up in a dense pine that I can’t definitively rule out Firecrest. I also saw a Marsh Tit or Willow Tit that was actually calling, but I didn’t realize until checking the field guide that the call was the way to tell them apart and I couldn’t trust my memory because I wasn’t paying strict attention.

My numbers were also limited by the fact that I only spent quality birding time in a single habitat—mature woods—except for the hour or so I spent in the cemetery. I’m sure I could have added several more species if I had a chance to wander through more open rural areas or along rivers, lakes, and marshes. It was also a couple weeks too early for some spring migrants.

Still, I’m happy with what I saw and achieved my long-time goal of birding where almost everything I saw was new.