I traveled to Orlando with a group from my work for a conference. In a moment of weakness, I decided not to stay an extra day to bird. Instead, I’d get up early one morning and drive half an hour north to the Lake Apopka Wildlife Drive where I had a very good chance of seeing four lifers. But then I realized that would only give me about 40 minutes to bird before I had to leave to get back to the first session of the conference. I pretty much gave up on birding. But then my boss greeted me one morning by giving me permission to skip the first session on Wednesday. That meant I’d have two hours to bird. I started getting excited again—until I did some research and found out the wildlife drive is only open on weekends. I sighed and looked for a plan B.

I found Newton Park, a small strip of lawn and playgrounds on the edge of the lake in the town of Winter Garden. The whole park is maybe 15 acres, all of it groomed. But the lake is shallow and weedy and local birders regularly reported a large number of birds. One of these was a Snail Kite, which would be a lifer. With a chance at a second lifer nearby (next post) it seemed worth my while. I rented an economy car from the Enterprise booth in the hotel I was staying at. Or at least I thought I did. When I went to pick it up, I discovered that I’d stupidly made the reservation for the following week. The kind young woman behind the desk explained to me that they don’t keep cars there. When someone makes a reservation, they order a car from the airport Enterprise. But they did happen to have a pickup, and they would give it to me for my economy car rate. Which was very nice of them.

That’s why I found myself driving through the early morning darkness to Winter Garden in a Dodge Ram 1500 for two hours of birding. It got light enough to actually see birds at 7:00, which was when the park opened. I arrived at 6:57. I parked the truck, gathered my camera and binoculars and headed across the parking lot.

I hadn’t been birding five minutes when I saw a Snail Kite land on the railing of a short boat-launching dock and begin feeding on an apple snail. I was maybe 50 feet away. Finding this lifer was that easy. It was still very early and not yet very light. My camera compensated and that’s why the photo is a bit blurry. Notice also the second Snail Kite out over the lake in the background swooping for a snail. Both of these are females. There was a slate-gray male flying over the lake on occasion, but I never managed a photo. 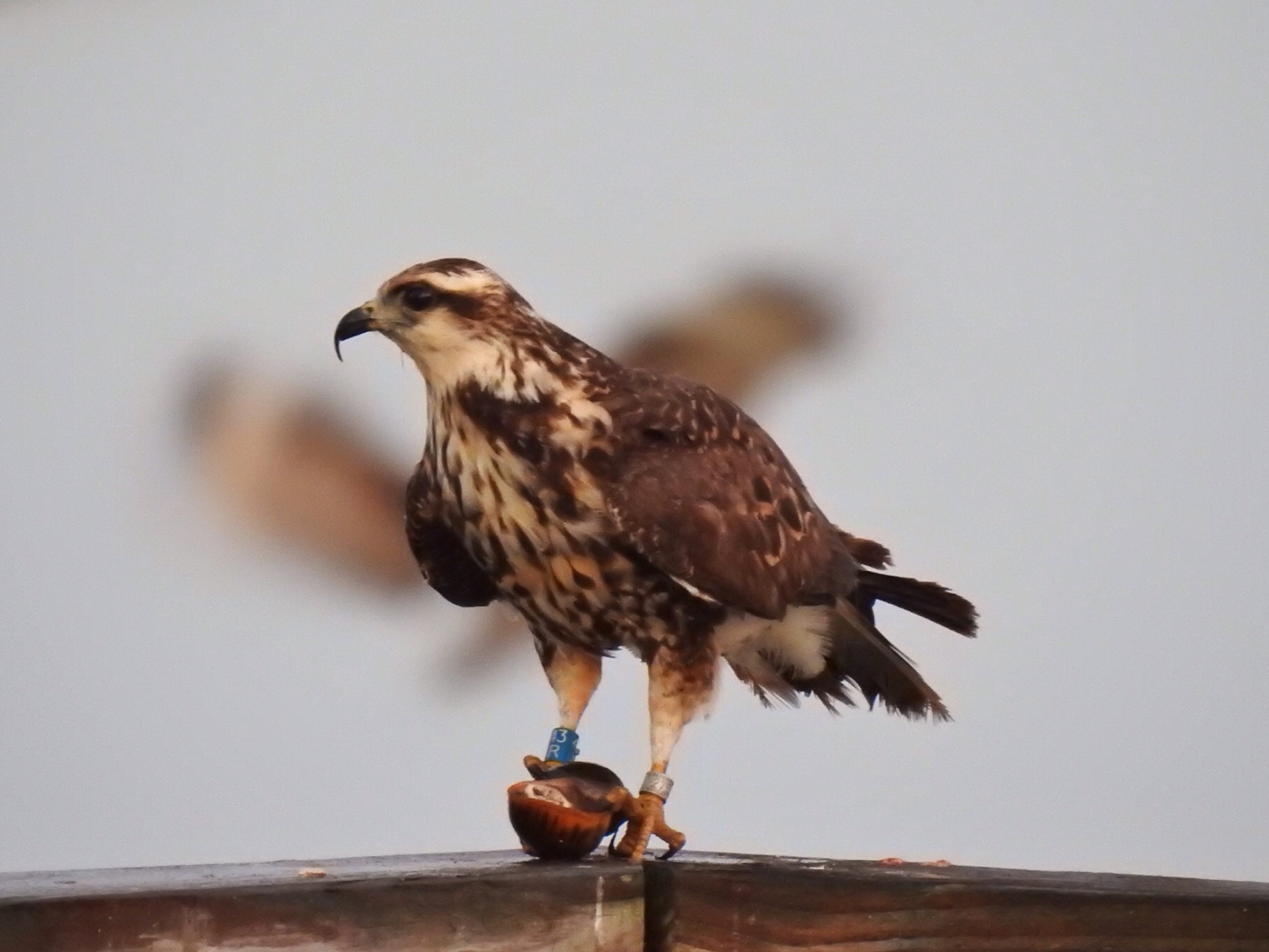 For the nearly two hours I was there, at least one Snail Kite was almost always in view. This is the same bird as the one above about an hour later, after the sun was up. It was perched in a tree right next to the dock where I first saw it. I know it’s the same one because I can read the numbers on the leg bands. 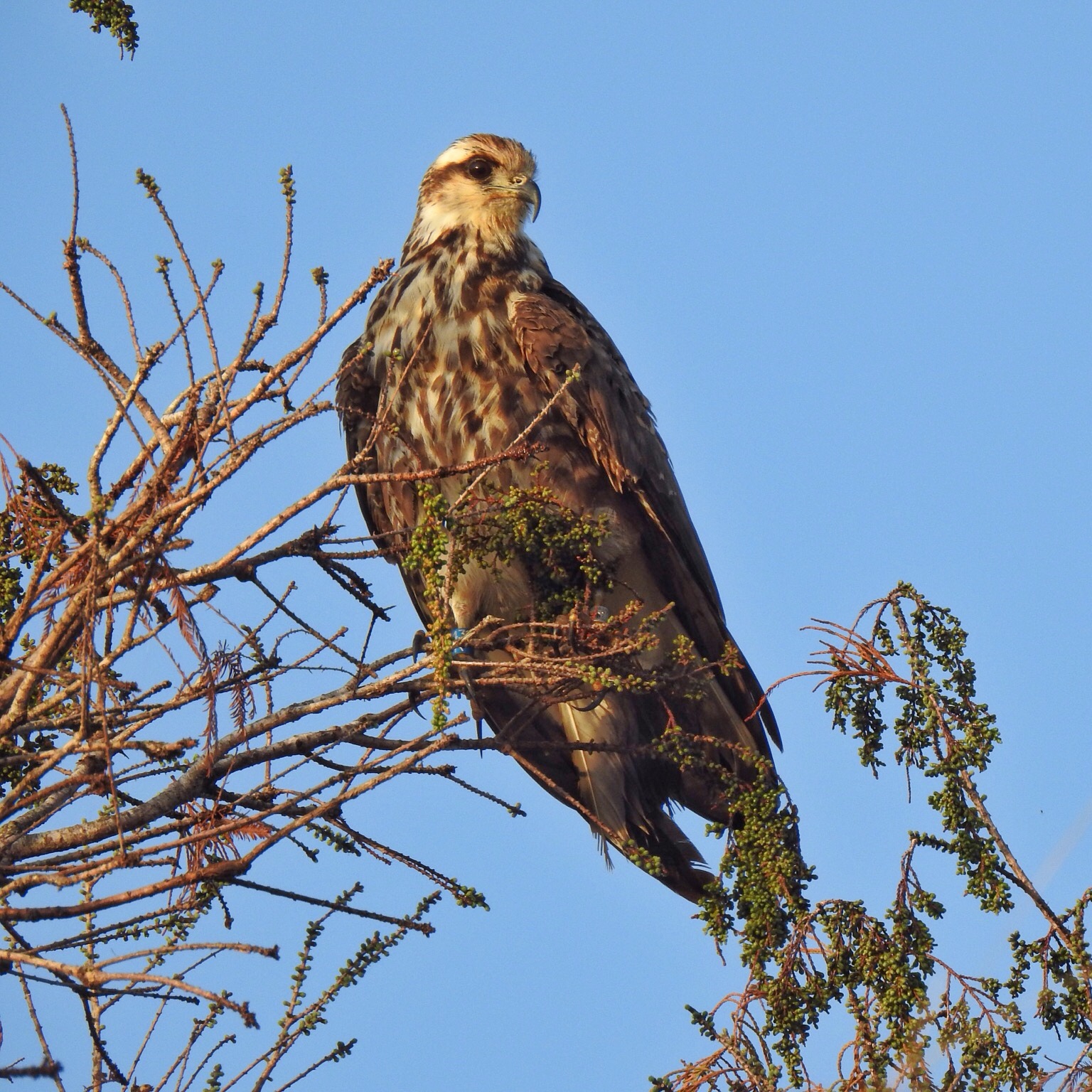 I saw it again later on the end of a second, longer dock.  My guess is that the Boat-tailed Grackle was hoping to steal the snail. 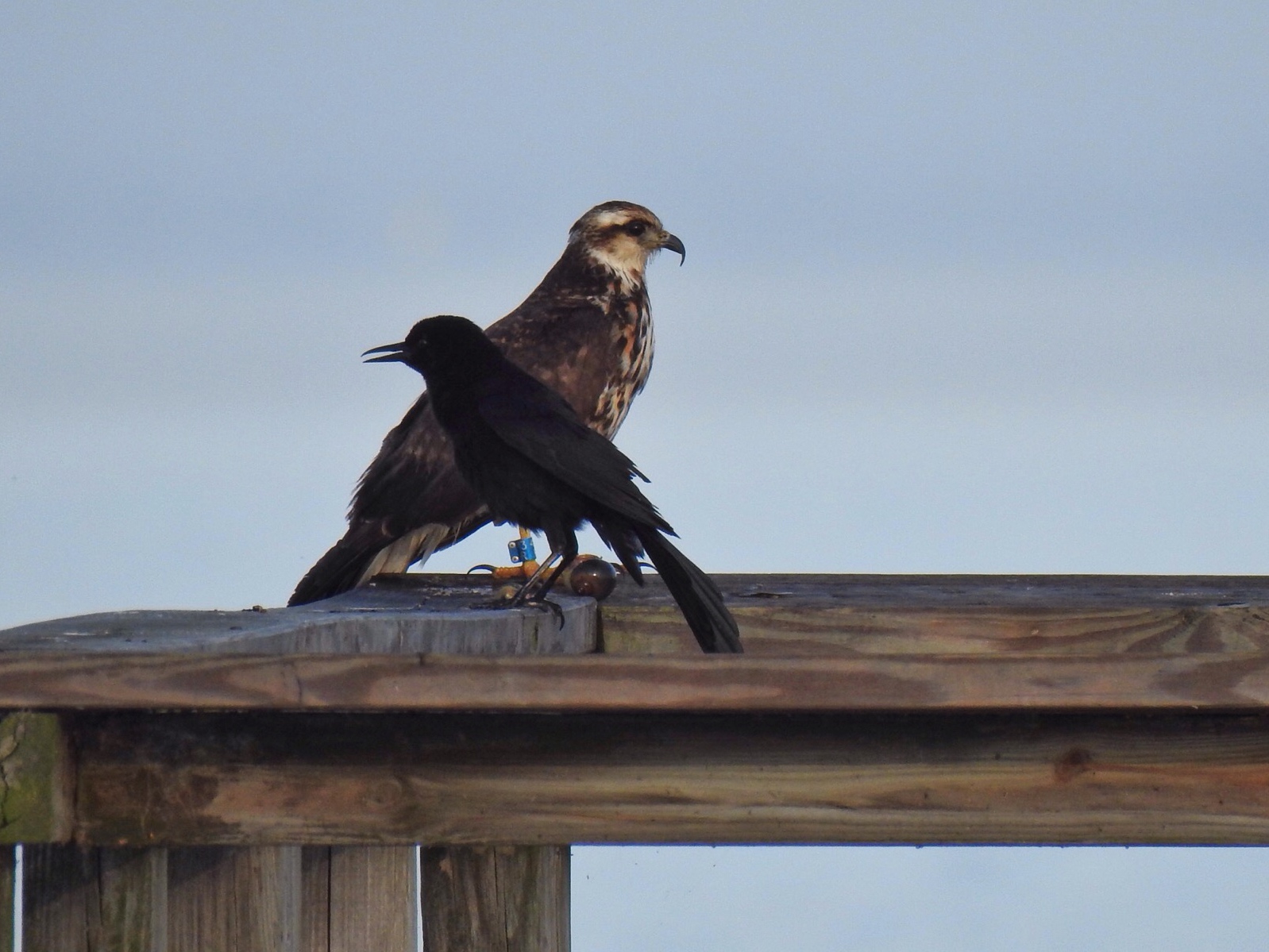 The snails in the first and third photos are apple snails, pretty much the exclusive diet of Snail Kites—hence the hooked bill. The kites are common in Central and South America, but only reach the U.S. in Florida where a 1,000 or so live. Their wings were broad and they flew with loose, floppy wing beats fairly close to the water. When they spotted a snail, the flopped down and grabbed it with their talons, then carried it to a perch to eat it.