First the bad news. Back on February 10 of this year, I drove two hours north to Louisville to look at a duck that was reported to be a Mexican Duck—reported to be a Mexican Duck by the guy who wrote the article for the ABA website on how to identify Mexican Ducks. I found the bird, but without that guy’s photos to guide me, I never would have thought it wasn’t a female Mallard. I took photos and wrote it up as a lifer. It was darker than most female Mallards, with less white on the tail, and with a thin strip of white on the scapular, but the bill looked very Mallard-like to me. Still, what do I know? I added it to my list. 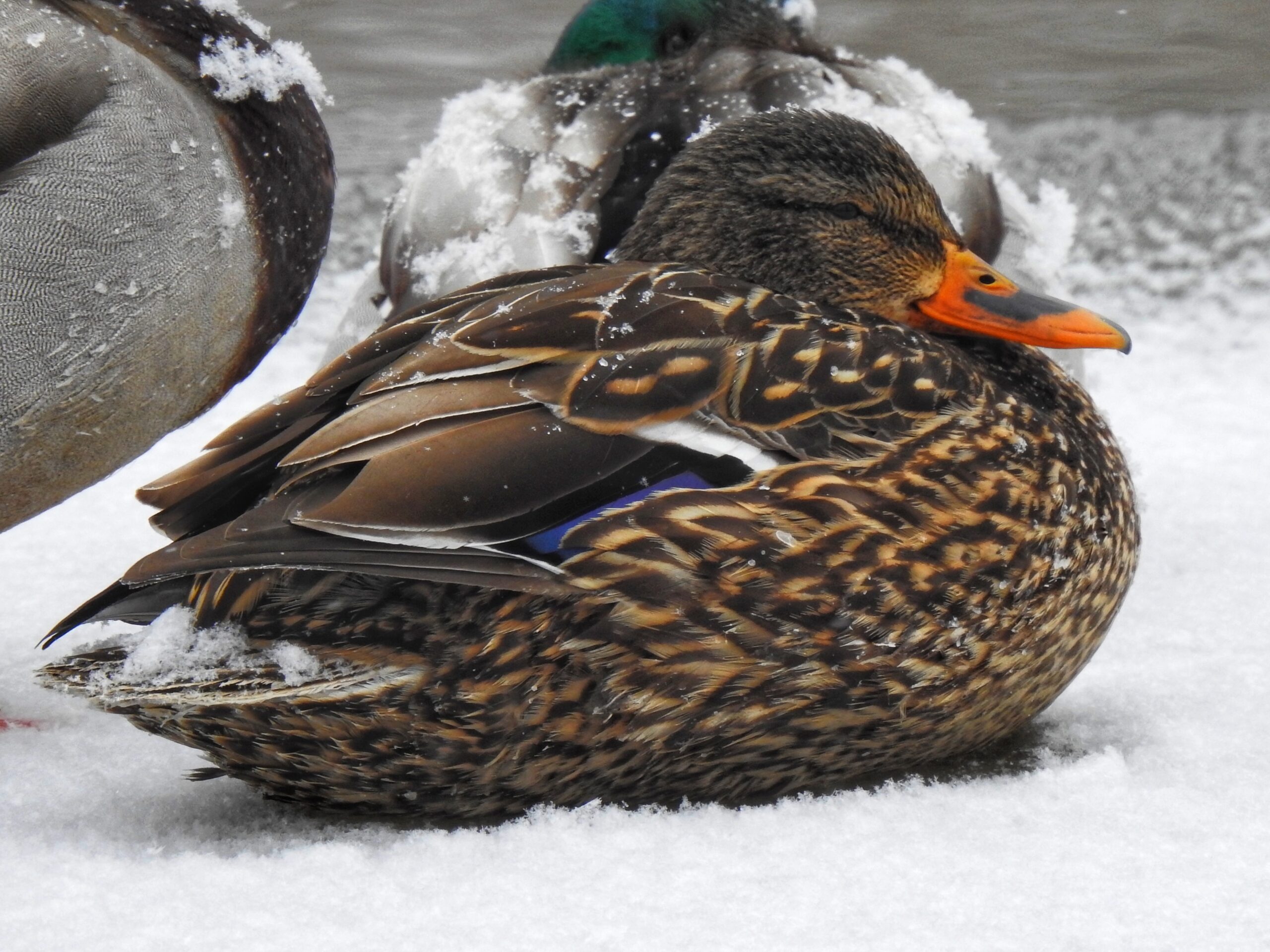 But within days, a couple of days other local experts chimed in on the Colorado birders chat site and said no—it was just a Mallard. The explanation was this: “The bill pattern is unusual for a Mexican Duck as is the somewhat pale belly. The bird is not as dark as most female Mexican Ducks, and I’ve seen female Mallards with extensively brown tails. This is all kind of vague, but the ID of female Mexican Duck vs. Mallard is complex and still not fully worked out.”

So I had to go through the process of deleting Mexican Duck from all my lists.

On my birthday, I drove up to south-central Wyoming to look for Greater Sage-Grouse. At the last minute, I checked the rare bird reports and saw that another Mexican Duck, a male this time, was reported from a small lake in Englewood. From the photos on eBird, this one looked much more like I expected a Mexican Duck to look like. I had time and was in the neighborhood, so I made the detour.

Arapahoe Lake is a tiny pond in the middle of a subdivision. By small, I mean perhaps 60 yards long and 40 yards wide. There’s a walking path along about a third of the shore, so I parked and walked. I saw many Mallards and a few other birds, but not the Mexican Duck. I circled the lake and walked on the road across the dam. I was just about to give up when I saw a suspicious-looking duck on a rock across the way. I had walked right past it, but as it was only visible from the path from one angle, so I’d missed it.

The duck was in the shadows, so the light made it impossible to i.d. it for sure. I headed back to the other side. That’s when I saw the very large sign informing me that if I didn’t live on the lake, I was trespassing. Whoops.

But now I had a dilemma. I’d see what I was pretty sure was the lifer I was looking for, but to be positive, I’d have to trespass again. Since nobody had stopped me the first time, I went for it—which I usually don’t do. I got one photo of the Mexican Duck on the rock before it eased into the water and swam off. 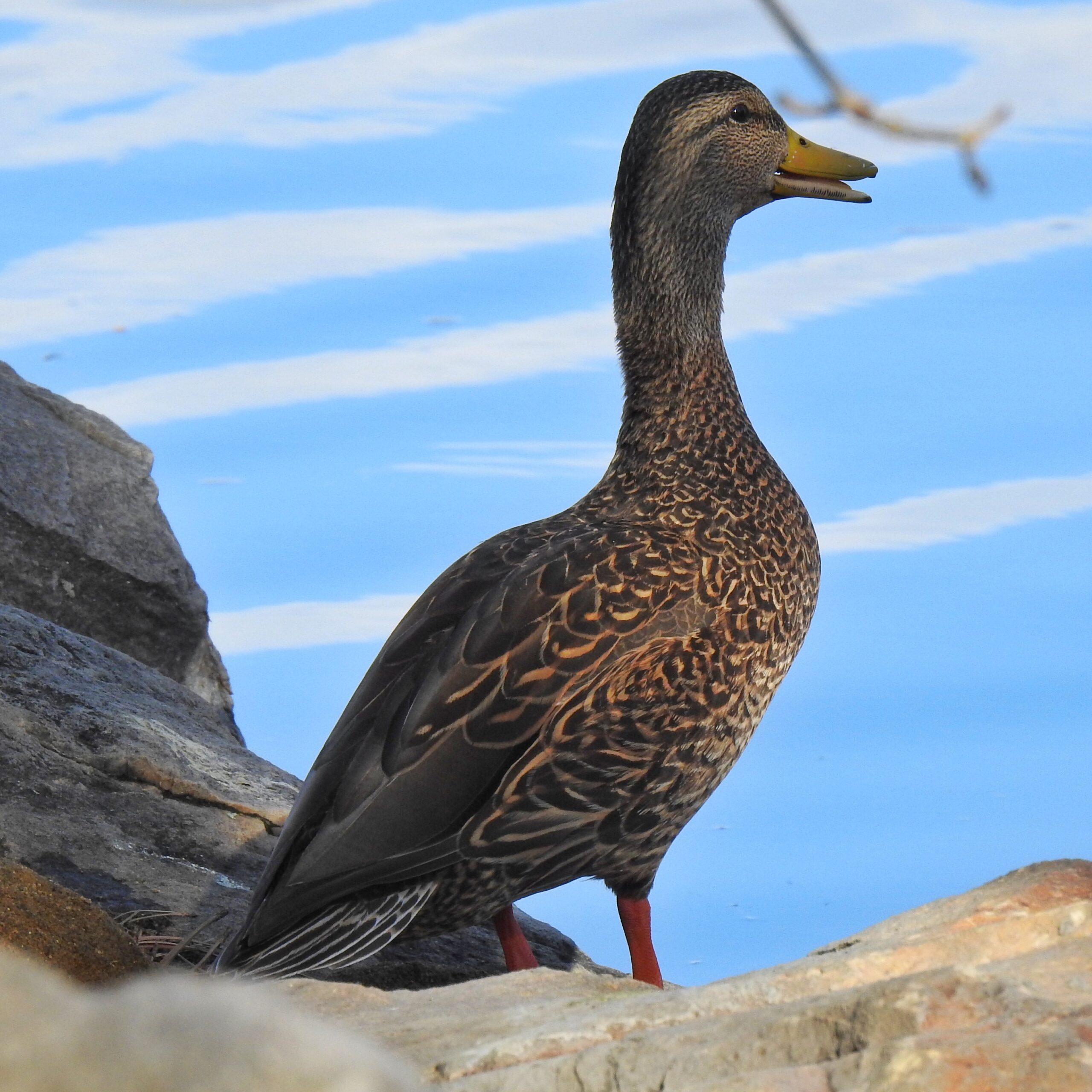 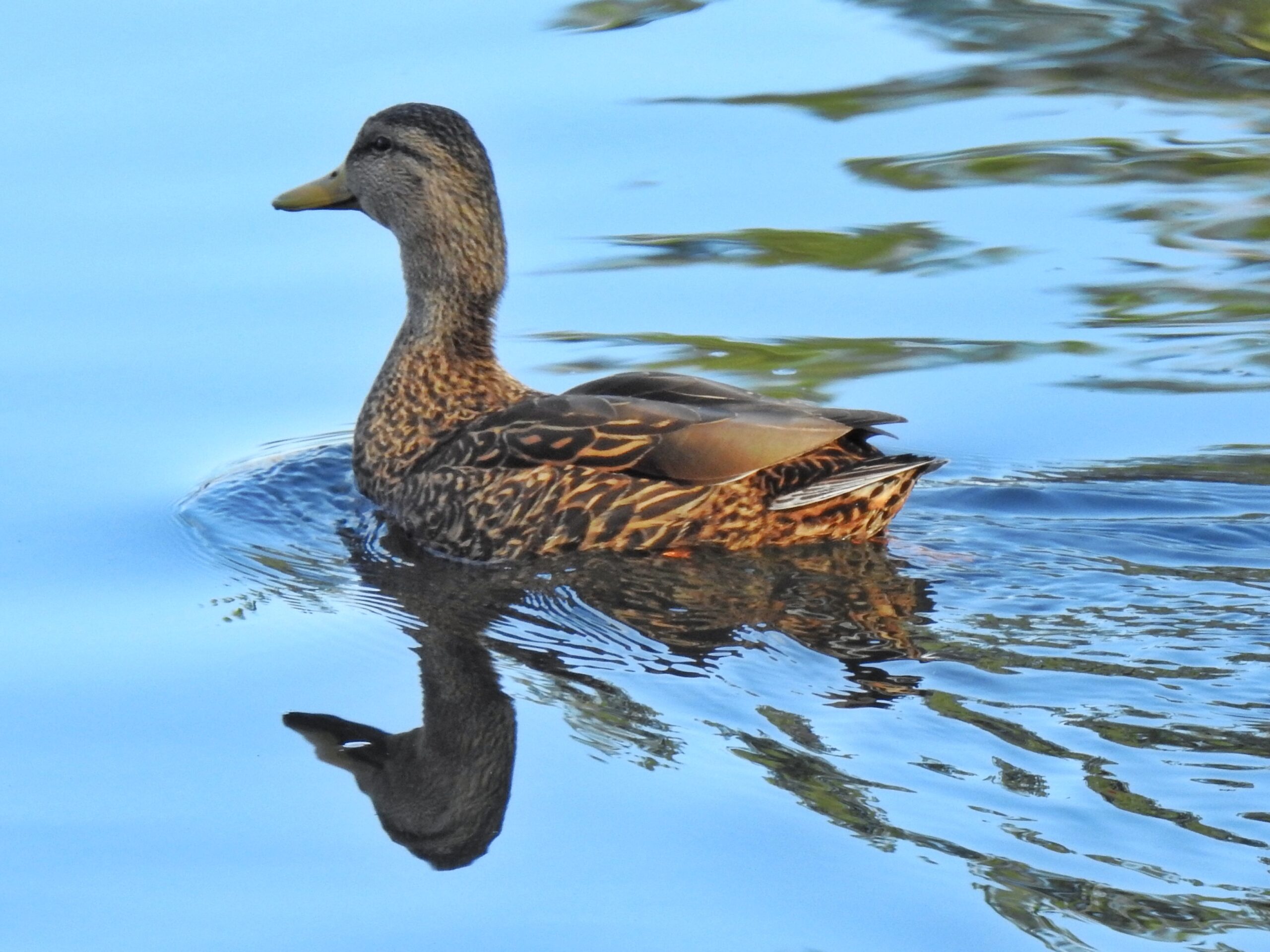 In the shadows, my photos showed little more than a silhouette. And I didn’t feel good about trespassing. So I returned to my car and drove back to the dam where I was allowed to be and took some more photos.

The Mexican Duck was a male—evidenced by the orange-yellow bill (like that of a male Mallard). It was darker than the female Mallards, with narrower pale edges on its feathers. The tail had limited white and no curling feathers. I feel a lot better about this one than I did about the Louisville one. This one I could have identified as a Mexican Duck on my own. Another hint that it was a male was how chummy it was with one of the female Mallards. They were definitely behaving like a pair. (The two species were recently split and often hybridize.) Other than that, it behaved like a duck on a pond, slowly drifting around with no particular agenda or direction.

The white eye perplexed me for a bit. I thought perhaps the duck was blind in one eye. But I later saw that eye open, and you can see it the same think on the female Mallard in the bottom photo, so I think it was just a lid to shield the morning sun. 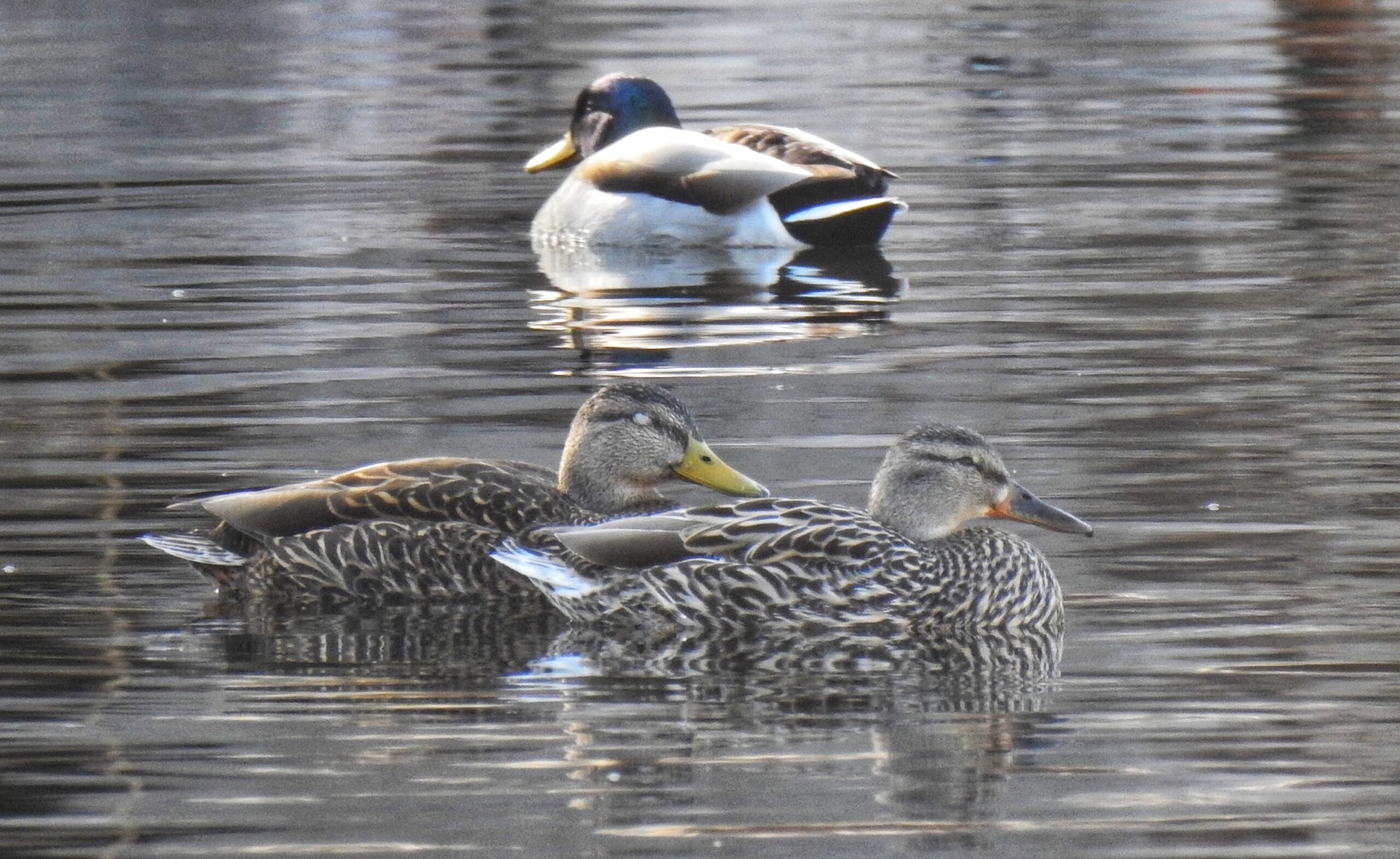 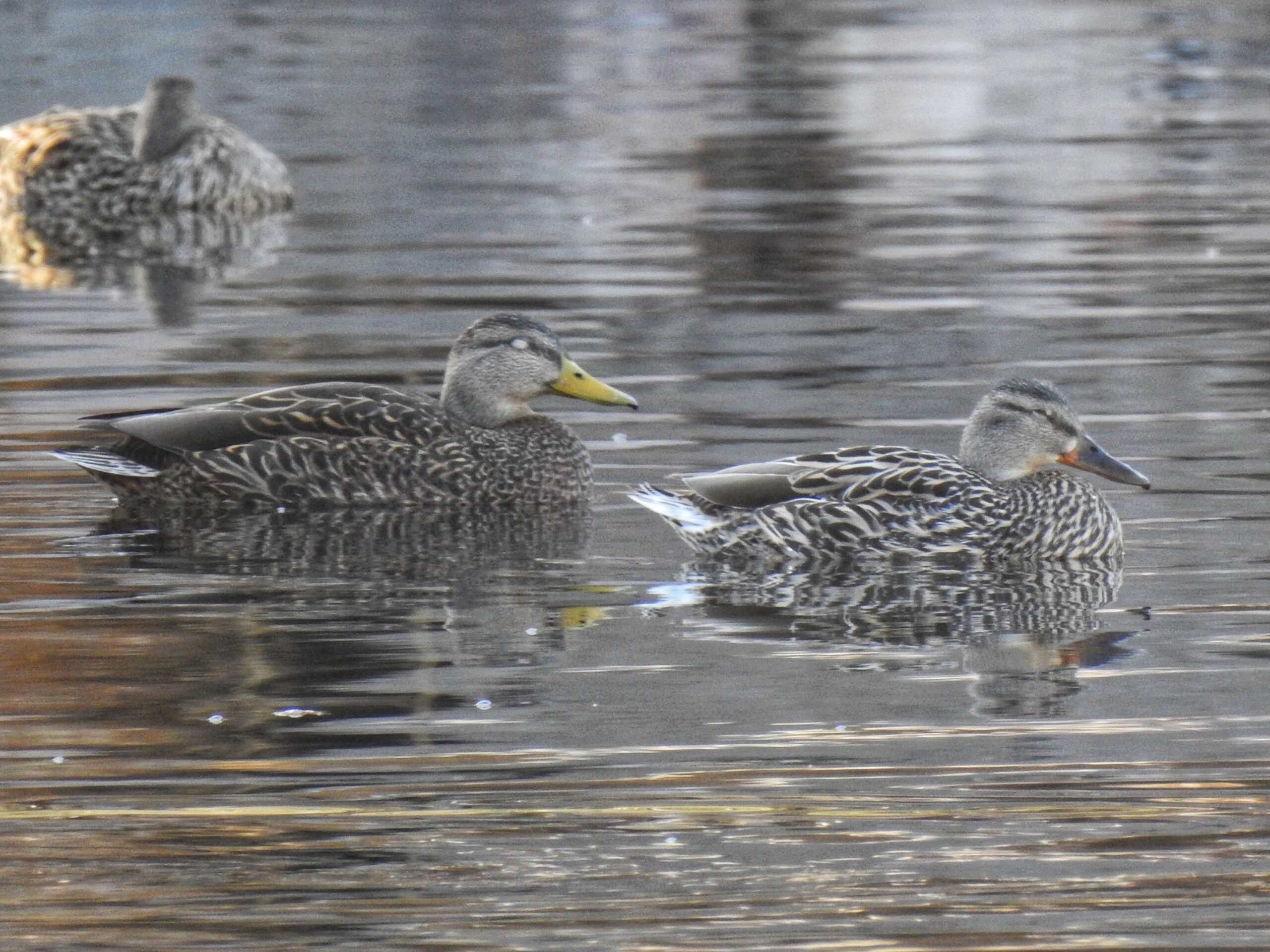 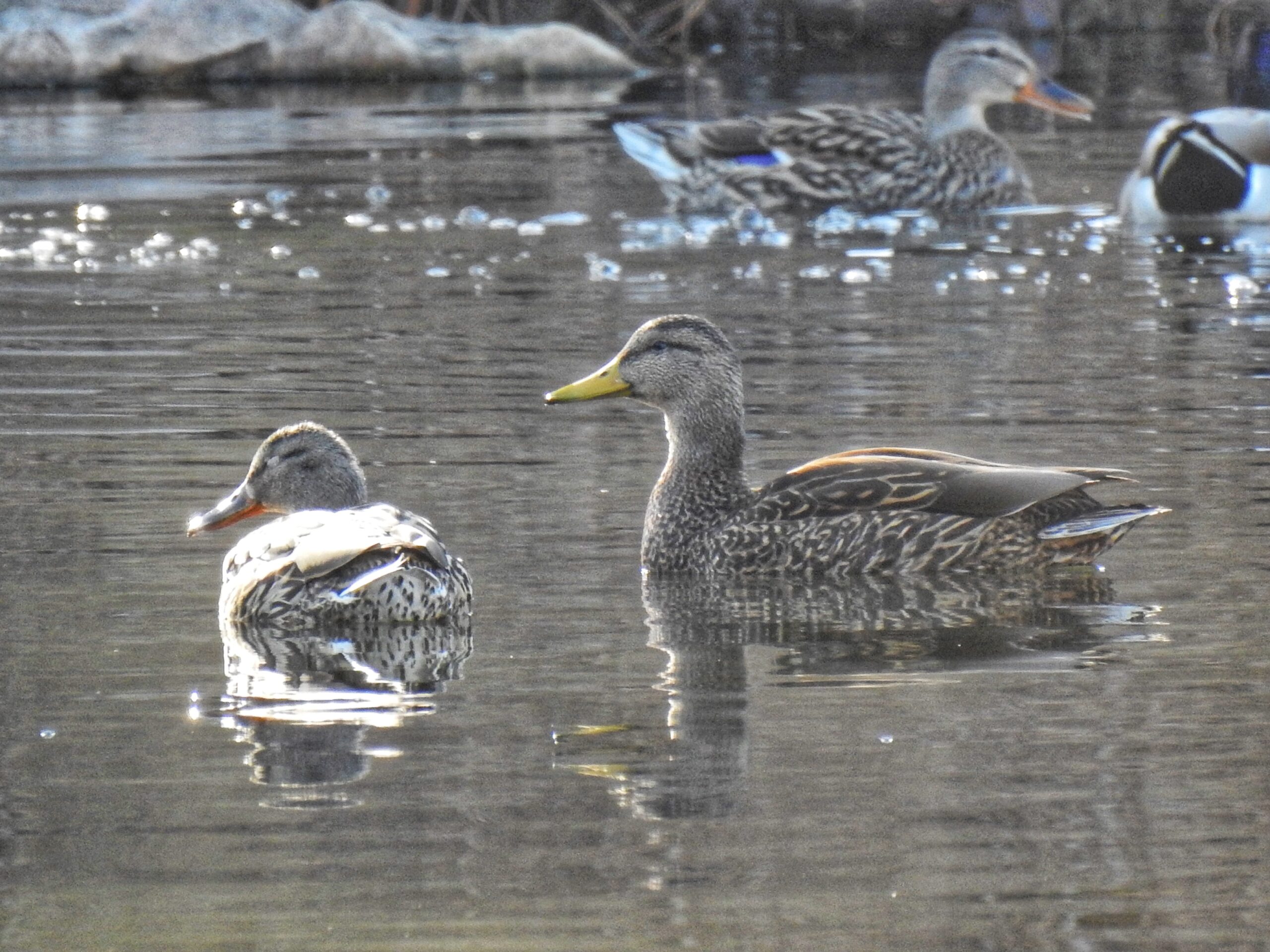 The Mexican Duck was, until recently, a subspecies of the Mallard. Its normal range is, unsurprisingly, Mexico, along with southern Arizona, New Mexico, and Texas. There’s usually one or two wandering around Colorado at any given point in time.

This wasn’t a terribly exciting lifer sighting or a particularly exciting place to see it. But I’m glad I’ve ticked it off my list with a bird that doesn’t have me doubting myself.