When we moved to Colorado and I realized it might be possible for me to add a ptarmigan to my life list. I got excited. But after failing to find one during several visits above timberline around the state, I began to think it was a mythical creature.

I’ve been asking experienced Colorado birders where to go, and most of them said Medicine Bow Curve, early in the morning. They also said they were easiest to find in July. Over the past couple weeks, birders have been reporting them almost daily, usually between 6:30 and 7:30 am (but not always).

So obviously my best strategy was to get there early and do it soon. I got up at 3:45 am and was out of the house before 4:00. After an uneventful trip up, I arrived at Medicine Bow Curve right at 7:00 am. I walked the trail out into the tundra and soon passed two guys who were birding. They hadn’t seen a ptarmigan yet, but seemed confident. A little later I met a man and a woman, also looking for them. They’d had luck on that trail in the past, and they also seemed confident. (The guy had a Cubs hat on, which gave me a good hook for a conversation). I walked past the couple to the end of the trail, then started back. My plan was to position myself between the couple and the two guys so the five of us would have the area pretty well covered when (if?) a ptarmigan showed up.

But before I could get where I was going, one of the guys motioned that he had found one. The couple and I hastened back and saw the bird. It was a male, walking through taller vegetation in a swale maybe 30 yards from the path. I managed one photo before it disappeared behind a rise. I had my bird and a photo to prove it, but I hoped for more. 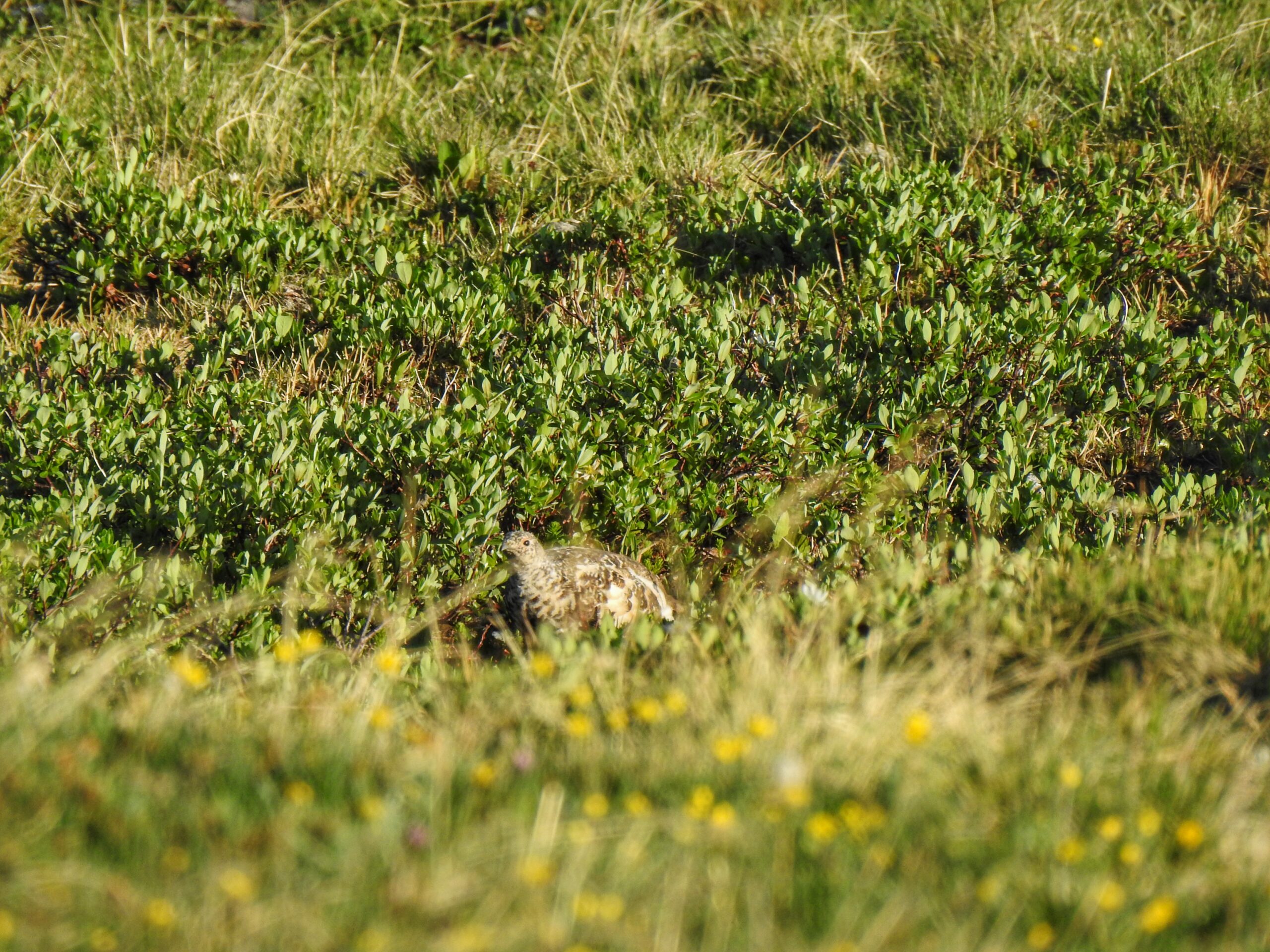 Perhaps five minutes later, the ptarmigan popped up on top of the ridge. He acted nervous as he headed uphill toward us. He began running, then took off and flew a couple hundred yards up the hill behind us. At almost that same time, a female popped up on the ridge. She made her way between the tussocks of grass and walked right past us maybe 10 feet away. She flew across a puddle and landed among the rocks maybe 25 yards uphill from where we stood.

Right about then, two males began to chase each other, fight, and pursue a female high up on the hill. The mele lasted a couple minutes. The couple left about then, and the two guys about 15 minutes later.

The female ptarmigan that had walked past us settled in next to a rock and barely moved. I could see how easy it was to miss them, even when they were only 25  yards away. I could see a male on a rock at the very top of the ridge. 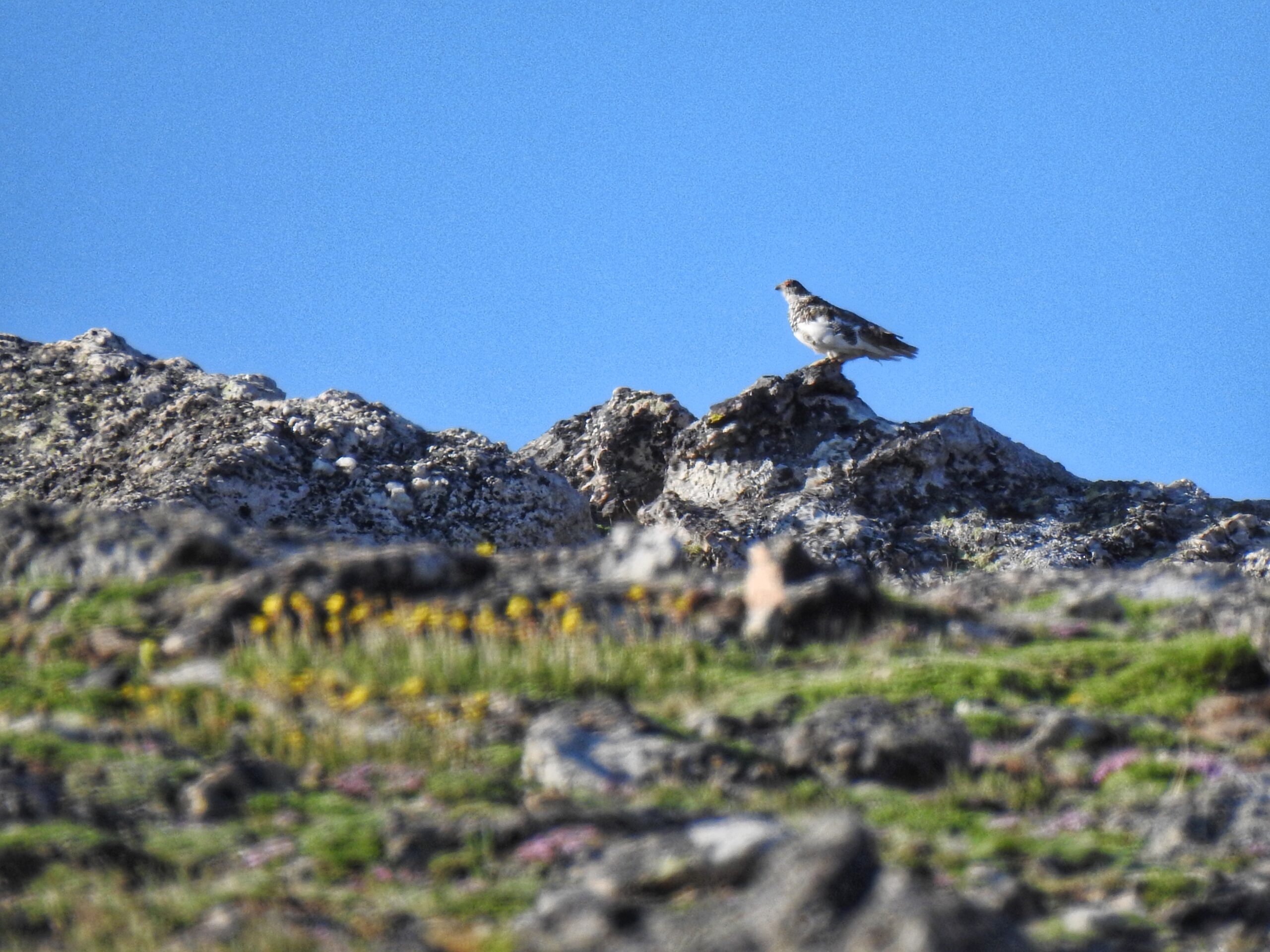 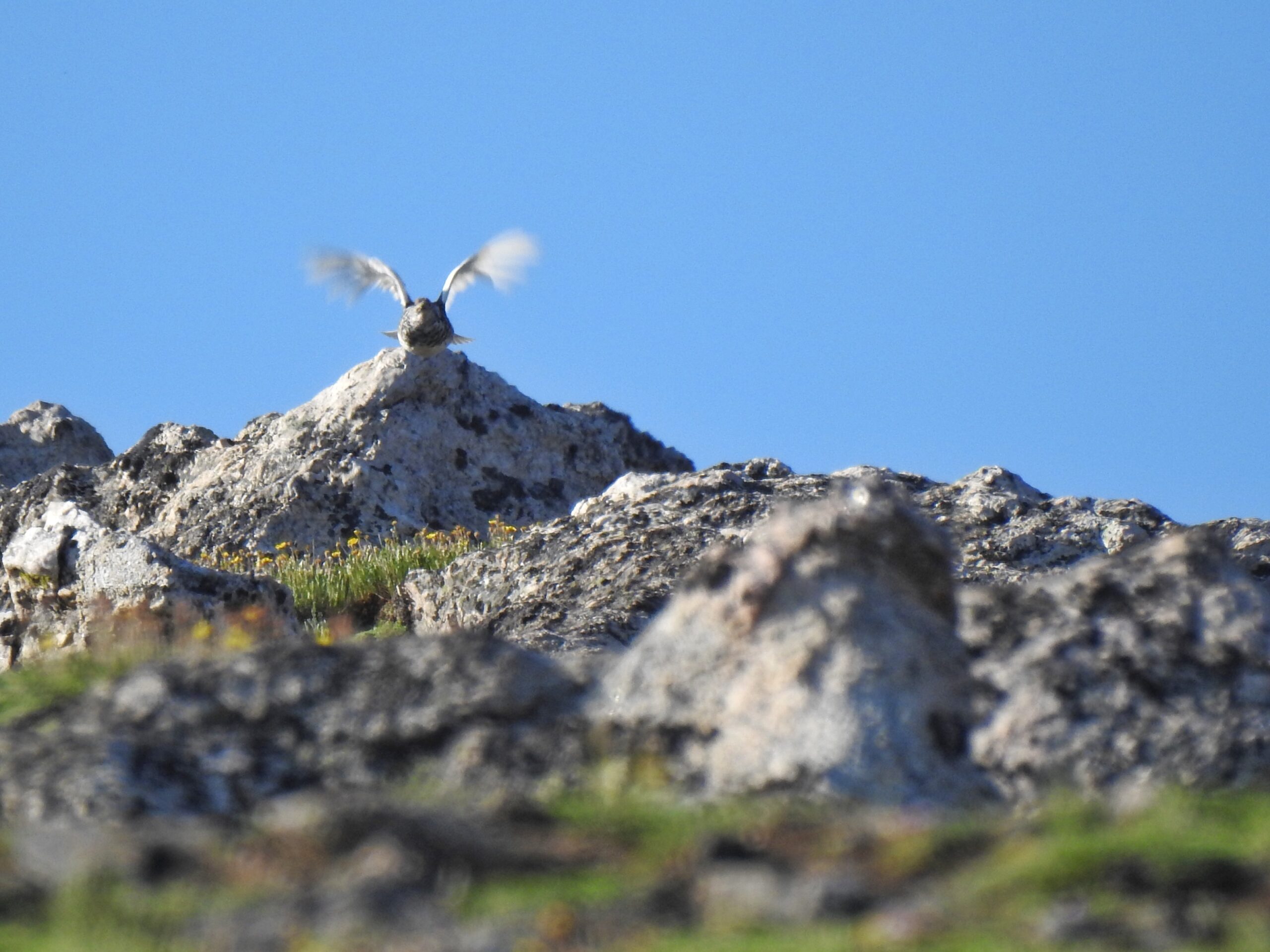 He flew about halfway down the slope and somewhere conjured up a female that I hadn’t seen before. The two of them wandered up the hill and disappeared.

The other male (which I’m assuming was the first one I saw), flew down and wandered over by the female that was crouched by the rocks. For the next 45 minutes, that pair either sat still or wandered slowly about picking at the ground. They were still in the general area when I left, an hour and 15 minutes after I’d seen the first one. For that entire time, at least one ptarmigan was in view, although if you didn’t keep close track of where they’d been last, it was easy to lose them in the rocks.

The male. As you can see, they’d been banded to track them. I kinda felt like this made them less wild, and I wasn’t thrilled with it. 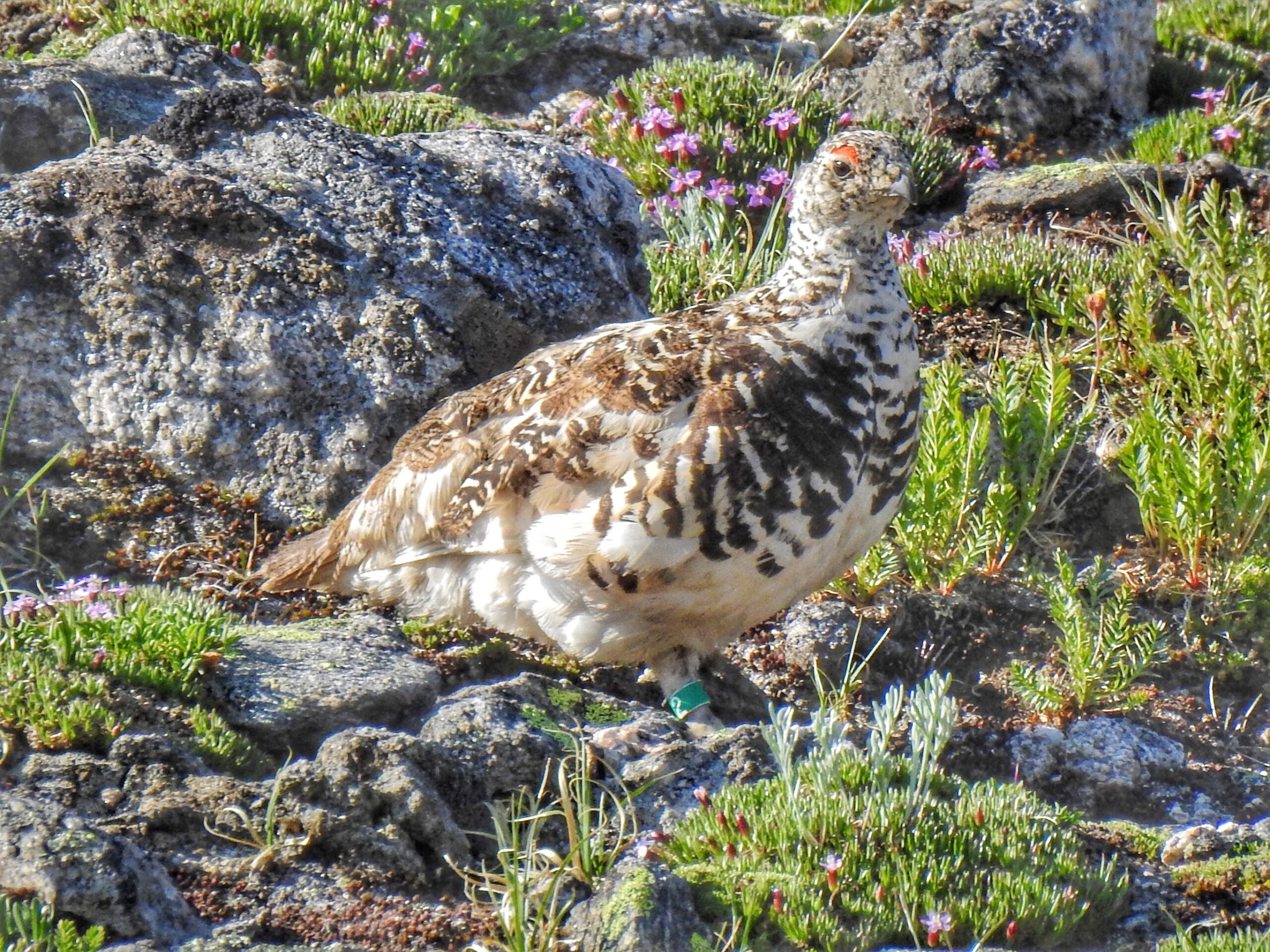 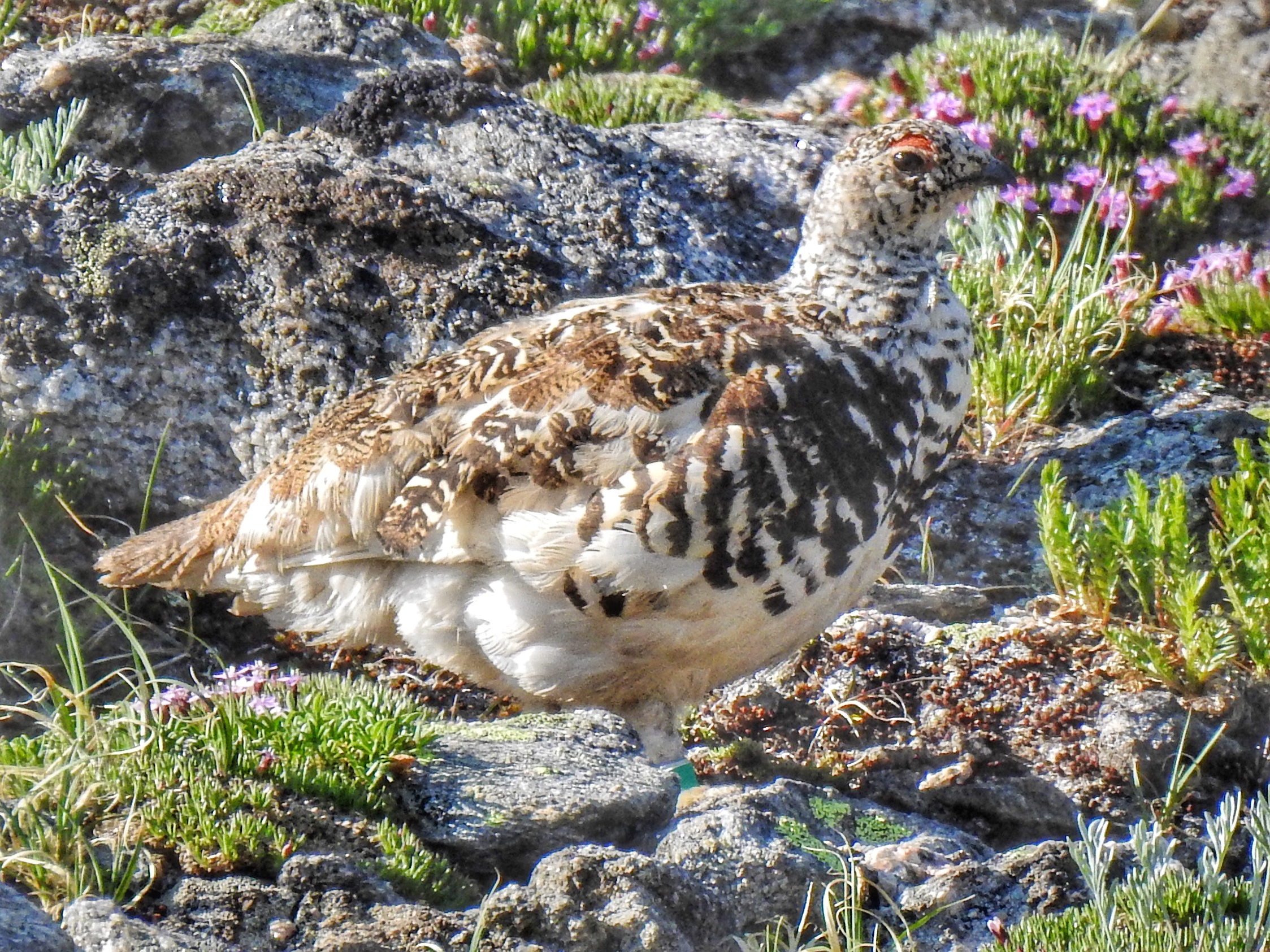 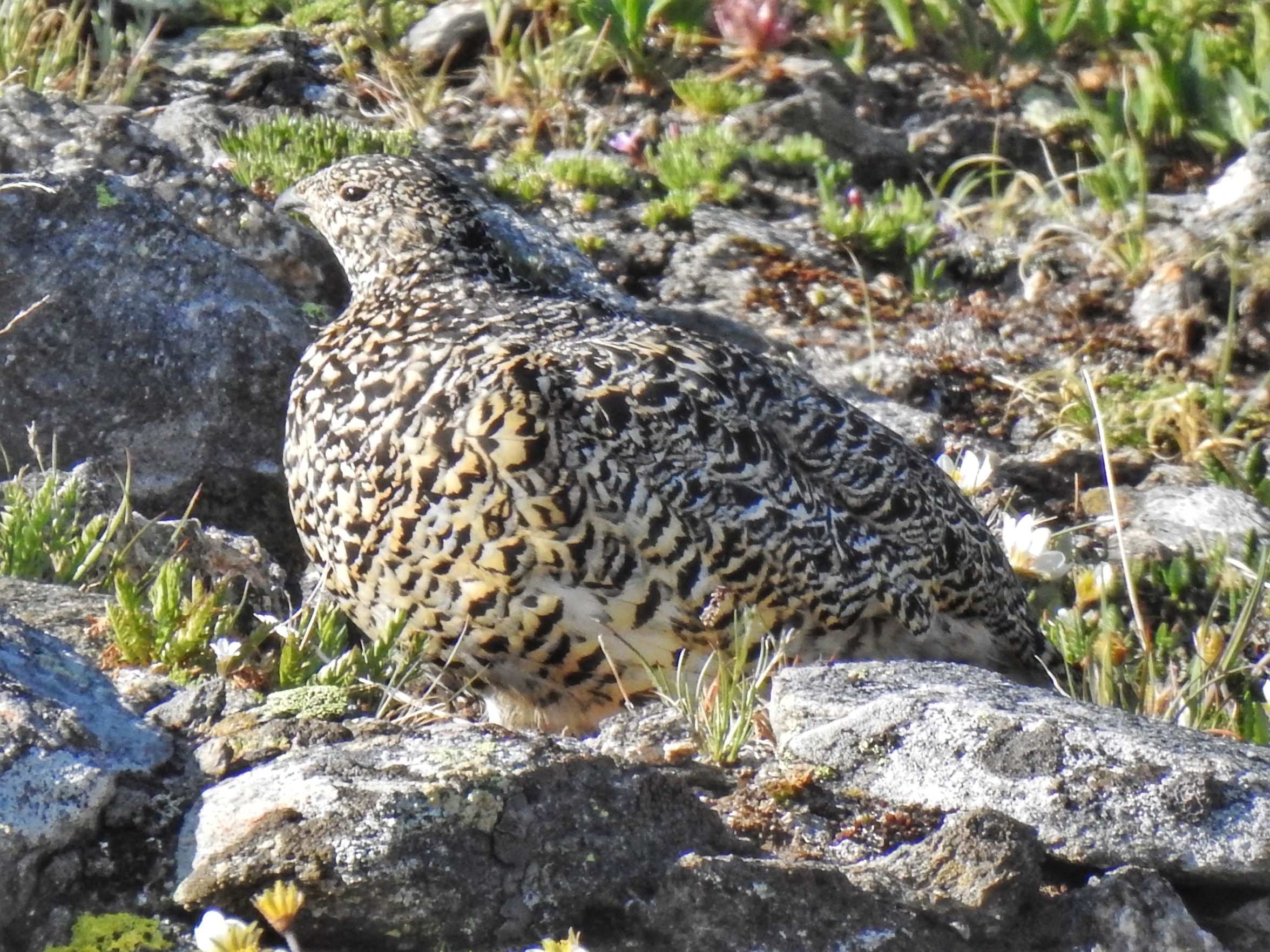 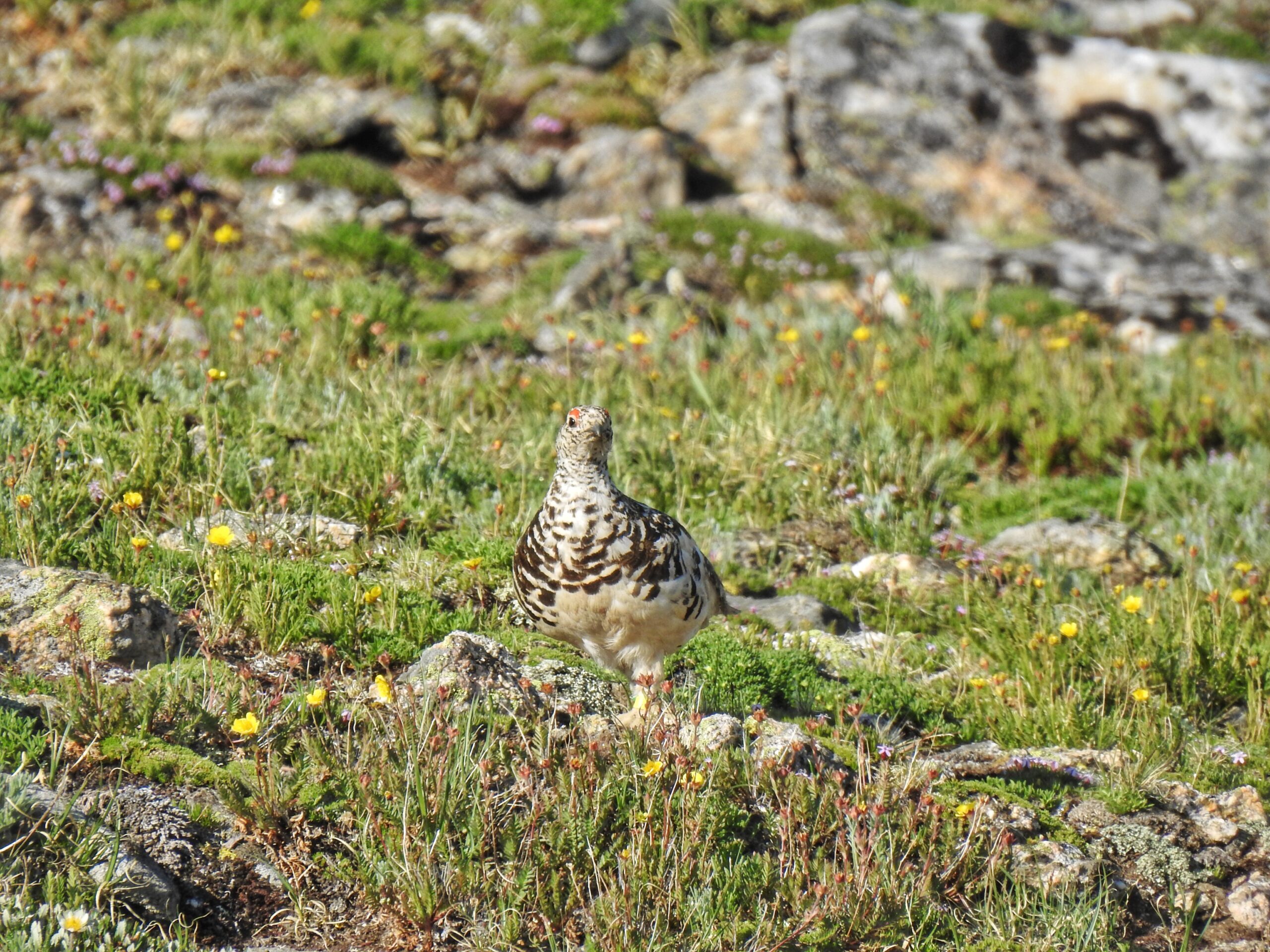 A closer look at that same photo. 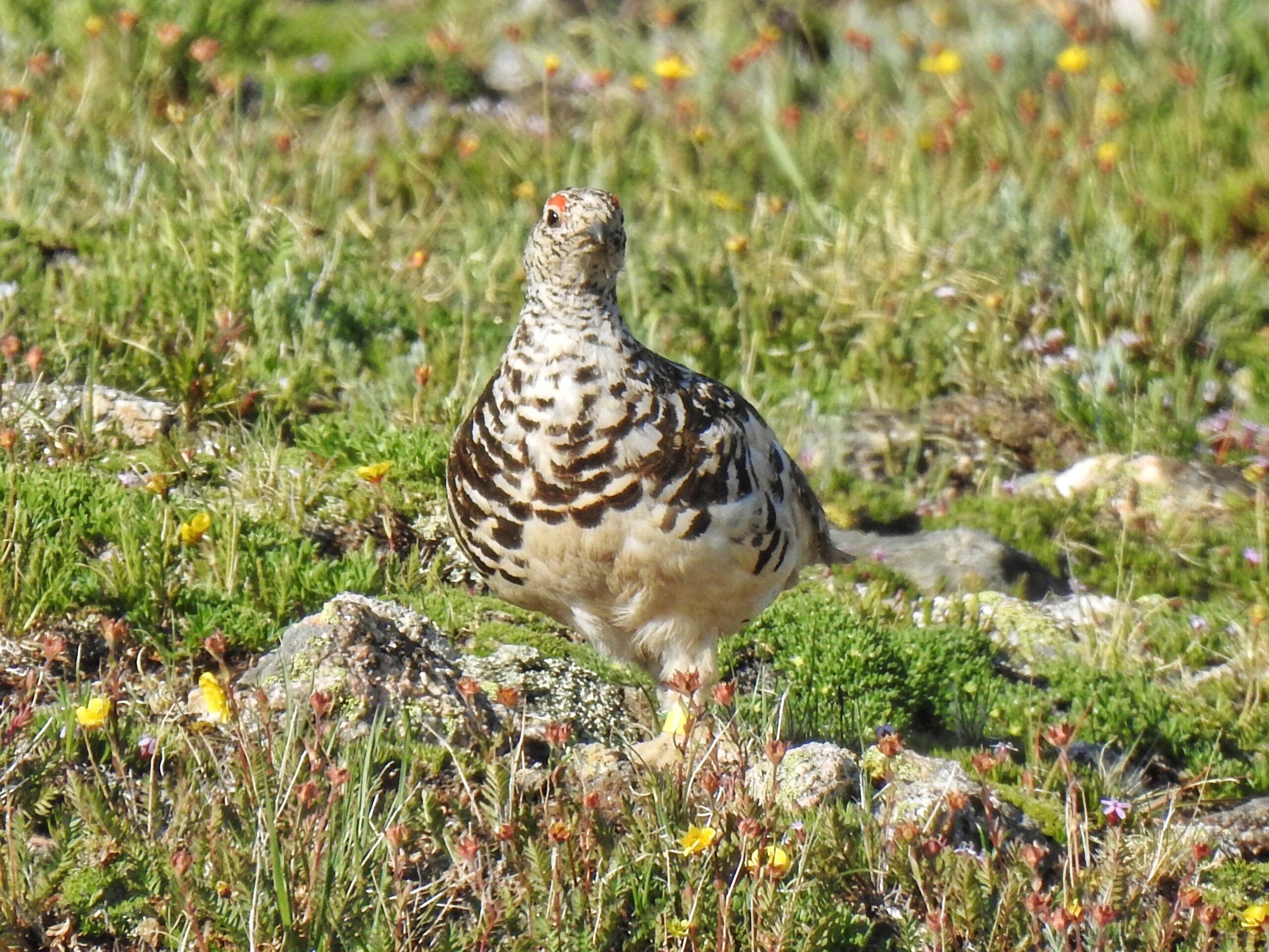 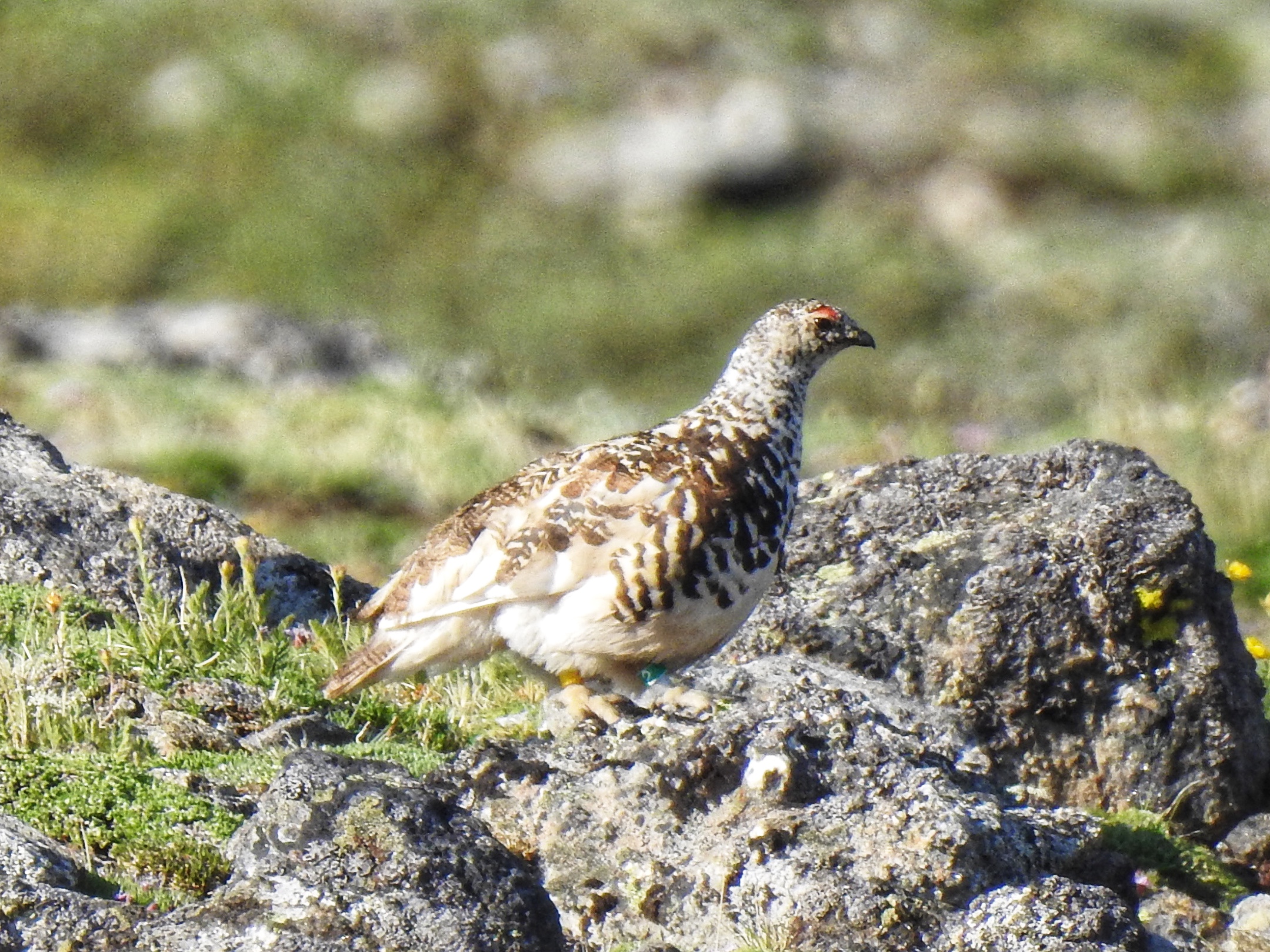 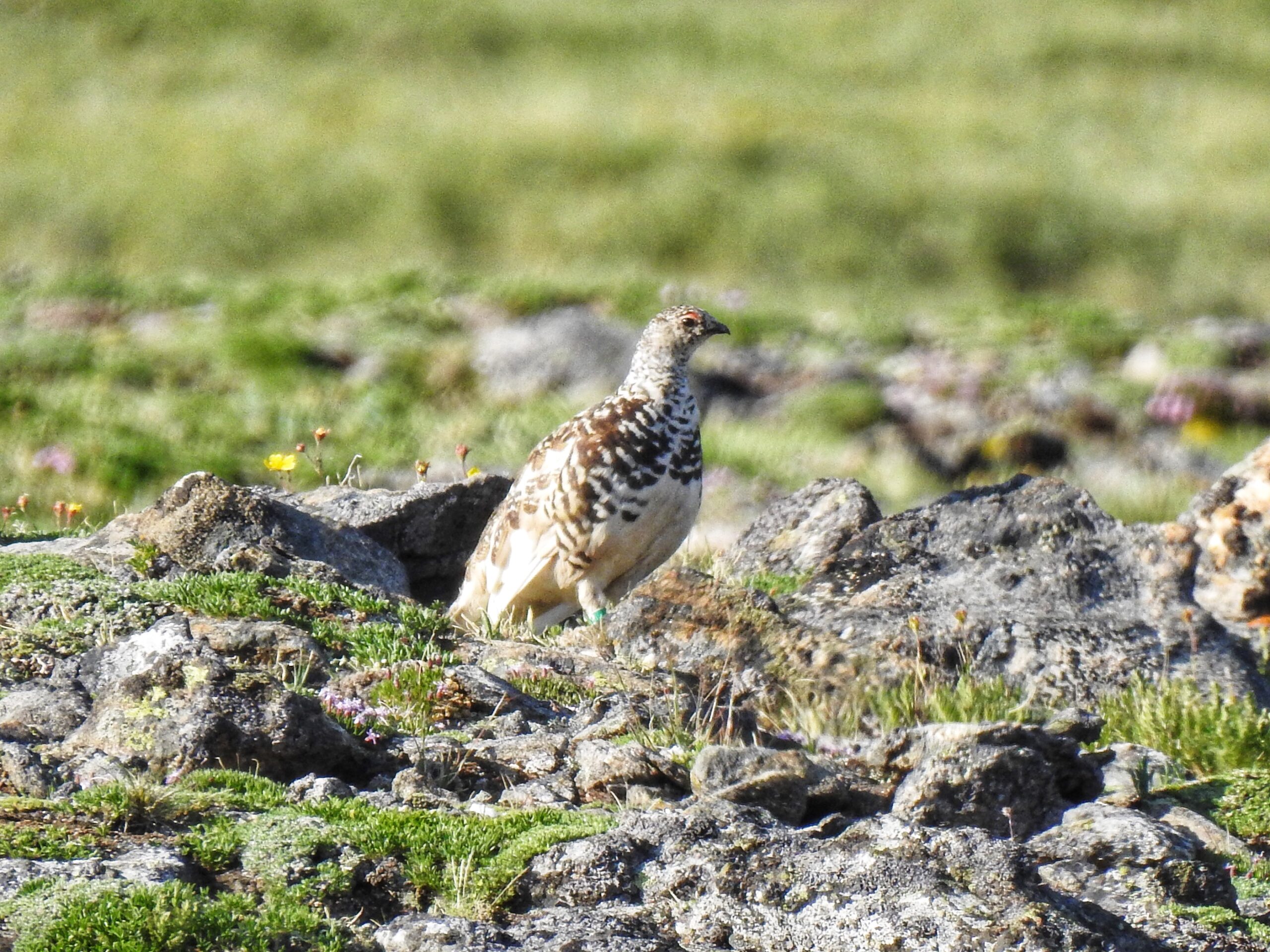 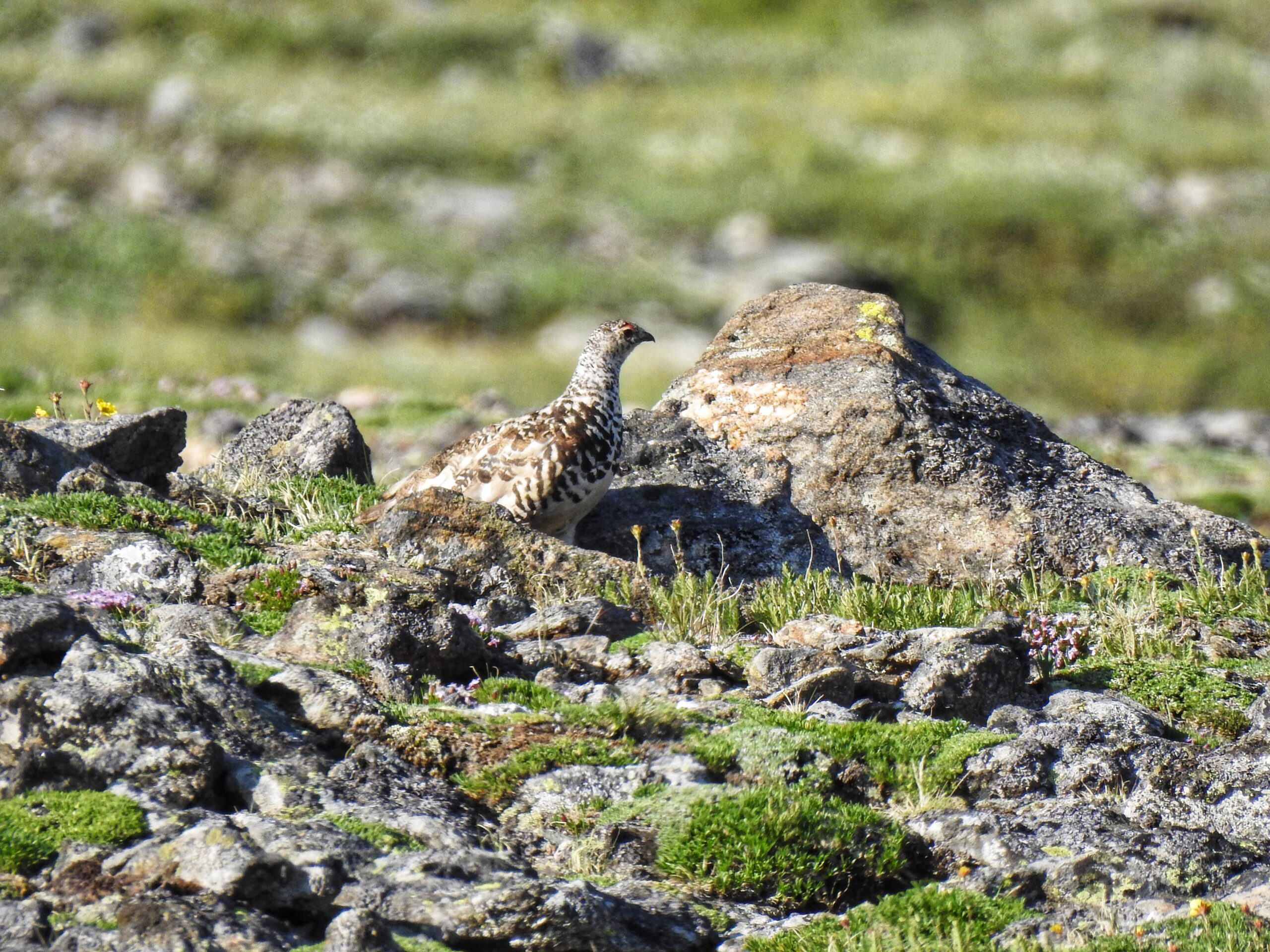 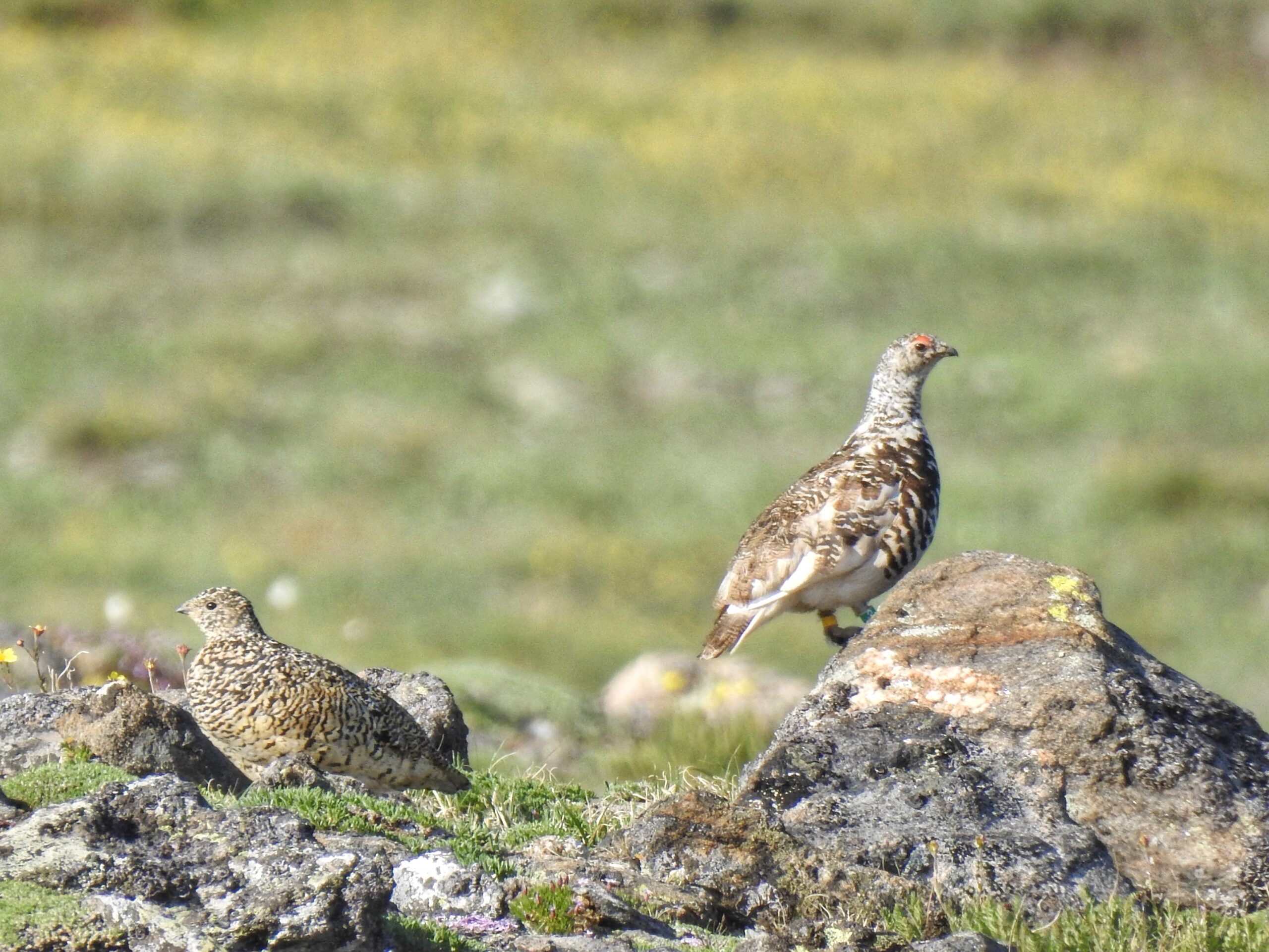 Both of pair are in this photo—really! 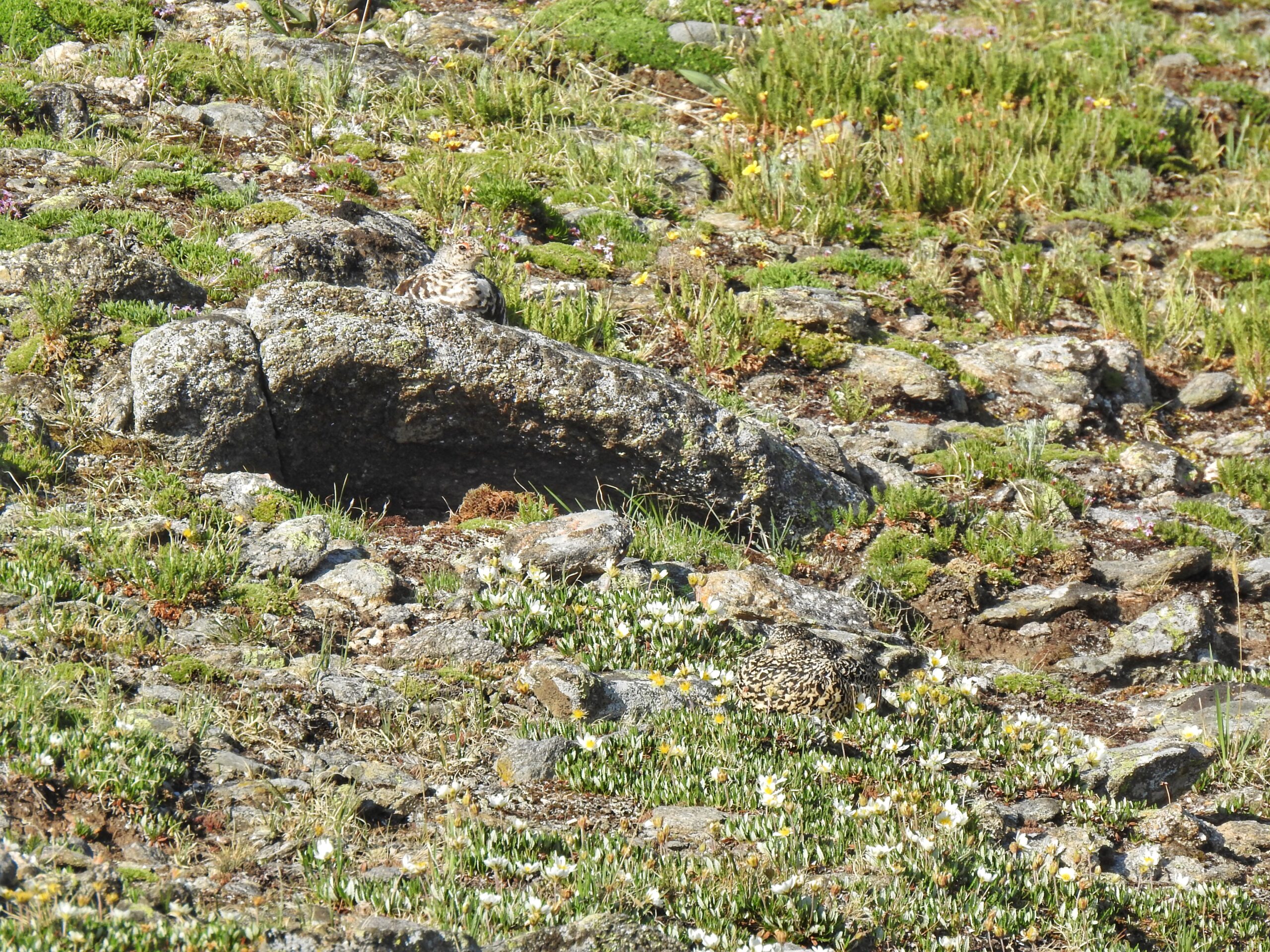 Another look at the female hiding in plain sight 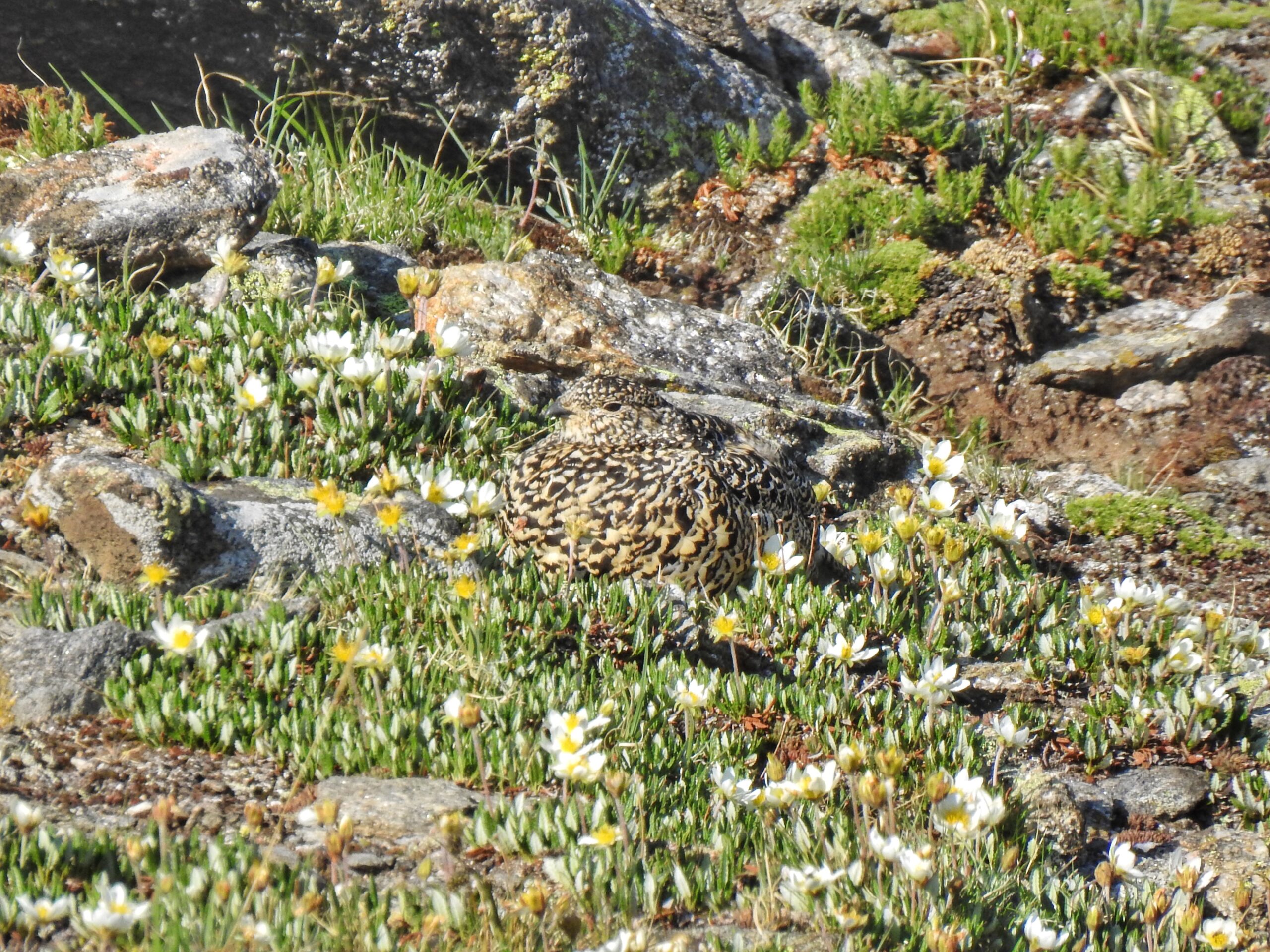 Just before I left, the male wandered over to a patch of white and yellow flowers and began eating them. He then settled down and sat still. This was my final view. 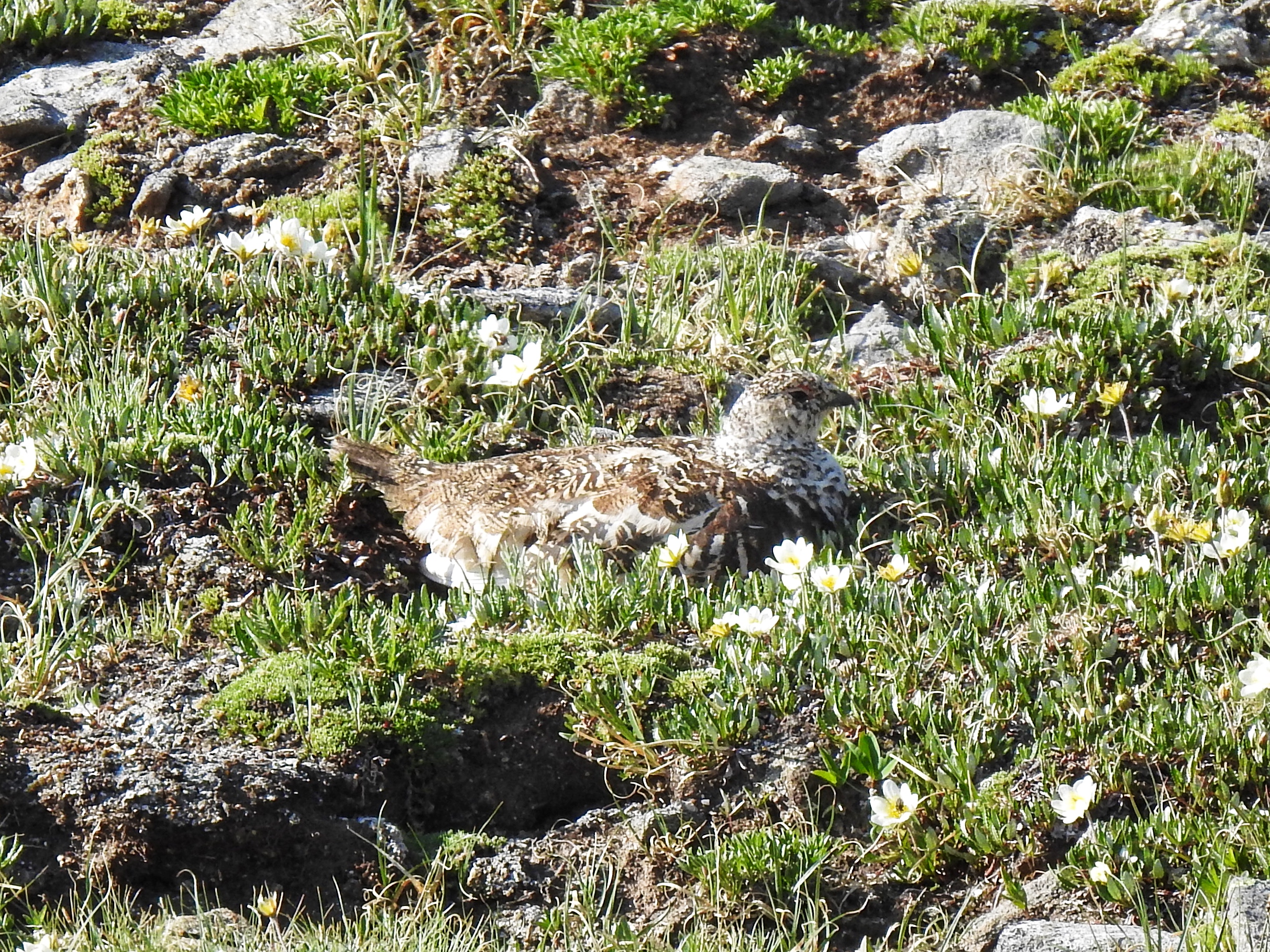 I’m not sure if I saw four or five total. I know two males were chasing a female near the top of the ridge while another female was hunkered down much closer to where I stood. But later, one of the males flew halfway down and when I looked through my binoculars, he was with a female. Either that was a fifth bird, or the female from the earlier chase flew down when I wasn’t looking. The two guys said they’d seen three males, so maybe there were six around all together.

After the guys left, I had the trail and the ptarmigans to myself for about half an hour. Then another birder showed up. I pointed out the birds and he set up a microphone to try to catch some audio (which I did in at least one scene in the video below). He was still there when I left.

Here’s a shot of the mountainside where all the action took place. The ptarmigans are in that shot somewhere. 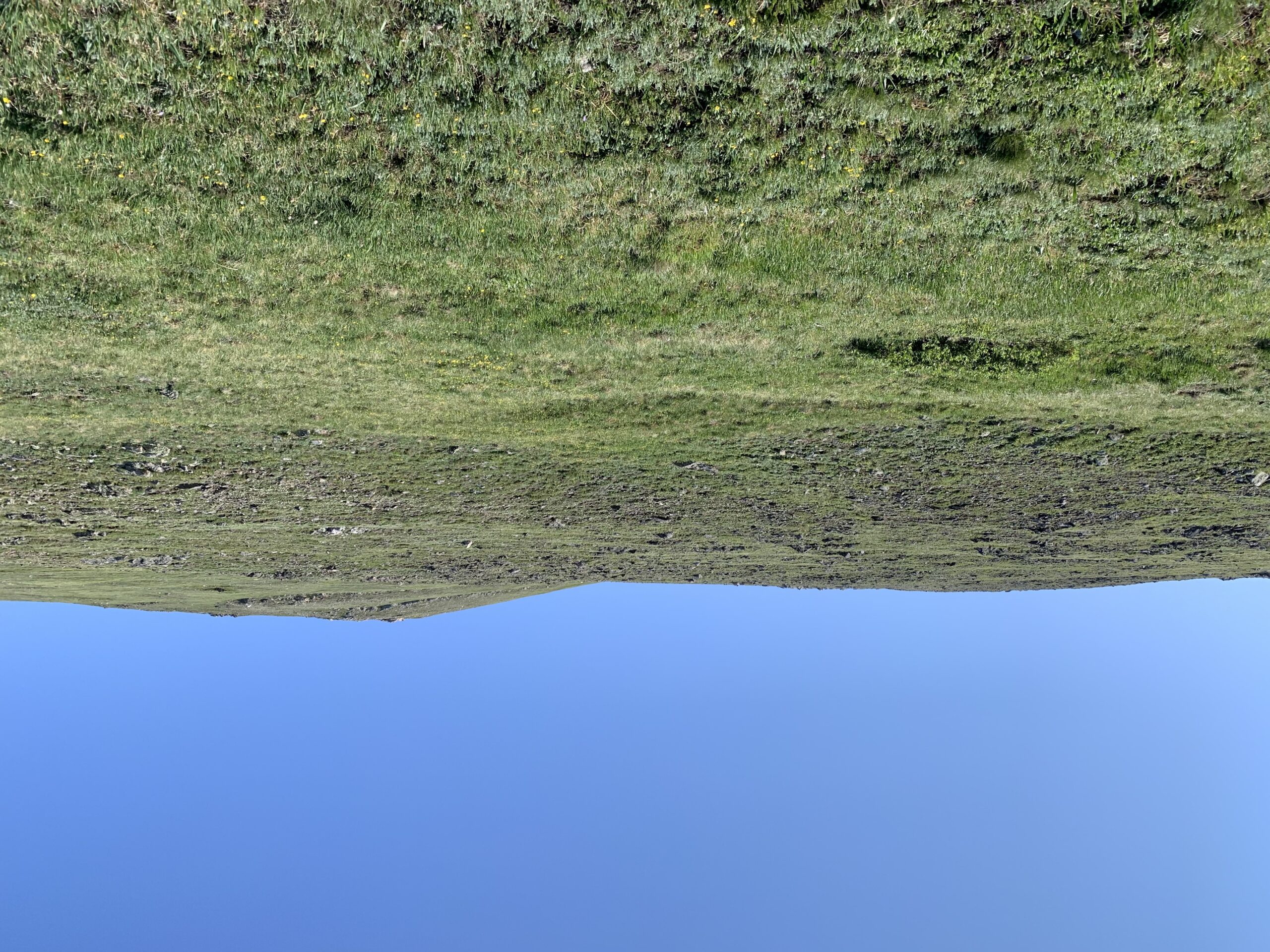 Here’s a wide panorama of the entire area. I first saw them just downhill from that little pond.

The greater part of the White-tailed Ptarmigans’ range is from northern Washington and Montana up into Canada. Scattered populations live on the highest peaks from extreme southern Wyoming to northern New Mexico. In the winter, they turn absolutely white. I saw them in their summer plumage. In spring and fall, they are often a mix of the two. Whatever the plumage, I think they’re beautiful birds. In winter, they often head down to timberline, among the willows. When I first saw them this morning, they may have been headed uphill from a patch of low evergreen bushes where they’d spent the night, but that’s just speculation.

I’d never gotten up as early as 3:45 to bird before. It made for a very long day, but I didn’t seem likely to see the ptarmigan any other way. It was worth it.

Here’s some of the action on the hill in slow-motion, giving you an idea of how intense it was and how much more durable birds are than they look like they ought to be.