This was another bird I’d been tracking on rare bird reports for the past couple months. A pair of Lucifer Hummingbirds was being seen at a tiny bird sanctuary that used to be some woman’s yard. When the woman died, the Southeastern Arizona Bird Observatory bought the place. Volunteers keep the feeders filled and answer questions. It was only a little after 10:00 when I arrived, but I’d already been up for six hours to get my tire fixed in Douglas. I was tired and needed something good to happen.

A guy came out into the parking lot and greeted me. He gave me an orientation speech pointed out the feeders where the Lucifer Hummingbird usually showed up. He said it often fed on the flowers on a nearby ocotillo too. I found a spot on a bench in the shade and waited. A van full of birders on a guided tour from Delaware came a short while later and filled the other seats in a semi-circle around the feeders. I chatted with them some—particularly with a Black woman from Philadelphia who noticed that I had a similar camera and considered that a good reason to be my friend. It was a good enough reason for me too. She likes birds, but mostly just travels all over the world because she can. I ran into her (and her tour) in Patagonia two days later and then in the Santa Rita Mountains the day after that. We always said hello and checked up on how each other’s weeks were going. She said the tour had actually be in Rucker Canyon to see the Tufted Flycatcher just a couple minutes before I got there the day before.

I was the one who first noticed the bird. The male was feeding on the ocotillo flowers and gave me good looks. It hung around for a couple minutes. 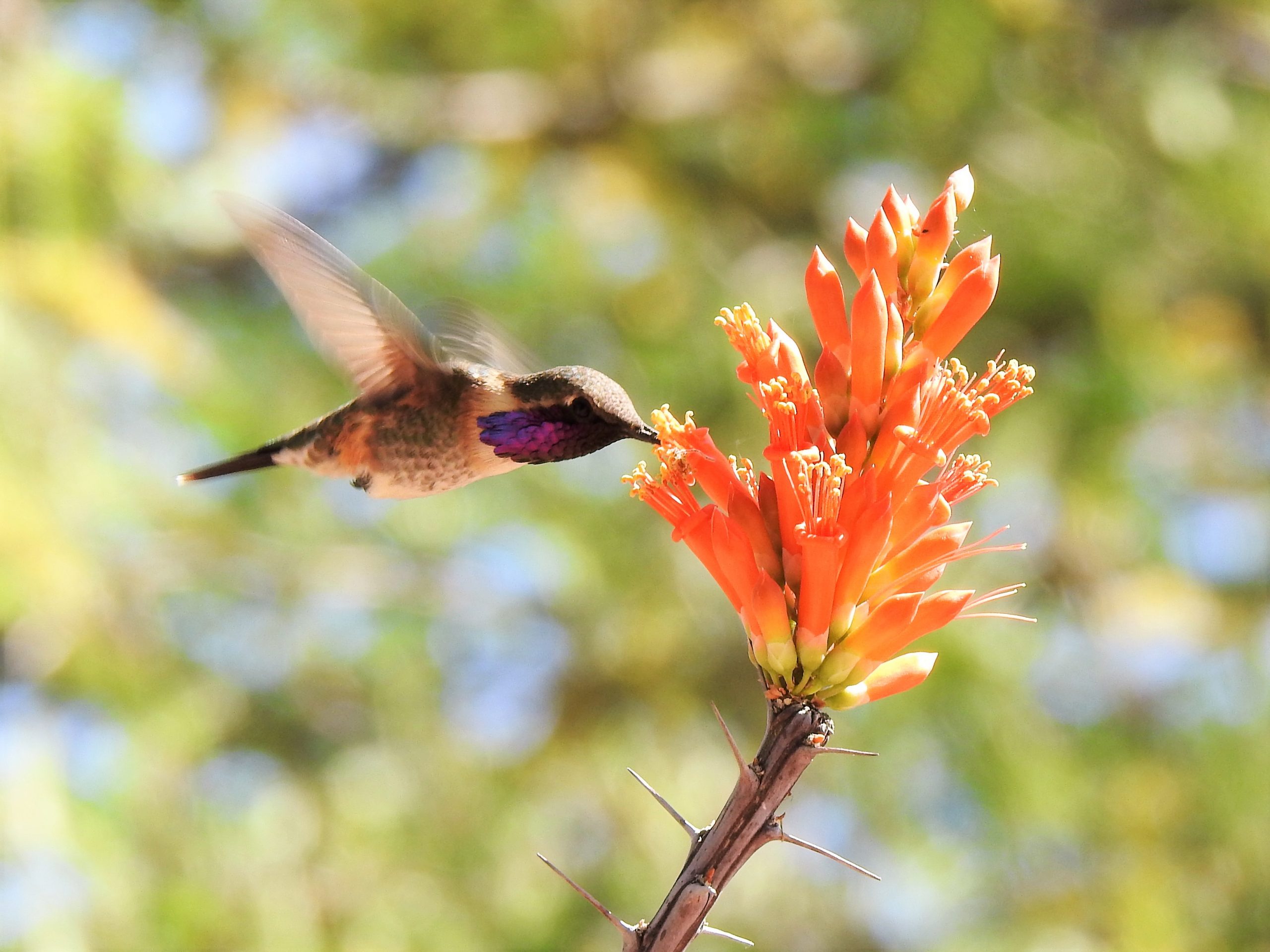 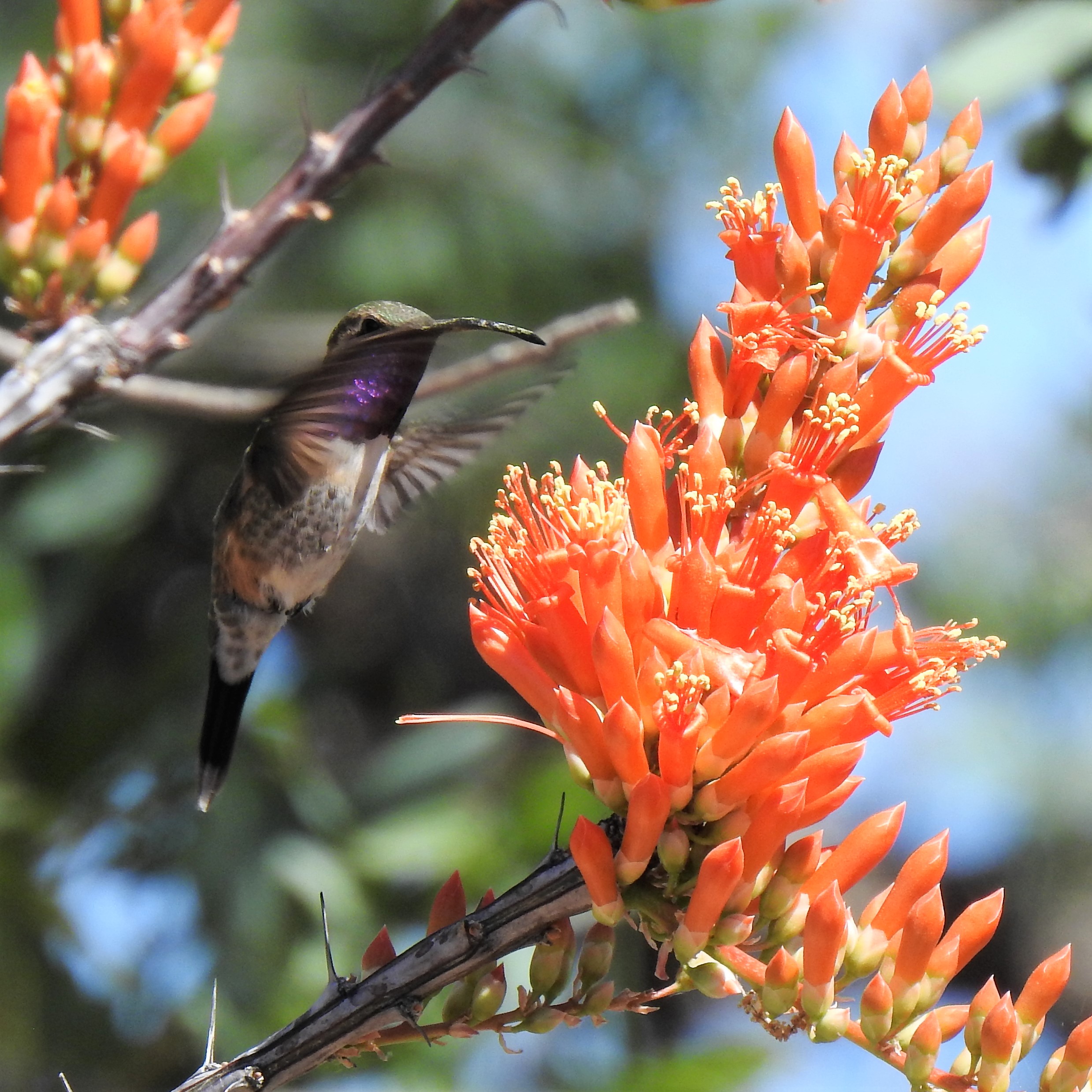 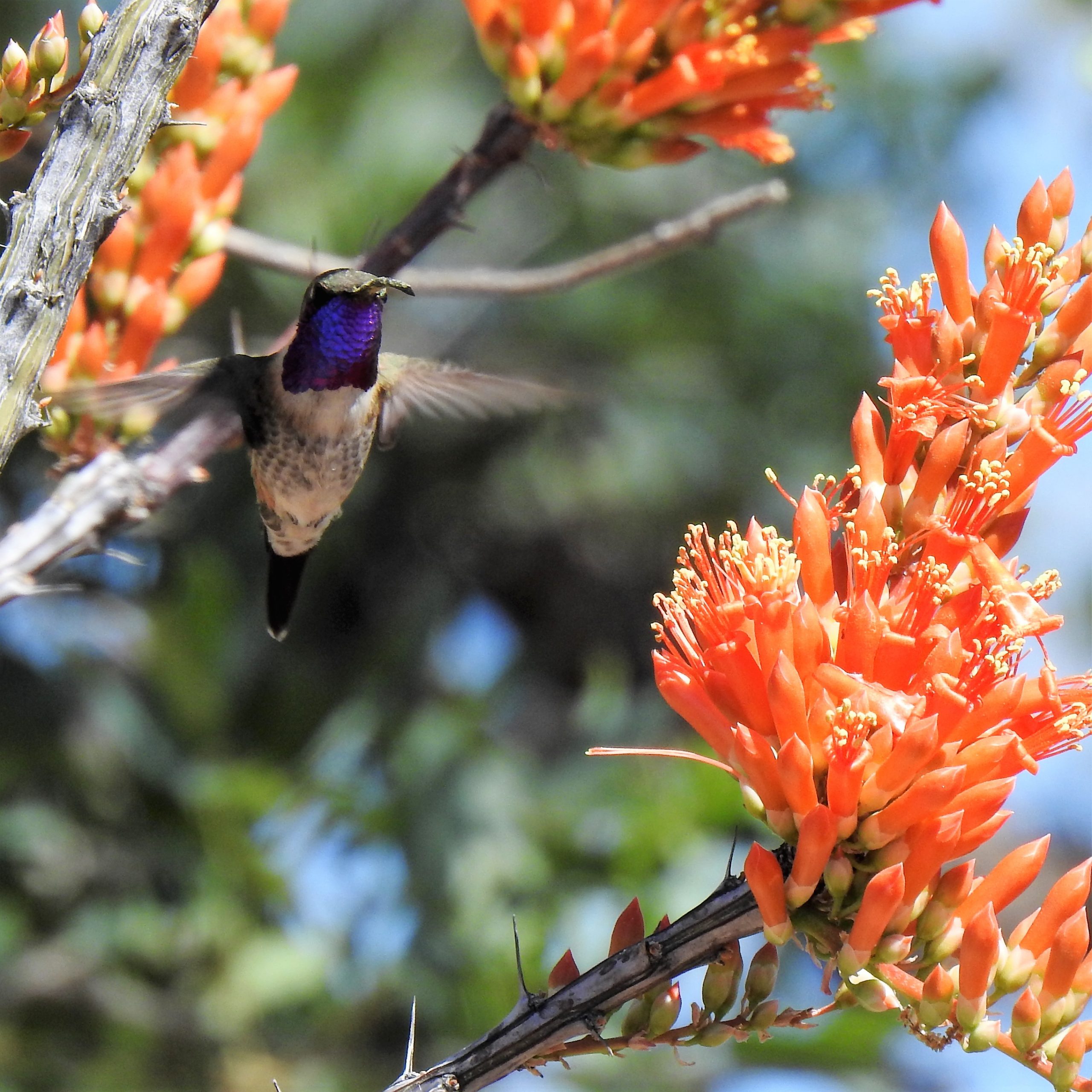 Later, both the male and the female came to the feeder. The key field marks are its small size, long purple gorget, and long bill. 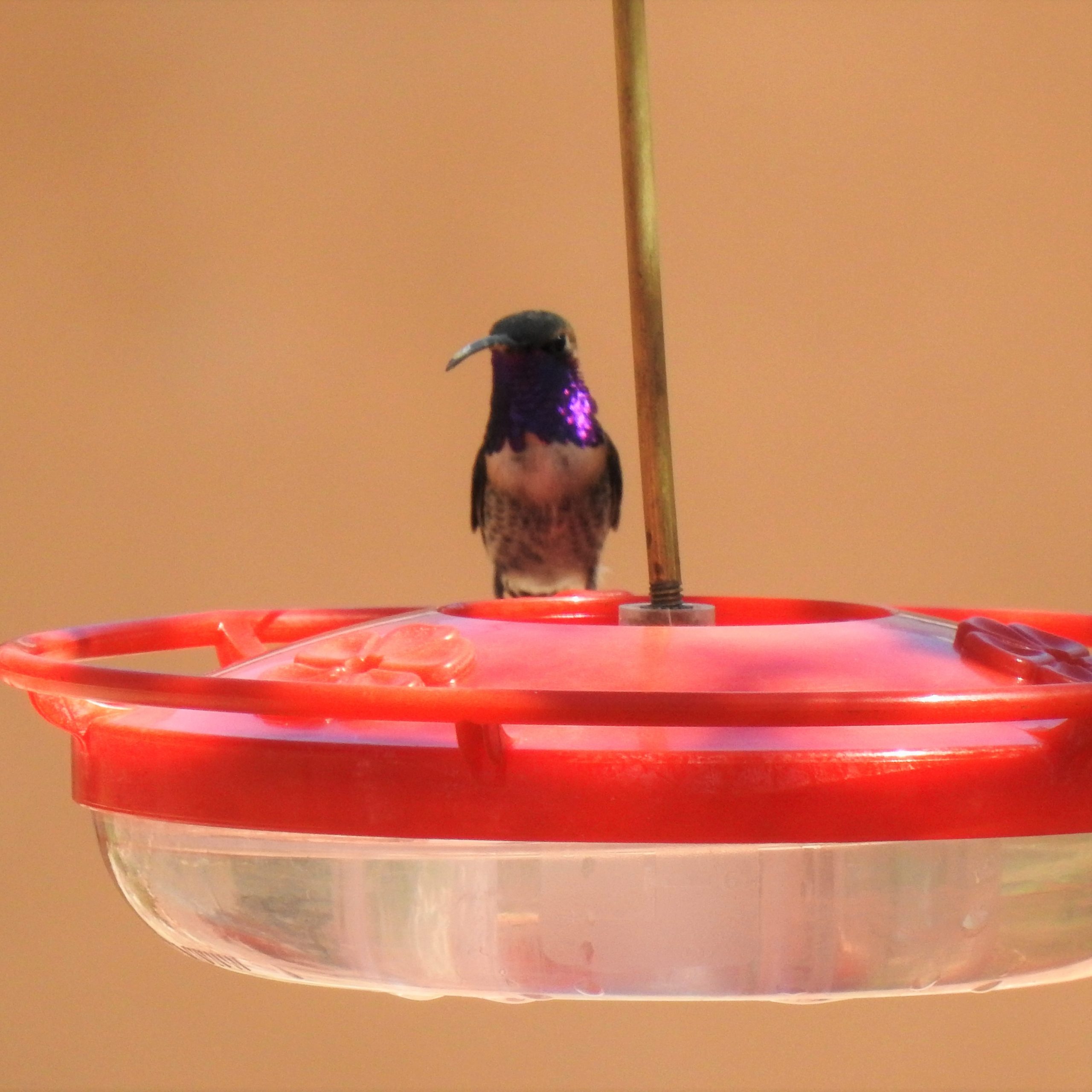 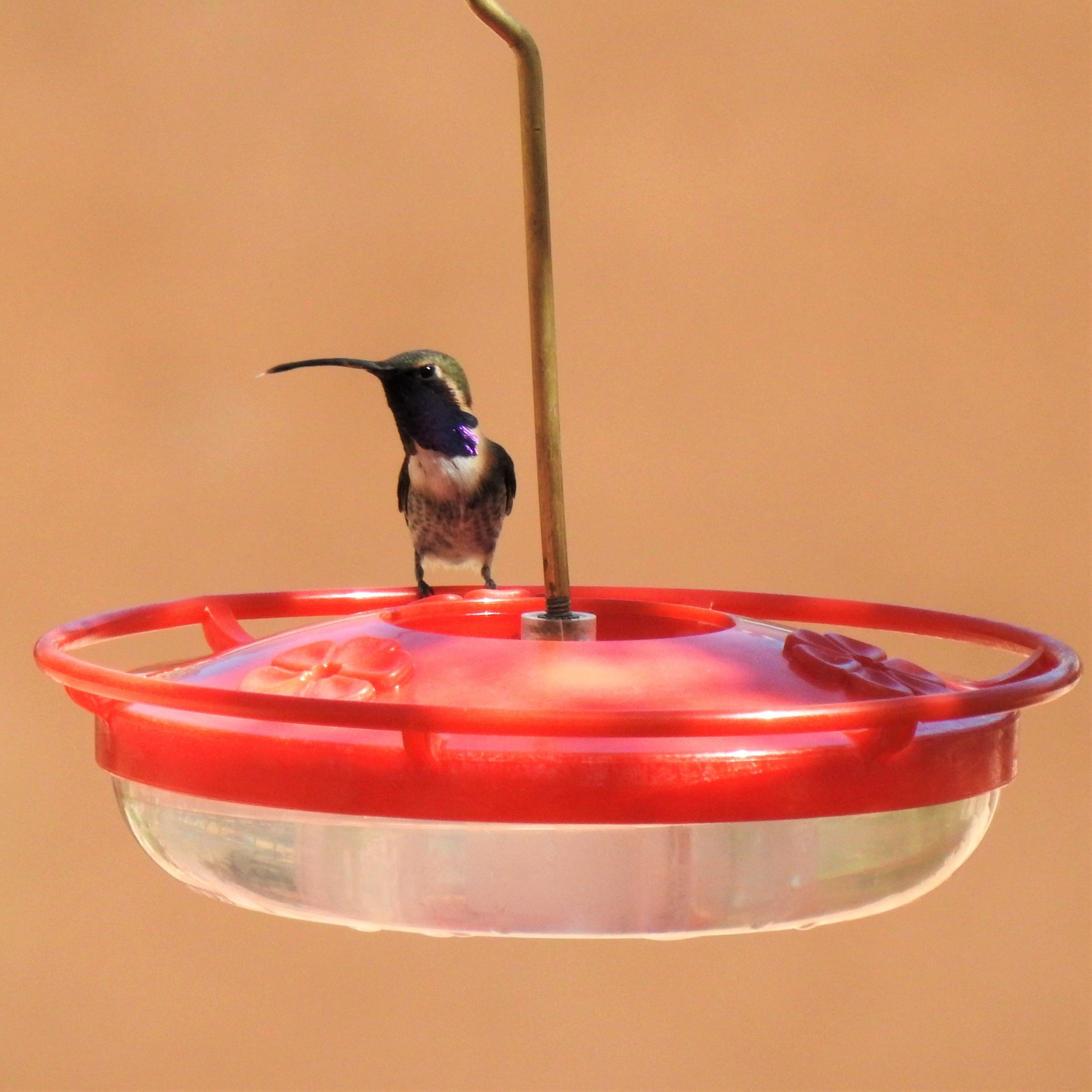 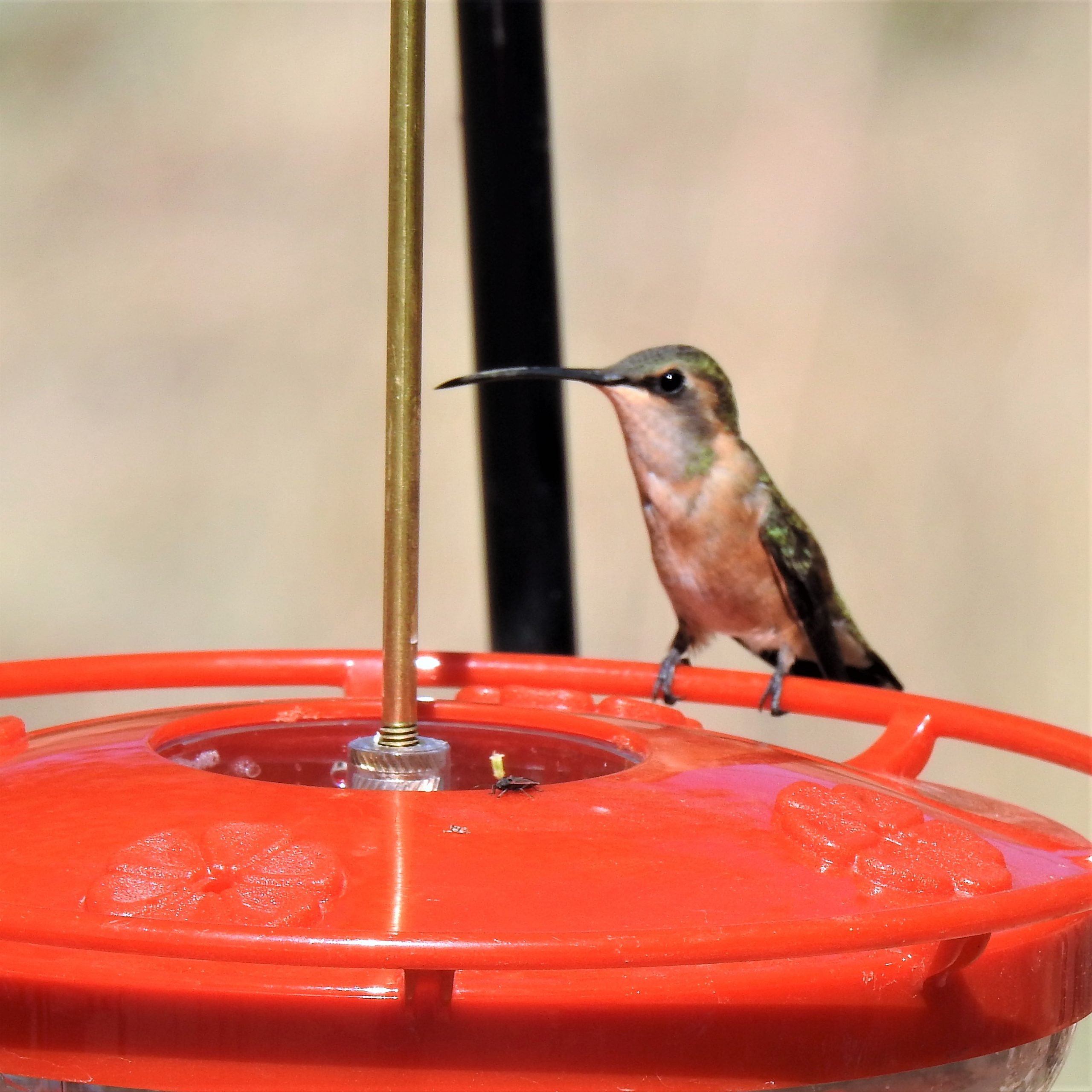 Another tidbit from the visit. There are no signs before you get to the parking lot. The road splits and I chose the fork that led to a building with three cars parked out front. I’d only gone a short way when I could see a small parking area at the end of the other drive. I found a bare spot and turned my car around. As I parked my car at the refuge, some guy from the first house walked over and said “We get a lot of birders pulling into our drive and we prefer that they back out rather then turn around.” I was nice and apologized but said that there were no signs, I’d never been there before, and was unlikely to ever be there again. He said “I hope you do come back because it’s a beautiful place and I’m a birder myself. Just remember next time to back out instead of turning around.” By this time I realized the guy was a condescending moron who liked to hear himself talk. I’d already apologized and said I’d never be back, but he had to give me his speech. But here’s the thing … if I ever did go back, why would I pull up the wrong drive again? And if he’s concerned, why doesn’t he put up a sign saying “private drive” with an arrow pointing to the sanctuary? Weird dude. When the volunteer came out to greet me, I said I’d hoped I hadn’t caused any problems because of the guy. The volunteer just scoffed to indicate that it was no big deal.