For a couple months before I headed to Arizona, I checked the U.S. rare bird report almost every day to see what rare birds were being seen in the Portal-Patagonia area. Since it’s so close to the border, Mexican species regularly wander into the U.S. One that seen consistently this spring is the Tufted Flycatcher. It was out of the way and would take an extra effort to see it—a 20-mile drive south of Rodeo, then 20 miles back north on a dirt road into the National Forest. When I got to Rodeo, I hadn’t made up my mind.

On Thursday, Friday, and Saturday, I got in conversations with other birders. Several of them asked if I’d seen the Tufted Flycatcher yet and encouraged me to go for it. I explained that I just had a sedan and wasn’t crazy about 40 miles on dirt roads. They all assured me that the road was fine, and a couple of them said they’d done it in their cars. You can probably guess how this is going to end.

After seeing the Crissal Thrasher, there were no likely lifers left to hunt in the Rodeo/Portal area. I decided to go for the flycatcher.

The dirt road into Rucker Canyon crossed about nine miles of flat desert, which wasn’t too bad. It then wound its way up into the Chiricahuas. It wasn’t in a big hurry to get anywhere—and apart from the road itself, there was little sign of civilization. I would have been much more confident in an SUV, but I’ve taken my car on worse roads. Just not often 20 miles of them in the middle of nowhere.

I made it to the stakeout for the flycatcher. Two guys were standing there peering up into the trees and showed me the bird as soon as I arrived. We got to chatting and they were very friendly. They were from Canada and were camping in the area. The flycatcher was high in a tall tree when I got there, but soon flew across the road to a lower branch in the shade and stayed in that general area for about half an hour. It kept flitting out and returning to the same branch. 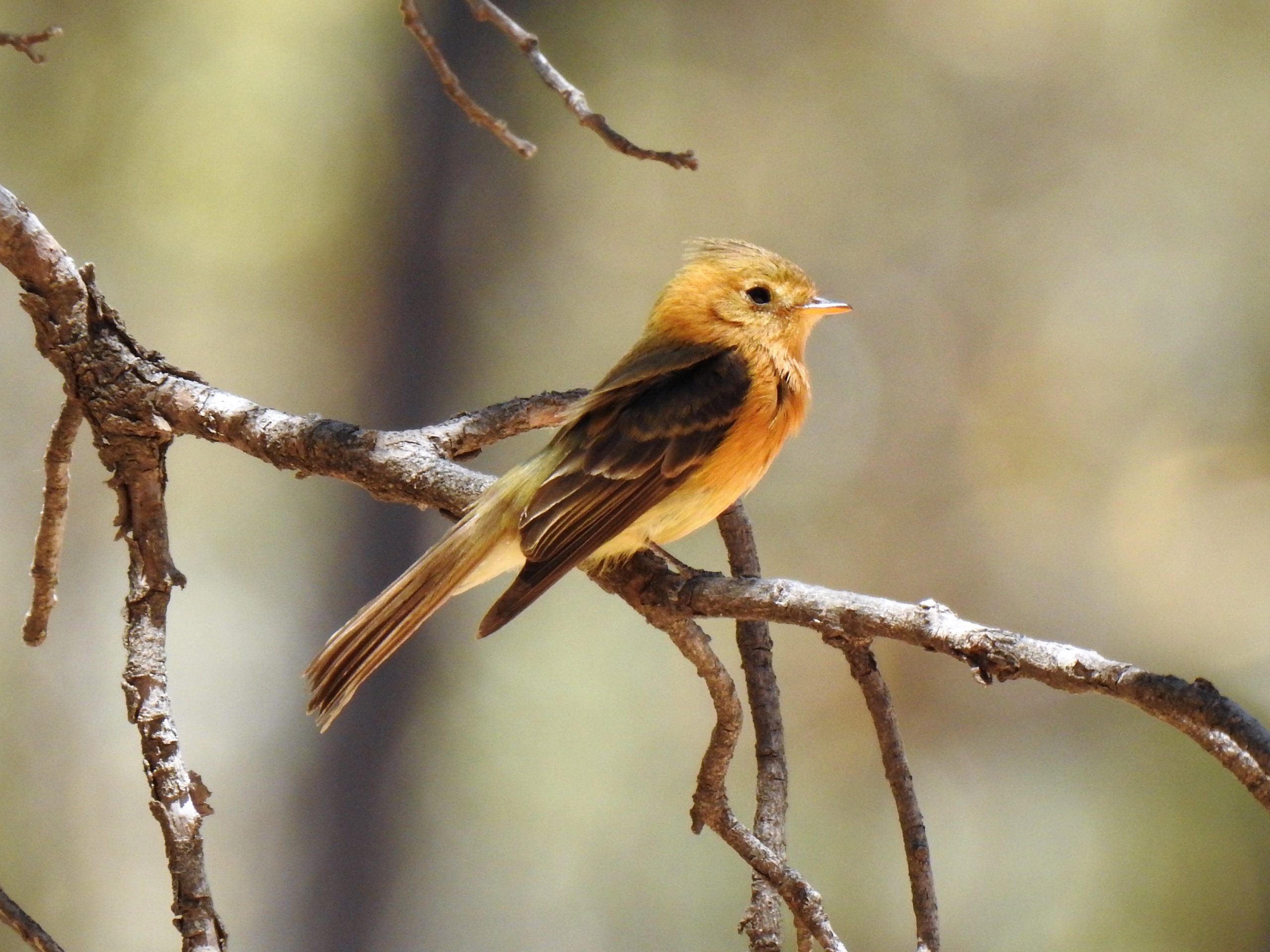 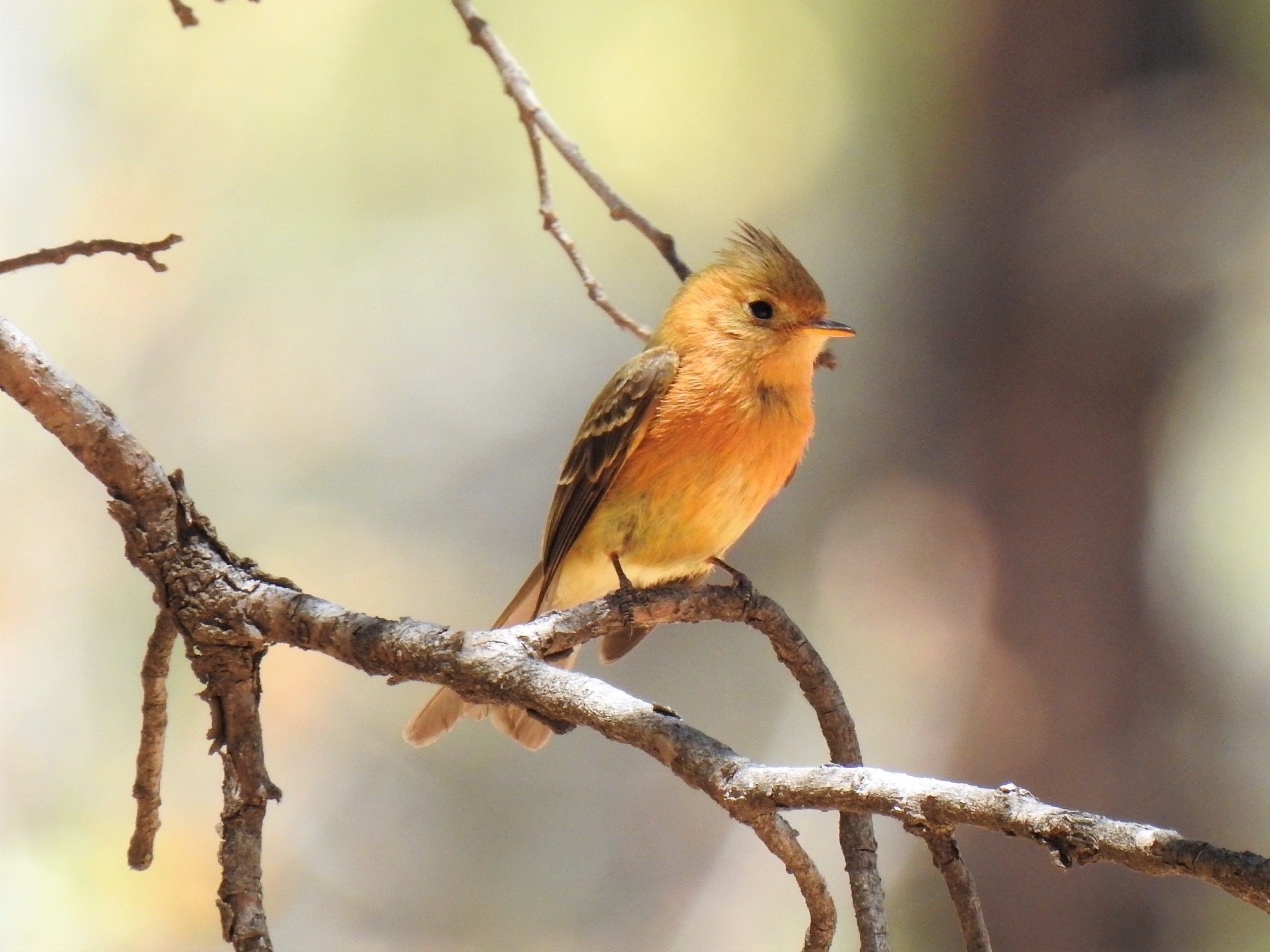 It looked like an empidonax flycatcher but was a bit smaller, with a larger crest, a forked tail, and a buffy yellow wash all over.  If I understand correctly, it’s actually nesting in the area. 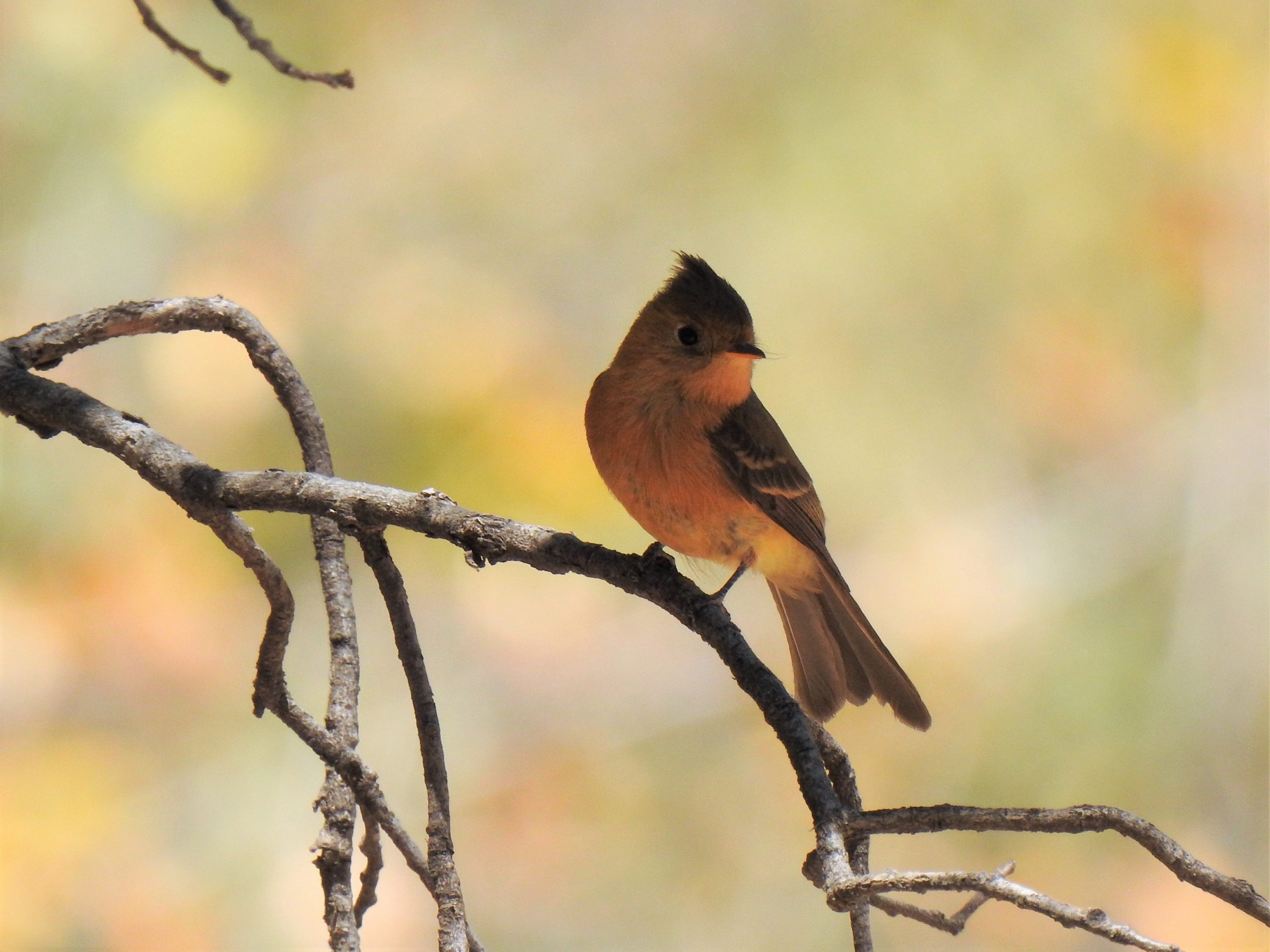 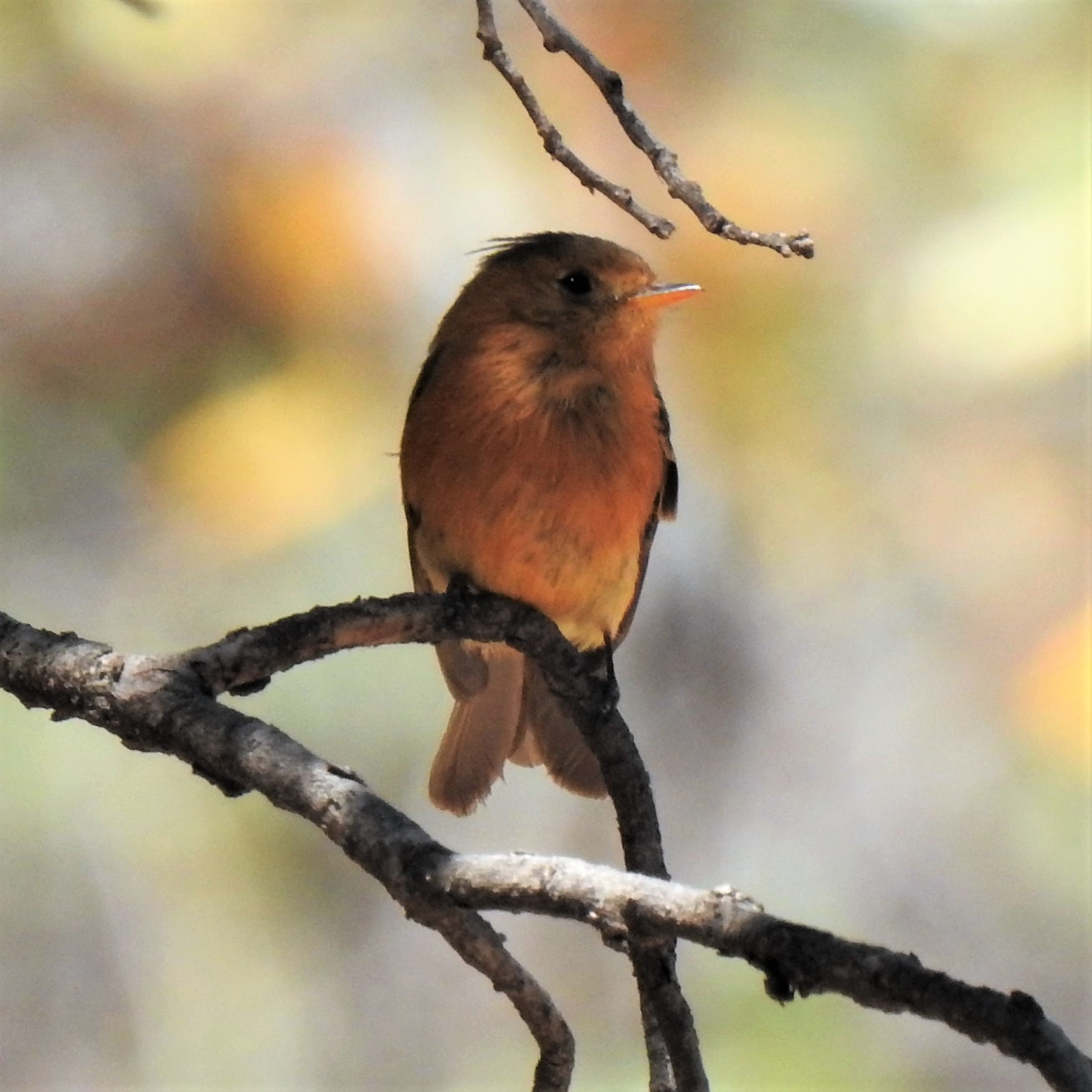 Two other birders—not very friendly ones—showed up. We pointed out the flycatcher. Shortly thereafter, the bird crossed the road again and worked its way through the trees along a creek. The two Canadian guys said goodbye and wandered up the road to look for a lake. I sought out some other birds singing in the area—Painted Redstart, Plumeous Vireo, Grace’s Warbler.

I headed the 20 miles back along the dirt road. I was probably driving faster than I should have been, although I don’t know if that’s what caused my problems. At some point, I punctured a tire. Because the road was gravel, I’m not sure when it happened. Just before I got back to the pavement, I slowed down to look at a Horned Lark, and that’s when I noticed the thumping noise. I said out loud, “I do NOT like that noise.” I pretended it was just the gravel road and kept going onto the pavement, but it soon became apparent that something was wrong. There was little shoulder, so I pulled over as far as I could and got out. My right rear tire was flat. I’d been riding on the flat for some time, and the walls of the tire were almost worn through. I don’t know why I didn’t destroy the rim, but it was fine.

There were no buildings of any kind in view. There were no cars on the road. I was isolated. It was dry and windy and felt very remote. The nearest hint of civilization was Rodeo. That was 20 miles away and had no gas station.I pulled out the donut spare and the jack and went to work changing the tire. After five minutes or so, a camper pulled over a guy—who also happened to be from Canada—walked back and asked if I had everything I needed. I said I thought I did but I wasn’t sure about the pressure in my spare. I’d never used it before. He said he had a gauge and a pump and walked off with my tire. As it turned out, it had about 35 lbs. of pressure and should have had 60 lbs. I probably would have been OK, but it was nice to get it filled to the right amount, and it was nice to not be quite so alone. The guy stuck around to make sure I got the spare on before leaving. I thanked him heartily. I was on my way about 20 minutes after I’d pulled over. In that time—in addition to the camper—only two cars had passed. 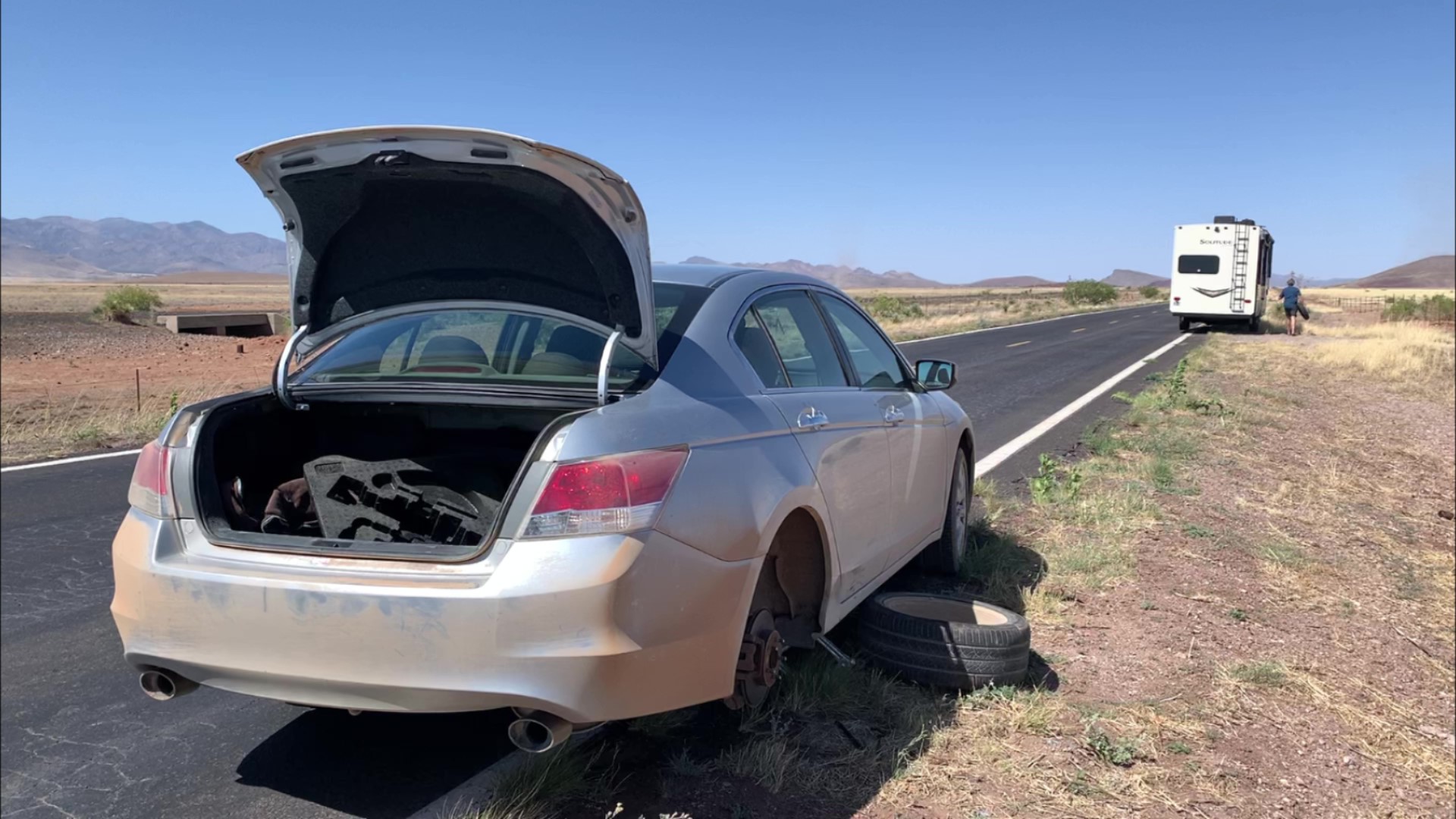 To finish the story, the owner’s manual recommends not driving more than 50 mph on a donut or going more than 70 miles. I went 20 miles just to get back to my cabin. I checked in Sierra Vista for tire places and discovered they were all closed on Sunday. I did find a Walmart in Douglas, 68 miles away, that was open at 7:00 on Sundays and had an auto center. The next morning I got up at five and drove at 45 mph to get there when it opened. I forgot that Arizona doesn’t observe daylight savings time, so I arrived at 5:45 and had an hour-and-fifteen minute wait. Actually, it was closer to an hour and thirty minutes because the place didn’t open when it was supposed to. But they had my size tire, I was the first customer of the day, and by 8:05 I was on my way, $119 poorer. All things considered, that could have gone much worse.

Was the flycatcher worth it? I know I wouldn’t have bothered chasing it if I’d know what would happen. But I survived, I saw another life, and I have a story.